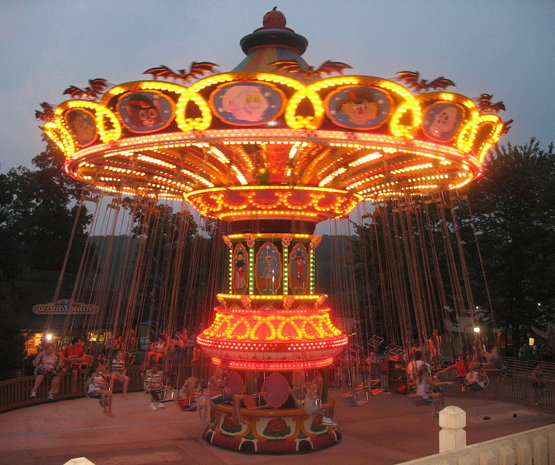 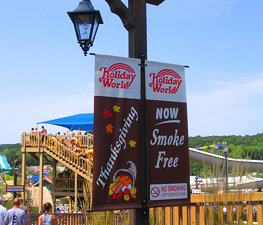 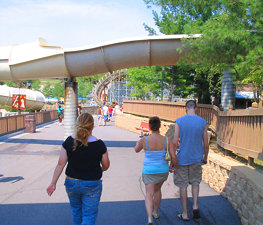 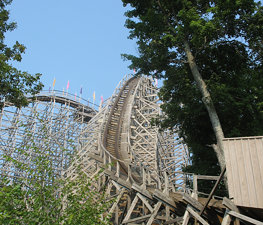 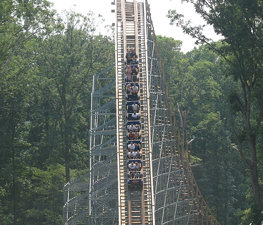 Holiday World opened on August 3, 1946; it was founded by Louis J. Koch under the name Santa Claus Land. Holiday World was the first themed amusement park in the world, preceding Disneyland by nine years. The park had rides and activities for children and their parents. It was a small park themed around Santa Claus and Christmas. The park still remembers Santa Claus with a large statue at the entrance of the park; it includes a large Christmas Tree and Nativity Scene as well.

In 1984, in order to appeal to a wider age group, the park expanded to include Halloween and Fourth of July sections, and the park's name was changed from Santa Claus Land to Holiday World to reflect the emphasis on additional holidays. Frightful Falls, a log flume ride, was added in 1984. As the park's name changed, so did the names of some of the rides, to reflect the new holidays. For example, the round-up ride called Arctic Circle became known as Roundhouse and later Revolution in the new 4th of July section.

Holiday World gained national attention in 1995 when wooden roller coaster The Raven opened at the start of the park's 50th season. It has been rated as the first, second, and third best wooden roller coaster on the planet by Amusement Today[] and Inside Track[] magazines and continues to be named a top-10 wooden coaster in the Golden Ticket Awards given out annually by Amusement Today.[]

Additional water slides and attractions were added to Splashin' Safari in the following years.

The wooden roller coaster The Legend opened in 2000 for the park's 55th season. It has consistently been rated in the top dozen wooden coasters in the Amusement Today Golden Ticket awards.[] This was also the first year for the parks' popular free soft drinks program.

In 2006, Holiday World added the Thanksgiving section and additions to Splashin' Safari for its 60th Anniversary. This marked the largest expansion ever for Holiday World and cost over US$13 million. These additions included a new wooden roller coaster, The Voyage. It won the Best New Ride Golden Ticket Award for 2006.[] On September 13, 2006, the park's owner Will Koch taped a segment for The Colbert Report pitting Santa Claus against Abraham Lincoln, another historical figure with ties to southern Indiana. The park's 60th season concluded on October 8, 2006, park broke its all-time attendance record as more than one million visitors came through the gates that year.

In 2007, a $4.5 million expansion included Bakuli, a ProSlide Behemoth Bowl water slide, in Splashin' Safari and Turkey Whirl tilt-a-whirl in Thanksgiving. Also that year, The Voyage was given the Best Wooden Coaster award at the Golden Ticket Awards[] and the park once again had over one million visitors pass through its gates which broke the attendance record set the previous year.[]

In 2008, a $6 million expansion included Kima Bay in Splashin Safari as well as the Star Spangled Carousel in Fourth of July and the Reindeer Games spring ride in the Christmas children's area. The park also retained its crown of Cleanest & Friendliest park at the Golden Ticket Awards. The Voyage also remained the #1 Wooden Roller Coaster at the awards.

In 2009, a Shoot-the-Chute ride called Pilgrims Plunge was added. The ride's 131-foot drop broke the previous record for world's tallest water ride. Rather than the traditional sloped ride to the top of the tower, an open-air elevator lifts the 10-passenger boats. The Intamin Mega Splash ride is located in the Thanksgiving section and is also accessible from Splashin' Safari.

Wildebeest will begin with a conveyor ride up the water coaster’s lifthill. Following the four-story drop at a 45-degree angle, linear induction motors (LIMs) will propel the four-person rafts up seven additional hills, through three tunnels (two of them underground) and around a helix. Its top speed will be 24.5 mph. Wildebeest’s tallest elevation is 64 feet higher than its lowest drop; the conveyor-style lifthill replaces any slide-tower stairs.

Rather than sign licensed characters for the park, Holiday World has developed several mascots and characters including:

The Christmas section is at the entrance to Holiday World and is the oldest section. It includes a Christmas tree, the Applause fountain, a nativity scene, Rudolph's Reindeer Ranch (a collection of kiddie rides), Holiday Theater, as well as Kringle's Kafe. Since the park opened in 1946, Santa Claus has been available daily throughout the season to chat with children. He also invites children on stage with him at Santa's Storytime Theater.

The Halloween section includes the High Dive Theater which features daily high-dive shows, each ending with a high dive from 80 feet (24 m) into 10 feet (3.0 m) of water.

The Fourth of July section is the largest area within the theme park. This section features live music shows and the Betsy Ross Doll house, a walk-through attraction with a collection of antique dolls.

The newest section, the Thanksgiving themed section of the park premiered on May 6, 2006, to commemorate Holiday World's 60th anniversary. In addition to the rides below, this section also has a gift shop and Plymouth Rock Cafe.

Holidog's FunTown is a play area geared toward children, located on the east edge the Fourth of July section and encircled by The Freedom Train where the defunct Firecracker rollercoaster used to be.

Splashin Safari has the distinction of being the largest waterpark in Indiana, as well as one of the top water parks in the nation.

In 2005, Holiday World received the International Association of Amusement Parks and Attractions' Applause Award. Holiday World is the smallest park to ever receive the Applause Award. The park marked the award by installing a large version of the award (applauding hands) and commemorative plaques naming the other winning parks in the fountain located in the Christmas section.

Holiday World often plays host to weddings. In the park's history, couples have been married on The Voyage, The Legend, and, in 1995, a dozen couples simultaneously tied the knot on The Raven. Other couples have married in The Wave pool, on the park’s now defunct bungee jump, and in a Santa-themed hot air balloon over the park. During the 2008 season, a couple was married on the top of the Voyage lift hill by a professional Elvis impersonator.

Audra Englebright
This park is truly incredible! I'm there almost everyday, and I love every minute of it. Plymouth Rock cafe has to best food in the park! (Thanksgiving food) get chicken and dumplings!

????Laura
This park is great! The free Pepsi was so nice on a long hot day. No sunburns for us because we used the free sunscreen!❤️????

Ryan Dillman
Free soda and sunscreen. Check your local supermarket or credit union for discount tickets before you come. Early or late in the season you'll get the best weather and the shortest lines.

See all hotels See all
Baymont by Wyndham Dale

Wyandotte Caves, a pair of limestone caves located on the Ohio River

Marengo Cave is located in Marengo, Indiana. One of only four show

Jug Rock is a natural geological formation located outside of Shoals,

The Muhammad Ali Center, a museum and cultural center built as a

Six Flags Kentucky Kingdom, located in Louisville, Kentucky, was the 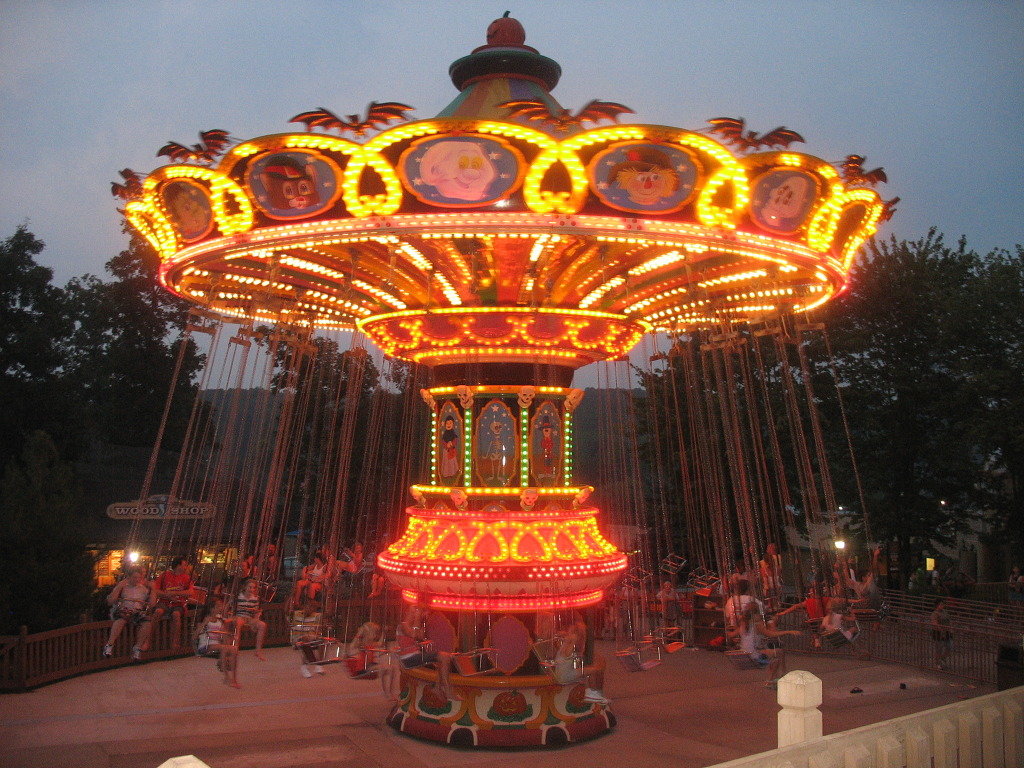 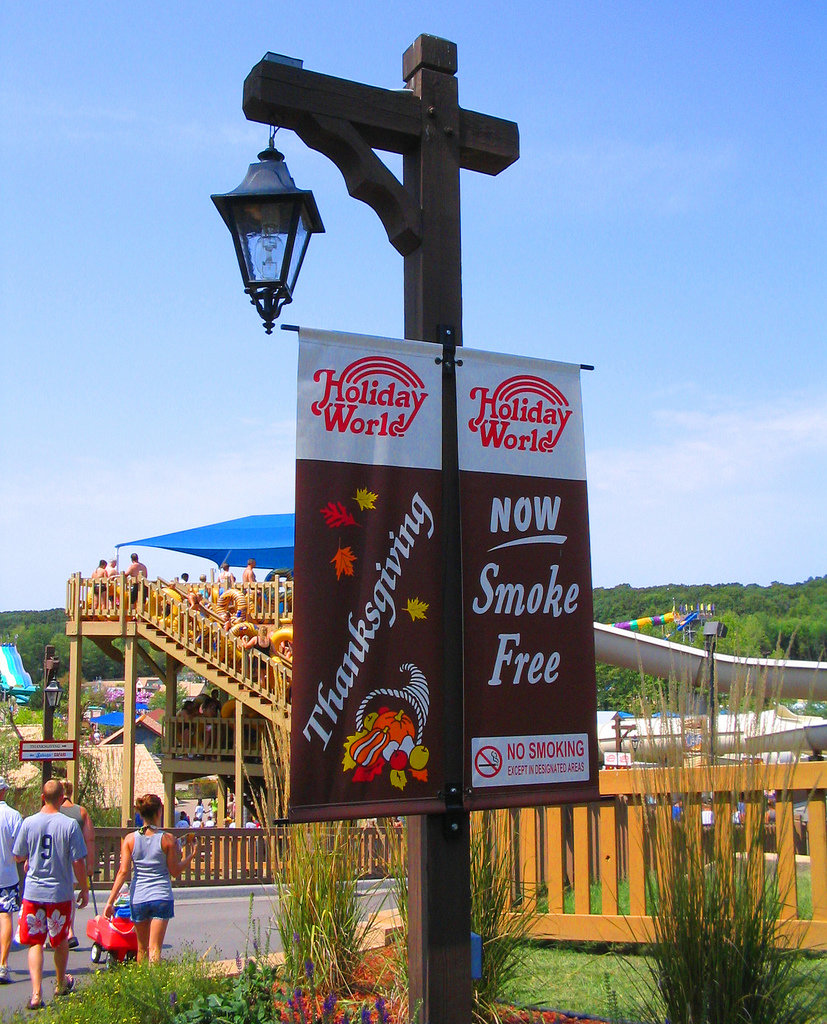 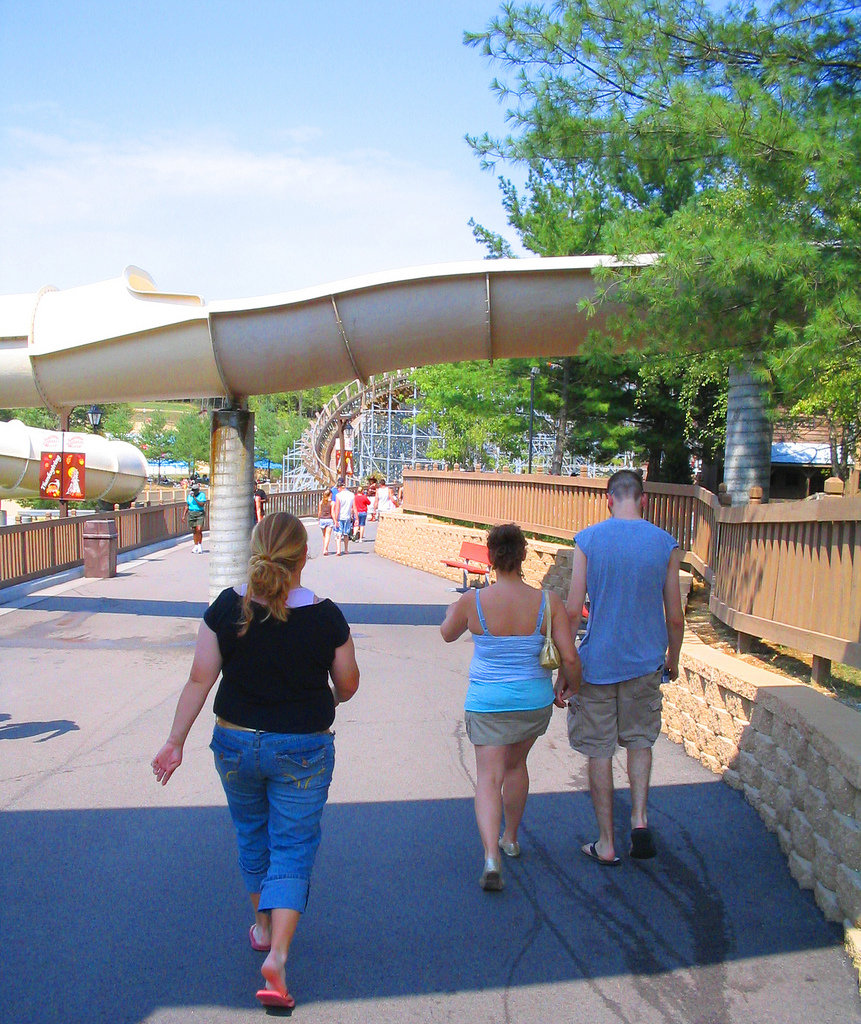 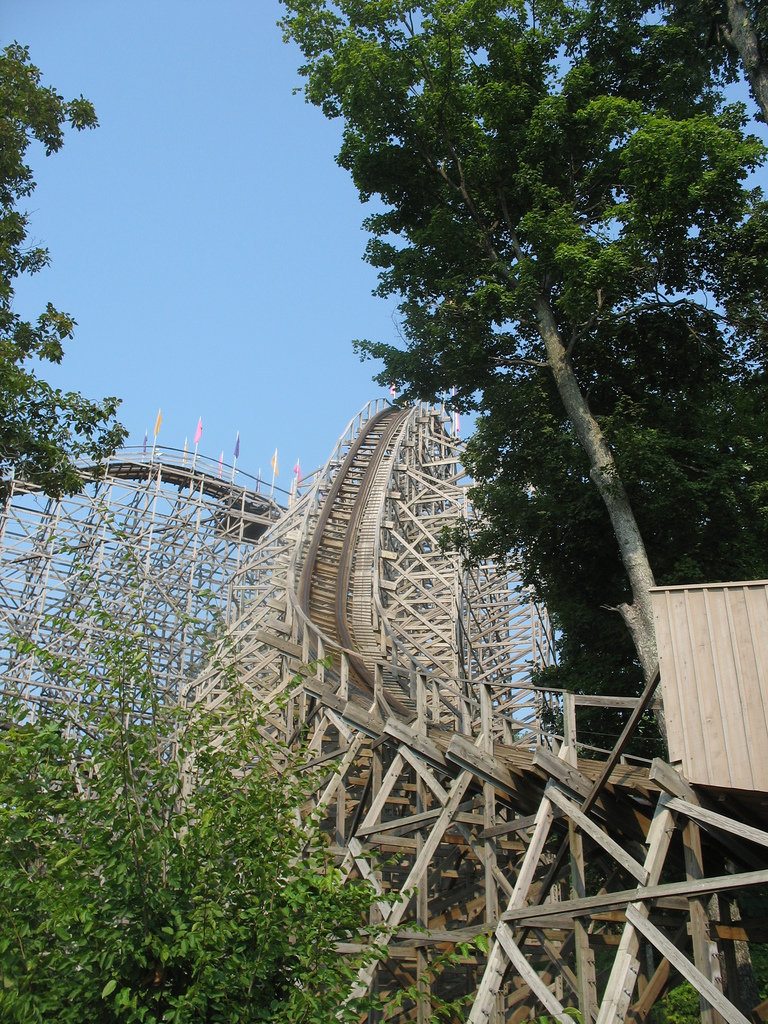 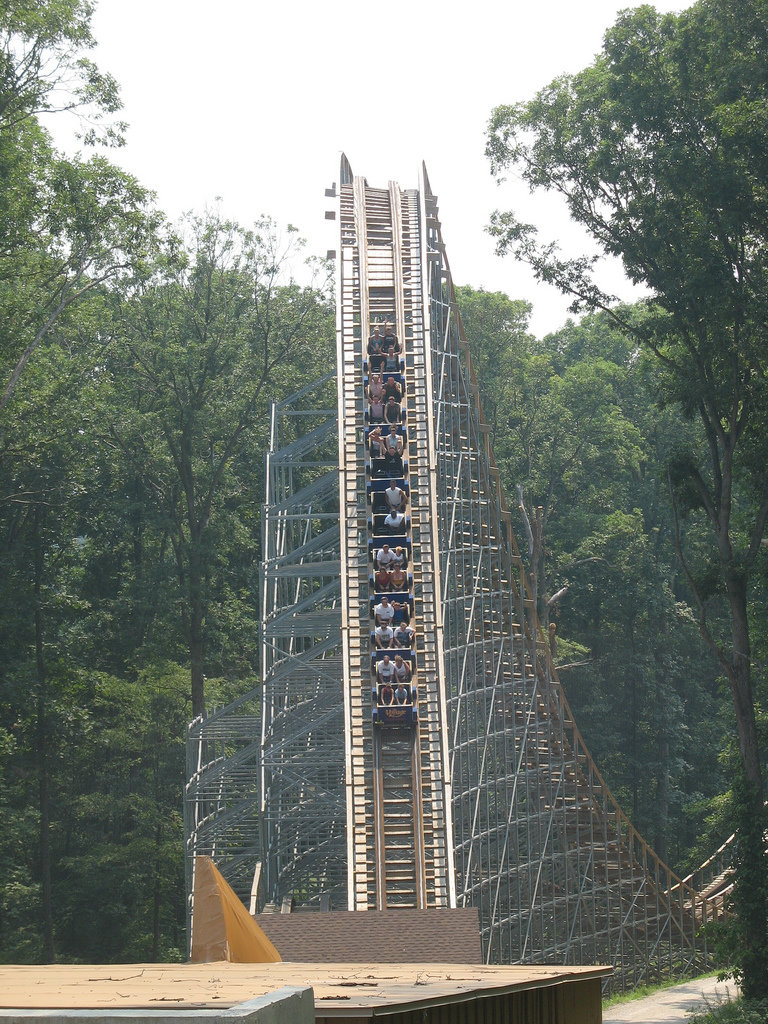 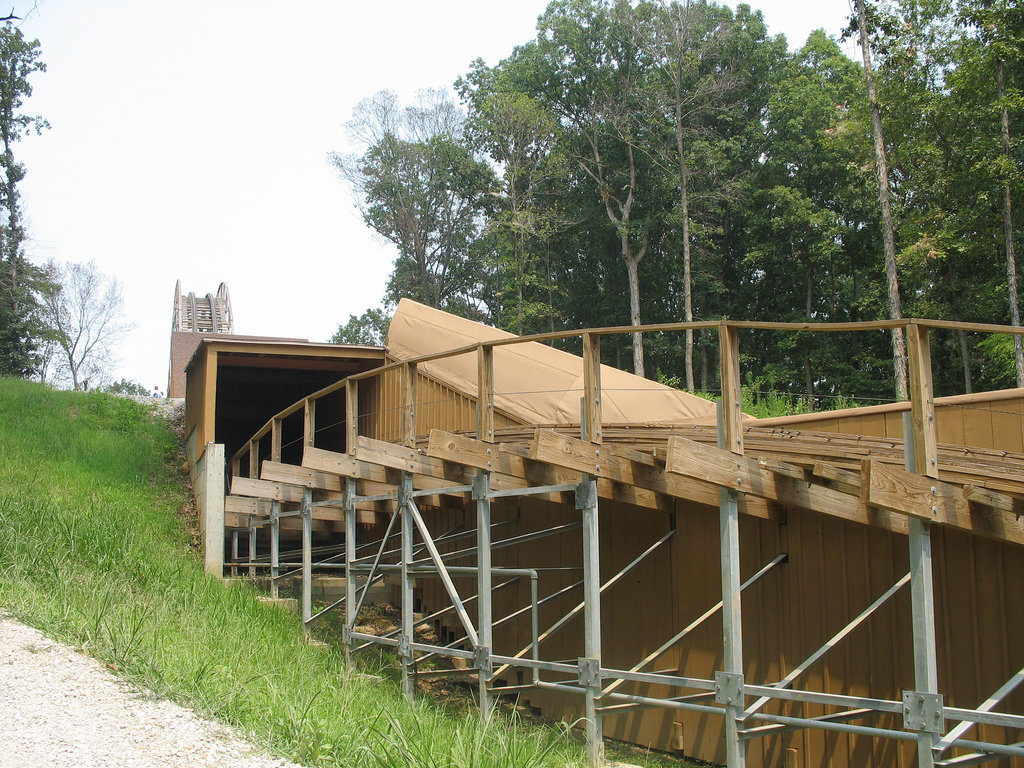 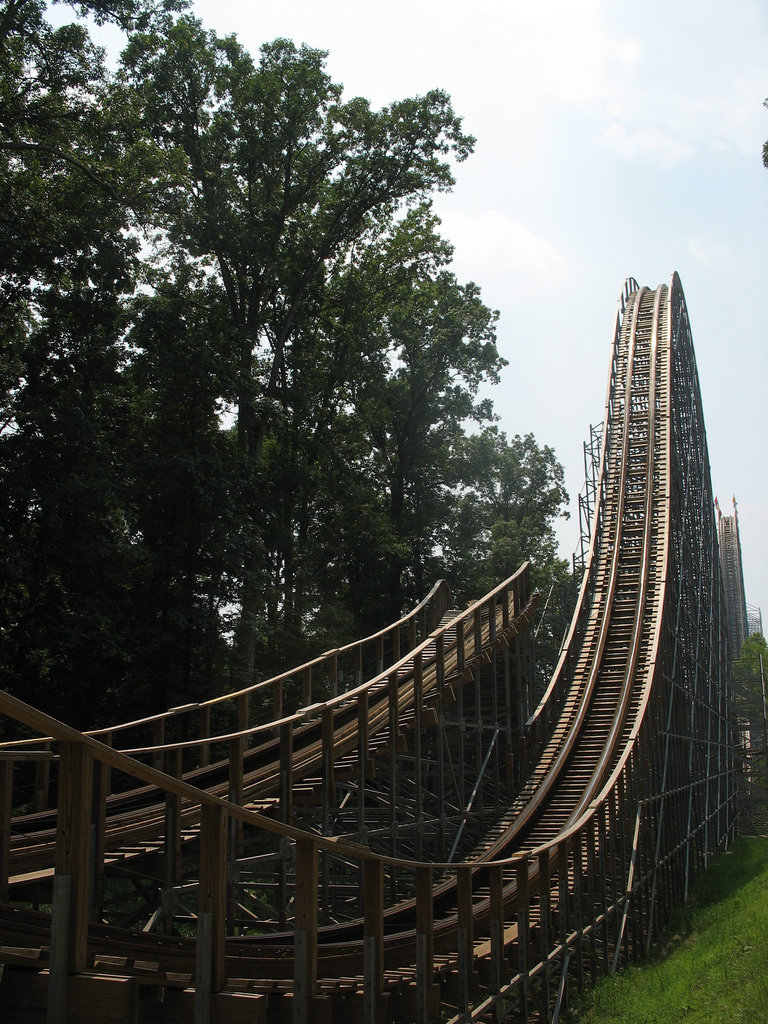 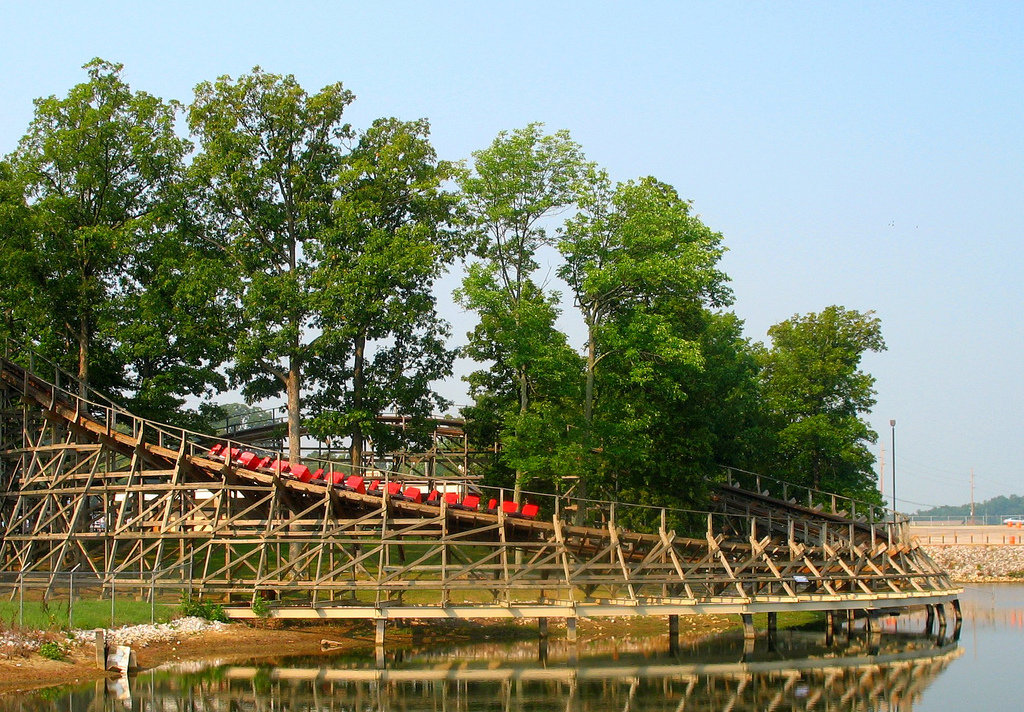 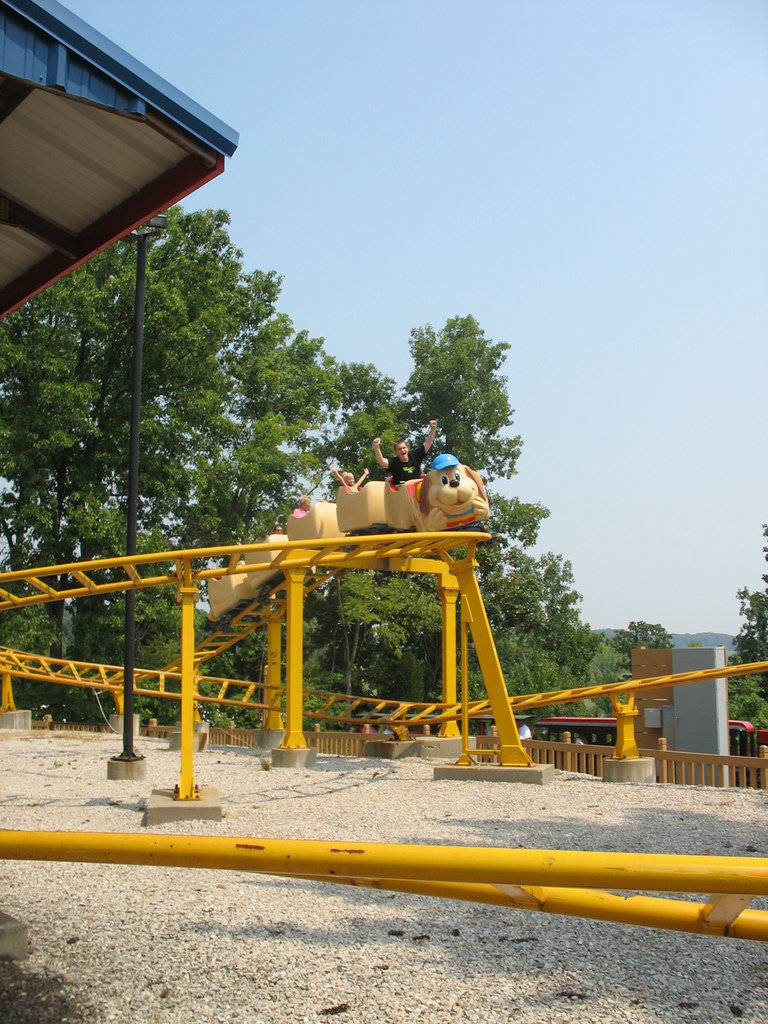 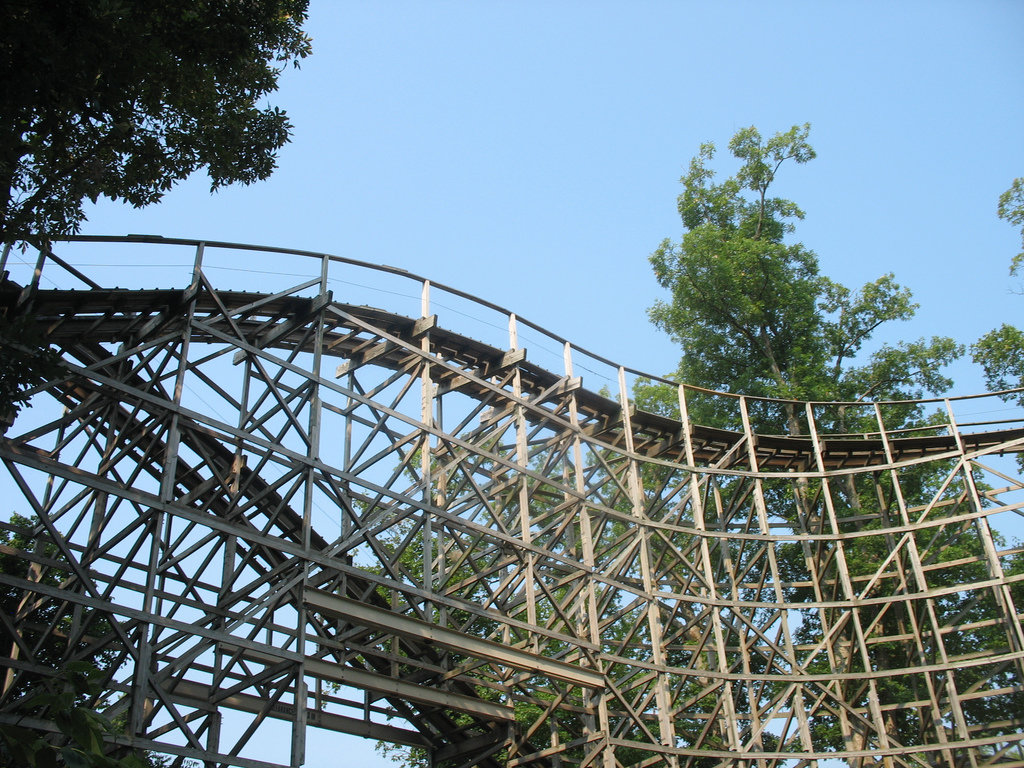 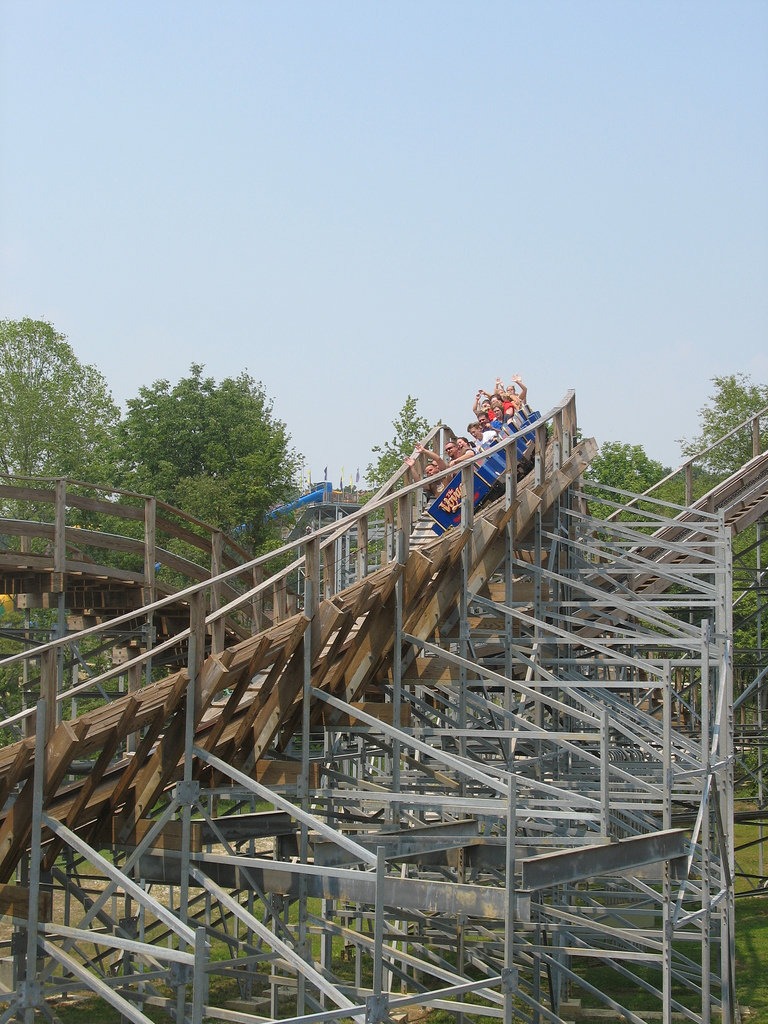 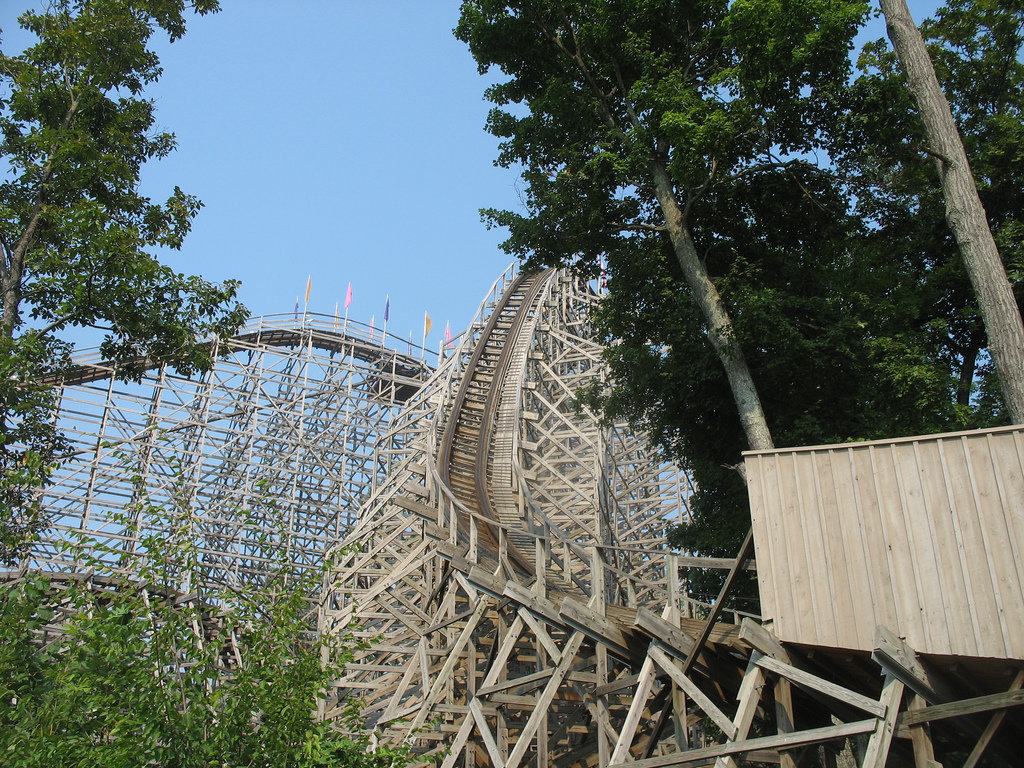 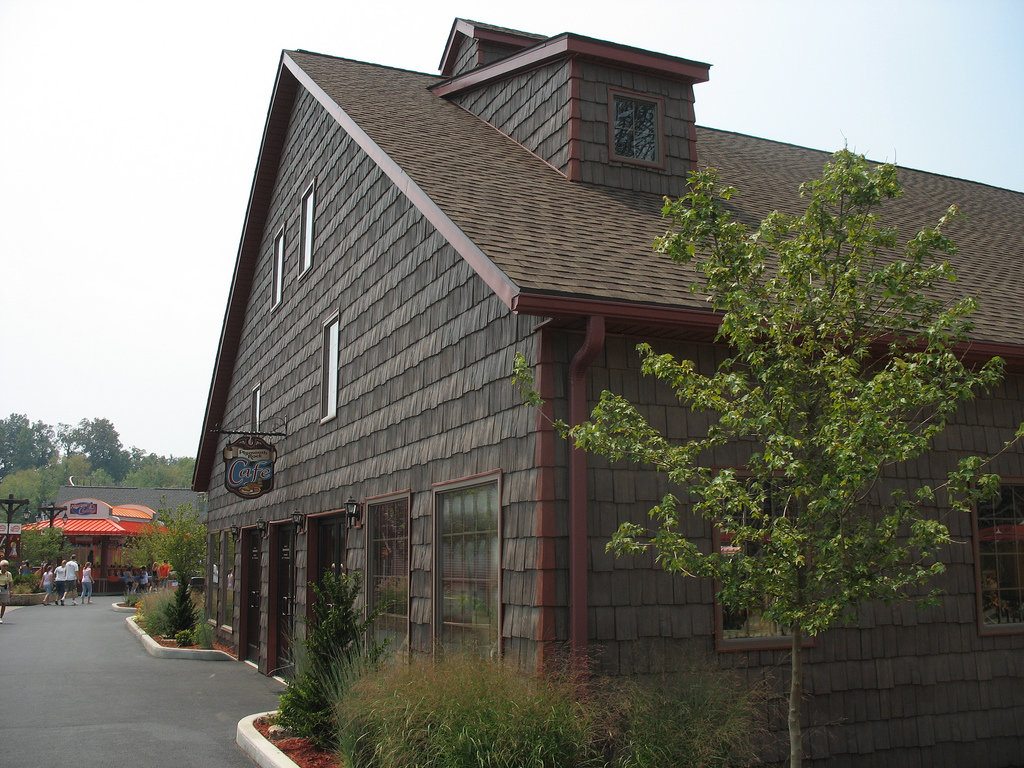 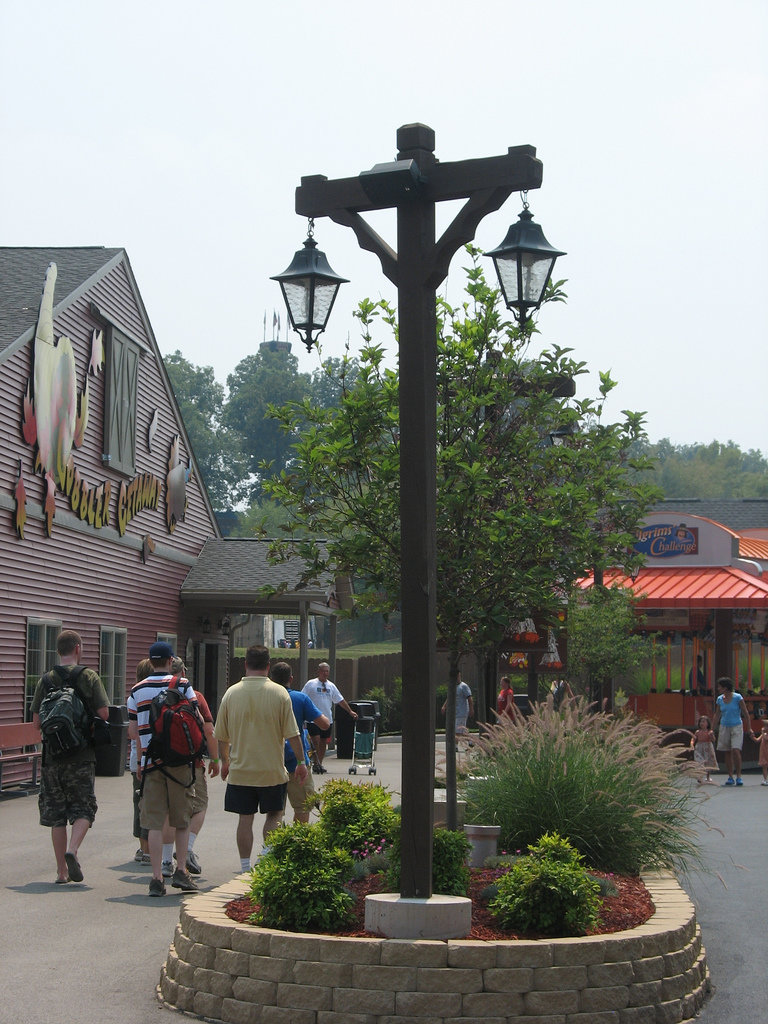 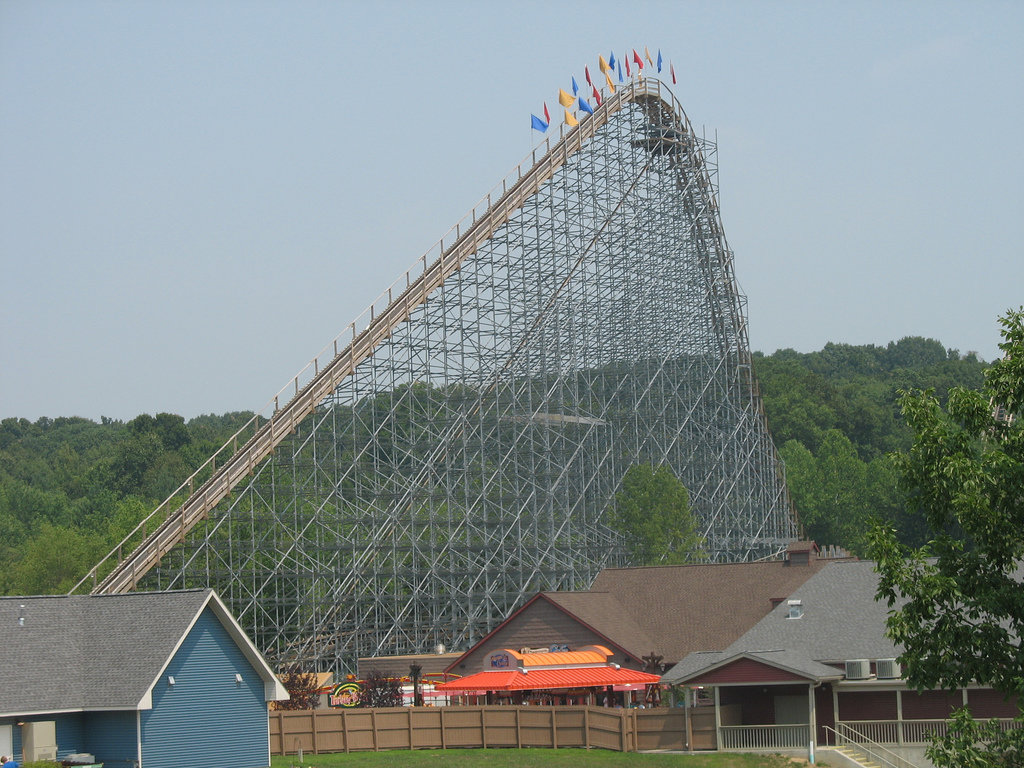 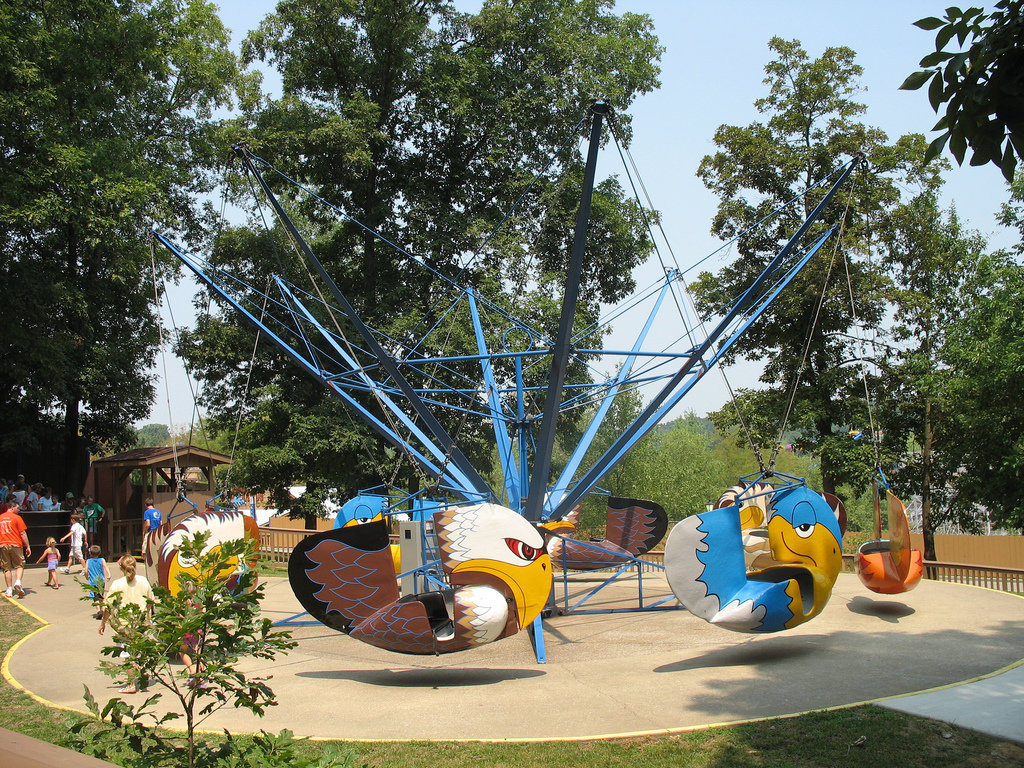 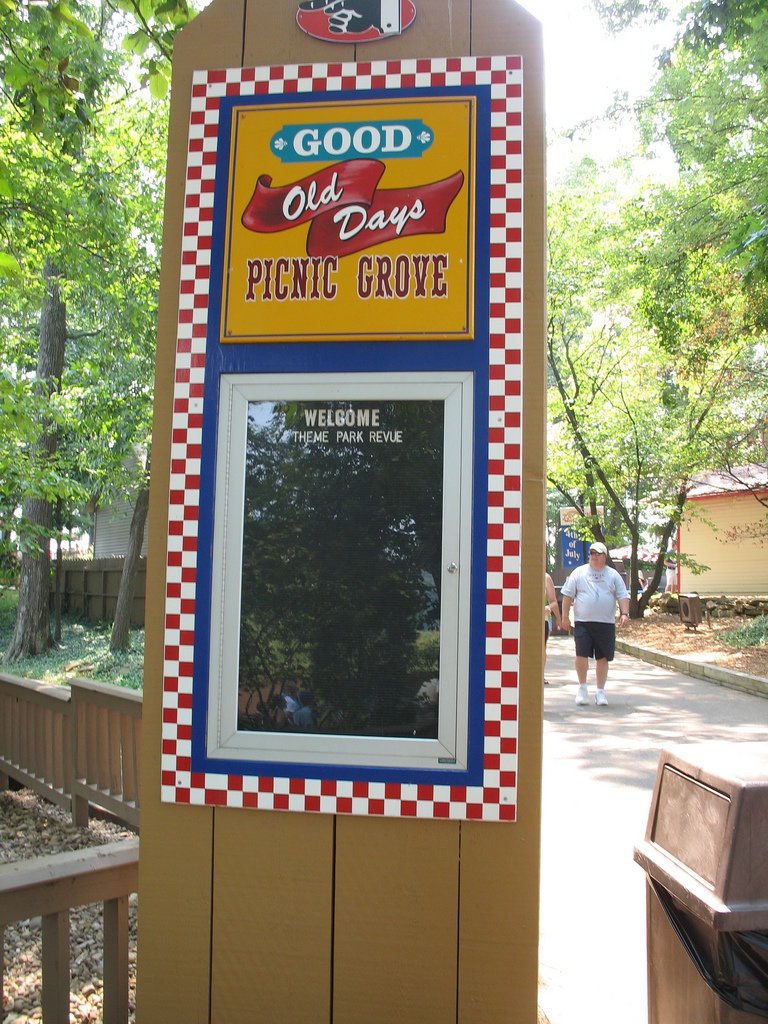 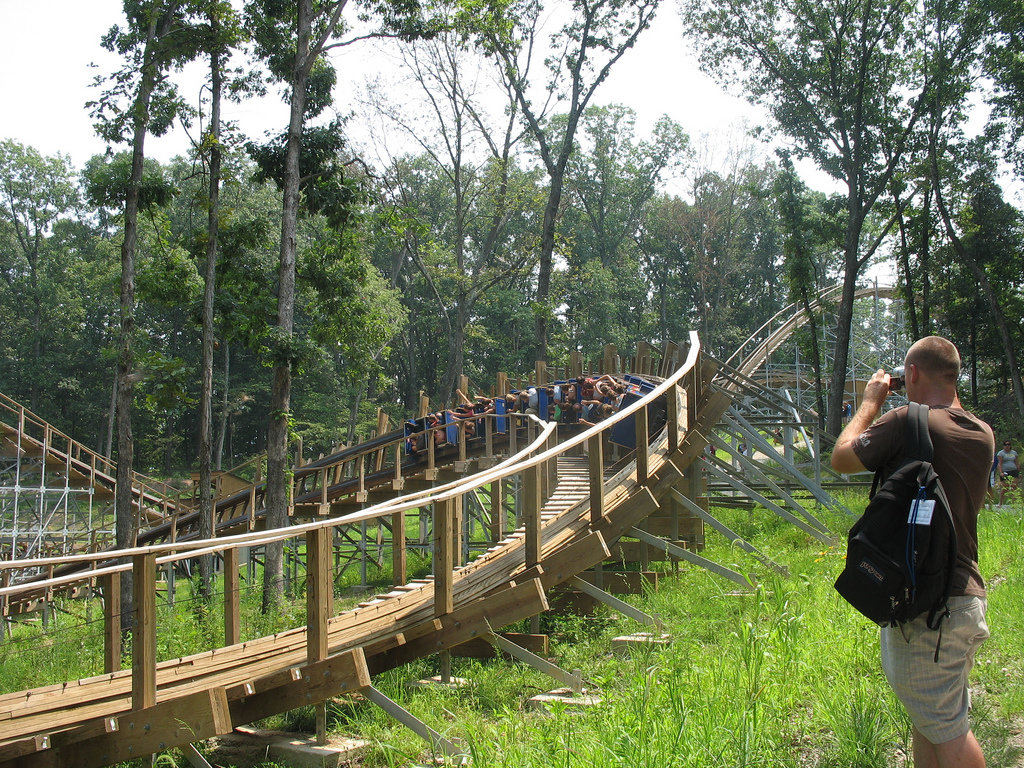 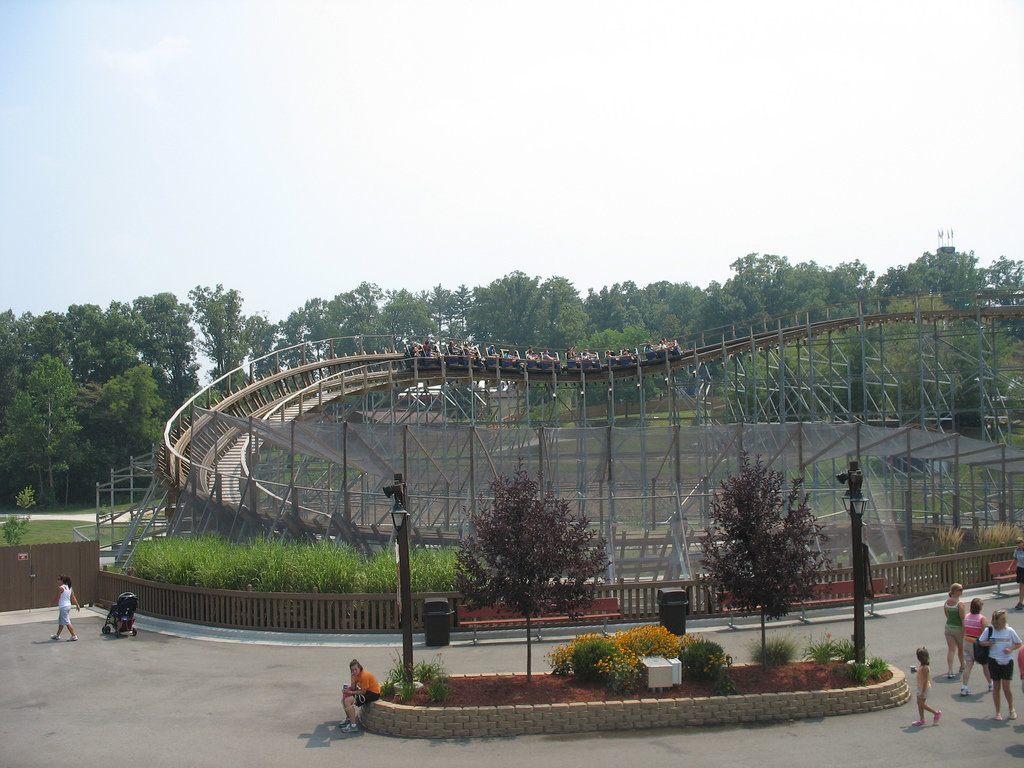 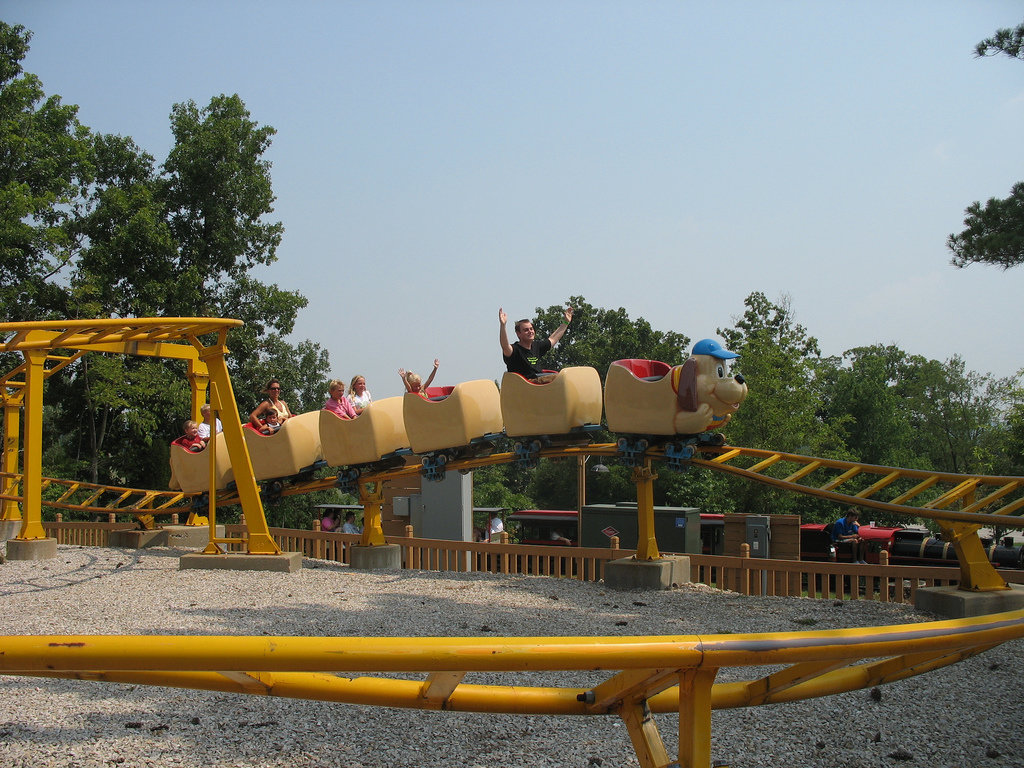