×
What are you looking for?
See all results
Parks in New York 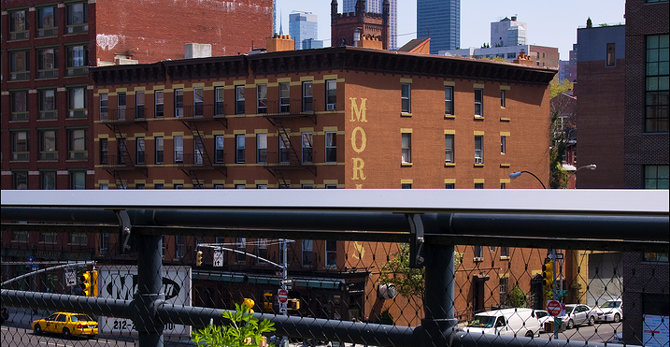 The High Line is a 1-mile (1.6 km) New York City park built on a 1.45-mile (2.33 km) section of the former elevated freight railroad spur called the West Side Line, which runs along the lower west side of Manhattan; it has been redesigned and planted as an aerial greenway. The High Line Park currently runs from Gansevoort Street, one block below West 12th Street, in the Meatpacking District, up to 30th Street, through the neighborhood of Chelsea to the West Side Yard, near the Javits Convention Center.

The recycling of the railway into an urban park has spurred real estate development in the neighborhoods which lie along the line.

In 1847, the City of New York authorized street-level railroad tracks down Manhattan’s West Side. For safety, the railroads hired men – the "West Side Cowboys" – to ride horses and wave flags in front of the trains. Yet so many accidents occurred between freight trains and other traffic that 10th Avenue became known as "Death Avenue".

After years of public debate about the hazard, in 1929 the city and the state of New York and the New York Central Railroad agreed on the West Side Improvement Project, which included the High Line. The 13-mile (21 km) project eliminated 105 street-level railroad crossings and added 32 acres (130,000 m2) to Riverside Park. It cost over $150 million, about $2 billion in 2009 dollars.

The High Line opened to trains in 1934. It originally ran from 34th Street to St. John's Park Terminal, at Spring Street. It was designed to go through the center of blocks, rather than over the avenue, to avoid the drawbacks of elevated subways. It connected directly to factories and warehouses, allowing trains to roll right inside buildings. Milk, meat, produce, and raw and manufactured goods could be transported and unloaded without disturbing traffic on the streets. This also reduced pilferage for the Bell Laboratories Building, now the Westbeth Artists Community, and the Nabisco plant, now Chelsea Market, which were served from protected sidings within the structures.

The train also passed underneath the Western Electric complex at Washington Street. This section has survived until today and is not connected with the rest of the developed park.

The growth of interstate trucking in the 1950s led to a drop in rail traffic throughout the nation. In the 1960s, the southernmost section of the line was demolished. This section started at Gansevoort Street and ran down Washington Street as far as Clarkson Street, representing almost half of the line. The last train ran in 1980 with three carloads of frozen turkeys.

In the mid-1980s, a group of property owners with land under the line lobbied for the demolition of the entire structure. Peter Obletz, a Chelsea resident, activist, and railroad enthusiast, challenged the demolition efforts in court and tried to re-establish rail service on the Line. In the 1990s, as the line lay unused, it became known to a few urban explorers and local residents for the tough, drought-tolerant wild grasses, shrubs, and trees that had sprung up in the gravel along the abandoned railway.

In 1999, the non-profit Friends of the High Line was formed by Joshua David and Robert Hammond, residents of the neighborhood the High Line ran through. They advocated for the Line's preservation and reuse as public open space. Broadened community support of public redevelopment for the High Line for pedestrian use grew, and city funding was allocated in 2004. New York Mayor Michael Bloomberg and City Council Speakers Gifford Miller and Christine C. Quinn were important supporters. The southernmost section, from Gansevoort Street to 20th Street, opened as a city park on June 8, 2009. The middle section opened in June 2011, while the northernmost section's future remains uncertain, depending on a development project currently underway at the Hudson Yards.

Before it was turned into a park, the line was in disrepair, although the riveted steel elevated structure was basically sound. Wild grasses, plants, shrubs, and rugged trees such as sumac grew along most of the route. It was slated for demolition under the administration of New York Mayor Rudy Giuliani.

In 1999, neighborhood residents Robert Hammond and Joshua David created the community group Friends of the High Line to push the idea of turning the High Line into an elevated park or greenway, similar to the Promenade Plantée in Paris. Inspiration was also drawn from Millenium Park in Chicago.

In 2004, the New York City government committed $50 million to establish the proposed park. On June 13, 2005, the U.S. Federal Surface Transportation Board issued a certificate of interim trail use, allowing the City to remove most of the line from the national railway system. On April 10, 2006, Mayor Michael Bloomberg presided over a ceremony that marked the beginning of construction. The park was designed by the New York-based landscape firm of James Corner Field Operations, and architects Diller Scofidio + Renfro, with planting design from Piet Oudolf of the Netherlands and engineering design by Buro Happold. Major backers have included Philip Falcone and Diane von Furstenberg, her husband Barry Diller, and her children Alexander von Furstenberg and Tatiana von Furstenberg. Hotel developer Andre Balazs, owner of the Chateau Marmont in Los Angeles, built the 337-room Standard Hotel straddling the High Line at West 13th Street.

The southern section of the park, running from Gansevoort Street to 20th Street, opened to the public on June 8, 2009. This southern section includes five stairways and elevators at 14th Street and 16th Street.

The park's attractions include naturalized plantings that are inspired by the self-seeded landscape that grew on the disused tracks and new, often unexpected views of the city and the Hudson River. Pebble-dash concrete walkways unify the trail, which swells and constricts, swinging from side to side, and divides into concrete tines that meld the hardscape with the planting embedded in railroad gravel mulch. Stretches of track and ties recall the High Line's former use. Most of the planting, which includes 210 species, is of rugged meadow plants, including clump-forming grasses, liatris and coneflowers, with scattered stands of sumac and smokebush, but not limited to American natives. At the Gansevoort end, a grove of mixed species of birch already provides some dappled shade by late afternoon. Ipê timber for the built-in benches has come from a managed forest certified by the Forest Stewardship Council, to ensure sustainable use, conservation of biological diversity, water resources, and fragile ecosystems.

In addition to the integrated architecture and plant life, the High Line has cultural attractions as well. As part of a long-term plan for the park to host temporary installations and performances of various kinds, Creative Time, Friends of the High Line, and the New York City Department of Parks & Recreation commissioned The River That Flows Both Ways by Spencer Finch as the inaugural art installation. The work is integrated into the window bays of the former Nabisco Factory loading dock, as a series of 700 purple and grey colored glass panes. Each color is exactly calibrated to match the center pixel of 700 digital pictures, one taken every minute, of the Hudson River, therefore presenting an extended portrait of the river that gives the work its name. Creative Time worked with the artist to realize the site-specific concept, which emerged when he saw the rusted, disused mullions of the old factory, which metal and glass specialists Jaroff Design helped to prepare and reinstall. The summer of 2010 featured a sound installation by Stephen Vitiello, composed from bells heard through New York. Lauren Ross, formerly director of the alternative art space White Columns, is serving as the first curator for the High Line.

The park extends from Gansevoort Street north to 30th Street where the elevated tracks turn west around the Hudson Yards development project to the Javits Convention Center on 34th Street. The northernmost section, from 30th to 34th Streets, is still owned by the CSX railroad company, but the New York City Planning Commission has announced a move toward City ownership of this section.

Mayor Bloomberg noted that the High Line project has helped usher in something of a renaissance in the neighborhood: by 2009, more than 30 projects were planned or under construction nearby.

A 2010 a minor controversy came about concerning the High Line's policy of not allowing artists to sell their works in the park.

Crime has been extraordinarily low in the park. Shortly after the second section opened, The New York Times reported that there have been no reports of major crimes such as assaults or robberies since it opened. Parks Enforcement Patrols had written summonses for various infractions of park rules, such as taking dogs or bicycles on the walkway, but at a rate lower than Central Park. Park advocates attributed that to the high visibility of the High Line from the surrounding buildings, a design feature inspired by the writings of urbanist Jane Jacobs. "Empty parks are dangerous", David told the newspaper. "Busy parks are much less so. You’re virtually never alone on the High Line."

The Dia Art Foundation considered but rejected a proposal to build a museum at the Gansevoort Street terminus. The Whitney Museum plans to build on the site, with a design by Renzo Piano, rather than its initial plan of expanding its existing building by Marcel Breuer uptown.

Marina
You can walk from 14th to 34th and not realize you walked all the way to midtown. Love that there's so many benches and places to sit so you can just chill out, look at art and think.

Mark Bramhill
A great park. Start at the southern tip and walk the full way north past Hudson Yards. The new northern expansion is my favorite part — quieter, more natural. Gives you a new perspective on the city.

Richard Revilla
Very unique and clever use of urban landscape. Always a good time to come and enjoy some of the street art below. Use the sun chairs to grab some sun during warm days.

Nick El-Tawil
The High Line is pretty cool. The only thing not to like is that it’s so good that everyone comes here and it gets too crowded. Check it out on a weekday morning or at night to dodge the crowds.

Dens
Walk the whole thing (sunset = best). If its night time, look for the exhibitionists Doing Their Thing in the windows of the Standard Hotel. Sit in sunken mini-theater (you'll know it when you see it)

Richie Stark
(Good luck) go(ing) when it's not crowded, as the contrast with the aves below will be even more stark. Different views, installations, and no traffic lights make it the best way to walk the west side
Load more comments
foursquare.com

The Flatiron Building, or Fuller Building as it was originally called,

Add to wishlist
I've been here
Visited
Museum of Sex 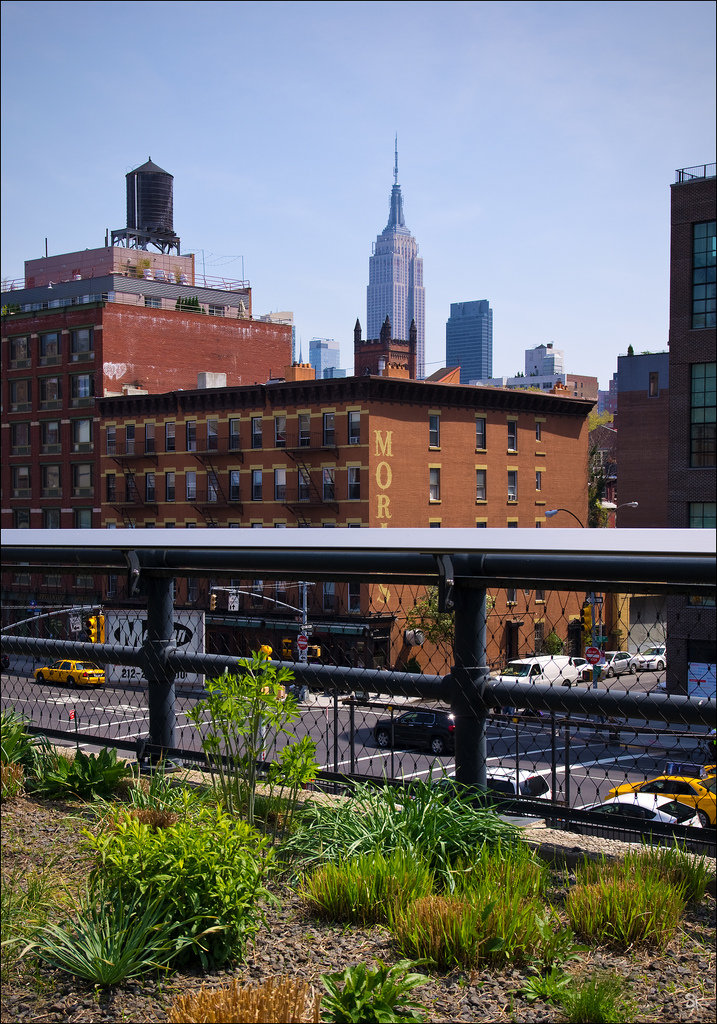 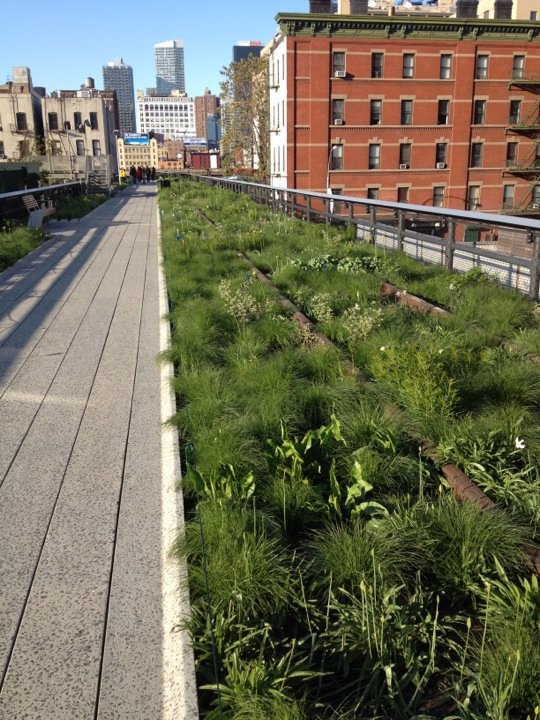 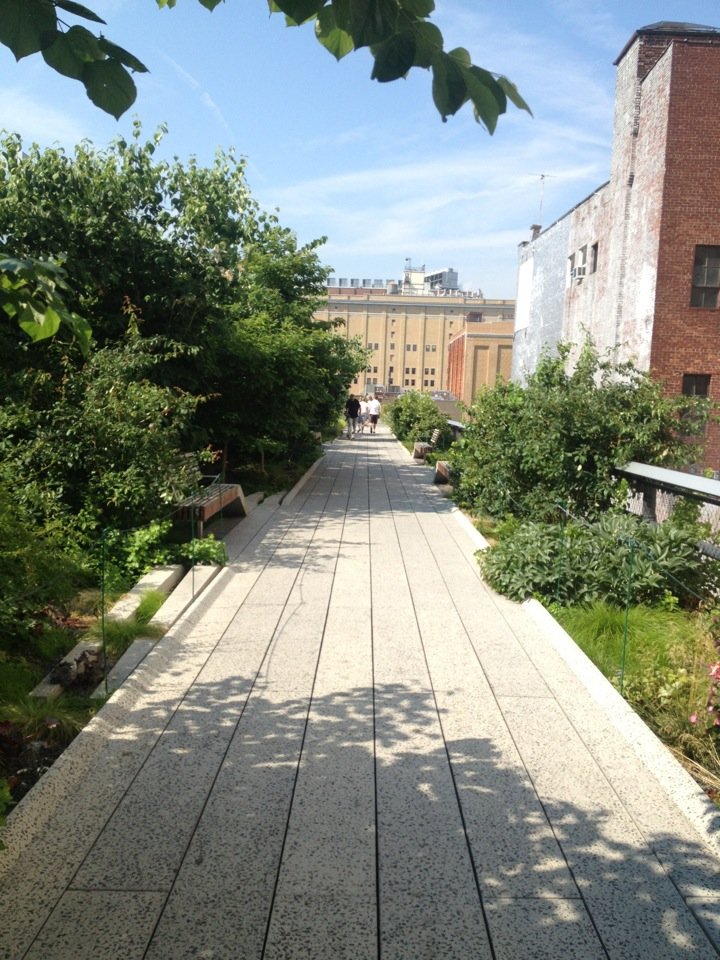 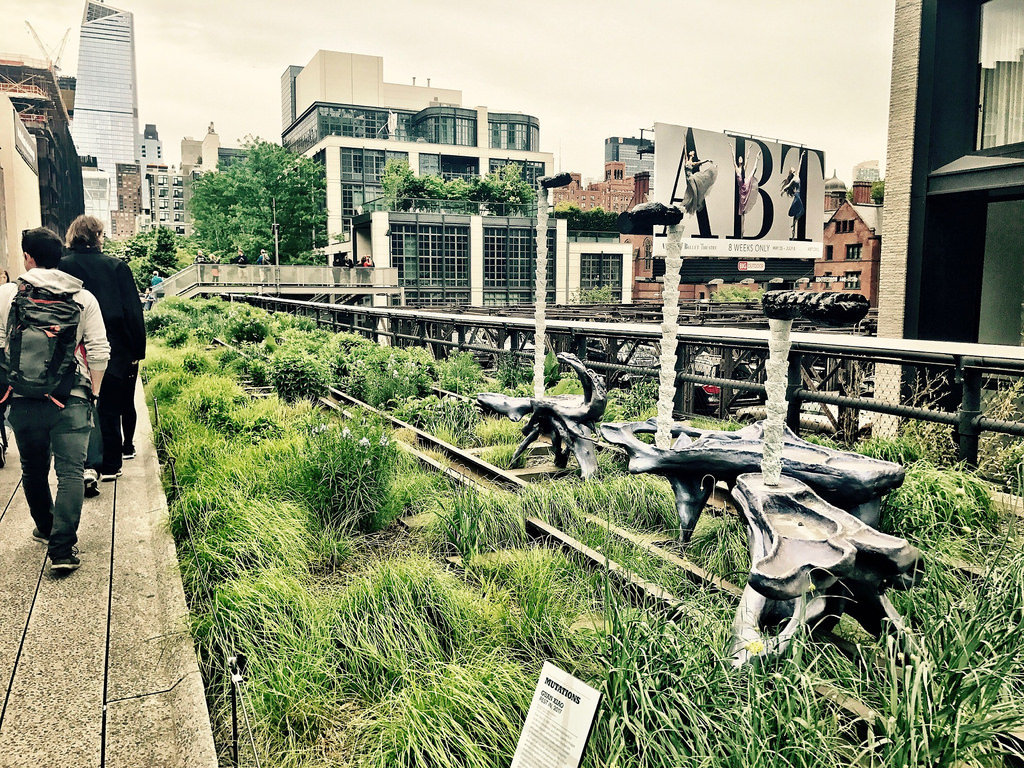 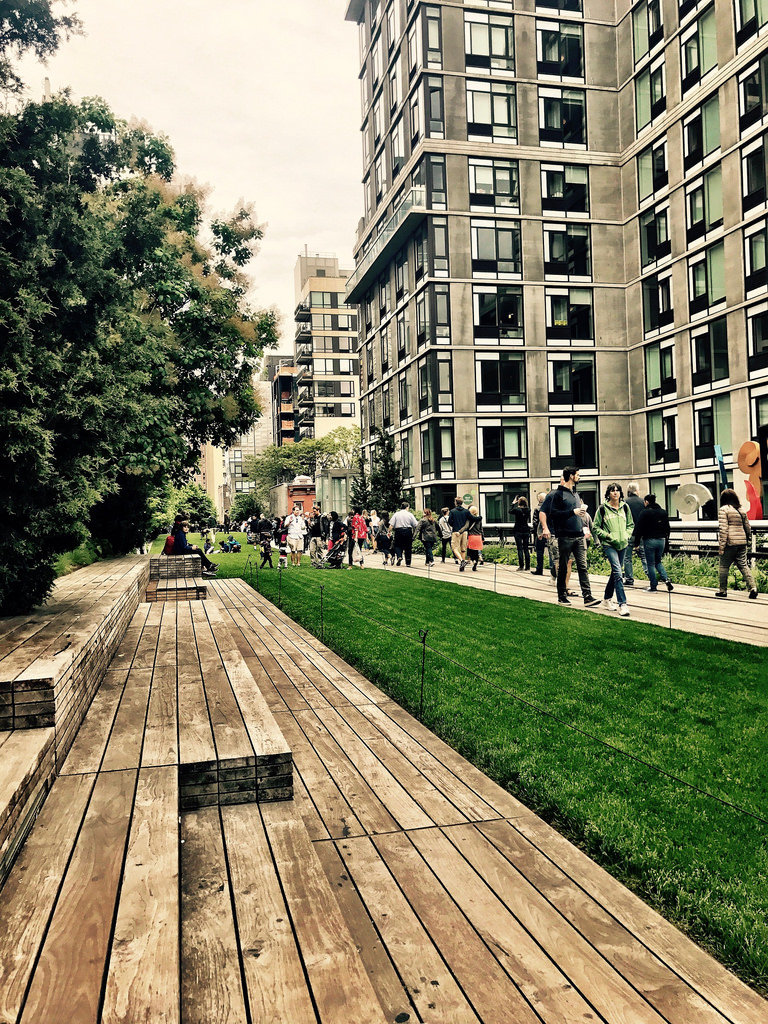 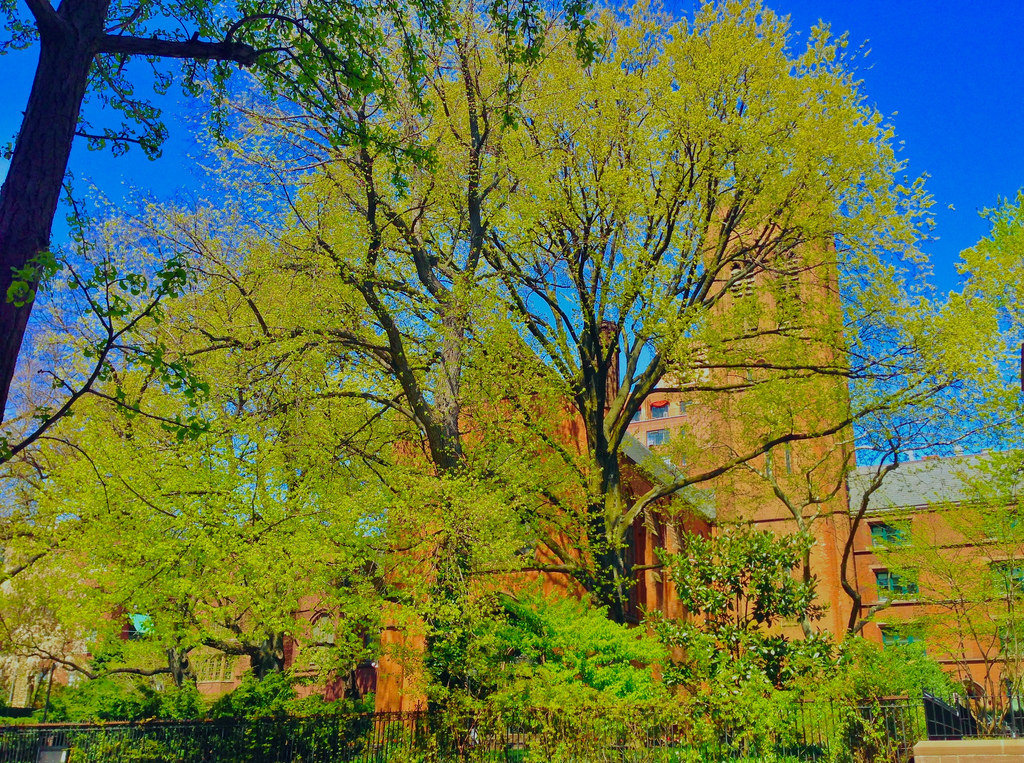 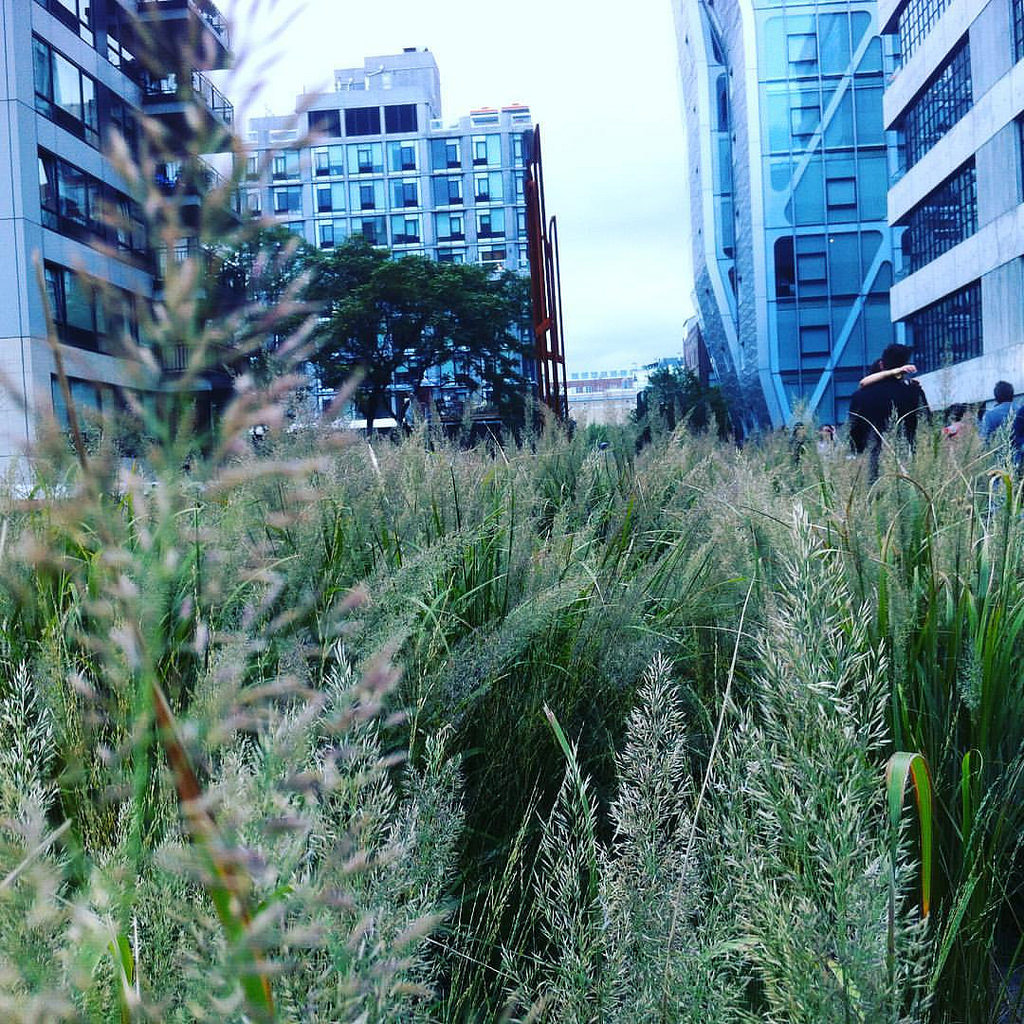 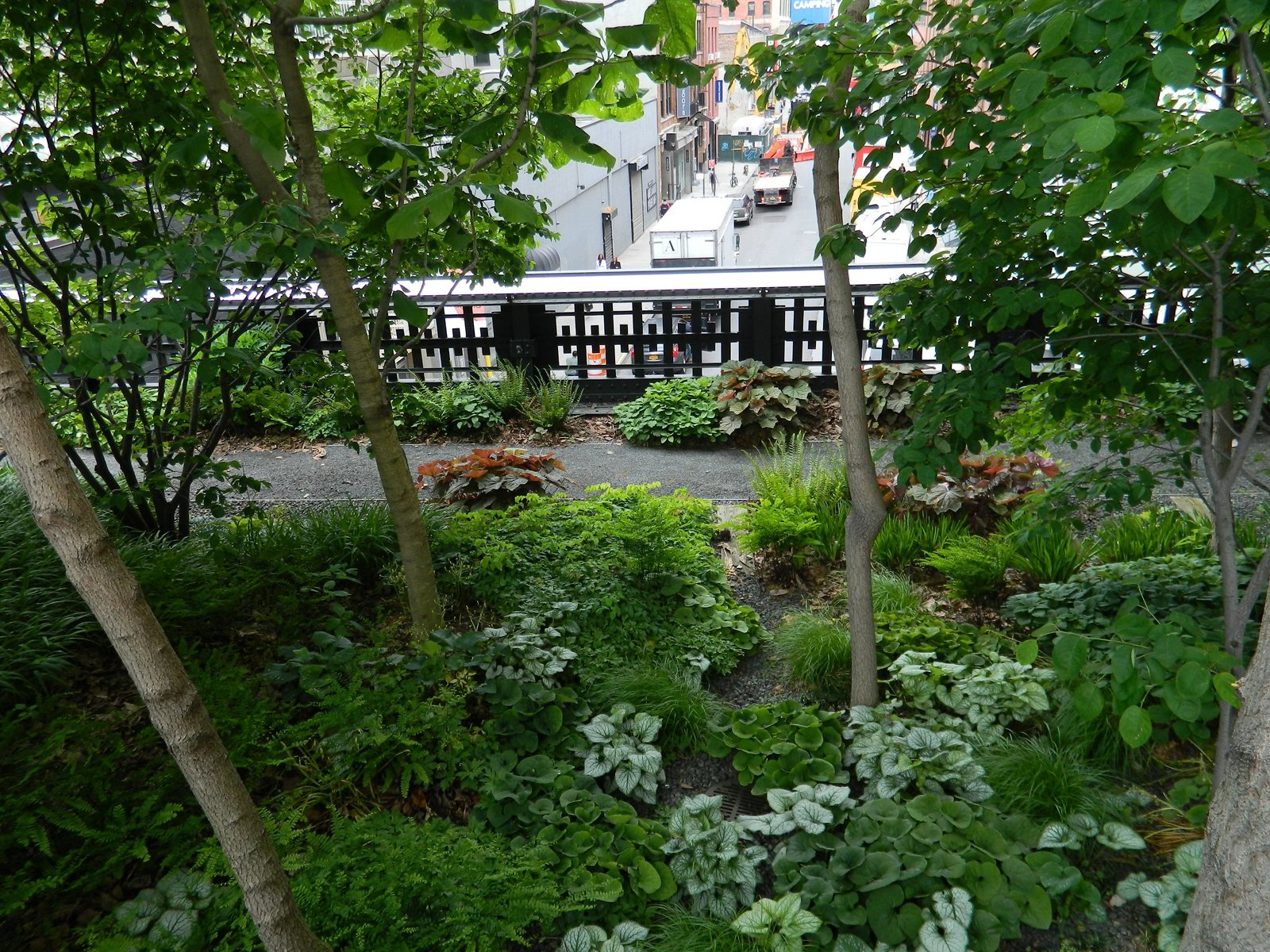