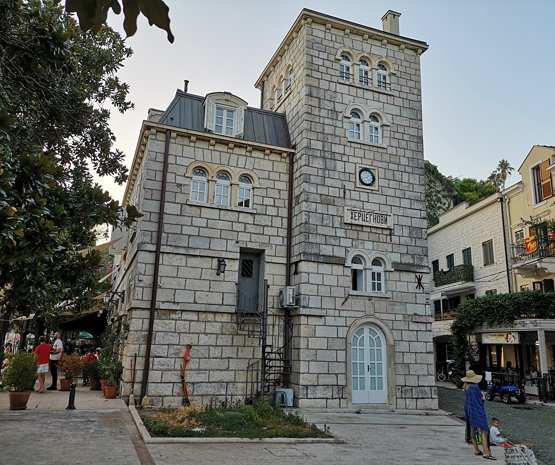 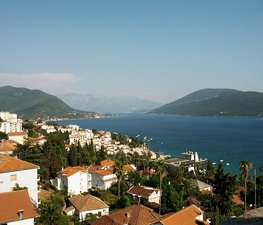 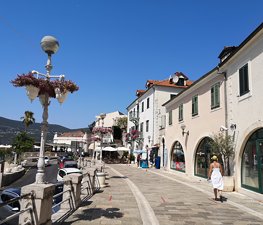 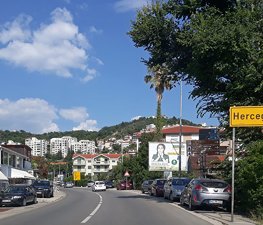 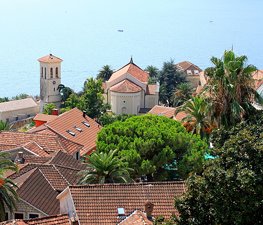 Herceg Novi (Cyrillic: Херцег Нови, pronounced ]) is a coastal town in Montenegro located at the Western entrance to the Bay of Kotor and at the foot of Mount Orjen. It is the administrative center of the Herceg Novi Municipality with around 33,000 inhabitants. Herceg Novi was known as Castelnuovo ("New castle" in Italian) between 1482 and 1797, when it was part of the Ottoman Empire and the Albania Veneta of the Republic of Venice. It was a Catholic bishopric and remains a Latin titular see as Novi. Herceg Novi has had a turbulent past, despite being one of the youngest settlements on the Adriatic. A history of varied occupations has created a blend of diverse and picturesque architectural style in the city.

In Montenegrin, the town is known as Herceg Novi or Херцег Нови; in Italian as Castelnuovo; and in Greek as Neòkastron (Νεοκαστρον), Turkish as Kala-i Novi, all meaning 'new castle'. The name Herceg Novi, in its modern form, was first mentioned in a Turkish document in 1726.

Archeological findings from the Luštica peninsula and the Vranjaj cavern imply that the area was populated during the Neolithic and early Bronze Age. In the 3rd century BC, after their victory over the Illyrians, the area was ruled by the Roman Republic. After the split of the Roman Empire, the area fell under the rule of the Western Roman Empire. After the fall of the Western Roman Empire, the area was dominated by the Byzantine Empire. Slavic tribes began inhabiting these lands during the 7th century AD. During these times the small settlement was part of Byzantine-held Dračevica district, which in turn later belonged to the Principality of Travunija. During the 10th century, Dračevica came under the control of various Dioclean/Zetan dukes, who were in turn incorporated into Kingdom of Serbia ruled by the Nemanjić dynasty. After the death of Emperor Stefan Dušan, the Serbian Empire began to fracture into smaller principalities and districts, Dračevica being administered by great duke Vojislav Vojinović. After the rulership of Vojinović, the area, along with most of modern Montenegro, came under the rule of the Balšić noble family.

The medieval town was founded on a small fishing village as a fortress in 1382 by the first King of Bosnia, Tvrtko I Kotromanić and was originally named Sveti Stefan (Saint Stephen).

After the death of Tvrtko, Duke Sandalj Hranić of the Herzegovinian Kosačas acquired Sveti Stefan. During his reign, the town picked up trading salt. When Hranić died, his nephew, Herzog Stjepan Vukčić Kosača inherited it. During his reign, the town grew in importance and became Stjepan's winter seat, getting a new name in the process: Herceg Novi.

The Ottomans conquered Herceg Novi before 14 December 1481, and ruled for 200 years, until 1687. They built Kanli Tower on the upper edge of the city. However, there was a short pause between 1538 and 1539 when it was held by the Spaniards before they were defeated in the Siege of Castelnuovo. In their brief overlordship, the Spanish built a Hispaniola fort above the city that is well-preserved today. Evliya Çelebi visits the Bay of Kotor and mentions Croats, Bosnians and Albanians (Arnauts) who live in the Herceg Novi.

In 1608 a earthquake struck Herceg Novi and devestaded it.

Republic of Venice gained control of the city and included it into Albania Veneta, an administrative unit on the territory of present-day coastal Montenegro. In Venice, the city was known as Castelnuovo. The Venetians refortified the old town walls and towers and reinforced the fortress with a Citadella tower (destroyed in an earthquake in 1979). On 24 August 1798, Herceg Novi was annexed by Habsburg Austria but was then ceded to Russia as per the Treaty of Pressburg on 26 December 1805. The Russians officially occupied Herceg Novi between 28 February 1806 and 12 August 1807.

On 7 July 1807, Herceg Novi was ceded to Napoleon I Bonaparte's French Empire as per the Treaty of Tilsit. Official French rule over Herceg Novi began on 12 August 1807, when the Russians left the city. The city was part of Dalmatia until 14 October 1809, when it was annexed to the newly created Illyrian Provinces.

Herceg Novi, as well as the rest of the Bay of Kotor, was overtaken by Montenegrin forces in 1813. It was under control of a temporary government based in Dobrota between 11 September 1813 and 10 June 1814, which was supported by Montenegro. The appearance of Austrian forces in 1814 caused the Prince-Bishop of Montenegro to turn over the territory to Austrian administration on 11 June. After Herceg Novi was retaken, as well as the rest of the bay, it became part of the Dalmatian crownland. The bay was under Austro-Hungarian control until 1918.

In 1900, the two names ERZEG NOVI and CASTELNUOVO PRESSO CATTARO were used in bilingual cancellations.

The Kingdom of Montenegro attempted to retake the Bay of Kotor during World War I, it was bombarded from Lovćen, but by 1916 Austria-Hungary defeated Montenegro.

On 7 November 1918, the Serbian Army entered the bay and were greeted by the people as Slavic liberators. The bay later became a part of the self-proclaimed State of Slovenes, Croats and Serbs. Within a month, this region united with Serbia as part of the Kingdom of Serbs, Croats and Slovenes, renamed to Yugoslavia in 1929. The bay was a municipality of Dalmatia until it was, like all historic entities, abolished in 1922. It was incorporated into the Zeta Oblast (province), from 1929 style Zeta Banate.

Herceg Novi was annexed by Mussolini's fascist Italy during World War II in 1941. It became a part of the province of Cattaro.

It once was a Catholic bishopric, but no residential incumbent data are available.

In 1933 the diocese was nominally restored by establishing in the Latin Church of the Catholic Church a titular bishopric of Novi (in Dalmatia), listed as suffragan of the Archdiocese of Doclea (which in Classical times controlled its region in the Roman province of Dalmatia Superior).

The following individuals held the titular bishopric. They were either auxiliary bishops or officials of the Vatican:

The Herceg Novi municipality stretches from Prevlaka to the Verige strait. An almost unbroken string of towns lie along this strip of coast, accommodating the municipality's 30,864 (2011 census) residents.

Whilst the city itself is not a major destination for sunbathing, with no long sandy beaches along the rest of the Bay of Kotor, many beaches are reachable by boat. Tourist companies organise one-day boat trips to Luštica peninsula, which lies opposite to the town. Popular Luštica peninsula beach sites include Žanjic, Mirište and Rose. Herceg Novi accounted for one-third of overnight stays in Montenegro before the Yugoslav wars, but the situation has changed since in favour of Budva, Kotor and other resorts.[]

Local bus station will charge doubtfully legal fee of €2 for entering its platform with printed e-ticket.

"JUK Herceg-Fest" This cultural events center was established on 24 February 1992. Two years later the cultural center joined with the "Orijen" movie distribution and production company. Together they have played a crucial role in enhancing the city's cultural life. Among many annual festivities are the mimosa celebration, local theatrical events, and a film and music fest.

"The Operosa Opera Festival" takes place during the summer in the Kanli Kula amphitheater inside the fortress of Stari Grad (Old Town) and in the Forte Mare fortress.

The Herceg Novi City Archive was returned in 1956 the Archive to Herceg Novi after being temporarily relocated to Zadar, Croatia. The Archive was relocated to Zadar by Italians during the Second World War. The original archive building, built in 1885, suffered severe damage from the 1979 earthquake. Shortly afterward, the building was renovated. Today, the Archive is 700 m2 (7,535 sq ft) in size. The Archive features modern equipment and a library open to the public. The oldest document in the Archive originated in 1685. The library contains approximately 30,000 volumes and 1,000 periodicals.

The Historical Museum was established in 1949 and officially opened in 1953. The museum building, a gift to the city from the former mayor, Mirko Komnenović (1870–1941), and his wife Olga, is at least 150 years old.

The City library contains at least 30,000 volumes. Among the contributors to this collection are Dušan Petković (5,000 books), Veljka Radojević (1,500), Doklestić, Daljev, Lučić, Subotić and others.

Herceg Novi or Igalo is usually the final destination of buses that come from inland Montenegro and Serbia. The Adriatic Motorway, a two-lane motorway that extends for the length of the Montenegrin coast, goes through Herceg Novi before it merges with the Croatian road network at the Debeli Brijeg border crossing.

The ferry operates on the Kamenari – Lepetane line at Verige Strait, eliminating the need to go all the way around Boka Kotorska bay in order to reach Tivat, Kotor, Budva and inland Montenegro.

Tivat Airport is 23 km (14 mi) away (via the ferry). There are regular flights to Belgrade and Zürich, and dozens of charter planes land daily on Tivat airport during the summer season. Dubrovnik Airport in Croatia is some 30 km (19 mi) away, and it maintains regular flights to many European destinations.

The area of the Bay of Kotor has a humid subtropical climate (Köppen climate classification: Cfa) with significantly more rain in the winter than in the summer. Herceg Novi has a specific microclimate, which is a result of southern exposition, proximity to the sea, limestone substratum and mountainous hinterland which prevents the breakthrough of cold air masses.

Herceg Novi is twinned with:

Toby Ashworth
Yachting club 32 is a really good bar/managed beach, you can get drinks by the water, which is great for swimming...there's also a gym which I didn't use, but it looked good :)

Our Lady of the Rocks (Montenegrin, Croatian: Gospa od Škrpjela,

Perast (Montenegrin: Пераст) is an old town in the Bay of Kotor in Mo 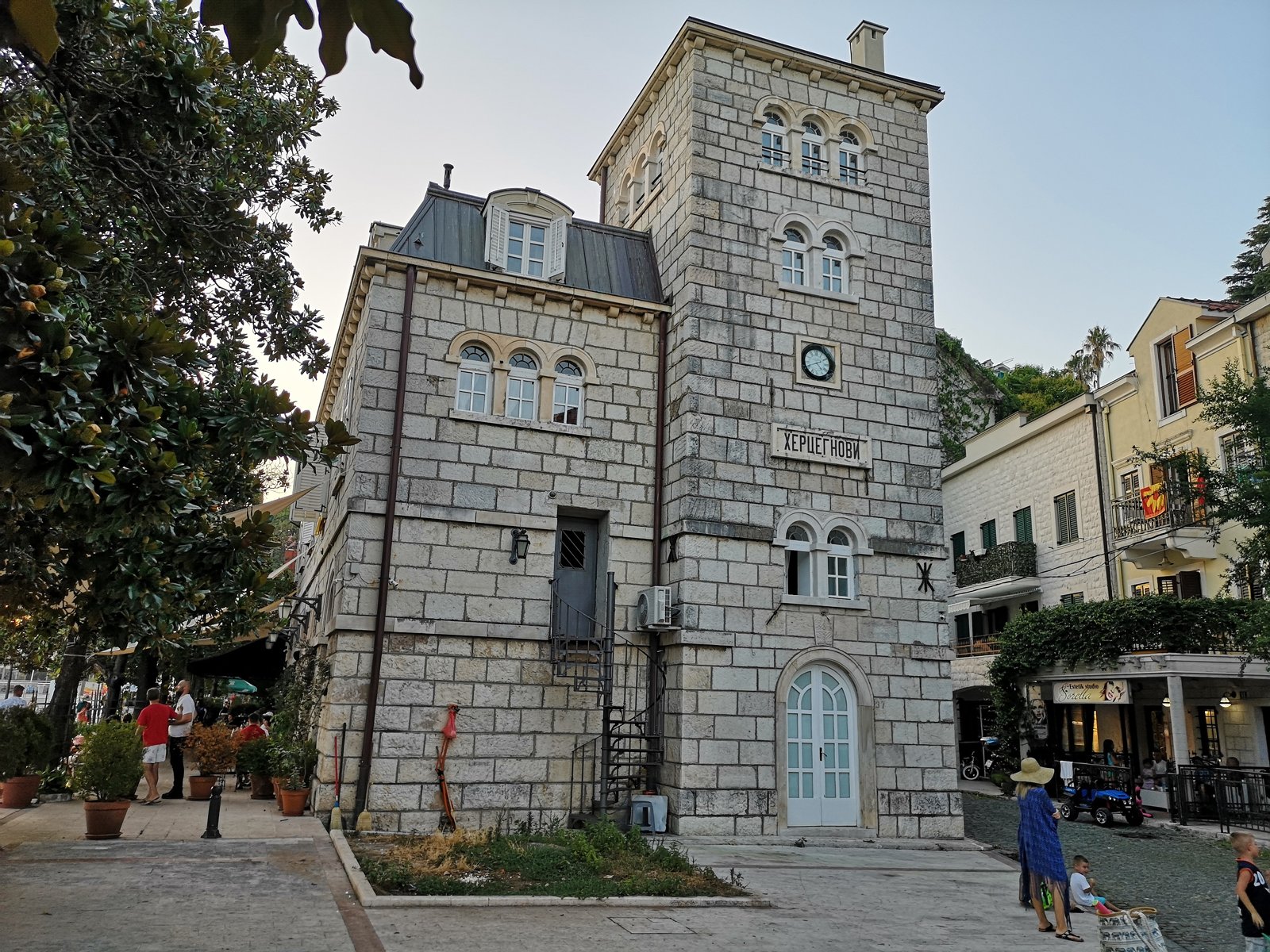 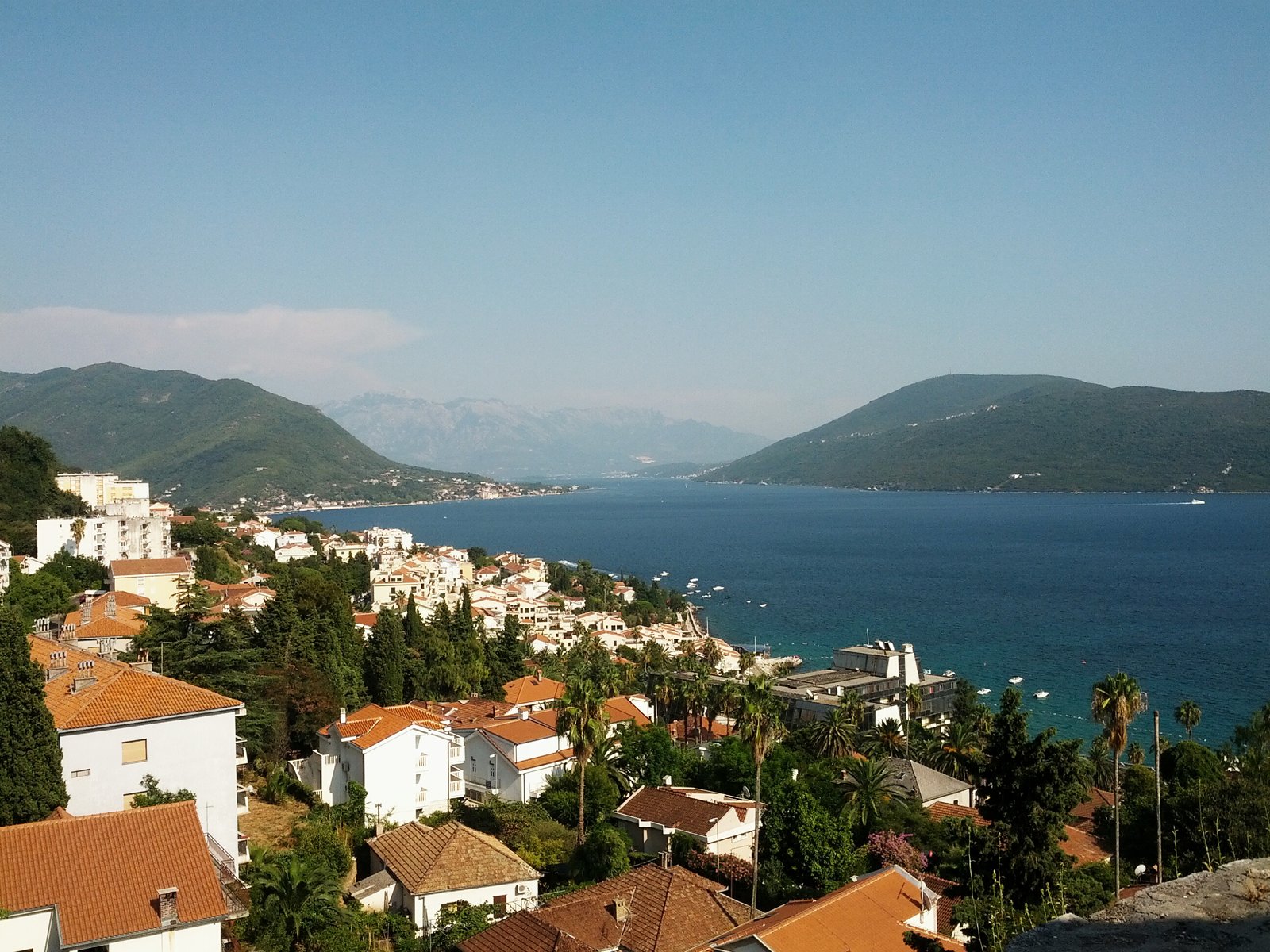 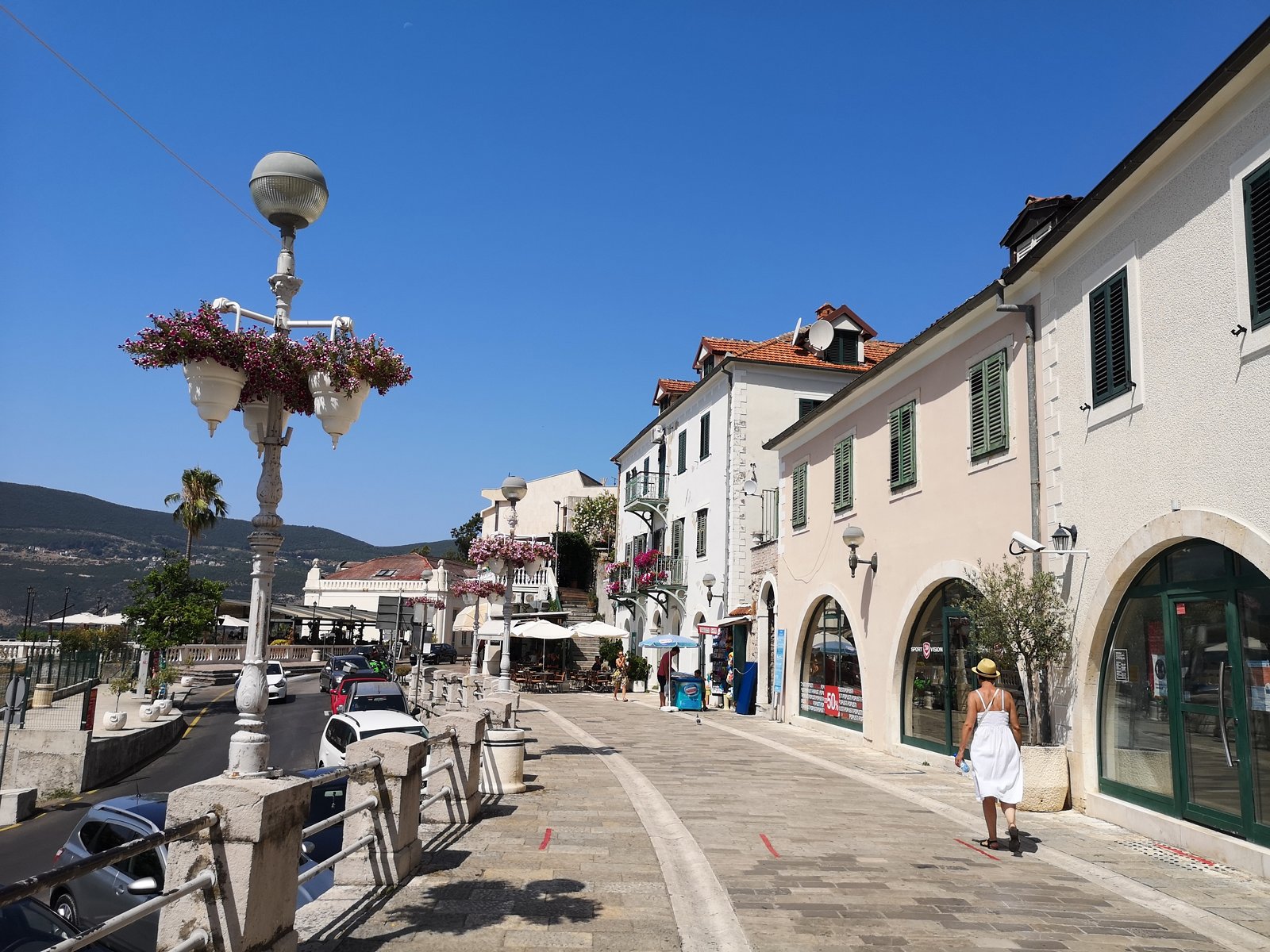 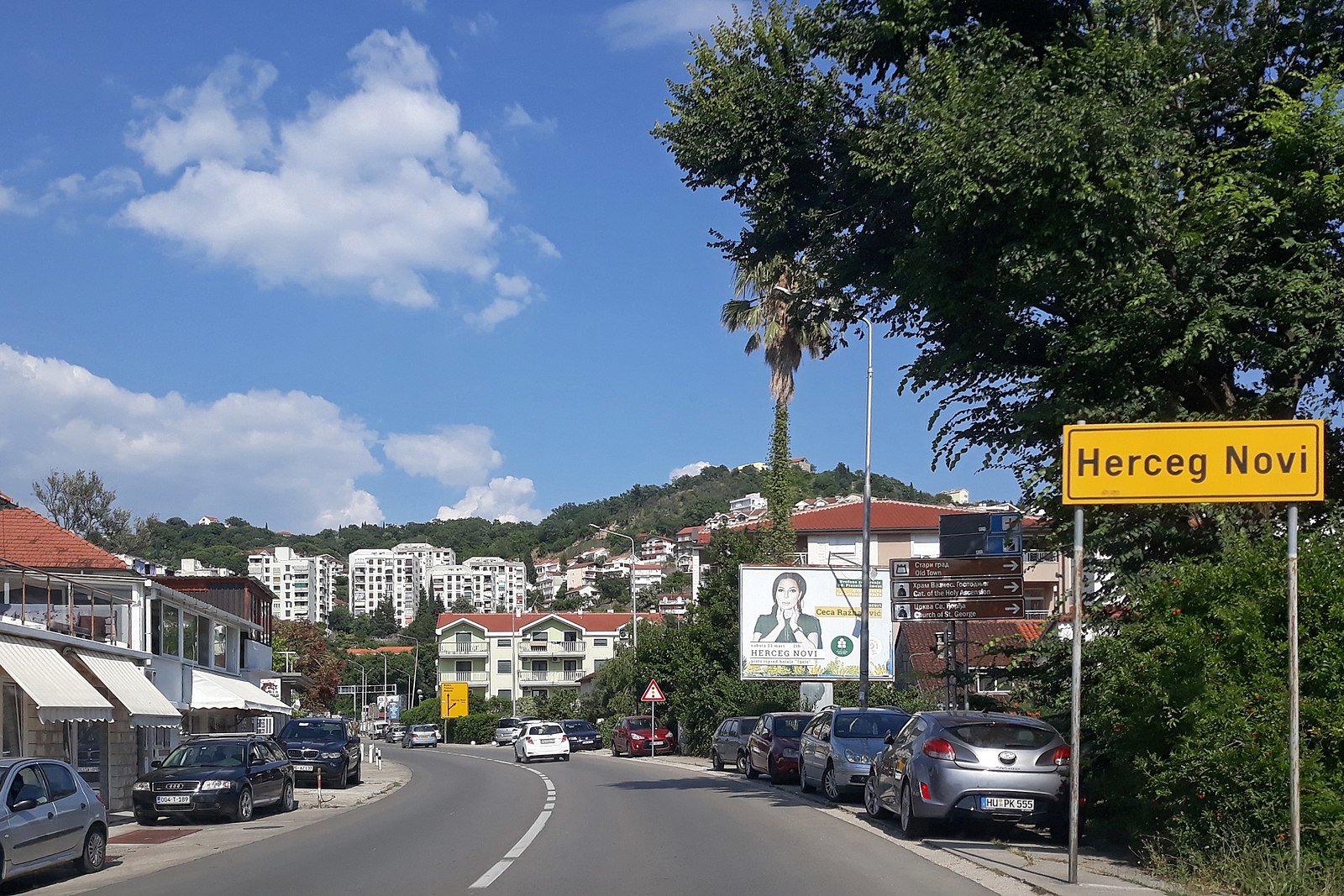 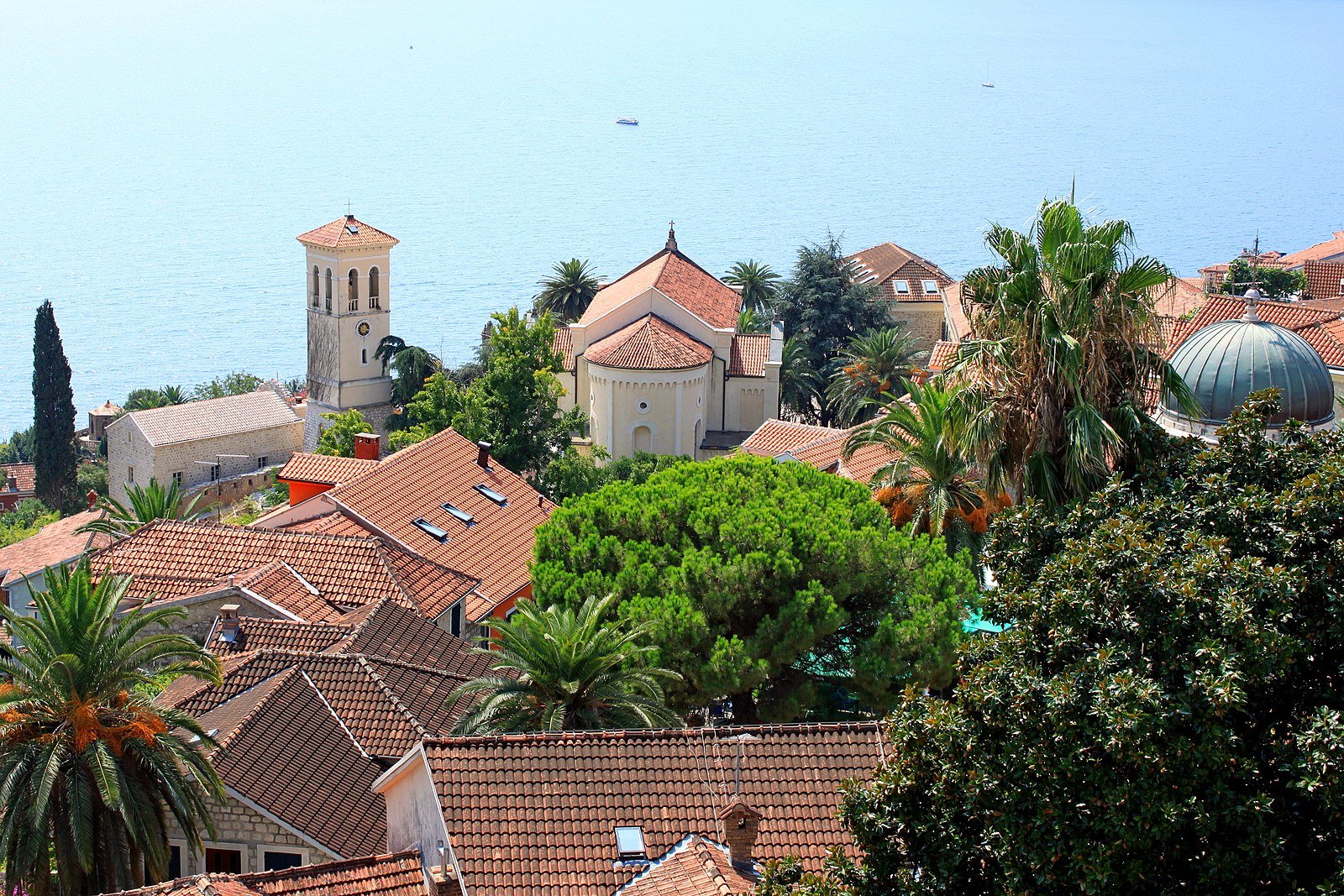 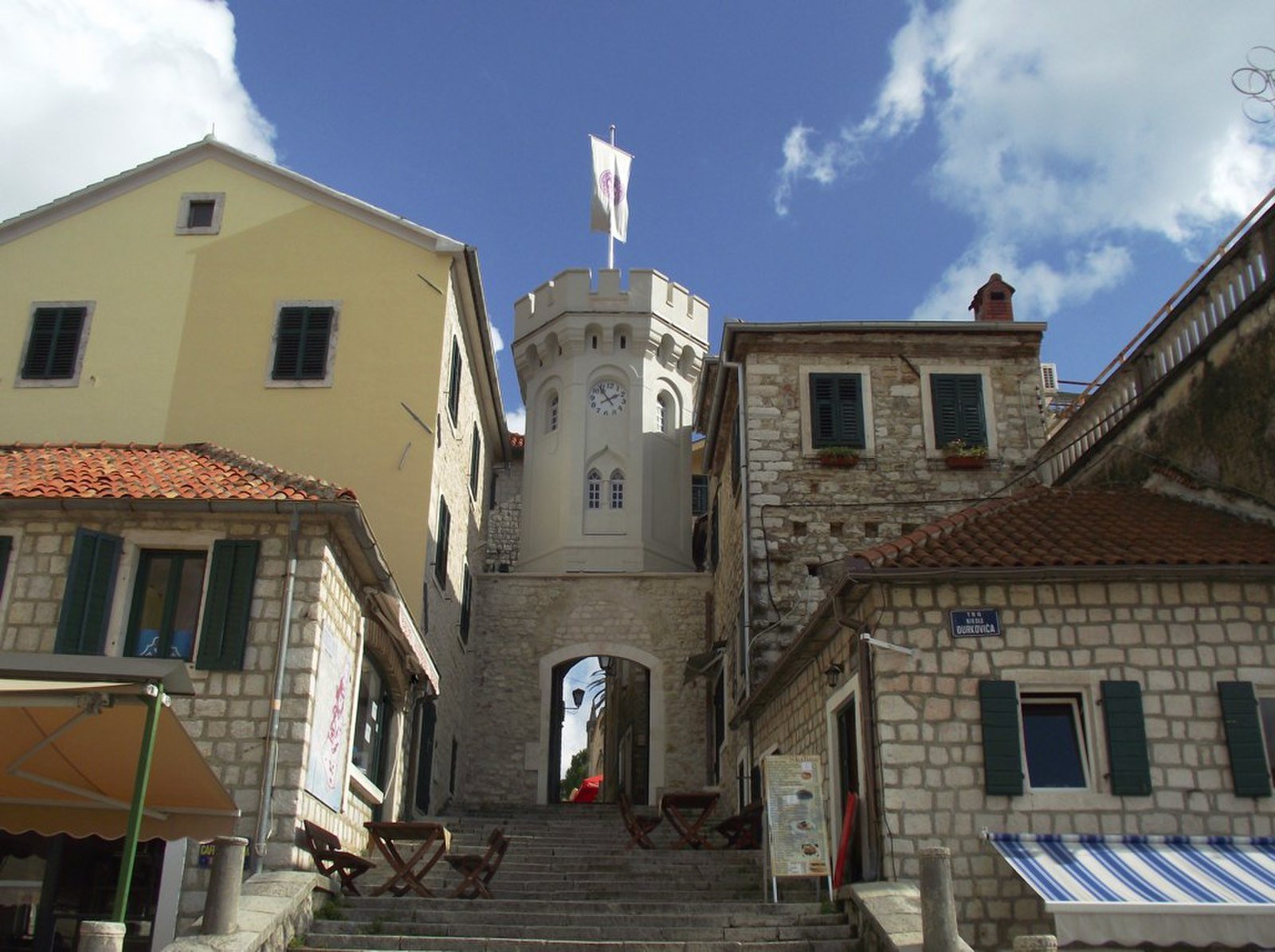 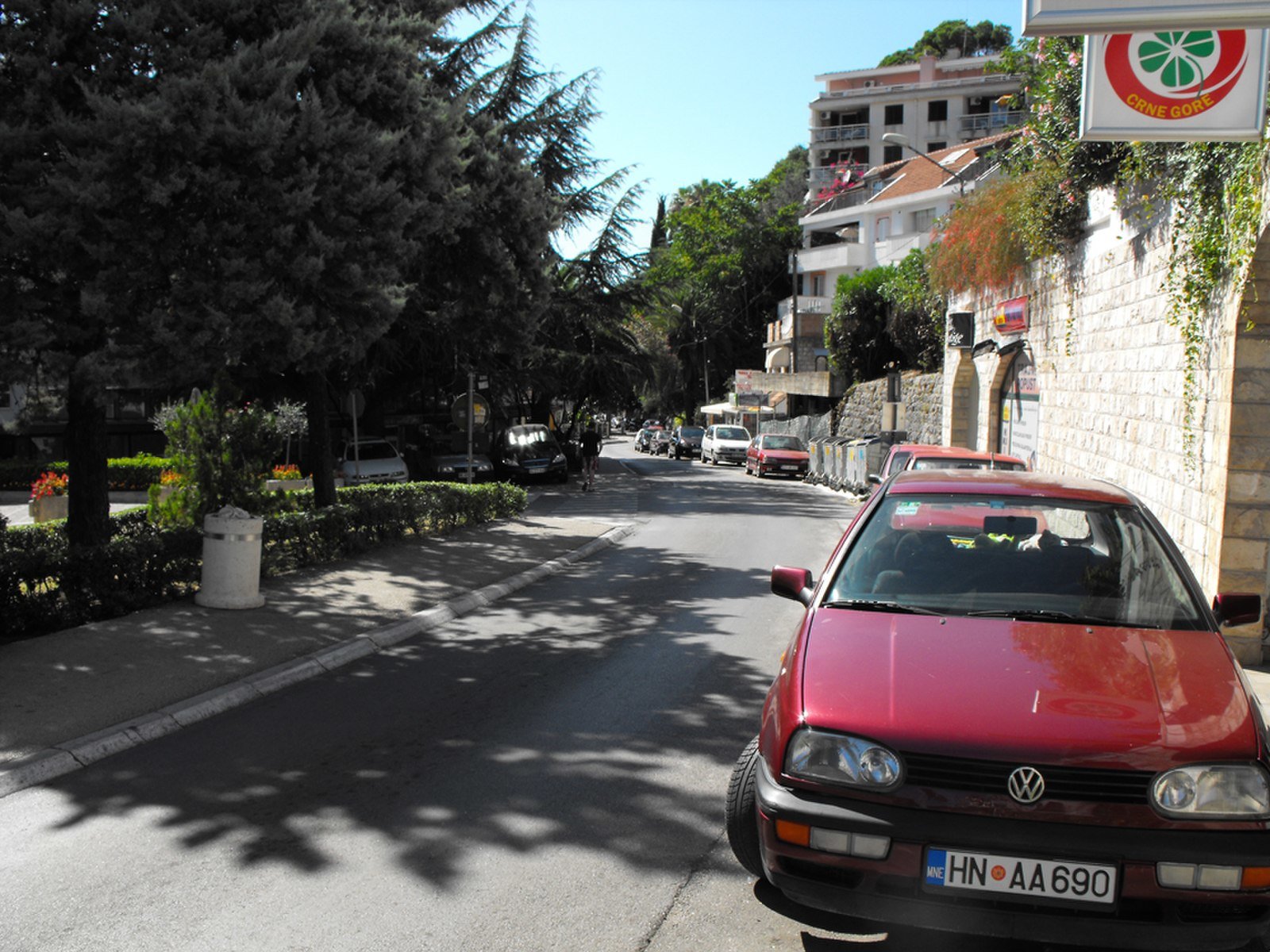 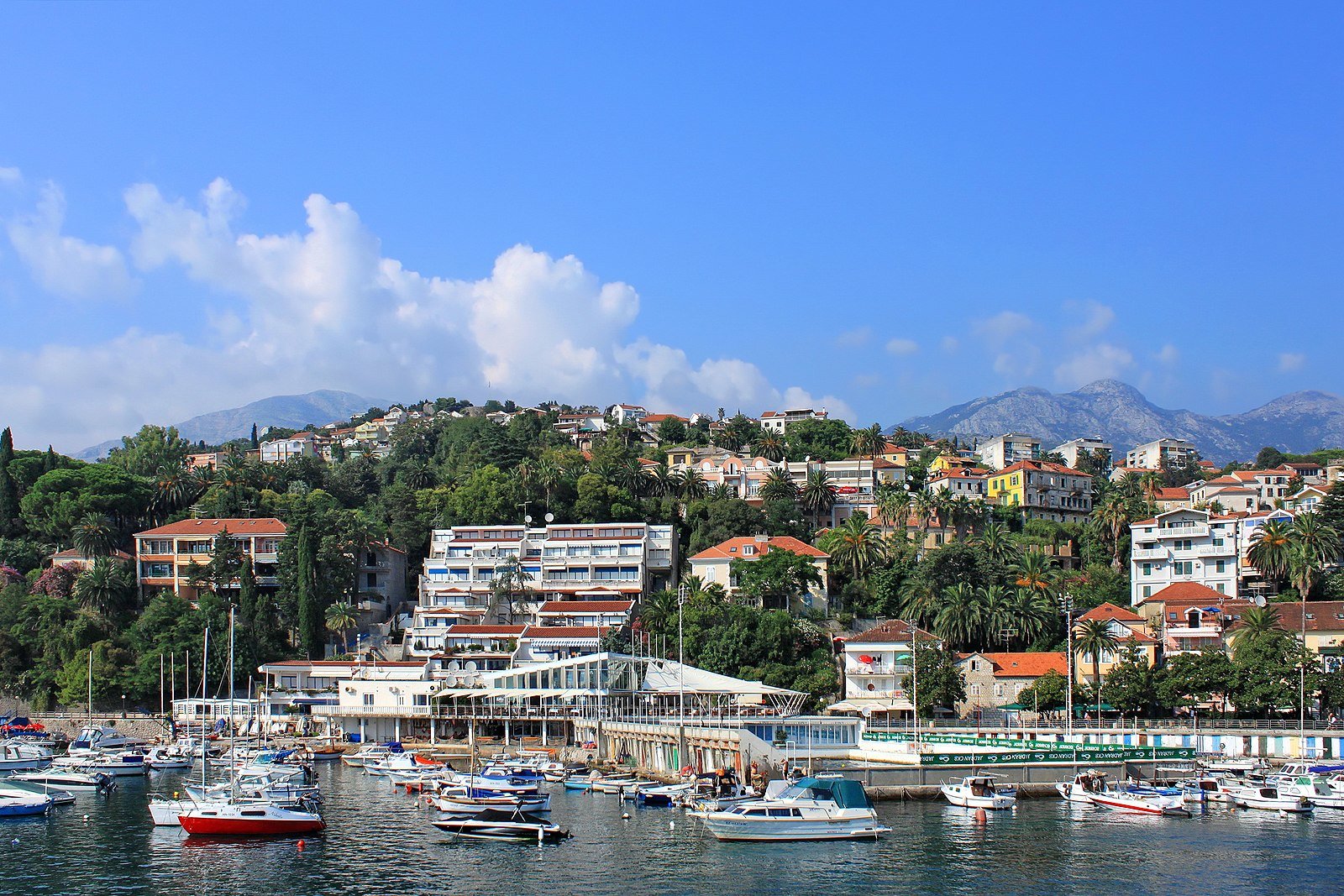 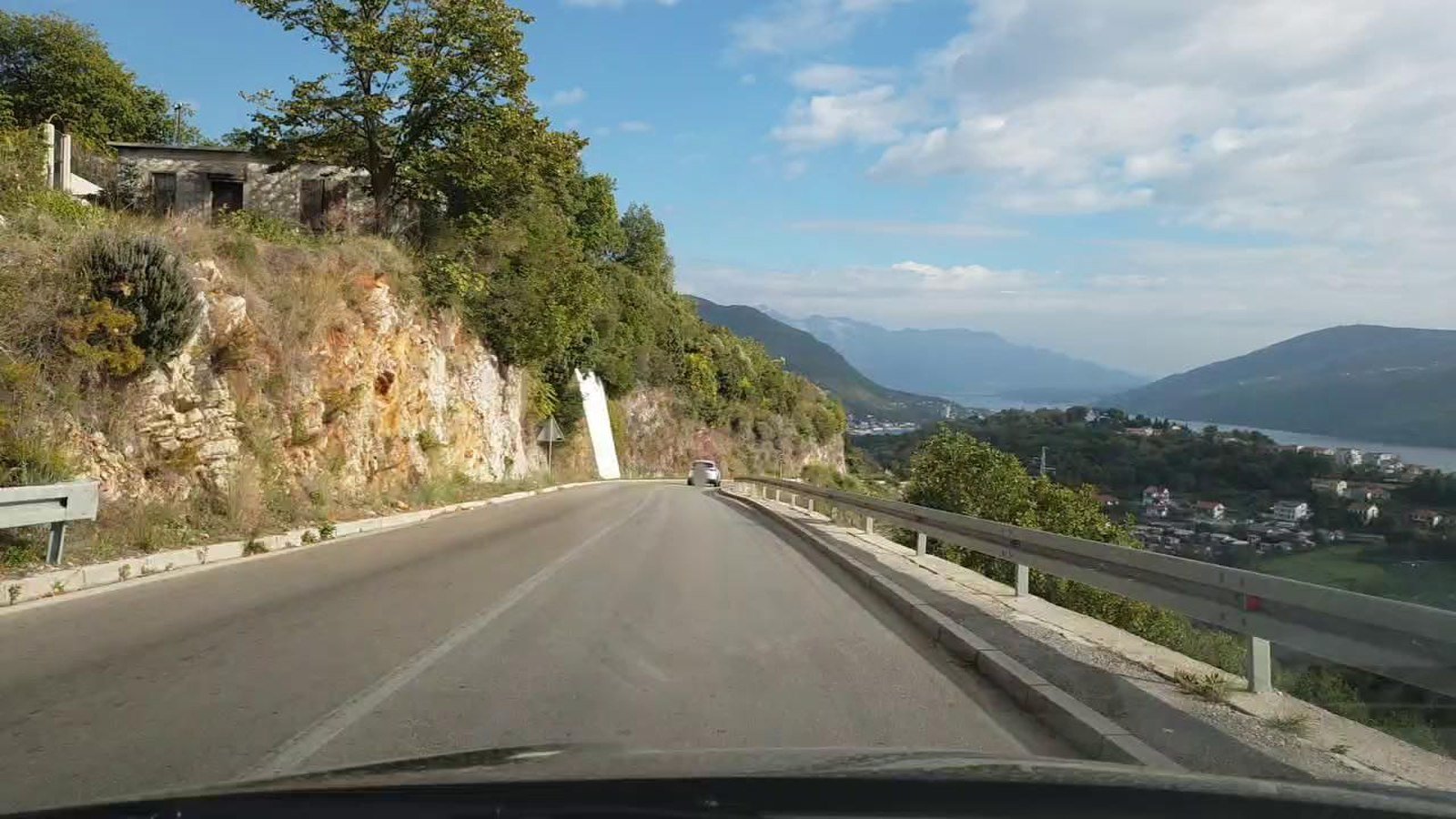 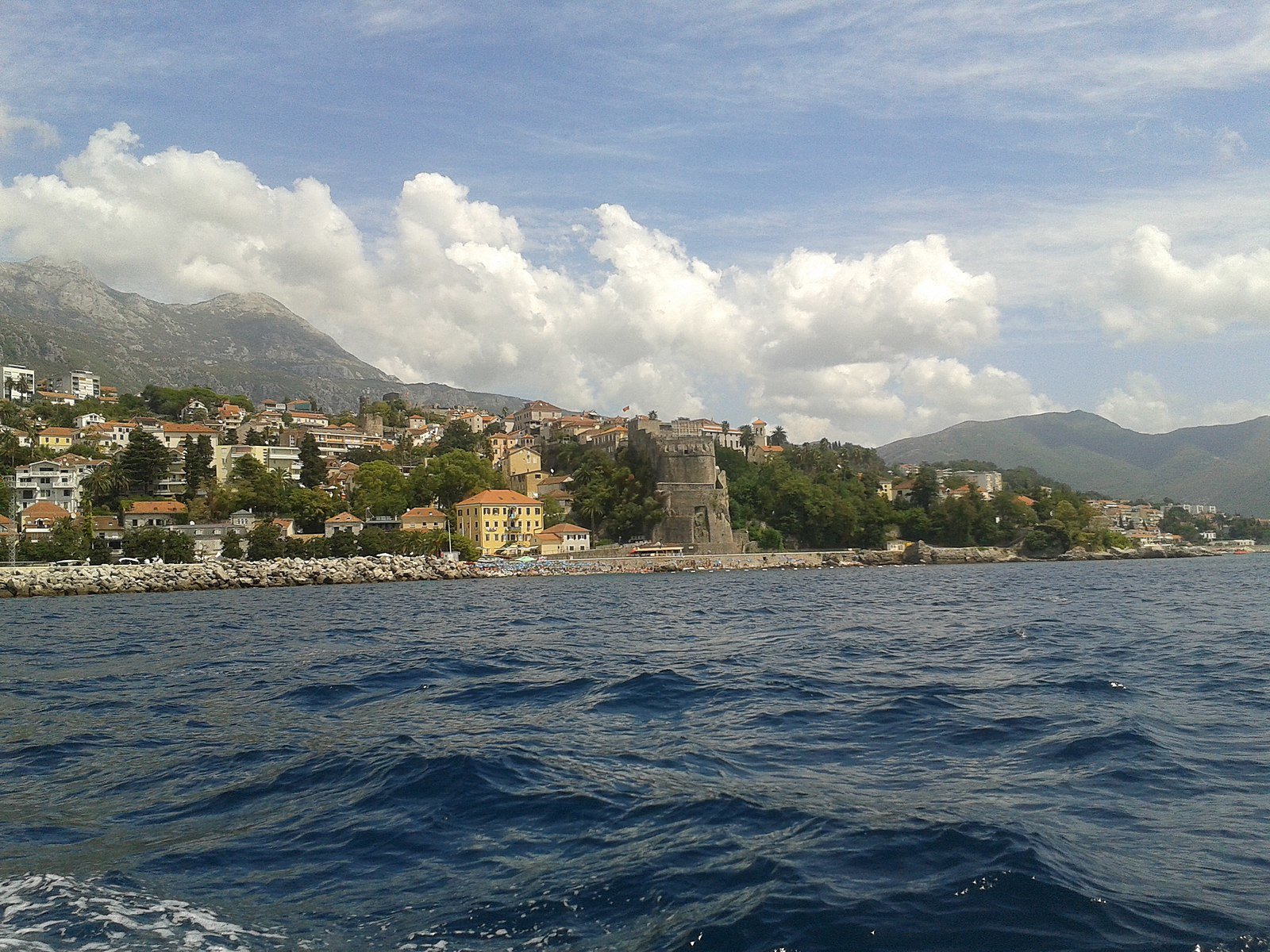 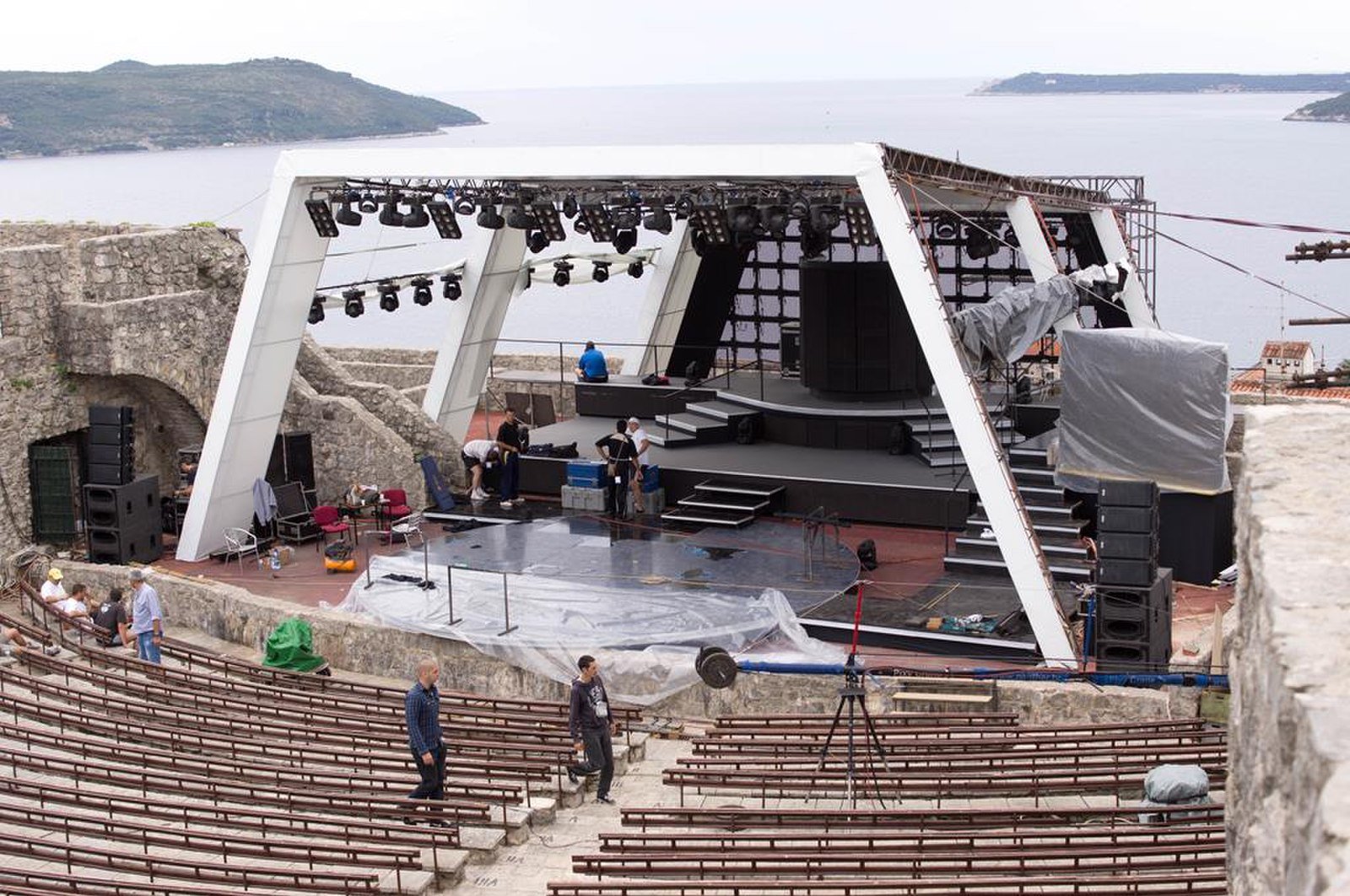 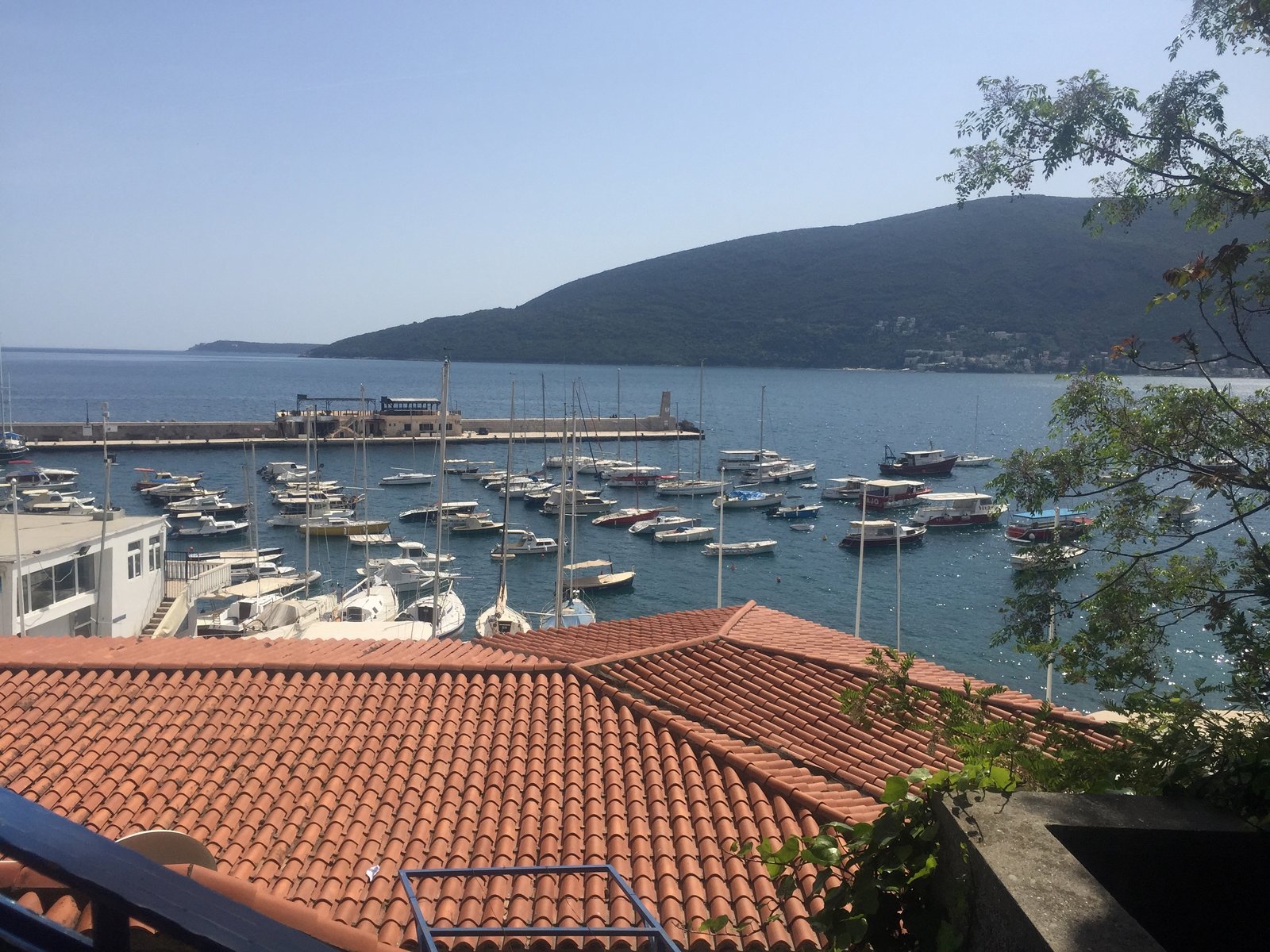 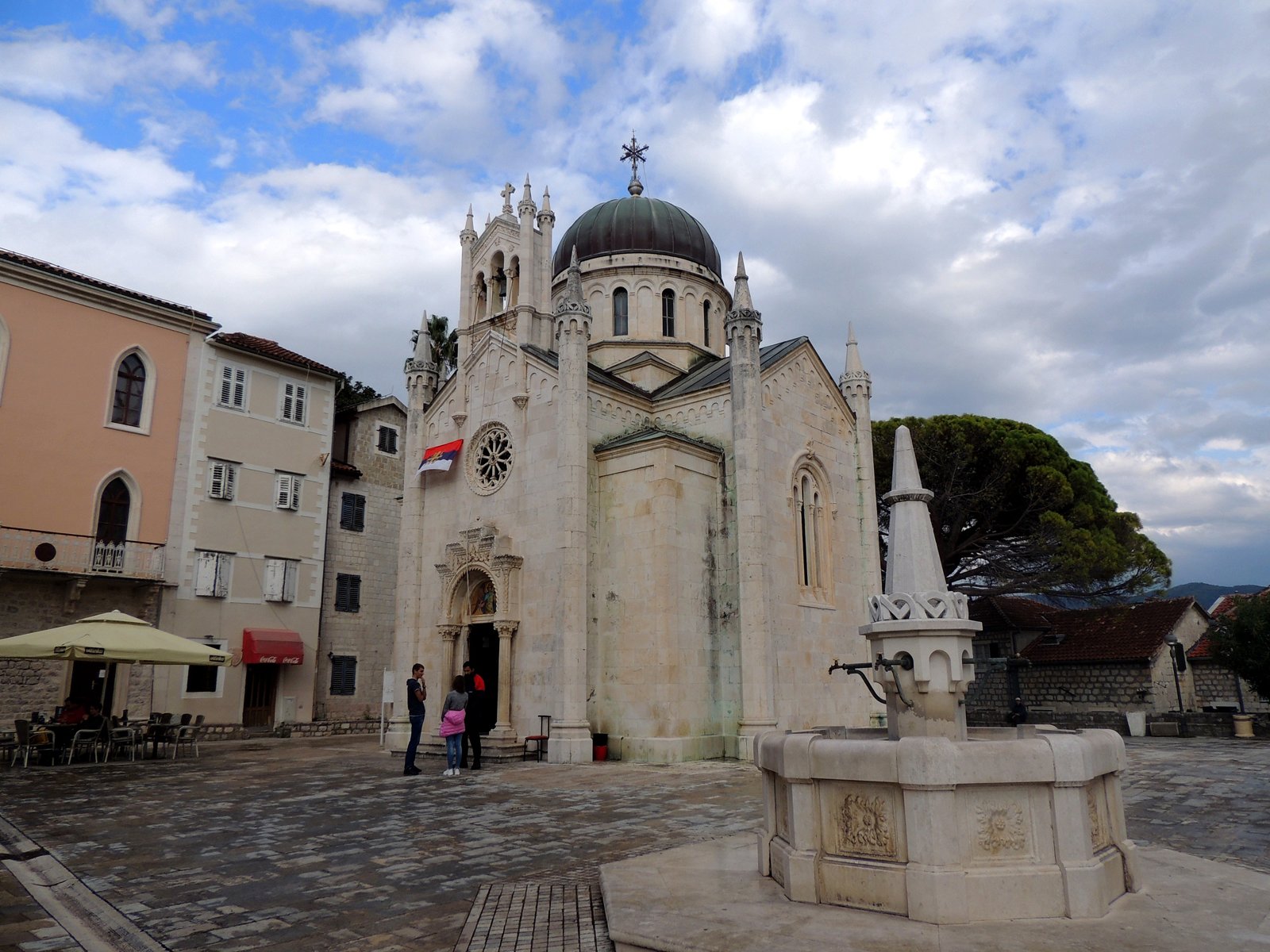 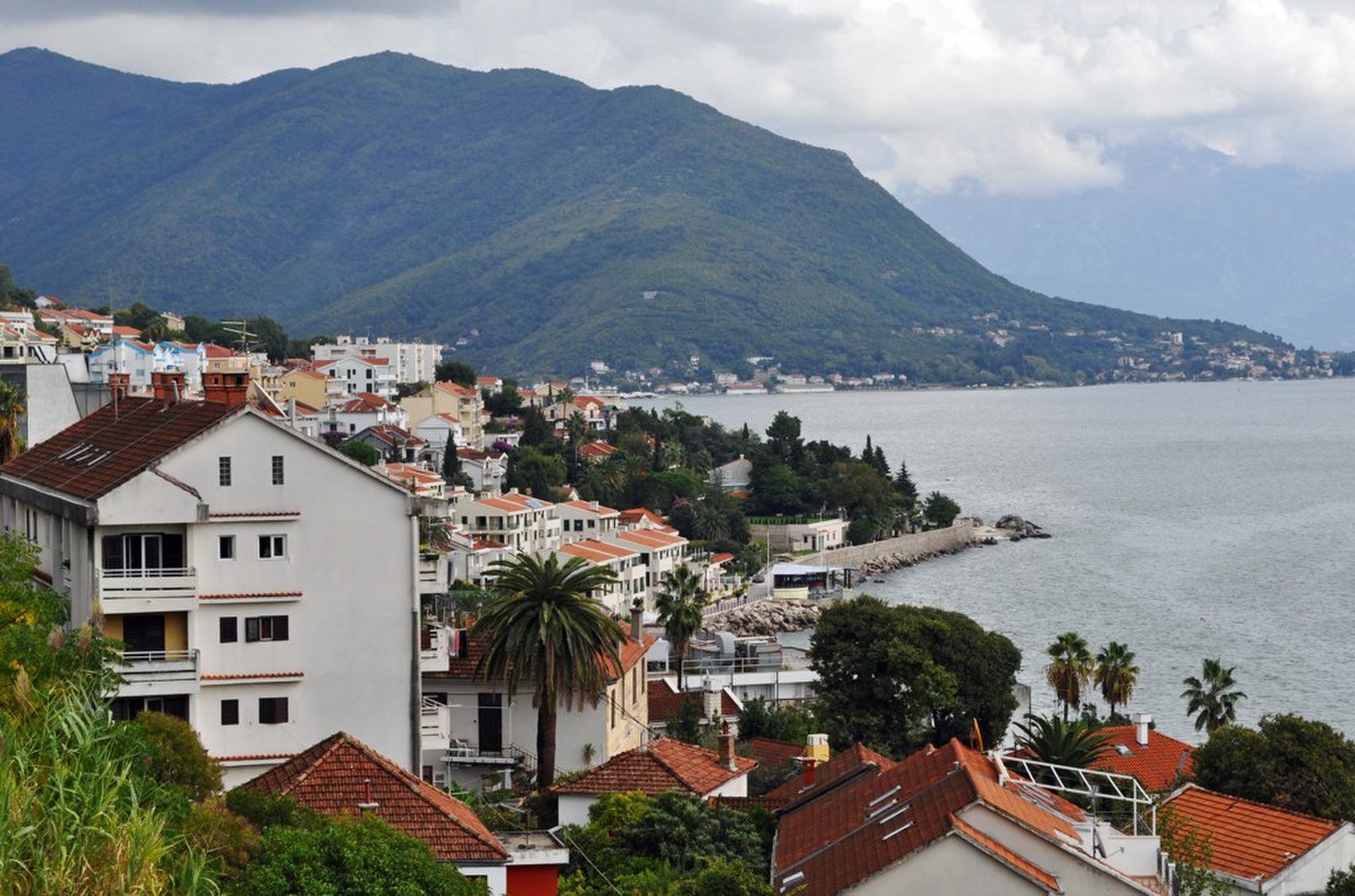 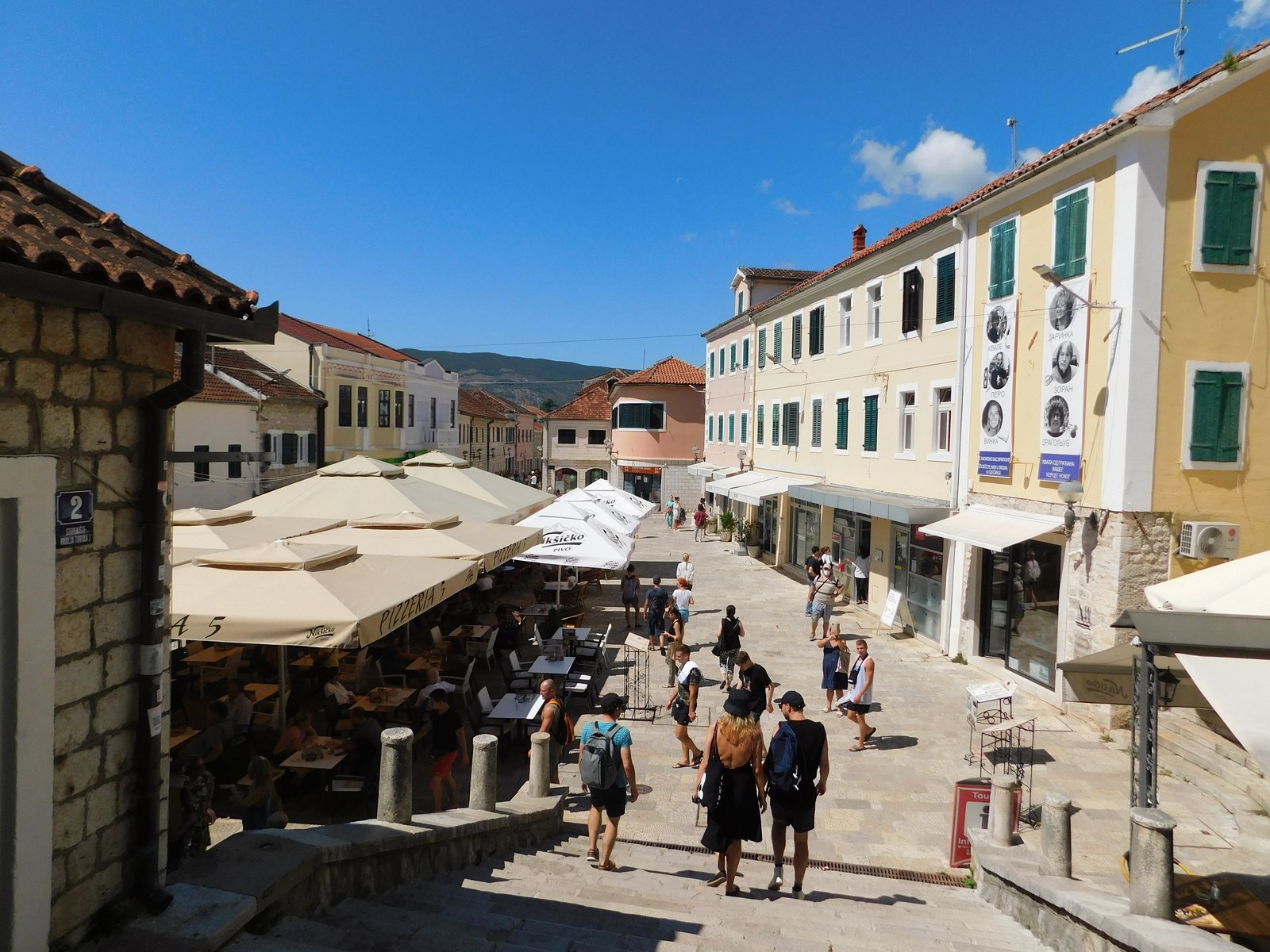 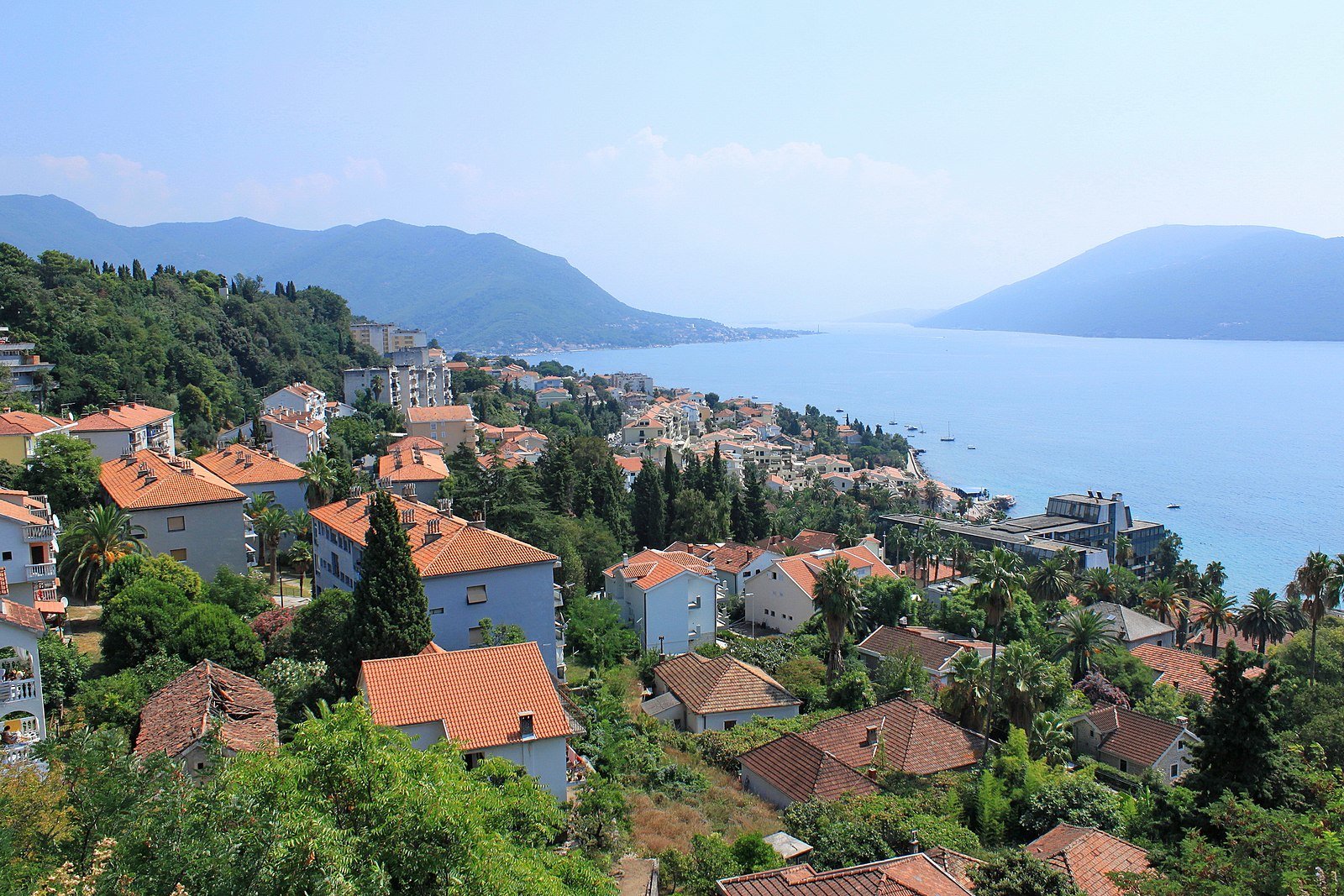 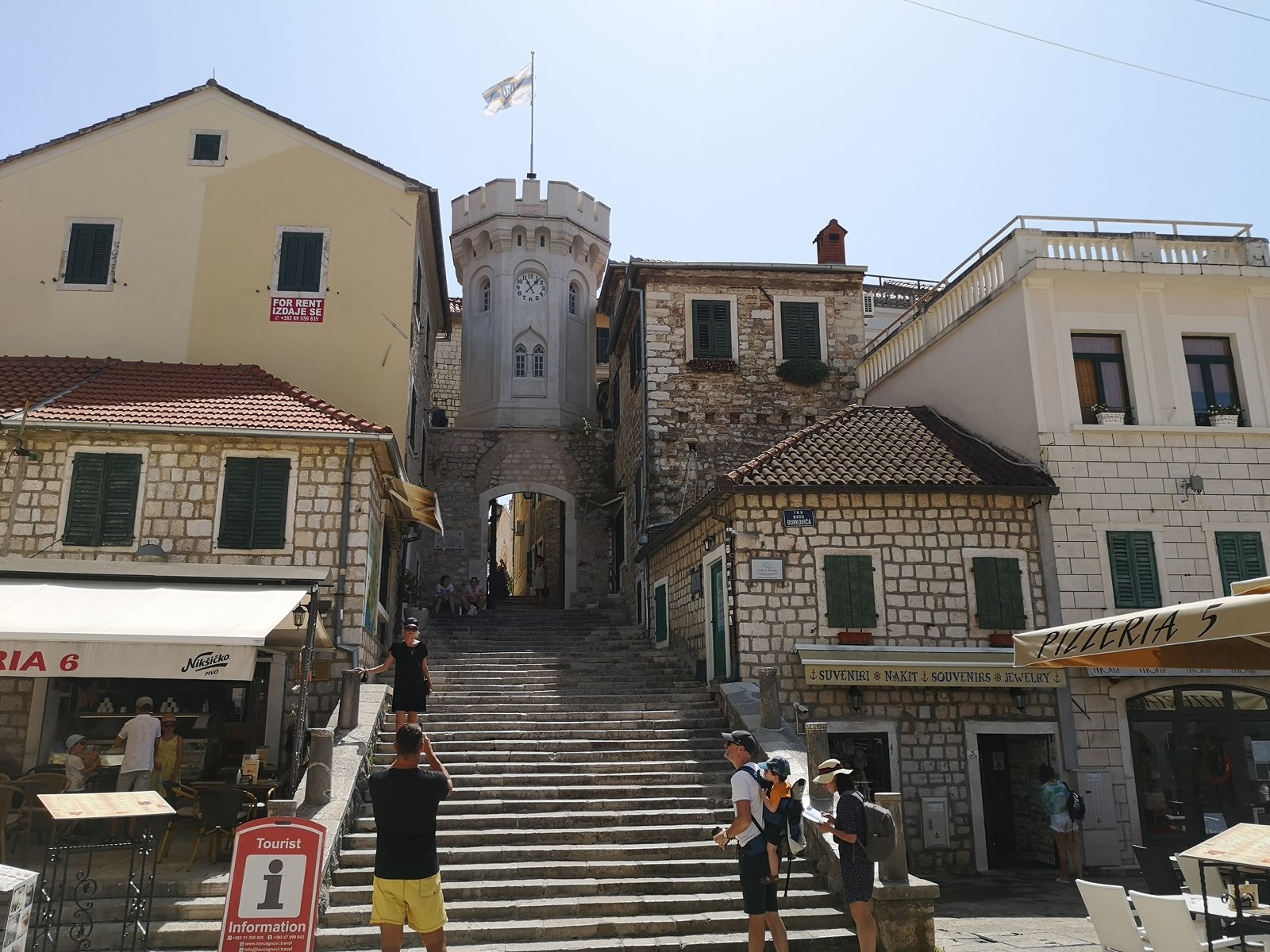 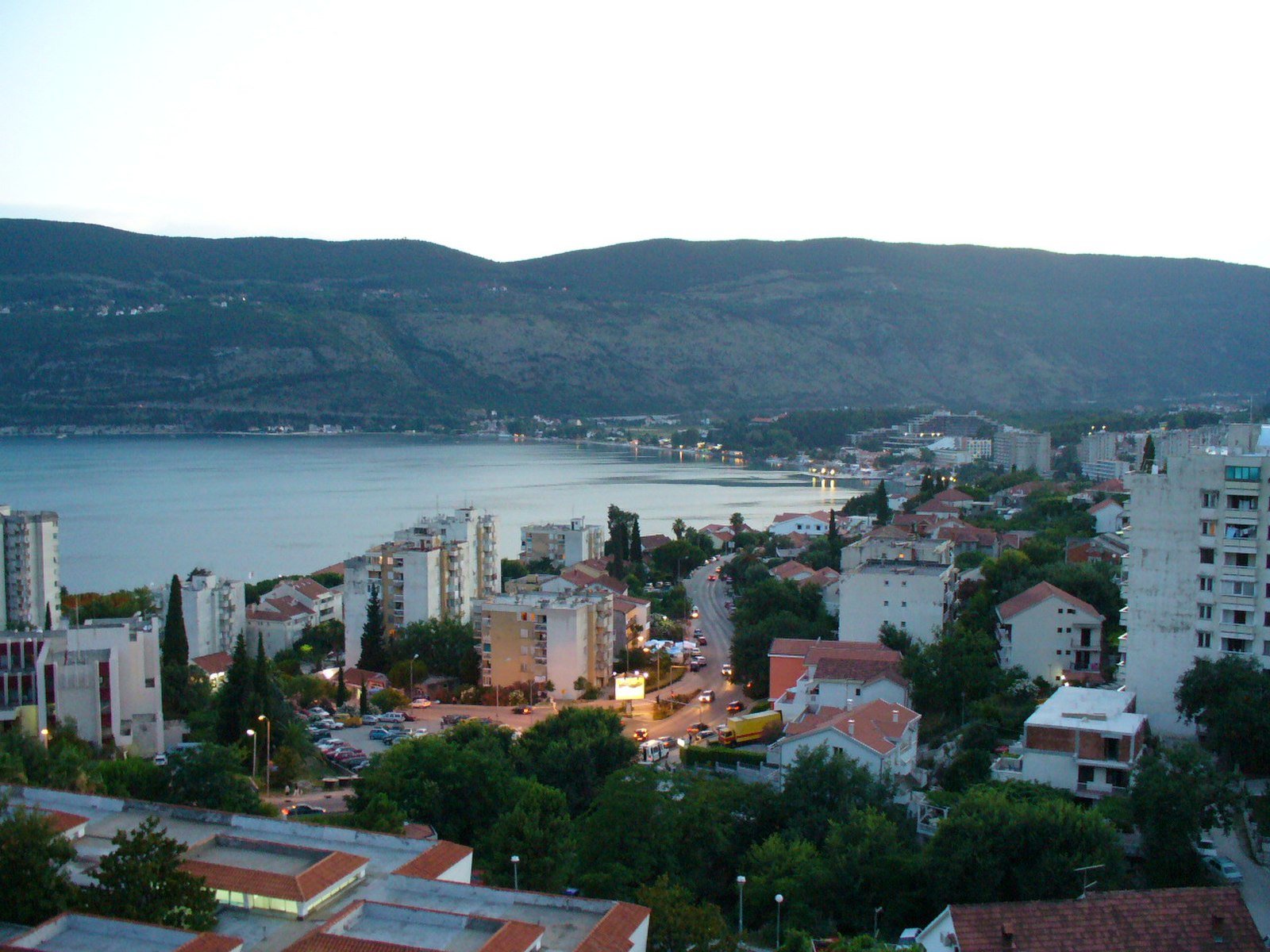 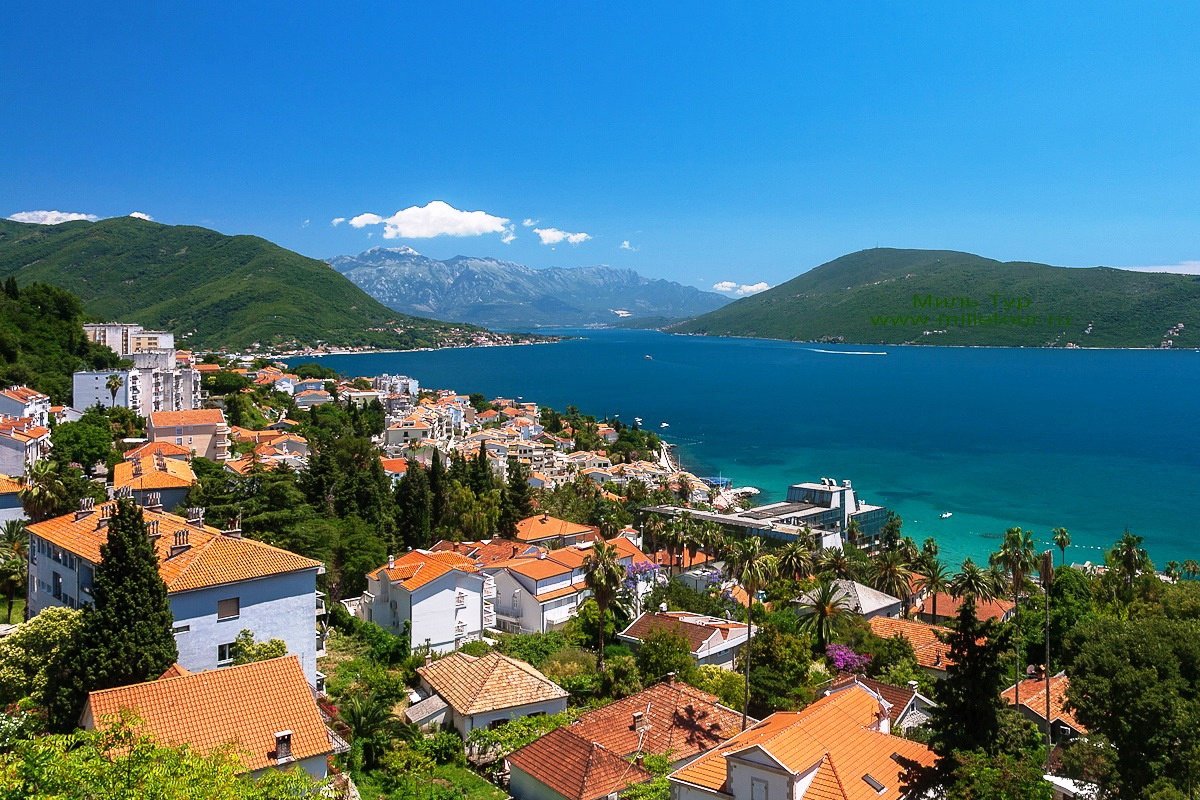 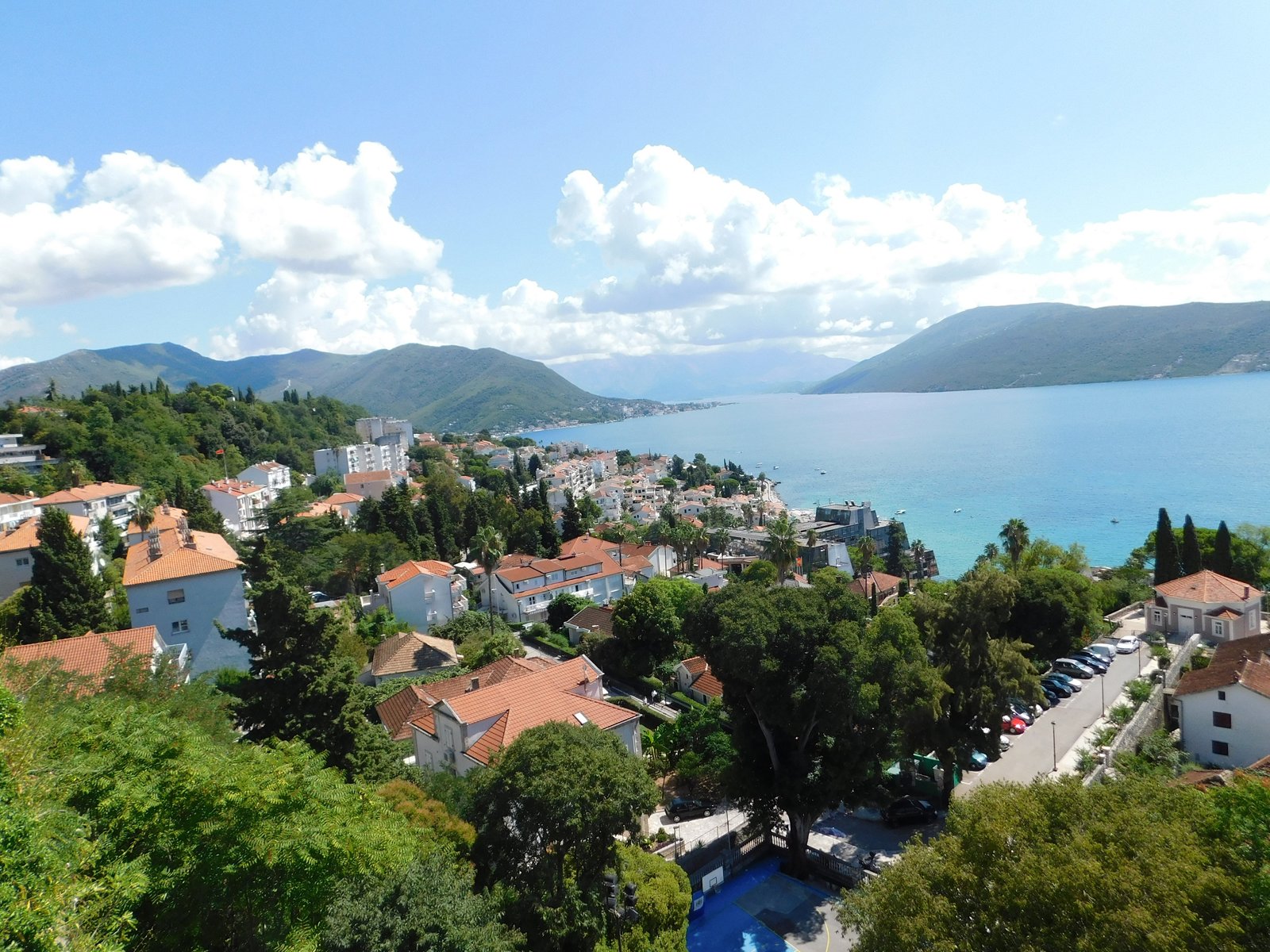 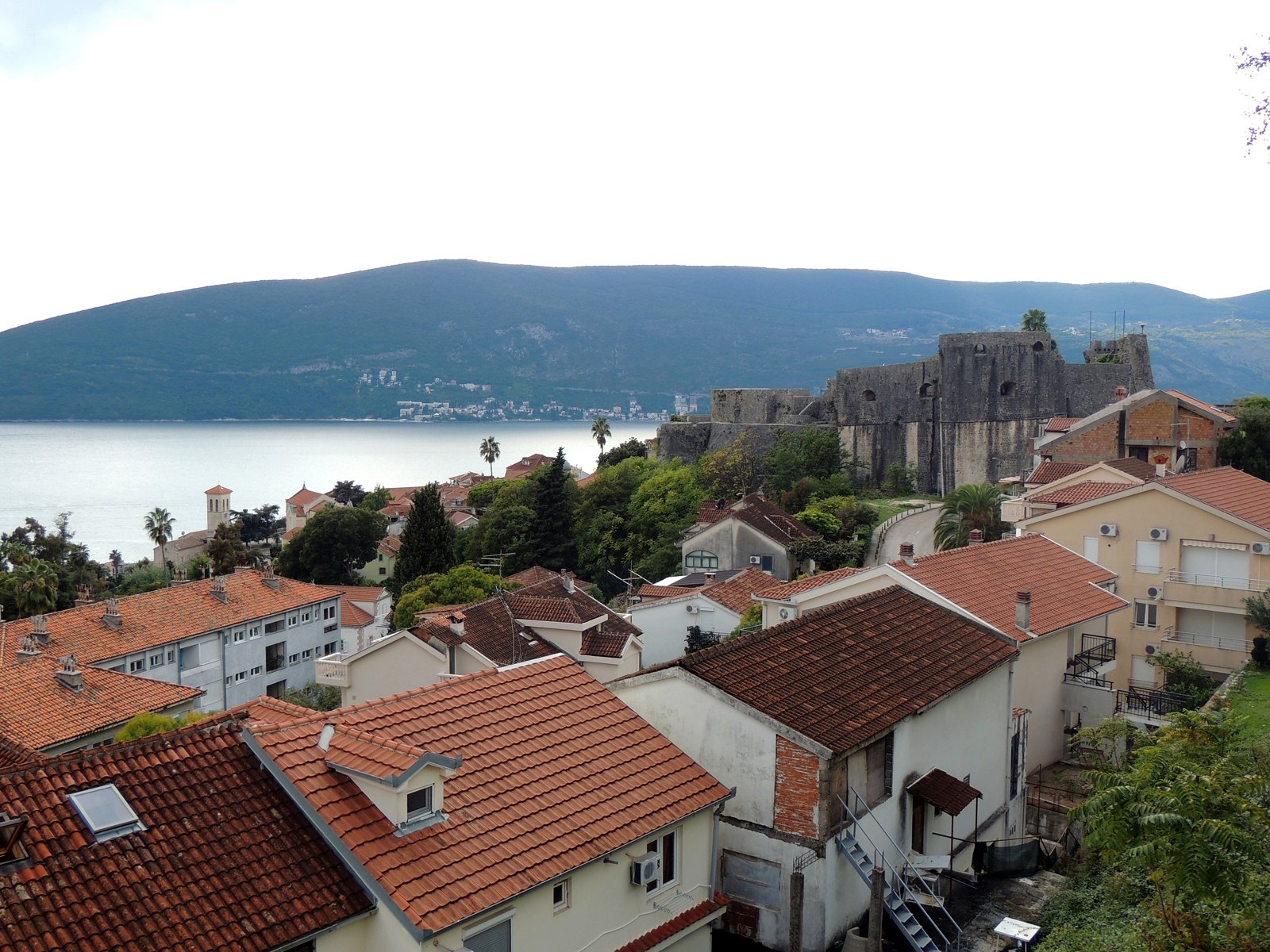