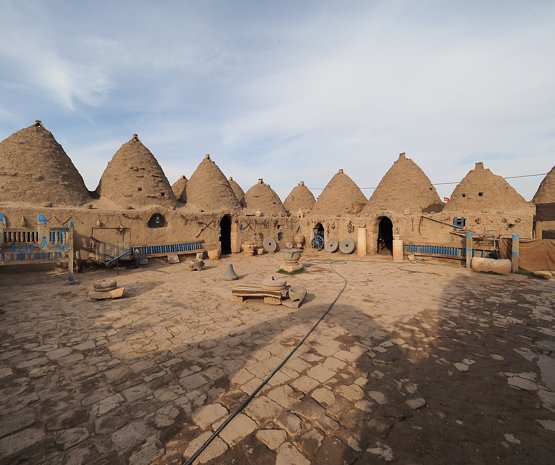 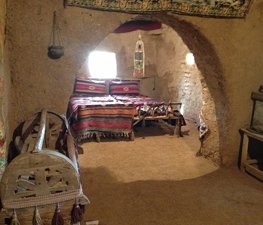 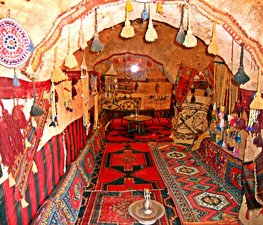 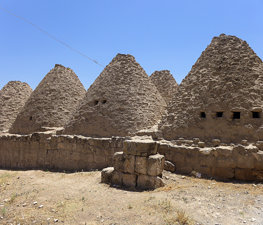 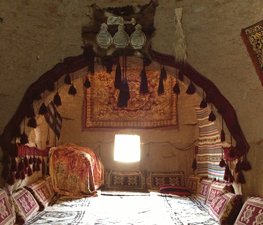 Harran, also known as Carrhae, is a district of Şanlıurfa Province in the southeast of Turkey.

in the village of Harran, Turkey.]] A very ancient city which was a major Mesopotamian commercial, cultural, and religious center, Harran is a valuable archaeological site. It is often identified as Haran, the place in which Abraham lived before he reached Canaan.

Among Harran's trading partners was Tyre (Ezekiel 27:23). One of Harran's specialties was the odoriferous gum derived from the stobrum tree .

The city was the chief home of the Mesopotamian moon-god Sin, under the Babylonians and even into Roman times.

Carrhae is a defunct ancient town on the site, and gave its name to the Battle of Carrhae (53 BC), fought between the Roman Republic and the Parthian Empire.

Harran's ruins are from Roman, Sabian, and Islamic Caliphate times. T. E. Lawrence surveyed the site, and an Anglo-Turkish excavation was begun in 1951, ending in 1956 with the death of D. S. Rice.

The district is near the border with Syria, 24 miles (44 kilometers) southeast of the city of Şanlıurfa, the former Edessa, at the end of a long straight road across the hot plain of Harran. In its prime Harran was a major Mesopotamian city which controlled the point where the road from Damascus joins the highway between Nineveh and Carchemish. This location gave Harran strategic value from an early date. It is frequently mentioned in Assyrian inscriptions as early as the time of Tiglath-Pileser I, about 1100 BC, under the name Harranu (Akkadian harrānu, "road, path; campaign, journey"). After the Suppiluliuma I-Shattiwaza treaty between the Hittite Empire and Mitanni, Harran was burned by a Hittite army under Piyashshili in the course of the conquest of Mitanni.

Sacked in 763 BCE, Harran was restored under the Assyrian ruler Sargon II. It served for two years as the headquarters for the then–crumbling Assyrian Empire after the fall of its capital Nineveh in 612 BCE.

Sin's temple was rebuilt by several kings, among them the Assyrian Assur-bani-pal (7th century BCE) and the Neo-Babylonian Nabonidus (6th century BCE). Herodian (iv. 13, 7) mentions the town as possessing in his day a temple of the moon.

It is said that Adam and Eve set foot in Harran after they were expelled from the Garden of Eden.

The Hebrew Bible's book of Genesis (Genesis 11:31, 12:4-5) identifies a place called Haran (also Harran, Charan, and Charran; עברית. חָרָן), where Terah and his son Abram, grandson Lot and Abram's wife Sarai halted on their way from Ur of the Chaldees to Canaan. Some scholars identify the Biblical Haran with Harran. Genesis 27:43 makes Haran the home of Laban and connects it with Isaac and Jacob: Jacob spent 20 years in Haran working for his uncle Laban (cf. Genesis 31:38&41). The place-name should not be confused with Haran (Hebrew: הָרָן), Abraham's brother and Lot's father — note that the two names are spelled differently in the original Hebrew.

During the reign of King Hezekiah of Judah, Harran rebelled from the Assyrians, who reconquered the city (2 Kings 19:12; Isaiah 37:12) and deprived it of many privileges which king Sargon II later restored.

During the fall of the Neo-Assyrian Empire, Harran became the stronghold of its last king, Ashur-uballit II, being besieged and conquered by Nabopolassar of Babylon in 609 BC. Harran became part of Median Empire after the fall of Assyria, and subsequently passed to the Persian Achaemenid dynasty. The city remained Persian until 331 BC, when the soldiers of the Macedonian conqueror Alexander the Great entered the city.

After the death of Alexander on June 11, 323 BC, the city was contested by his successors: Perdiccas, Antigonus Monophthalmus, and Eumenes visited the city, but eventually it became part of the realm of Seleucus I Nicator, of the Seleucid Empire, and capital of a province called Osrhoene (the Greek rendering of the old name Urhai). For a century-and-a-half, the town flourished, and it became independent when the Parthian dynasty of Persia occupied Babylonia. The Parthian and Seleucid kings were both happy with a buffer state, and the dynasty of the Arabian Abgarides, technically a vassal of the Parthian "king of kings", was to rule Osrhoene for centuries.

In Roman times, Harran was known as Carrhae, and was the location of the Battle of Carrhae in 53 BC, in which the Parthians, commanded by general Surena, defeated three Roman legions under the command of Crassus, who was captured.

Centuries later, the emperor Caracalla was murdered here at the instigation of Macrinus (217). The emperor Galerius was defeated nearby by the Parthians' successors, the Sassanid dynasty of Persia, in 296 AD. The city remained under Persian control until the fall of the Sassanids to the Arabs in 651 AD.

Harran was a centre of Christianity from early on, the first place where purpose-built churches were constructed openly. However although a bishop resided in the city, many people of Harran retained their ancient pagan faith during the Christian period, and thus the Sabian culture was born here in Harran.

At the beginning of the Islamic period Harran was located in the land of the Mudar tribe (Diyar Mudar), the western part of northern Mesopotamia (Jazira). Along with ar-Ruha' (Şanlıurfa) and Ar-Raqqah it was one of the main cities in the region. During the reign of the Umayyad caliph Marwan II Harran became the seat of the caliphal government of the Islamic empire stretching from Spain to Central Asia.

It was allegedly the Abbasid caliph al-Ma'mun passing through Harran on his way to a campaign against Byzantium who forced the Harranians to convert to either one of the 'religions of the book', meaning Judaism, Christianity, or Islam. The people of Harran identified themselves with the Sabians in order to fall under the protection of Islam. Sabians were mentioned in the Qur'an, but those were a group of Gnostic Mandaeans living in southern Iraq who were extinct at the time of al-Ma'mun. The relationship of the Harranian Sabians to the ones mentioned in the Qur'an is a matter of dispute.

During the late 8th and 9th century Harran was a centre for translating works of astronomy, philosophy, natural sciences and medicine from Greek to Syriac by Assyrians and thence to Arabic, bringing the knowledge of the classical world to the emerging Arabic-speaking civilization in the south. Baghdad came to this work later than Harran. Many important scholars of natural science, astronomy, and medicine originate from Harran which were non-Arab and non-Islamic Assyrians, including possibly the alchemist Geber.

The end of the Sabians

In 1032 or 1033 the temple of the Sabians was destroyed and the urban community extinguished by an uprising of the rural, starving 'Alid-Shiite population and impoverished urban Muslim militias. In 1059-60 the temple was rebuilt into a fortified residence of the Numayrids, an Arab tribe assuming power in the Diyar Mudar (western Jazira) during the 11th century. The Zangid ruler Nur al-Din Mahmud transformed the residence into a strong fortress.

During the Crusades, on May 7, 1104 a decisive battle was fought in the Balikh river valley, commonly known as the Battle of Harran. However, according to Matthew of Edessa the actual location of the battle lies two days away from Harran. Albert of Aachen and Fulcher of Chartres locate the battleground in the plain opposite to the city of ar-Raqqah. During the battle, Baldwin of Bourcq, Count of Edessa, was captured by troops of the Great Seljuq Empire. After his release Baldwin became King of Jerusalem.

At the end of 12th century Harran served together with ar-Raqqah as a residence of Ayyubid princes. The Ayyubid ruler of the Jazira, Al-Adil I, again strengthened the fortifications of the castle. In the 1260s the city was completely destroyed and abandoned during the Mongol invasions of Syria. The father of the famous Hanbalite scholar Ibn Taymiyyah was a refugee from Harran, settling in Damascus. The 13th century Arab historian Abu al-Fida describes the city in ruins.

Harran is famous for its traditional 'beehive' adobe houses, constructed entirely without wood. The design of these makes them cool inside (essential in this part of the world) and is thought to have been unchanged for at least 3,000 years. Some were still in use as dwellings until the 1980s. However, those remaining today are strictly tourist exhibits, while most of Harran's population lives in a newly built small village about 2 kilometres away from the main site.

At the historical site the ruins of the city walls and fortifications are still in place, with one city gate standing, along with some other structures. Excavations of a nearby 4th century BC burial mound continue under archaeologist Dr Nurettin Yardımcı.

The new village is poor and life is hard in the hot weather on this plain. The people here are ethnic Arabs and live by long-established traditions. It is believed that these Arabs were settled here during the 18th century by the Ottoman Empire. Typically families consist of 10-15 children.Шаблон:Fact The women of the village are tattooed and dressed in traditional Bedouin cloths.

By the late 1980s the large plain of Harran had fallen into disuse as the streams of Cüllab and Deysan, its original water-supply had dried up. But the plain is irrigated by the recent Southeastern Anatolia Project and is becoming green again. Cotton and rice can now be grown.

Elif
There is no specific "site" in the village. Whole village is the ancient civilization itself! Typical architecture of the Harran houses is unique. (45min drive from Urfa city center)

Halabiye (Arabic الحلابيا) a fortress is found on the shores Euphrat 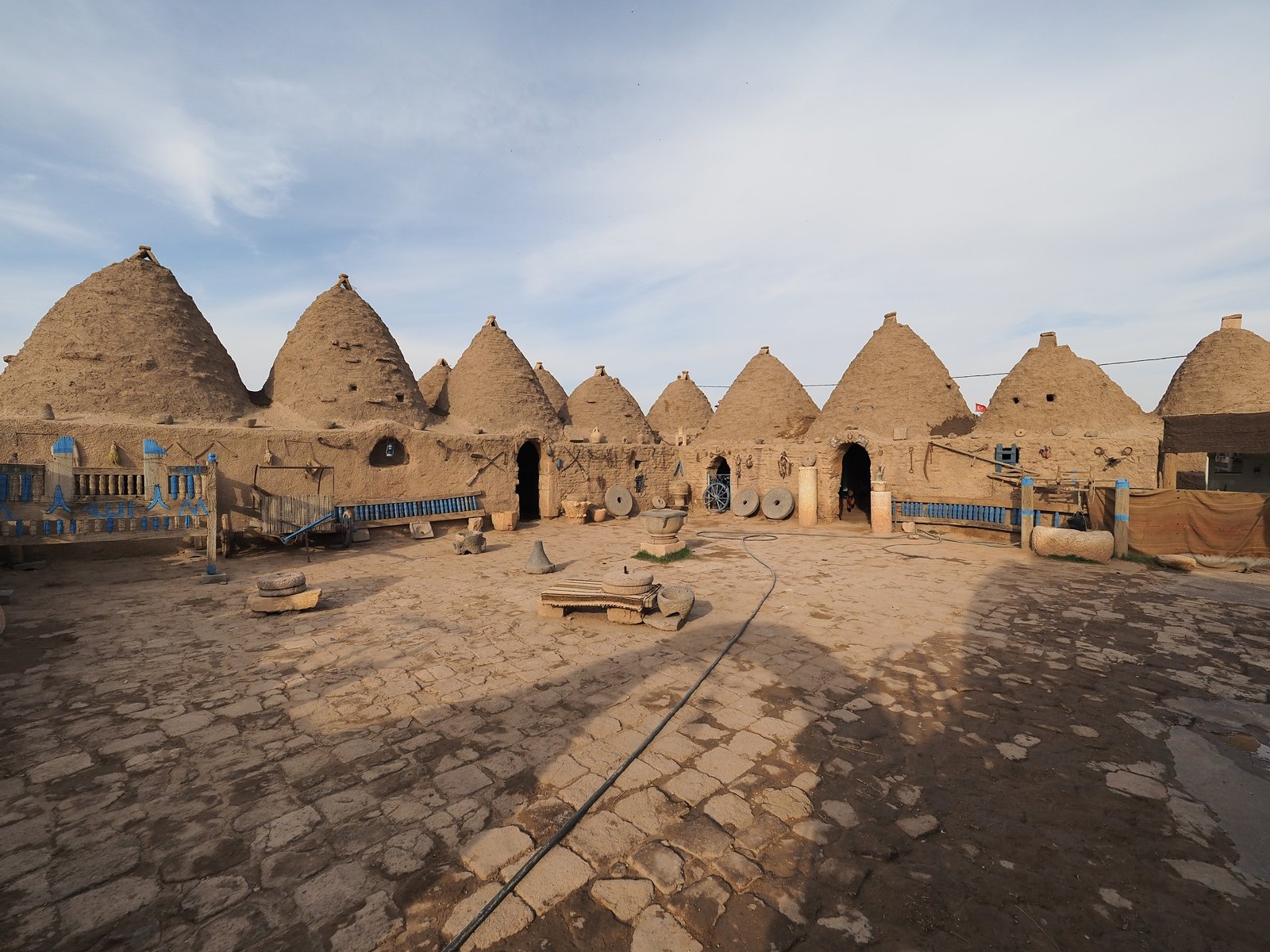 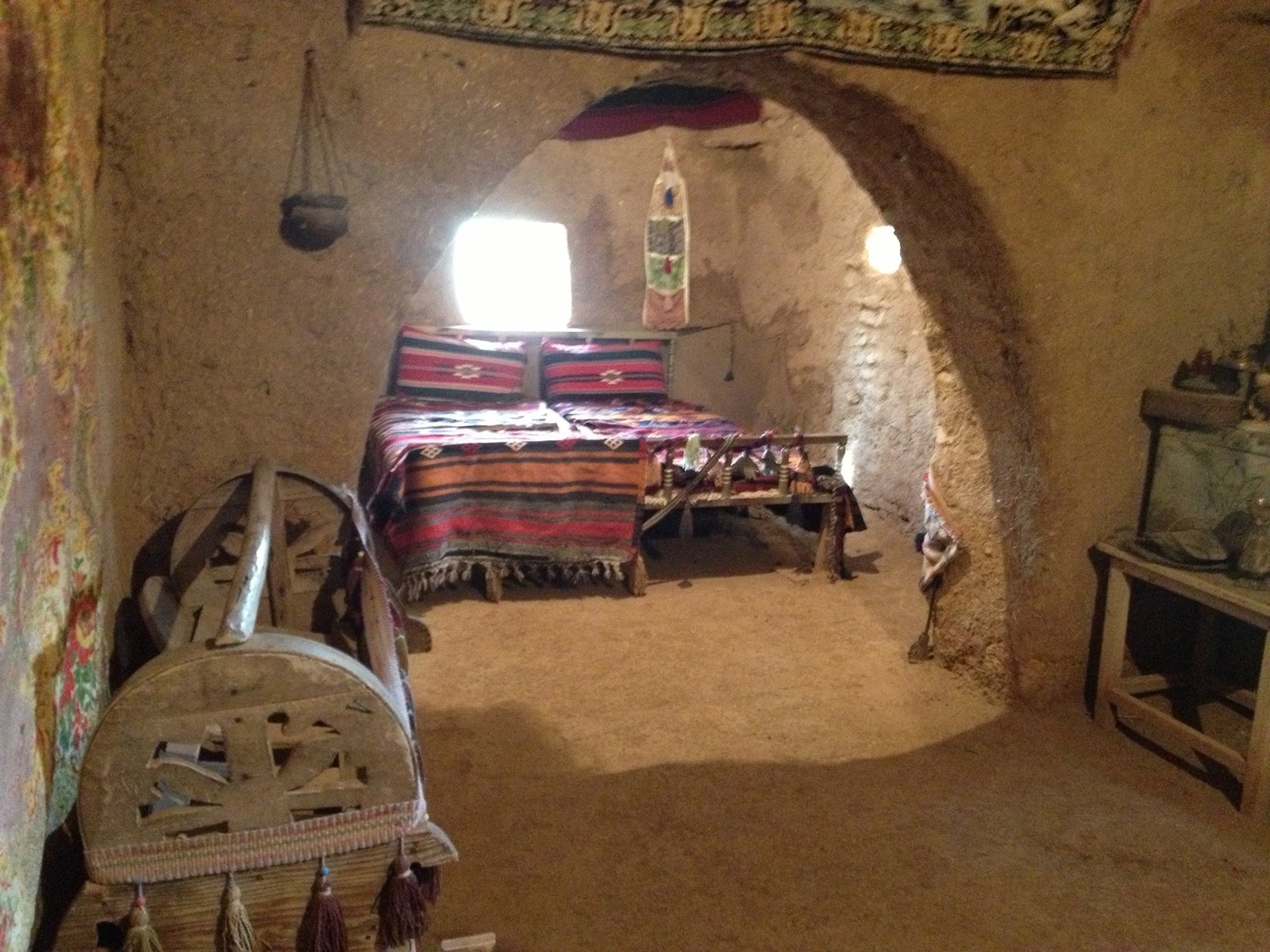 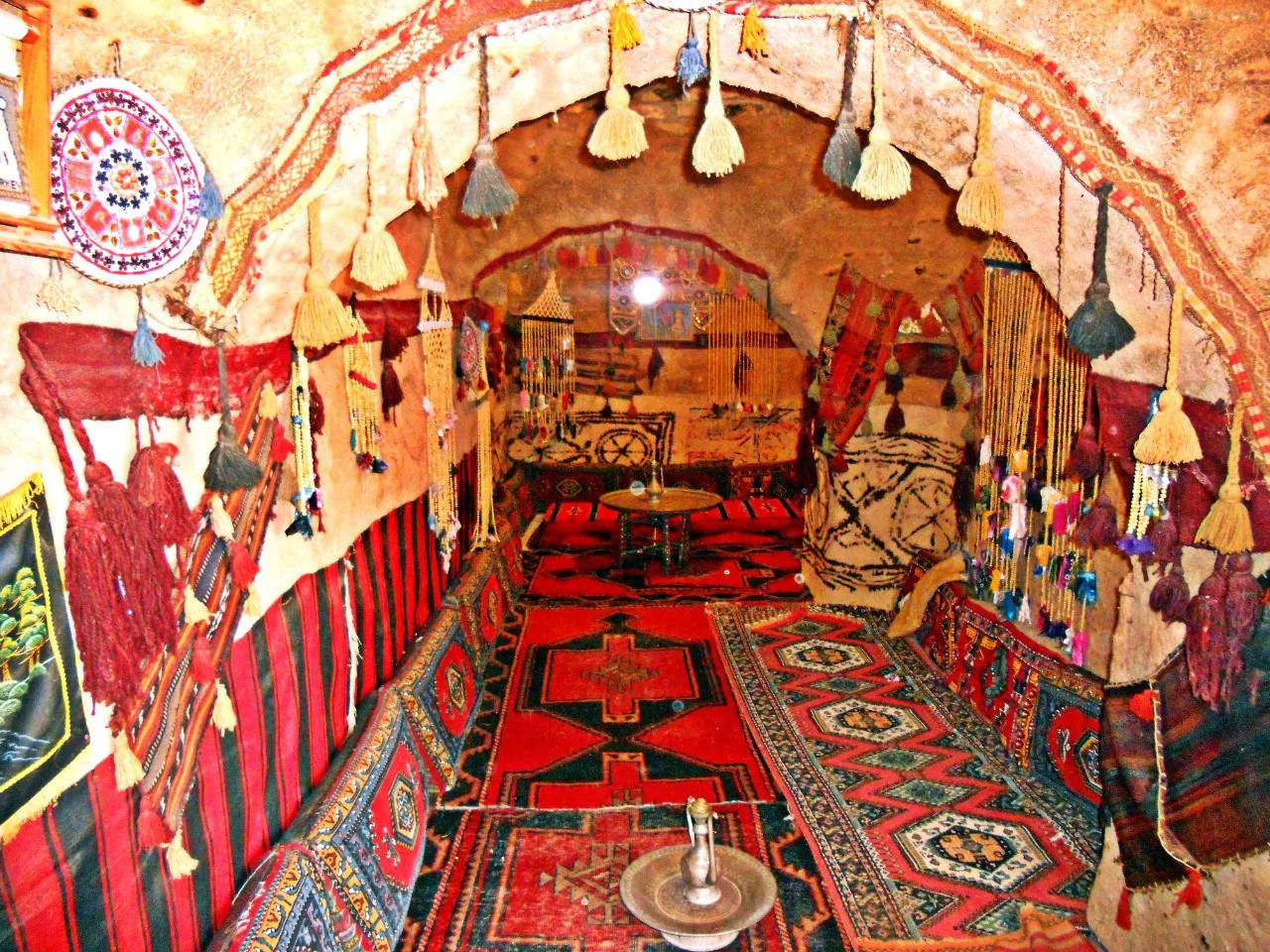 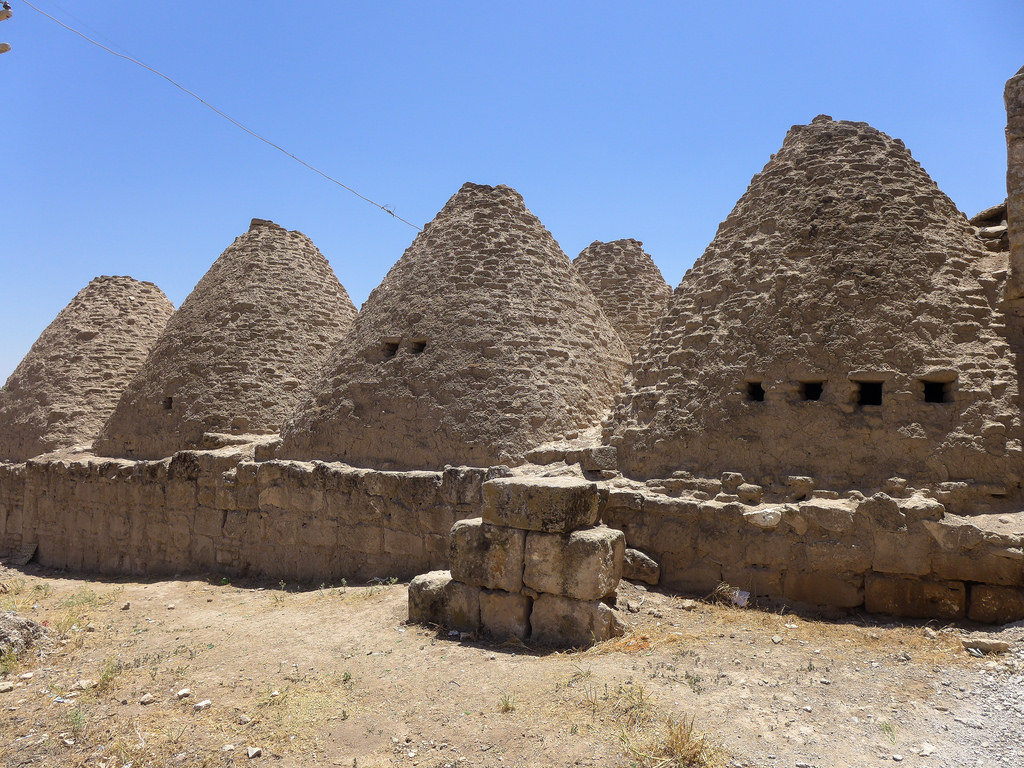 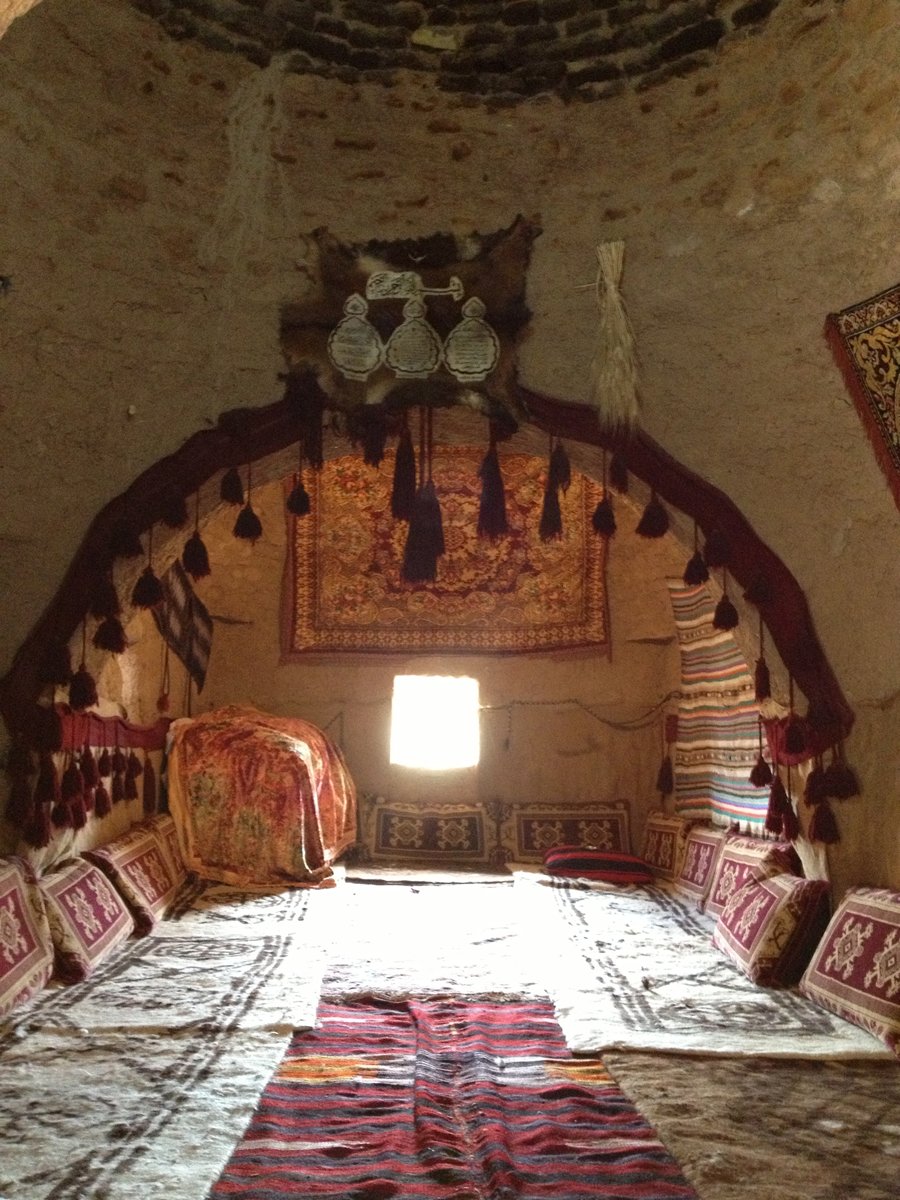 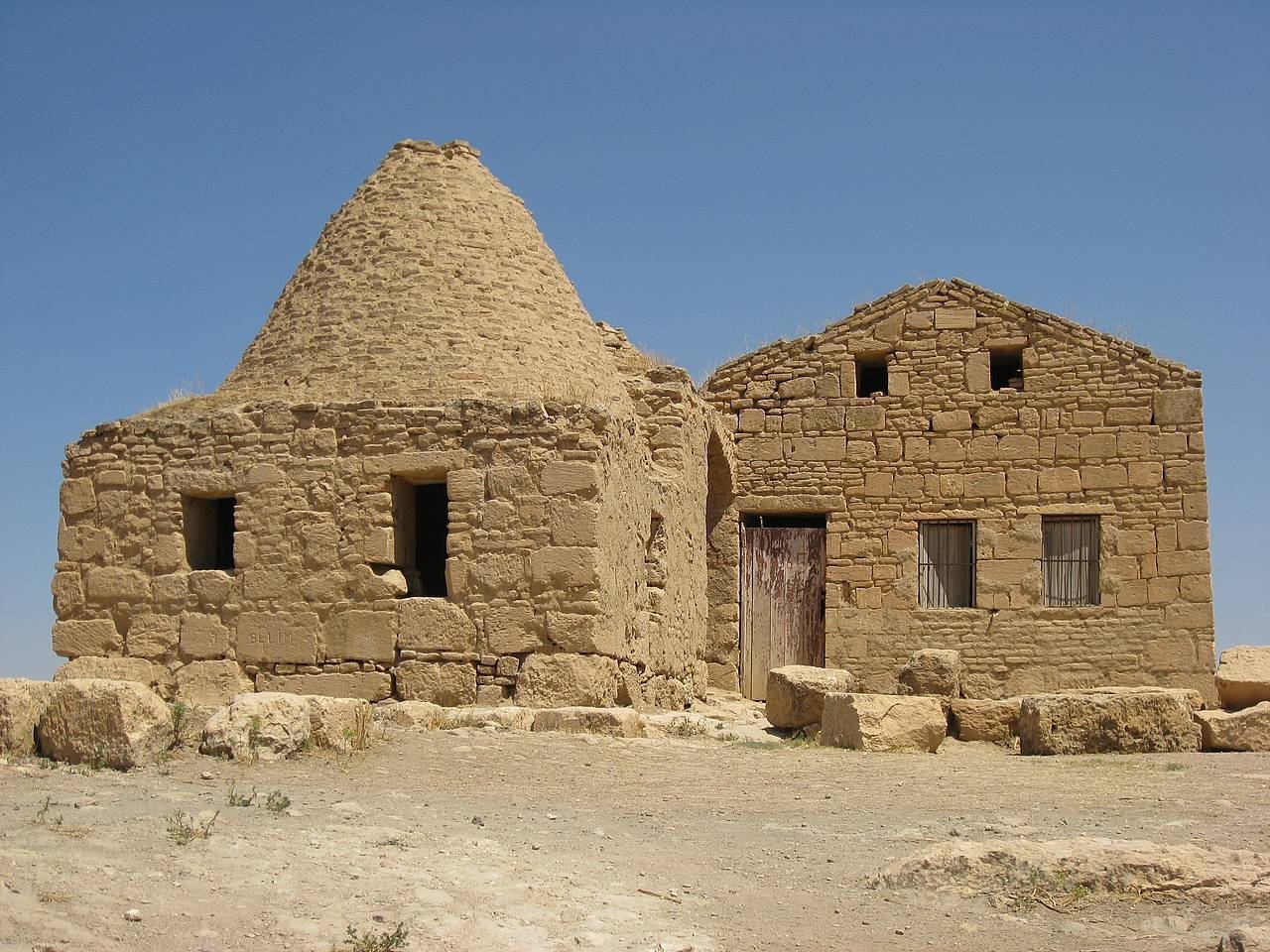 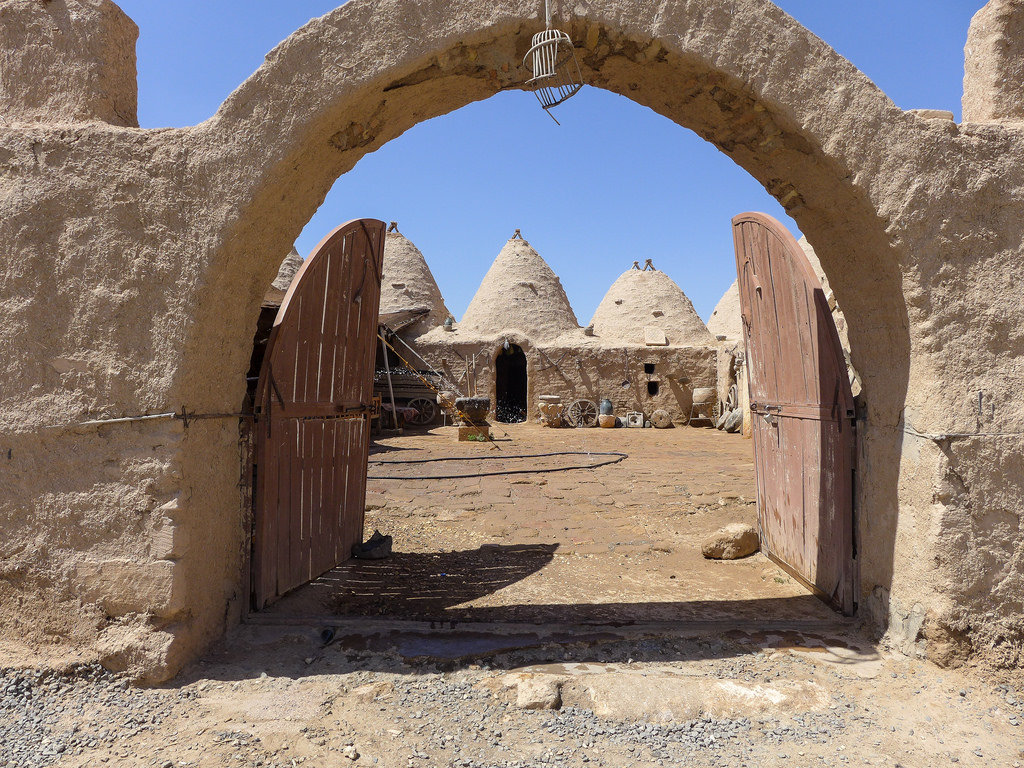 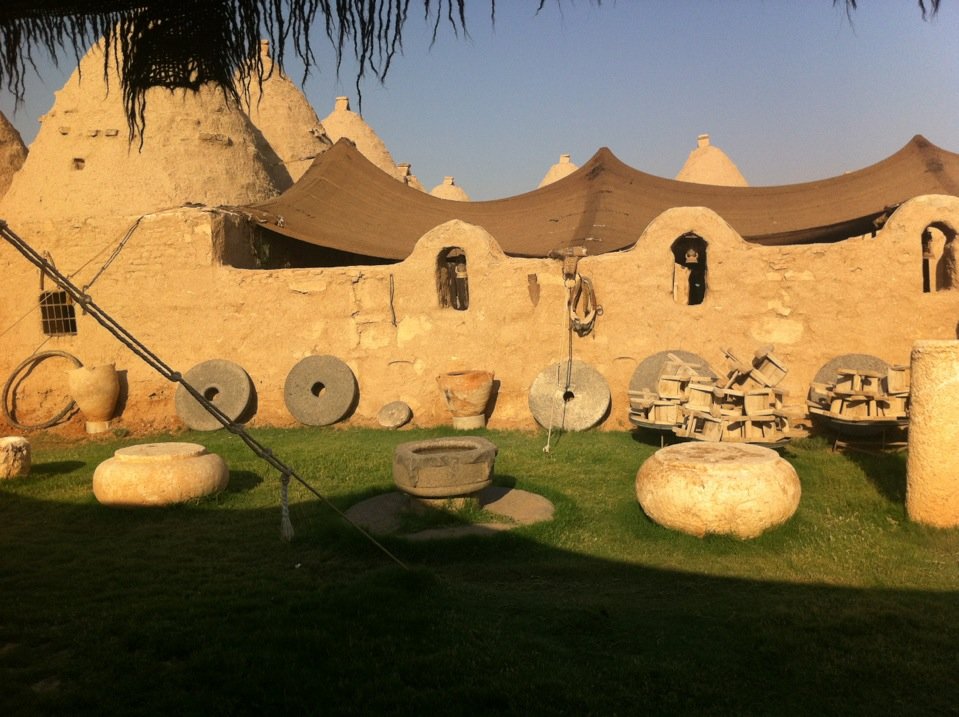 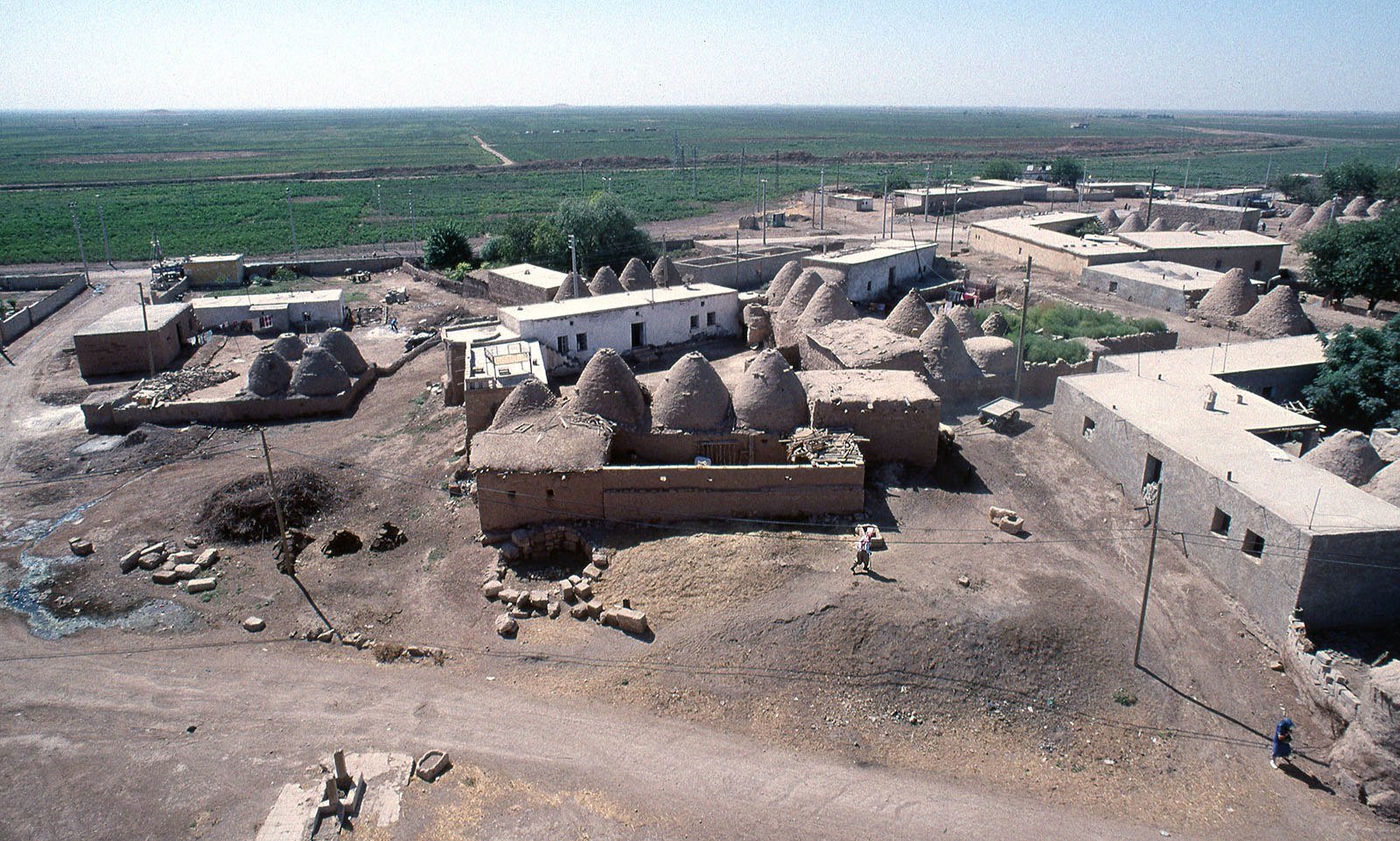 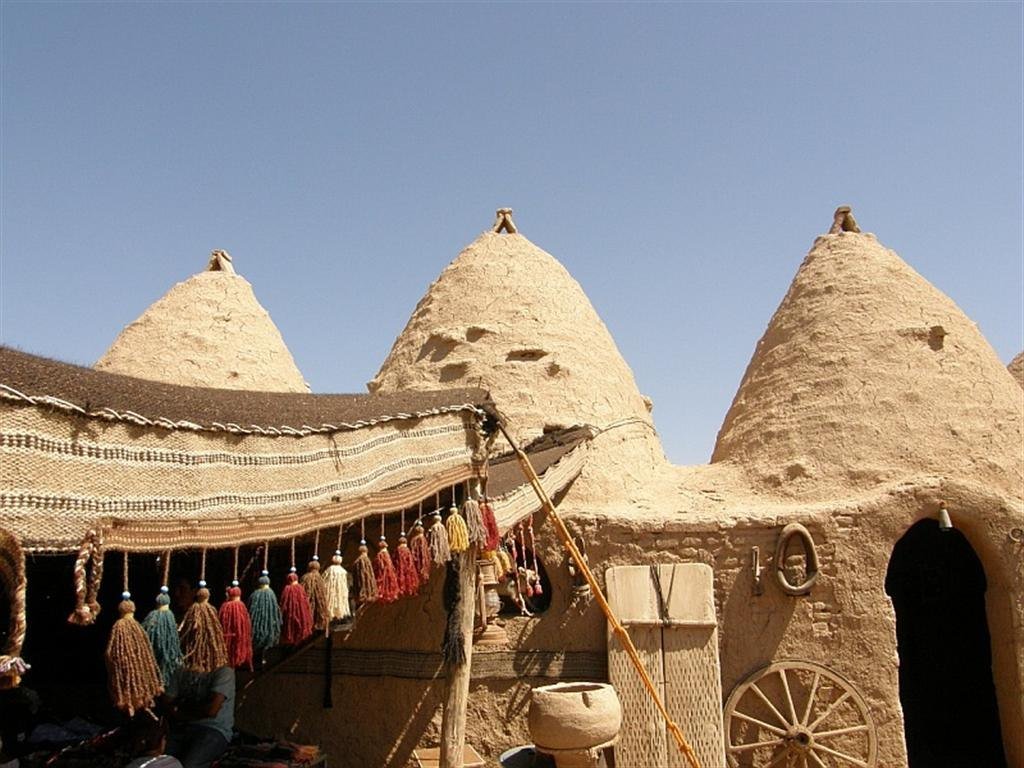 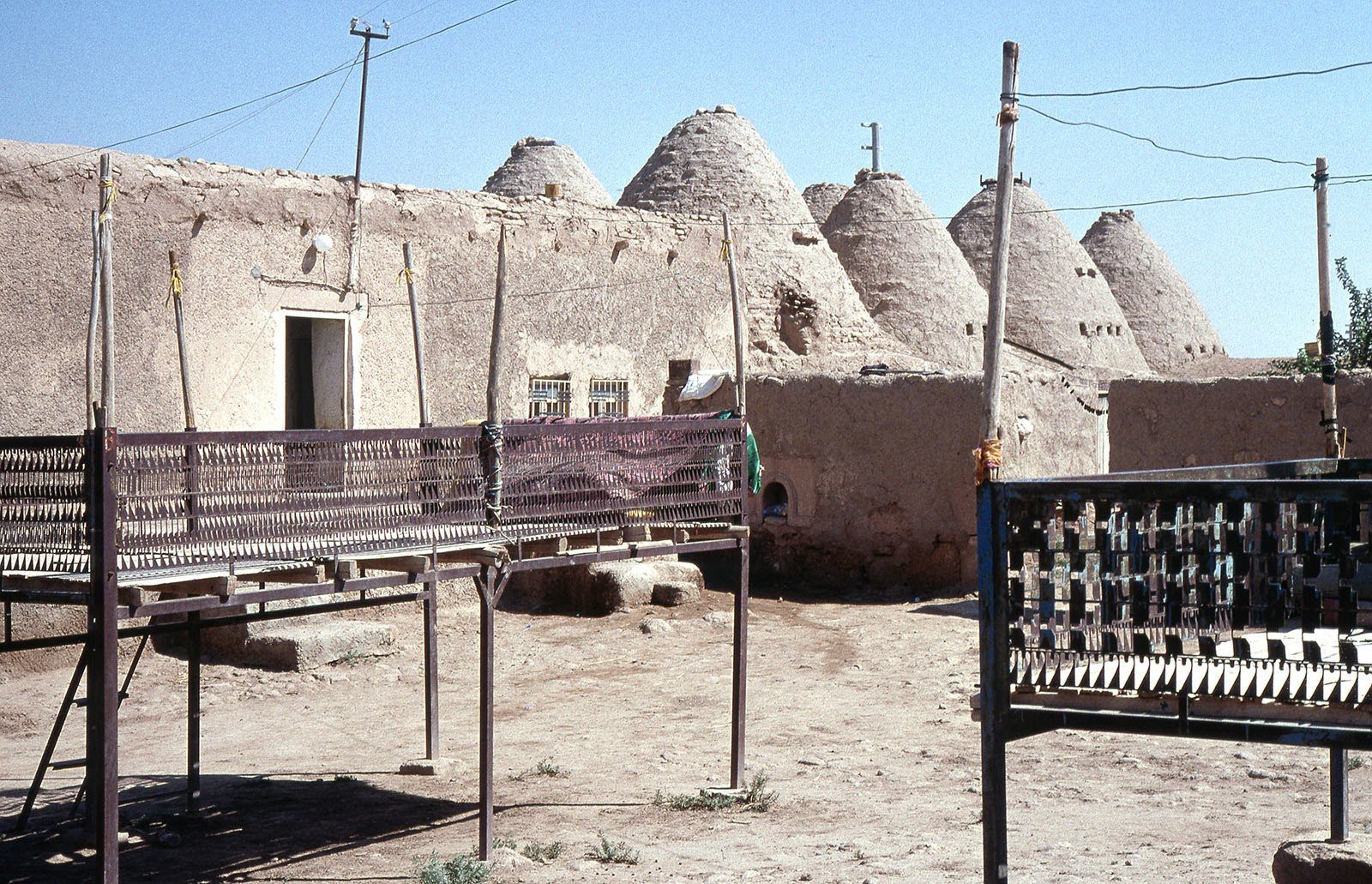 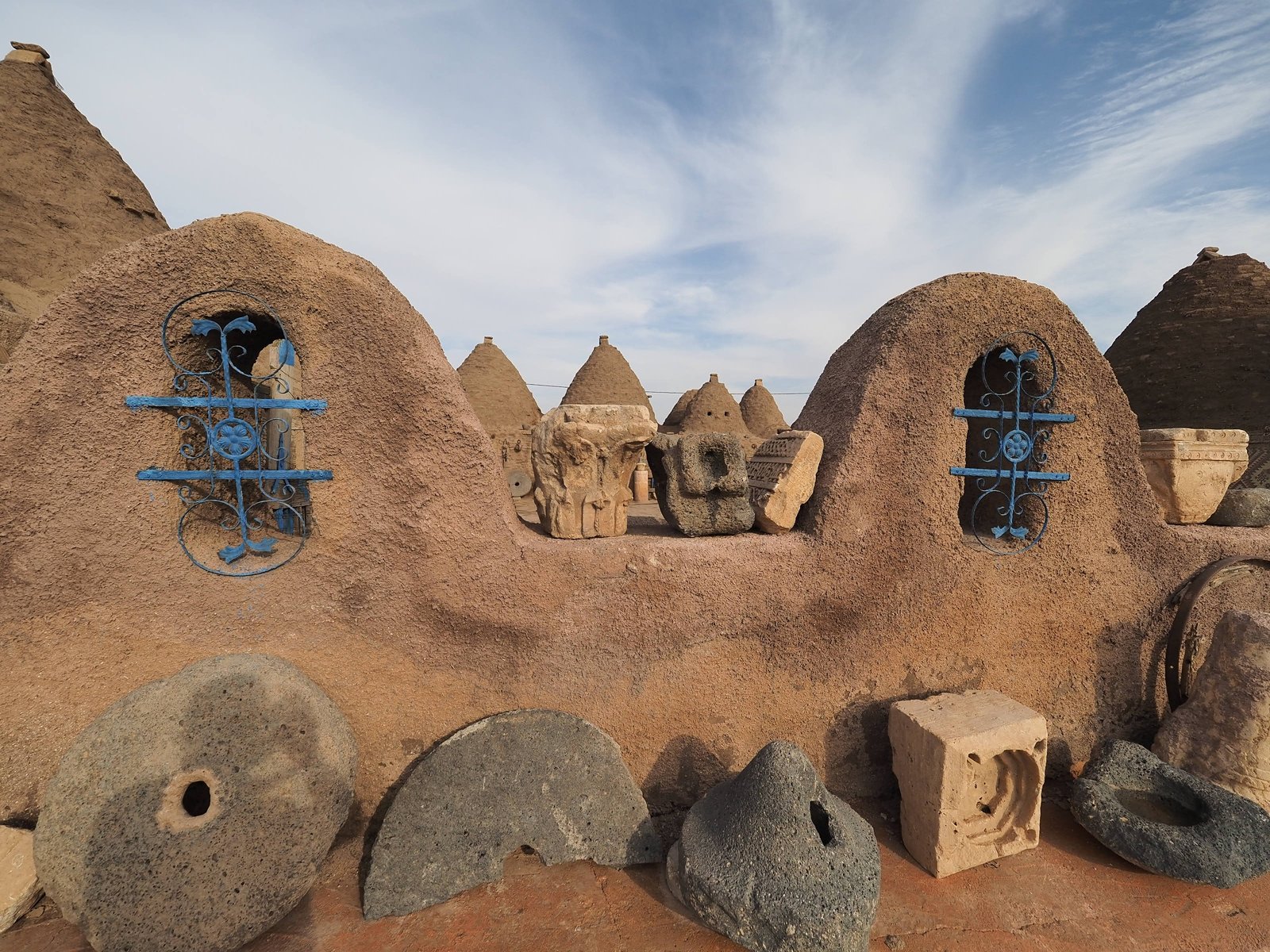 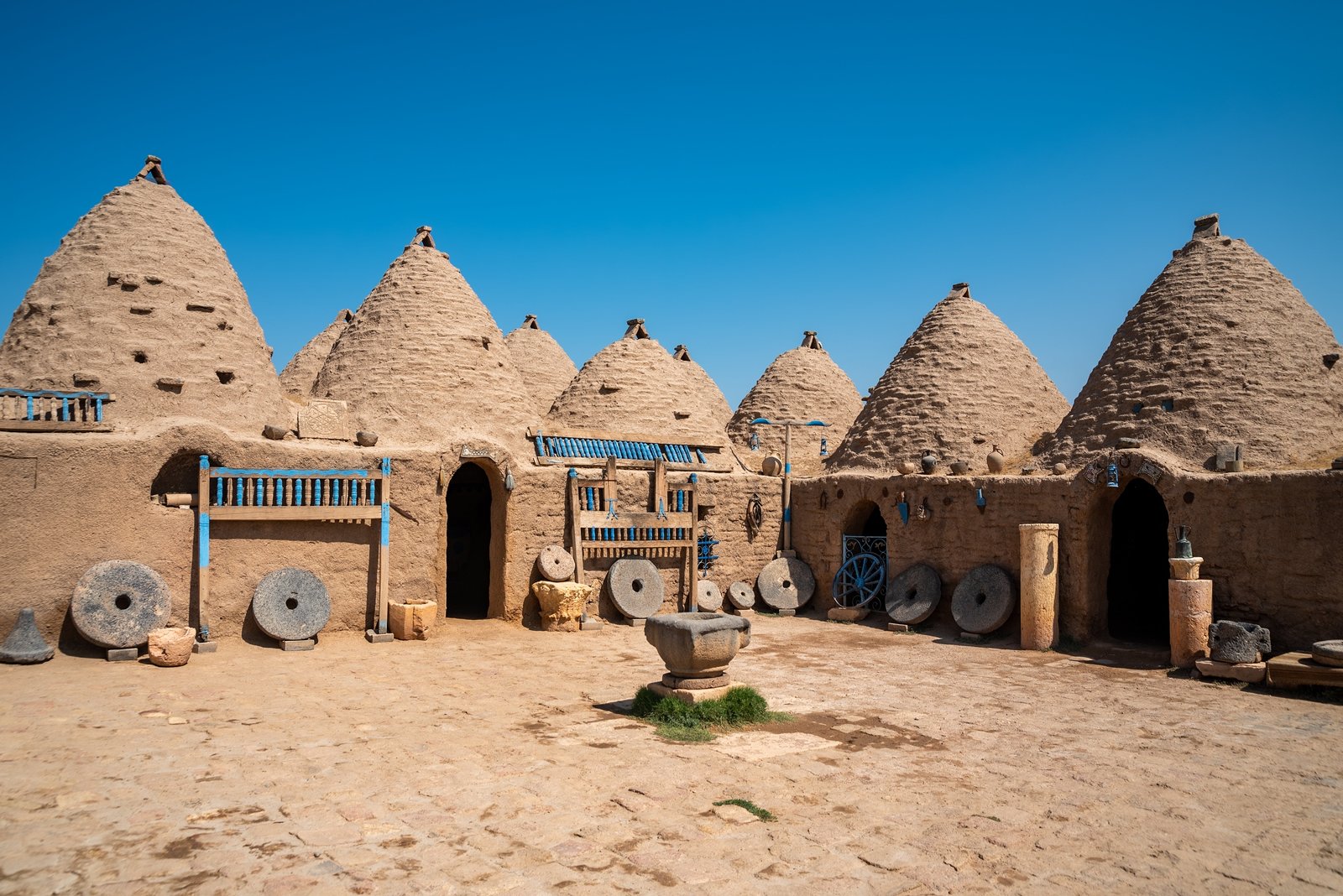 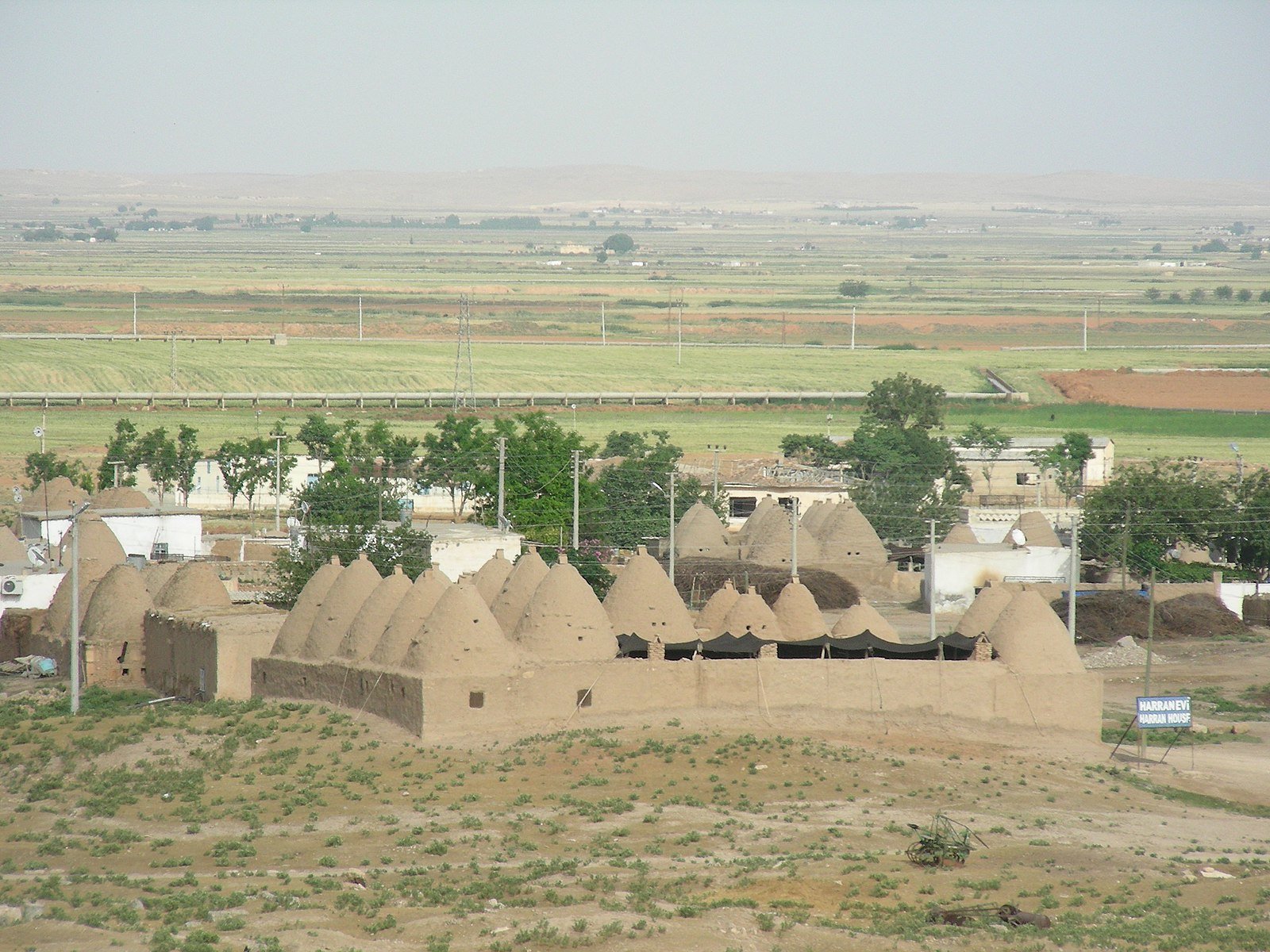 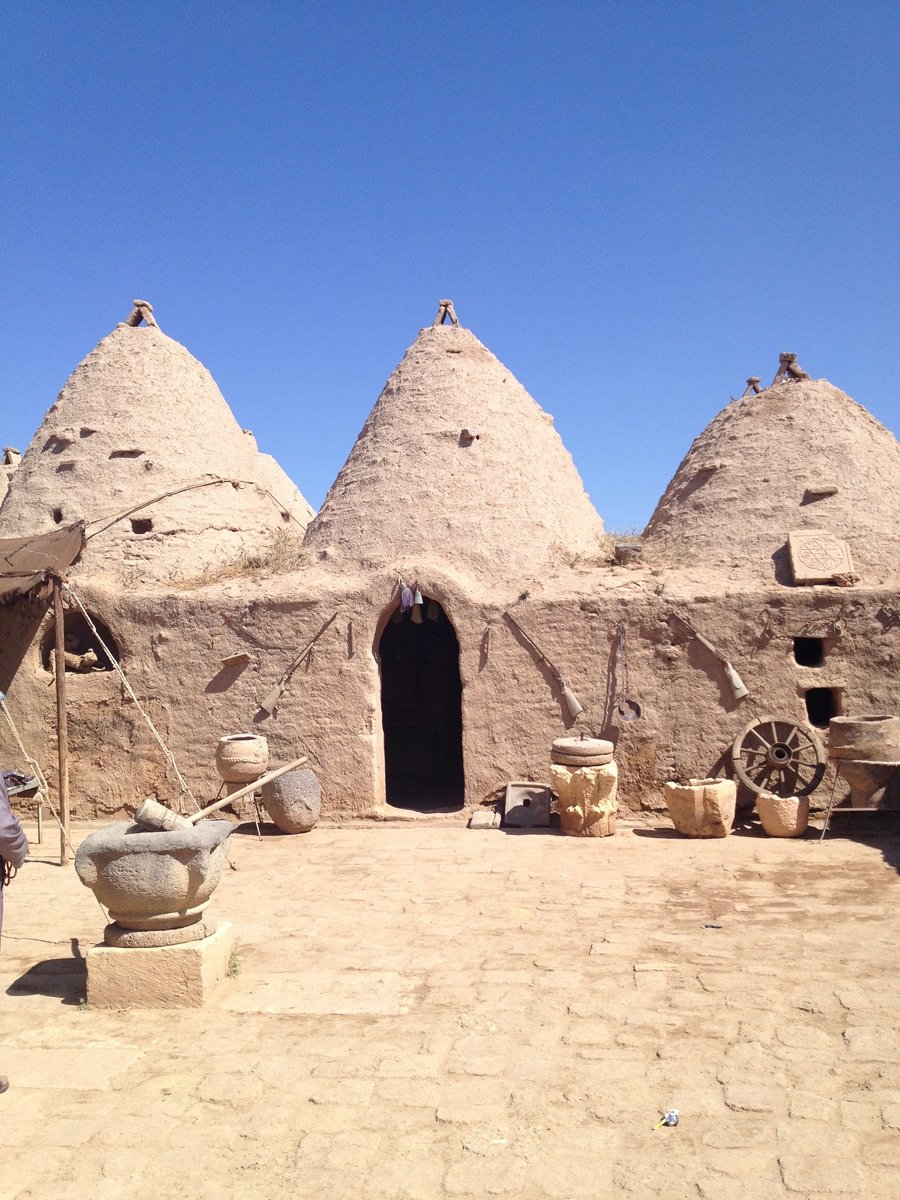 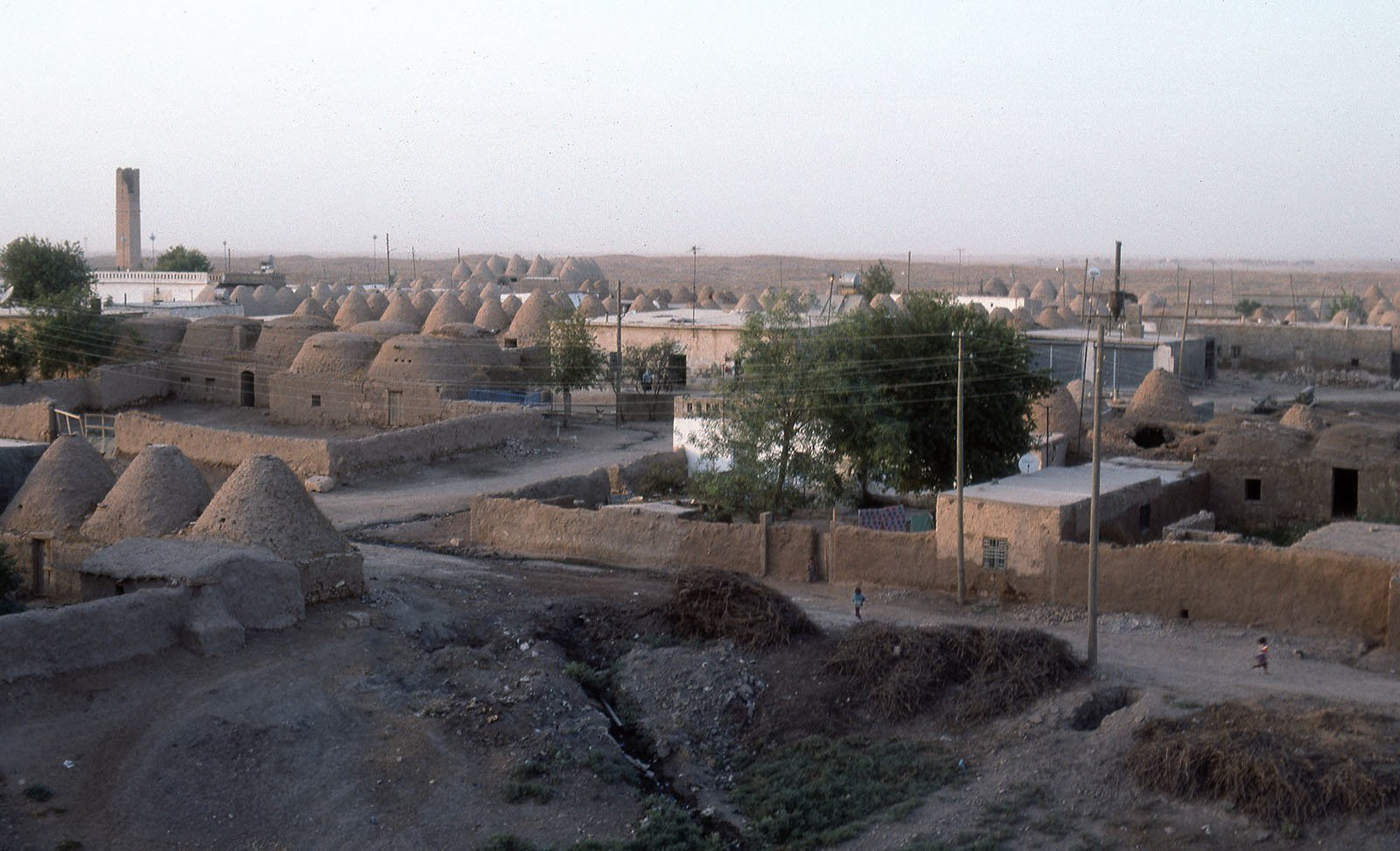 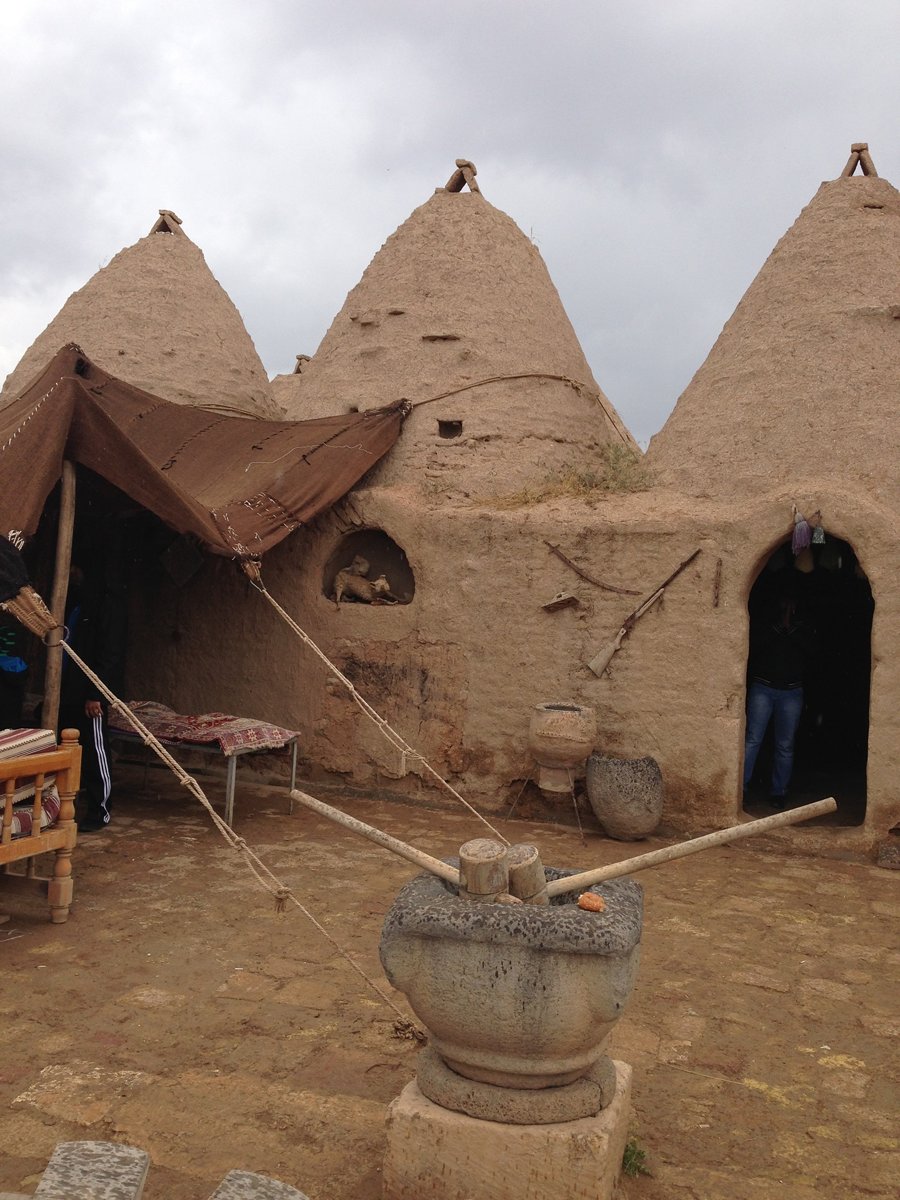 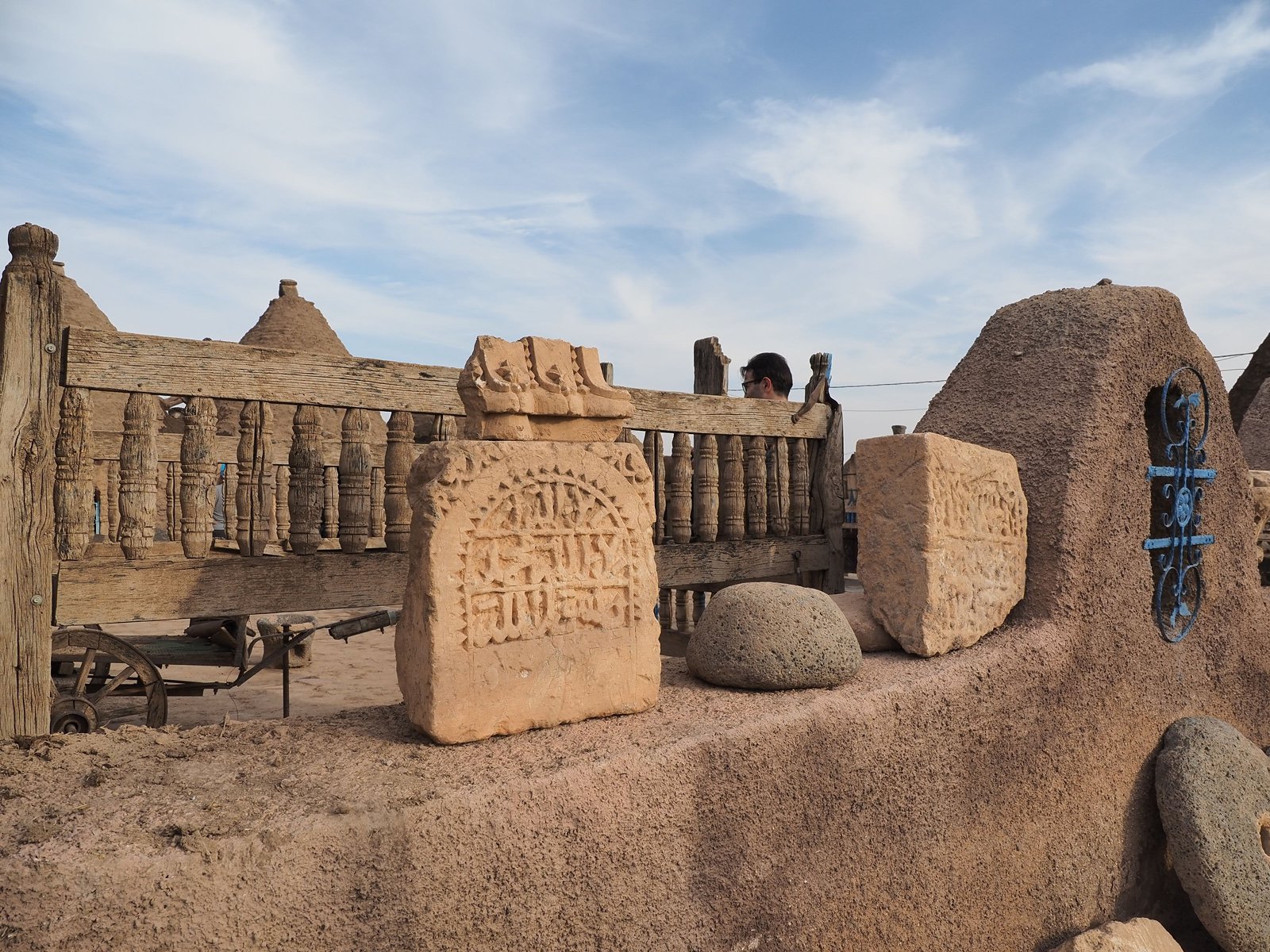 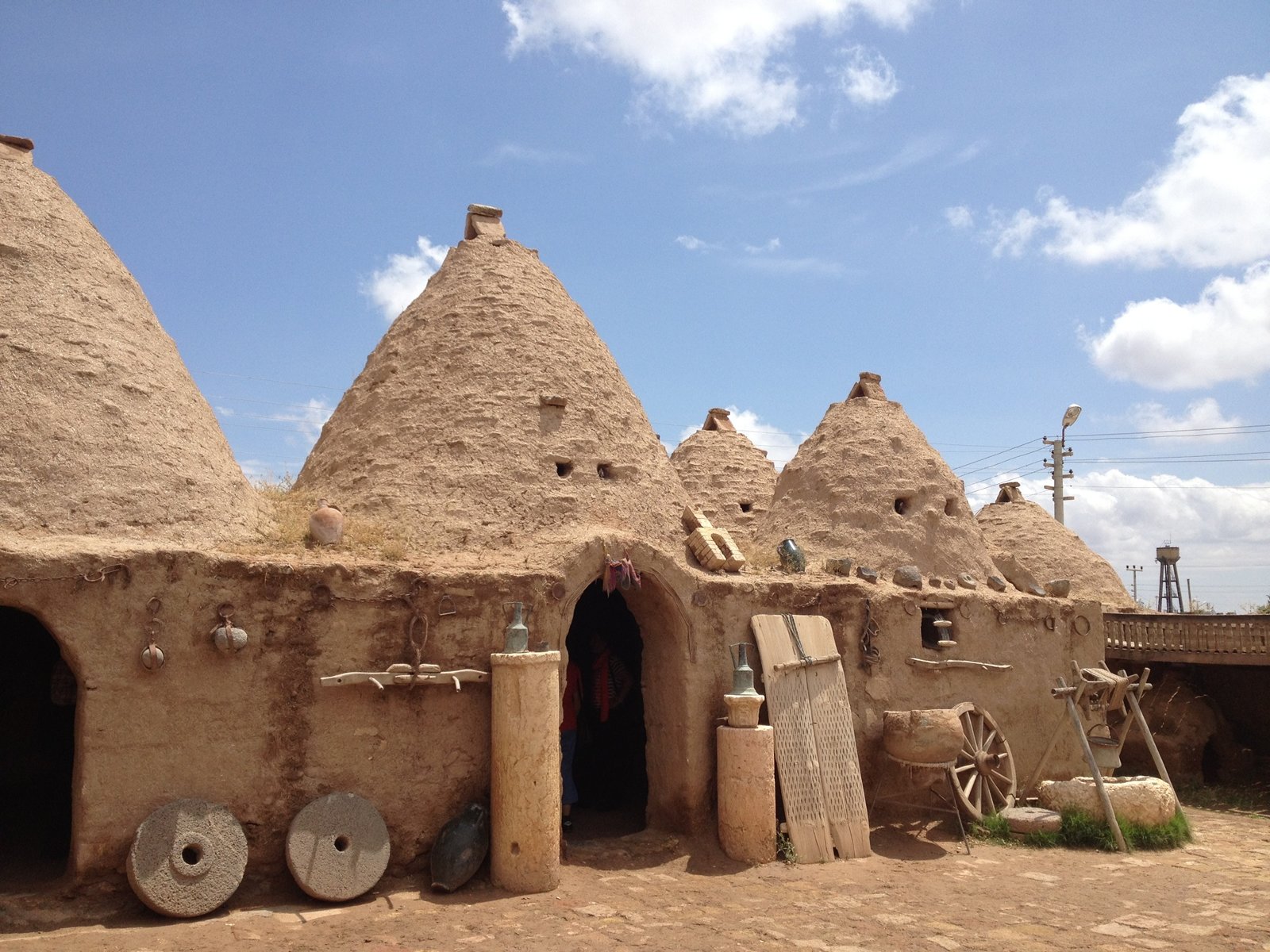 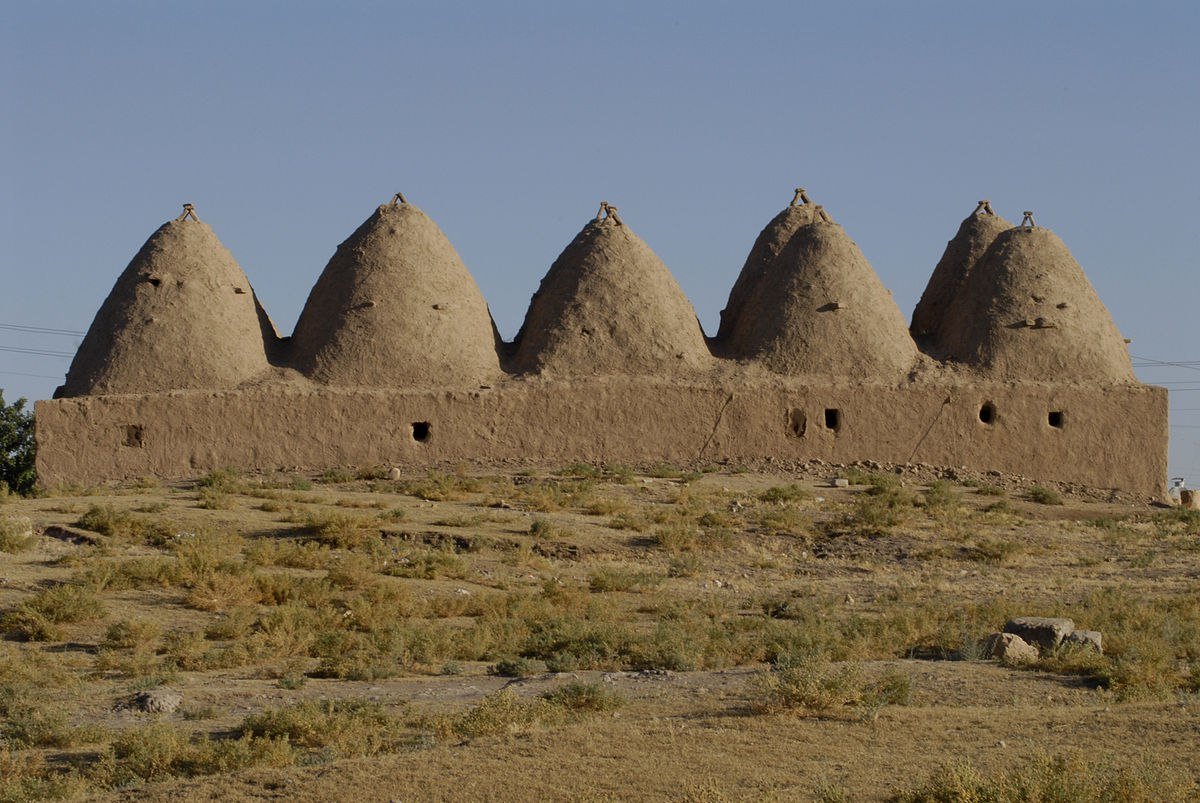 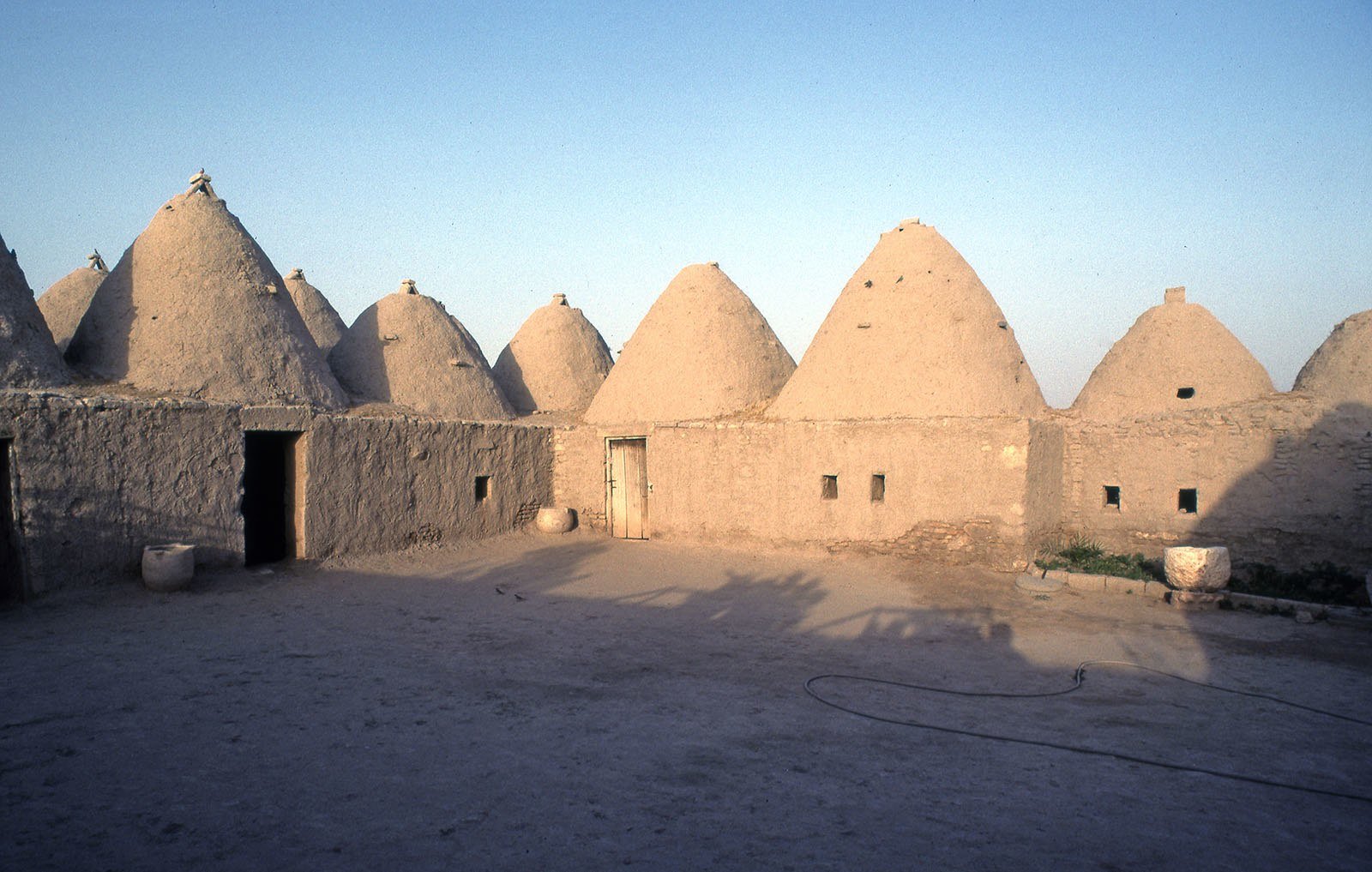