Gesù Nuovo (Italian New Jesus) is the name of a church and a square in Naples, Italy. They are located just outside the western boundary of the historic center of the city. The existence of the square is a consequence of the expansion of the city to the west beginning in the early 1500s under the rule of Spanish viceroy Pedro Alvarez de Toledo. The square is marked by three prominent landmarks:

The Church of Gesù Nuovo

The Church of Gesù Nuovo (New Jesus) was originally a palace built in 1470 for Roberto Sanseverino, Prince of Salerno. The Jesuits had already built a church in Naples, now called Gesú Vecchio. Political intrigues caused the property to be confiscated, and eventually sold in the 1580s to the Jesuits for 45,000 ducats to construct a church (1584 - 1601) under architect Giuseppe Valeriano. When the Jesuits were expelled from Naples in 1767, the church passed to the Franciscan order. The Jesuits returned in 1821. The unusual facade, unusually plain for a Baroque church, is of rusticated ashlar and is the original façade of the palace. The vault frescos representing Biblical and Saintly narratives that exalt the name of Jesus were carried out by Belisario Corenzio and Paolo de Matteis. Also, the church displays behind the facade The Expulsion of Heliodorus from the Temple (1725), a baroque masterpiece by Francesco Solimena. The four pillars are frescoed the four Evangelists, a work by Giovanni Lanfranco. The frescos of the life of the Virgin, placed on the second part of the vault up to the apse by Massimo Stanzione.

Three bronze bas-reliefs arise on a black marble base: on the left, Supper of Emmaus (made by Salvatore Irdi), on the right, The Promise of Eucharist to Cafarnao, and in the middle the reproduction of the Last Supper by Leonardo da Vinci. These last two bas-relieves are works by Gennaro Calì.

Above the altar, with didactic and historical symbols concerning the Eucharistic mystery, are eight busts of Saints, who glorified the Eucharist, overhang from shell-shaped medallions. From the left to the right are medallions of Saints Juliana of Liège, Stanislaus Kostka, Thomas Aquinas, Francis Borgia, Gaetano Thiene, and the blessed Lanfranc of Canterbury. Gennaro Calì carried out four medallions; the third and the fourth bust are by Costantino Labarbera.

The chapel of the visitation and St. Giuseppe Moscati on the right has an altar-piece is by Massimo Stanzione. Under the altar, there is the bronze urn containing the mortal remains of St. Joseph Moscati (1880-1927), a biochemistry teacher at the University of Naples and head physician of the Hospital of the Incurables, canonized on 25 October 1997 by Pope John Paul II. His triple avocations are shown in the triptych sculptured on the urn by Amedeo Garufi.

The left panel represents Professor with his students, the middle the Saint enlightened by the Eucharist, the right one the Doctor, giving comfort to suffering and sick people at the Hospital. In 1990, a bronze statue of the Saint, whose author is Pier Luigi Sopelsa, was placed on the left.

The altar-piece represents Saint Xavier receiving a vision of Virgin Mary, attributed to Giovanni Bernardino Azzolino. On the upper part, three paintings on the wall by Luca Giordano and the vault frescoes by Corenzio and De Matteis represent episodes from the Saint’s life.

The canvas placed in the chapel of St. Francis Borgia (1510-1572) is attributed to Sebastiano Conca.

At the end of the right aisle, there is the Sacred Heart chapel, once dedicated to the Holy Trinity. The frescos on the side walls were carried out by Belisario Corenzio. The picture representing the holy Trinity with Groups of Saints, whose author is Guercino, is now placed on one side of the chapel of St. Ignatius.

The altar-piece represents the Virgin with Child Jesus and 3 Saint Martyrs on the left is attributed to Giovanni Bernardino Azzolino (1560-1610). The second, Nativity chapel, has an altarpiece by Girolamo Imparato.

The chapel dedicated to St. Ignatius of Loyola, Among statues are two of David and Jeremiah by Cosimo Fanzago. On the upper part, two paintings by Ribera portray the story of the Saint. The vault frescos, with episodes from St. Ignatius’s life by De Matteis. The famous composer Carlo Gesualdo, prince of Venosa is buried in front of the St. Ignatius Chapel.

The Crucifix Chapel. The wooden Christ Crucified, with the Blessed Virgin and St. John, was sculpted by Francesco Mollica.

The two imposing side Reliquaries, with 70 busts of saint martyrs in golden wood, were made in the most part in 1617 by the Neapolitan woodcarver Giovan Battista Gallone.

The Sacristy contains frescos by Aniello Falcone. The Lavabo, at the back, is a work in polychrome marbles made by Dionisio Lazzari.

The Church of Santa Chiara

The Church of Santa Chiara is a Gothic church/convent built between 1310 and 1328 for the wife of King Robert of Anjou. It is marked by a belfry that stands within the grounds at the northeast corner. The complex retains the citadel-like walls setting it apart from the outside world, walls that contained a vast religious community—and today contain a more modest one—made up of the Convent of the Poor Clares and an order Grey Friars. The complex was expanded along Baroque lines in the 18th century. It was almost entirely destroyed by bombing in WW II and was restored to its original Gothic form in 1953. The noteworthy monastic courtyard in the rear of the church is the result of a renovation done by Domenico Antonio Vaccaro in the 1730s, for Maria Amalia of Saxony, wife of Charles III of Bourbon, King of Naples. The majolica tilework is characteristic of the school of Neapolitan ceramic from that period and was crafted by Donato Massa and his son, Giuseppe.

The Spire of the Immaculate Virgin

The Spire of the Immaculate Virgin stands at the center of the square. It is the tallest and most ornamental of three such "plague columns" in Naples—that is, built to invoke the Lord's protection from the plague. This one was completed in 1750 after many decades of construction. Some of the finest sculptors of the 18th century worked on the spire, including Francesco Pagani and Matteo Bottiglieri. Depicted on the spire, among other scenes, are the Presentation of Jesus at the Temple; The Birth of the Virgin Mary; and The Annunciation. Its rich ornamentation is considered the epitome of Neapolitan Baroque sculpture.

Salvatore De Carmine
Authentic and historic Naples. There is the church, with its art and the peculiar "diamonds" on its façade; the monument on the middle, captivating in its richness; and Santa Chiara, of course!

Santa Chiara is a religious complex in Naples, southern Italy, that

Piazza Dante is a large public square in Naples, Italy, named for the

San Pietro a Majella is a church in Naples, Italy. The term may also

Add to wishlist
I've been here
Visited
Sant'Angelo a Nilo

Sant'Angelo a Nilo is a church in Naples, Italy. It is well known for 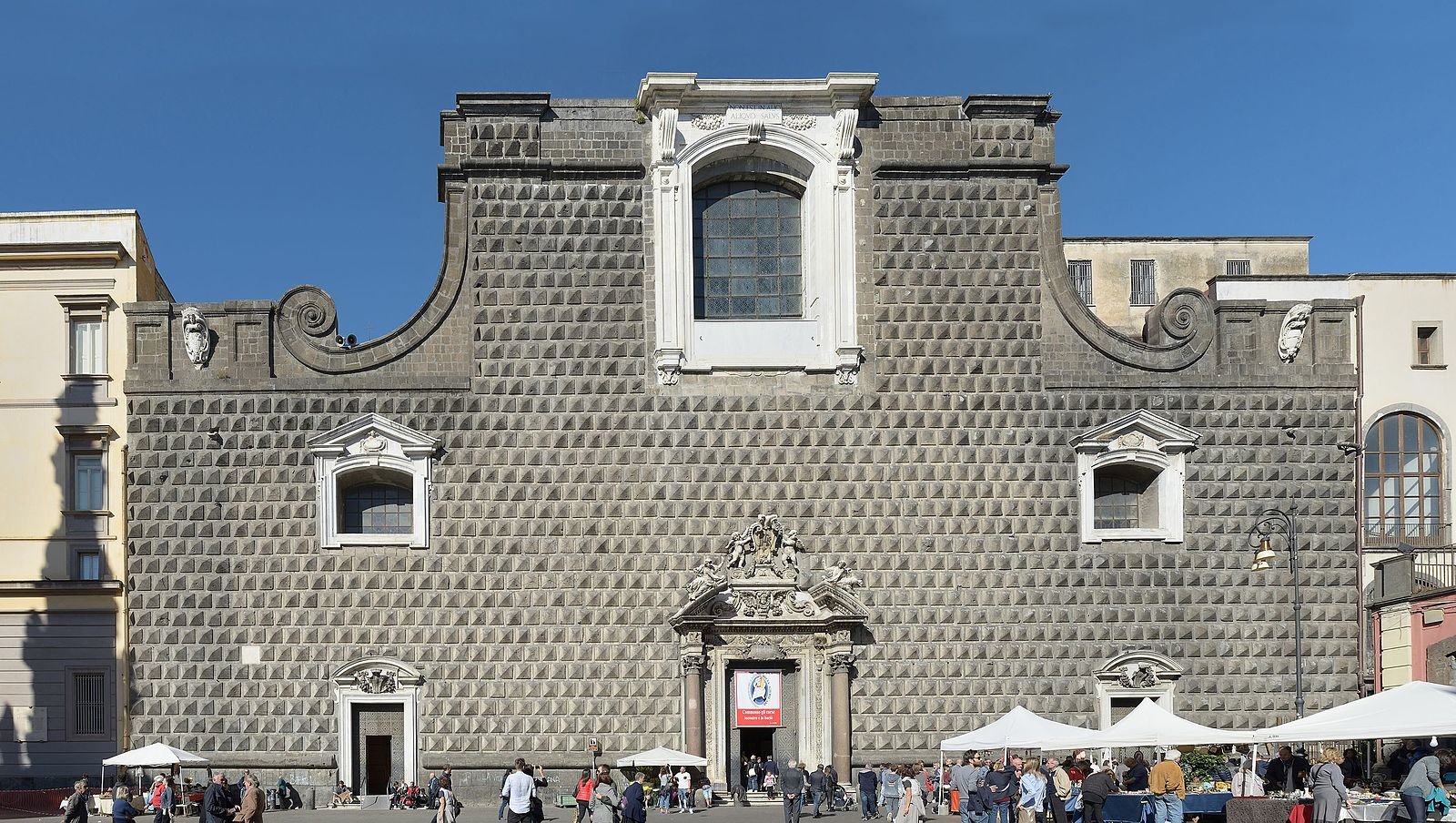 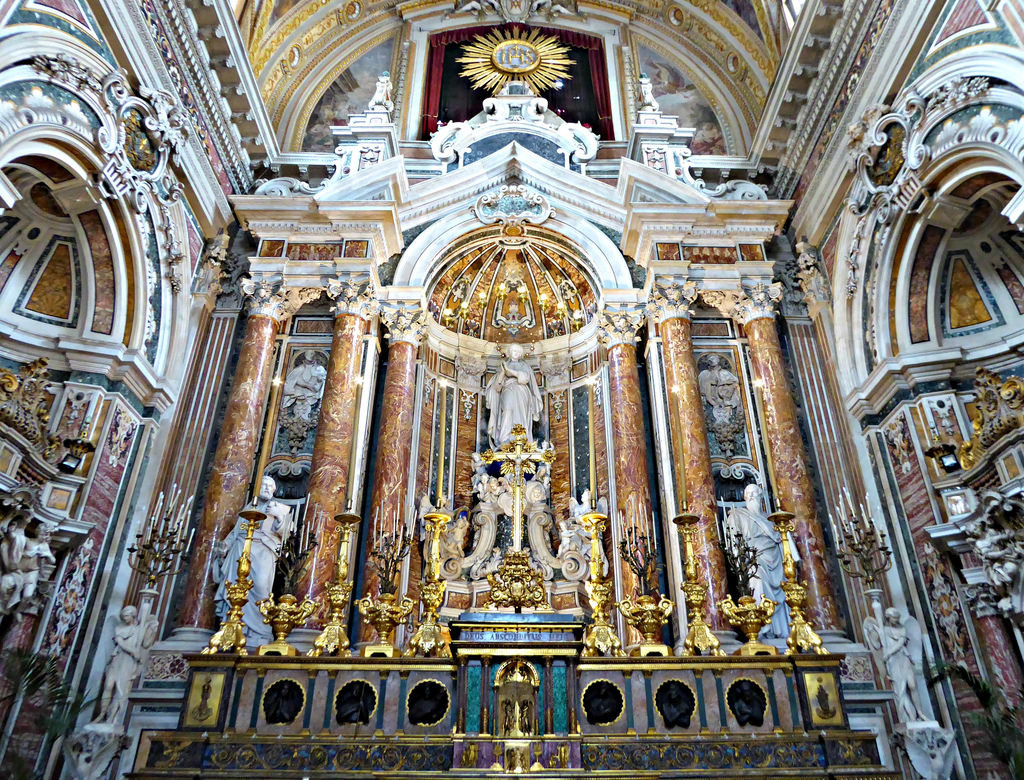 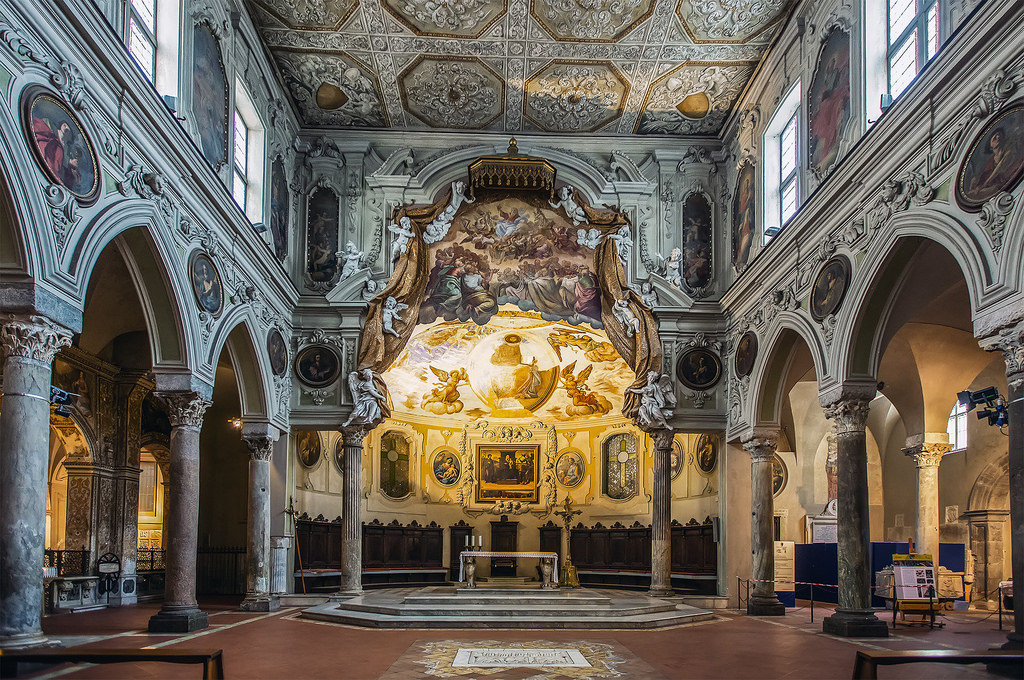 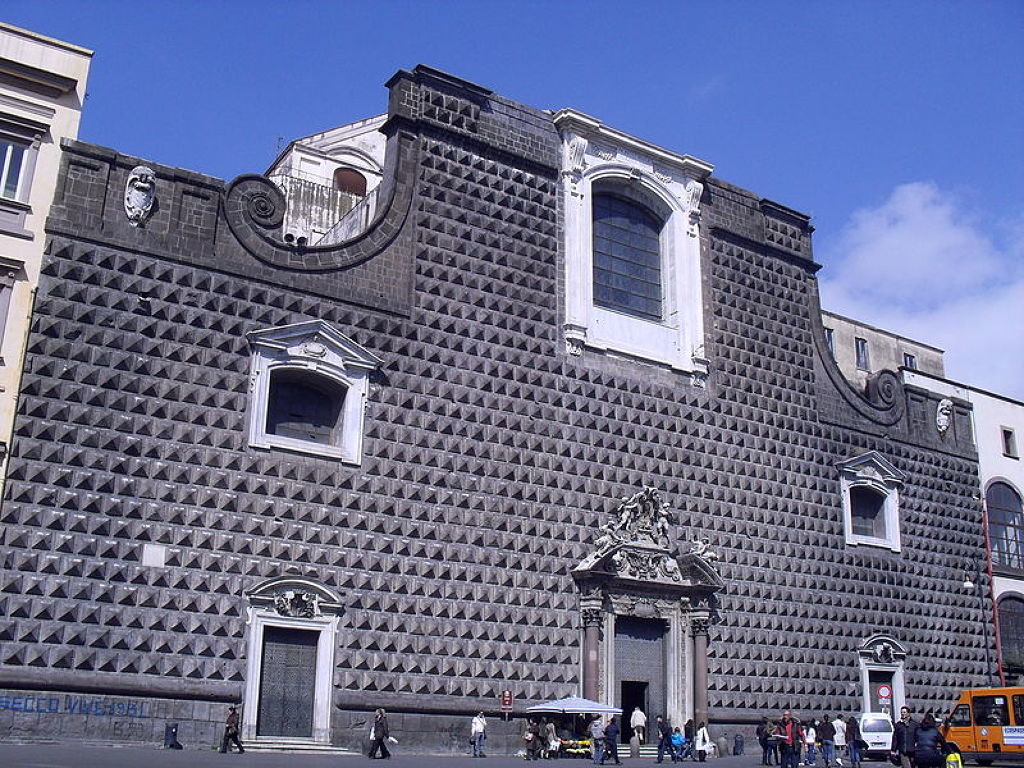 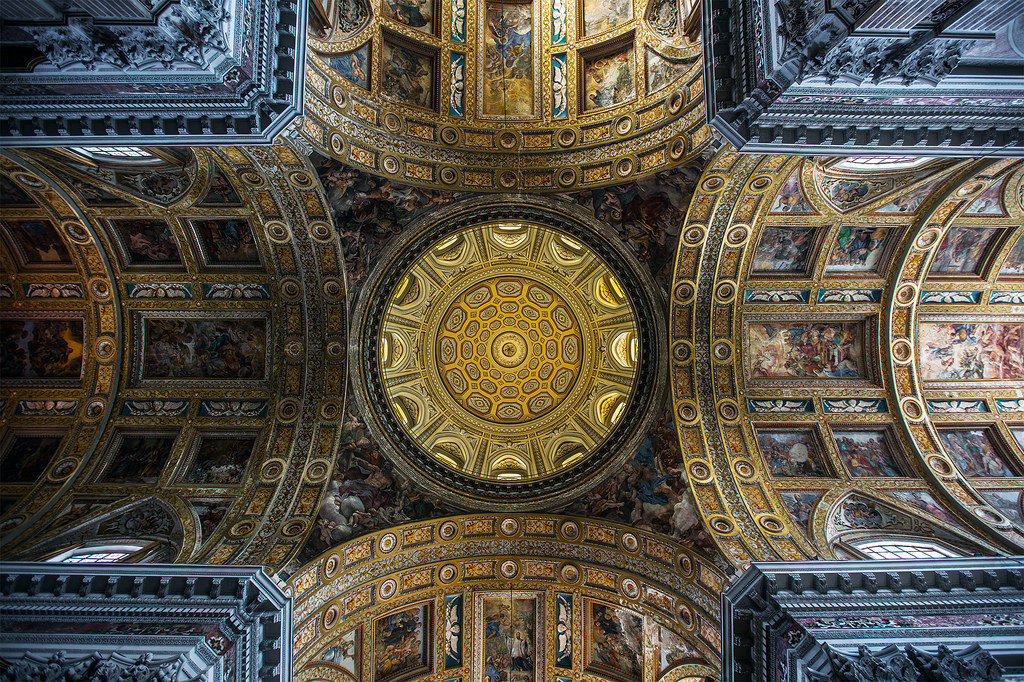