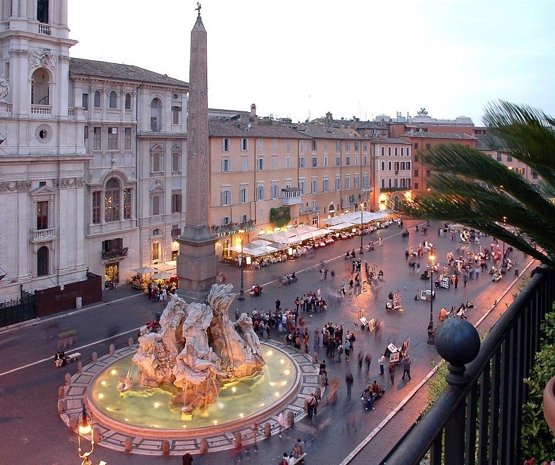 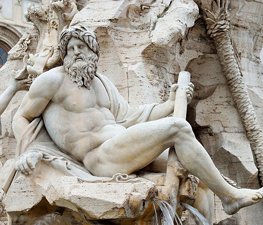 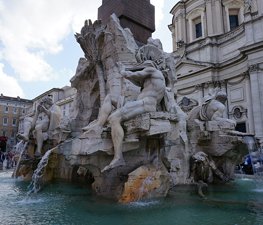 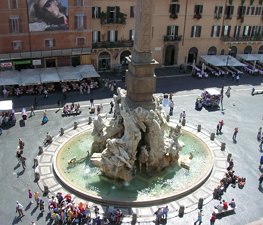 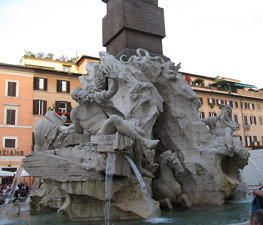 The Fontana dei Quattro Fiumi or "Fountain of the Four Rivers" occupies the center of the large oval Piazza Navona in Rome. It is a masterpiece of Gianlorenzo Bernini's, and emblematic of the dynamic and dramatic effects sought by high Baroque artists. It was erected in 1651 in front of the church of Sant'Agnese in Agone, and yards from the Pamphilj Palace belonging to this fountain's patron, Innocent X (1644-1655).

Bernini's design was selected in competition. The circumstances of his victory are described as follows:

So strong was the sinister influence of the rivals of Bernini on the mind of Innocent X that when he planned to set up in Piazza Navona the great obelisk brought to Rome by the Emperor Caracalla which had been buried for a long time at Capo di Bove for the adornment of a magnificent fountain, the Pope had designs made by the leading architects of Rome without an order for one to Bernini. Prince Niccolò Ludovisi, whose wife was niece to the pope, persuaded Bernini to prepare a model, and arrange for it to be secretly installed in a room in the Palazzo Pamphilj which the Pope had to pass. When the meal was finished, seeing such a noble creation, he stopped almost in ecstasy. Being prince of the keenest judgment and the loftiest ideas, after admiring it, said: “This is a trick … It will be necessary to employ Bernini in spite of those who do not wish it, for he who desires not to use Bernini’s designs, must take care not to see them.” Paraphrase from Filippo Baldinucci, The life of Cavaliere Bernini (1682)

Public fountains in Rome served multiple purposes: first, they were highly needed sources of water for neighbors in the centuries prior to home plumbing. Second, they were monuments to the papal patrons. Earlier Bernini fountains had been the Fountain of the Triton in Piazza Barberini, the fountain of the Moor in the southern end of Piazza Navona erected during the Barberini papacy, and the Neptune and Triton for Villa Montalto, whose statuary now resides at Victoria and Albert Museum in London.

This fountain means to depict allegories for the four great rivers in the four continents recognized by the Renaissance geographers: the Nile in Africa, Ganges in Asia, Danube in Europe, and Río de la Plata in America. Each has animals and plants that further carry forth the identification. Each has a river god, semi-prostrate, in awe of the central tower, epitomized by the slender Egyptian obelisk (built for the Roman Serapeum in AD 81), symbolizing by Papal power surmounted by the Pamphilij symbol (dove). In addition, the fountain is a theater in the round, a spectacle of action, that can be strolled around. Water flows and splashes from a jagged and pierced mountainous disorder of travertine marble. A legend, common with tour-guides, is that Bernini positioned the cowering Rio de la Plata River as if the sculpture was fearing the facade of the church of Sant'Agnese by his rival Borromini could crumble against him; in fact, the fountain was completed several years before Borromini began work on the church.

The dynamic fusion of architecture and sculpture made this fountain revolutionary when compared to prior Roman projects, such as the stilted designs Acqua Felice and Paola by Fontana in Piazza San Bernardo (1585-87) or the customary embellished geometric floral-shaped basin below a jet of water such as the Fontanina in Piazza Campitelli (1589) by Giacomo della Porta.

.]] The Fontana dei Quattro Fiumi was unveiled to the populace of Rome on 12 June 1651. According to a report from the time , an event was organised to draw people to the Piazza Navona. Beforehand, wooden scaffolding, overlaid with curtains, had hidden the fountain, though probably not the obelisk. People would obviously have had an idea of something being built, but the precise details were unknown. Once unveiled, the full majesty of the fountain would be apparent, and this celebrations was designed to advertise this. The festival was paid for by the Pamphilj family, more specifically Innocent X, who had sponsored the erection of the fountain. The most conspicuous item on the Pamphili crest, an olive branch, were brandished by the performers who took part in the event.

The author of the report, Antonio Bernal, takes his readers through the hours leading up to the unveiling. The celebrations were announced by a woman, dressed as the allegorical character of Fame, being paraded around the streets of Rome on a carriage or float. She was sumptuously dressed, with wings attached to her back, and a long trumpet in her hand. Bernal notes that "she went gracefully through all the streets and all the districts that are found among the seven hills of Rome, often blowing the round bronze [the trumpet], and urging everyone to make their way to that famous Piazza." A second carriage followed her; this time another woman was dressed as the allegorical figure of Curiosity. According to the report, she continued exhorting the people to go towards the piazza. Bernal describes the clamour and noise of the people as they discussed the upcoming event.

The report is actually less detailed about the process of publicly unveiling the fountain. However, it does give ample descriptions of the responses of the spectators who had gathered in the Piazza. Once there, Bernal notes, the citizens of the city were overwhelmed by the massive fountain, with its huge life-like figures. The report mentions the "enraptured souls" of the population, the fountain, which "gushes out a wealth of silvery treasures" causing "no little wonder" in the onlookers. Bernal then continues to describe the fountain, making continual reference to the seeming naturalism of the figures and astonishing effect this had on those in the piazza.

The making of the fountain was met by opposition by the people of Rome for several reasons. First, Innocent X had the fountain built at public expense during the intense famine of 1646-48. Throughout the construction of the fountain the city murmurred and talk of riot was in the air. Pasquinade writers protested the construction of the fountain in September 1648 by attaching hand-written invectives on the stone blocks used to make the obelisk. These pasquinades read, "We do not want Obelisks and Fountains, It is bread that we want. Bread, Bread, Bread!" Innocent quickly had the authors arrested and disguised spies patrol the Pasquino statue and Piazza Navona. See the diary of Giacinto Gigli, Diario di Rome, vol. II, pp. 533-34.

The streetvendors of the market also oppsoed the construction of the fountain as Innocent X expelled them from the piazza. The Pamphilij pope believed they detracted from the magnificence of the square. The vendors refused to move and the papal police had to chase them from the piazza. Roman Jews particularly lamented the closing of the Navona since they were allowed to sell used articles of clothing there at the Wednesday market. See Francesco Cancellieri, Il Mercato, il Lago dell'Acqua Vergine, ed il Palazzo Panfiliano nel circo agonale, detto volgarmente Piazza Navona.

Dave Sawyer
This is a Bernini masterpiece — and easily the best fountain in Rome if not for that Trevi guy, chalk full of people just a short walk to the east.

Dasha Komisaruk
I visited this place in the evening. It was breathtaking-night sky, lights everywhere and spectacular view. Probably one of my favorite places in Rome

Emily
Absolutely stunning.. It is also very energetic in the night and the water is lit up and glowing very beautiful less heat fewer people.

Thorsten Sterk
The Fountain of the four Rivers was commissioned by Pope Innocent X. and built by Gian Lorenzo Bernini in the years 1648-1651. It is considered a masterpiece of high baroque sculpture.

I Pini di Roma
Designed in 1651 by Bernini for Innocent X. It represents four major rivers of the four continents through which papal authority had spread: the Nile, the Danube, the Ganges and the Río de la Plata

Fountain of the Four Rivers on Foursquare

Palazzo Madama is a palace in Rome, currently house of the Senate of

San Luigi dei Francesi is a church in Rome, not far from Piazza

Pasquinade refers to an anonymous lampoon, whether in verse or in

Sant'Agostino is a church in Rome, not far from Piazza Navona. It is

Dubai Fountain is the center piece of the Downtown Burj Dubai, located 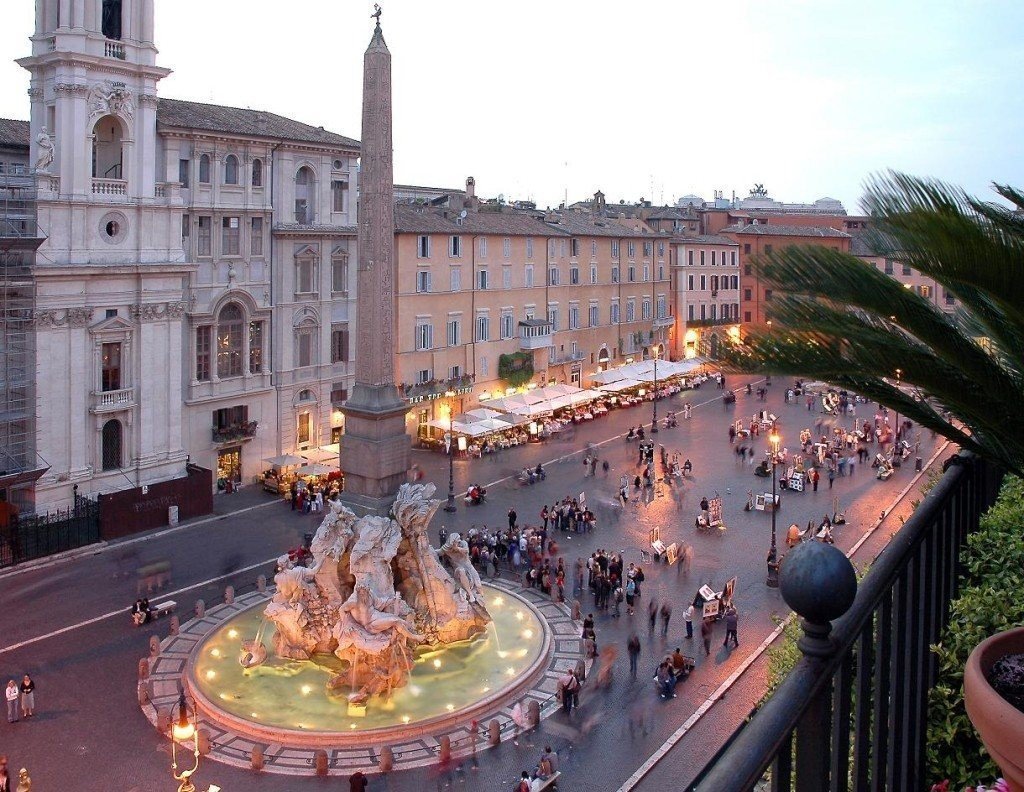 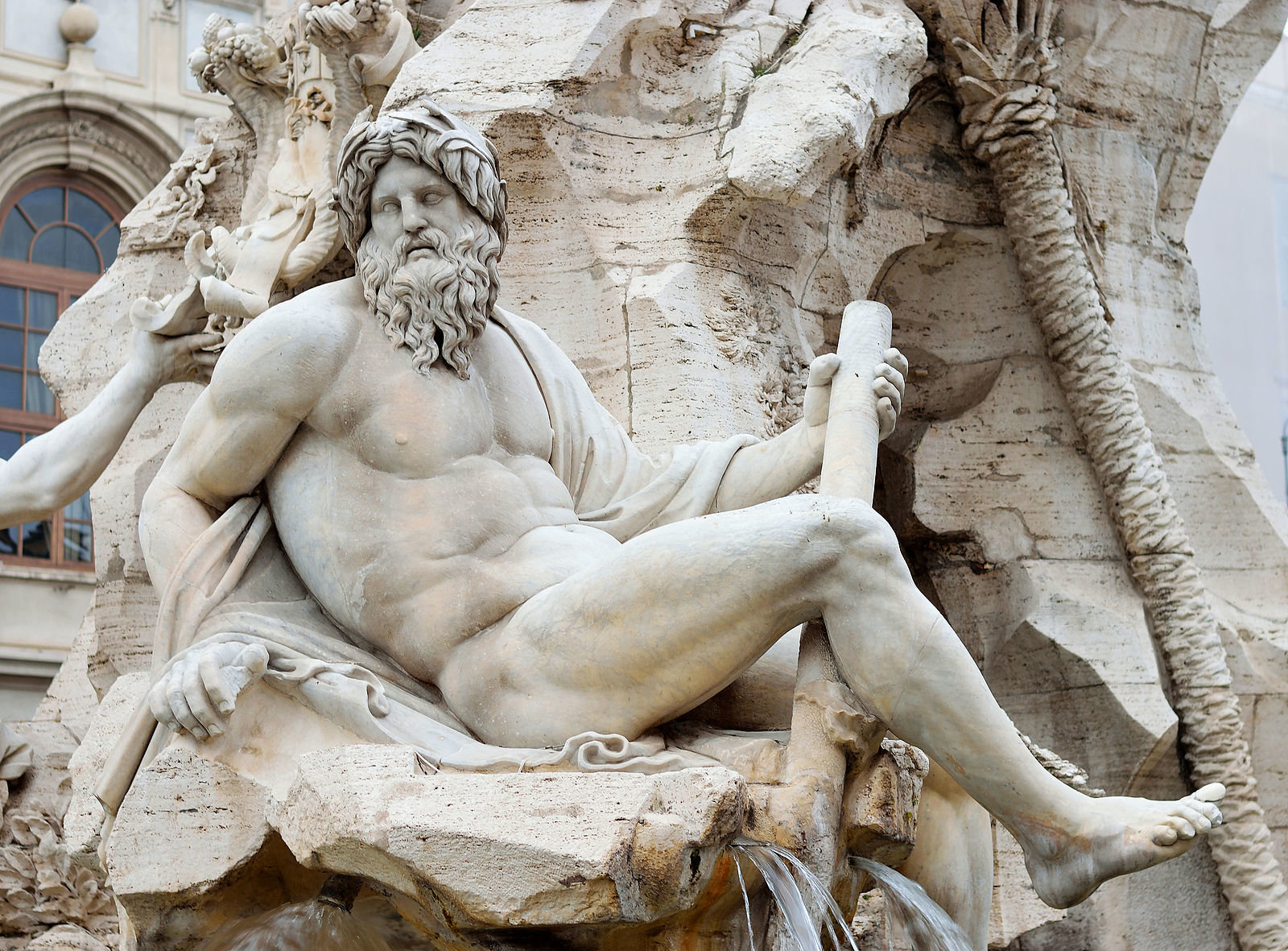 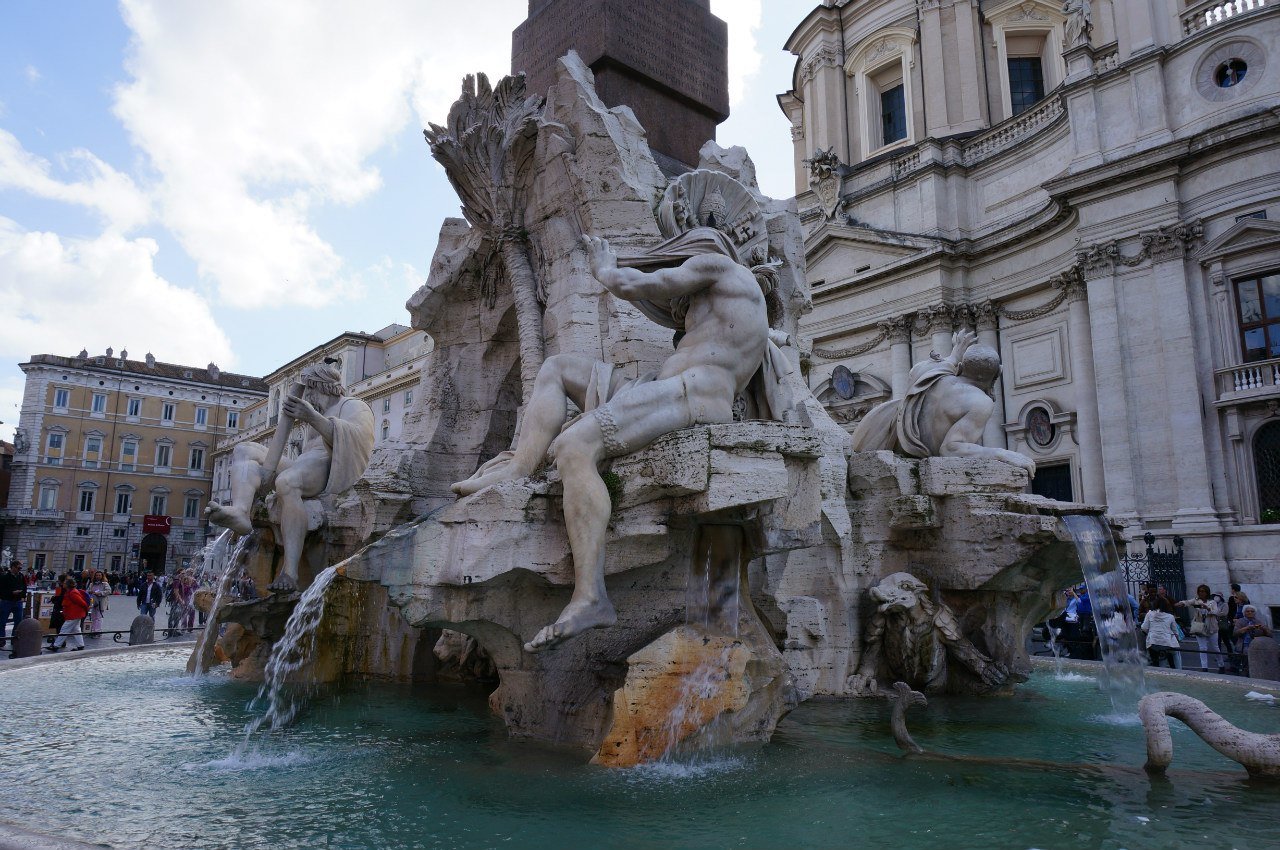 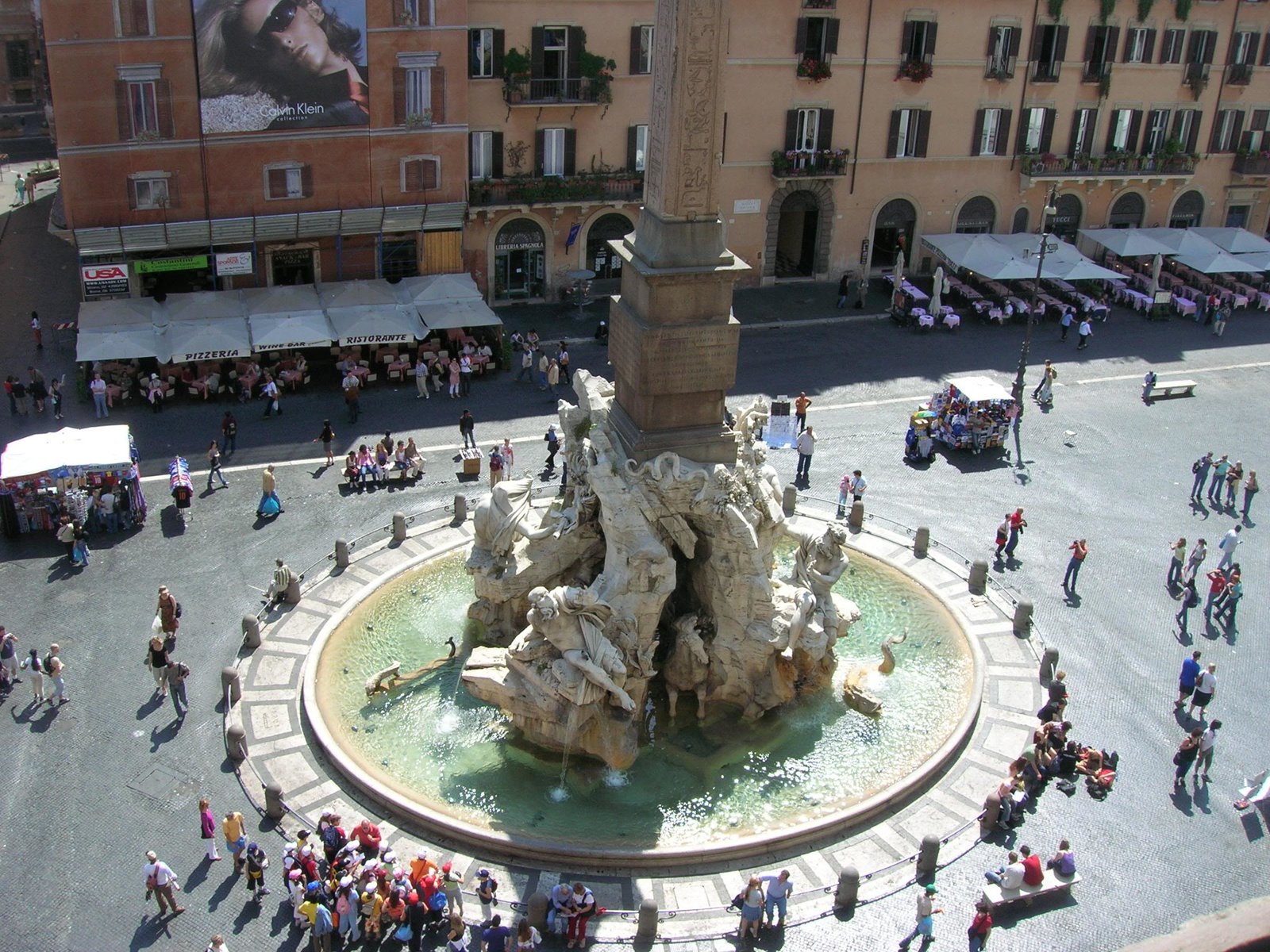 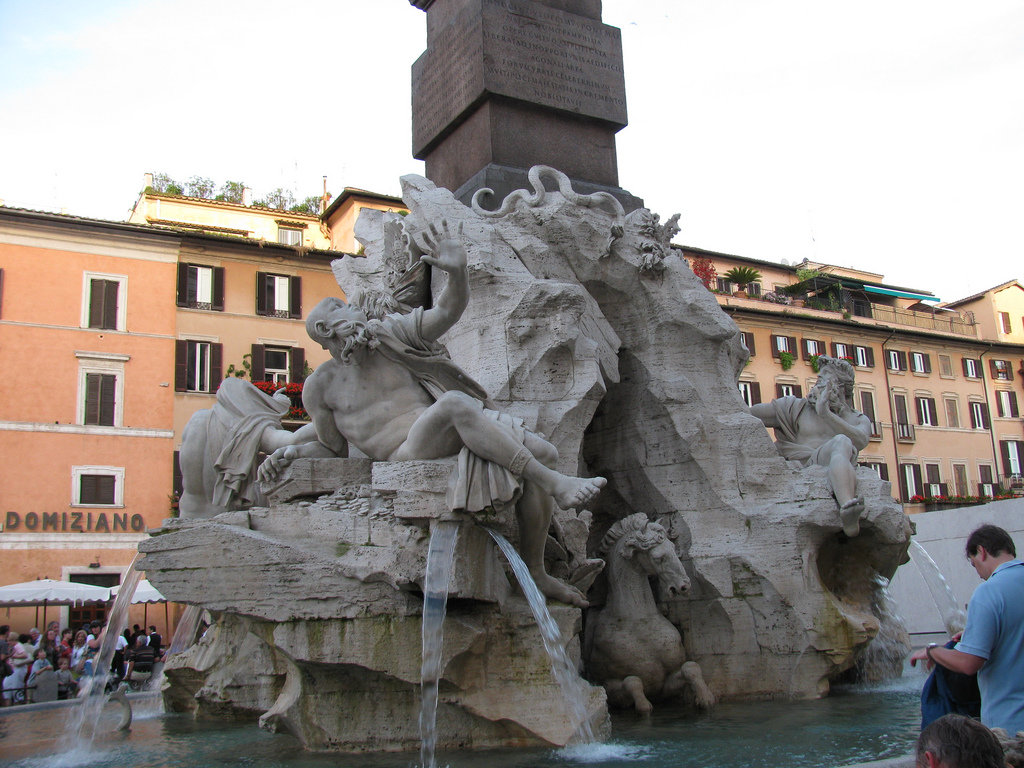 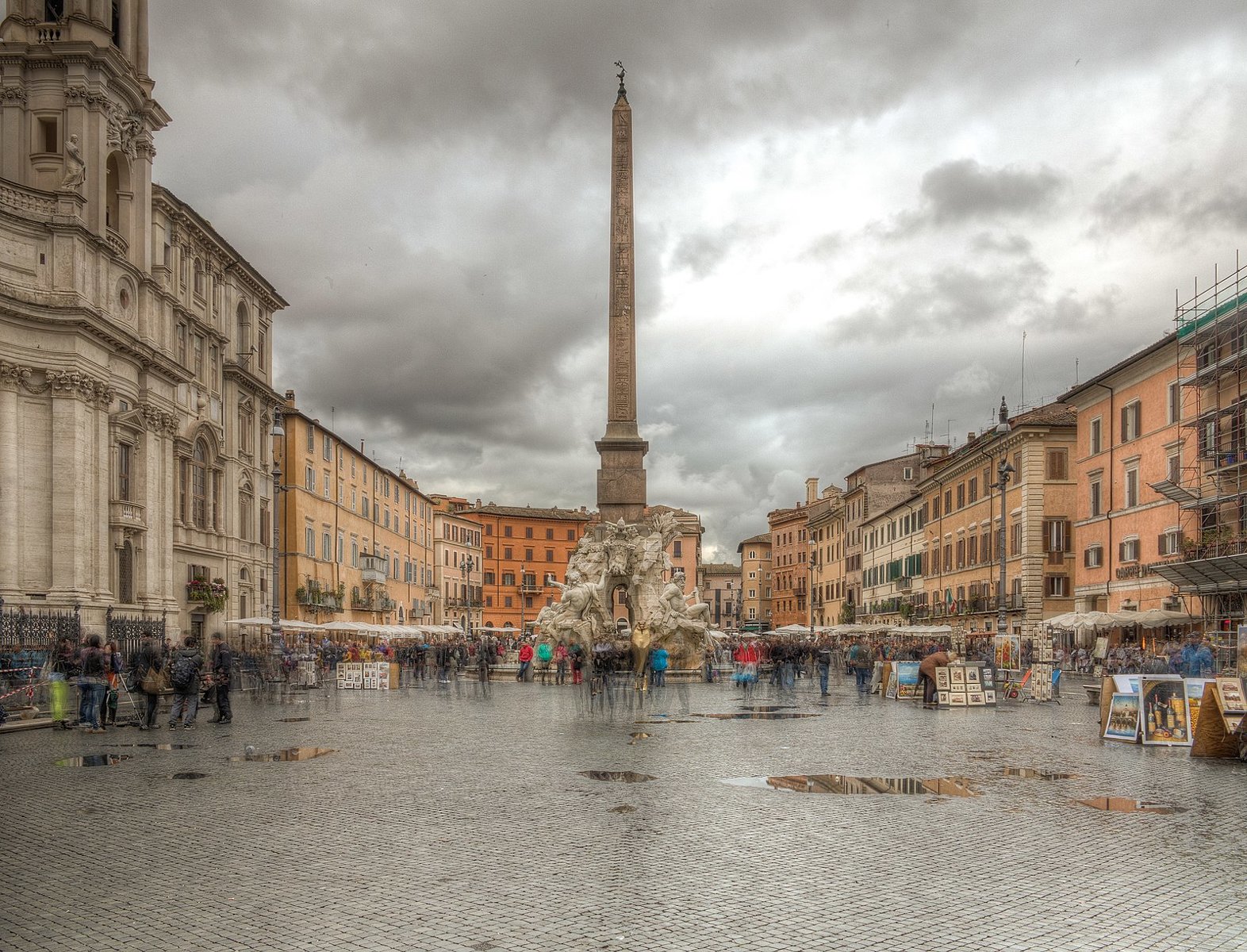 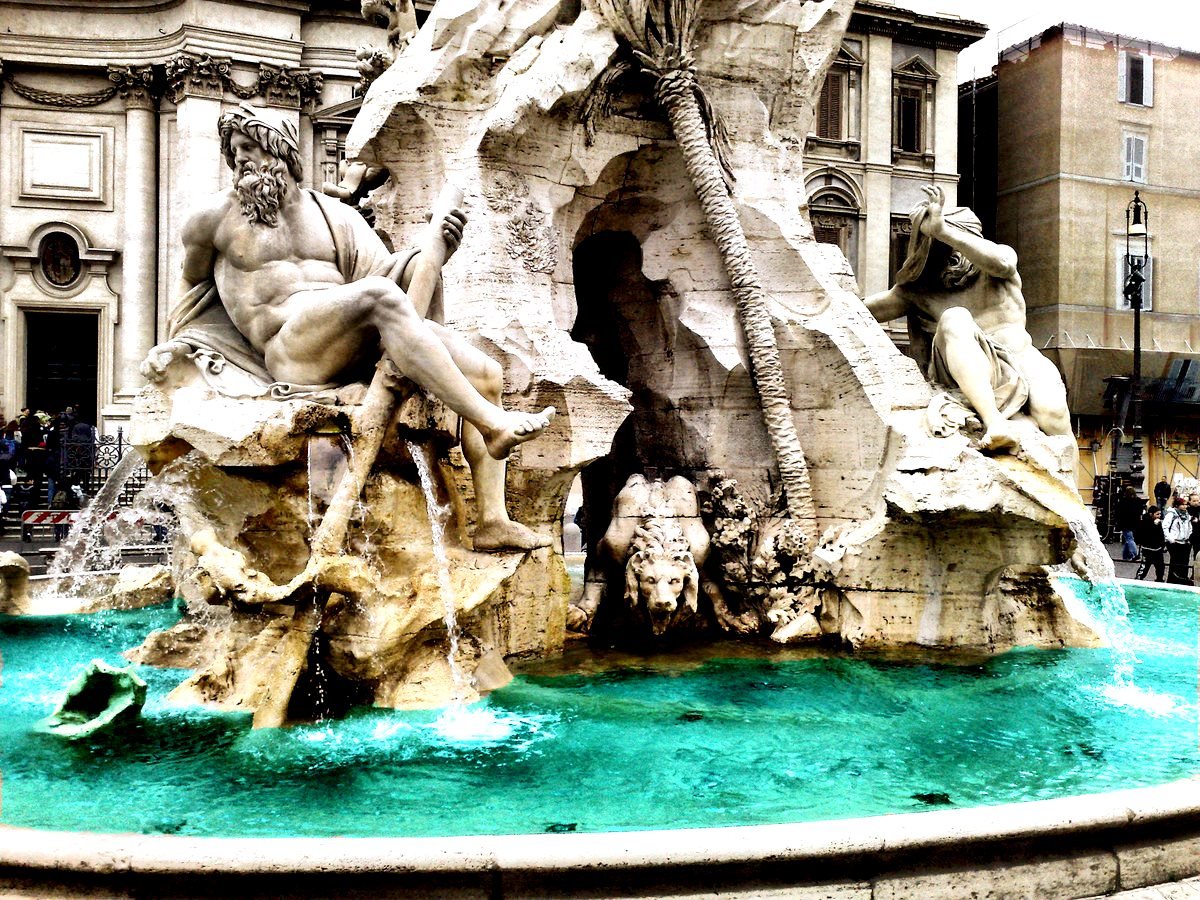 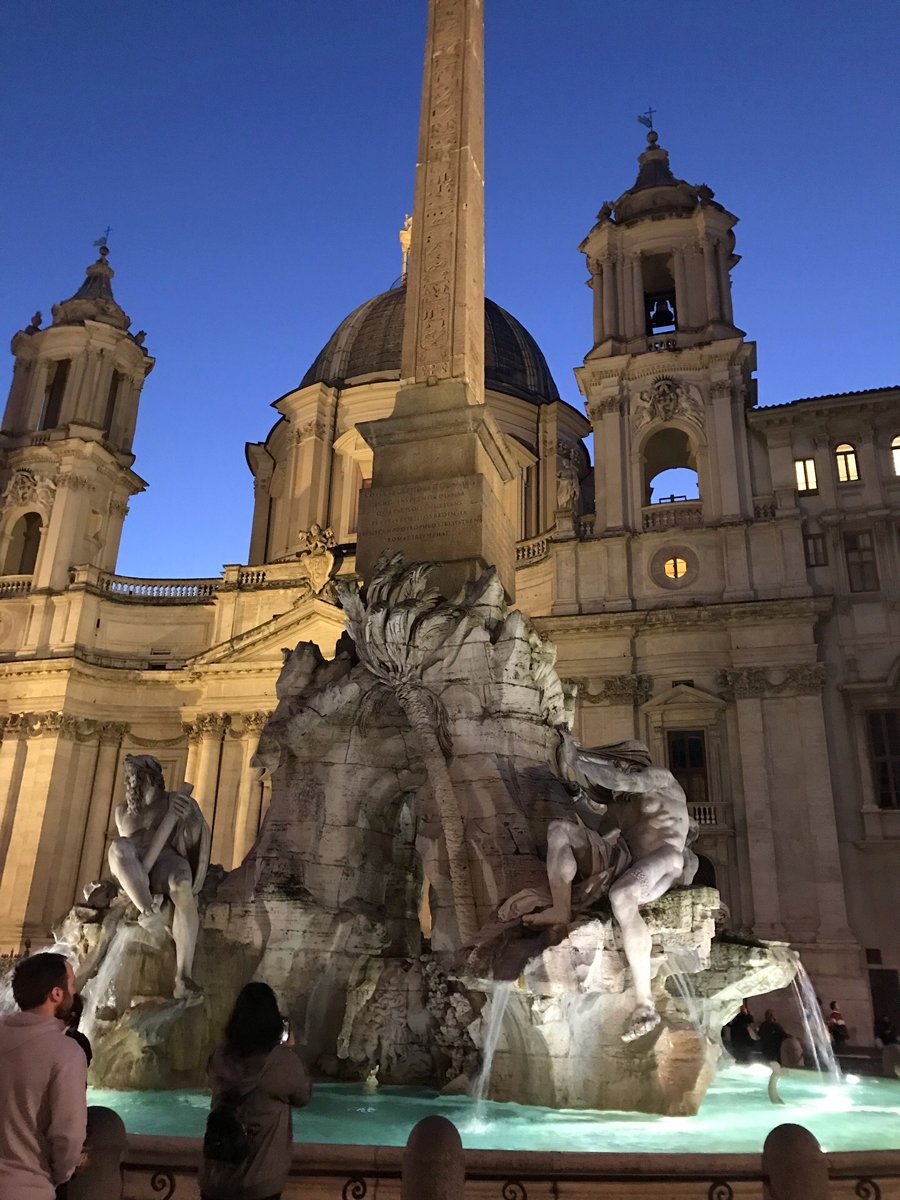 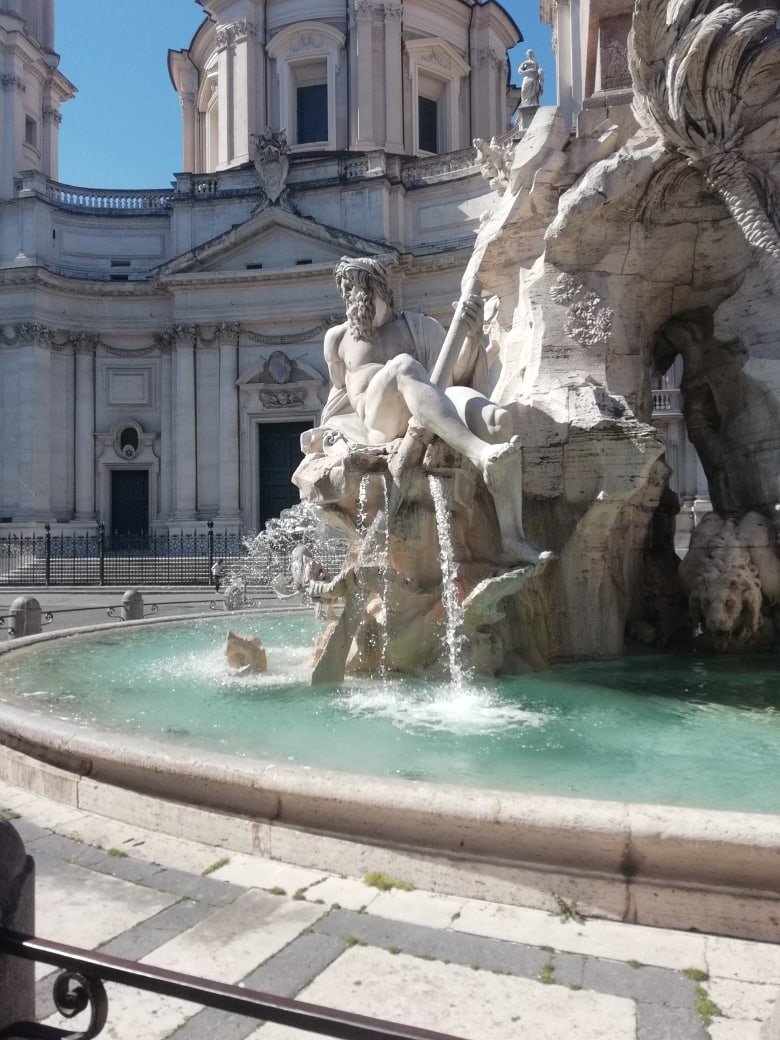 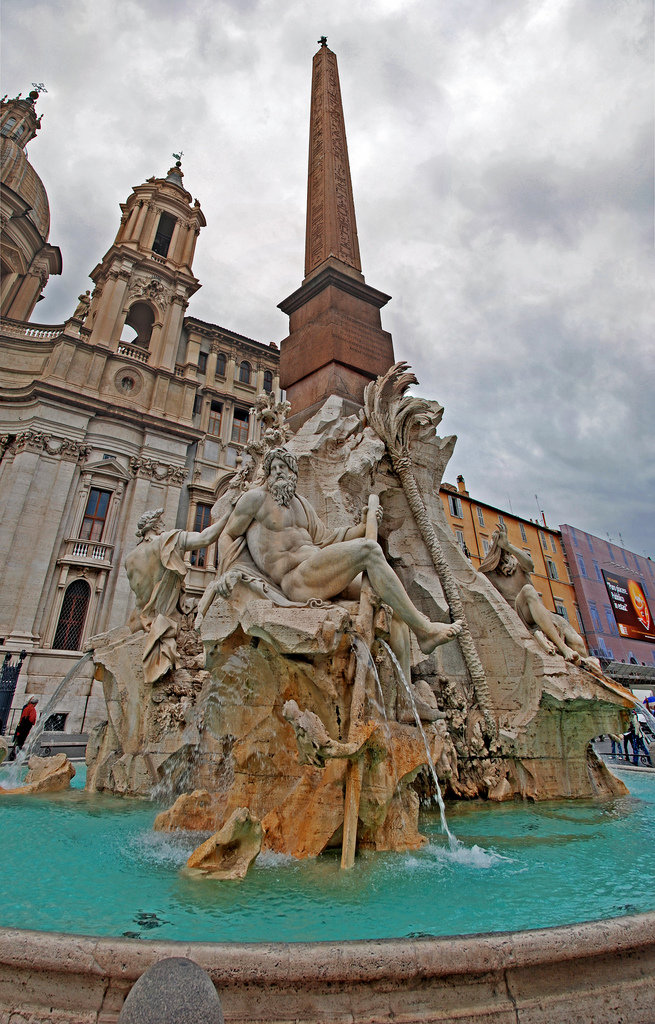 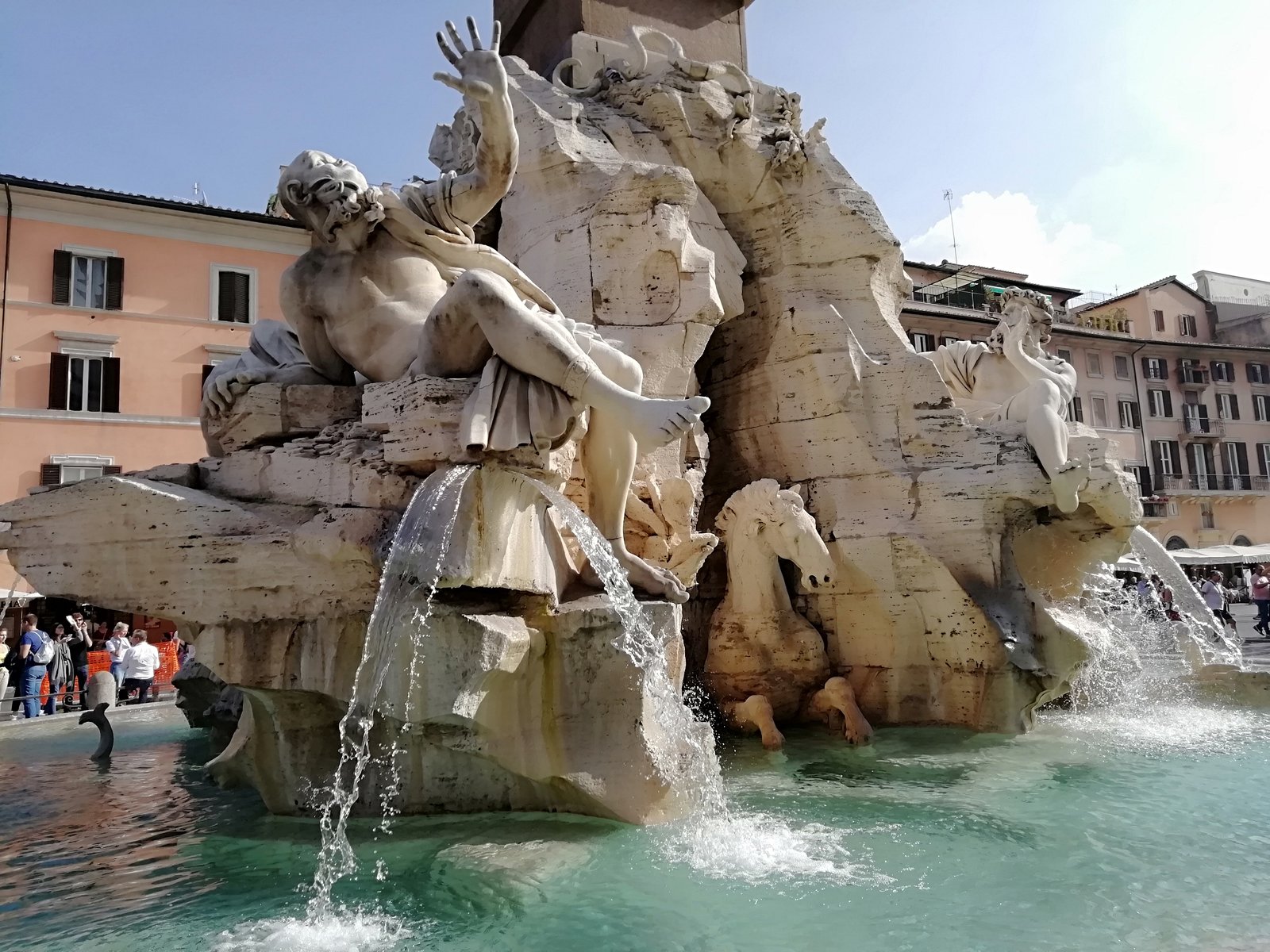 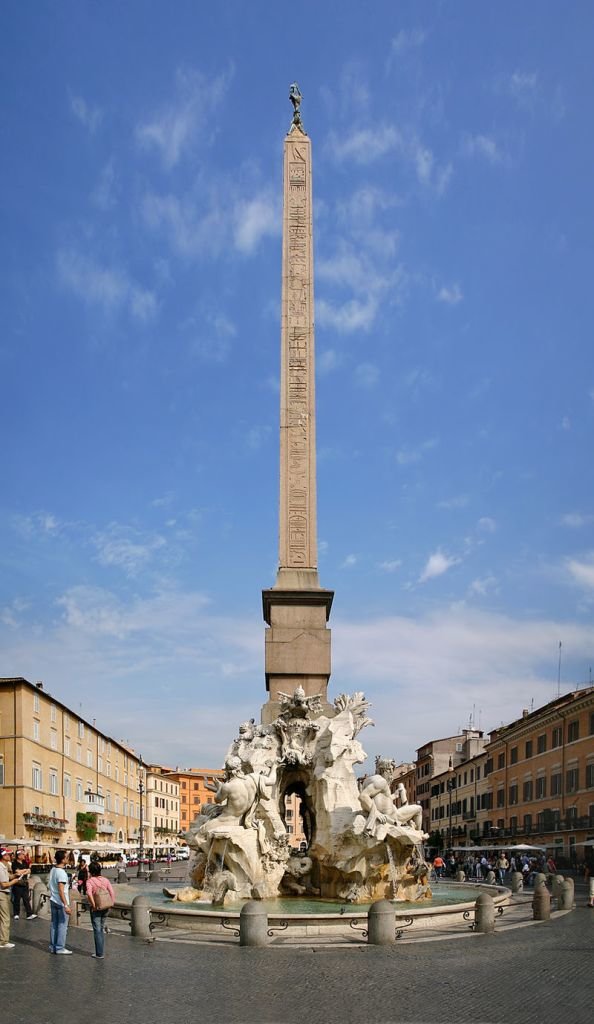 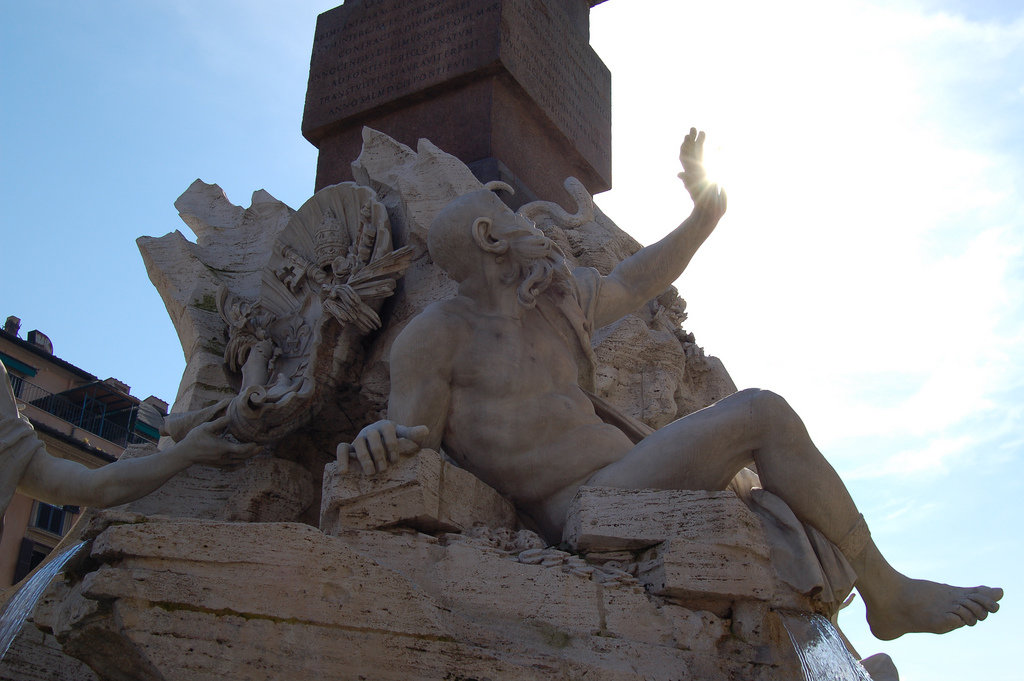 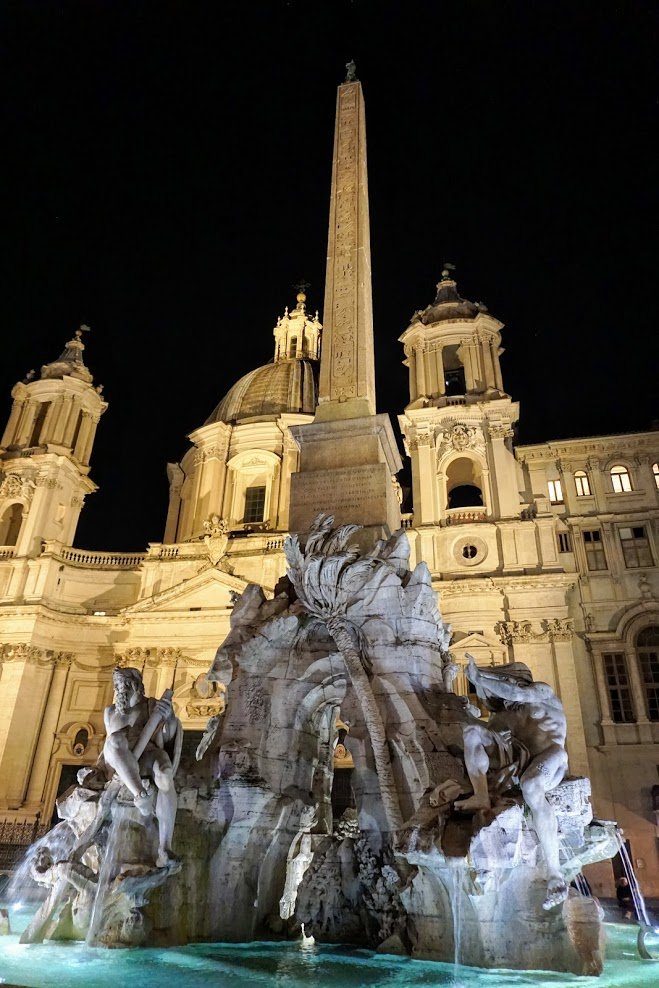 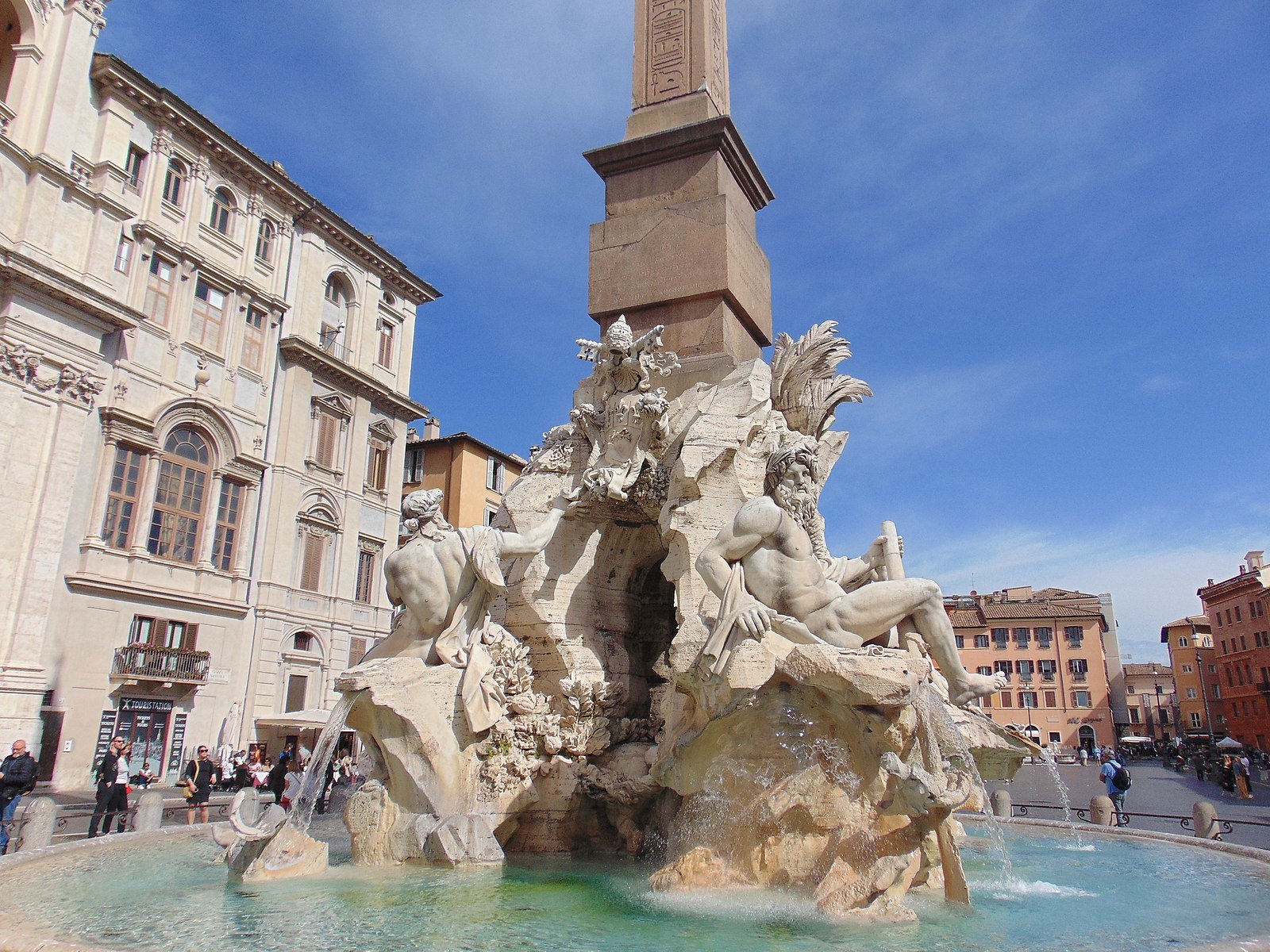 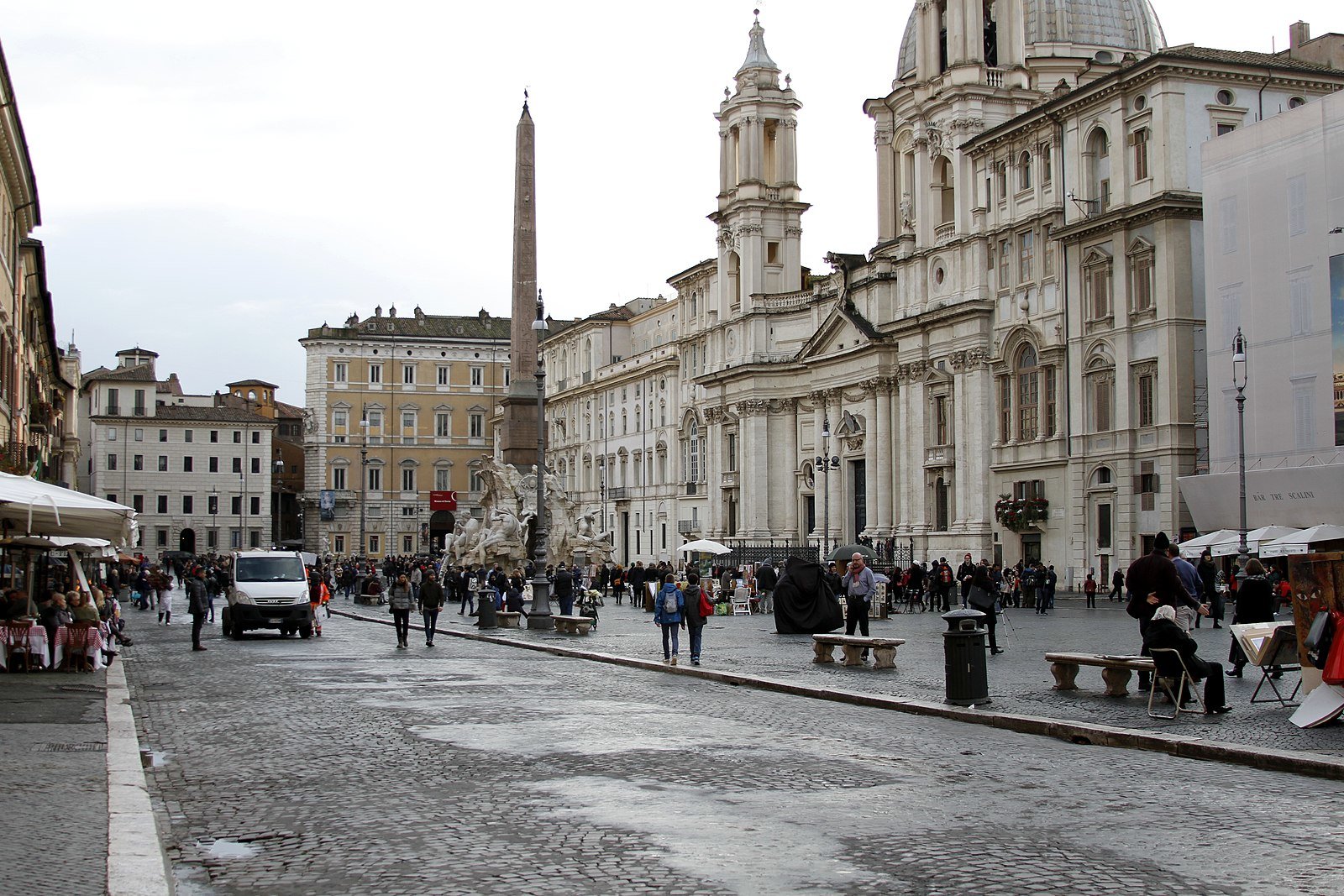 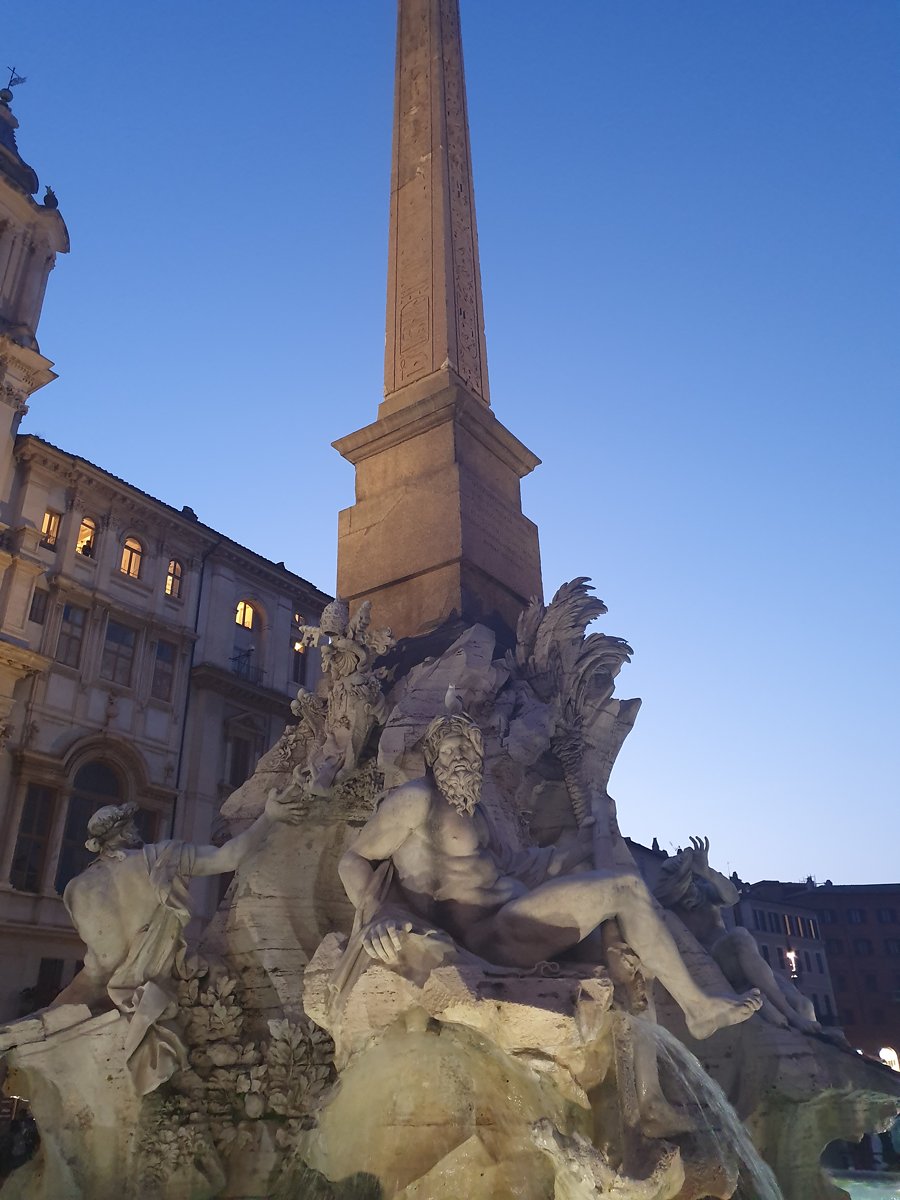 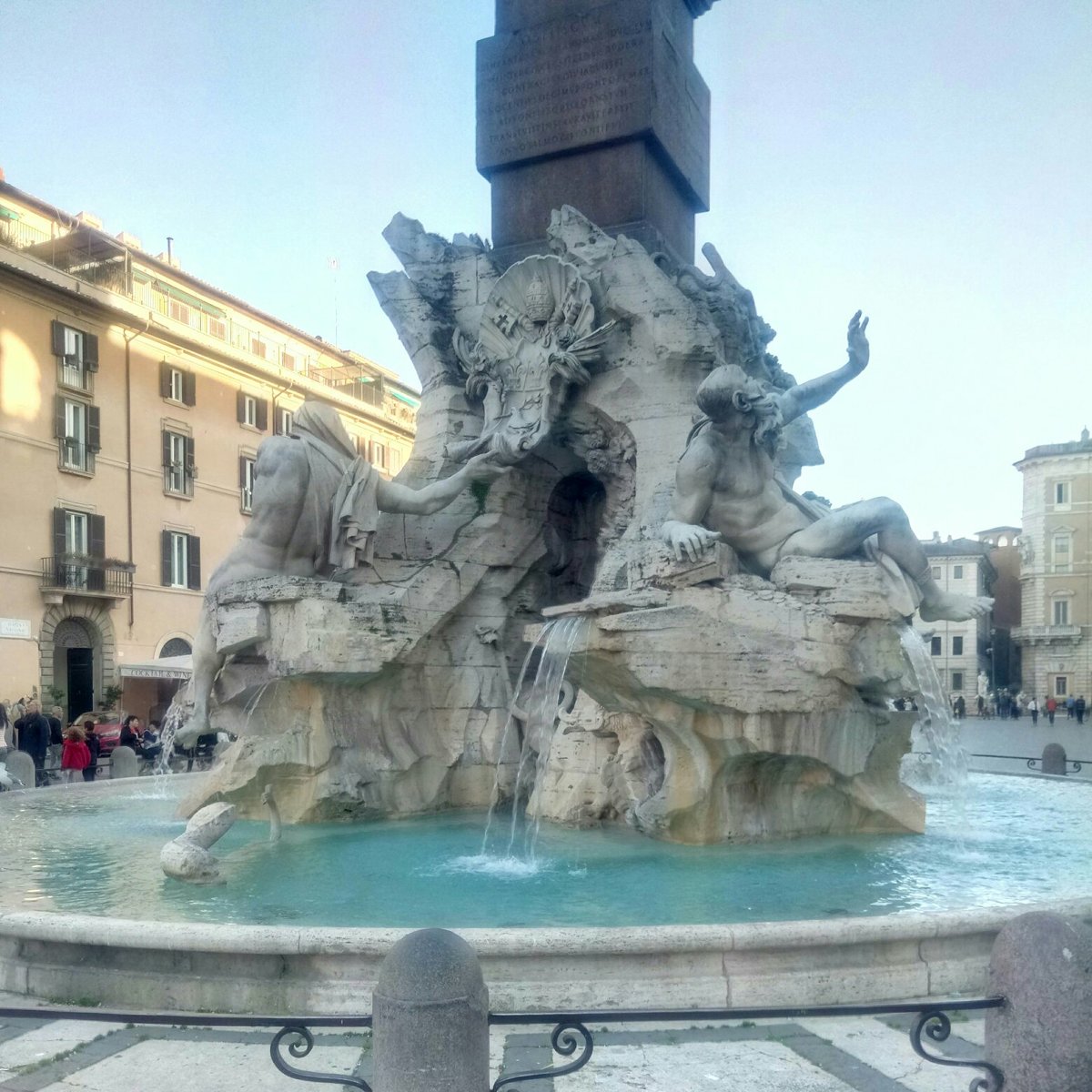 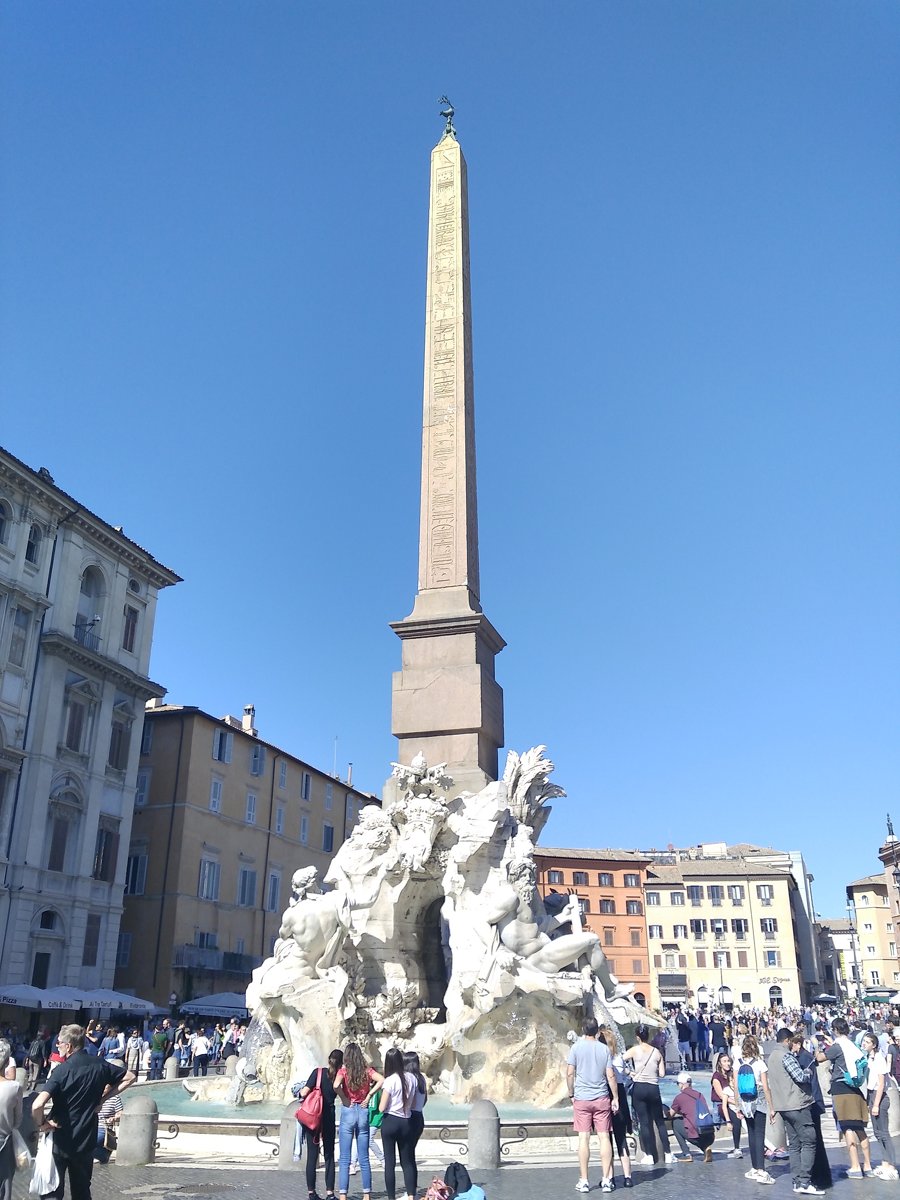 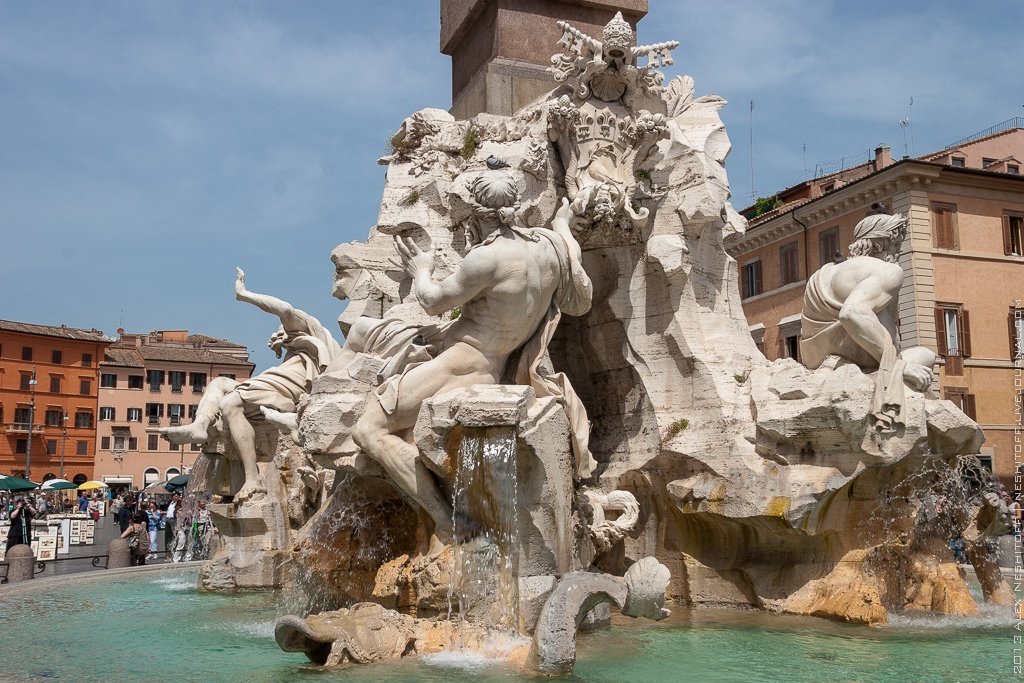