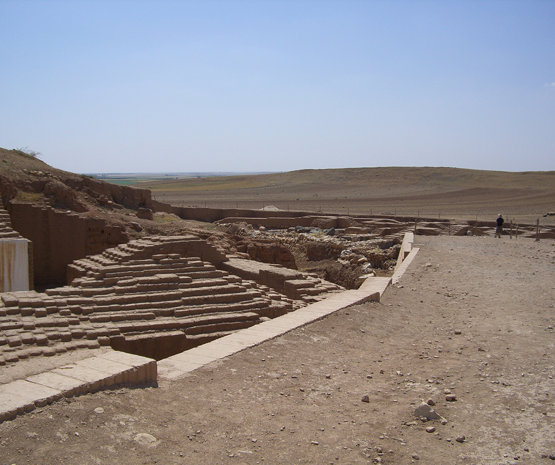 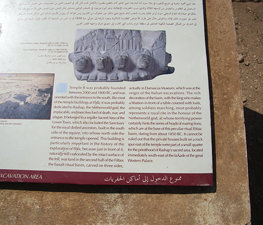 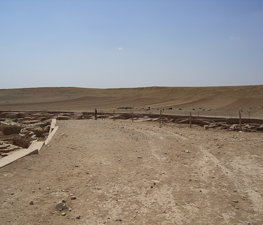 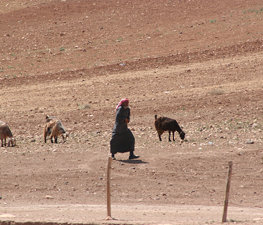 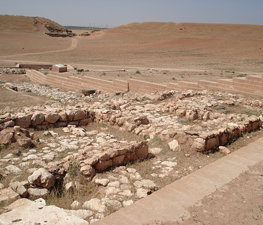 Ebla (Arabic: عبيل، إيبلا‎, modern Tell Mardikh, Syria) was an ancient city about 55 km (34 mi) southwest of Aleppo. It was an important city-state in two periods, first in the late third millennium BC, then again between 1800 and 1650 BC.

The site is most famous for the archive of about 15,000 cuneiform tablets found there,, dated from around 2250 BC, written in Sumerian script to record the Eblaite language — a previously unknown Semitic language.

In 1964, Italian archaeologists from the University of Rome La Sapienza under the direction of Paolo Matthiae began excavating at Tell Mardikh. In 1968 they recovered a statue dedicated to the goddess Ishtar bearing the name of Ibbit-Lim, a king of Ebla. That identified the city, long known from Egyptian and Akkadian inscriptions. In the next decade the team discovered a palace dating ca. 2500 – 2000 BC. About 15,000 well-preserved cuneiform tablets were discovered in the ruins. About 80% of the tablets are written using the usual Sumerian combination of logograms and phonetic signs, while the others exhibited an innovative, purely phonetic representation using Sumerian cuneiform of a previously unknown Semitic language, which was called Eblaite. Bilingual Sumerian/Eblaite vocabulary lists were found among the tablets, allowing them to be translated. Giovanni Pettinato and Mitchell Dahood believe the Eblaite language is West Semitic, however I. J. Gelb and others believe it is an East Semitic dialect, closer to the Akkadian language.

Ebla's close link to southern Mesopotamia, where the script had developed, further highlights the links between the Sumerians and Semitic cultures at that time.

It now appears that the building housing the tablets was not the palace library, which may yet be uncovered, but an archive of provisions and tribute, law cases and diplomatic and trade contacts, and a scriptorium where apprentices copied texts. The larger tablets had originally been stored on shelves, but had fallen onto the floor when the palace was destroyed. The location where tablets were discovered where they had fallen allowed the excavators to reconstruct their original position on the shelves: it soon appeared that they were originally shelved according to subject.

Ebla in the third millennium BC

The name "Ebla" means "White Rock", and refers to the limestone outcrop on which the city was built. (In Sumerian Ebla means Light Beer [source Sumerian Lexicon - Halloran] and the principal business of Ebla according to "The Archives of Ebla — Pettinato" was beer making. Eblamite is a hybrid cuneiform of Ebri/Hebrew and Sumerian, it is spelled the same as the Able of Genesis). Although the site shows signs of continuous occupation from before 3000 BC, its power grew and reached its apogee in the second half of the following millennium. Ebla's first apogee was between ca. 2400 and 2240 BC; its name is mentioned in texts from Akkad from ca. 2300 BC.

Most of the Ebla palace tablets, which date from that period, are about economic matters; they provide a good look into the everyday life of the inhabitants, as well as many important insights into the cultural, economic, and political life in northern Mesopotamia around the middle of the third millennium B.C. The texts are accounts of the state revenues, but they also include royal letters, Sumerian-Eblaite dictionaries, school texts and diplomatic documents, like treaties between Ebla and other towns of the region.

Ebla's most powerful king was listed as Ebrium, or Ibrium, who concluded the so-called "Treaty with Ashur", which offered the Assyrian king Tudia the use of a trading post officially controlled by Ebla.

The fifth and last king of Ebla during this period was Ebrium's son, Ibbi-Sipish, the first to succeed in a dynastic line, thus breaking with the established Eblaite custom of electing its ruler for a fixed term of office, lasting seven years. This absolutism may have contributed to the unrest that was ultimately instrumental in the city's decline. Meantime, however, the reign of Ibbi-Sipish was considered a time of inordinate prosperity, in part because the king was given to frequent travel abroad. It was recorded both in Ebla and Aleppo that he concluded specific treaties with neighboring Armi, as Aleppo was called at the time.

At that time, Ebla was a major commercial center. Its major commercial rival was Mari, and Ebla is suspected in having a hand in Mari's first destruction. The tablets reveal that the city's inhabitants owned about 200,000 head of mixed cattle (sheep, goats, and cows). The city's main articles of trade were probably timber from the nearby mountains (and perhaps from Lebanon), and textiles (mentioned in Sumerian texts from the city-state of Lagash). Most of its trade seems to have been directed towards Mesopotamia (chiefly Kish), and contacts with Egypt are attested by pottery fragments with the names of pharaohs Khafra and Pepi I. Handicrafts may also have been a major export: exquisite artifacts have been recovered from the ruins, including wood furniture inlaid with mother-of-pearl and composite statues created from different colored stones. The artistic style at Ebla may have influenced the quality work of the Akkadian empire.

The form of government is not well known, but the city appears to have been ruled by a merchant aristocracy who elected a king and entrusted the city's defense to paid soldiers. Ibrium and his son Ibbi-Sipish broke with tradition and introduced an absolute monarchy.

3rd millennium Ebla was a polytheistic society. Some well-known Semitic deities appear at Ebla, including Dagan (written as dBE), Ishtar (Ashtar), Resheph (Rasap), Kanish, Hadad (Hadda), Shapash (Shipish), and some otherwise unknown ones (Kura, Nidakul), plus a few Sumerian gods (Enki and Ninki) and Hurrian gods (Ashtapi, Hebat, Ishara).[] The four city gates were named after the gods Dagan, Baal (Hadda), Rasap, and Utu. Overall, about forty deities are mentioned in the tablets as receiving sacrifices.

Among Pettinato's controversial claims, he has also suggested that there was a change in the theophoric names shown in many of the tablets found in the archive from *El to *Yah, indicated in the example of the transition from Mika’il to Mikaya. He regards this as evidence for an early use of the divine name Yah, a god who he believes later emerged as Yahweh (YHWH). Bottero has suggested that this shift may instead indicate the popular acceptance of the Akkadian god Ea, introduced from the Sargonid Empire. Archi and Rainey, on the other hand, have suggested that the "-ya" is actually a diminutive ending used in shortened forms of personal names, and Müller has argued that the cuneiform sign NI should be interpreted, in this case, as an abbreviation for ì(-lí) ("god") rather than as ià (*Yah)—a view that Archi has since adopted with a modification, his reading been ì or lí. In any case, no list of gods or offerings mentions a deity by the name of Ya, and the connection with Yahweh is largely rejected today.

Many Old Testament Genesis names that have not been found in other Near Eastern languages have been reported to occur in similar forms in Eblaite (a-da-mu/Adam, h’à-wa/Eve, Jabal, Abarama/Abraham, Bilhah, Ishma-el, Isûra-el, Esau, Mika-el, Mikaya, Saul, David, etc.). A large number of Biblical locations (many of them known from other sources) have also been reported to occur in the texts: for example Ashtaroth, Sinai, Jerusalem (Ye-ru-sa-lu-um), Hazor, Lachish, Gezer, Dor, Megiddo, Joppa, Ur etc.[] Giovanni Pettinato has also claimed to find references to Sodom and Gomorrah. However, much of the initial media excitement about supposed Eblaite connections with the Bible, based on preliminary guesses and speculations by Pettinato and others, is now widely deplored as "exceptional and unsubstantiated claims" and "great amounts of disinformation that leaked to the public". Contrary to many earlier claims, the present consensus is that "Ebla has no bearing on the Minor Prophets, the historical accuracy of the biblical Patriarchs, Yahweh worship, or Sodom and Gomorra". In Ebla studies, the focus has shifted away from comparisons with the Bible, and Ebla is now studied above all as an incipient civilization in its own right. The tide turned after a bitter personal and scholarly conflict between the scientists involved, as well as what some described as interference by the Syrian authorities on political grounds.

Three versions of a text described as an Eblaite creation hymn have been found. They have been translated by Pettinato as

Some versions of Pettinato's translation use "he" instead of "you".

These lines seem to have points in common both with known Sumerian creation stories and with the Biblical account. Nevertheless, Alfonso Archi has objected that the original text is unclear to the point of being incomprehensible (texts from Ebla are difficult to read in general), leading him to conclude that "there is no Genesis creation story" in the Ebla documents.

The destruction of Ebla

Sargon of Akkad and his grandson Naram-sin, the conquerors of much of Mesopotamia, each claim to have destroyed Ebla; the exact date of destruction is the subject of continuing debate, but 2240 BC is a probable candidate. During the next three centuries, Ebla was able to regain some economic importance in the region, but never reached its former glory. It is possible the city had economic ties with the nearby city of Urshu, as is documented by economic texts from Drehem (a suburb of Nippur), and from findings in Kanesh.

Ebla in the second millennium BC

Several centuries after its destruction by the Akkadians, Ebla managed to recover some of its importance, and had a second apogee lasting from ca. 1850 to 1600 BC. Its people were then described as Amorites. The first known ruler of Ebla in this period was Megum, an Ensi (governor) for Ur III during the reign of Amar-Sin of Ur.

Ibbit-Lim was the first attested king.

Ebla is mentioned in texts from Alalakh from ca. 1750 BC. The city was destroyed again in the turbulent period of 1650 – 1600 BC, by a Hittite king (Mursili I or Hattusili I). This is attested to only by the fragmentary Hurro-Hittite Song of Release.

Ebla never recovered from its second destruction. The city continued as a small village until the 7th century AD, then was deserted and forgotten until its archaeological rediscovery.

Tips & Hints
Arrange By:
Popular first New first
There are no tips nor hints for Ebla yet. Maybe be you will be the first one to post useful information for fellow travellers? :)
3.1/10
116 people have been here
I've been here
Add to wishlist

See all hotels See all
DoubleTree by Hilton Van 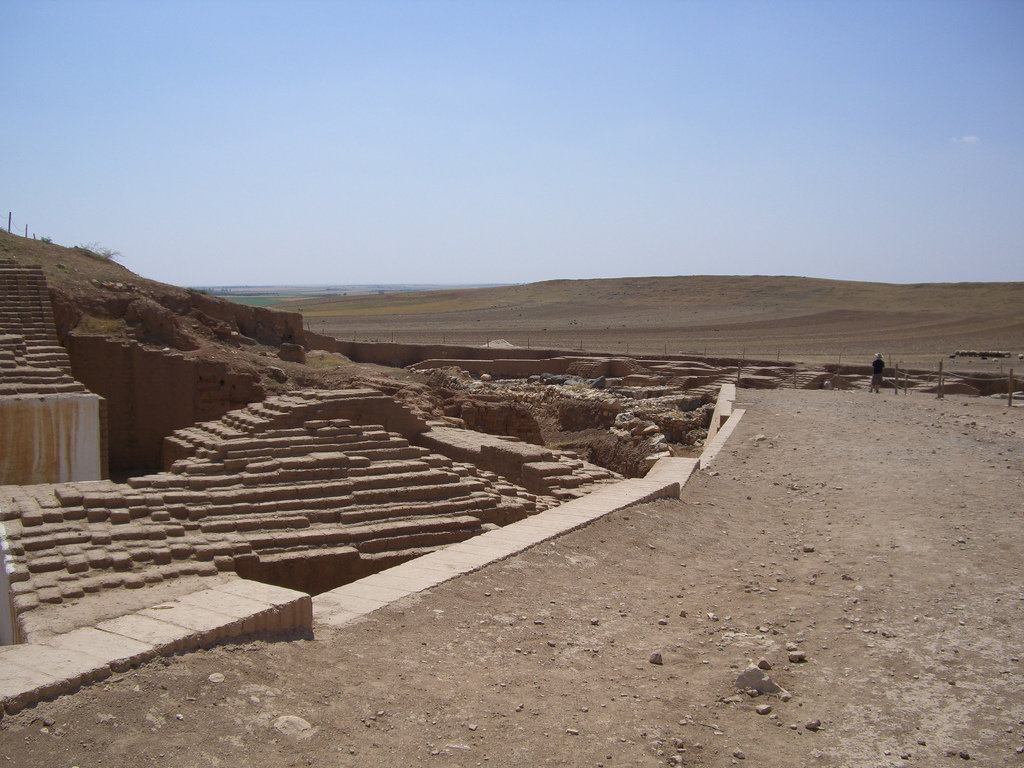 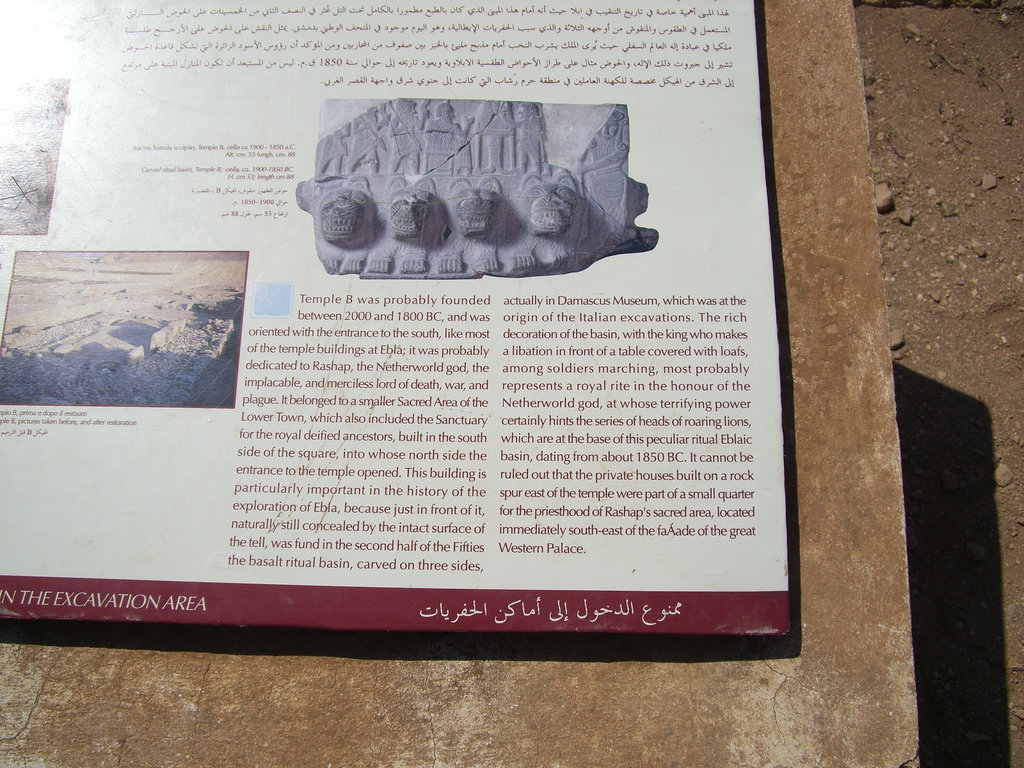 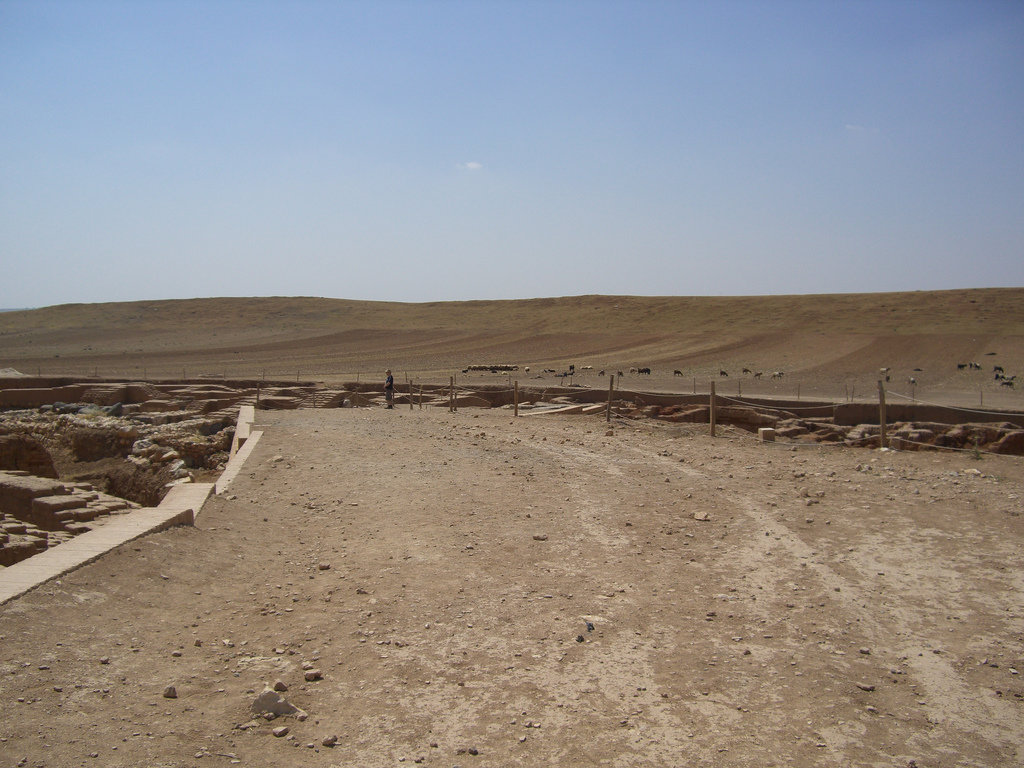 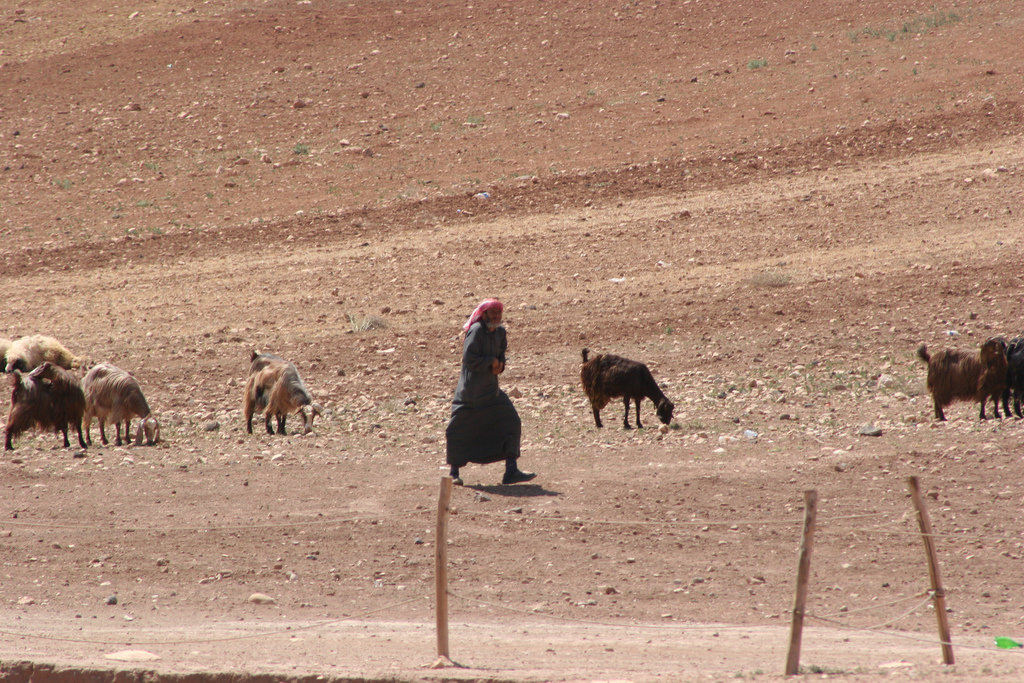 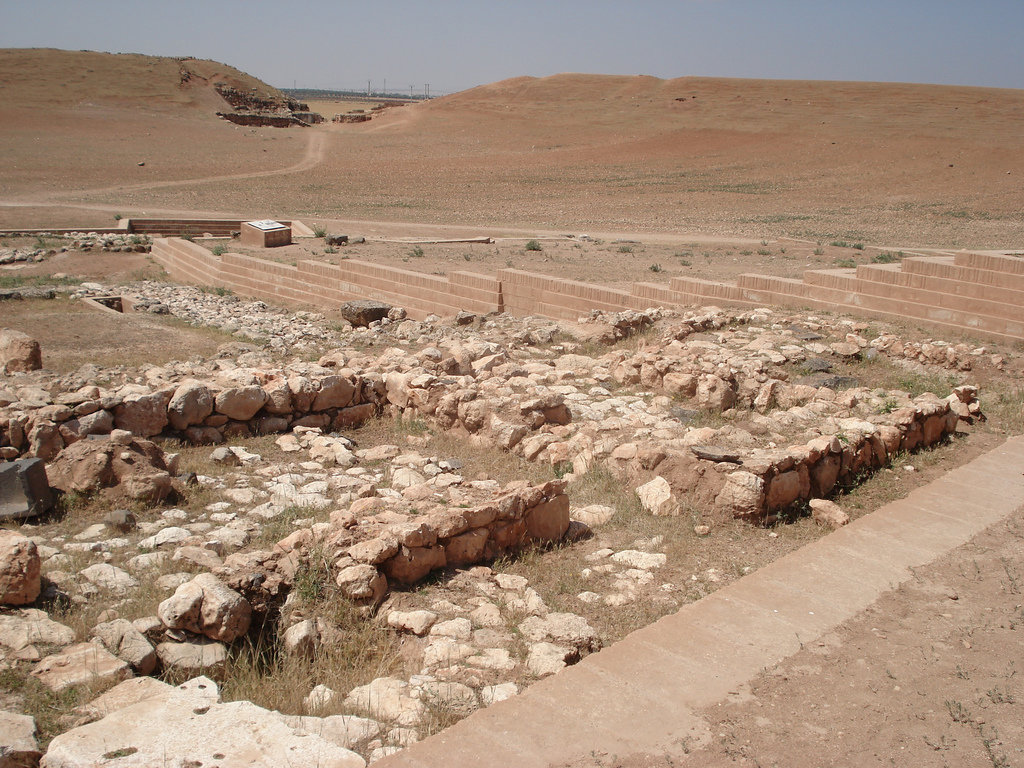 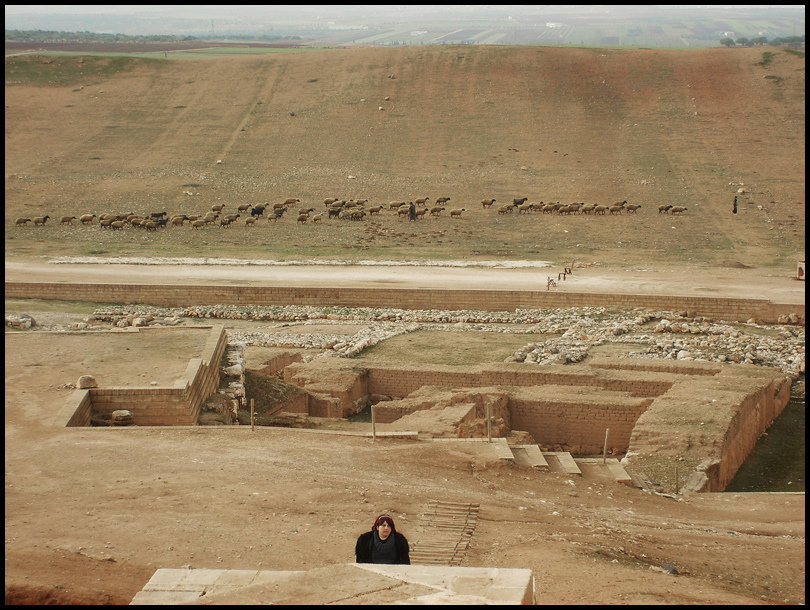