Dōtonbori or Dōtombori (道頓堀, pronounced ]) is one of the principal tourist destinations in Osaka, Japan, running along the Dōtonbori canal from Dōtonboribashi Bridge to Nipponbashi Bridge in the Namba district of the city's Chuo ward. Historically a theater district, it is now a popular nightlife and entertainment area characterized by its eccentric atmosphere and large illuminated signboards.

One of the area's most prominent features, a billboard for confectionery company Glico displaying the image of a runner crossing a finishing line, is seen as an icon of Osaka within Japan.

Dōtonbori traces its history back to 1612, when a local entrepreneur, Yasui Dōton, began expanding the tiny Umezu River, which ran east to west, hoping to increase commerce in the region by connecting the two branches of the Yokobori River, which ran north to south, with a canal. Dōton’s project was interrupted when he died defending Toyotomi Hideyori in the ill-fated Siege of Osaka, but his cousins finished the canal in 1615. The new lord of Osaka Castle, Tadaki Matsudaira, named the canal and avenue beside it Dōtonbori ("bori" from "hori", meaning "canal"), even though Doton had been on the losing side during the siege.
The character of Dōtonbori became defined in 1621 when the Tokugawa Shogunate instituted urban planning, designating Dōtonbori as the entertainment district of Osaka. By 1662 the avenue boasted six Kabuki theatres and five Bunraku theatres, as well as the unique Takeda Karakuri mechanical puppet theatre. Many restaurants and cafes were built to cater to the flood of tourists and entertainment-seekers pouring nightly into Dōtonbori.

Over the years, declining interest in traditional forms of entertainment led to the closing of most of Dōtonbori's original attractions. Its five remaining theatres were bombed and destroyed during World War II.

Osaka is a major destination for tourists, both domestic and international. The Dotonbori district is a popular area for visitors to the city and boasts a number of well known restaurants offering a range of traditional and modern Japanese dishes.

Kuidaore (食い倒れ) is a Japanese word meaning roughly “to ruin oneself by extravagance in food.” It is sometimes romanised as cuidaore, and is part of a larger proverb: "Dress into ruin in Kyoto, eat into ruin in Osaka" (京の着倒れ、大阪の食い倒れ).

The word is associated with Dōtonbori, and is often used in tourist guides and advertisements. It can be seen in the names of several locations in Dōtonbori, such as the mascot Kuidaore Taro and the defunct restaurant Cui-daore.

Some foods associated specifically with Osaka and kuidaore include okonomiyaki, takoyaki, and kitsune udon.

Motor vehicles cross the canal by way of either Dōtonboribashi (part of Midosuji Avenue) on one side or Nipponbashi (part of Sakaisuji Avenue) on the other, flanking the west and east of the main Dōtonbori district. In between are several footbridges connecting the Namba and Shinsaibashi shopping districts to Dōtonbori, such as Tazaemonbashi and Aiaibashi.

Ebisubashi is just under the Glico Man billboard. Originally constructed to provide access to the nearby Ebisu Shrine, the bridge is the location of a legendary curse on Osaka's baseball team, the Hanshin Tigers. More practically, the bridge provides a link between the Shinsaibashi-suji and Ebisubashi-suji shopping districts.

Due to the familiarity of the Glico Man, Ebisubashi makes for a convenient gathering point, hence its nicknames, nanpa-bashi, mostly used by foreigners, and hikkake-bashi ("the pulling bridge"), mostly used by native Japanese.

Canal and bridges near Ebisu Bashi in Osaka — sergejf @ Flickr

Aivan Magno
Don't forget to take a selfie in the Glico Man! And check out one of the biggest Don Quixote for cheap finds. From food to cosmetics!

A Hazet
Dotombori River is the most famous waterways in Osaka. many stores & restaurants have been built to face the Riverwalk along both side, made this area into a main tourists destination #TravelingOsaka

Sofia Papastamelos
This place is hopping at night! Cross over the bridge into the arcade for some great street food.

Elizabeth Lee
Nice to walk along at night and soak in the bustling atmosphere.

Covent Garden (pronounced ) is a district in London, England, located 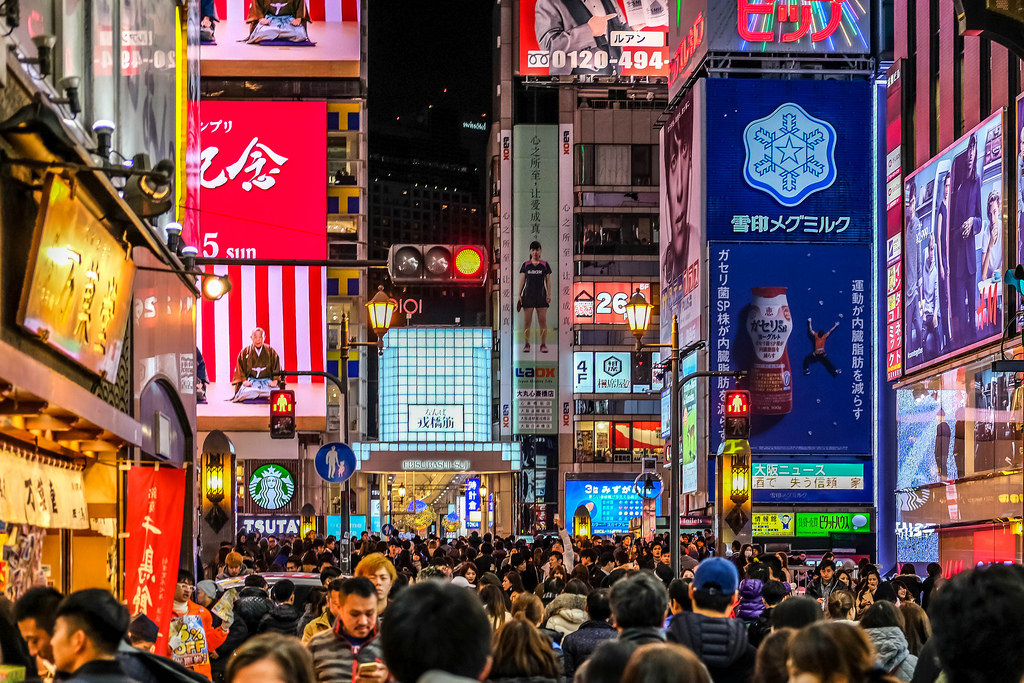 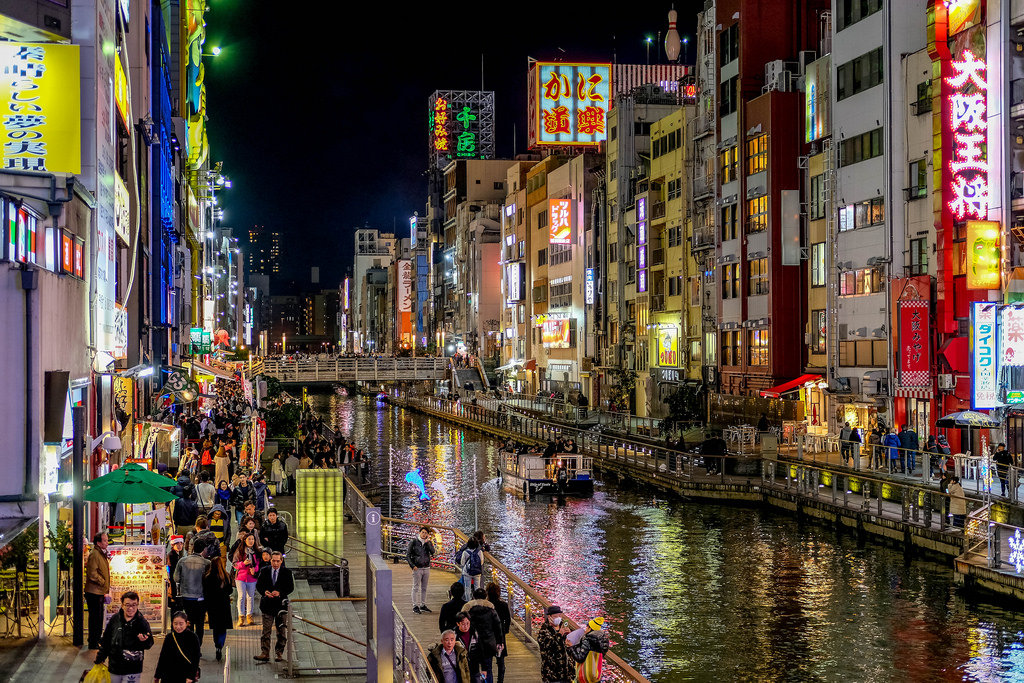 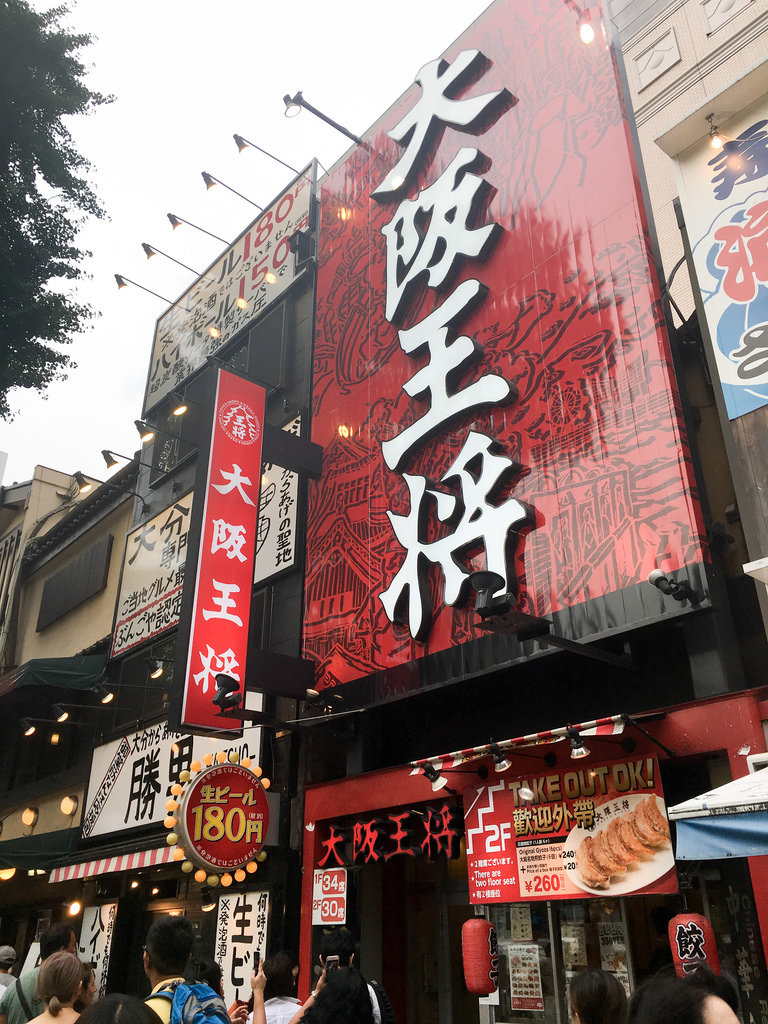 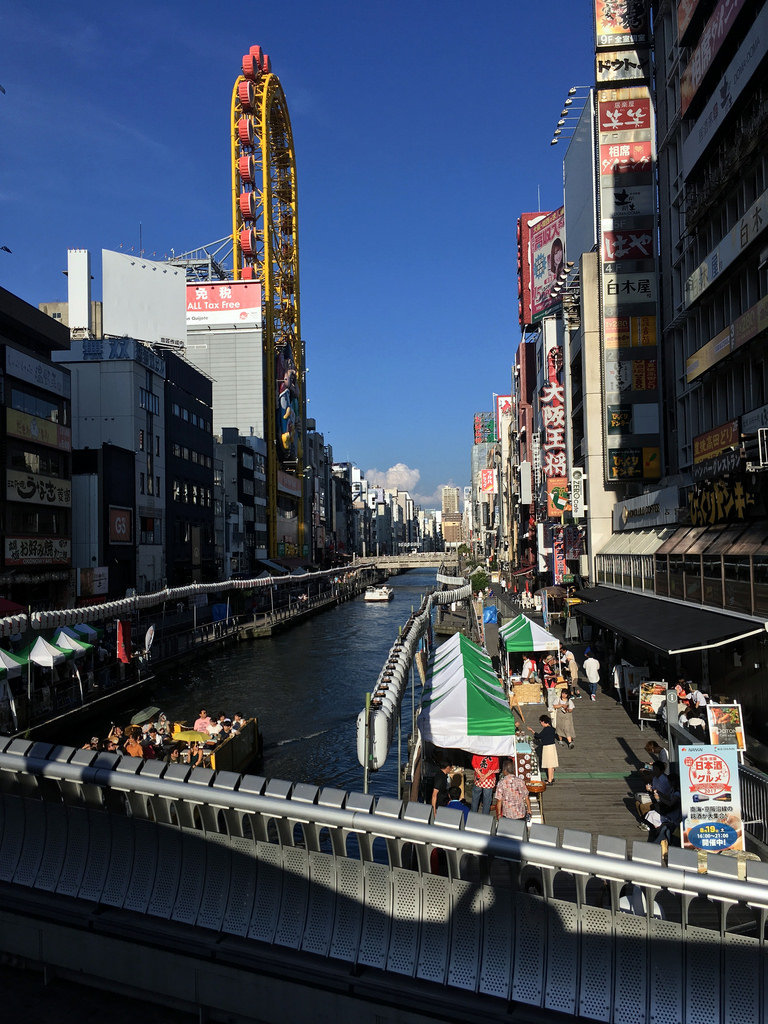 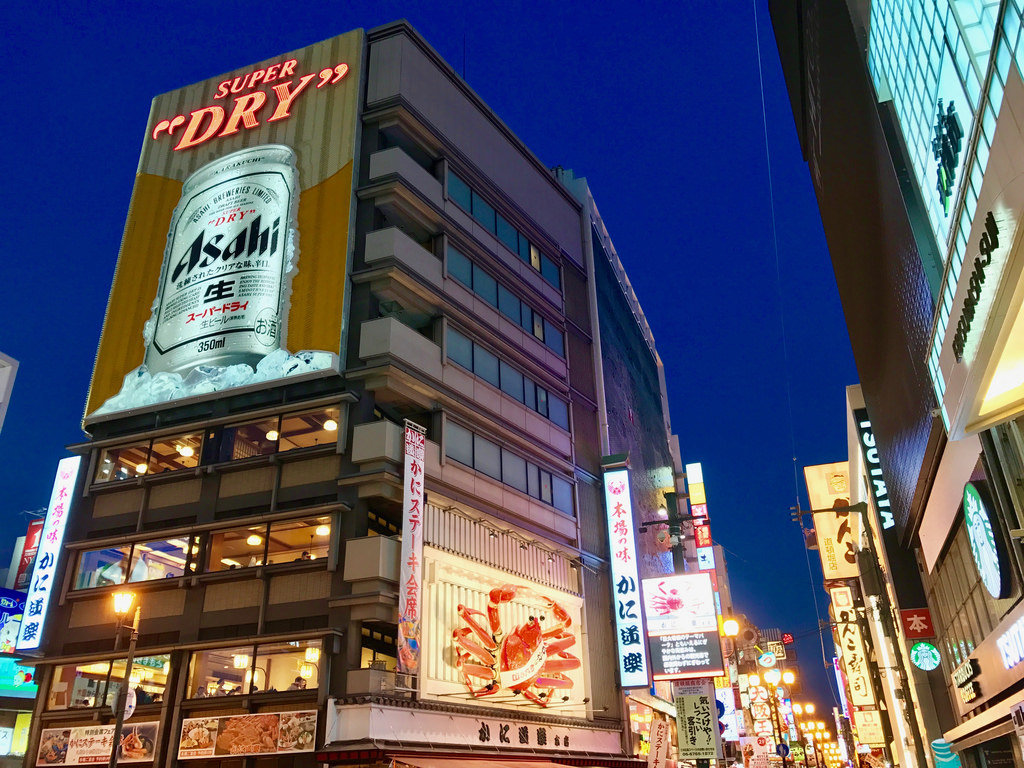 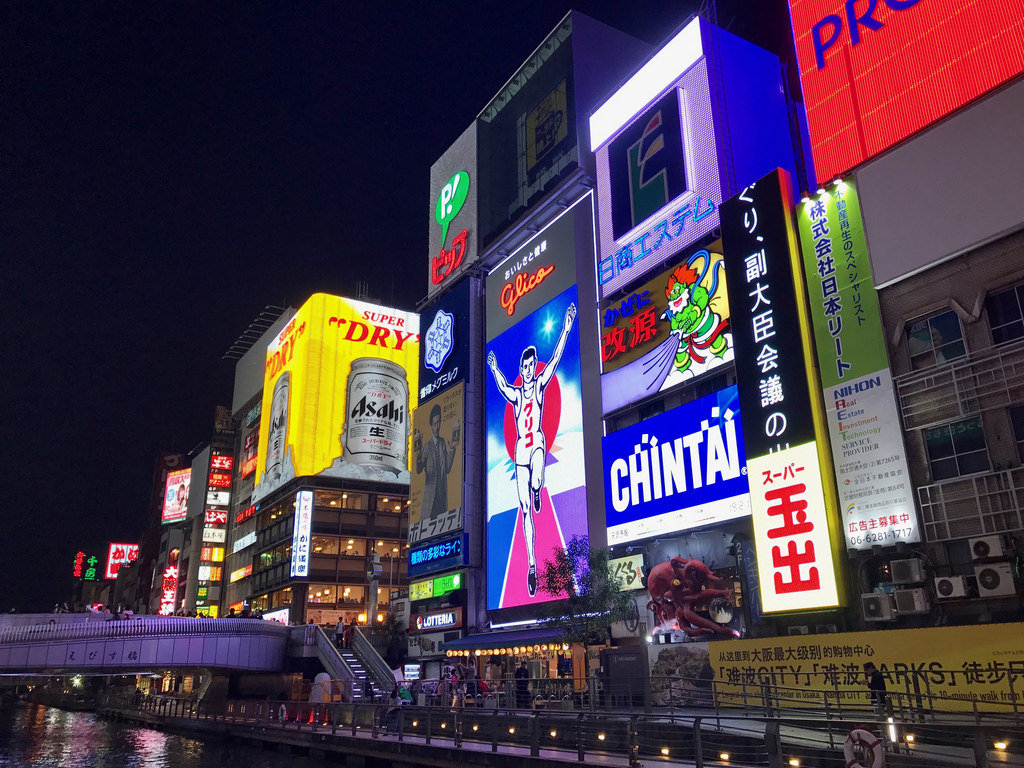 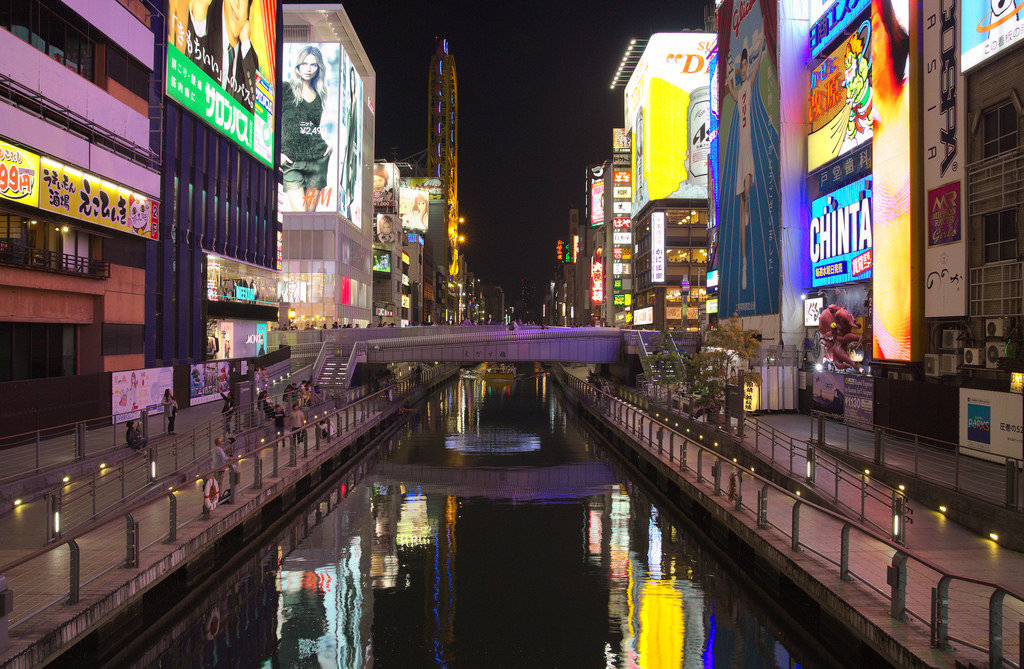