×
What are you looking for?
See all results
Anglican cathedrals in Coventry 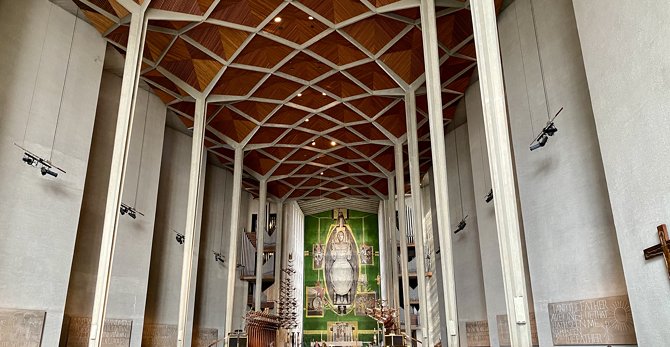 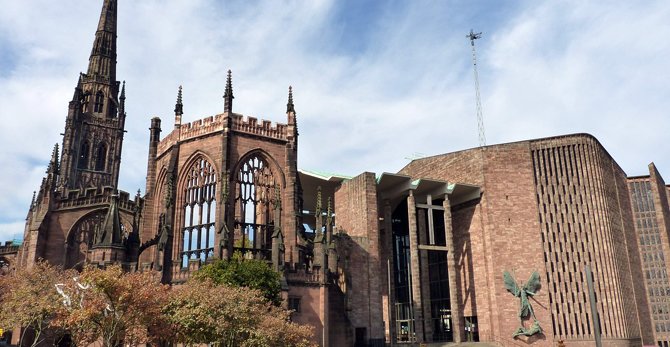 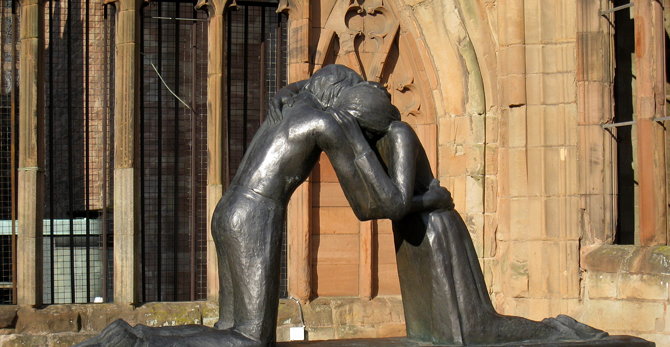 Coventry Cathedral, also known as St Michael's Cathedral, is the seat of the Bishop of Coventry and the Diocese of Coventry, in Coventry, West Midlands, England. The current (9th) bishop is the Right Revd Christopher Cocksworth.

The city has had three cathedrals. The first was St. Mary's, a monastic building, only a few ruins of which remain. The second was St Michael's, a 14th century Gothic church later designated Cathedral, that remains a ruined shell after its bombing during the Second World War. The third is the new St Michael's Cathedral, built after the destruction of the former and a celebration of 20th century architecture.

The Revd. Canon Anthony Darby was previously Canon Theologian; however, he has now retired.

The first cathedral in Coventry was St Mary's Priory and Cathedral, which held such status from a date between 1095 and 1102, when Bishop Robert de Limesey moved the Bishop's see from Lichfield to Coventry, until 1539 when it fell victim to King Henry VIII's Dissolution of the Monasteries. Prior to 1095, it had been a small Benedictine monastery (endowed by Earl Leofric and Lady Godiva in 1043), but shortly after this time rebuilding began and by the middle of the 13th century it was a cathedral of 425 feet in length and included many large outbuildings. Leofric was probably buried within the original Saxon church in Coventry. However, records suggest that Godiva was buried at Evesham Abbey, alongside her father confessor, Prior Aefic.

St Michael's church was largely constructed between the late 14th century and early 15th century. It was one of the largest parish churches in England when, in 1918, it was elevated to cathedral status on the creation of Coventry Diocese. This St Michael's Cathedral now stands ruined, bombed almost to destruction during the Coventry Blitz on 14 November 1940 by the German Luftwaffe. Only the tower, spire, the outer wall and the bronze effigy and tomb of its first bishop, Huyshe Wolcott Yeatman-Biggs, survived. The ruins of this older cathedral remain hallowed ground and are listed as Grade A (equivalent to Grade I).

The new St Michael's Cathedral, built next to the remains of the old, was designed by Basil Spence and Arup, built by John Laing and is a Grade I listed building.

The selection of Basil Spence for the work was a result of a competition held in 1950 to find an architect for the new Coventry Cathedral; his design was chosen from over two hundred submitted.

Spence (later knighted for this work) insisted that instead of re-building the old cathedral it should be kept in ruins as a garden of remembrance and that the new cathedral should be built alongside, the two buildings together effectively forming one church. The use of Hollington sandstone for the new Coventry Cathedral provides an element of unity between the buildings.

The foundation stone of the new cathedral was laid by the Queen on 23 March 1956. It was consecrated on 25 May 1962, and Benjamin Britten's War Requiem, composed for the occasion, was premiered in the new cathedral on 30 May to mark its consecration.

Like its German counterpart in Berlin, its modernist design caused much discussion, but on opening to the public it rapidly became a hugely popular symbol of reconciliation in post-war Britain. The unconventional spire (known as a flèche) was lowered onto the flat roof by helicopter. The interior is notable for a large tapestry of Christ, designed by Graham Sutherland, the emotive sculpture of the Mater Dolorosa by John Bridgeman in the East end, and the Baptistry window by John Piper, of abstract design that occupies the full height of the bowed baptistery, which comprises 195 panes, ranging from white to deep colours. The other stained glass windows, by Keith New, are generally regarded as less successful. Also worthy of note is the Great West Window known as the Screen of Saints and Angels, engraved directly onto the screen in expressionist style by John Hutton. (Although referred to as the West Window, this is the 'liturgical west' opposite the altar which is traditionally at the east end. In this cathedral the altar is actually at the north end.)The foundation stone, the ten stone panels inset into the walls of the cathedral called the Tablets of the Word, and the baptismal font were designed and carved by the emigre German letter carver Ralph Beyer.

Being built on the site of a Benedictine monastery, there has always been a gentle Benedictine influence on the Cathedral Community. A number of the Cathedral staff become third order (lay) Benedictines and there are often Cathedral retreats to Burford Priory. Since the opening of the new Cathedral in 1962 there has been a gentle evangelical emphasis. This has been strengthened by the current Dean John Irvine who was involved in creating the Alpha Course and previously worked for Holy Trinity Brompton, and also as Vicar of the first Brompton church plant, St Barnabas, Kensington. The Cathedral has a strong emphasis on the Bible[] and aims to be a centre for good preaching and training for the diocese. It runs regular mission events headed by residentiary Canon Yvonne Richmond (one of the only Canons for Mission in the UK with such a strong focus on evangelism) such as the innovative Spirit of Life days where over 2000 local residents are encouraged to explore their faith in God through Christian spirituality. The Cathedral is also known for its innovation in its services. As well as the expected traditional services, there is a 6 p.m. service with contemporary music, preaching and prayer ministry. The Cathedral Youth Work runs Goth church and Urban Church outreach congregations for local groups of young people, an equipping and supporting cell group for youth workers within Coventry churches as well as a number of other regular groups. There continues to be a strong influence of reconciliation within the theology (both vertical - reconciling people to God and horizontal - reconciling individuals and groups). This is present throughout the ministry of the cathedral but is most clearly seen in the International Center for Reconciliation and the International Network of Communities of the Cross of Nails. The reconciliation work exists locally in reconciling churches and community groups but also internationally (predominantly in the Middle East and central Africa) working with terrorists and dictators as well as local churches, tribes and gangs.

Wooden Cross and Cross of Nails

The wooden cross and the cross of nails were created after the cathedral was bombed during the Coventry Blitz of World War II. The cathedral stonemason, Jock Forbes, saw two wooden beams lying in the shape of a cross and tied them together. A replica of the wooden cross built in 1964 has replaced the original in the ruins of the old cathedral on an altar of rubble. The original is now kept in St. Michael's Hall below the new cathedral.

Another cross was made of three nails from the roof truss of the old cathedral by Provost Richard Howard of Coventry Cathedral. It was later transferred to the new cathedral, where it rests on its altar. The cross of nails has become a symbol of peace and reconciliation across the world. There are over 160 Cross of Nails Centres all over the world, all of them bearing a cross made of three nails from the ruins, similar to the original one.

One of the crosses made of nails from the old cathedral was donated to the Kaiser Wilhelm Memorial Church in Berlin, which was destroyed by Allied bomb attacks and is also kept as a ruin alongside a newer building. A copy of the Stalingrad Madonna by Kurt Reuber that was drawn in 1942 in Stalingrad (now Volgograd) is shown in the cathedrals of all three cities (Berlin, Coventry, and Volgograd) as a sign of the reconciliation of the three countries that were once enemies.

A medieval cross of nails has also been carried on board all British warships to subsequently bear the name HMS Coventry. The cross of nails was on board HMS Coventry when she was sunk by enemy action in the Falklands War. The cross was salvaged by Royal Navy divers, and presented to Coventry Cathedral by the ship's Captain and colleagues.

A 1962 BBC documentary entitled 'Act of Faith' on Coventry Cathedral, its destruction and rebuilding, narrated by Leo Genn, was broadcast on British television.

The Precentor of the new Coventry Cathedral at the opening service was Canon Joseph Poole. The service was televised and watched by many.

The cathedral has a pipe organ by Harrison and Harrison dating from 1962. A specification of the organ can be found on the National Pipe Organ Register.

See also the List of Organ Scholars of Coventry Cathedral.

The cathedral in popular culture

Coventry University
Join in 'The Big Draw' competition on the 29th October 2011!

Stratford Butterfly Farm is a visitor attraction in

Canterbury Cathedral in Canterbury, Kent, is one of the oldest and 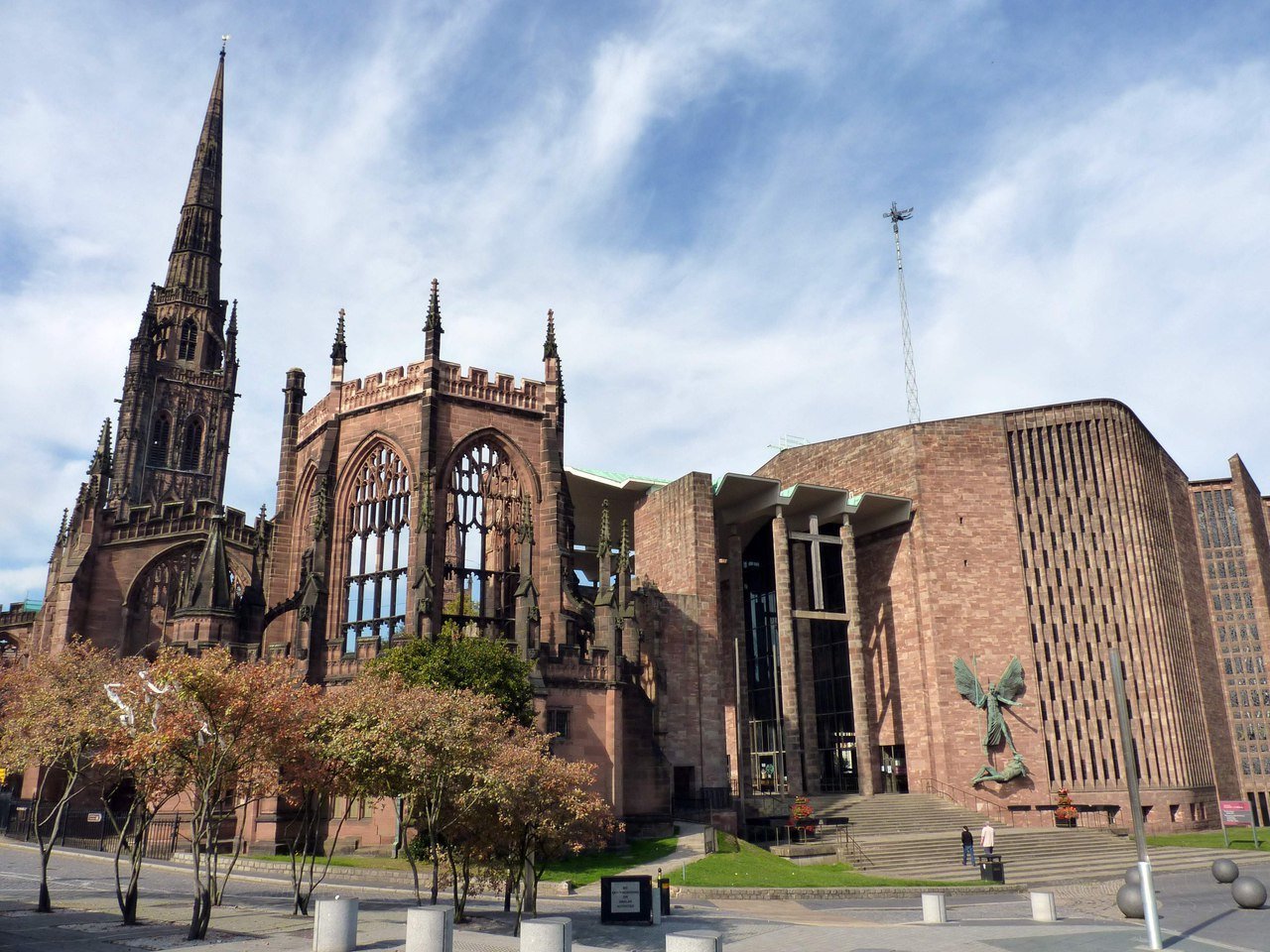 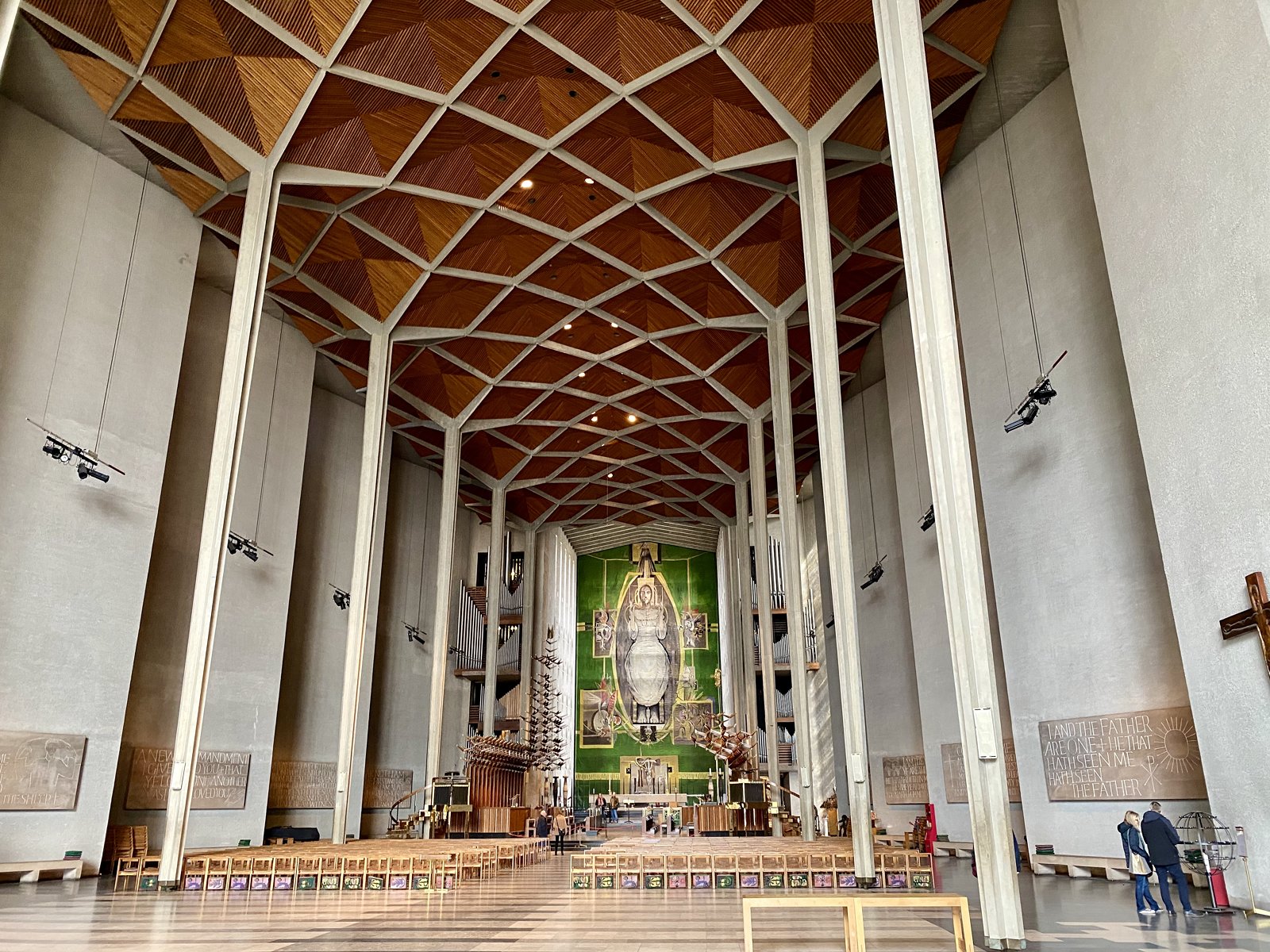 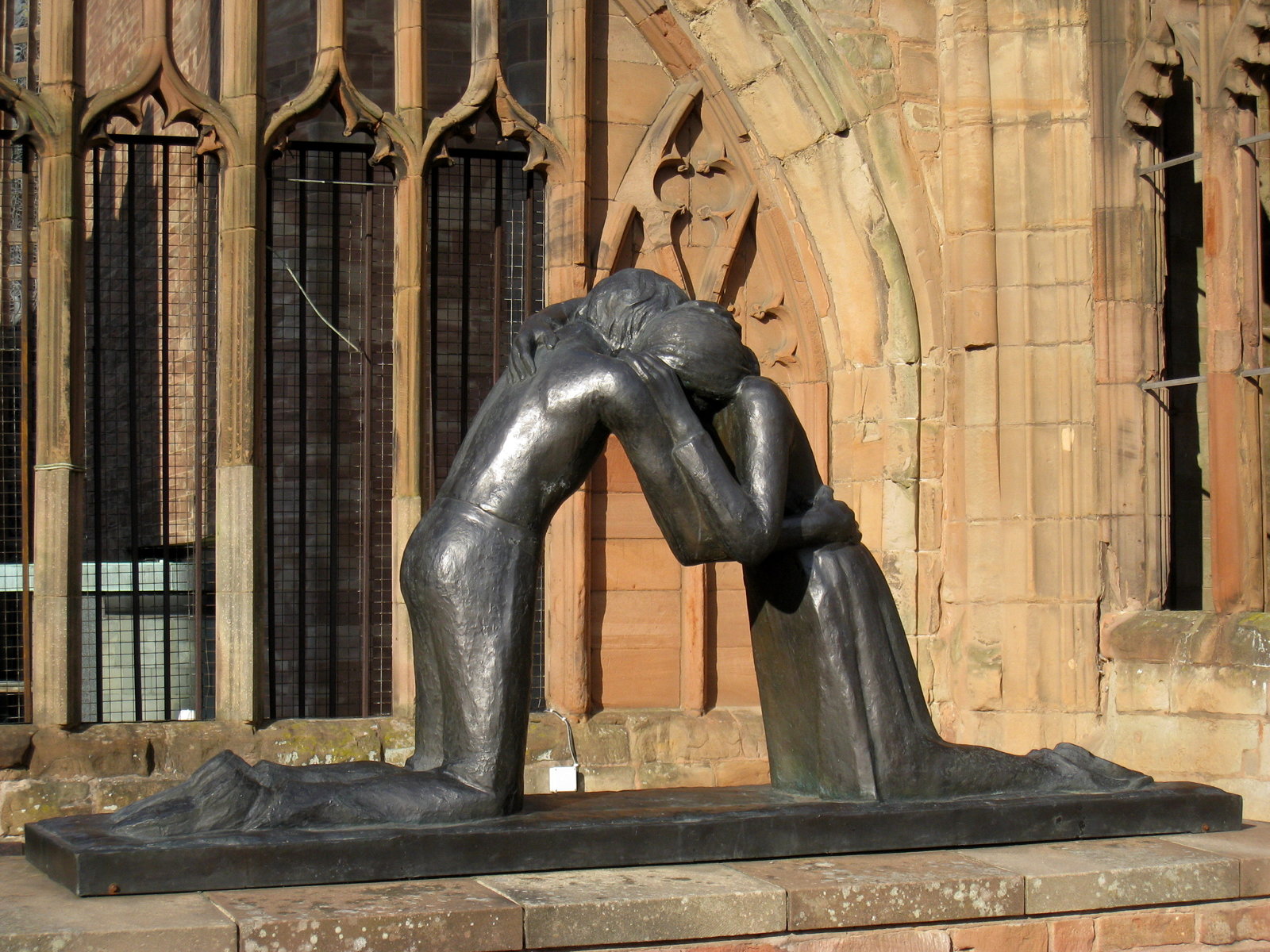 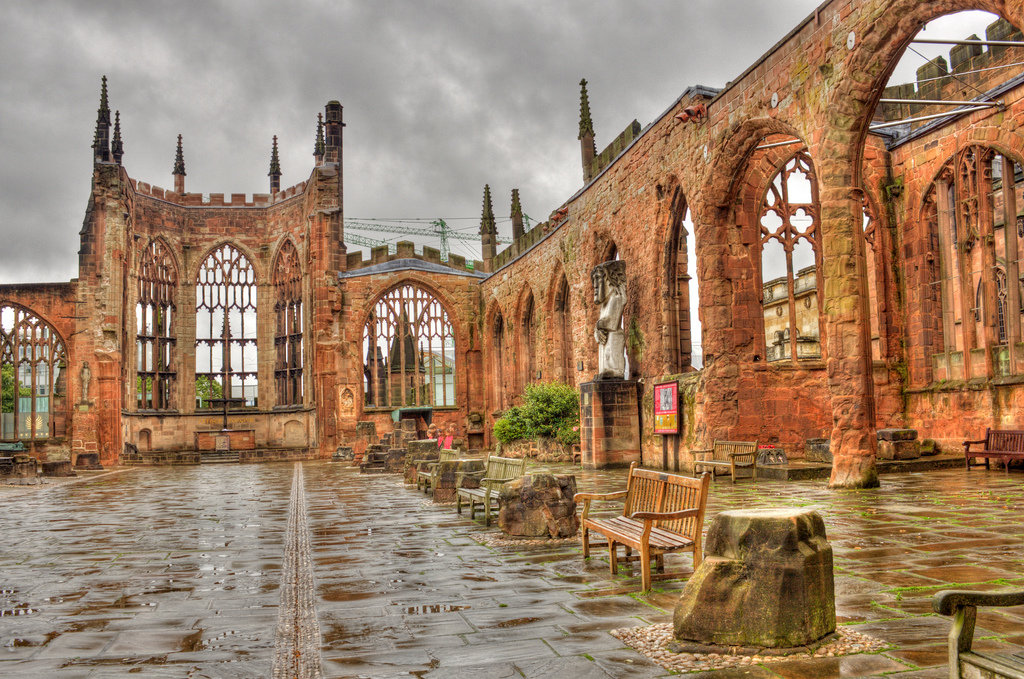 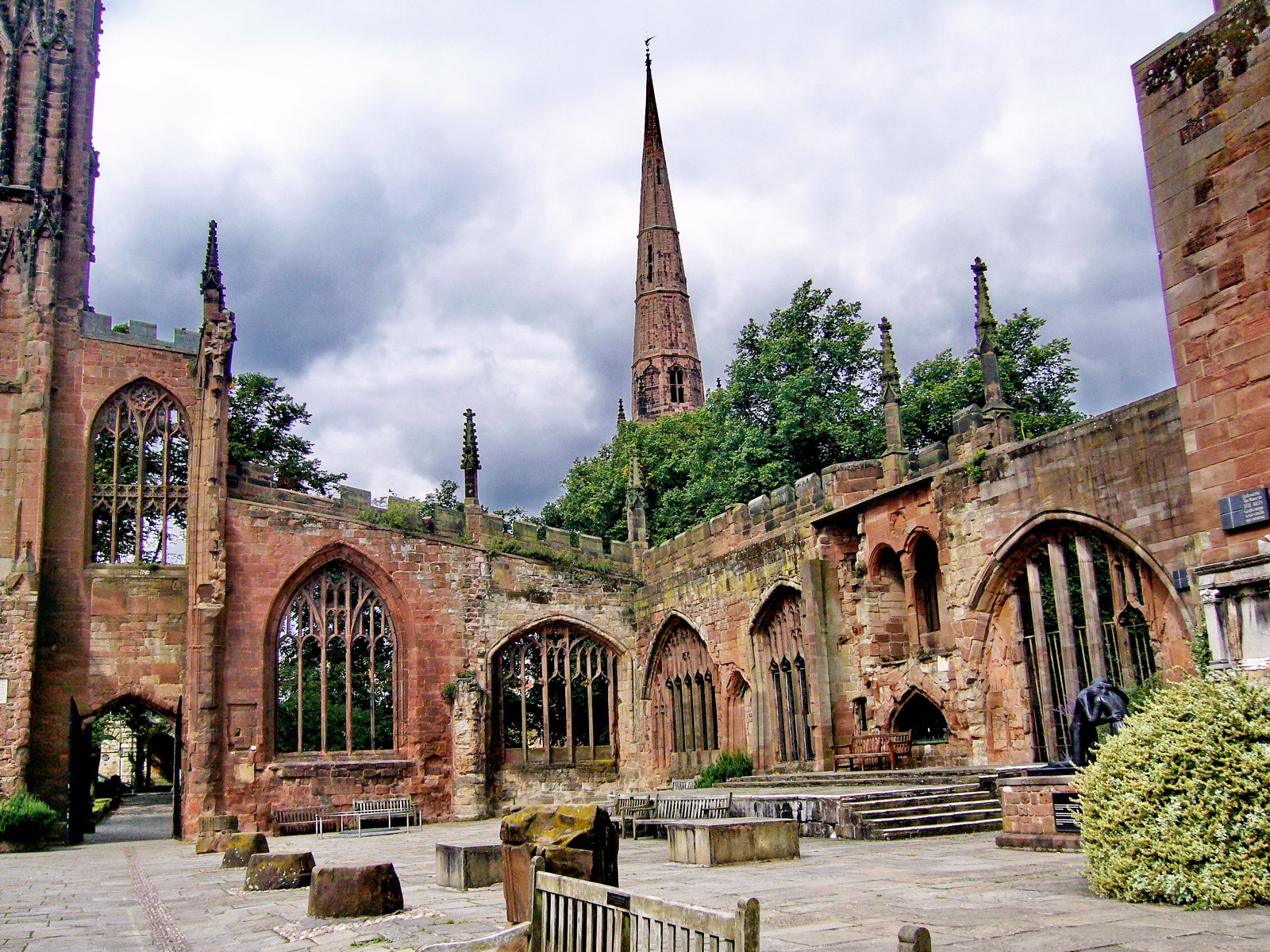 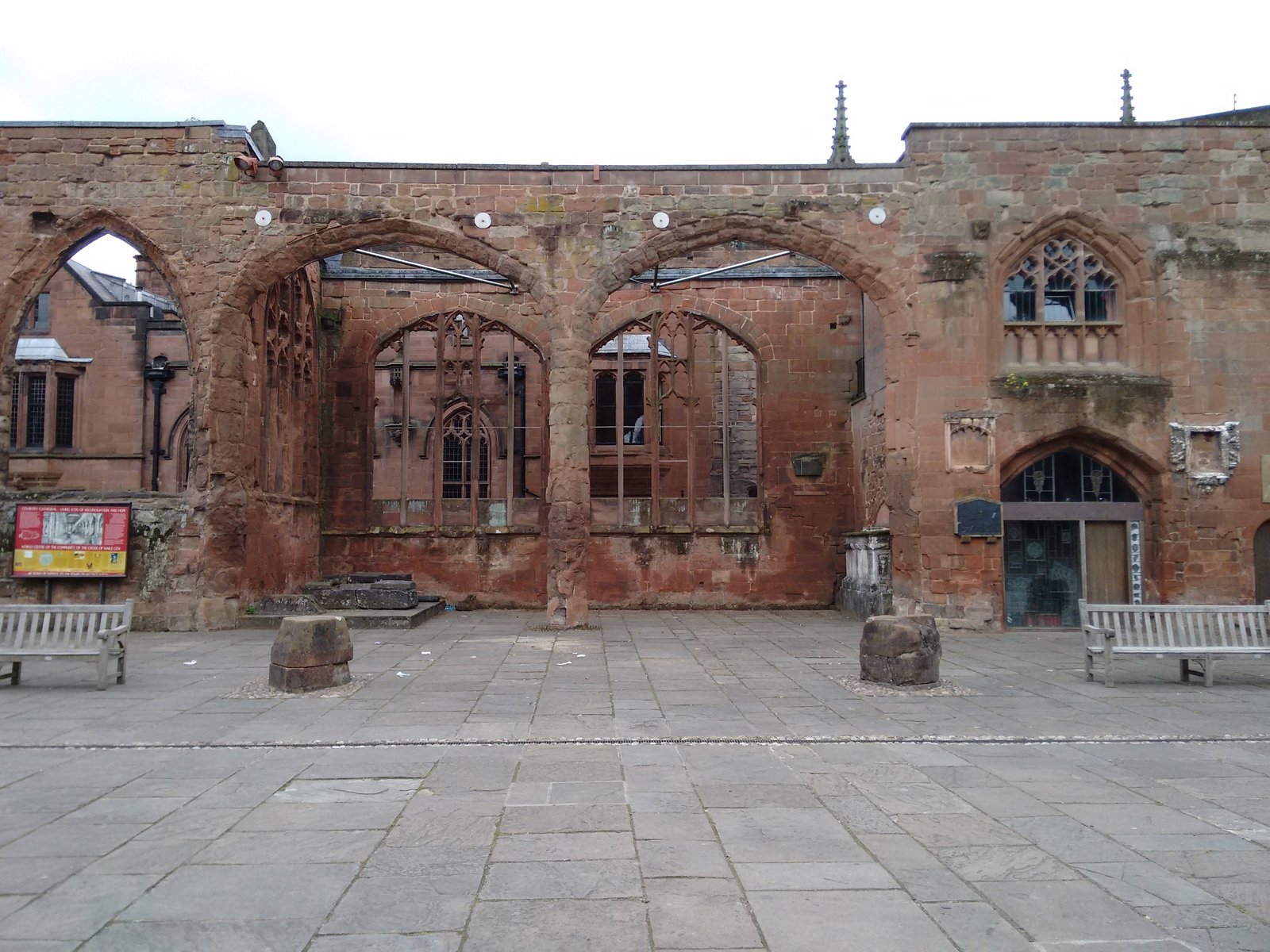 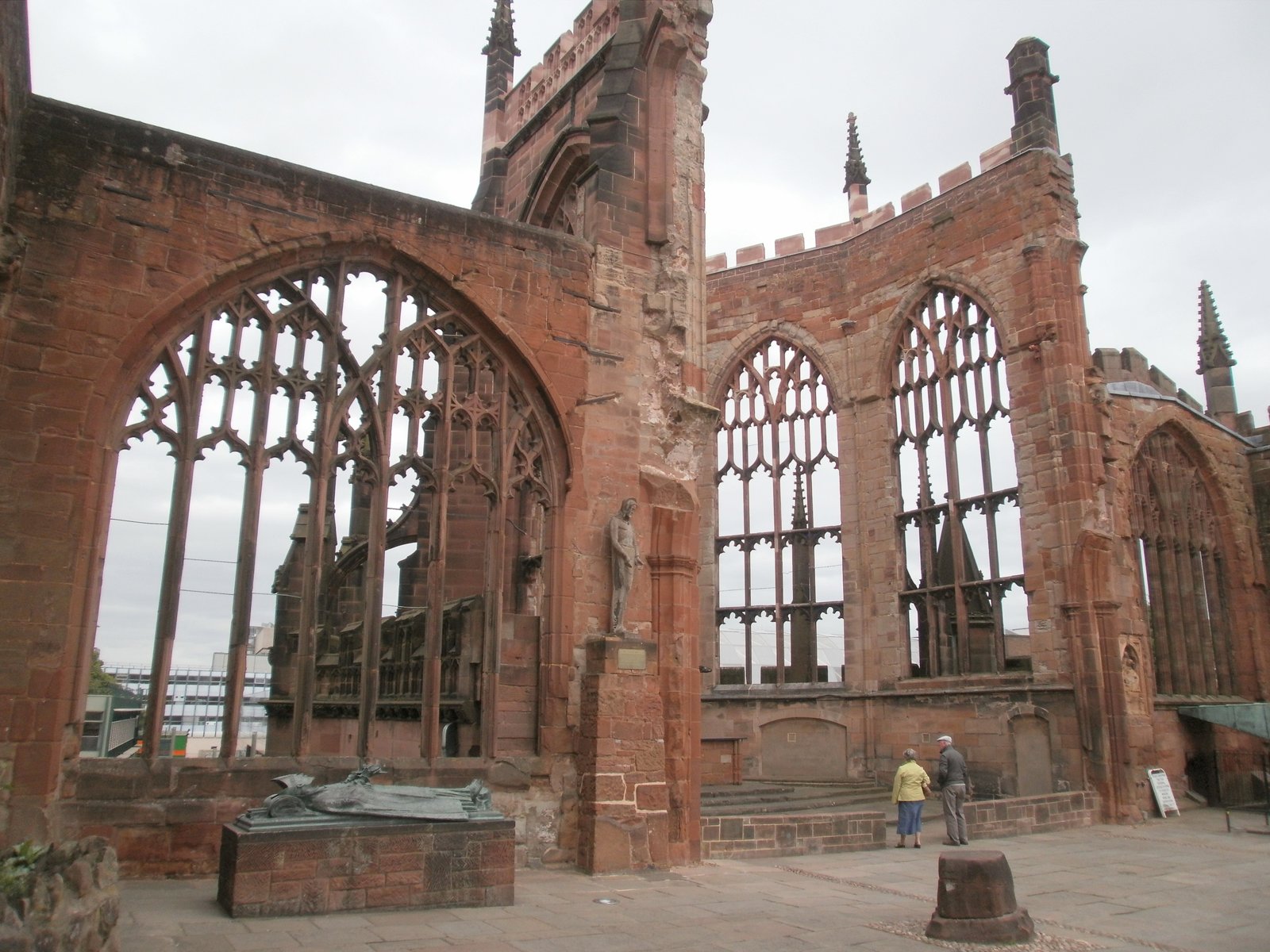 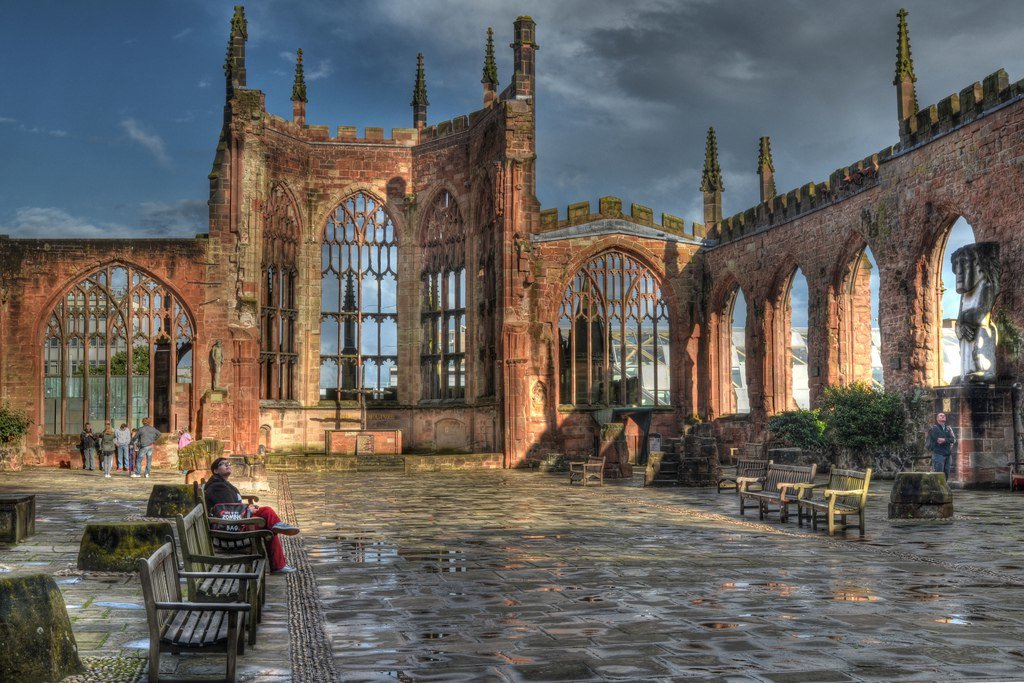 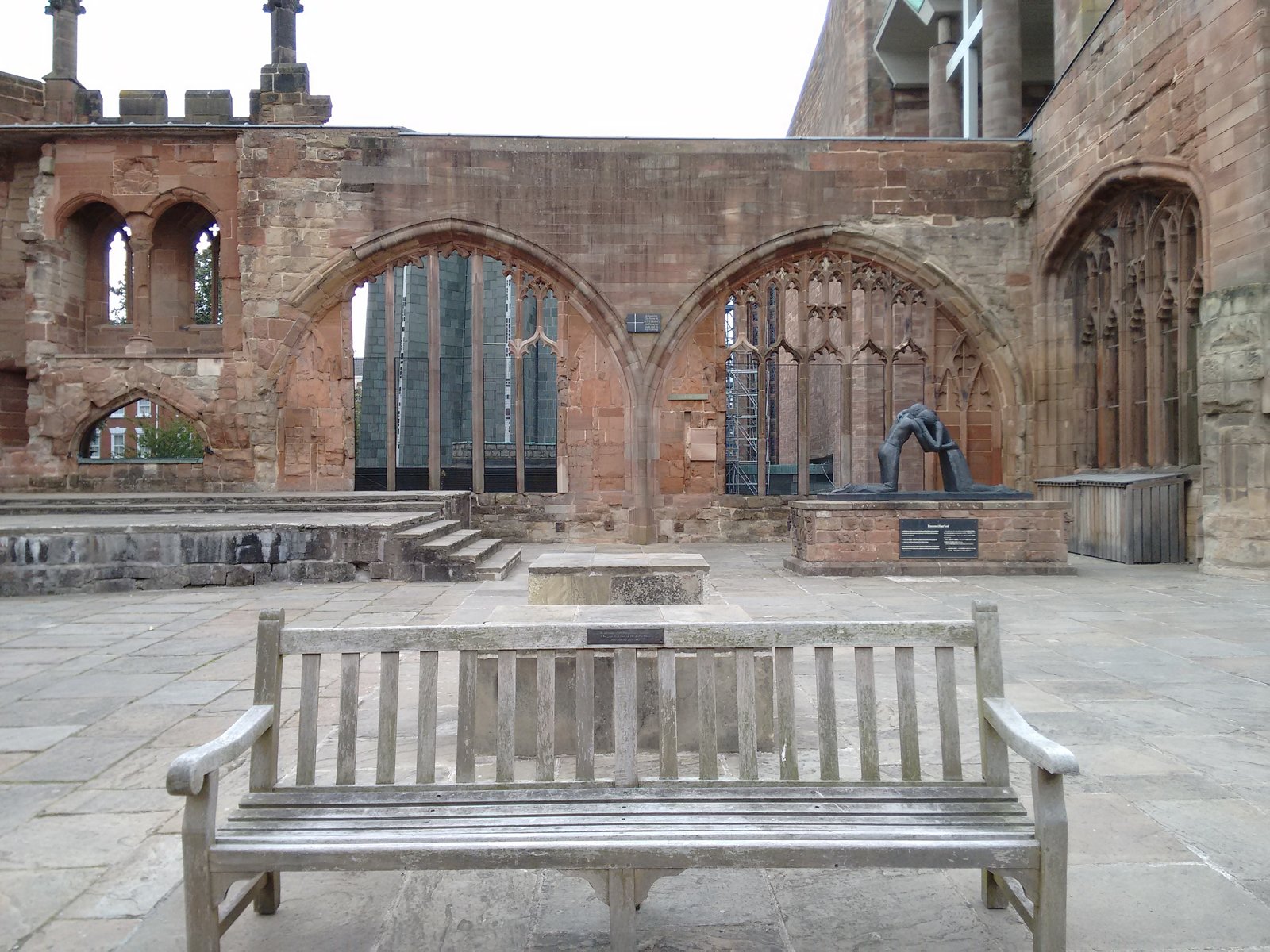 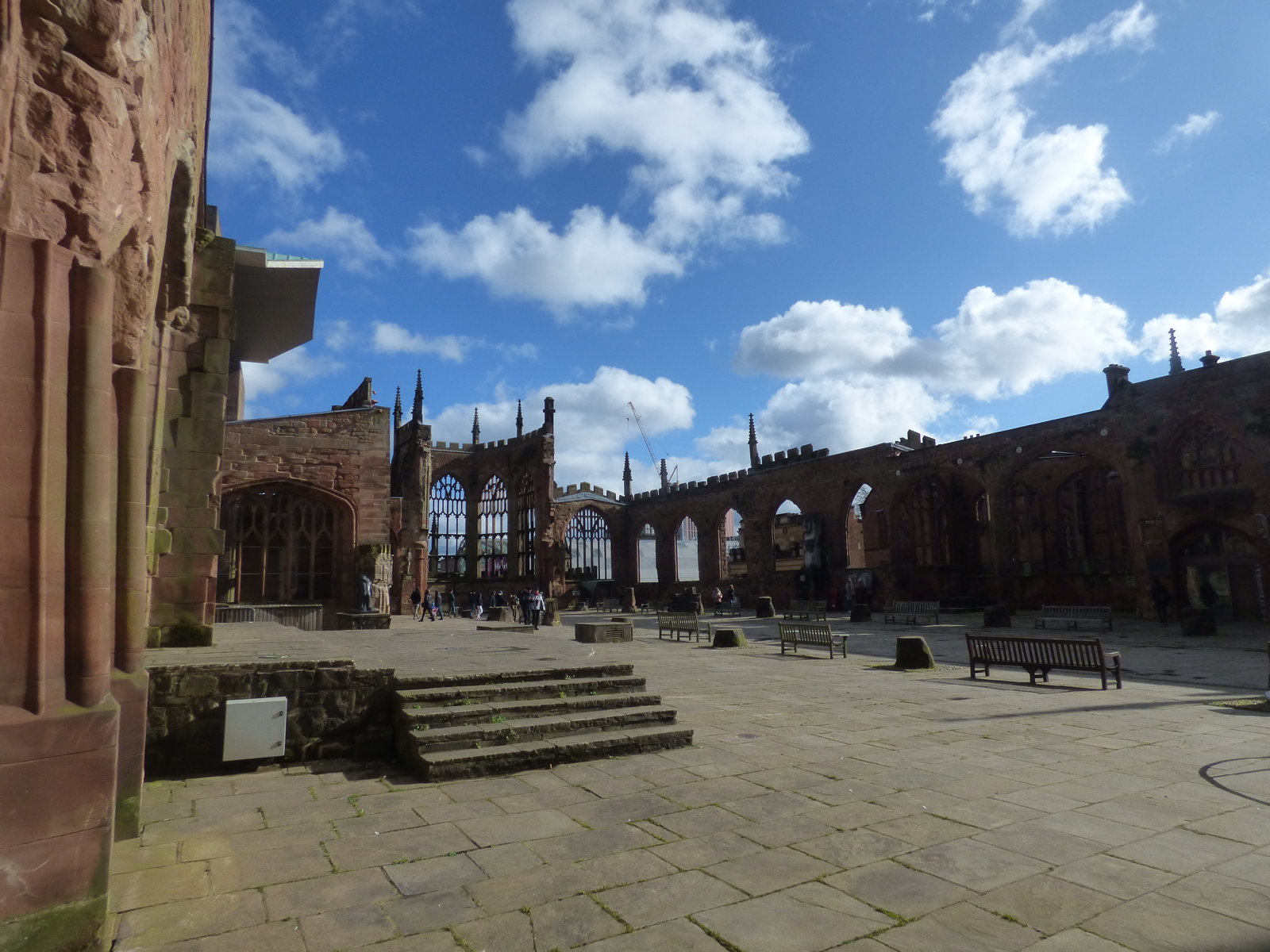 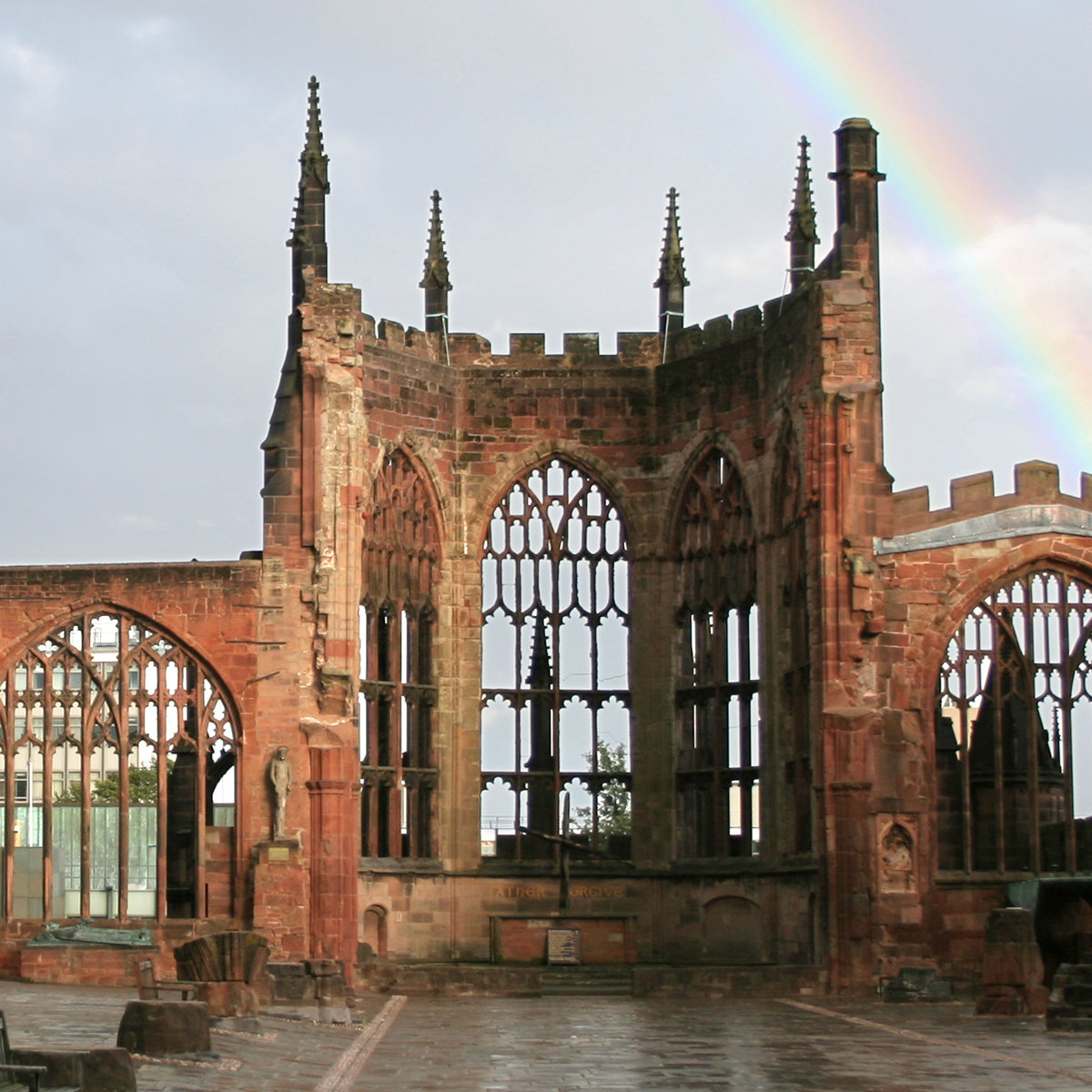 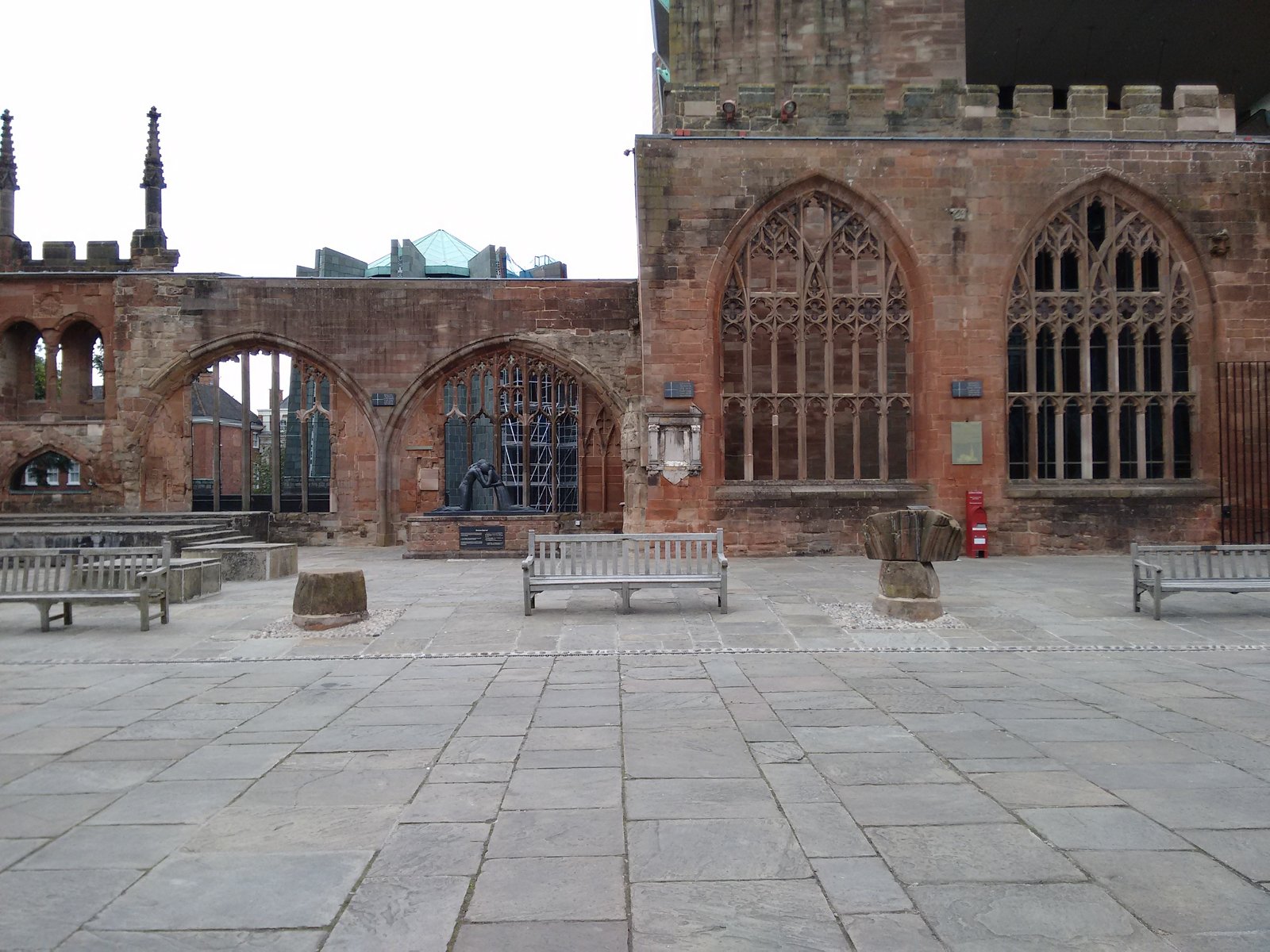 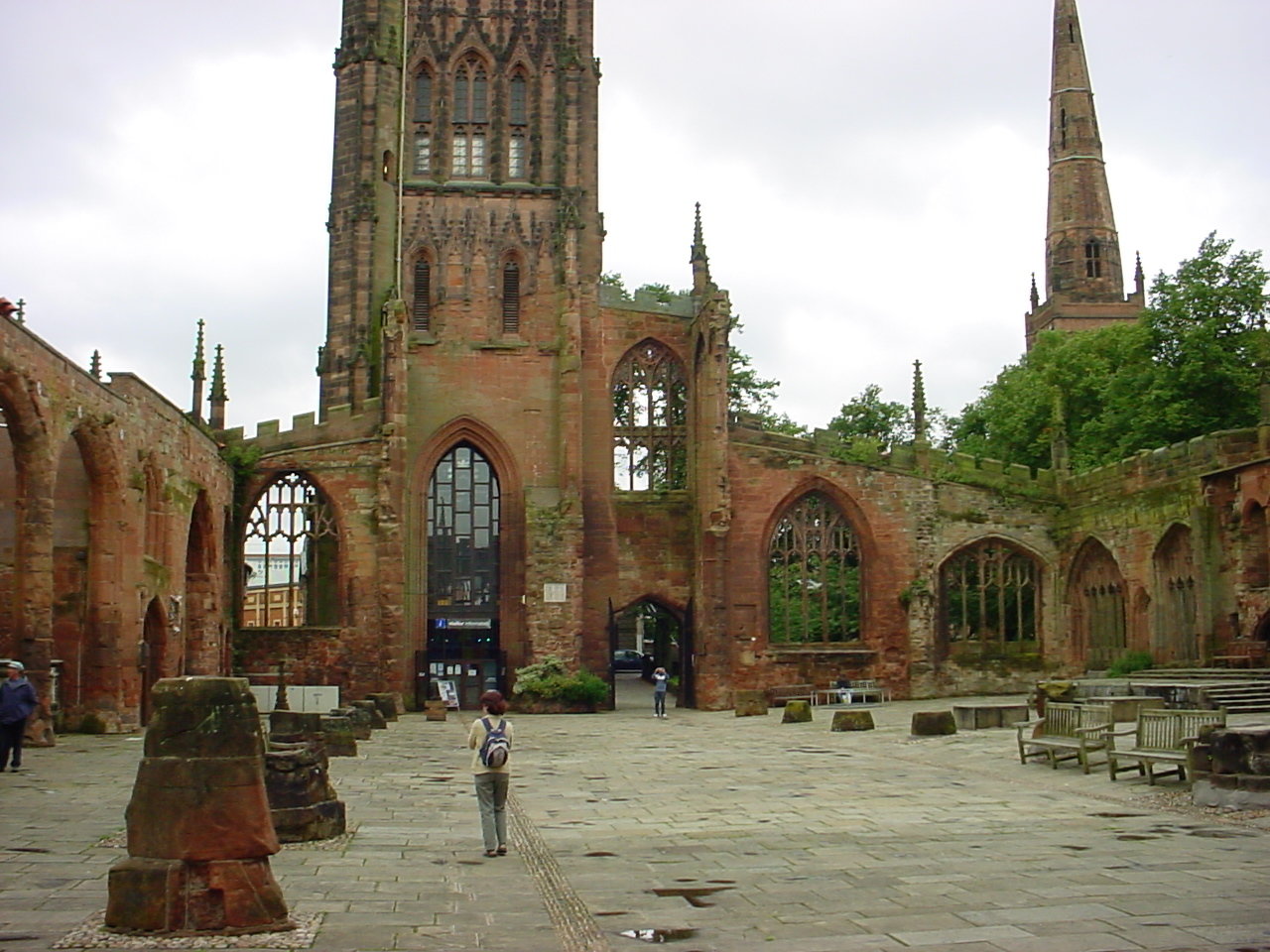 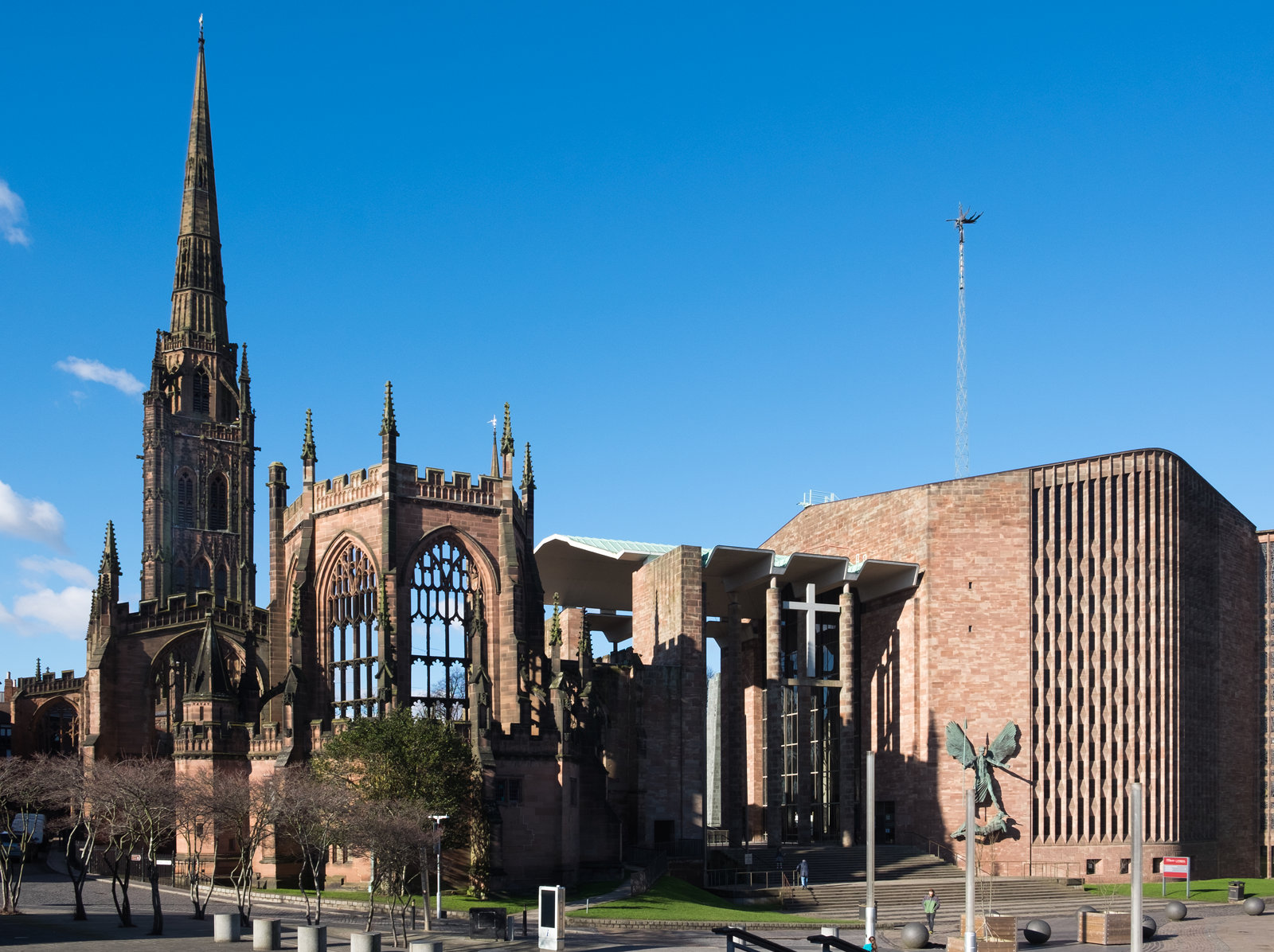 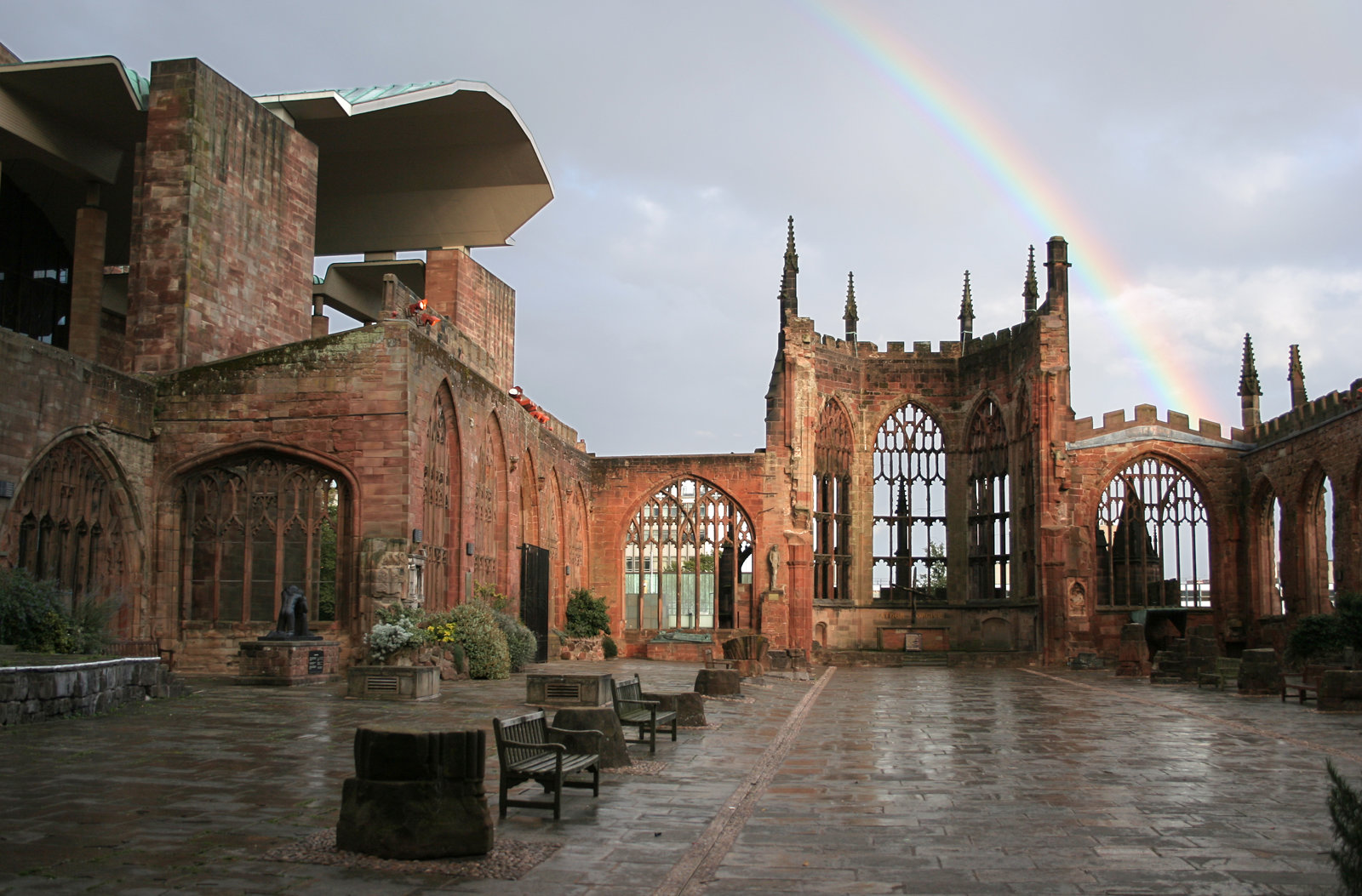 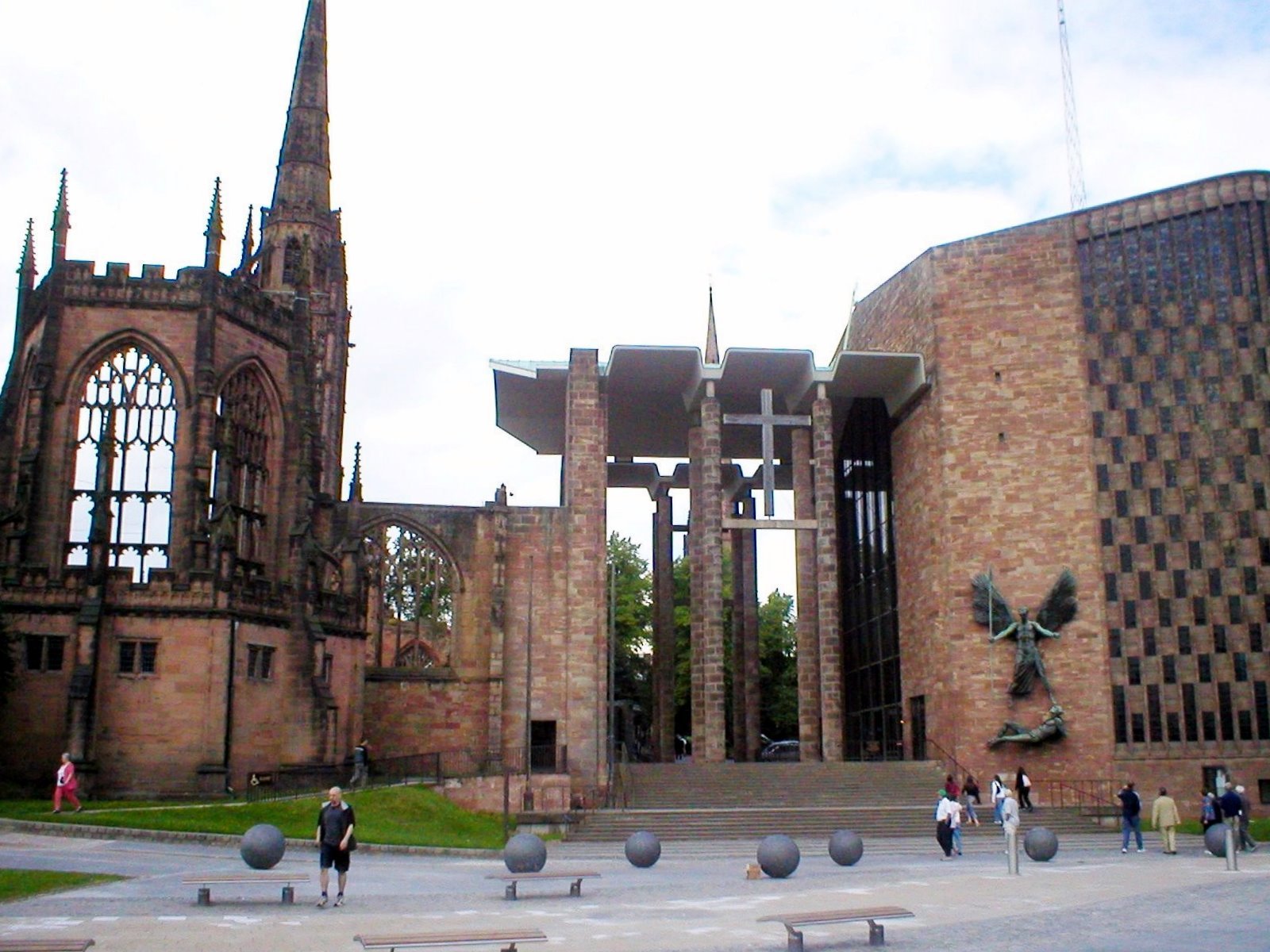 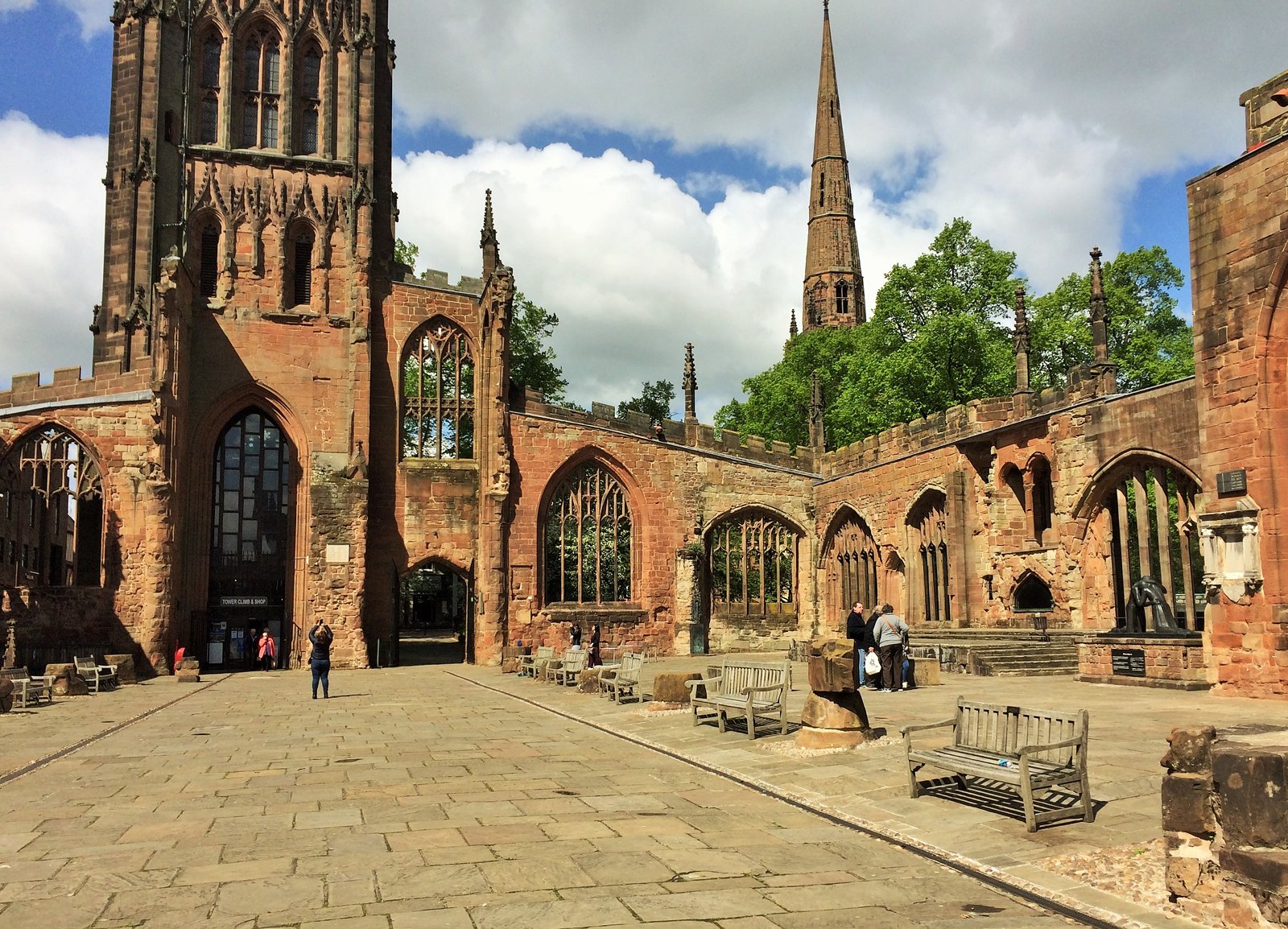 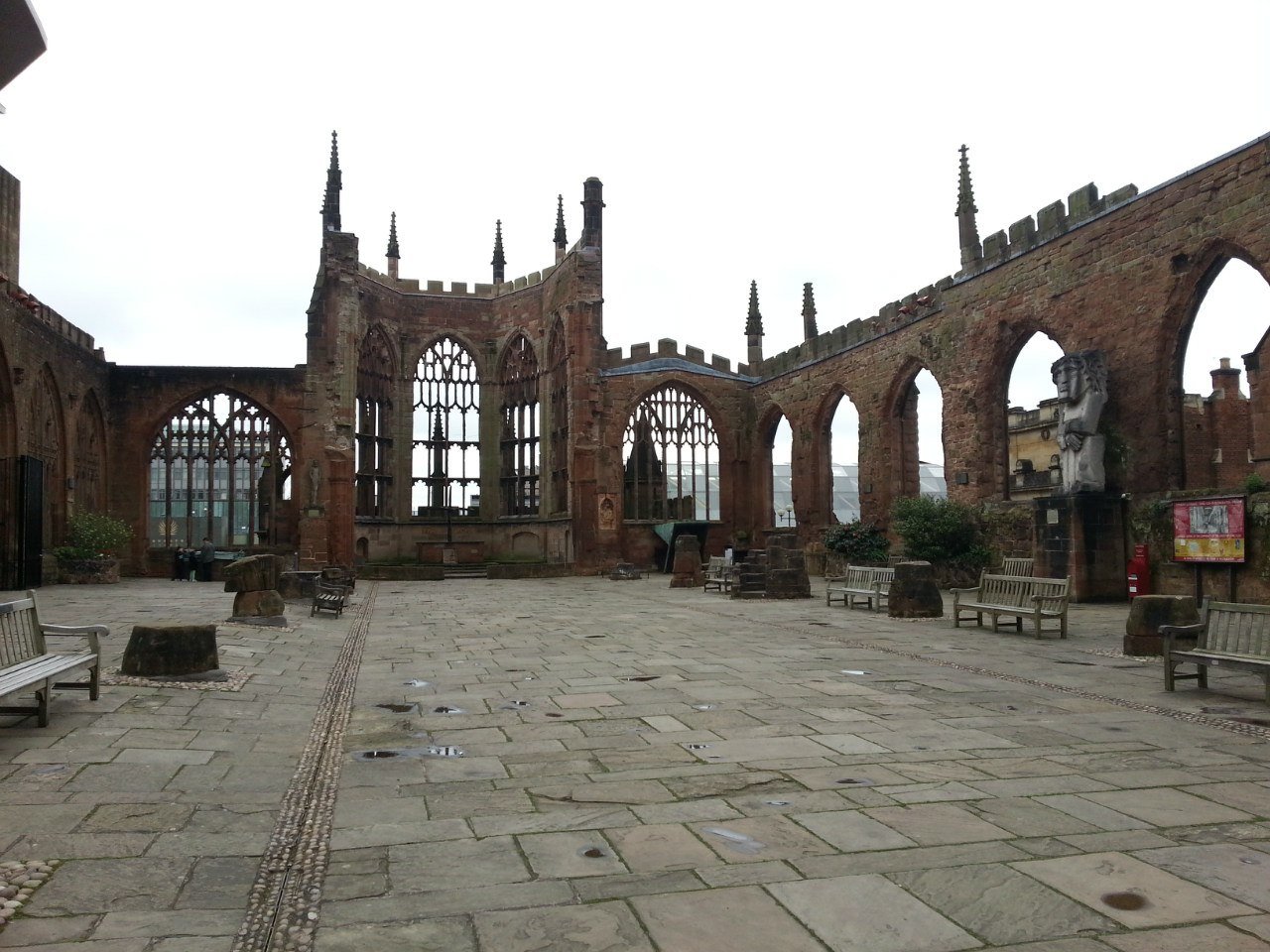 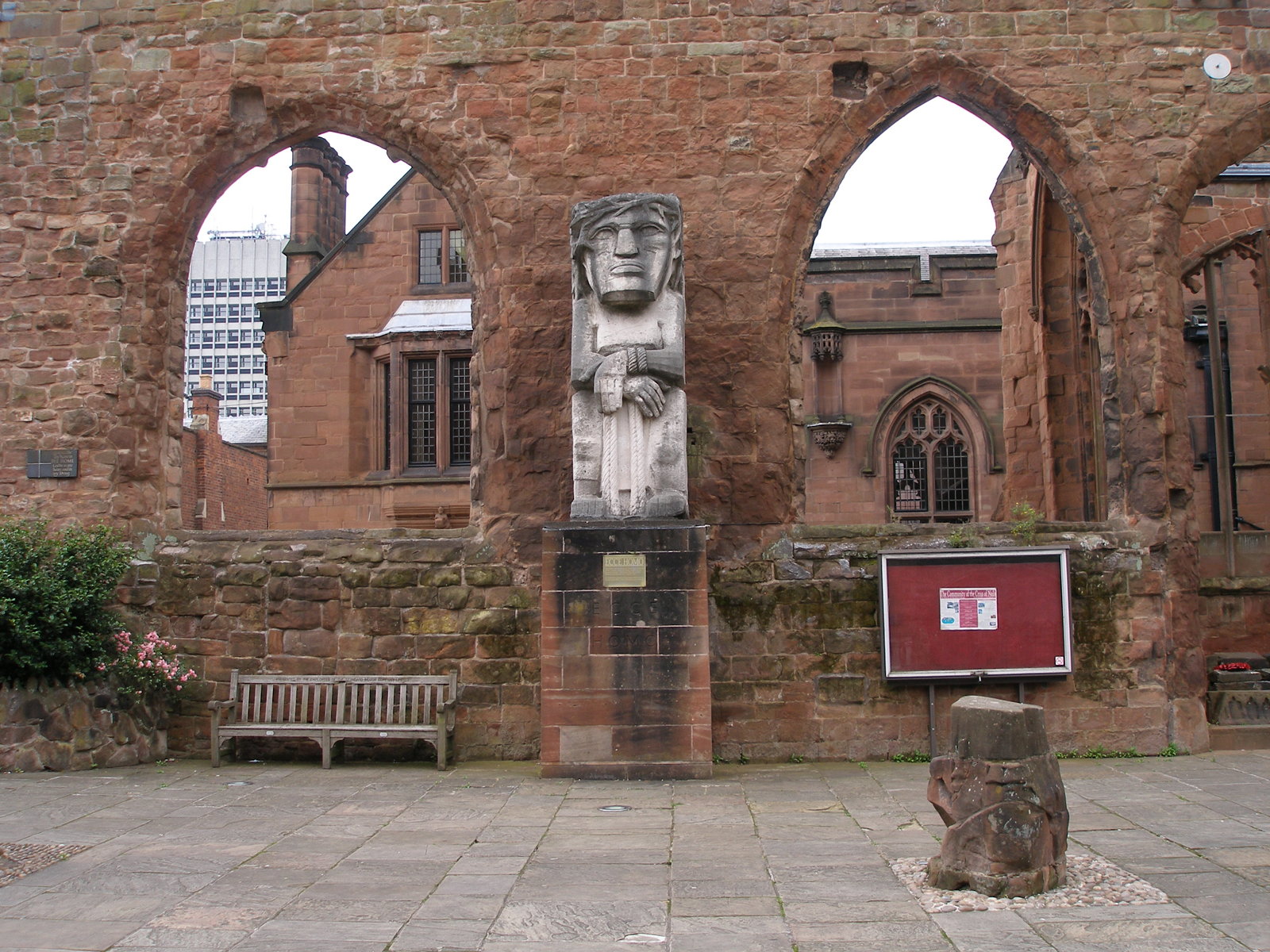 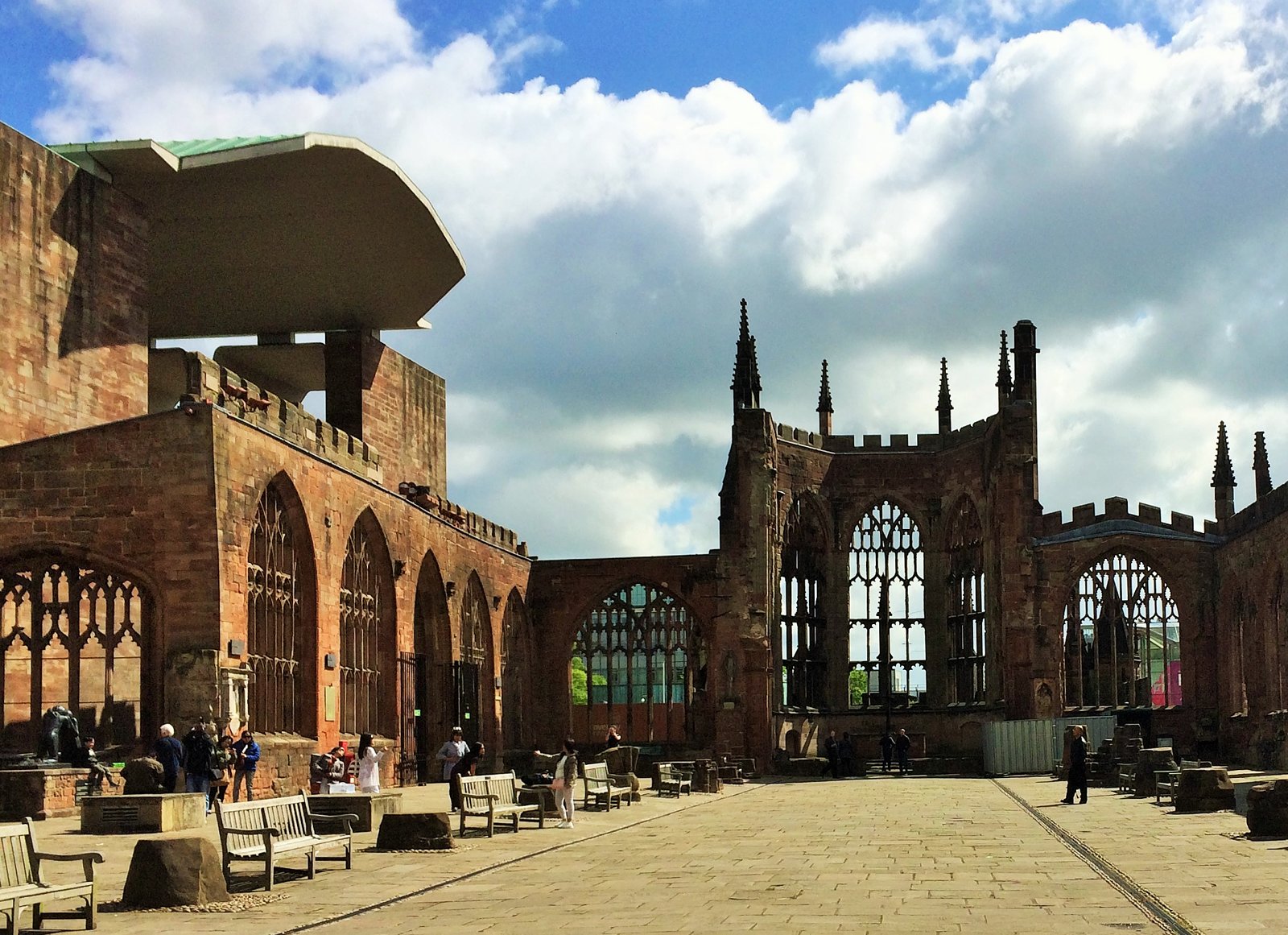