×
What are you looking for?
See all results
Castles in Aleppo 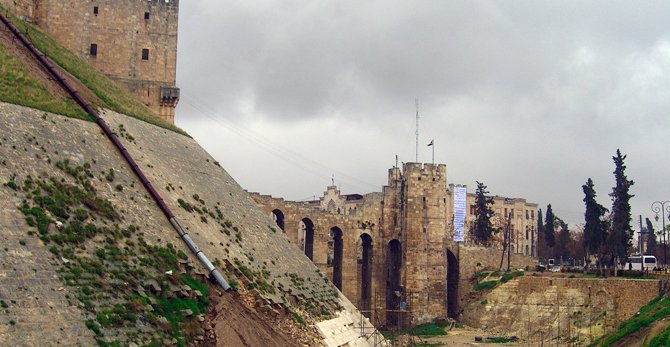 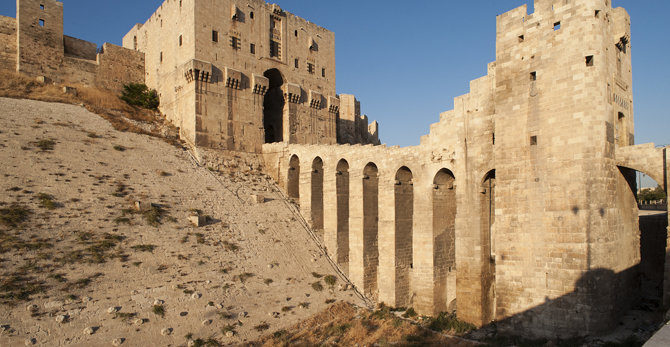 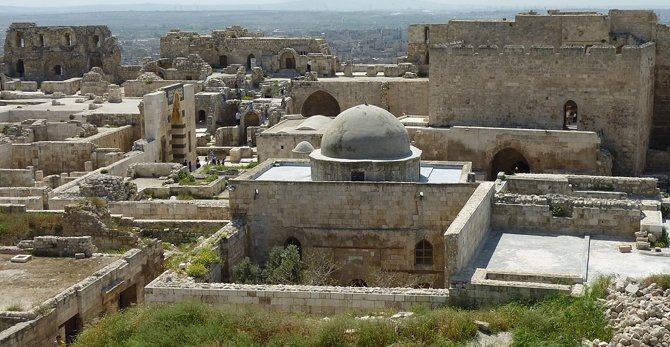 The Citadel of Aleppo (العربية. قلعة حلب) is a large medieval fortified palace in the centre of the old city of Aleppo, northern Syria. It is considered to be one of the oldest and largest castles in the world. Usage of the Citadel hill dates back at least to the middle of the 3rd millennium BC. Subsequently occupied by many civilizations including the Greeks, Byzantines, Ayyubids and Mamluks, the majority of the construction as it stands today is thought to originate from the Ayyubid period. A great deal of conservation work has taken place in the 2000s by the Aga Khan Trust for Culture in collaboration with the Syrian Directorate General of Antiquities.

The recently-discovered Temple of the Ancient Storm God, Hadad, dates use of the hill to the middle of the 3rd millennium BC, and it is referred to in Cuniform texts from Ebla and Mari refer to the temple. The prophet Abraham is said to have milked his sheep on the citadel hill. After the decline of the Neo-Hittite state centred in Aleppo, the Assyrians dominated the area (4-8th century BC), followed by the Neo-Babylonians and the Persians (539-333).

After Aleppo was taken by the armies of Alexander the Great, Aleppo was ruled by Seleucus I Nicator, who undertook the revival of the city under the name Beroia. Medieval Arab historians say that the history of the citadel as a fortified acropolis began under Nikator. In some areas of the citadel there are up to two meters of remains of Hellenistic settlement. A colonnaded street led up to the citadel hill from the west, where the souk area of Aleppo still retains the Hellenistic grid street plan.

After the Romans deposed the Greeks in 64 BC, the citadel hill continued to have religious significance. Emperor Julian, in his 363 AD visit to Aleppo noted “I stayed there for a day, visited the acropolis, offered a white bull to Zeus according to imperial customs, and held a short talk with the town council about worshipping the gods.” Very few physical remains have been found from the Roman age in the Citadel.

The Roman Empire was divided into two parts in 395. Aleppo was in the eastern half, Byzantium. During the clashes with the Sassanian king Chosroes II in the 7th century, the population of Aleppo is said to have taken refuge in the Citadel because the city wall was in a deplorable state . Currently, very few remains from the Byzantine period have been found on the Citadel Hill. The two mosques inside the Citadel are known to be converted from churches originally built by the Byzantines.

Muslim troops captured Aleppo in 636 AD. Written sources document repairs being made on the citadel after a major earthquake. Little is known about the citadel in the period of early Islam, except that Aleppo was a frontier town on the edges of the Ummayad and Abbasid empires.

Sayf al-Daula, a Hamdanid prince, conquered the city in 944, and it subsequently rose to a political and economic renaissance. The Hamdanids built a reputedly splendid palace on the banks of the river, but moved to the Citadel after Byzantine troops attacked in 962. A period of instability followed the Hamdanid rule, marked by Byzantine and Beduin attacks, a short-term rule by the Egyptian-based Fatimids. The Mirdasids were said to have converted the two churches into mosques.

The citadel rose to the peak of its importance in the period during and after the Crusader presence in the Near East. Zengid ruler Imad ad-Din Zengi, followed by his son Nur al-Din (ruled 1147–1174) successfully unified Aleppo and Damascus and held back the Crusaders from their repeated assaults on the cities. Several famous crusaders were imprisoned in the citadel, among them Count of Edessa, Joscelin II, who died there, Reynald of Chatillon, and the King of Jerusalem, Baldwin II, who was held for two years. In addition to his many works in both Aleppo and Damascus, Nur ad-Din rebuilt the Aleppo city walls and fortified the citadel. Arab sources report that he also made several other improvements, such as a high, brick-walled entrance ramp, a palace, and a racecourse likely covered with grass. Nur ad-Din additionally restored or rebuilt the two mosque and donated an elaborate wooden mihrab (prayer niche) to the Mosque of Abraham. The mihrab disappeared during the French Mandate.

Saladin's son al-Zahir al-Ghazi ruled Aleppo between 1193 and 1215. During this time the citadel went through major reconstruction, fortification and addition of new structures that create the complex of the Citadel in its current form today. Sultan Ghazi strengthened the walls, smoothed the surface of the outcrop and, most importantly, covered sections of the slope at the entrance area with stone cladding. The depth of the moat was increased, connected with water canals and spanned by a tall bridge-cum-viaduct, which today still serves as the entrance into the Citadel. During the first decade of the thirteenth century the citadel evolved into a palatial city that included functions ranging from residential (palaces and baths), religious (mosque and shrines), military installations (arsenal, training ground defence towers and the entrance block) and supporting elements (water cisterns and granaries). The most prominent renovation is the entrance block rebuilt in 1213. Sultan Ghazi also had the two mosques on the Citadel restored, and expanded the city walls to include the southern and eastern suburbs, making the citadel the centre of the fortifications, rather than alongside the wall.

In 1415 the Mamluk governor of Aleppo, prince Sayf al-Din Jakam, was authorized to rebuild the citadel, which by then stood at the centre of a significant trading city of between 50-100,000 inhabitants. Sayf al-Din’s most important additions were two new advance towers on the north and south slopes of the citadel, and the new Mamluk palace built on top of the higher of the two entrance towers. The Ayyubid palace was almost completely abandoned during this period. The Mamluk period also administered restoration and preservation projects on the Citadel. The final Mamluk sultan, Al-Ashraf Qansuh al-Ghuri, replaced the flat ceiling of the Throne Hall with 9 domes.

During the Ottoman period, the military role of the citadel as a defense fortress slowly diminished as the city began to grow outside the city walls and was taking its form as a commercial metropolis. The Citadel was still used as a barracks for Ottoman soldiers, although it is not known exactly how many were stationed there. An anonymous Venetian traveler mentions some 2000 people living in the Citadel in 1556. In 1679, the French consul d’Arvieux reports 1400 people there, 350 of whom were Janissaries, the elite military corps in the service of the Ottoman Empire. Sultan Süleyman restored the citadel in 1521.

Soldiers continued to be stationed in the citadel during the French Mandate (1920-45). The French began archaeological excavations and extensive restoration work in the 1930s, particularly on the perimeter wall. The Mamluk Throne Hall was also completely restored during this time and given a new flat roof decorated in 19th-century Damascene style. A modern amphitheater was constructed on a section of an unexcavated surface of the citadel in 1980 to hold events and concerts.

The Citadel in its present form today, is situated on a mound which has an elliptical base with a length of 450m and width of 325m. At the top this ellipse measures 285m by 160m with the height of this slanting foundation measuring 50m. In the past, the entire mound was covered with large blocks of gleaming limestone, some of which still remain today. The mound is surrounded by a 22m-deep and 30m-wide moat, dating from the 12th century. Notable is the fortified gateway, accessible though an arched bridge. This feature was an addition from the Mamluk government in the 16th century. A succession of five right-angle turns and three large gates (with carved figures) leads to the main inner castle entrance.

Particularly interesting in the interior are the Weapons' Hall, the Byzantine Hall and the Throne Hall, with a restored decorated ceiling.

Today, the citadel is an important tourist attraction and a site of archaeological digs and studies. The amphitheater is often used for musical concerts or cultural events.

Sites inside the Citadel

There are many structural remains inside the citadel crown. Some notable sites include:

The enormous stone bridge constructed by Sultan Ghazi over the moat led to an imposing entrance complex. Would-be assailants to the castle would have to take over six turns up a vaulted entrance ramp, over which were machicolations for pouring hot liquids on attackers from the mezzanine above. Secret passageways wind through the complex, and the main passages are decorated with figurative reliefs. The Ayyubid block is topped by the Mamluk ‘Throne Hall,’ a hall where Mamluk sultans entertained large audiences and held official functions.

Ghazi’s famous ‘palace of glory’ tragically burned down on his wedding night, but it was later rebuilt and today stands as one of the most important and impressive monuments in the citadel crown. The Ayyubids were not the first to build a palace on the citadel. Today, many fine architectural details remain from the Ayyubid period, including a spectacular entrance portal with muqarnas, or honeycomb vaulting, and a courtyard on the four-iwan system, with beautiful tiling. Laid out in traditional medieval Islamic style, the palace hammam has three sections. The first was used for dressing, undressing, and resting. The second was an unheated but warmer room, and this was followed by a hot room, and a steam room equipped with alcoves. Hot and cold water was piped through to the hammam with earthenware pipes.

By no means was construction in the citadel confined to above-ground. Several wells penetrate down to 125m below the surface of the crown. Underground passageways connect to the advance towers and possibly under the moat to the city.

Stefan Crisan
Someday I will visit this beautiful place 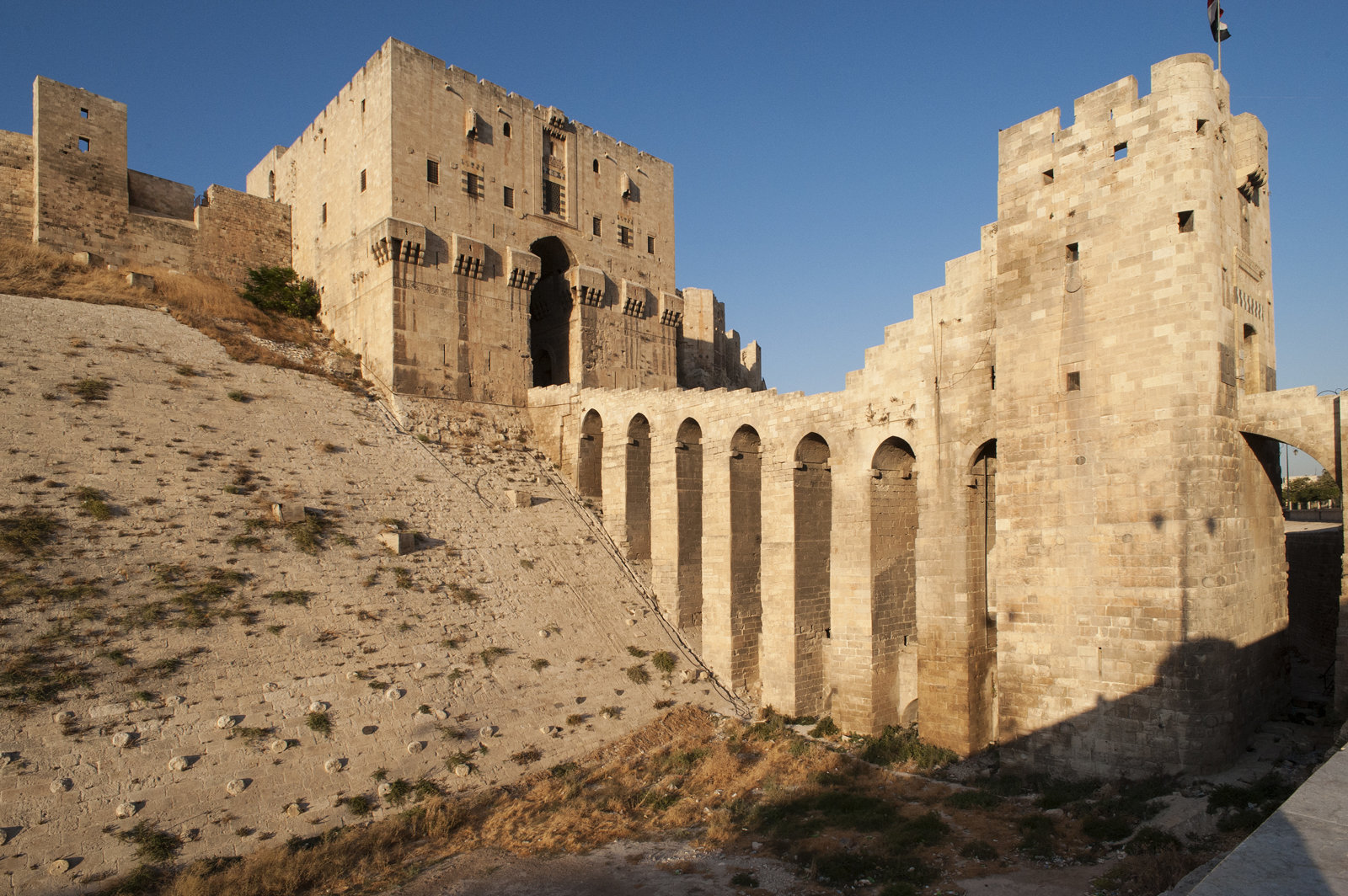 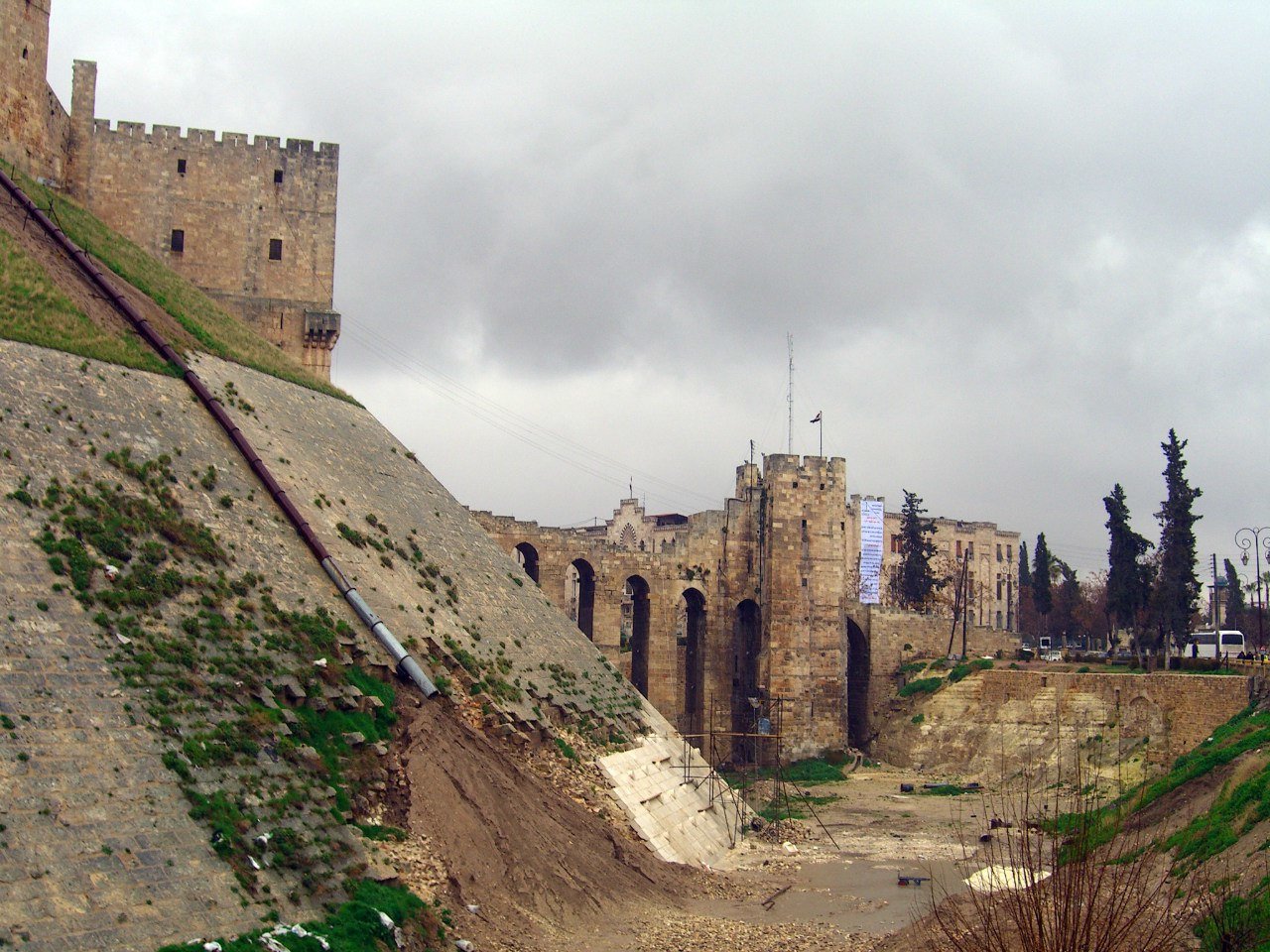 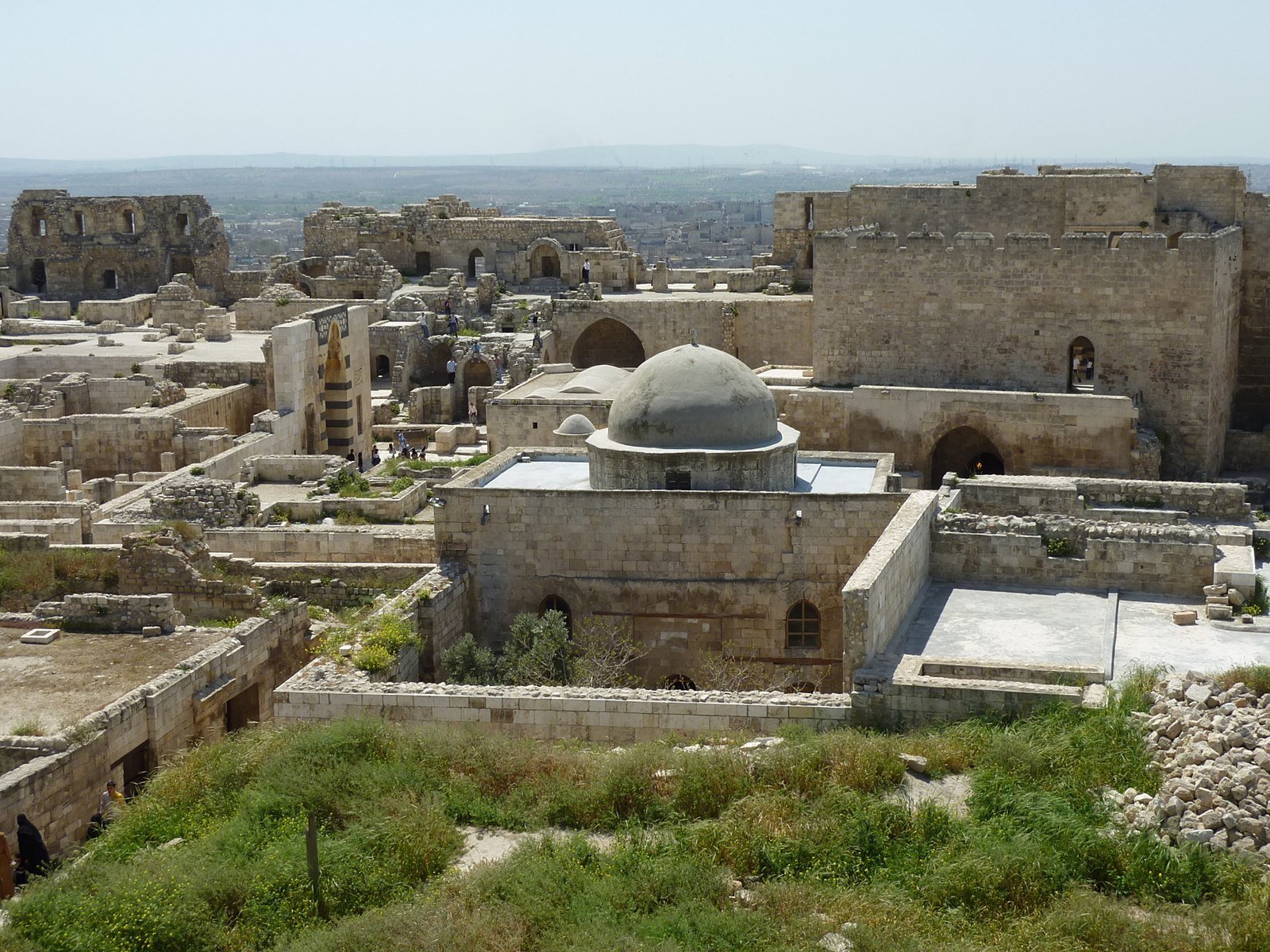 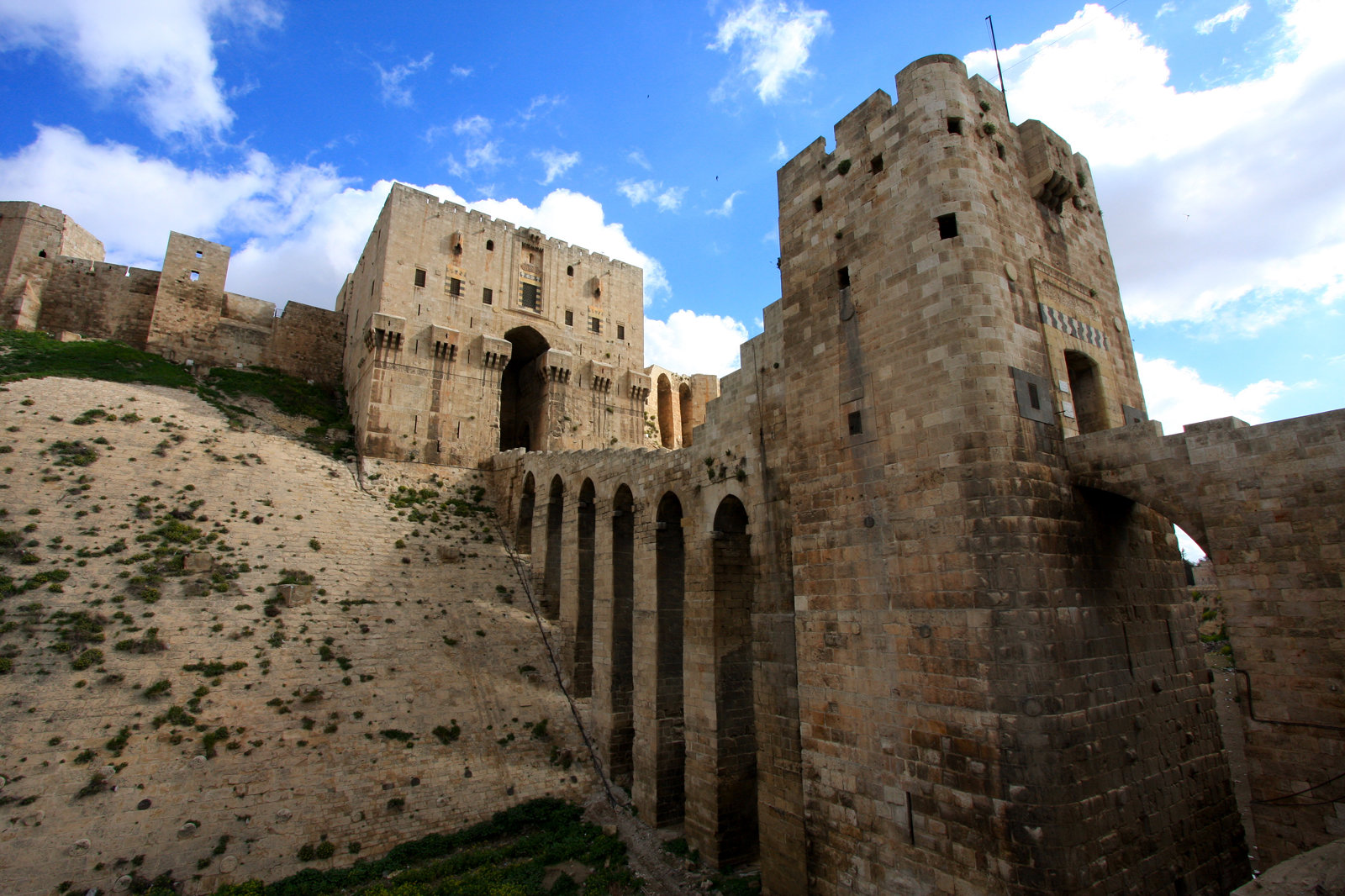 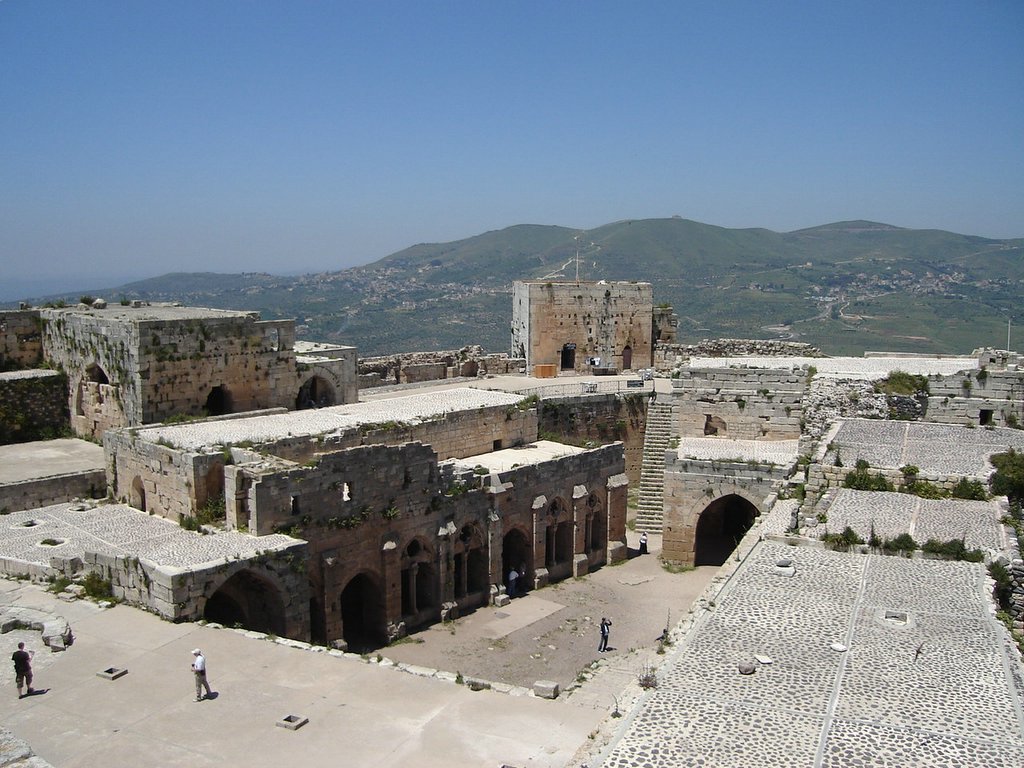 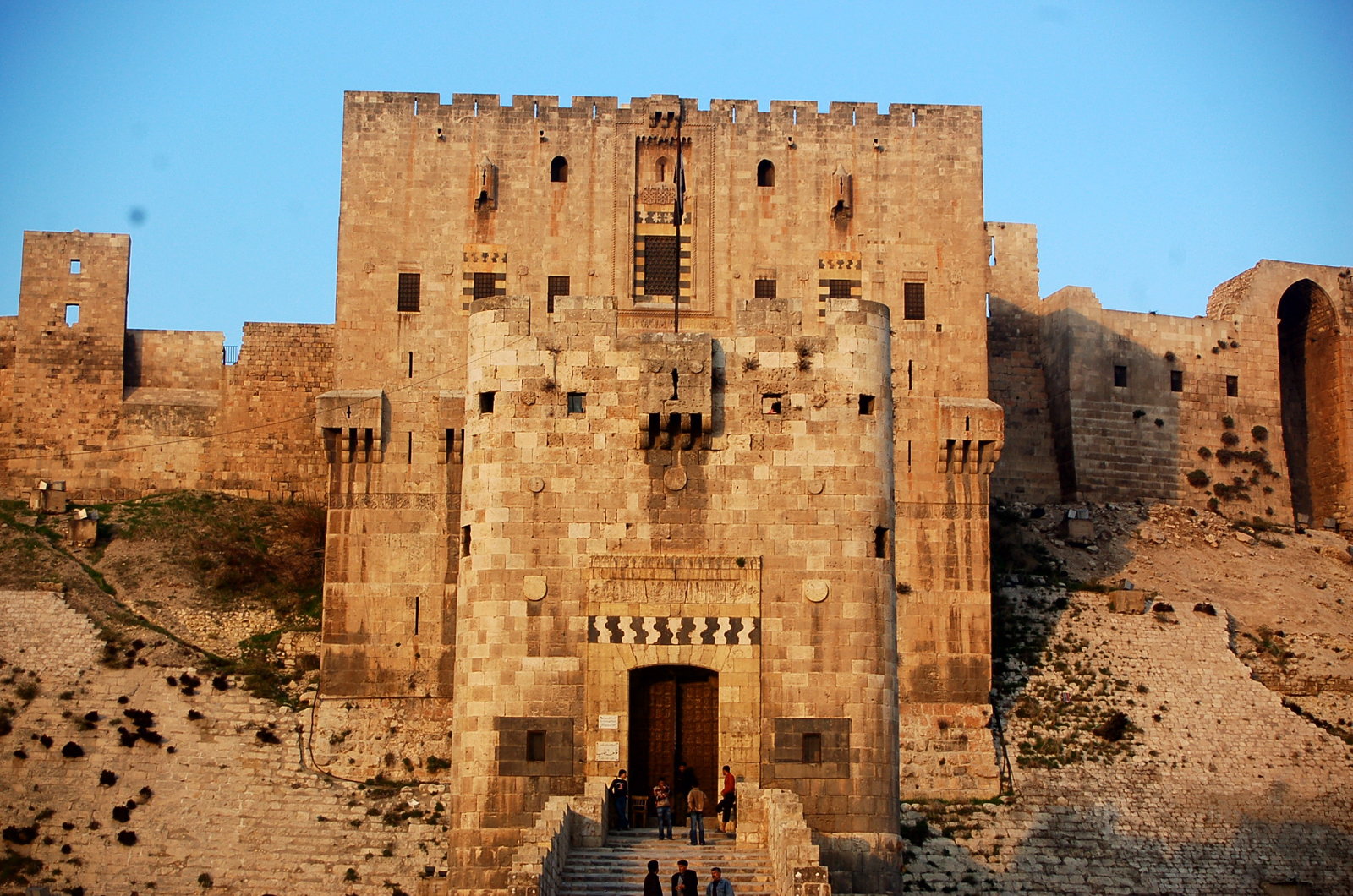 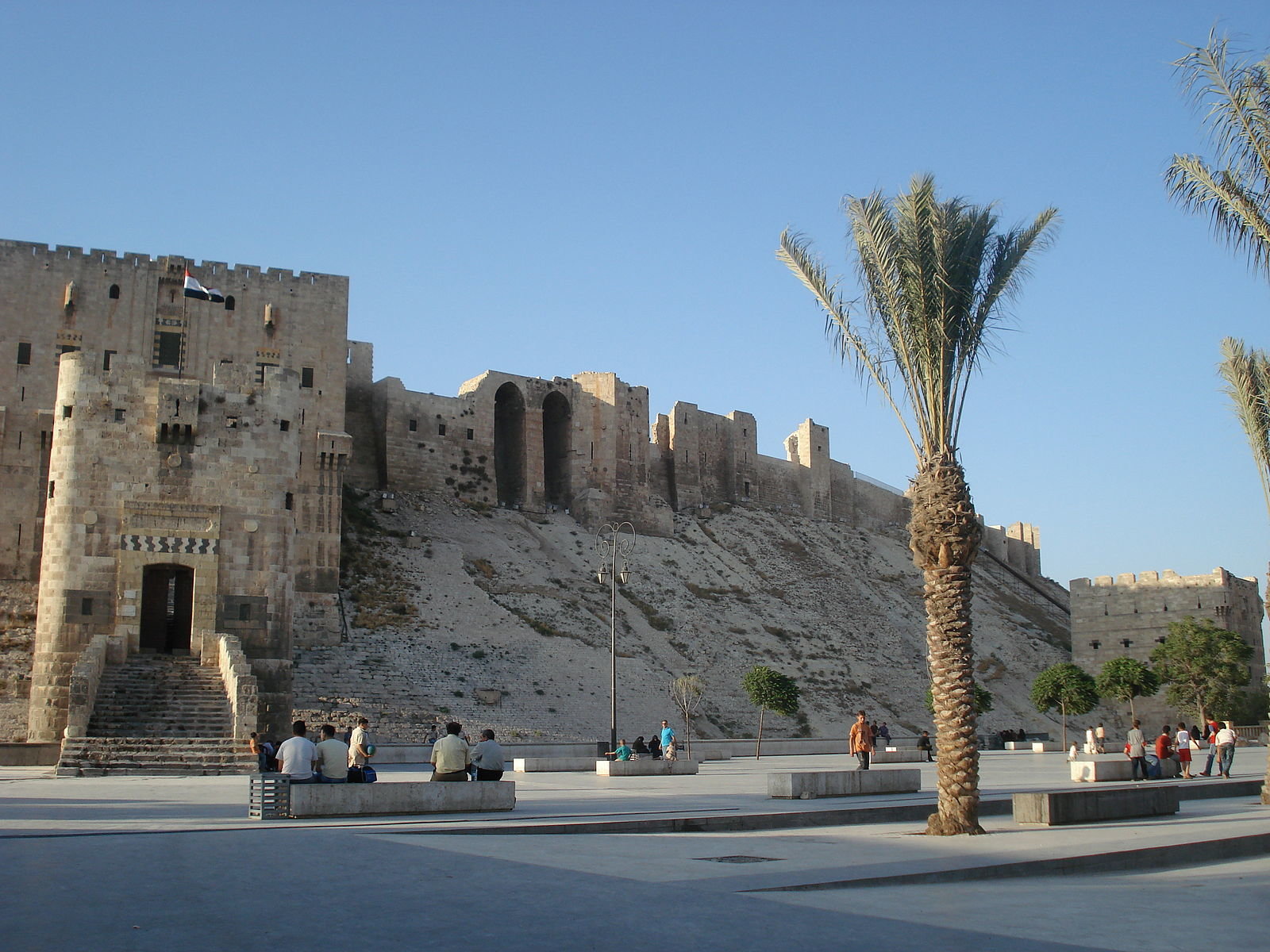 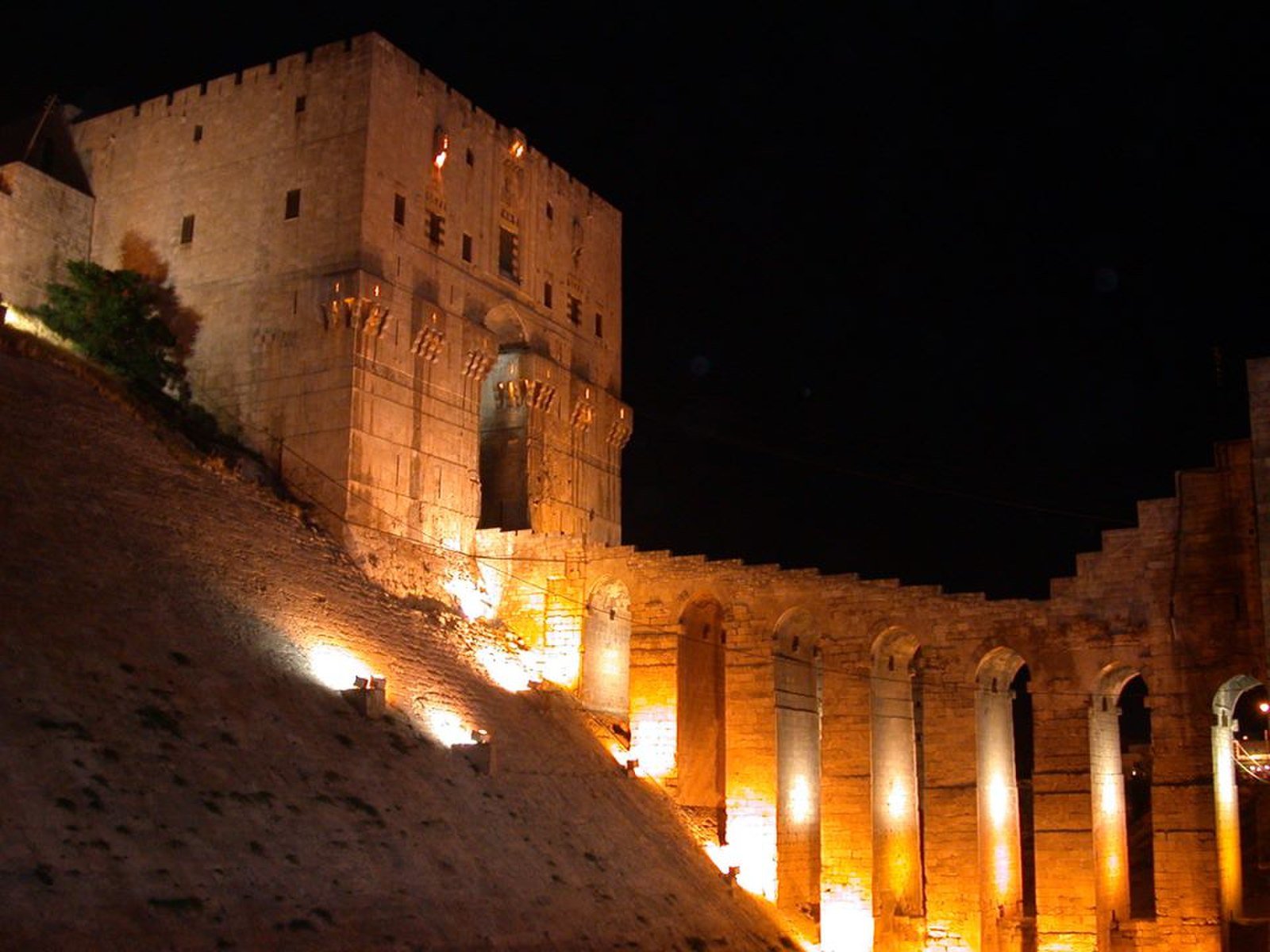 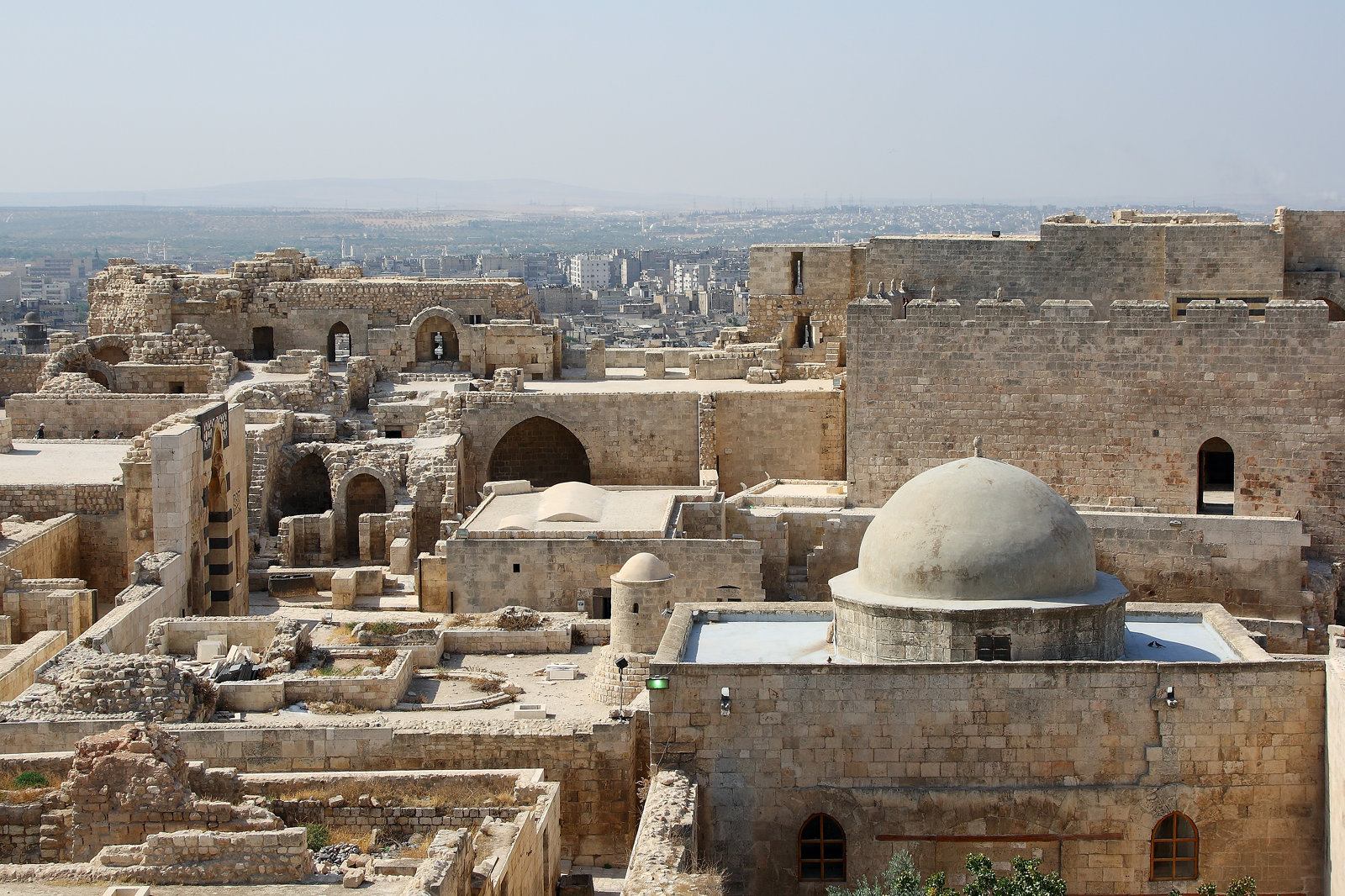 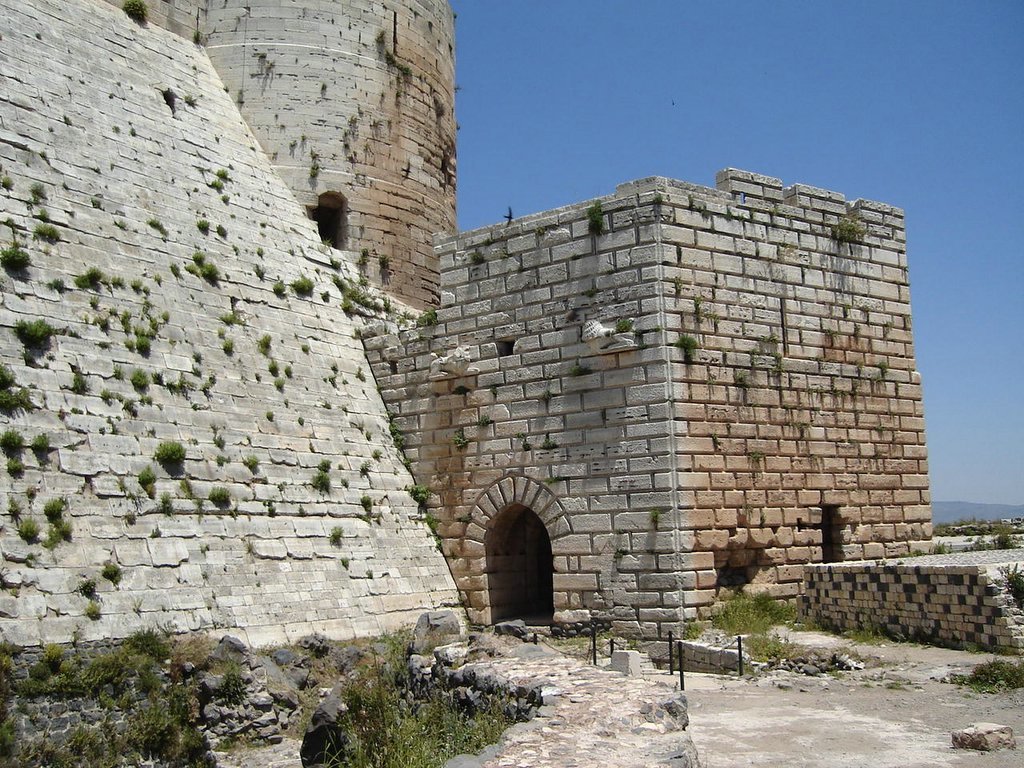 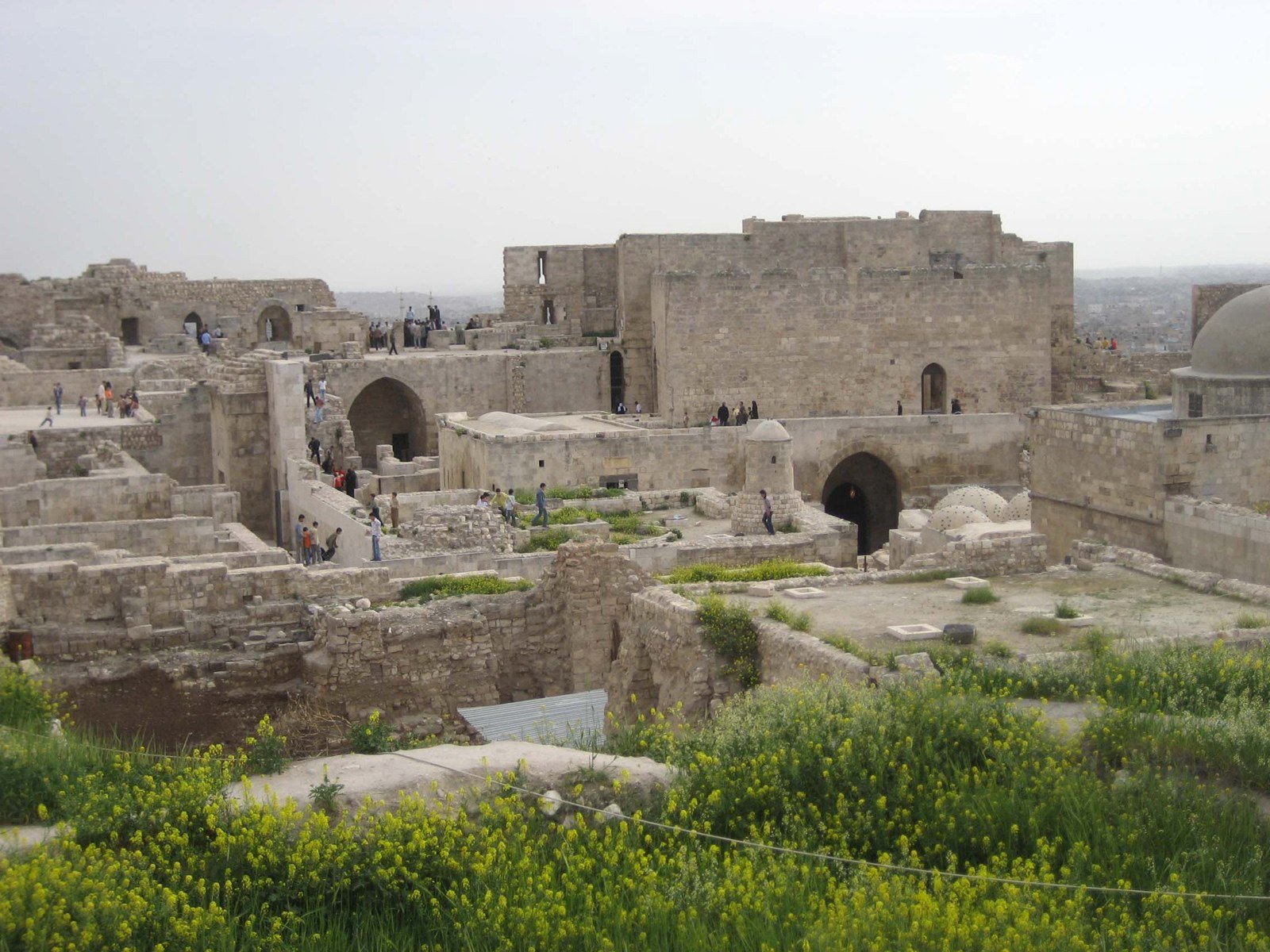 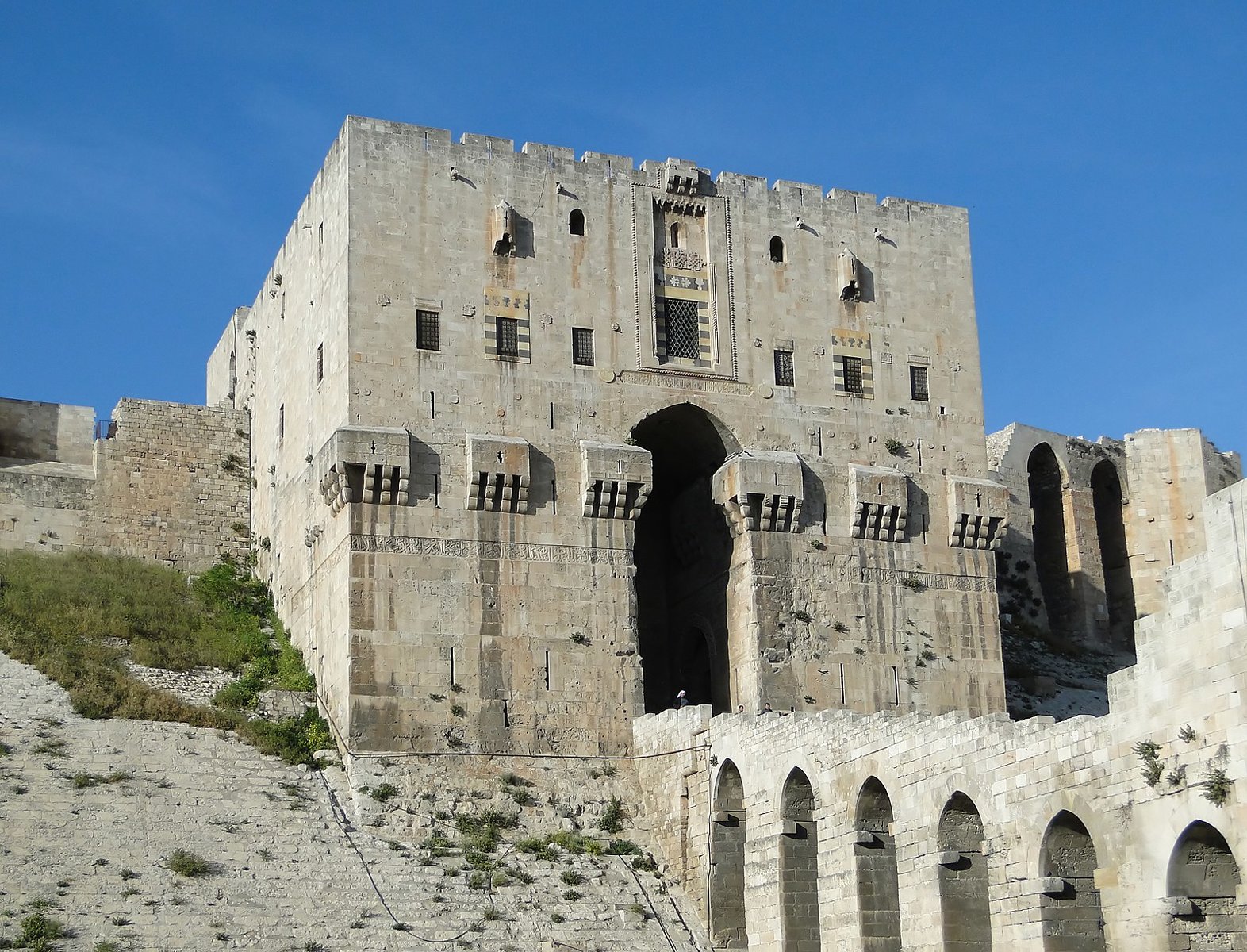 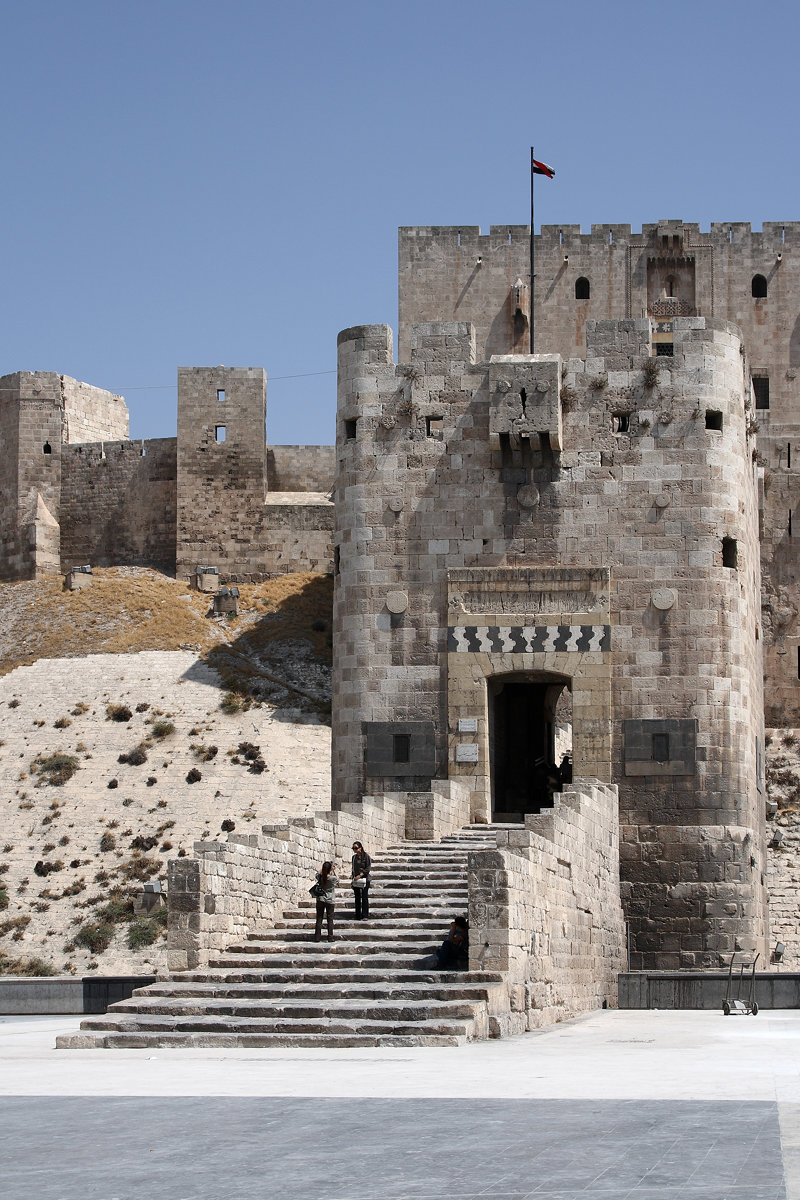 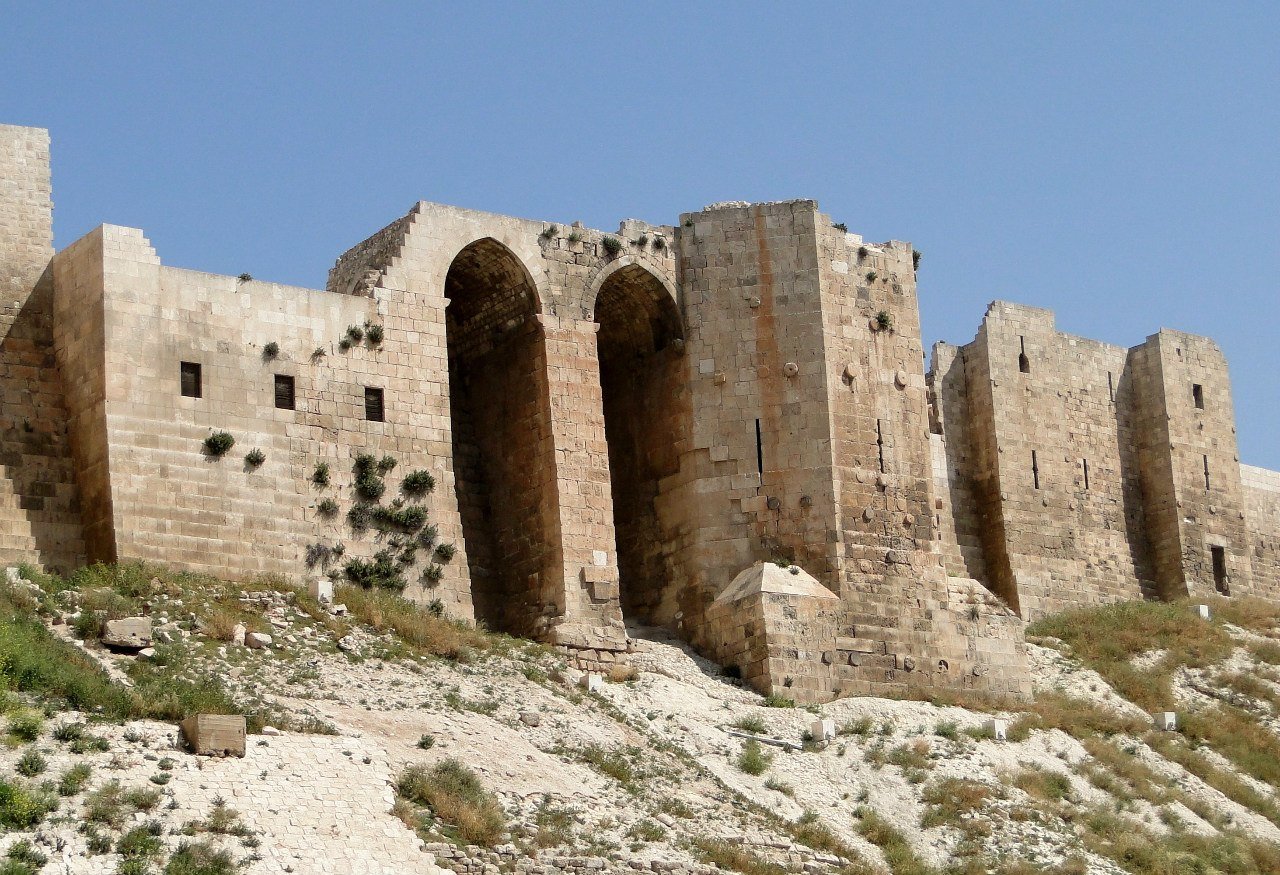 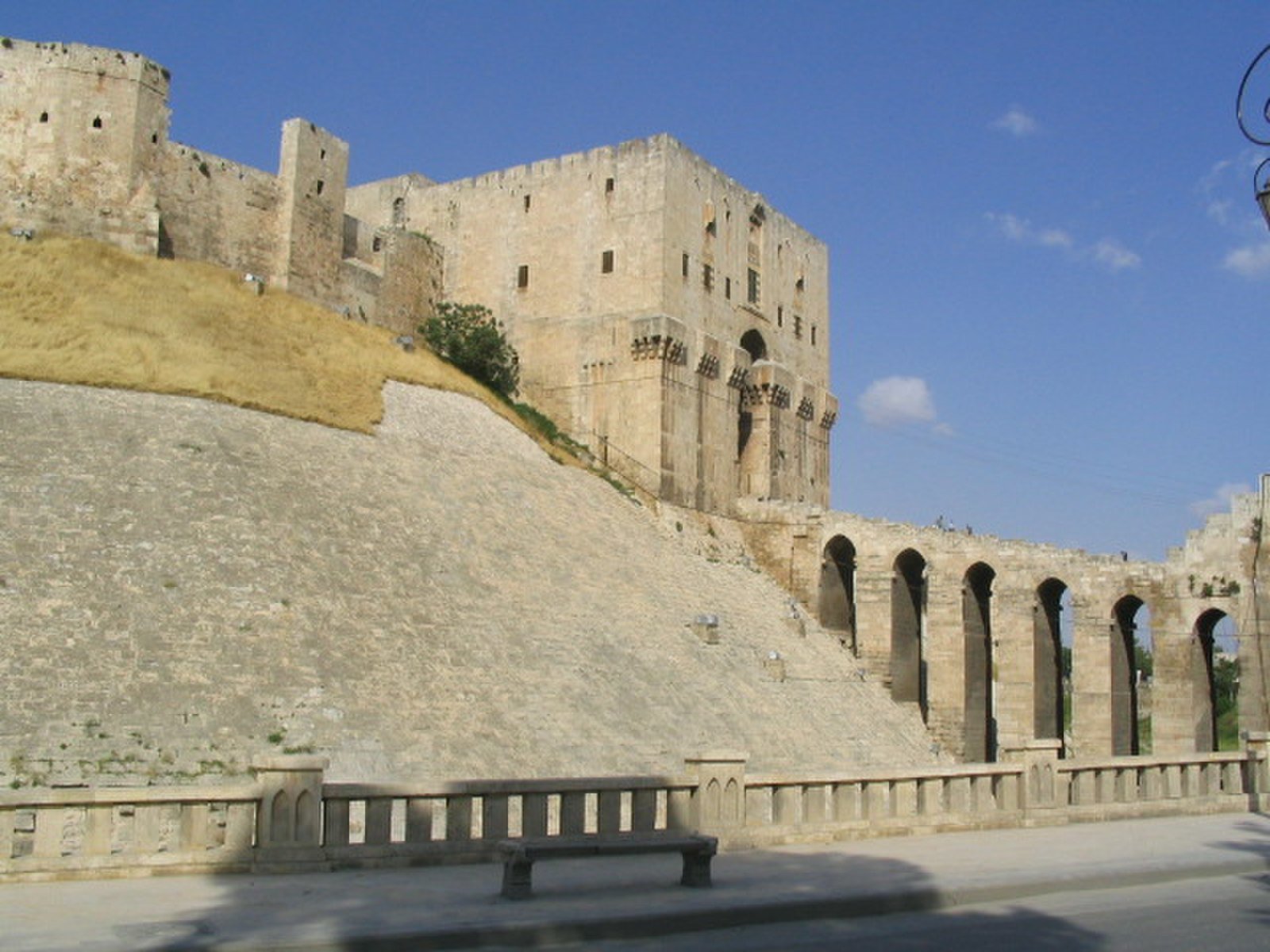 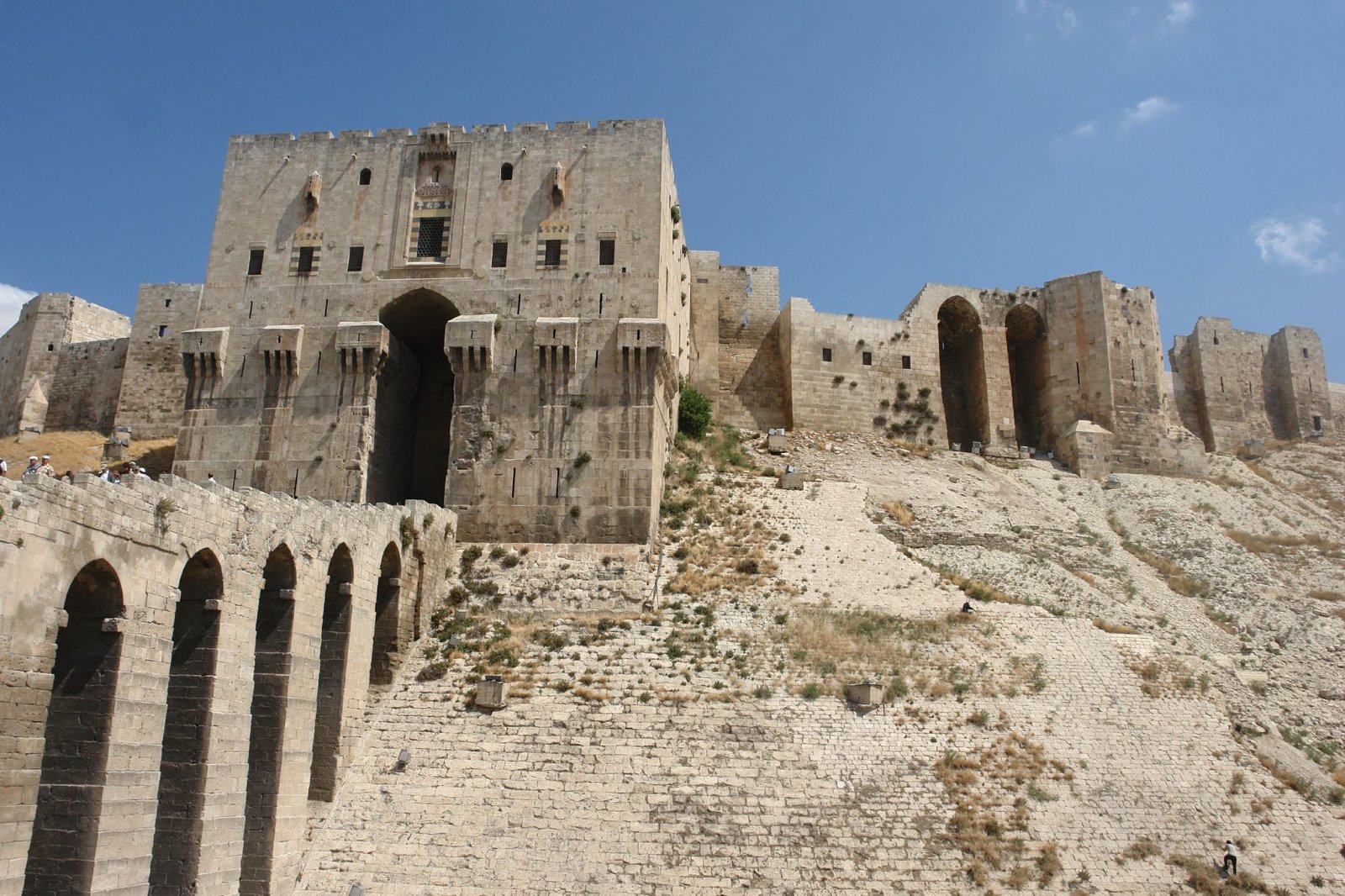 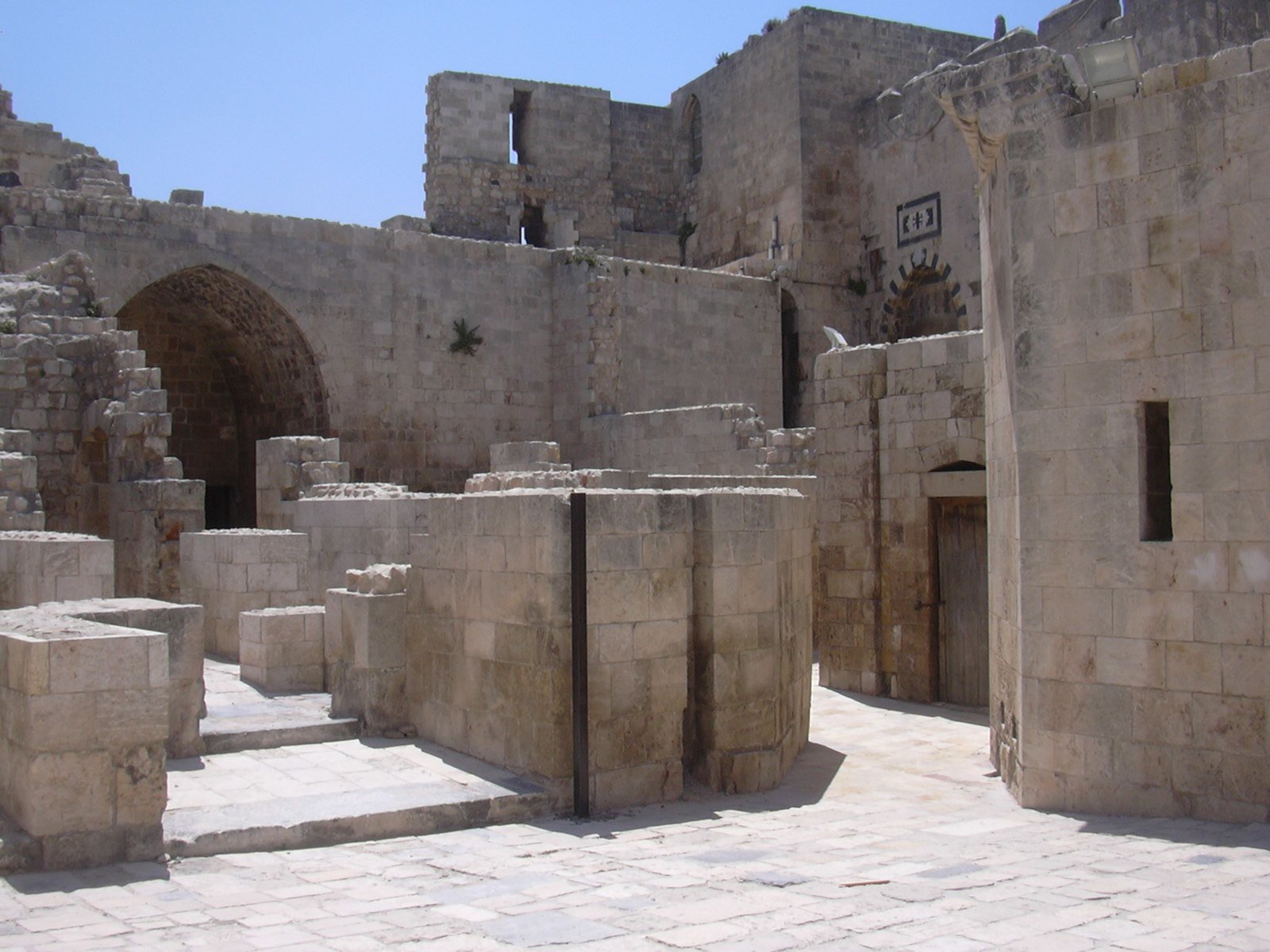 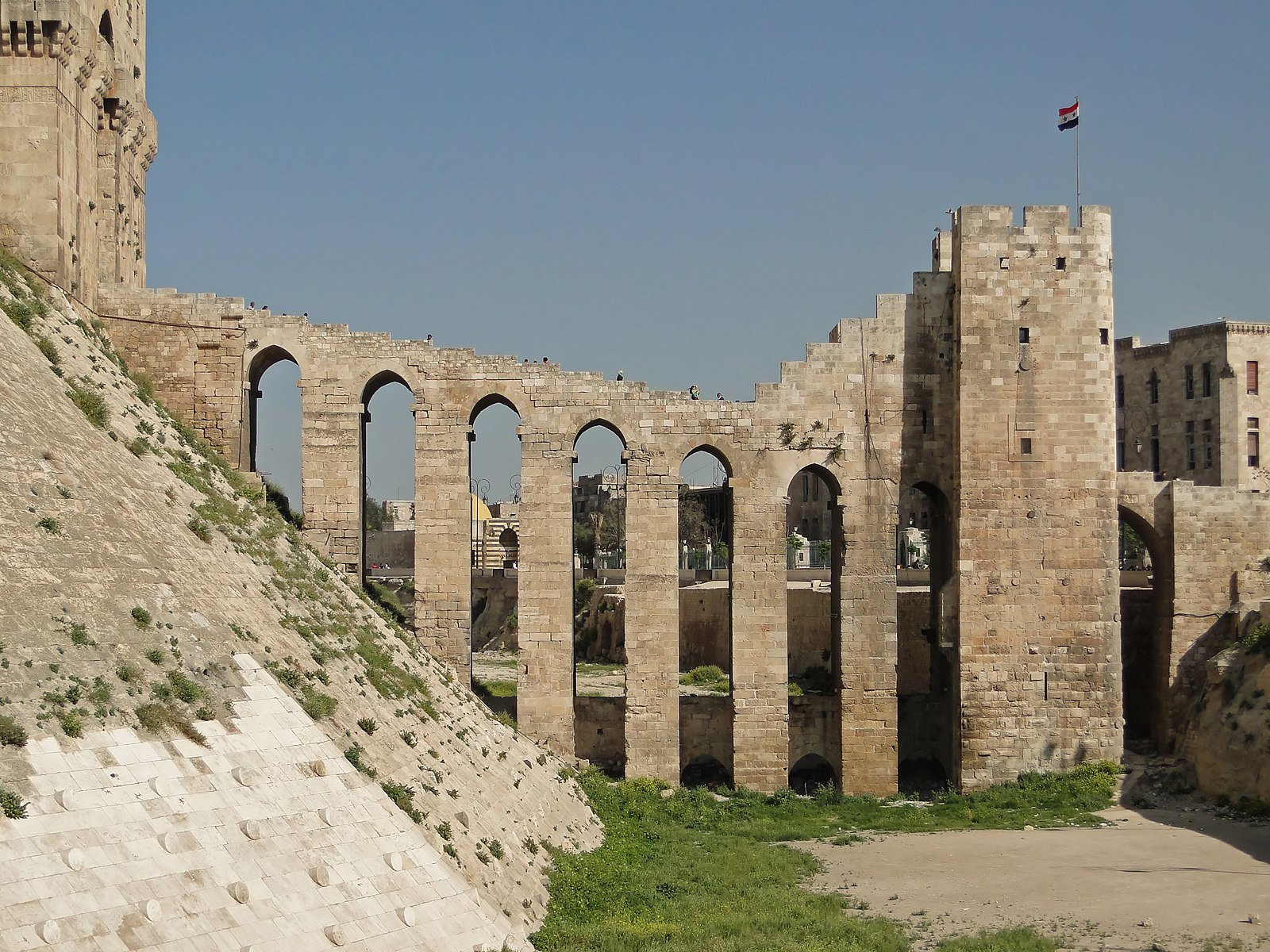