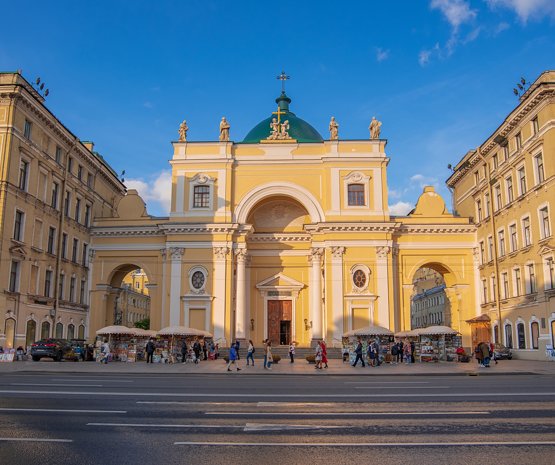 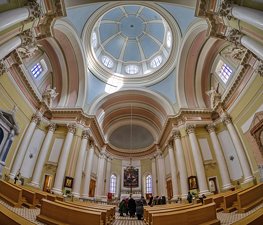 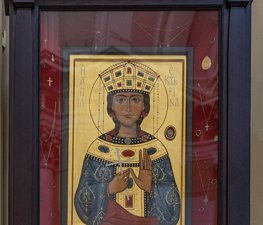 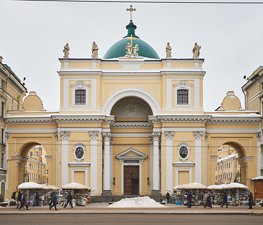 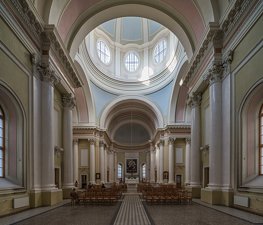 The Catholic Church of St Catherine (Russian: Католическая церковь Святой Екатерины) in St. Petersburg is the oldest Catholic church in the Russian Federation, and the only church with the title of basilica (status granted on 23 July 2013). It is located on the Nevsky Prospekt and is a part of the Archdiocese of Moscow headed by Msgr. Paolo Pezzi.

On December 12, 1705 Peter the Great signed a charter that would allow the construction of Catholic churches in Russia. The church itself (though not the building with which it is today associated) was founded in 1710.

In 1738 Empress Anna granted permission for the church to erect a structure on Nevsky Prospekt, the main street of St. Petersburg. The project, however, met continued problems. The initial designs were based on work by Domenico Trezzini, the architect who designed the Peter and Paul Cathedral and was then deceased. His designs, however, were abandoned in 1751. In the 1760s, the French architect Jean-Baptiste Vallin de la Mothe drew designs for the church, but he returned to France in 1775 and it fell to the Italian architect Antonio Rinaldi to complete the church. On October 7, 1783, the church was completed. Because the Empress at the time was Catherine II of Russia (also known as Catherine the Great), the church was named after St. Catherine of Alexandria.

During the Russian Empire

The Catholic Church of St. Catherine is connected with many important personalities of Imperial Russia and other countries. In 1798, Stanisław II Augustus, the last king of Poland, was buried at the church (in 1938, after 140 years in the crypt, his remains were brought back to Poland), as was, in 1813, the French general Jean Victor Marie Moreau. One parishioner of the church was Auguste de Montferrand, who would go on to build the Saint Isaac's Cathedral. Auguste de Montferrand married in the church and later had a wake here before his wife took his coffin back to France. Even in Imperial Russia, several well-known aristocrats had accepted Catholicism.

The church was run by different monastic orders in its history. Originally run by Franciscans in 1800 Emperor Paul I turned the church over to the Jesuits. In 1815, the church was run by Dominicans, and finally in 1892, the church ceased to be governed by an order and fell under the auspices of Diocesan priests, though a Dominican community remained at the church. On the eve of the Russian Revolution of 1917, the church membership numbered more than thirty thousand parishioners.

Under the Soviets, the activities of the church were repressed. The rector of St. Catherine's Church, Monsignor Konstantin Budkevich, was shot in the Lubyanka Prison on Easter Sunday, 1923. The church, however, remained open until 1938. In 1938 the church was closed and ransacked. Artifacts, icons and books from the church's splendid library were thrown out to the street. The church was further damaged by a fire in 1947, that destroyed the internal decorations of the church and its organ.

For 30 years, the building was used only as storage space for the nearby "Museum of History of Religion and of Atheism" located in the former Cathedral of Our Lady of Kazan. In late 1970s plans were made to rebuild the church as an organ hall for the Saint Petersburg Philharmonic Orchestra. These plans were never completed, however, as the building was again ravaged by fire in 1984. Instead the government used the building as offices and apartments.

Following the collapse of the Soviet Union, the Catholic Church in Russia began to operate once more in the early 1990s. In February 1992, city authorities decided to return the building to the Catholic Church. That same year, the church began rebuilding. According to the church, after being closed by the Soviets in 1938, a 20-year-old woman went into the ransacked temple and retrieved the crucifix out of the sanctuary. When the building was returned to the Catholic Church, she returned the crucifix. The first stage of restoration was finished by October 1992, with a temporary altar in place for worship. In October 1998 a Chapel of the Annunciation was opened. The main altar was completed and blessed in 2000. The restoration of most of the church was completed in 2003, and the central gates were opened. Restoration of the interior of the church is ongoing.

Like many churches, the building is in the shape of a Latin cross. The transept of the church is crowned by a large cupola. The temple is 44 m in length, 25 m in width, and 42 m in height. The sanctuary has room for about 2,000 people. The main facade of the church has a monumental arched portal, which rests on self-supporting columns. Above the facade is a high parapet, with the figures of four evangelists and angels on top. Above the main entrance is an inscription from the Gospel of Matthew (in Latin): "My house shall be called the house of prayer" (Matthew 21:13) and the date the church was completed.

Kazansky Bridge (Russian: Каза́нский мост) is a bridge across Griboy

Перинные ряды is a tourist attraction, one of the Arts centres in

The Italian Bridge (Russian: Италья́нский мост) is the bridge across t

The Arts Square (Russian: площадь Искусств, Ploshchad Iskusstv) is a 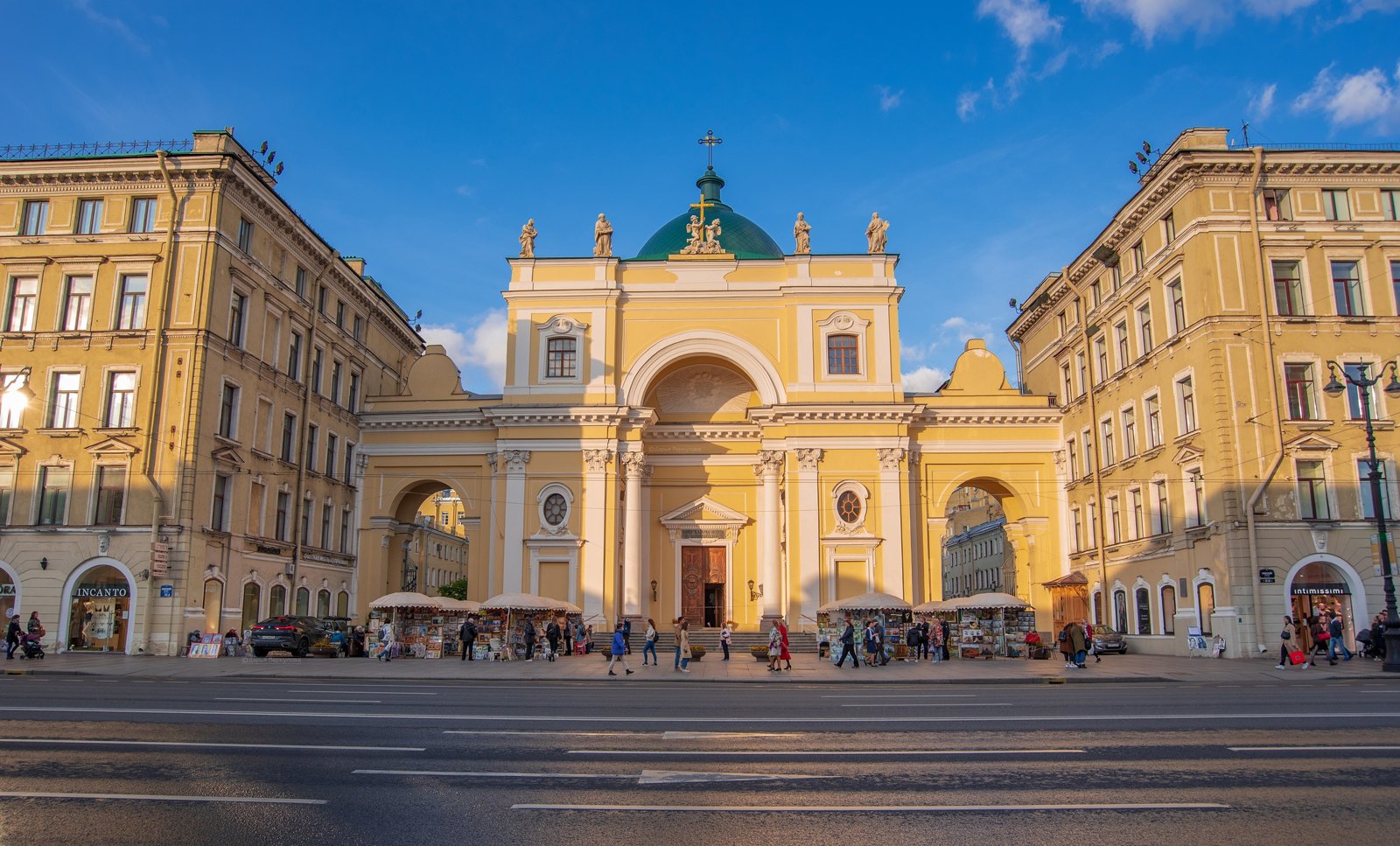 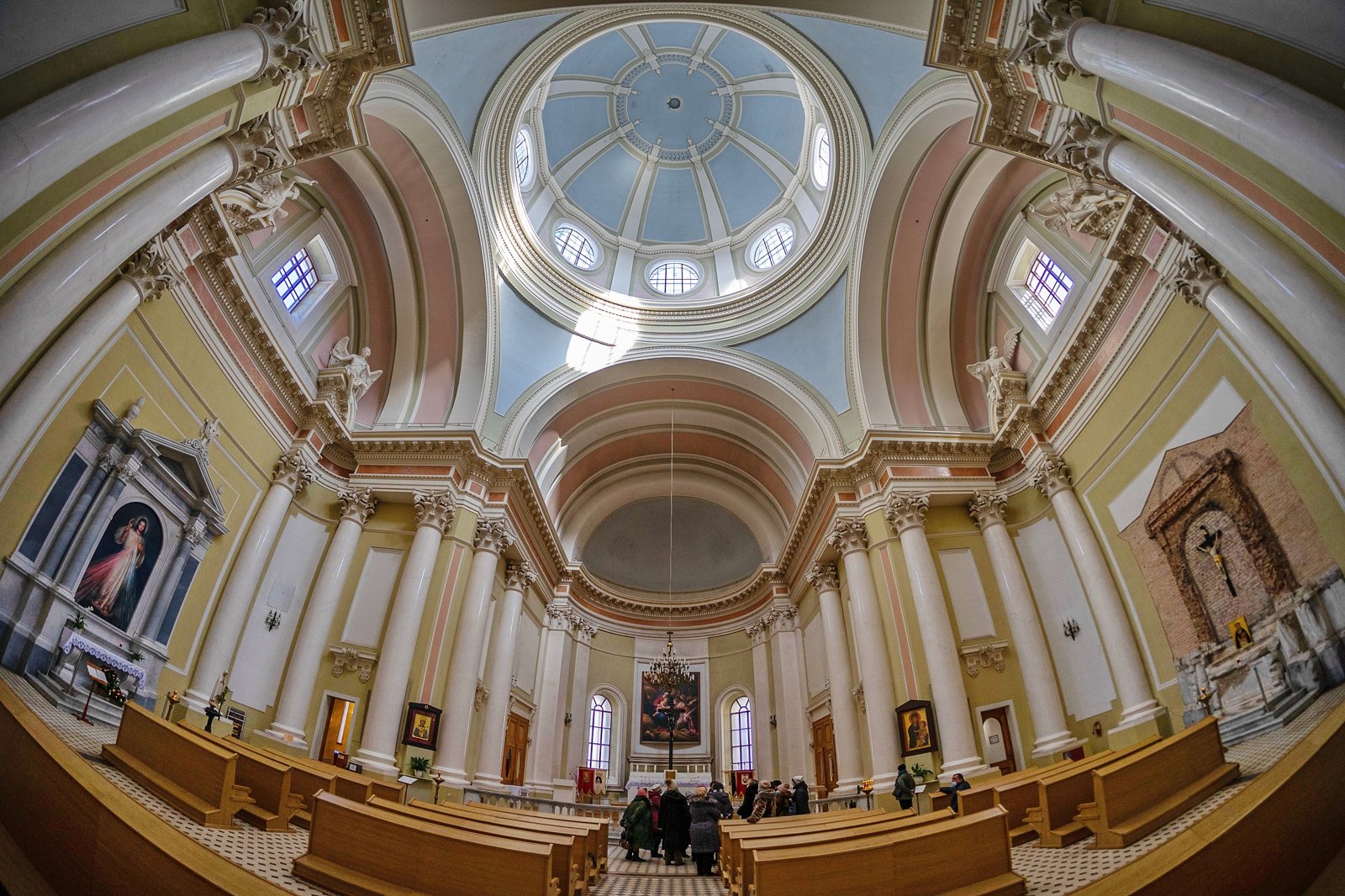 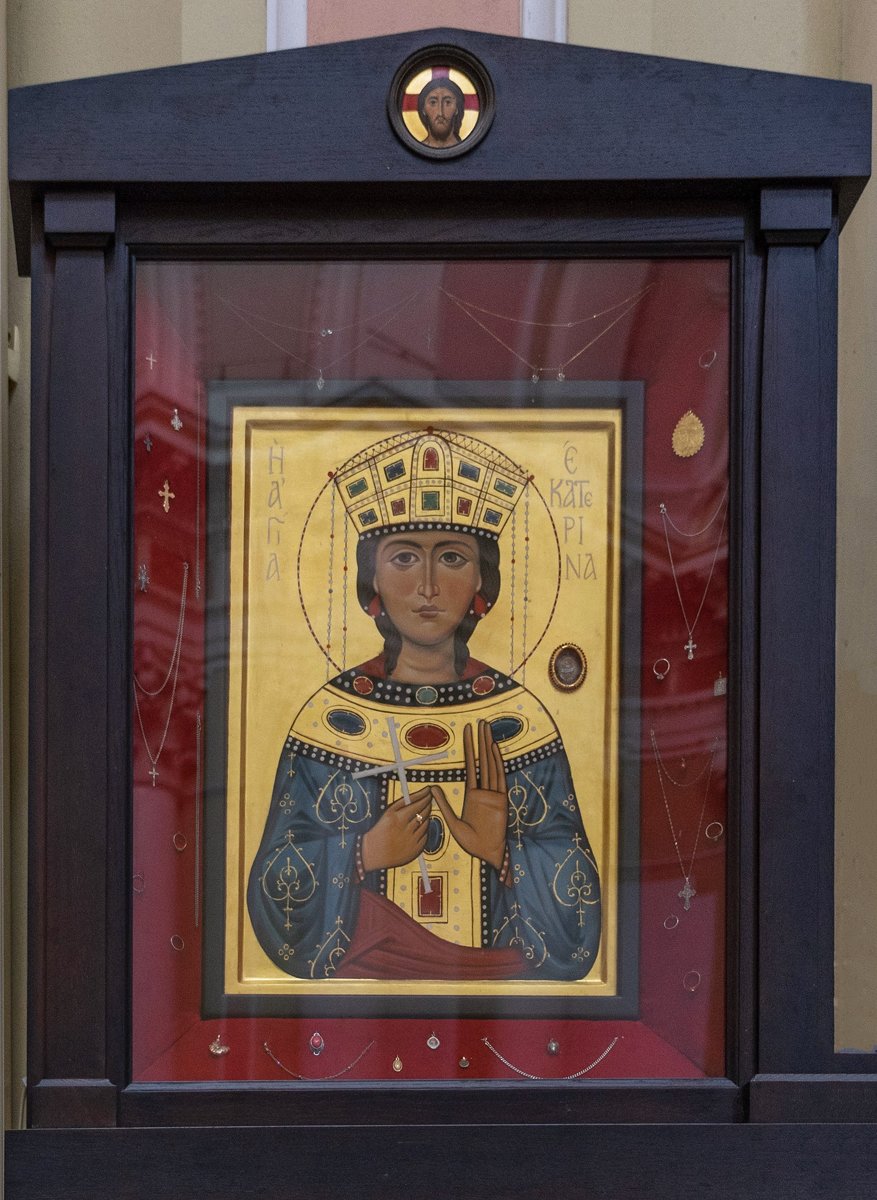 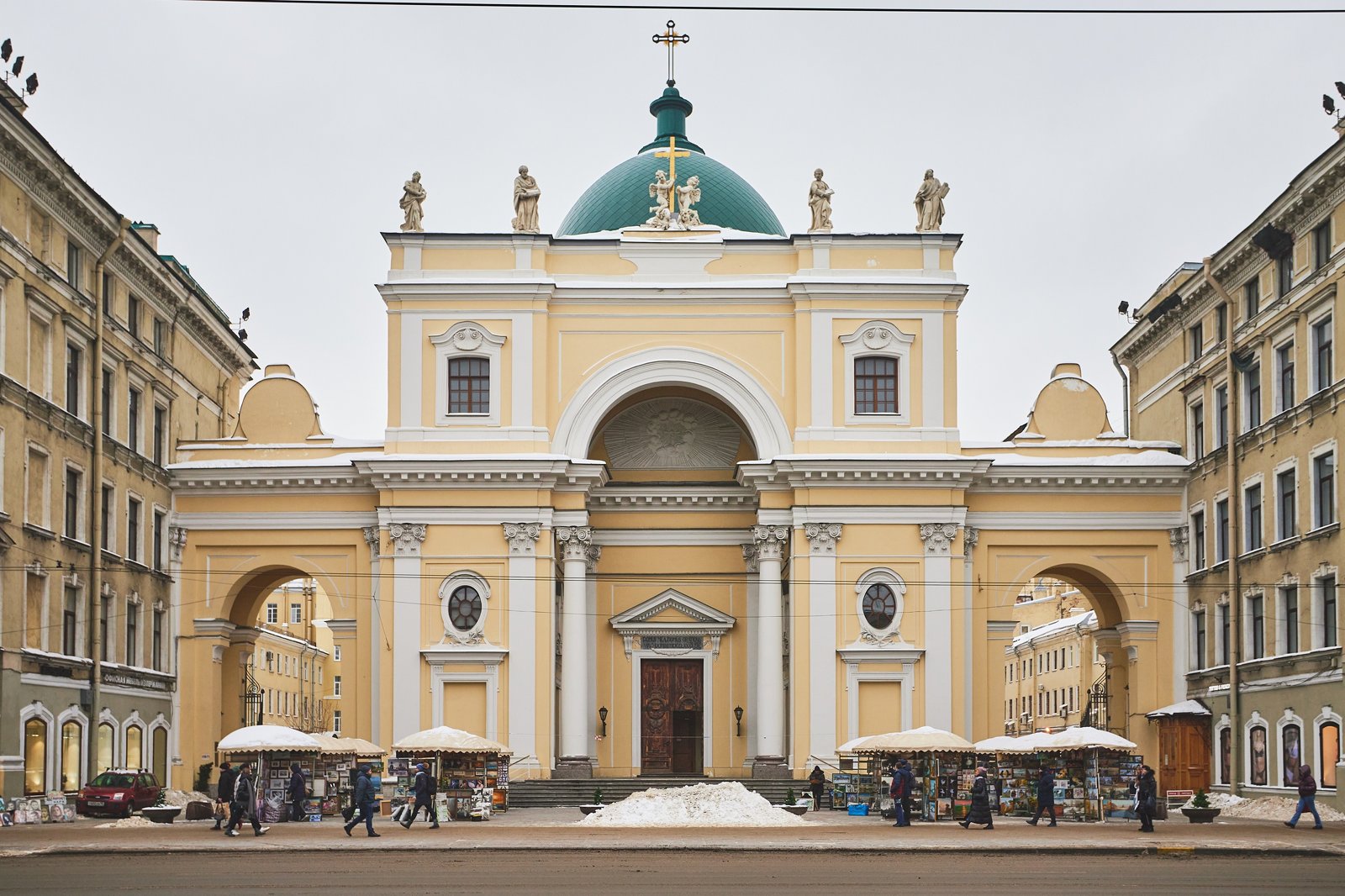 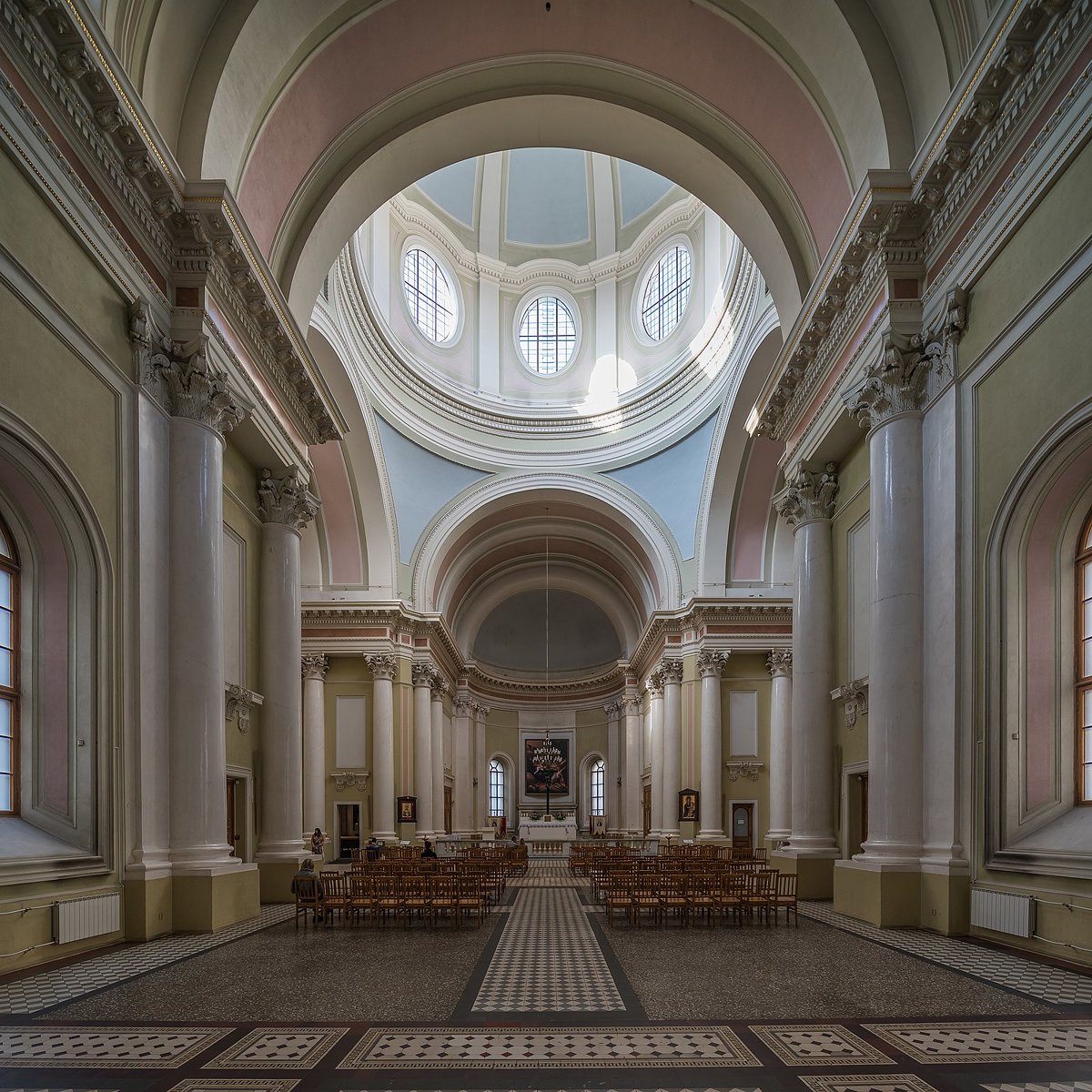 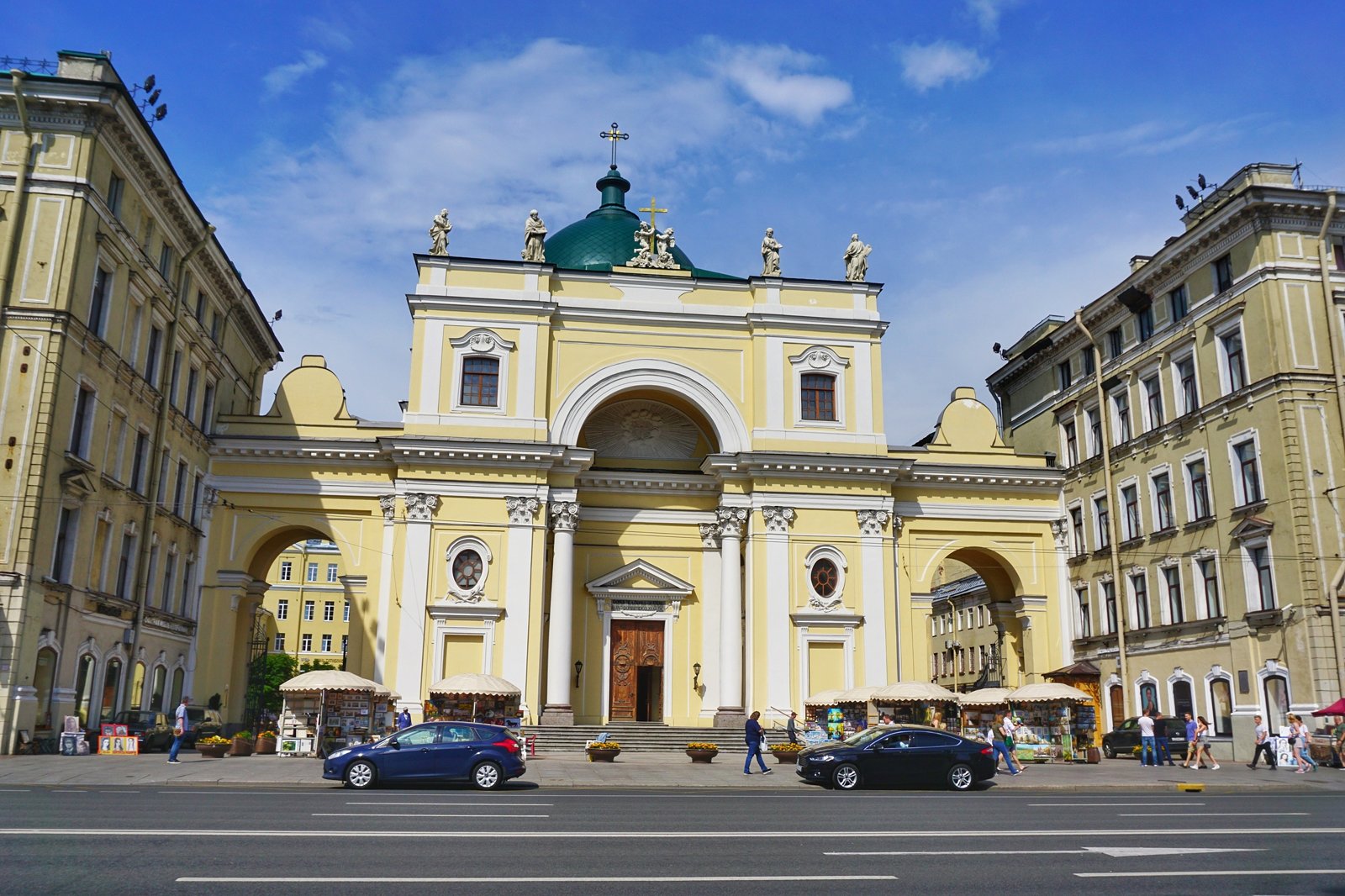 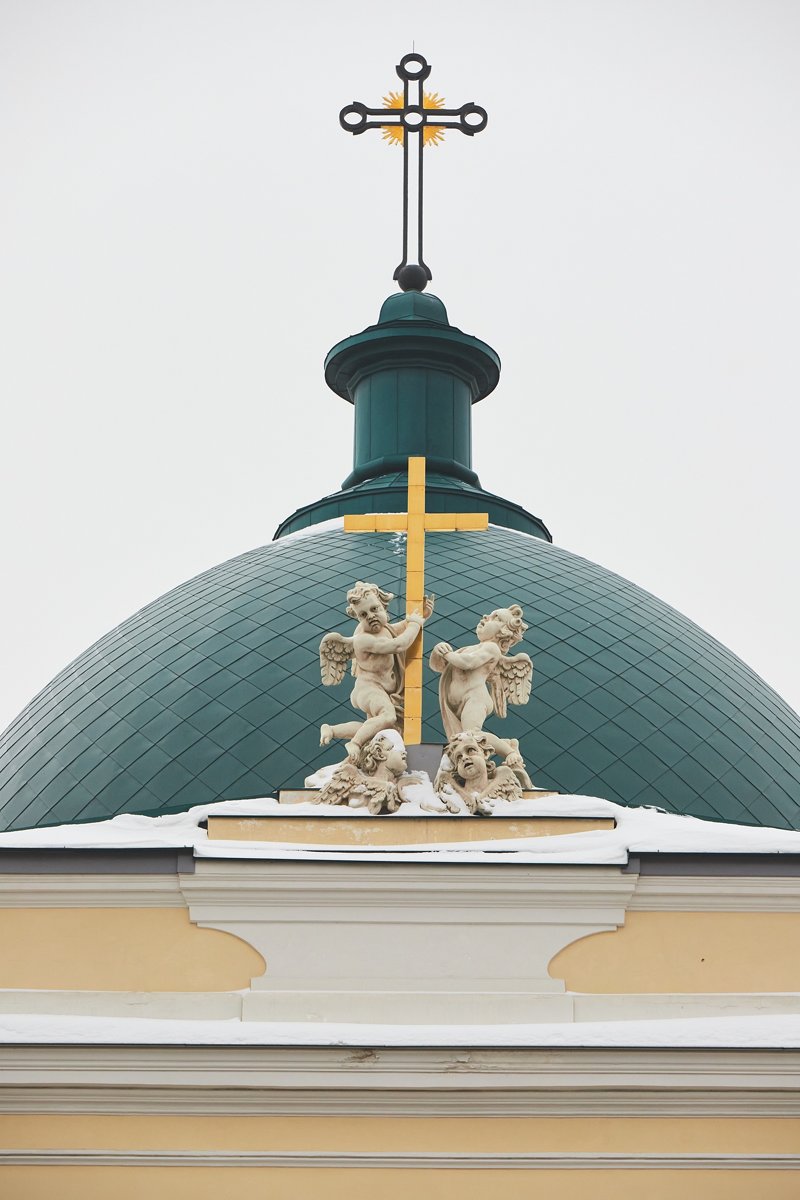 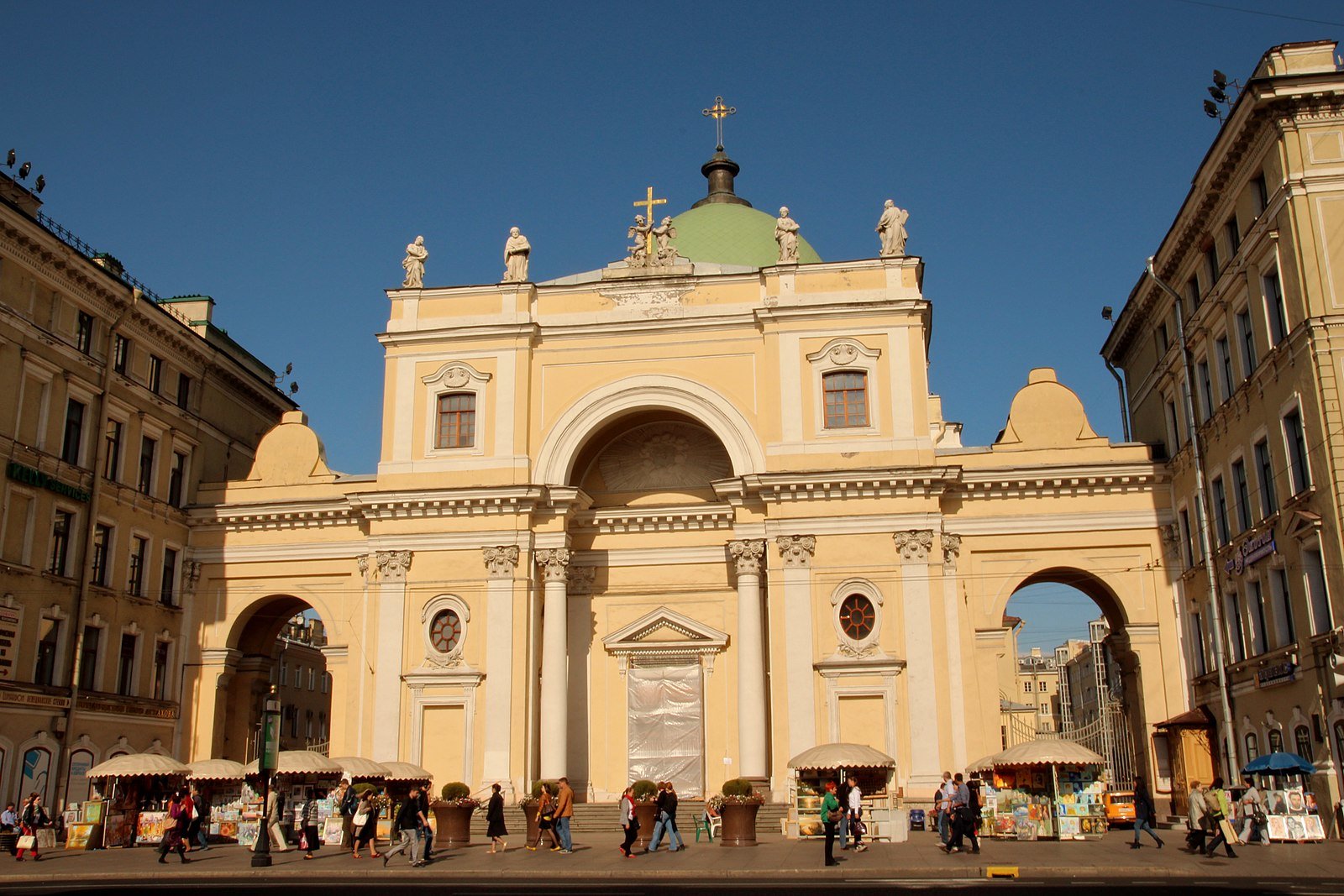 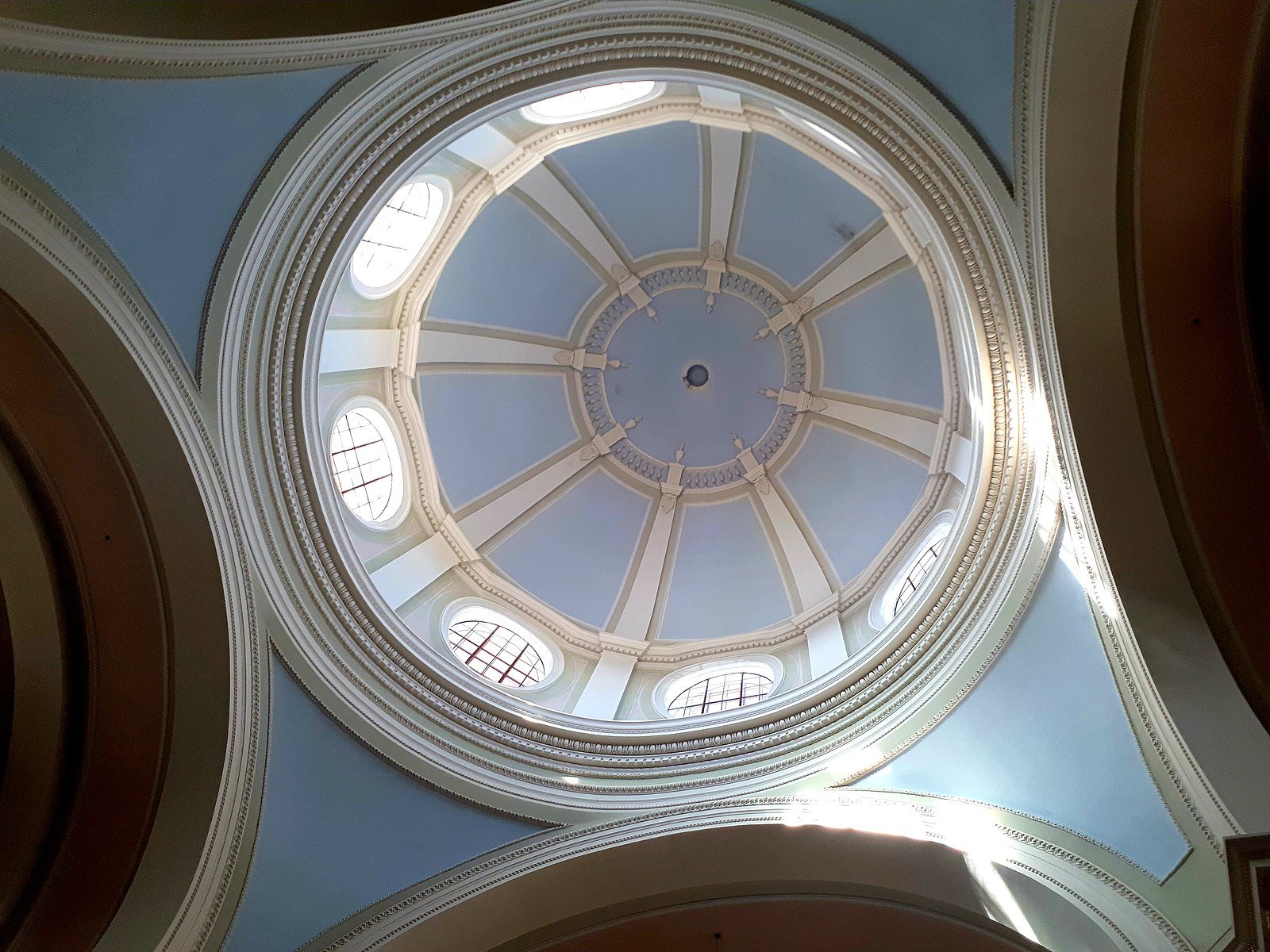 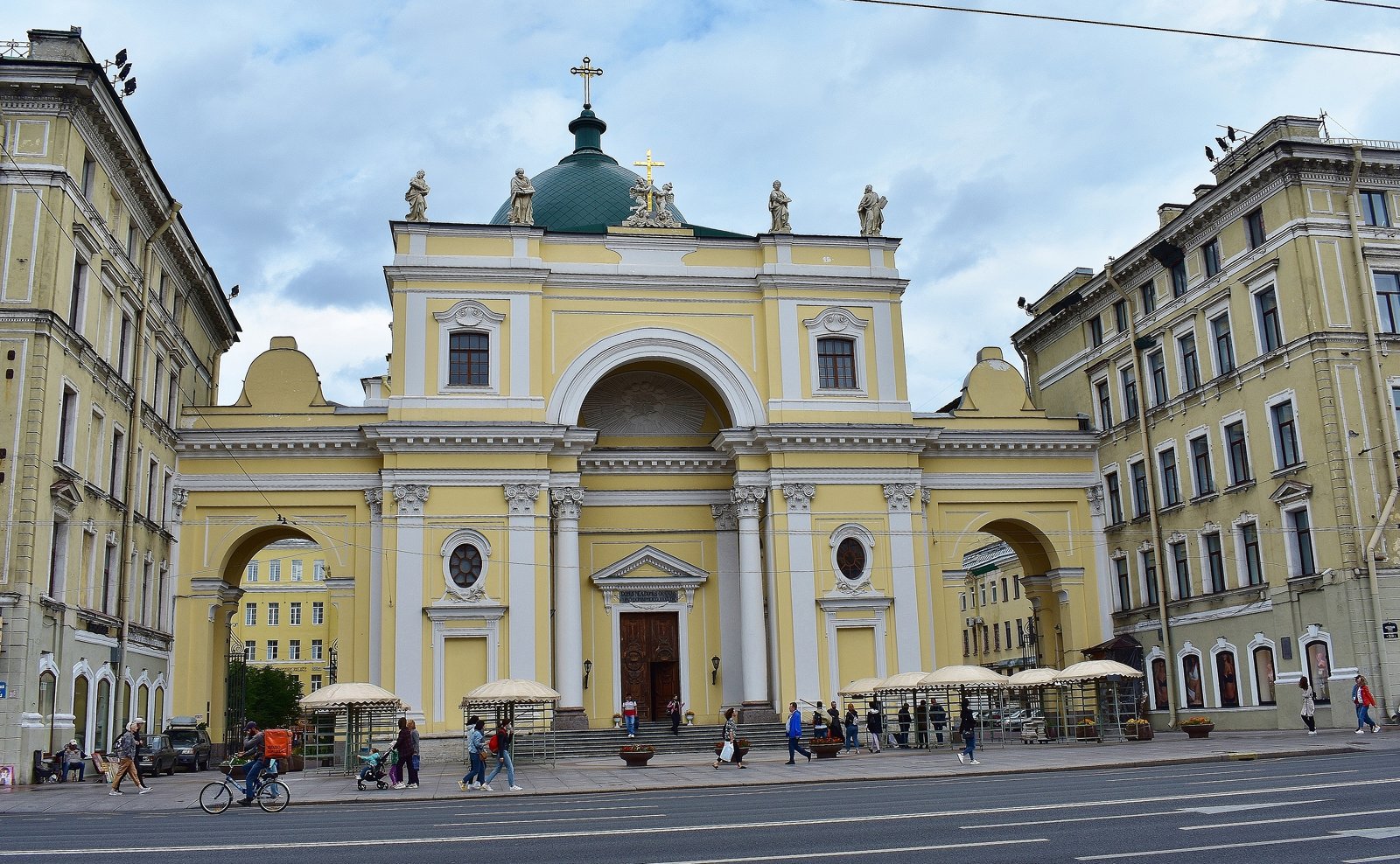 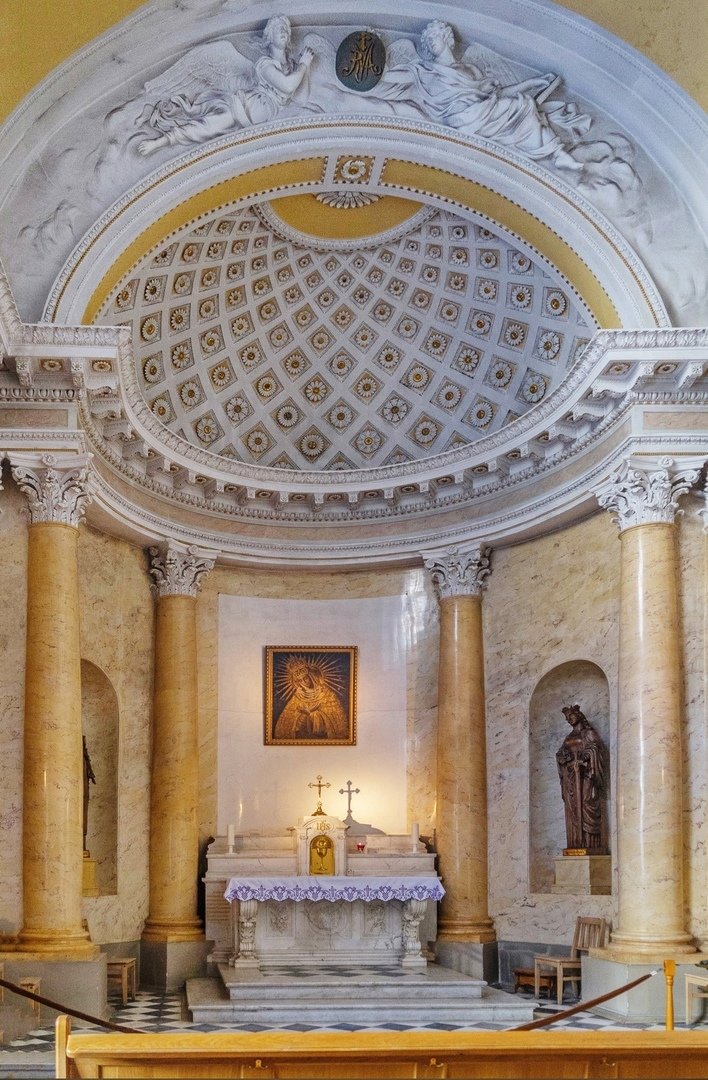 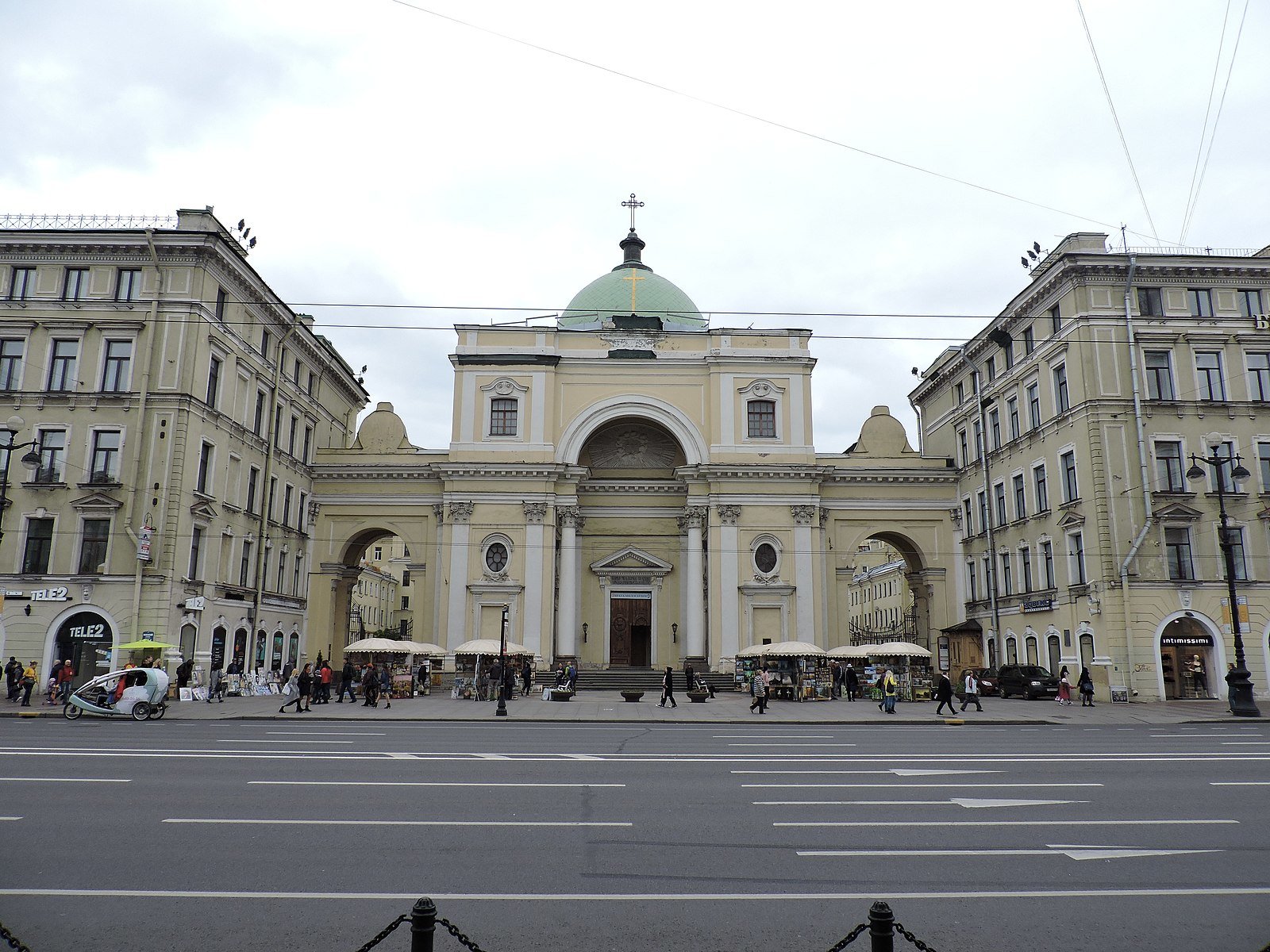 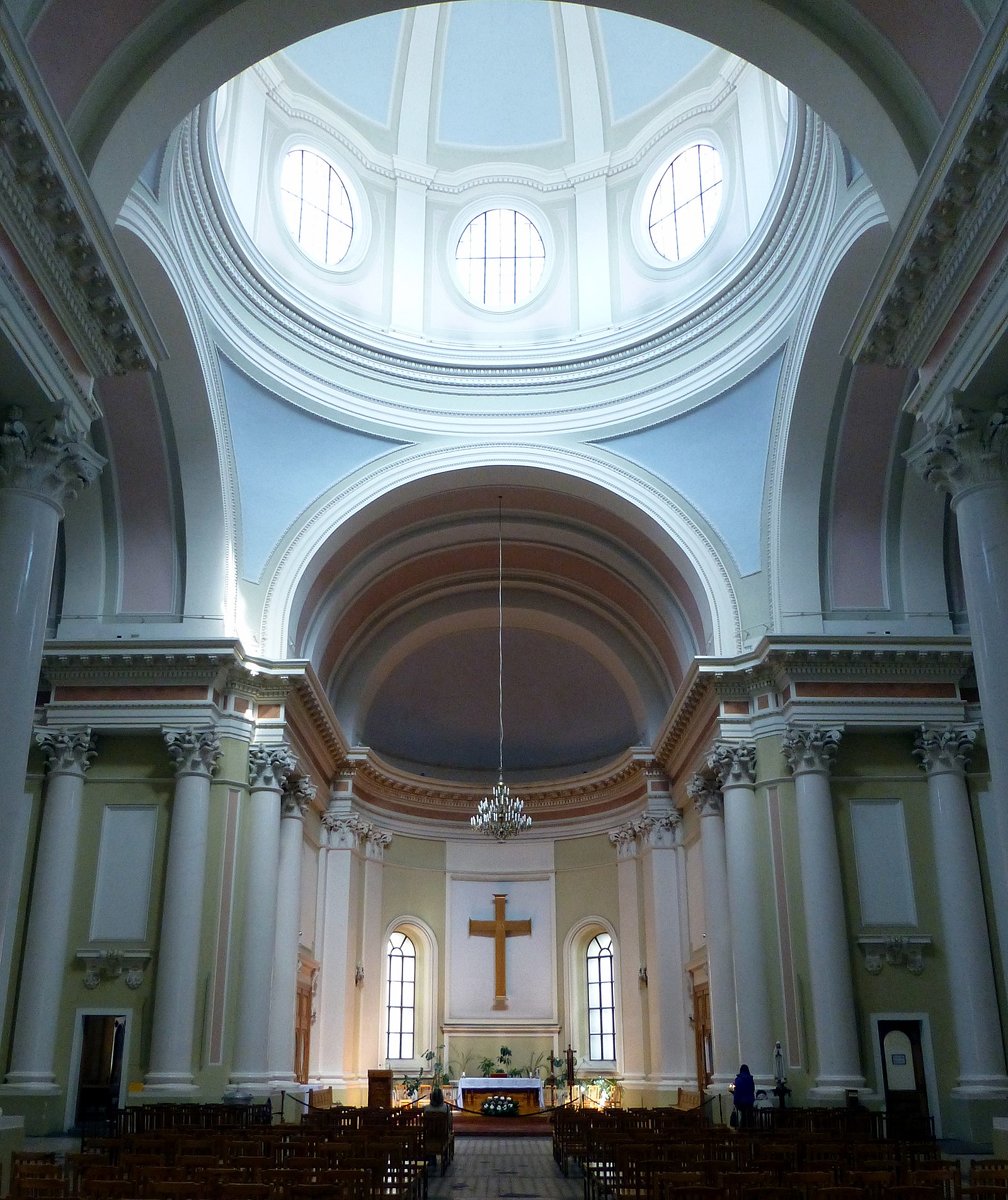 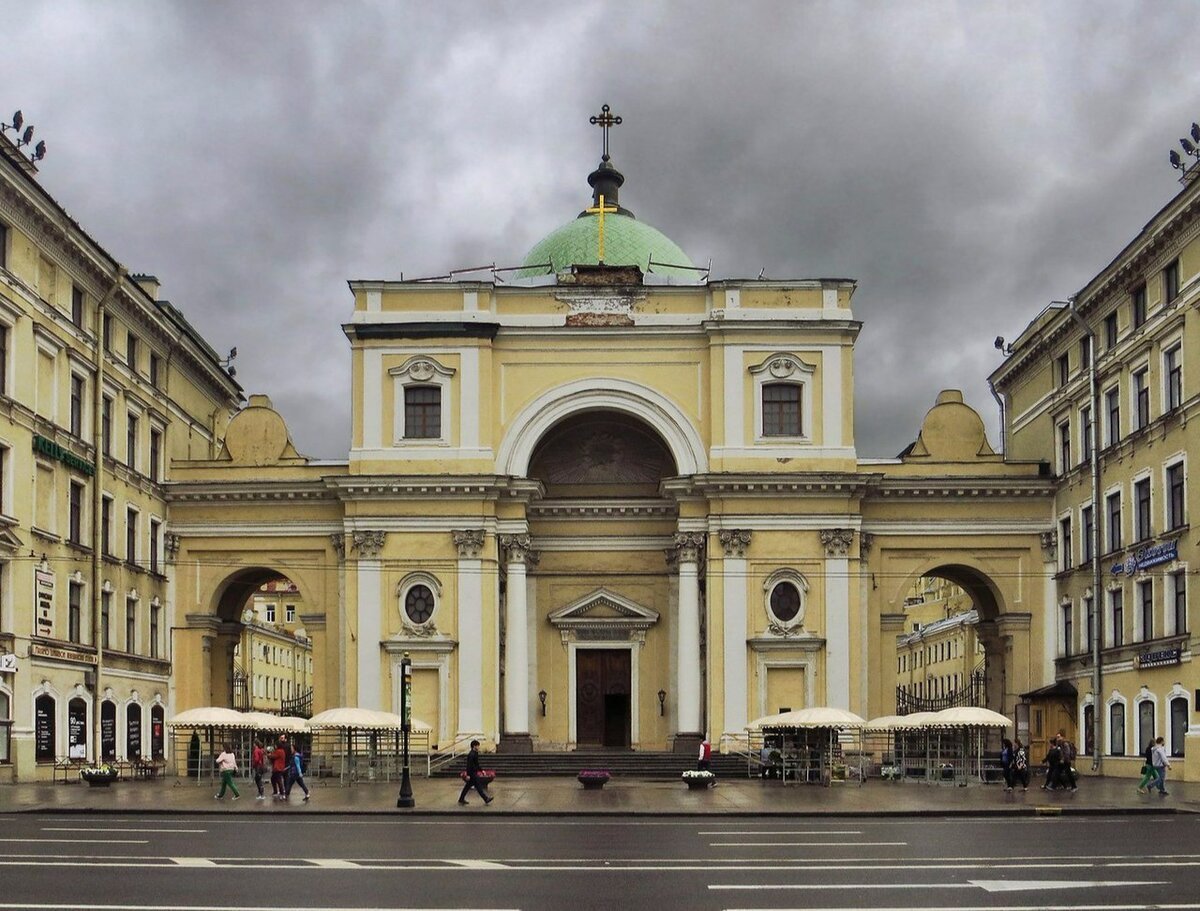 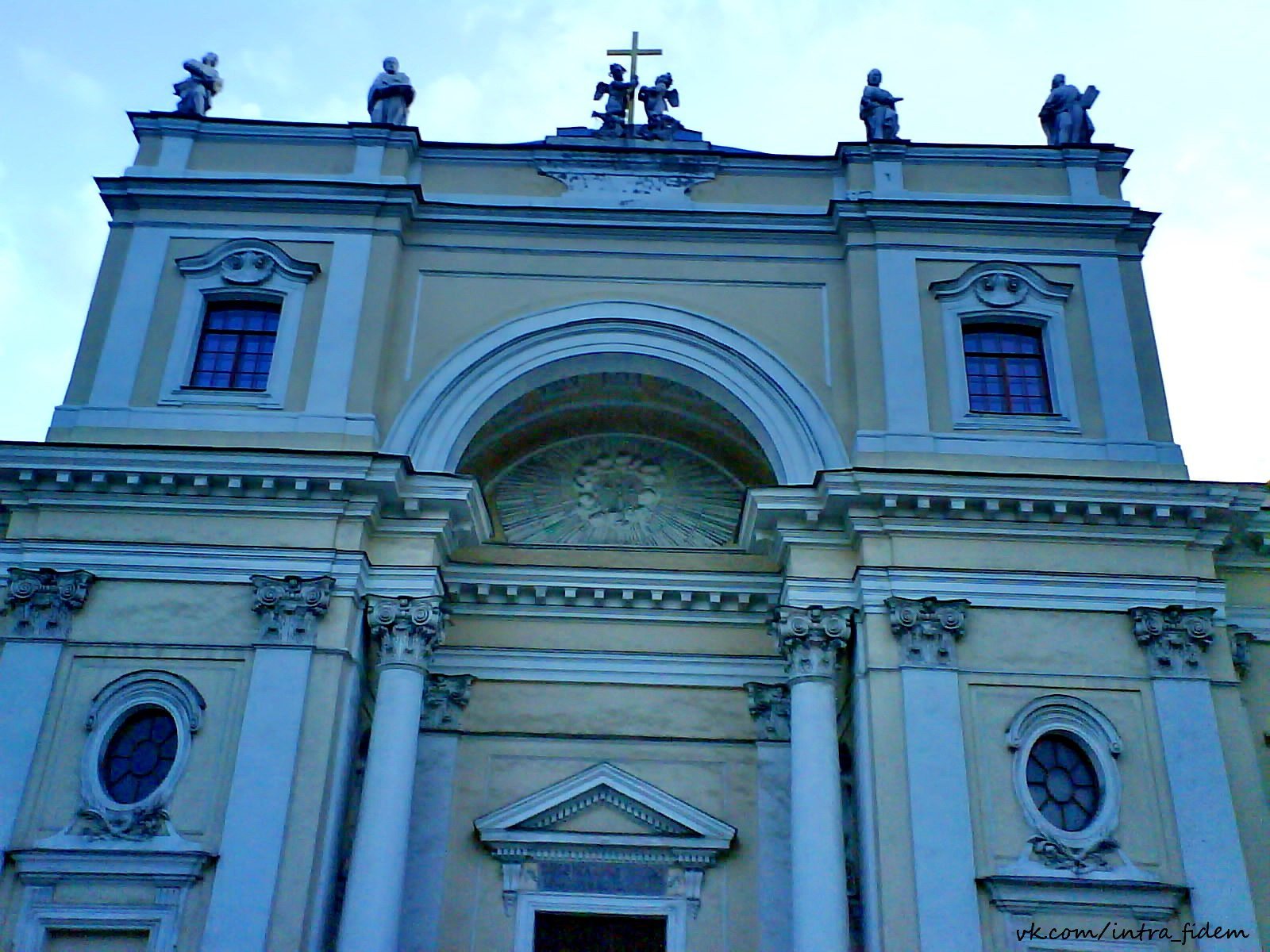 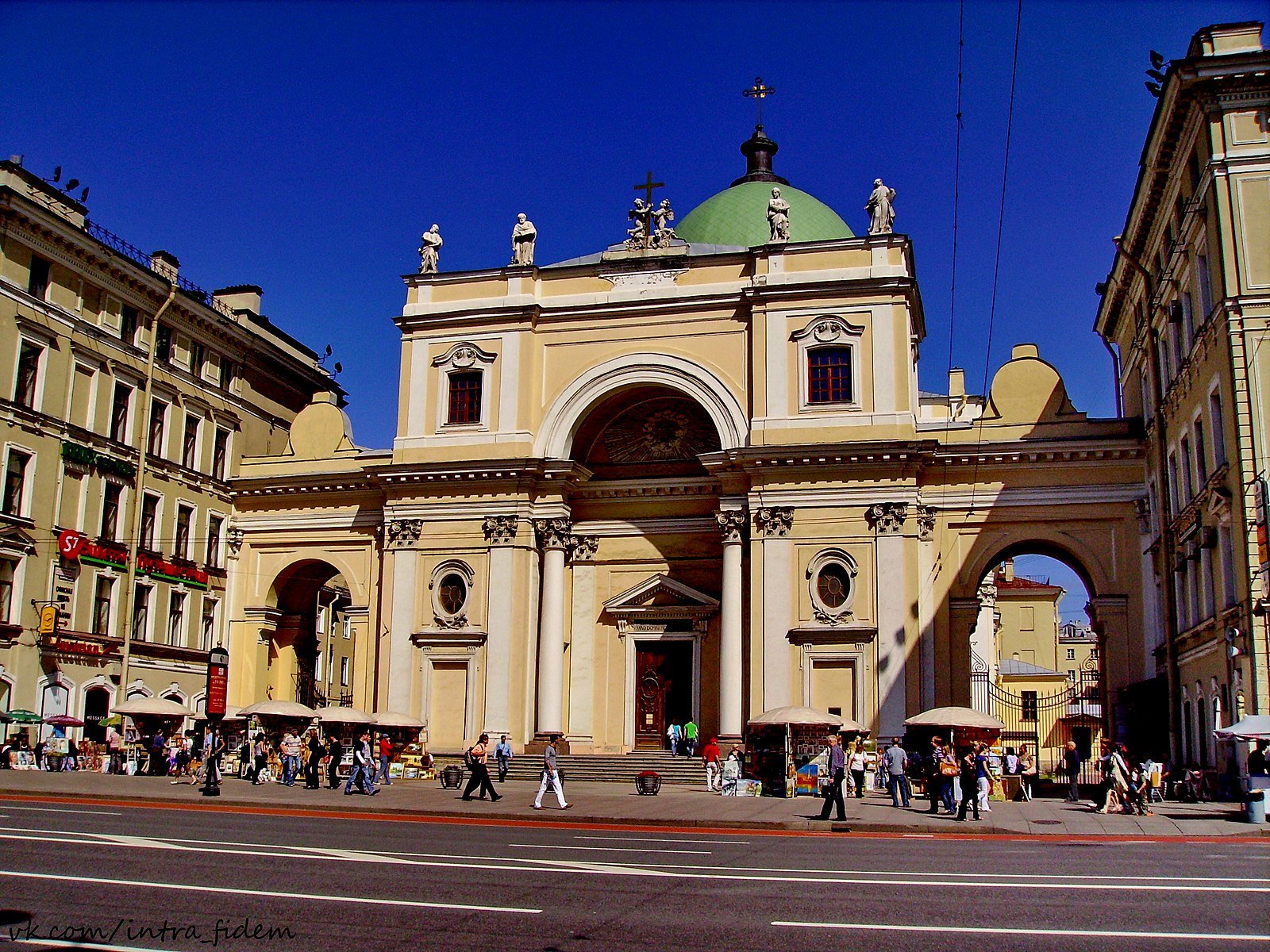 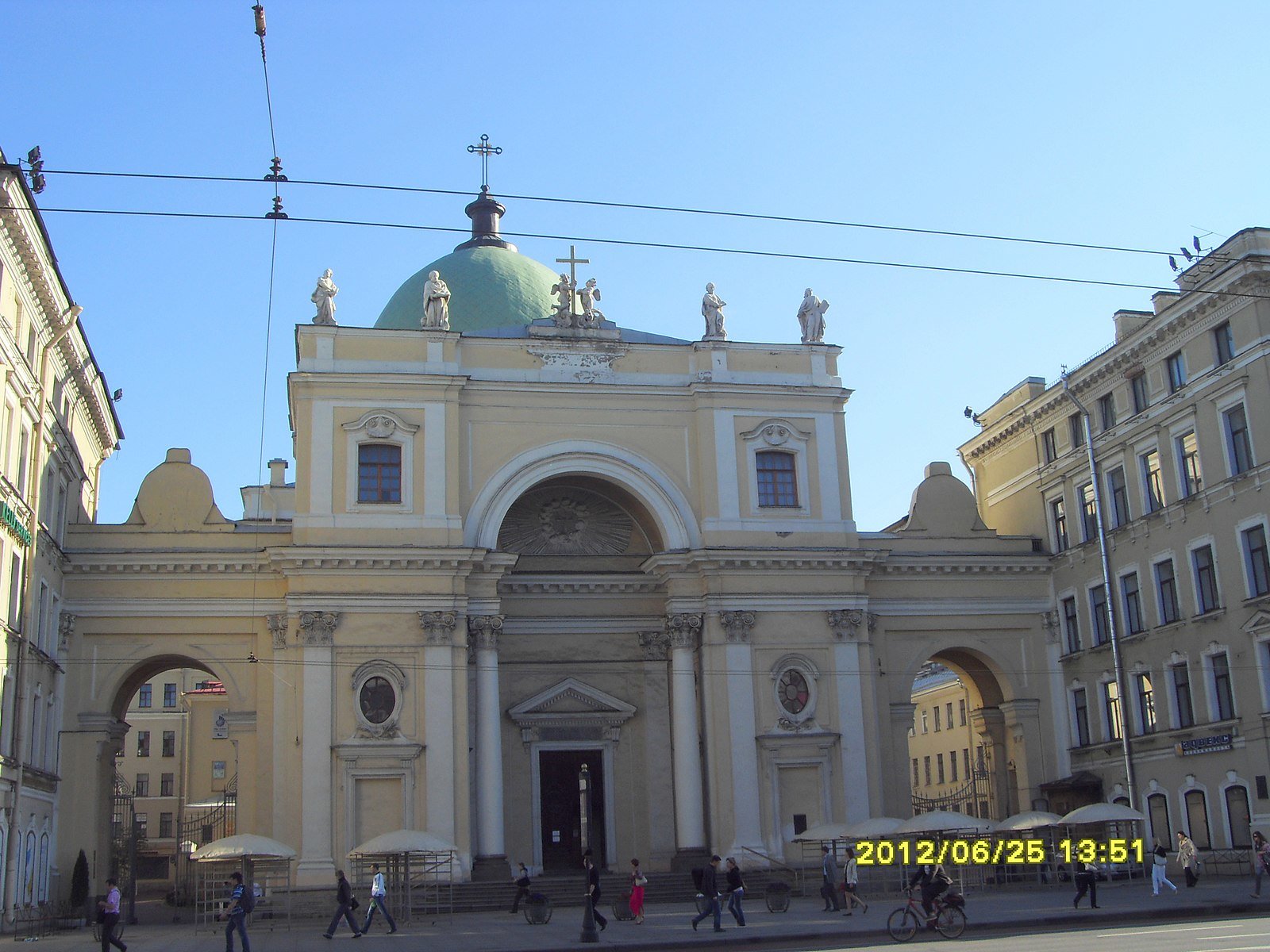 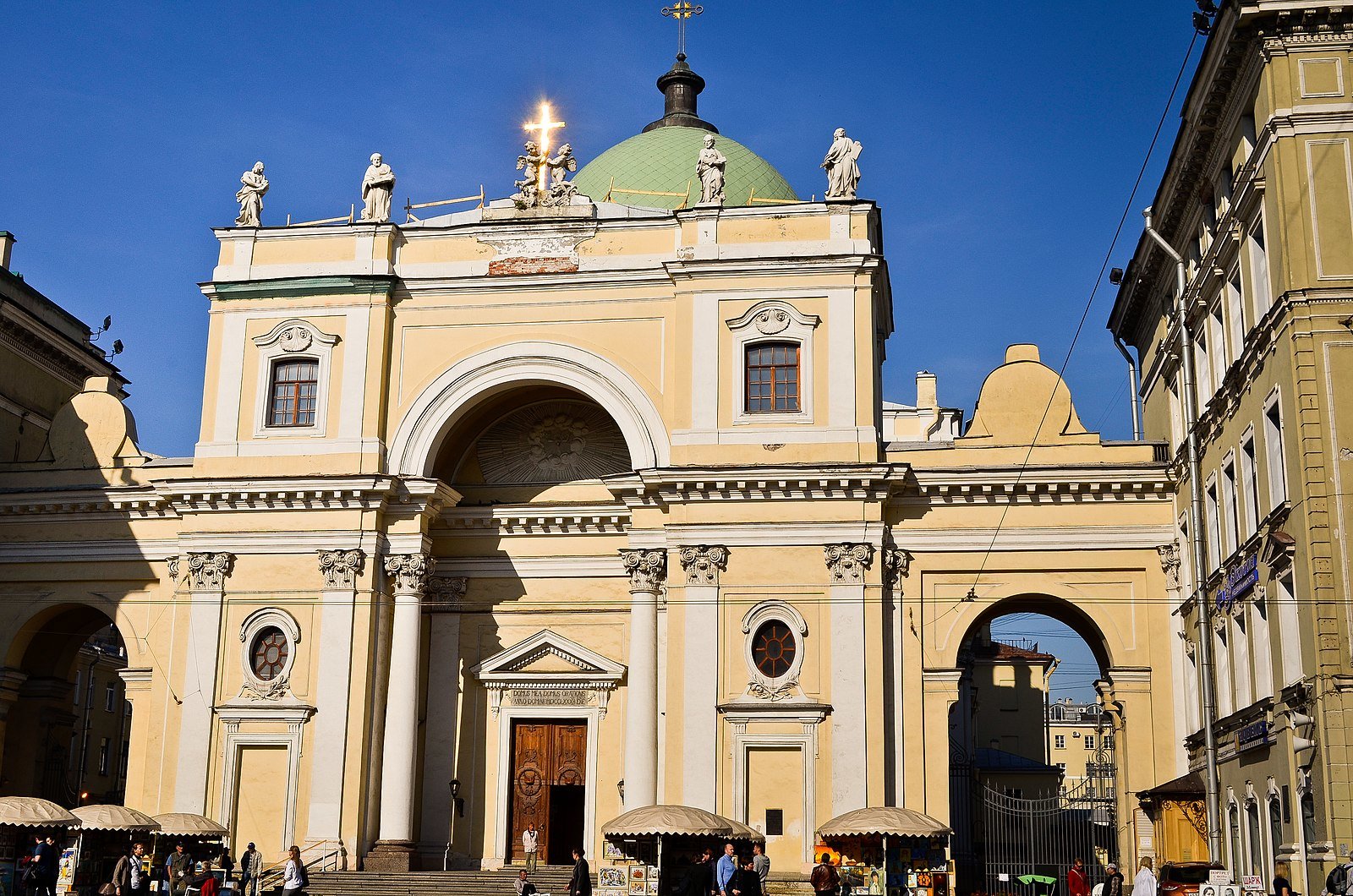 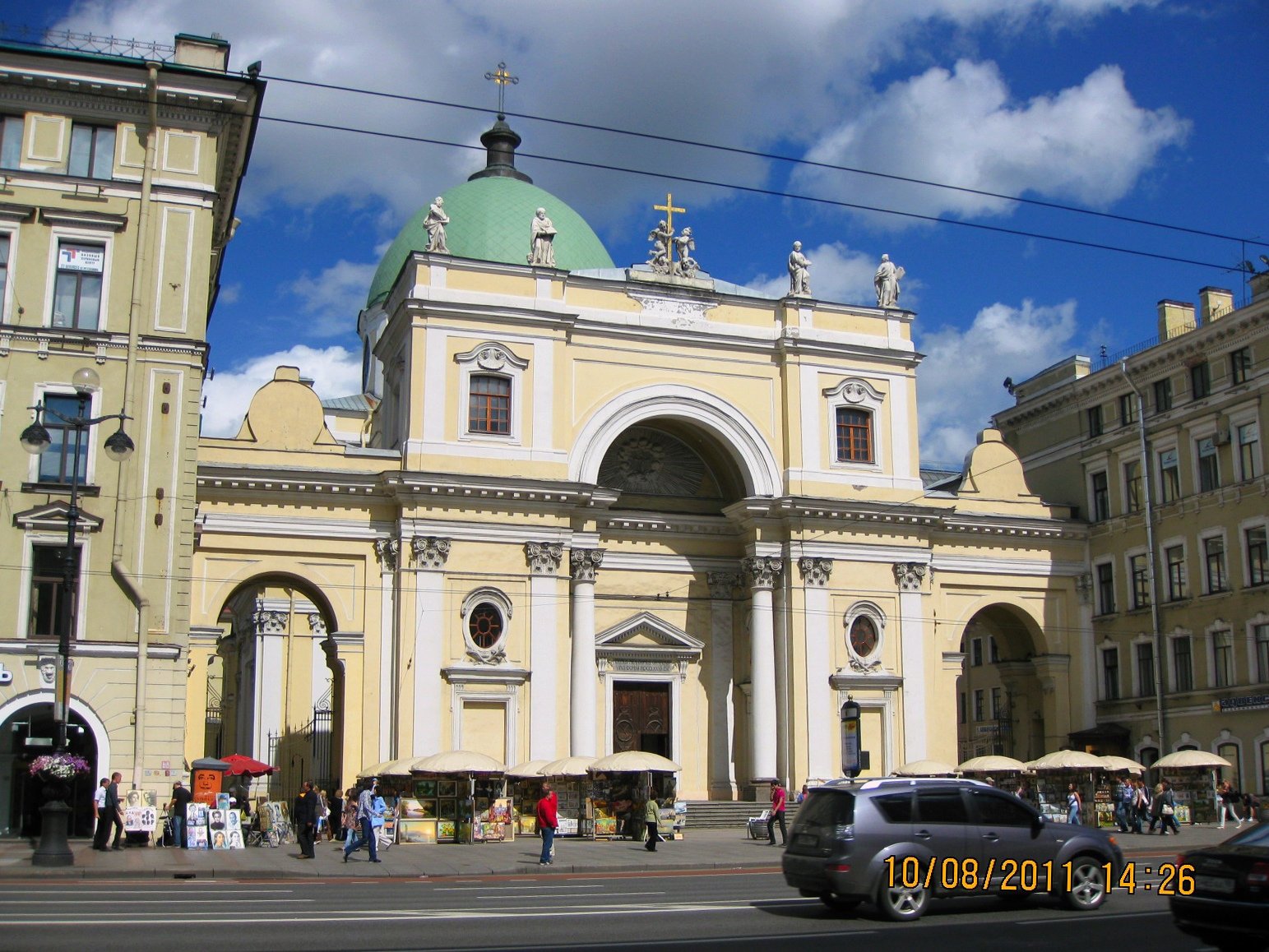 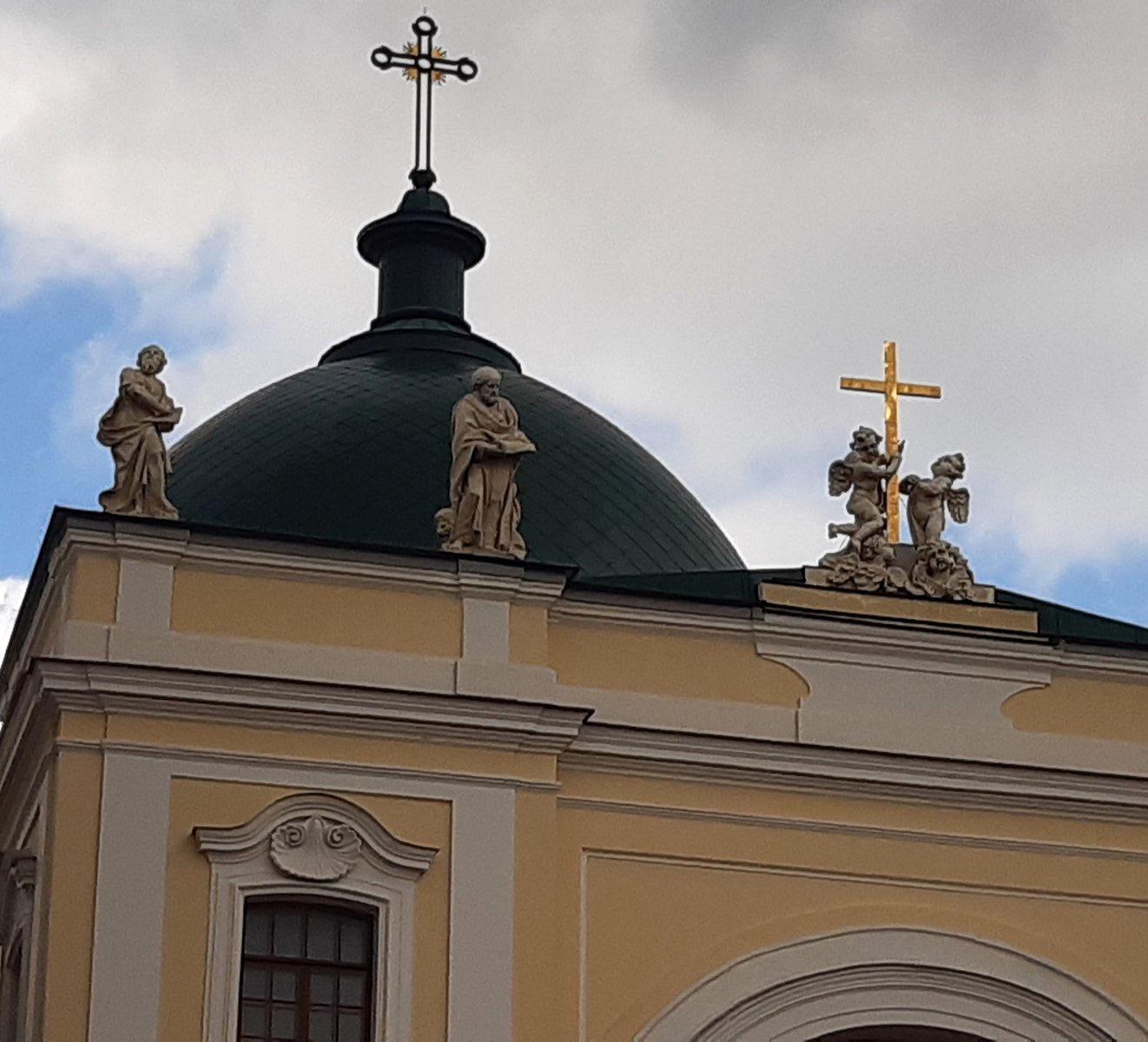 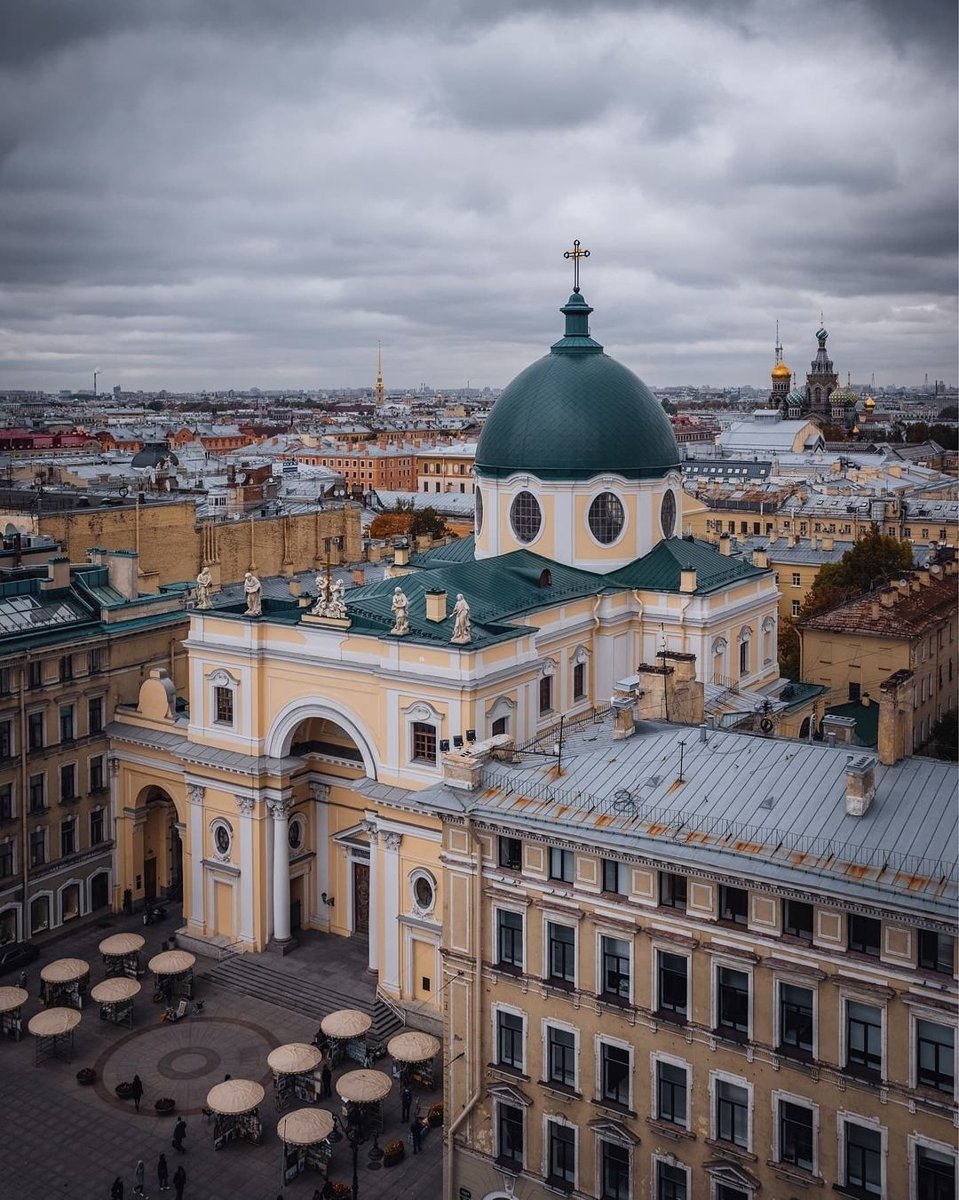