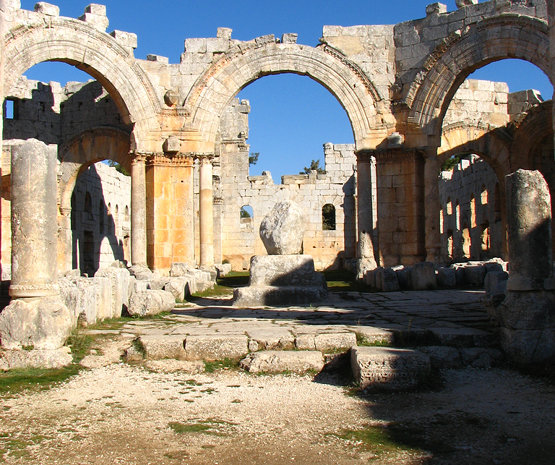 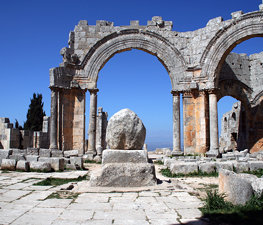 The Church of Saint Simeon Stylites (Arabic: كنيسة مار سمعان العمودي‎ knīset mār semʕān l-ʕamūdī) is a well preserved church that dates back to the 5th century, located about 30 km northwest of Aleppo, Syria. It is built on the site of the pillar of St. Simeon Stylites, a famed hermit monk.

St. Simeon was born in 386 AD in a village in the Amanus Mountains. He joined a monastery in this area, but soon decided to seek the religious life alone as a hermit monk. After living in an cave for a little while, he relocated to the top of a pillar eventually reaching 15 meters high to achieve greater seclusion. He soon attracted even greater crowds who came from far and near to hear him preach twice a day.

After 37 years atop his pillar, St. Simeon died in 459. His body was ceremoniously escorted to Antioch by seven bishops and several hundred soldiers, followed by a throng of devoted followers. Simeon's grave in Antioch became a major site of pilgrimage, and so did his pillar on the rocky bluff where he had spent the last four decades of his life.

Within just a few decades (c.475), a vast martyrium was built in Simeon's honor on this site. It consisted of four basilicas radiating from the sides of a central octagon, within which was enshrined the famous column.

The 5,000 square meters of floor space was nearly equal to that of the Hagia Sophia in Constantinople. Yet, quite unlike Hagia Sophia, the Church of St. Simeon was (and is) perched atop a barren hill 60 km from the nearest city. But it was not isolated: the church was only one part of a huge, walled complex that included a monastery, two lesser churches, and several large hostels.

St. Simeon's pillar can still be seen in the center of the courtyard, although it is now only a 2 meter-high boulder due to centuries of relic-gathering by pilgrims. The courtyard is surrounded by four basilicas on a cruciform plan.

The east basilica is slightly larger than the others; it was the most important and held all the major ceremonies. Adjacent to the south wall of the eastern basilica is the chapel and the monastery.

Opposite the southern basilica is the baptistery, which was built a little after the main church but is an important part of the pilgrimage complex. To the west of the baptistery is the processional route that leads towards Deir Samaan.

Tips & Hints
Arrange By:
Popular first New first
There are no tips nor hints for Church of Saint Simeon Stylites yet. Maybe be you will be the first one to post useful information for fellow travellers? :)
6.4/10
1,026 people have been here
I've been here
Add to wishlist 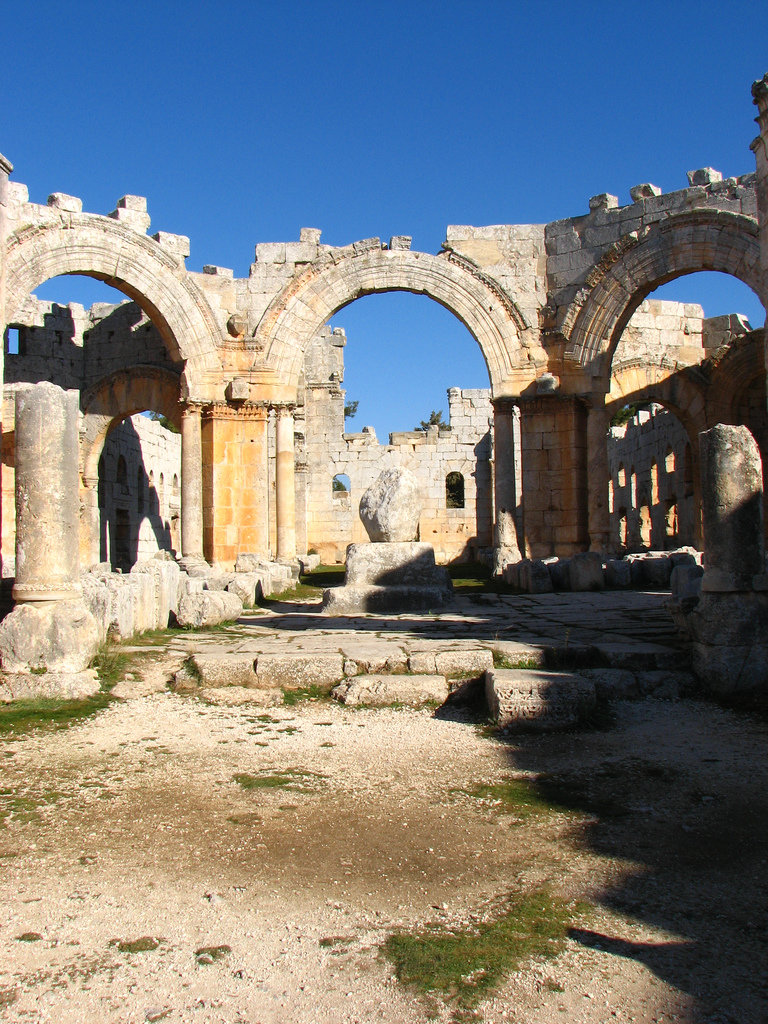 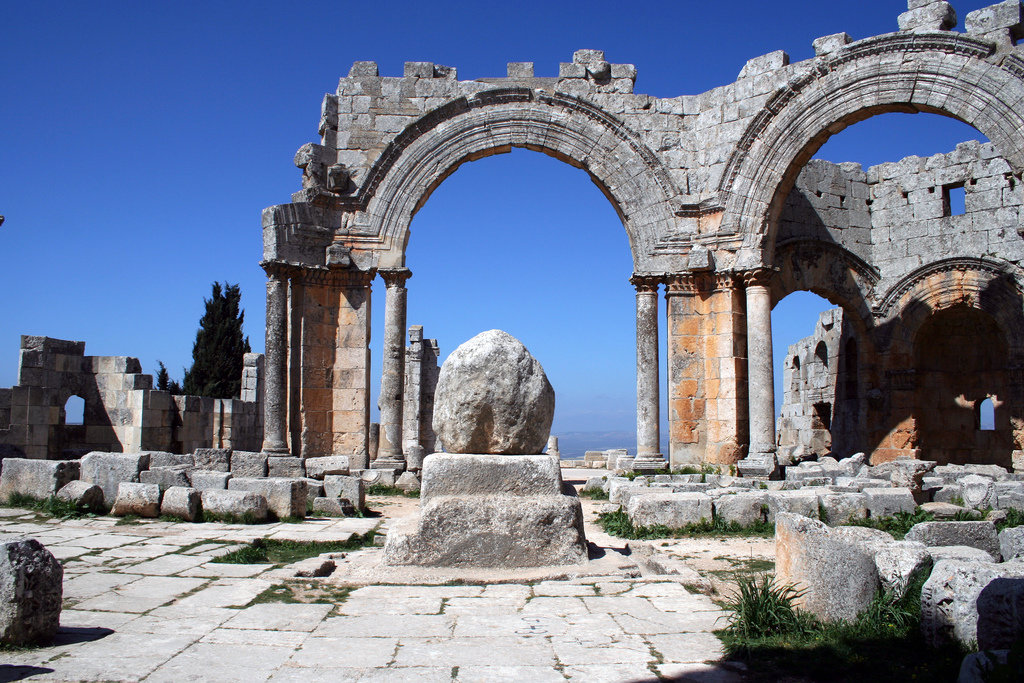 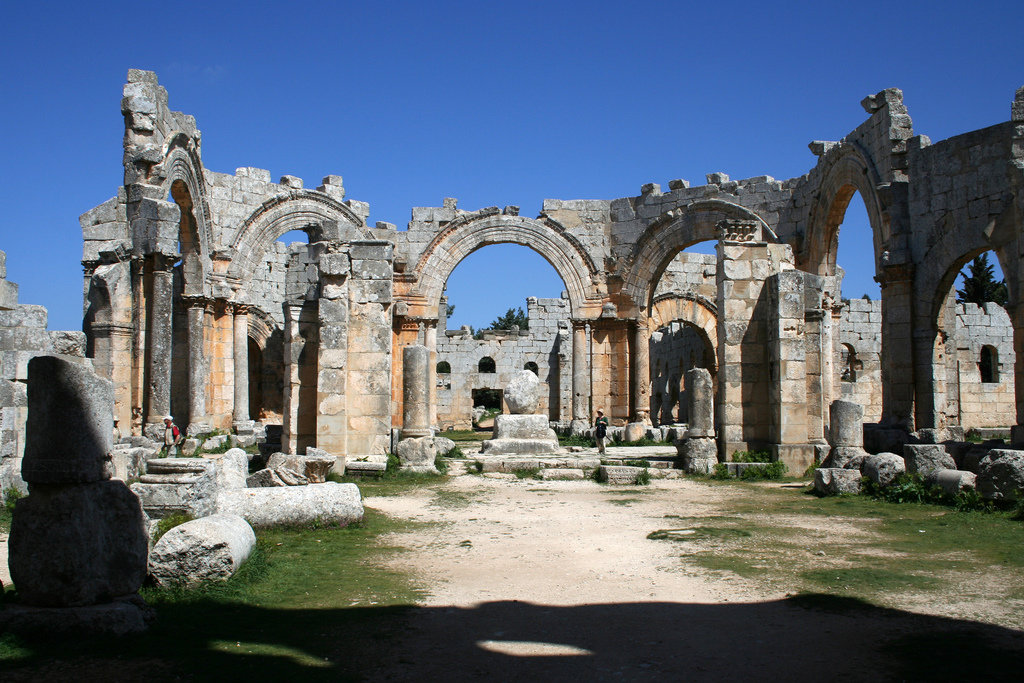