×
What are you looking for?
See all results
Religious places in Rome 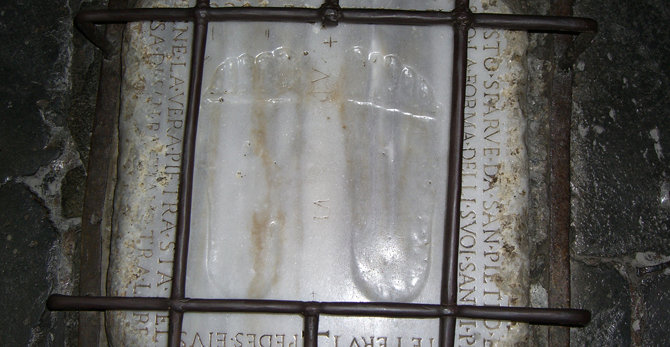 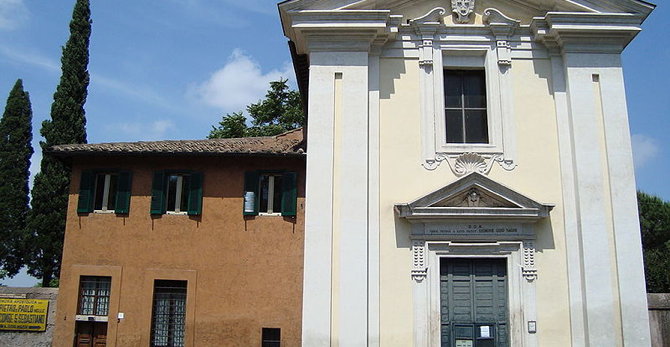 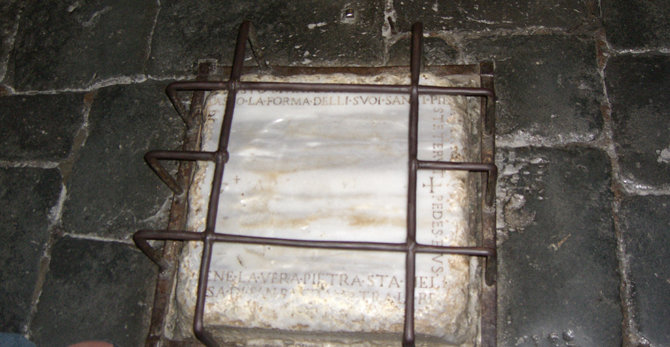 The Church of St Mary in Palmis (italiano. Chiesa di Santa Maria delle Piante, Latina. Sanctae Maria in Palmis), better known as Chiesa del Domine Quo Vadis, is a small church southeast of Rome. It is located about 800 m from Porta San Sebastiano St. Sebastian Gate, where the Via Ardeatina branches off the Appian Way.

It is at this spot that Saint Peter traditionally met Jesus while the former was fleeing persecution in Rome. According to the apocryphal Acts of Peter, Peter asked Jesus, Шаблон:Lang (English. Lord, where are you going?) Jesus answered Шаблон:Lang (English. I am going to Rome to be crucified again).

There has been a sanctuary on the spot since the 9th century, but the current church is from 1637. The current façade was added in the 17th century.

It has been supposed that the sanctuary might have been even more ancient, perhaps a Christian version of some already existing temple: the church is in fact located just in front of the sacred Campus dedicated to Rediculus, the "God of the return" (his name comes from the Latin verb redire = to come back, and should not be confused with the word ridiculus = laughable); this campus hosted a sanctuary for the cult of the deity that received devotion by travellers before their departure, especially by those who were going to face long and dangerous journeys to far places like Egypt, Greece or the East. Those travellers who returned also stopped to thank the god for the happy outcome of their journey.

The position of the sanctuary in Campus Rediculi was not accidental, first of all because the ancient Appian way was the most important among the Roman "consular" roads, secondarily because from this location the traveller could take a last look to the walls of Rome. In the sacred field there was also the tomb of a famous talking crow, buried at the time of Emperor Tiberius with a great popular funeral. Besides, the god Rediculus had a terrible reputation: a legend states that Hannibal, after the Battle of Cannae, arrived in front of the gates of Rome following this road; here the god appeared to him in a frightful way, in order to suggest retreating with all his army. This legend implies that the ancient Romans held Rediculus in deep consideration. At the moment archeologists still do not know with precision where exactly the sanctuary was; however an error by some authors of 17th century caused many commonly to think still today that the temple of Rediculus was the sepulchre also said to be of Annia Regilla, toward the inner side of the Caffarella park.

The presence of the Apostle Peter in this area, where he is supposed to have lived, appears to be confirmed in an epigraph in the catacombs of Saint Sebastian, that says, "Domus Petri" (House of Peter). An epigram by Pope Damasus I (366-384), in honor of Peter and Paul, reads: "You that are looking for the names of Peter and Paul, you must know that the saints have lived here".

The two footprints on a marble slab at the center of the church (copy of a relief conserved in the nearby basilica of San Sebastiano) would be the miraculous sign left by Jesus: it is actually a draft of an "ex voto" paid for the good outcome of a journey, would seem to confirm the supposition that some connection might link the two temples.

The real name of the church, very little known, indeed, is Chiesa di Santa Maria in Palmis, where palmis refers to the soles of Jesus' feet.

The Roman Catholic Church admits the legend, after Pope Innocent III declared the fact was true; his decree is included in the Decretali di Gregorio IX, book IV, tit. 17, cap. Per Venerabilem.

There was an inscription above the front door on the façade which used to say: "Stop your walking, traveller, and enter this sacred temple in which you will find the footprint of our Lord Jesus Christ when He met with St. Peter who escaped from the prison. An elemosina for the wax and the oil is recommended in order to free some spirits from Purgatory". Pope Gregory XVI found it so inappropriate (effectively being a sort of advertisement) that he ordered its removal in 1845.

From the apocryphal Acts of Peter: Шаблон:Cquote

The precise address is: Via Appia Antica, 51.

Porta San Sebastiano is the modern name for the ancient Porta Appia, a

The Aurelian Walls (italiano. Mura aureliane) is a line of city walls 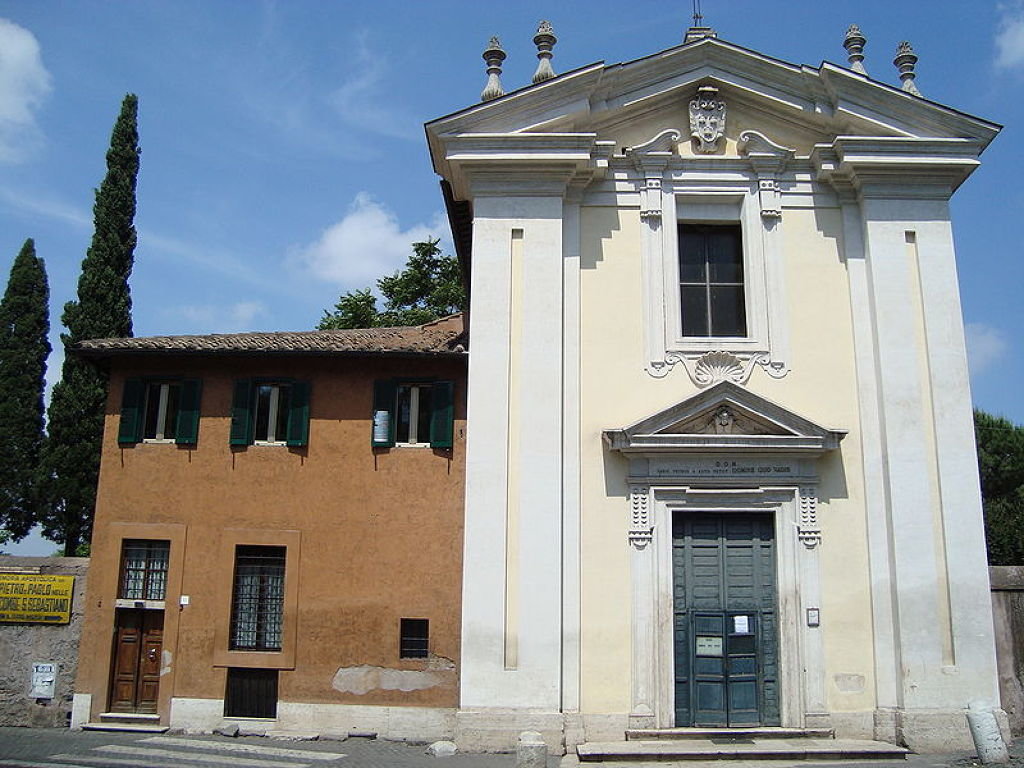 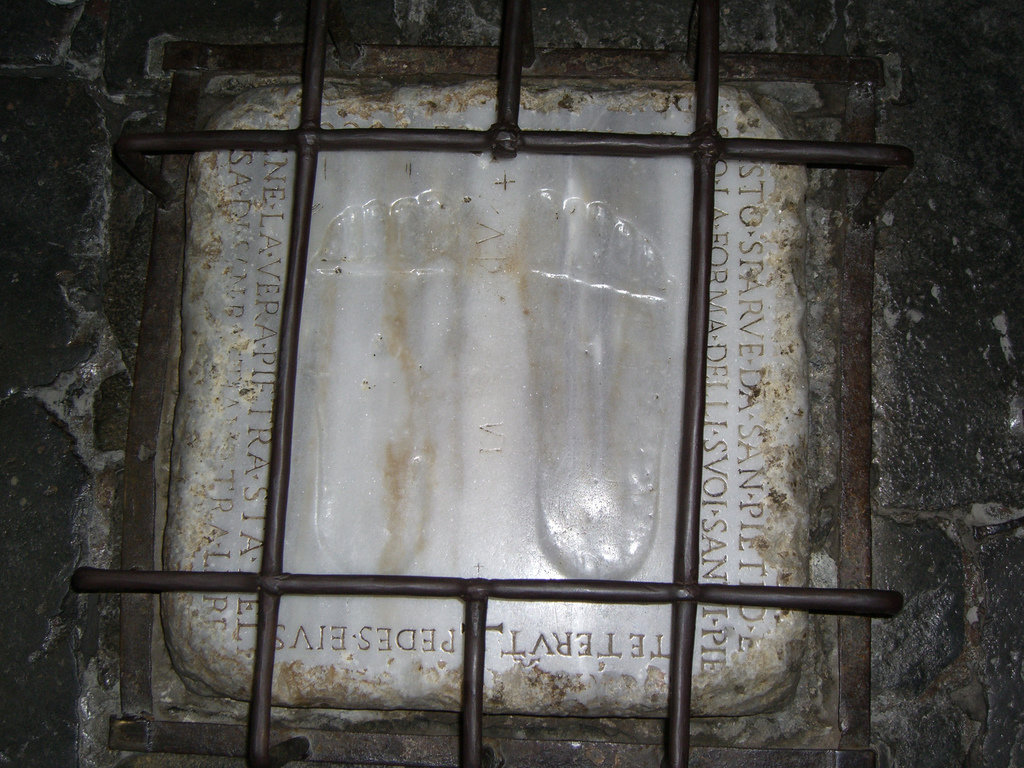 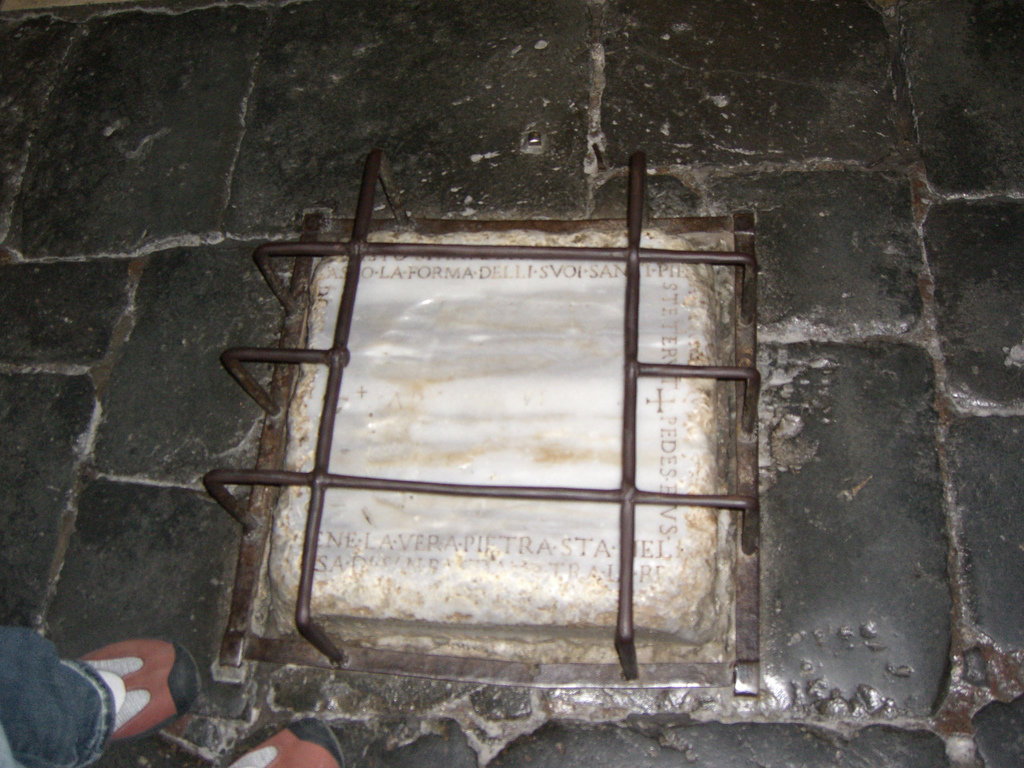 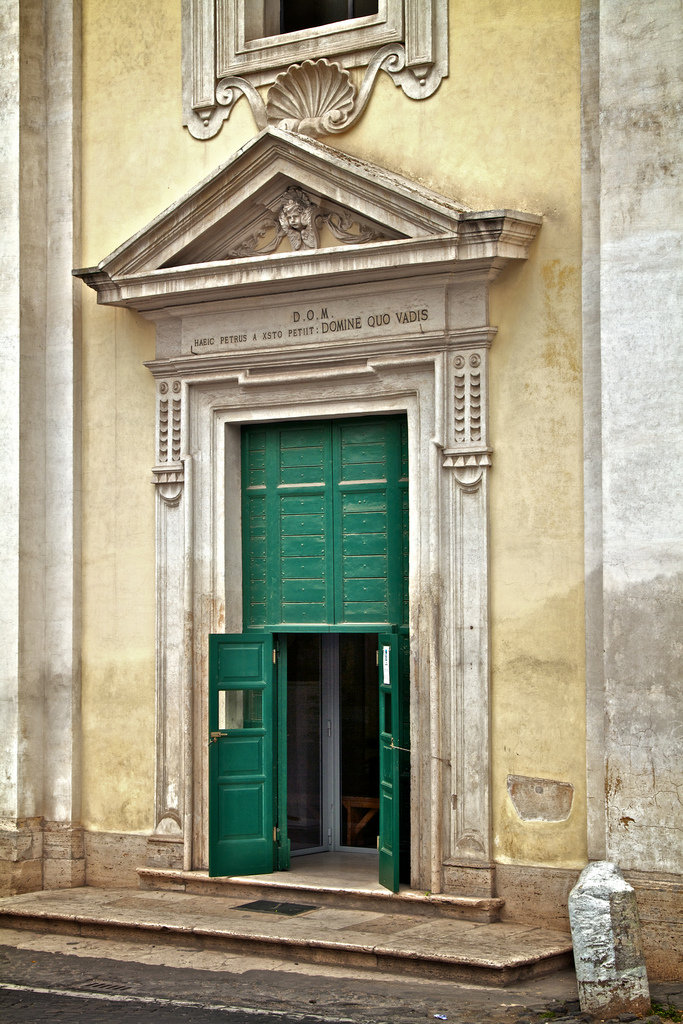 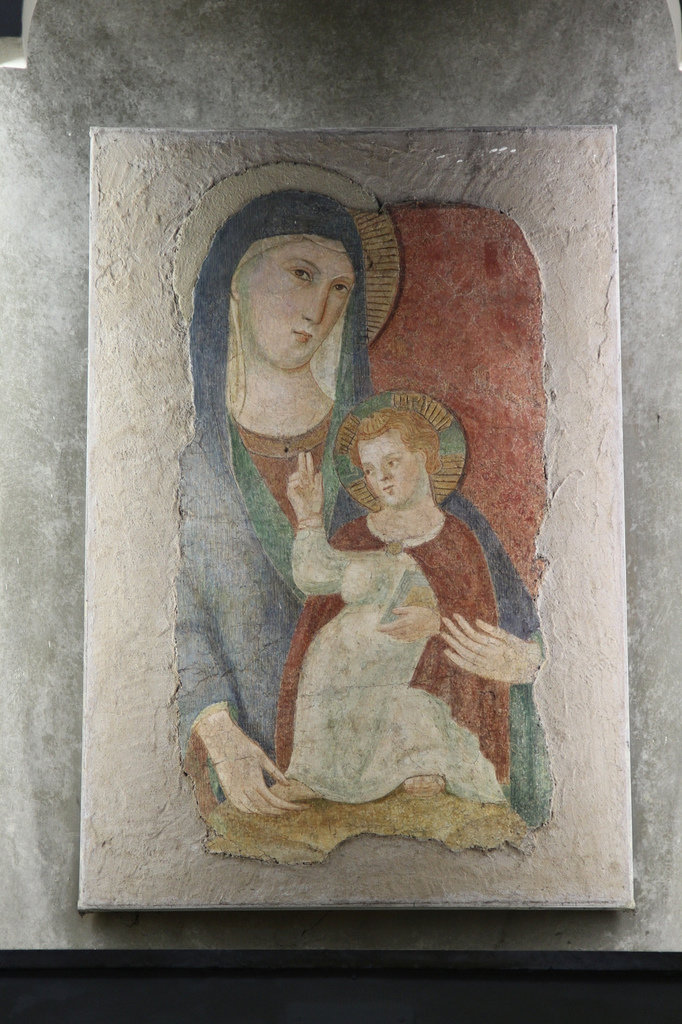 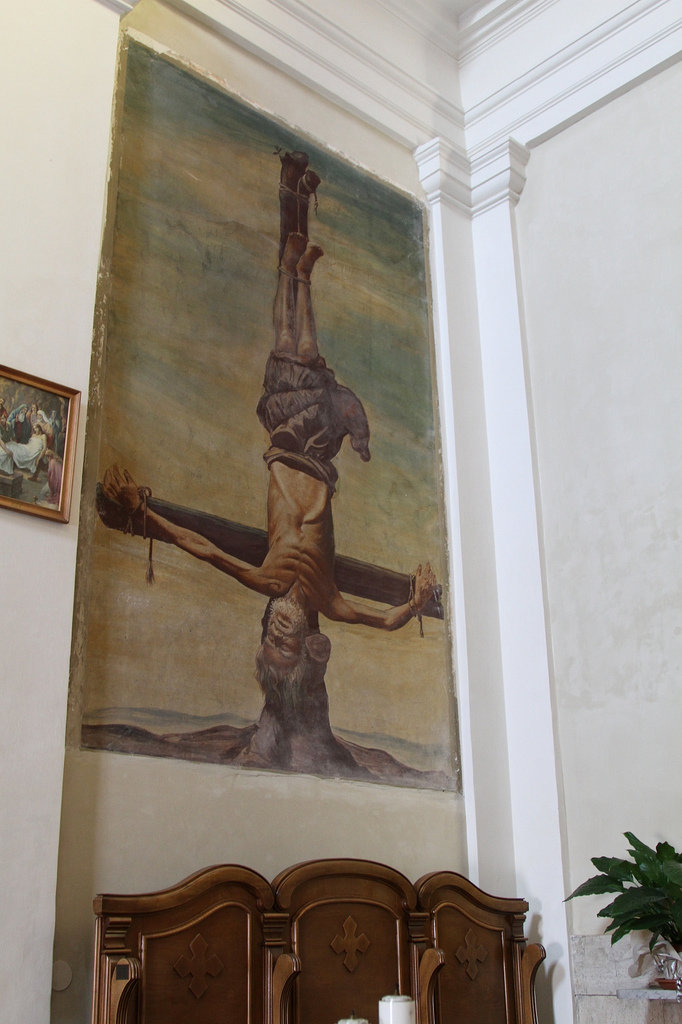 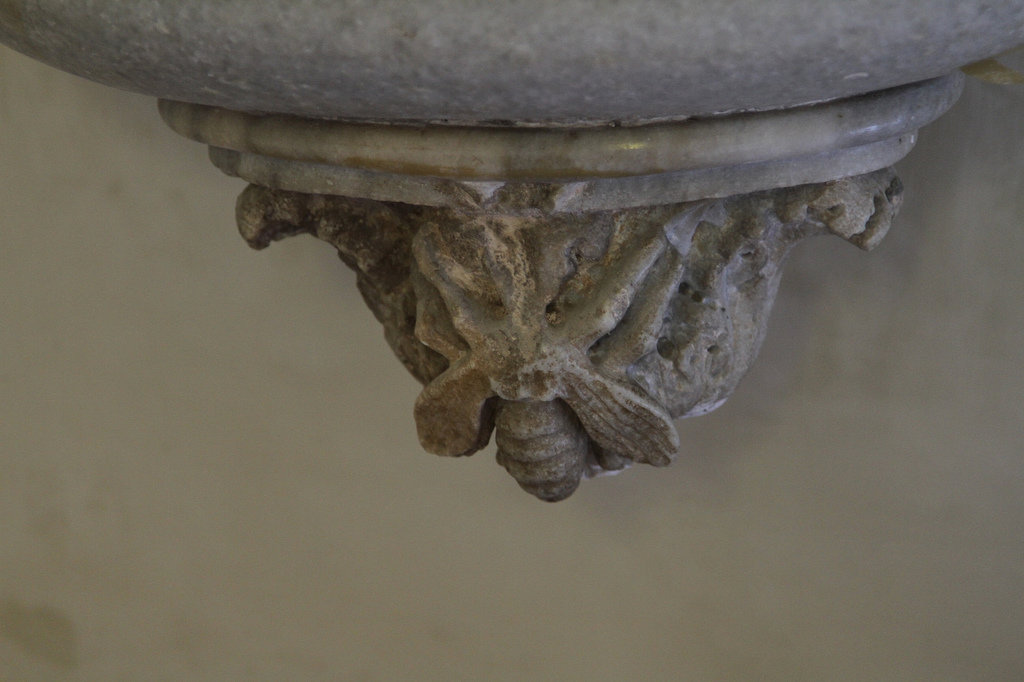 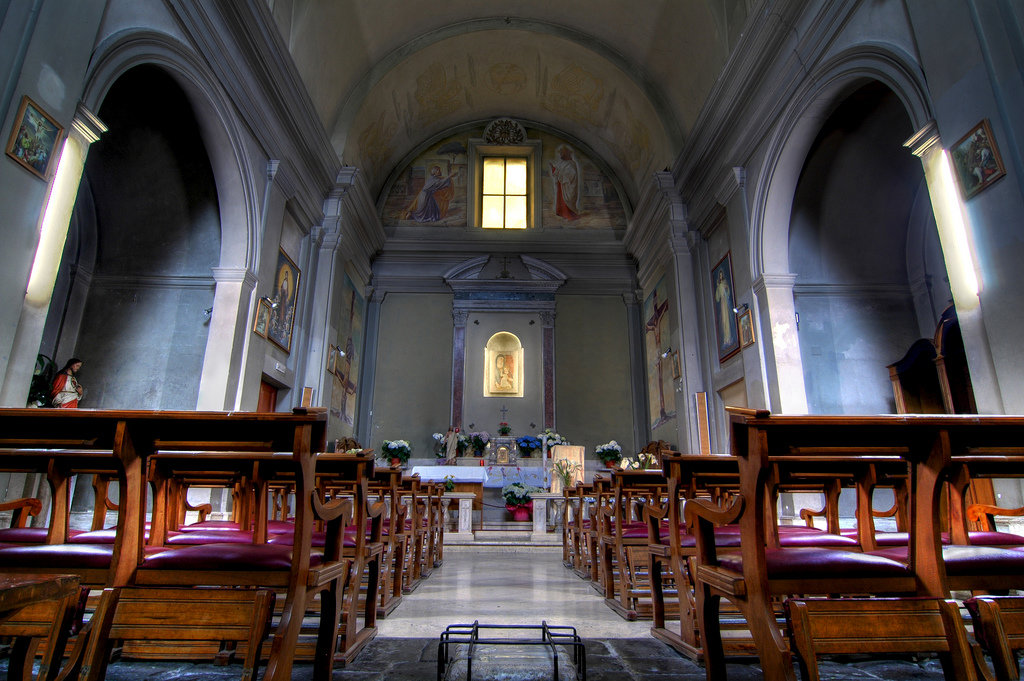 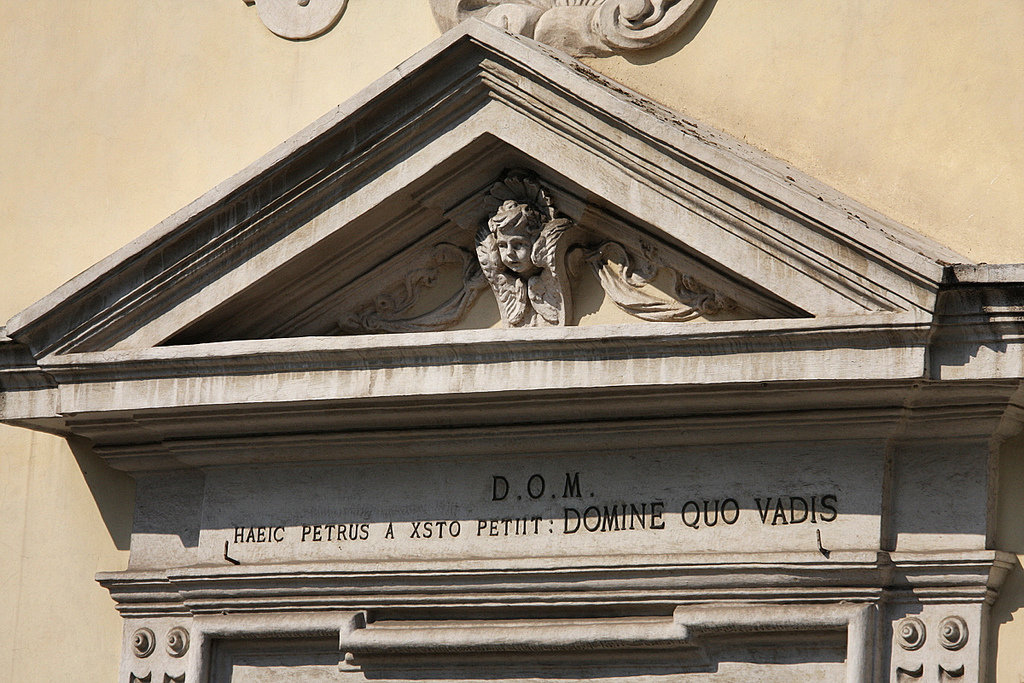 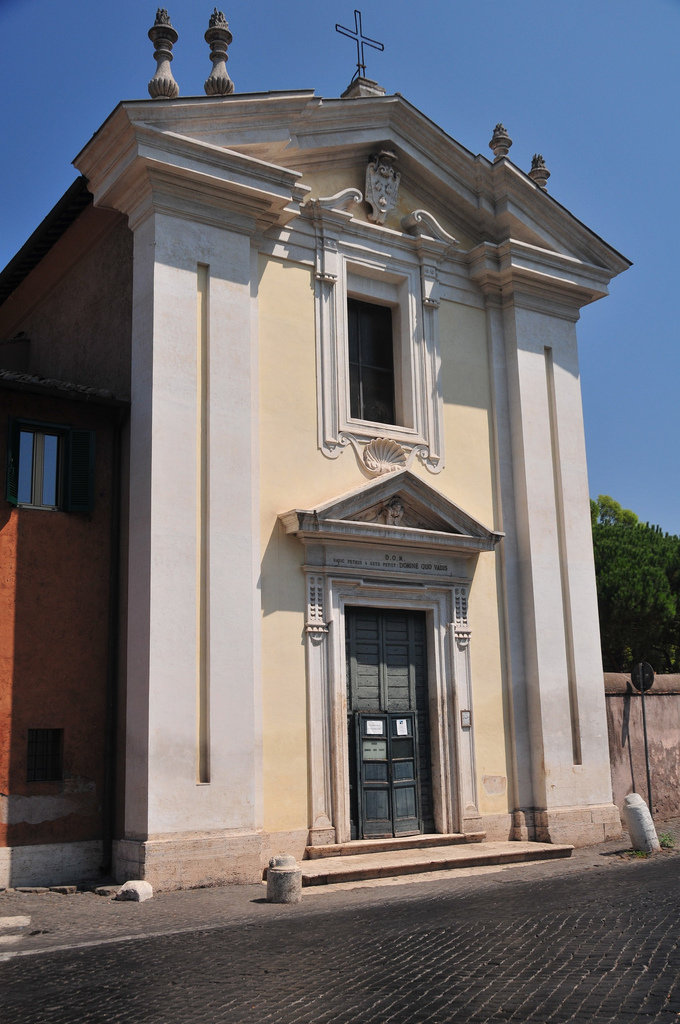 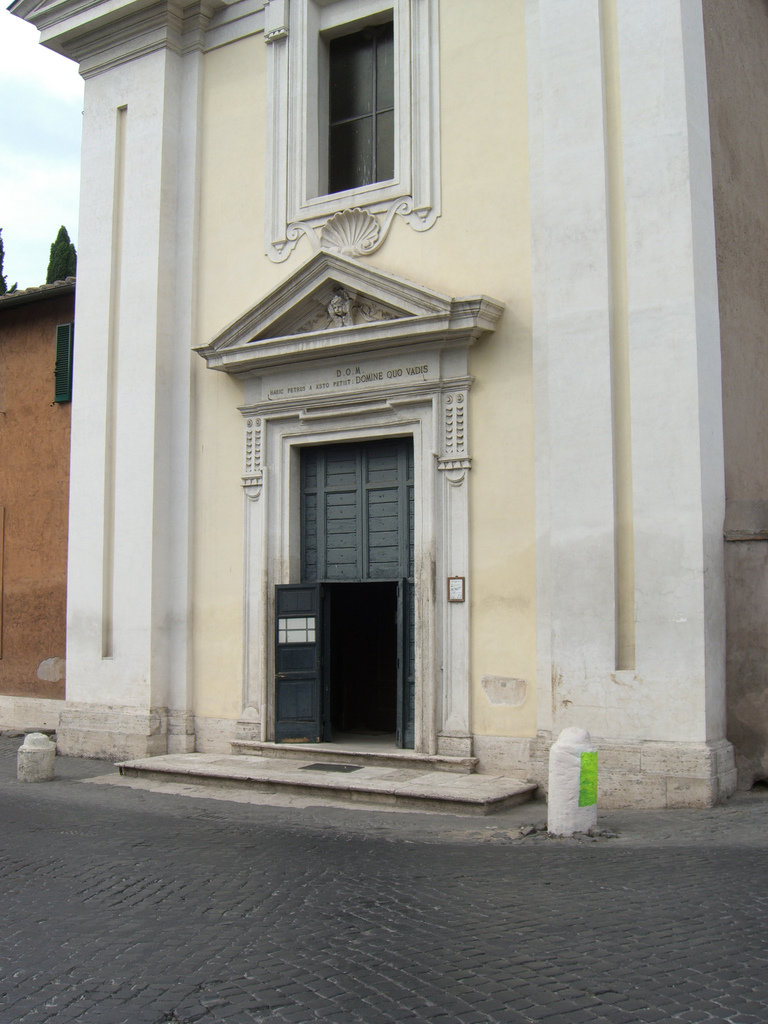 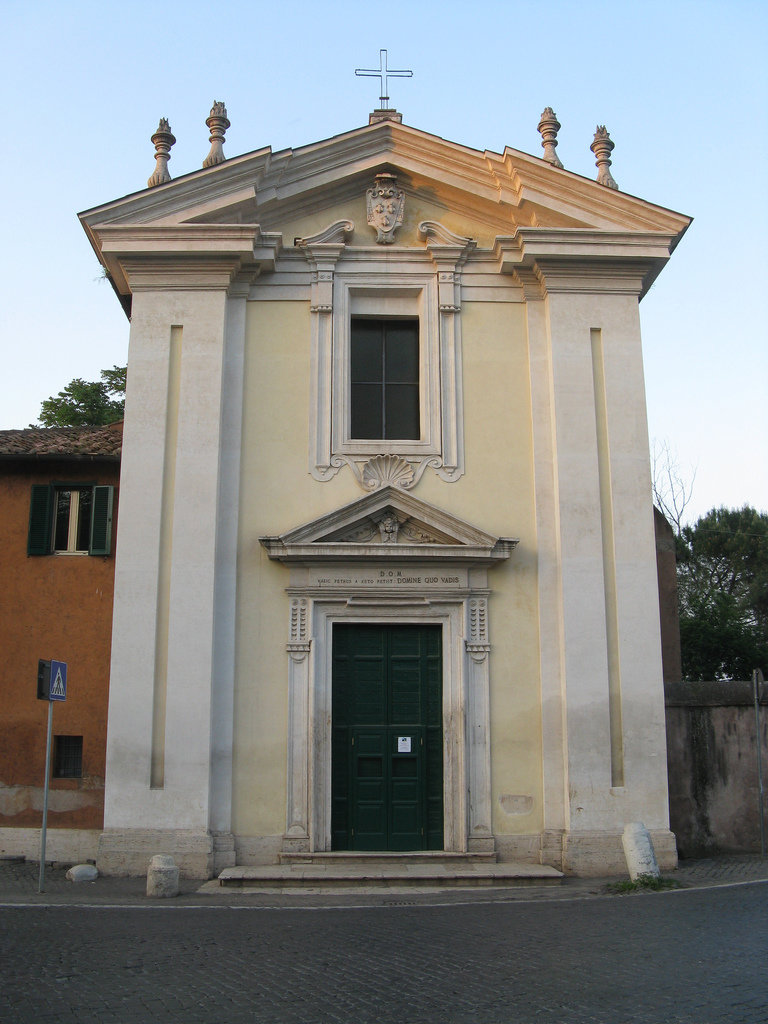 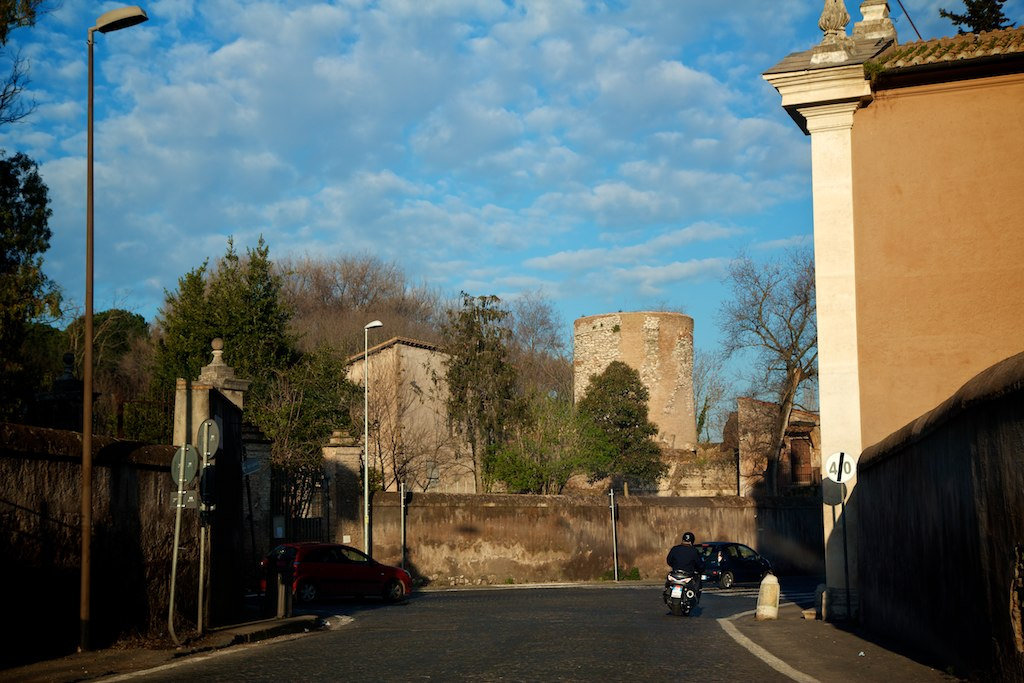 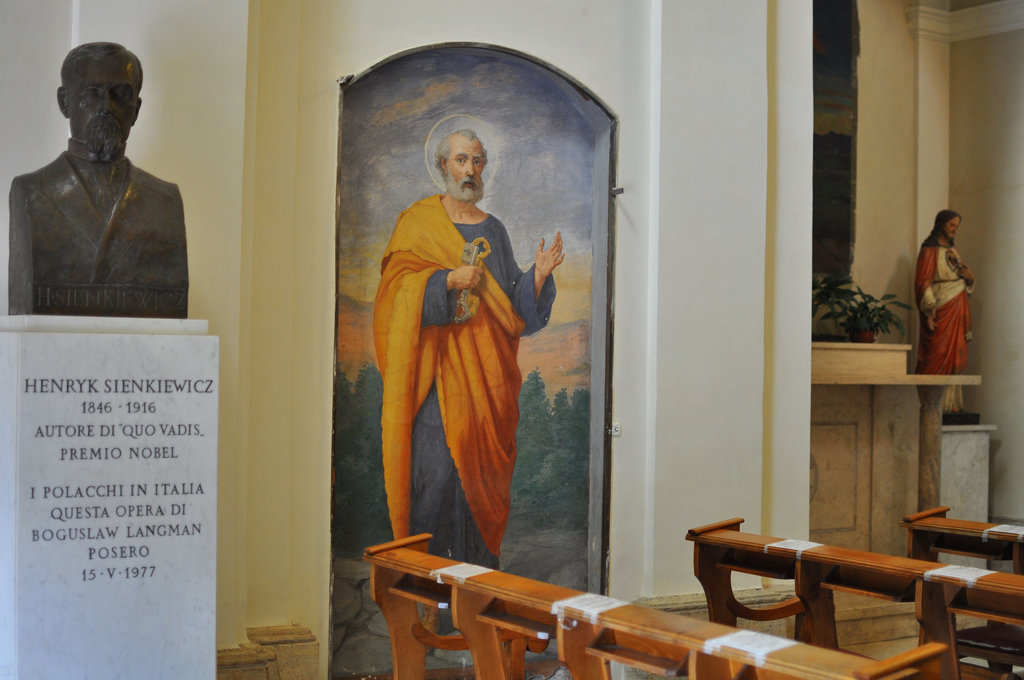 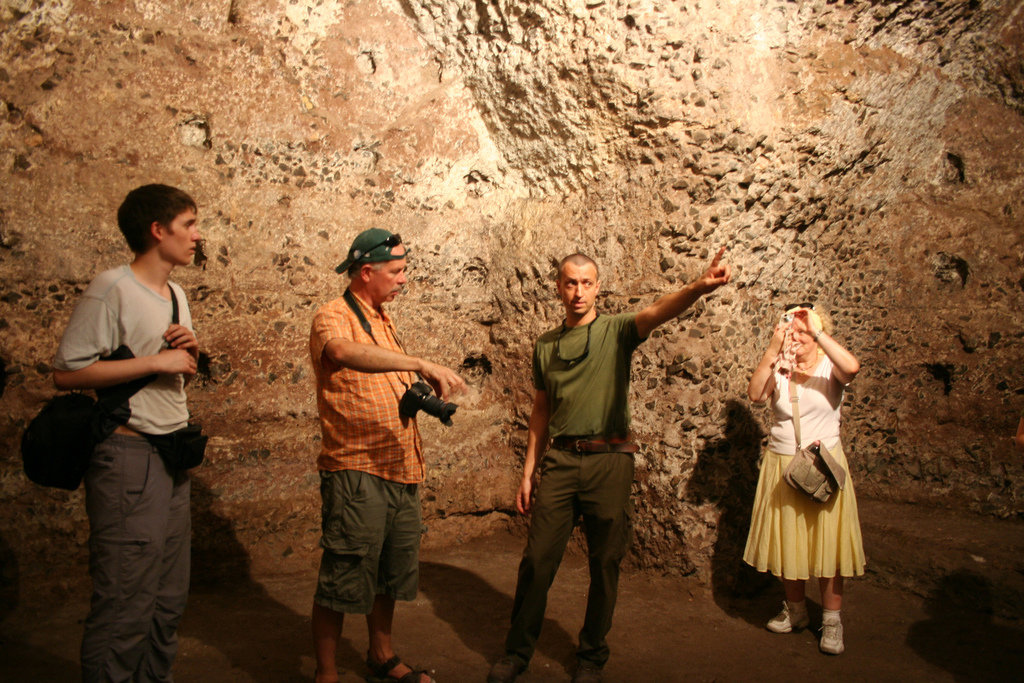 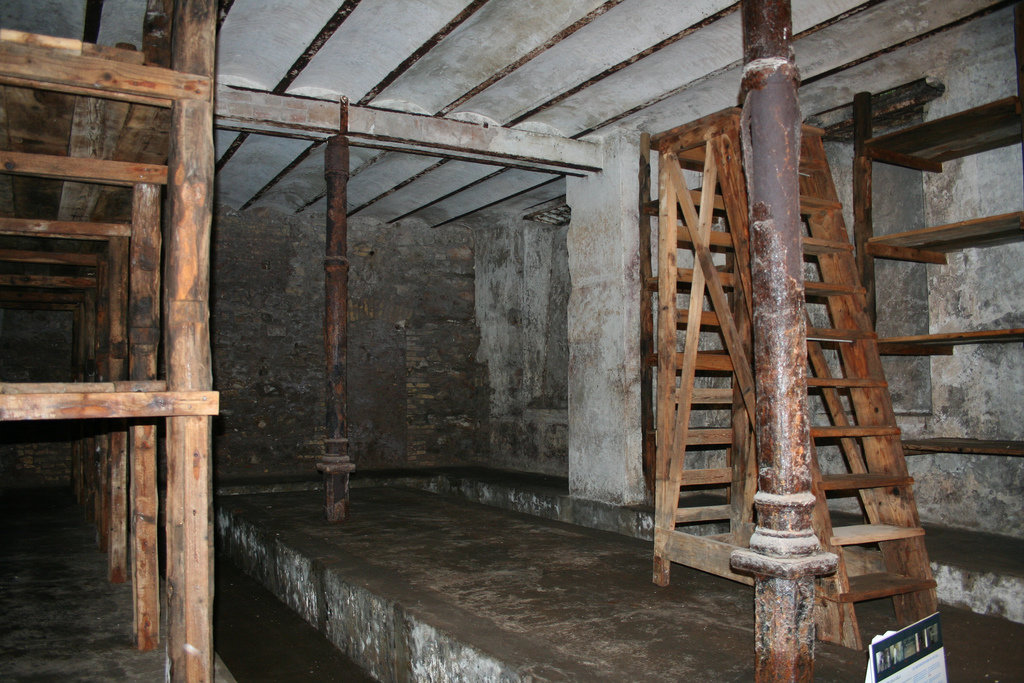 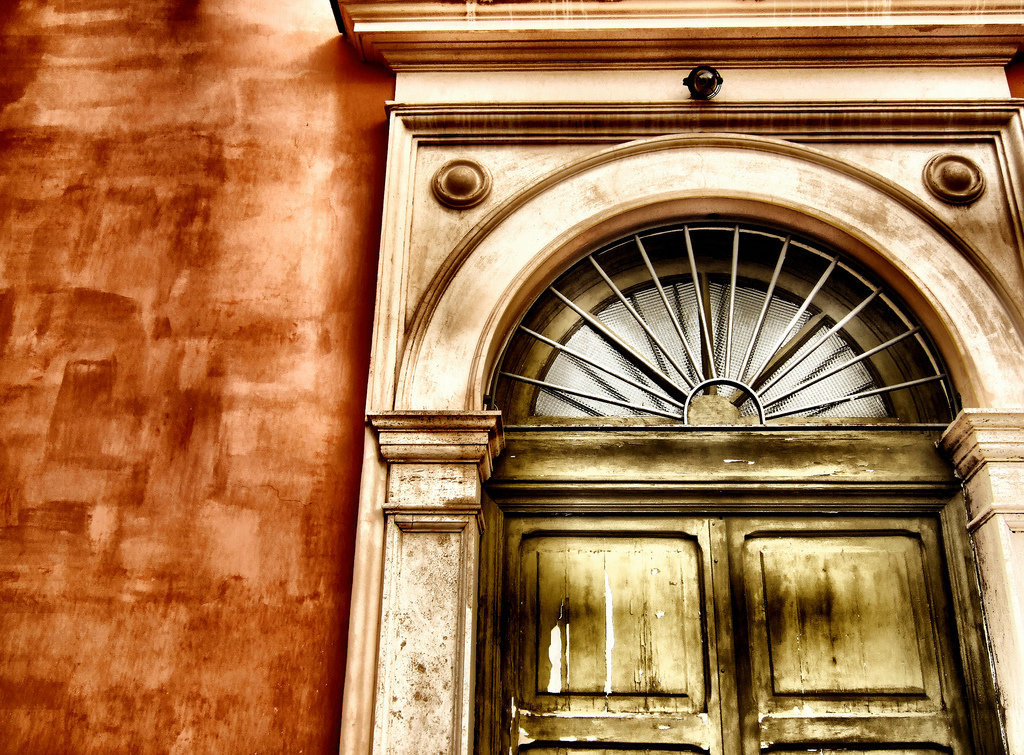