×
What are you looking for?
See all results
Religious places in Certosa di Pavia 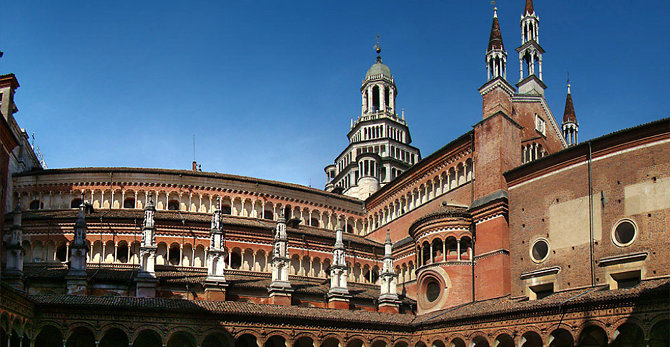 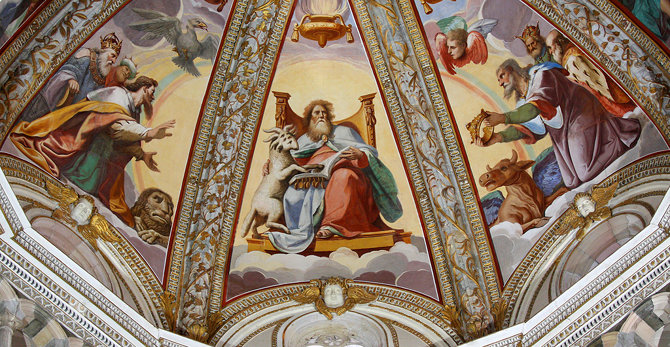 The Certosa di Pavia ("Charterhouse of Pavia") is a monastery complex in Lombardy, northern Italy, situated near a small town of the same name in the Province of Pavia, 8 km north of Pavia. Built in 1396-1495, It was once located on the border of a large hunting park belonging to the Visconti family of Milan, of which today only scattered parts remain.

Certosa is the Italian name for a house of the cloistered monastic order of Carthusians founded by St. Bruno in 1044 at Grande Chartreuse. Though the Carthusians in their early centuries were known for their seclusion and asceticism and the plainness of their architecture, the Certosa is renowned for the exuberance of its architecture, in both the Gothic and Renaissance styles, and for its collection of artworks which are particularly representative of the region.

Gian Galeazzo Visconti, hereditary lord and first Duke of Milan, commissioned the building of the Certosa to the architect Marco Solari, inaugurating the works and laying the foundation stone on August 27, 1396, as recorded by a bas-relief on the facade. The location was strategically chosen midway between Milan and Pavia, the second city of the Duchy, where the Duke held his court.

The church, the last edifice of the complex to be built, was to be the family mausoleum of the Visconti. It was designed as a grand structure with a nave and two aisles, a type unusual for the Carthusian Order. The nave, in the Gothic style, was completed in 1465.

However, since the foundation, the Renaissance had spread in Italy, and the rest of the edifice was built according to the new style, redesigned by Giovanni Solari continued by his son Guiniforte Solari and including some new cloisters. Solari was followed as director of the works by Giovanni Antonio Amadeo, (1481-1499). The church was consecrated on May 3, 1497. The lower part of the façade was not completed until 1507.

The construction contract obliged the monks to use part of the revenue of the lands held in benefice to the monastery to continue to improve the edifice. Consequently, the Certosa includes a huge collection of artworks of all centuries from the 15th to the 18th.

In 1782, the Carthusians were expelled by the Emperor Joseph II of Austria, and were succeeded at the Certosa by the Cistercians in 1784 and then by the Carmelites in 1789. In 1810 the monastery was closed until the Carthusians reacquired it in 1843. In 1866 it was declared a National Monument and sequestrated by the Italian State, although some Benedictines resided there until 1880. The monks currently living in the monastery are Cistercians admitted to it in the 1960s.

The church is built on a Latin cross plan, with a nave, two aisles and transept, typical of Gothic architecture. The chancel terminates with an apse. It is covered by crossed vaults on Gothic arches and is inspired, on a reduced scale, by the Duomo of Milan. The vaults are alternatively decorated with geometrical shapes and starry skies. The transept and the main chapel end with square-plan chapels with smaller, semi-circular apses on three sides.

The façade of the church is famous for its exuberant decorations, typical of Lombard architecture, every part being decorated with reliefs, inlaid marble and statues. Sculptors who worked on it include Cristoforo Mantegazza and Giovanni Antonio Amadeo himself. In addition to applied sculpture, the facade itself has a rich sculptural quality because of the contrast between richly textured surfaces, projecting buttresses, horizontal courses and arched openings, some of which are shadowed, while those in the small belfries are open to the sky.

The sober form of the roughly finished brick front can be seen in a fresco by Ambrogio Bergognone in the apse of the right transept, painted in 1492-1495, when work was commencing on the new facade, portraying Gian Galeazzo Visconti offering the model of the Certosa to the Blessed Virgin. Its profile, with roofs on three levels, has been compared to the churches of San Giovanni in Monza and San Petronio in Bologna; among the architects in close correspondence at all three projects, Borlini ascribes the form of the original facade at the Certosa to Giacomo da Campione, who was working at Pavia while his uncle Matteo was completing San Giovanni in Monza.

The architect Giovanni Solari, in building the double row of arcades down the flanks of the church, modified its appearance. After his death he was succeeded in Pavia by his son Guiniforte Solari, but work came to a halt with the death of Guiniforte in 1478.

In 1492 Giacomo Antonio Dolcebono took up the construction, assisted on site, for he was cocurrently occupied with the cathedrals at Pavia and at Milan and other churches, by his inseparable collaborator on both cathedrals, Giovanni Antonio Amadeo. In their hands the project was thoroughly redesigned. Scores of artists were involved. The classicist style portal is by Benedetto Briosco (1501). The porch has a large arch of classicist form resting on paired Corinthian columns which are each surmounted by a very strongly modelled cornice on which the arch rests, the construction being derived from the Classical, used by Brunelleschi, and employed here for a bold and striking effect. The decoration is of bas-reliefs illustrating the History of the Certosa. Above the central arch is a shallow balcony of three arches, above which rises the central window.

This campaign was interrupted in 1519 as work was going forward by the condition of French occupation in Lombardy after the War of the League of Cambrai. French troops were encamped round the Certosa. Notations of work on the facade did not resume until 1554, when a revised design under the direction of Cristoforo Lombardo was approved for the completion of the facade above the second arcade; there marble intarsia was substituted for the rich sculptual decorations of the lower area. Some final details were added by Galeazzo Alessi.

In the main apse of the church is a fresco by Bergognone celebrating the Incoronation of Mary between Francesco and Ludovico Sforza. Other frescoes with saints and prophets were executed by Lombard artists, including a young Bernardino Zenale.

The Certosa has painted masterpieces by Bergognone including the panels of St. Ambrose (1490), and San Siro (1491) and, most significantly, the Crucifixion (1490). Other works by Bergognone are now found in other museums of Europe.

Other paintings in the church include a Holy Father, remnant of a polyptych by Perugino and panels by Giovanni Battista Crespi, Il Morazzone, Guercino, Francesco Cairo and Daniele Crespi.

In the southern transept is the tomb of Gian Galeazzo Visconti, begun in 1494-1497 by Giovanni Cristoforo Romano and Benedetto Briosco, but completed only in 1562. The northern transept houses the tomb of Ludovico Sforza ("The Moor"), 7th Duke of Milan, and his wife Beatrice d'Este. The sculptures on the tomb were carried here in 1564 from the Milanese church of Santa Maria delle Grazie, the statues generally being considered the masterwork of Cristoforo Solari.

Stained glass and other works

The Certosa possesses an important collection of stained glass windows, executed to cartoons by masters active in Lombardy in the 15th century, including Zanetto Bugatto, Vincenzo Foppa, Bergognone and Hans Witz.

There are many notable decorative sculptural works which include the carved wooden choir stalls, the marble altar frontals and the bronze candelabra by Annibale Fontana. Also notable is the high altar from the late 16th century. The crypt sacristy contains, among other treasures, a triptych in ivory and hippopotamus' ivory by Baldassarre degli Embriachi, donated by Gian Galeazzo Visconti.

An elegant portal, with sculptures by the Mantegazza brothers and Giovanni Antonio Amadeo, leads from the church to the Small Cloister (in Italian: Chiostro Piccolo.) This has a small garden in the center. The most striking feature is the terracotta decoration of the small pilasters, executed by Rinaldo de Stauris between 1463 and 1478. Some arcades are decorated by frescoes by Daniele Crespi, now partially ruined. Also noteworthy is the late-14th century lavabo in stone and terracotta, with scenes of the Jesus with the Woman of Samaria at the Well.

Similar decorations also characterize the Grand Cloister (Italian: Chiostro Grande), which measures c.125x100 meters. The elegant cells of the monks open to the central garden. The arcades have columns with precious decorations in terracotta, with tondoes portraying saints, prophets and angels, alternatively in white and pink Verona marble. There were once also paintings by Vincenzo Foppa, now disappeared.

The New Sacristy contains a vivid cycle of frescoes by the Sorri brothers, belonging to the late Senese Mannerism. The walls have paintings by Francesco Cairo, Camillo Procaccini, il Passignano and Giulio Cesare Procaccini, while the altarpiece of 1524 was begun by Andrea Solario, later completed by Bernardino Campi.

Also notable is the refectory, initially used as church during the construction, which has maintained a fresco with the Last Supper by Ottavio Semino, 1567 and, in the vault, a Madonna with Child and Prophets by Bergognone. In the Foresteria or Palazzo Ducale, built in the 17th century by Francesco Richino, are frescoes and paintings by Vincenzo and Bernardino Campi, Bartolomeo Montagna, Bergognone and Bernardino Luini.

La Chartreuse de Parme by Stendhal (Marie-Henri Beyle) is a novel, published in 1839, that rendered its author at last famous throughout Europe. Parma is about 109 km far away from Pavia. The charterhouse the book refers to is probably the Valserena abbey of Paradigna, located in the surroundings of Parma.

See all hotels See all
Lab42

Castle Visconteo is a castle built in the town of Pavia, Lombardy,

Add to wishlist
I've been here
Visited
Basilica of Sant'Eustorgio

The Basilica of Sant'Eustorgio is a church in Milan, northern Italy,

The Basilica di San Calimero is a church in Milan, northern Italy.

Canons Ashby Priory was an Augustinian monastic establishment in

Bardney Abbey in Lincolnshire, England, was a Benedictine monastery

San Zeno is a church and an abbey in Pisa, Tuscany, Italy. 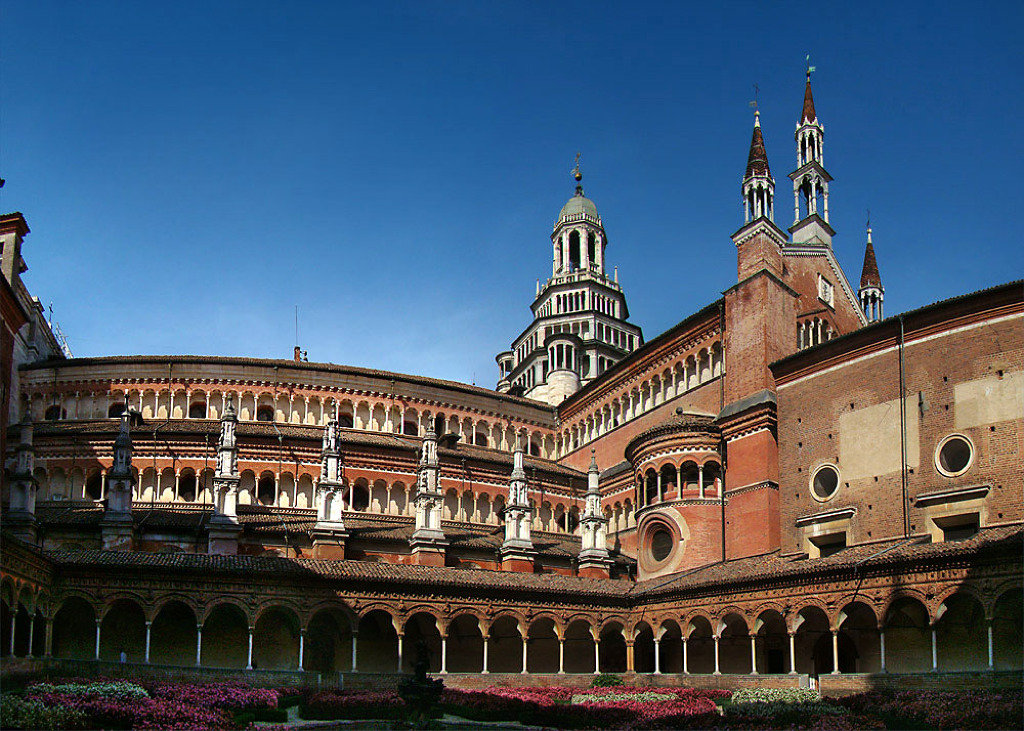 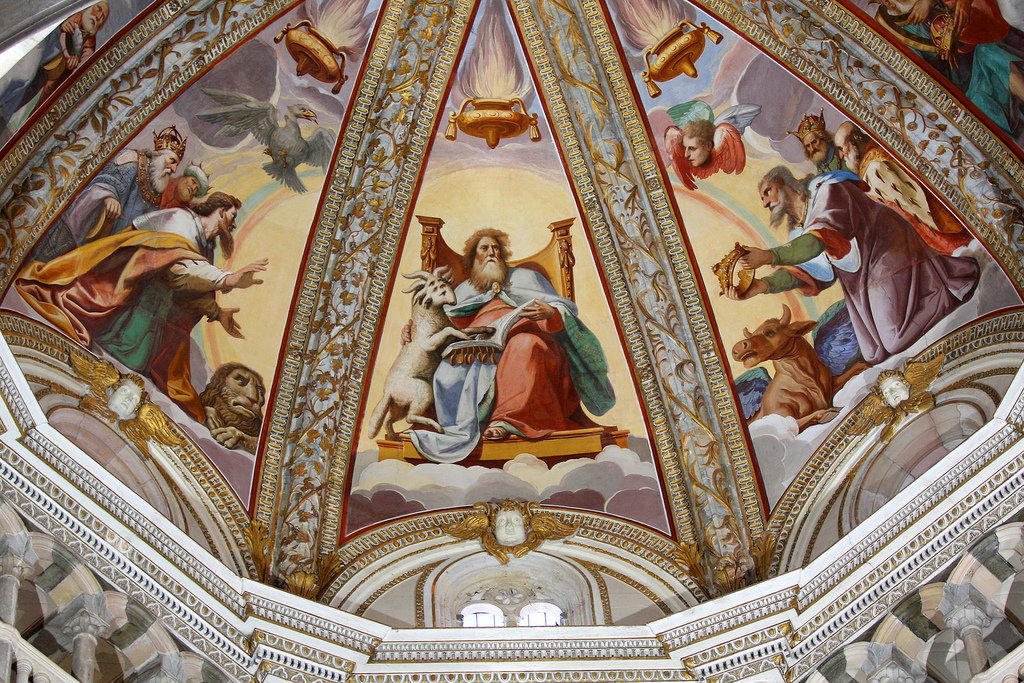