×
What are you looking for?
See all results
Anglican cathedrals in New York 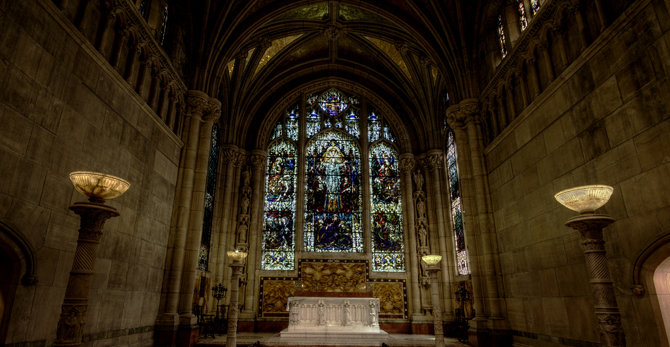 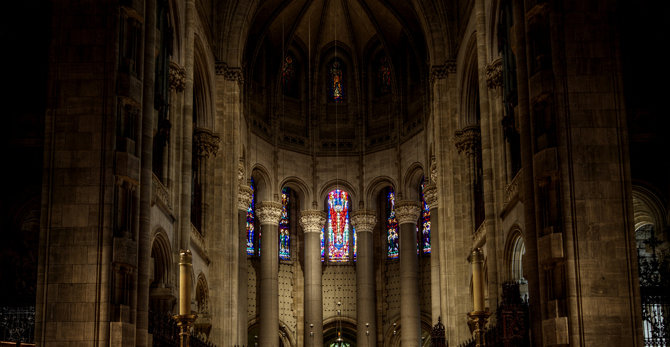 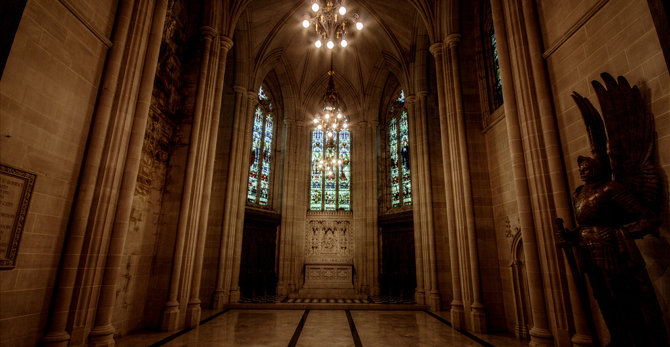 The Cathedral of St. John the Divine, officially the Cathedral Church of Saint John the Divine in the City and Diocese of New York, is the Cathedral of the Episcopal Diocese of New York. Located at 1047 Amsterdam Avenue New York, NY 10024 (between West 110th Street, which is also known as "Cathedral Parkway", and 113 Street) in Manhattan's Morningside Heights, the cathedral is claimed to be the largest Cathedral and Anglican church and fourth largest Christian church in the world (although the title is disputed with Liverpool Anglican Cathedral). The inside covers more than half a city block, with 121,000 sq ft (11,200 m2), spanning a length of 183.2 meters (601 ft) and height 70.7 meters (232 ft). The inside height of the nave is 37.8 meters (124 feet).

The cathedral is nicknamed St. John the Unfinished, and The White Elephant Of The Upper West Side.

The cathedral, designed in 1888 and begun in 1892, has, in its history, undergone radical stylistic changes and the interruption of the two World Wars. Originally designed as Byzantine-Romanesque, the plan was changed after 1909 to a Gothic design. After a large fire on December 18, 2001, it was closed for repairs and reopened in November 2008. It remains unfinished, with construction and restoration a continuing process.

In 1887 Bishop Henry Codman Potter of the Episcopal Diocese of New York called for a cathedral to rival St. Patrick's Cathedral in Manhattan. A 11.5-acre (4.7 ha) property, on which the Leake and Watts Orphan Asylum had stood, was purchased by deed for the cathedral in 1891. After an open competition, a design by the New York firm of George Lewis Heins and C. Grant LaFarge in a Byzantine-Romanesque style was accepted the next year.

Construction on the cathedral was begun with the laying of the cornerstone on December 27, 1892, St. John's Day. The foundations were completed at enormous expense, largely because bedrock was not struck until the excavation had reached 72 feet (22 m).[] The first services were held in the crypt, under the crossing in 1899.[] After the large central dome made of Guastavino tile was completed in 1909, the original Byzantine-Romanesque design was changed to a Gothic design. Increasing friction after the premature death of Heins in 1907 ultimately led the Trustees to dismiss the surviving architect, Christopher Grant LaFarge, and hire the noted Gothic Revival architect Ralph Adams Cram to design the nave and "Gothicize" what LaFarge had already built.[] In 1911, the choir and the crossing were opened, and the foundation for Cram's nave began to be excavated in 1916.[]

The first stone of the nave was laid and the west front was undertaken in 1925. The Cathedral was opened end-to-end for the first time on November 30, 1941, a week before the bombing of Pearl Harbor. Subsequently construction on the cathedral was halted, because the then-bishop felt that the church's funds would better be spent on works of charity, and because America's subsequent involvement with the Second World War greatly limited available manpower.[] Although Cram intended to dismantle the dome and construct a massive Gothic tower in its place, this plan was ultimately never realized.[] The result is that the Cathedral reflects a hodgepodge of architectural styles, with a Gothic nave, a Romanesque crossing under the dome; chapels in French, English and Spanish Gothic styles, as well as Norman and Byzantine; Gothic choir stalls, and Roman arches and columns separating the high altar and ambulatory.[]

The Very Reverend James Parks Morton, became Dean of the Cathedral in 1972, encouraged a revival in the construction of the Cathedral, and in 1979 the Right Reverend Paul Moore, Jr., then Bishop, decided that construction should be continued, in part to preserve the crafts of stonemasonry by training neighborhood youths, thus providing them with a valuable skill.[] In 1979, Mayor Ed Koch quipped during the dedication ceremony, "I am told that some of the great cathedrals took over five hundred years to build. But I would like to remind you that we are only in our first hundred years." []

One architect who worked for Cram and Ferguson as a young man, John Thomas Doran, eventually became a full partner. [] (Cram and Ferguson became known as Hoyle, Doran and Berry. The firm exists today as HDB/ Cram and Ferguson). The November 1979 edition of LIFE magazine featured St. John the Divine Cathedral. To quote the magazine: (p. 102) One architect from Cram's firm survives. At 80, John Doran is among the last architects able to draw Gothic plans - the difficult style is not taught in schools. He is helping St. John's new generation of builders. "Nothing I've done," Doran says, "has held my interest like the cathedral. Everything since then has just been making a living."

Construction on the south tower resumed for some years in the 1980s, during which campaign another 55 metres (180 ft) of height was added, in limestone rather than the granite of the original construction. Following the abandonment of this initiative, the scaffolding that had been erected around the south tower remained, rusting away (until it was removed in the summer of 2007).[]

Under master stone carvers Simon Verity and Jean Claude Marchionni, work on the statuary of the central portal of the Cathedral's western façade was completed in 1997.[] The Cathedral has since seen no further construction, and the new generation of trained stonecarvers has gone on to other projects.[]

On December 18, 2001, a massive fire destroyed the north transept and covered the pipe organ with soot.

The building as it appears today conforms primarily to a second design campaign from the prolific Gothic Revival architect Ralph Adams Cram of the Boston firm Cram, Goodhue, and Ferguson.[] Without copying any one historical model, and without compromising its authentic stone-on-stone construction by using modern steel girders, Saint John the Divine is an example of the 13th century High Gothic style of northern France.[] The Cathedral is almost exactly two football fields in length (601 feet or 186 meters) and the nave ceiling reaches 124 feet (37.7 m) high.[] It is the longest Gothic nave in the United States, at 230 feet (70 m). Seven chapels radiating from the ambulatory behind the choir are each in a distinctive nationalistic style, some of them borrowing from outside the Gothic vocabulary.[] Known as the "Chapels of the Tongues" (St. Ansgar, St. Boniface, St. Columba, St. Saviour, St. Martin, St. Ambrose and St. James), their designs are meant to represent each of the seven most prominent ethnic groups to first immigrate to New York City upon the opening of Ellis Island in 1892 (the same year the Cathedral began construction).[]

In the center, just beyond the crossing, is the large, raised High Altar, behind which is a wrought iron enclosure containing the Gothic style tomb of the man who originally conceived and founded the cathedral, The Right Reverend Horatio Potter, D.D., LL.D., D.C.L., Bishop of New York.[] Later Episcopal bishops of New York, and other notables of the church, are entombed in side chapels.[]

Directly below this is a large hall in the basement, used regularly to feed the poor and homeless, and for meetings, and multiple crypts.[]

On the grounds of the Cathedral, toward the south, are several buildings (including a Synod Hall and the Cathedral school), and a Biblical garden, as well as a large bronze work of public art by the Cathedral's sculptor-in-residence, Greg Wyatt, known as the Peace Fountain, which has been both strongly praised and strongly criticized.[]

The cathedral in the 21st century

On the morning of December 18, 2001, a fire swept through the unfinished north transept, destroying the gift shop and for a time threatening the sanctuary of the cathedral itself. It temporarily silenced the Aeolian-Skinner pipe organ. Although the organ was not damaged, its pipe chambers had to be removed and laboriously cleaned, to prevent damage from the fire's accumulated soot. Valuable tapestries and other items in the cathedral were damaged by the smoke.

In 2003 New York City Council voted unanimously against landmark designation for the cathedral. Bill Perkins proposed that the protective status should also be extended to the cathedral's grounds to control development there.

In January 2005, the Cathedral began a massive restoration, which was completed and the cathedral rededicated on Sunday, November 30, 2008. A state-of-the-art chemical-based cleaning system was utilized, not only to remove smoke damage resulting from the 2001 fire but also the dark patina of eighty years of city air, filling the interior with unfamiliar light.

In 2008, the cathedral leased the southeast corner of its property, which was formerly wooded, to the AvalonBay Communities. A modern, glass apartment tower, the Avalon Morningside Park now occupies the space.

The Cathedral houses one of the nation's premiere textile conservation laboratories to conserve the Cathedral's textiles, including the Barberini tapestries to cartoons by Raphael.[] The Laboratory also conserves tapestries, needlepoint, upholstery, costumes, and other textiles for its clients.[]

In 1990, avant-garde musician Diamanda Galas performed 'Plague Mass', a culmination of her work dedicated to the victims of the AIDS epidemic.[] Galas' performance consisted of covering her body in cattle blood and reinterpreting biblical texts and classic literature as a protest against the ignorance and condemnation towards people with AIDS from religious and political groups.[]

The Congregation of Saint Saviour, a separately incorporated congregation, makes its home at the Cathedral. It offers events, classes and programs.

The Cathedral requires employees and volunteers undergo a criminal background check, due to the thousands of adults and children[] who pass through the Cathedral.

FDNY
When you enter, turn to the right. You'll find a memorial dedicated to the 12 firefighters who lost their lives at the 23rd Street fire on Oct. 17, 1966.

The New York Daily News
PHOTO: Rev. James Parks Morton blesses an elephant at the Blessing of the Animals ceremony in 1985, at the link!
Load more comments
foursquare.com

Cathedral Church of St. John the Divine on Foursquare

Cathedral of Saint John the Divine, New York on Facebook

The Solomon R. Guggenheim Museum, which opened on October 21, 1959, is

The Park Avenue Bridge is a vertical lift bridge carrying the

The Hayden Planetarium is a public planetarium located on Central Park

Washington National Cathedral, whose official name is the Cathedral 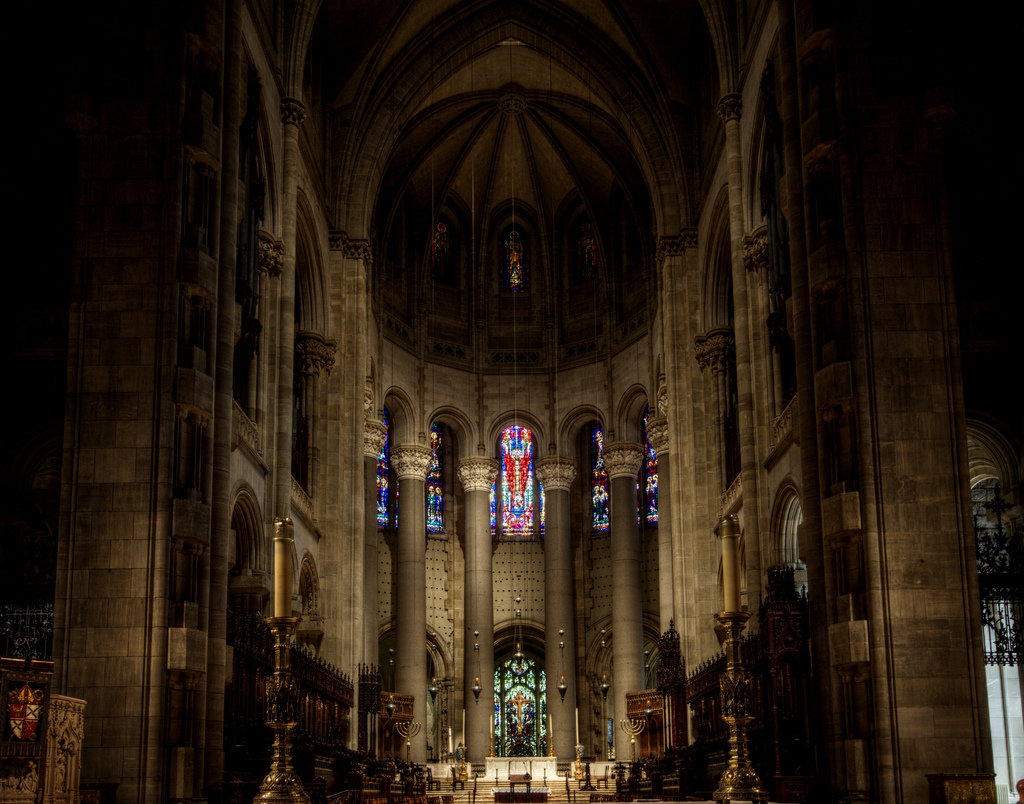 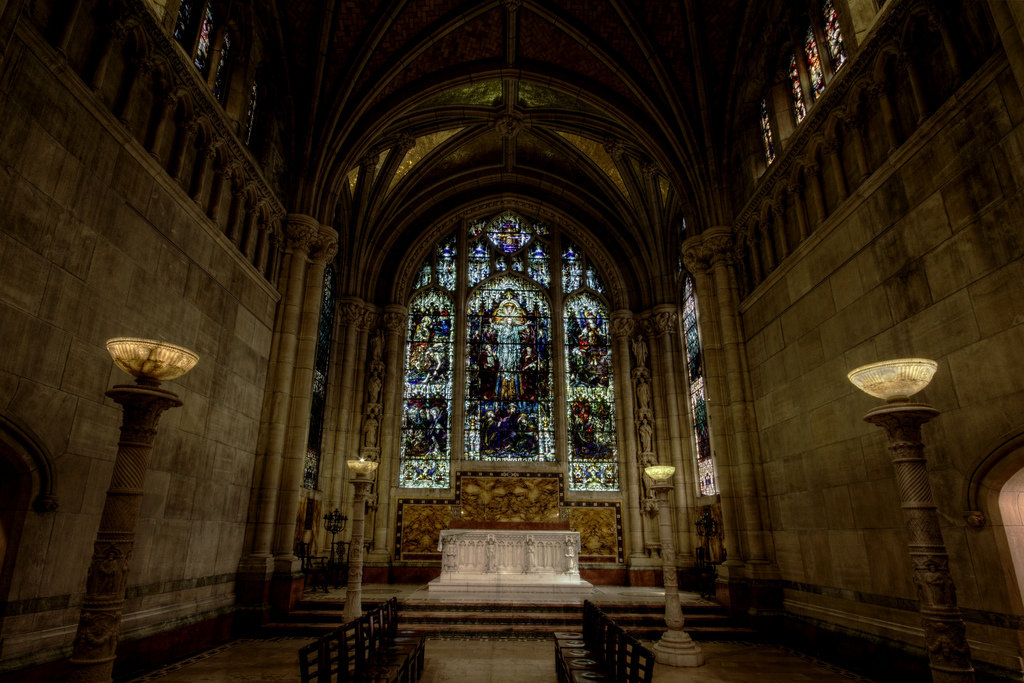 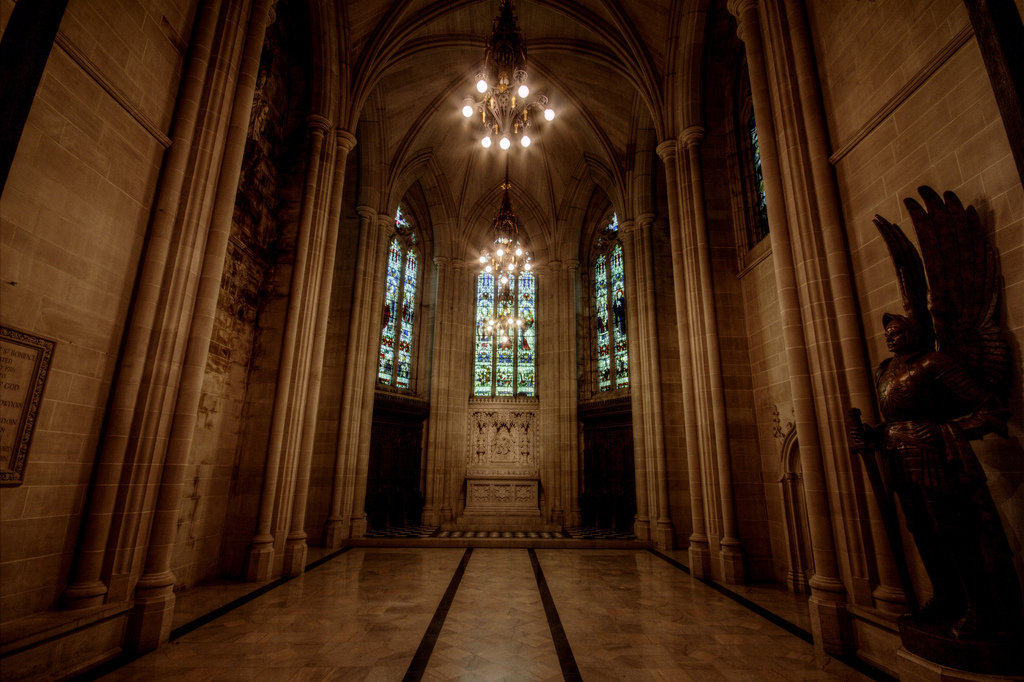 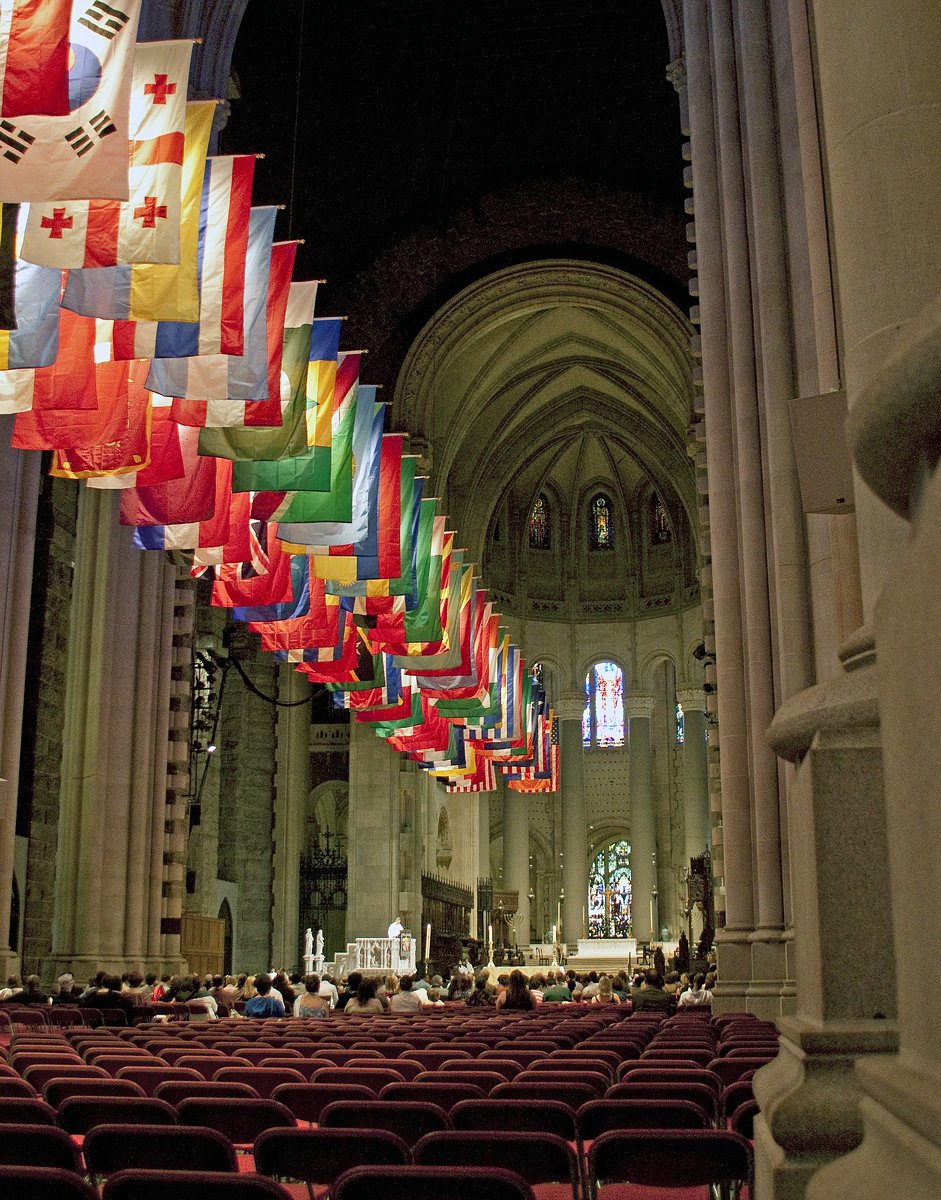 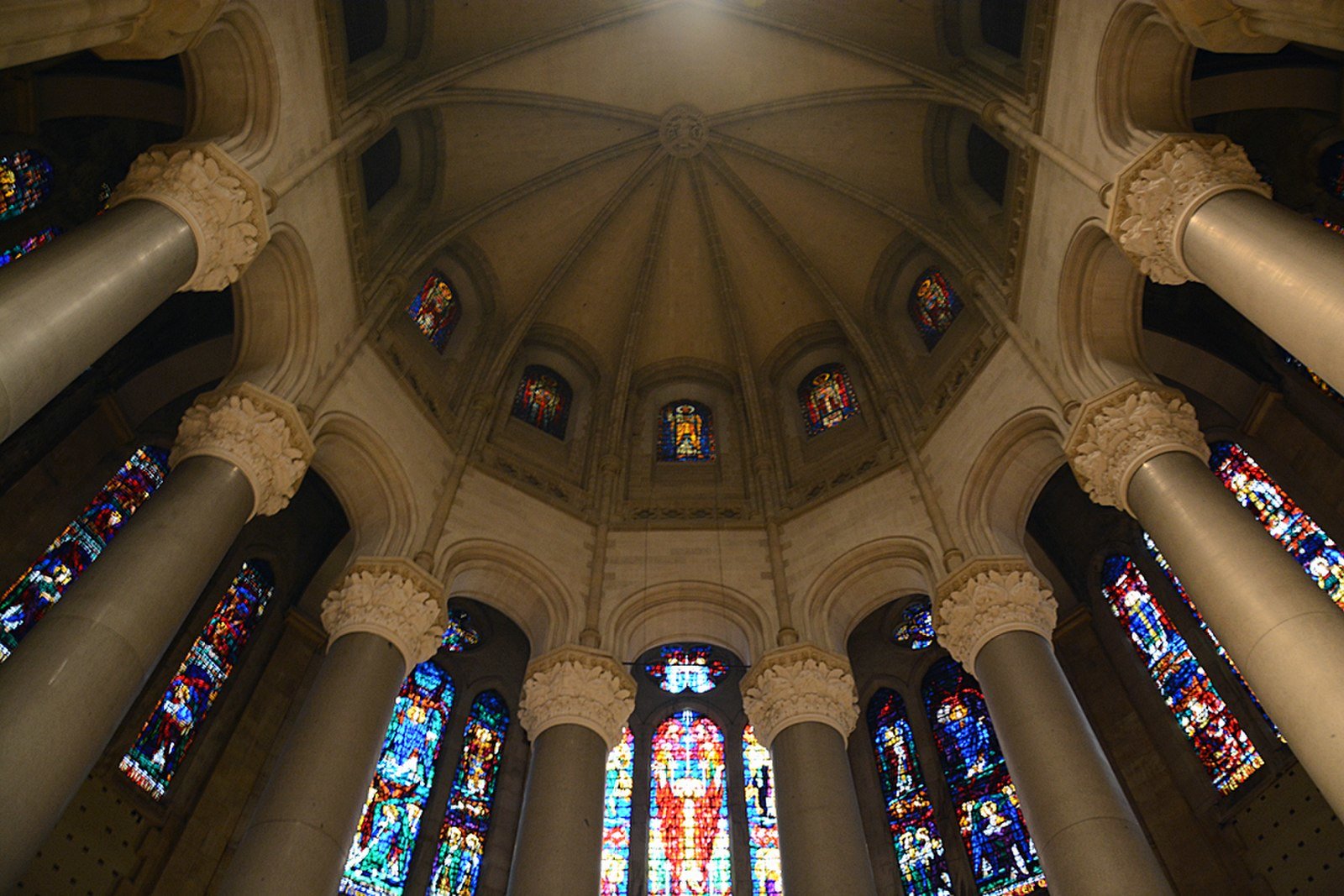 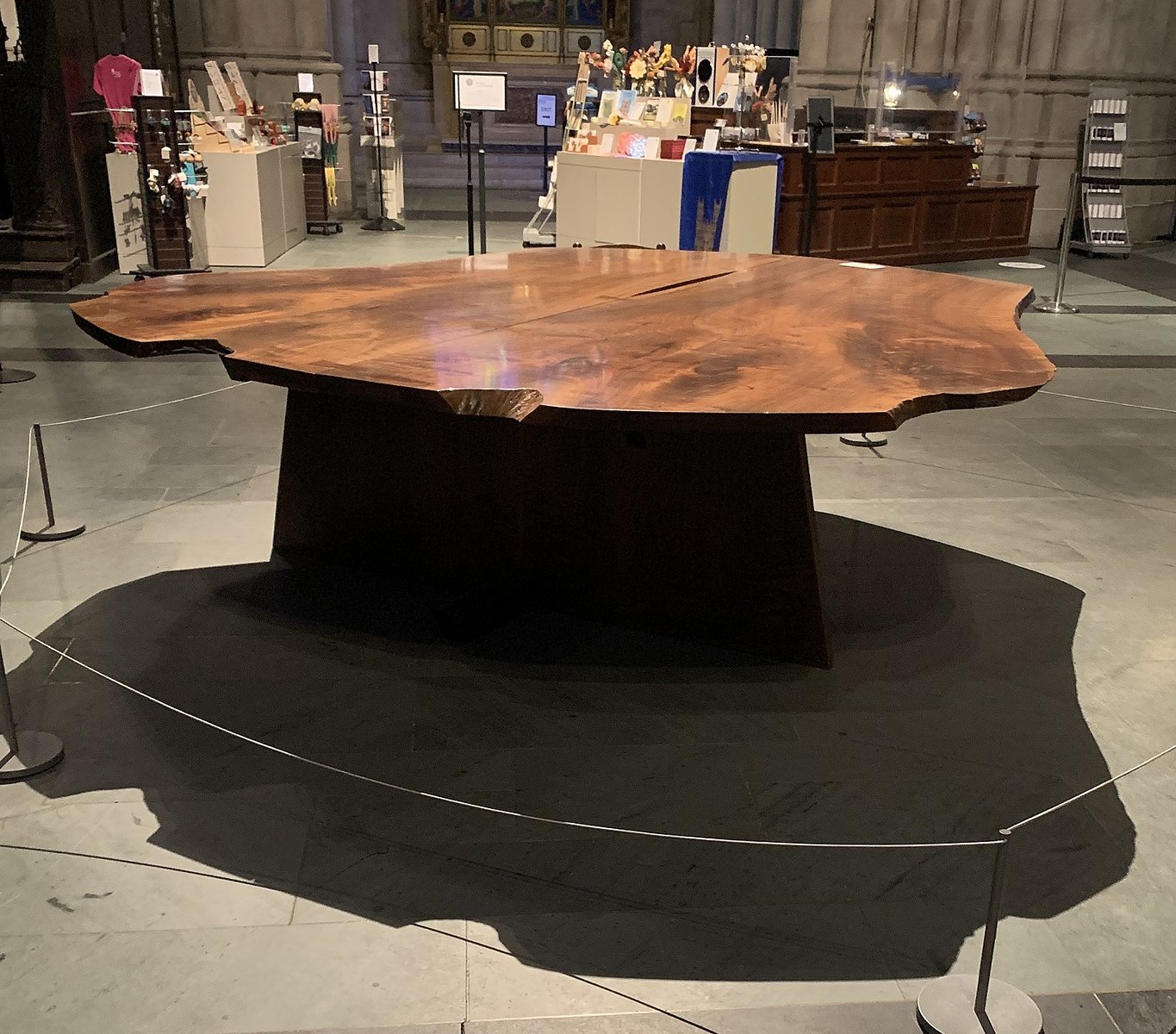 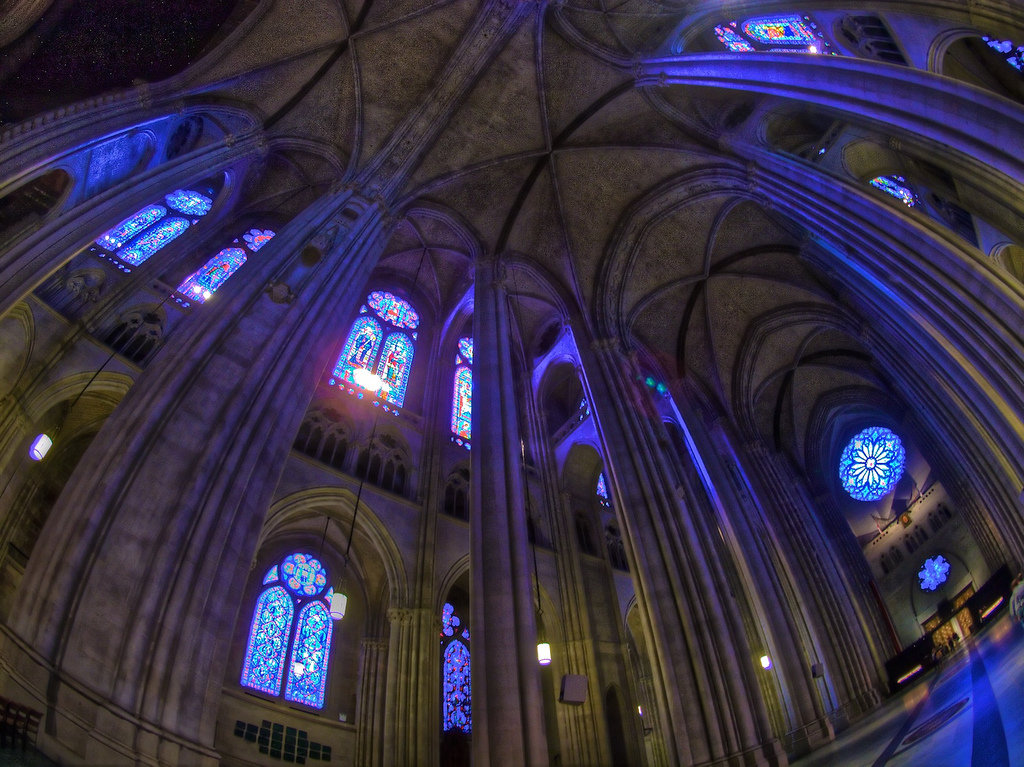