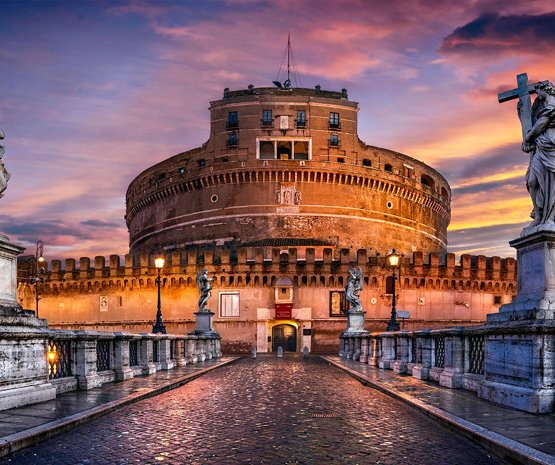 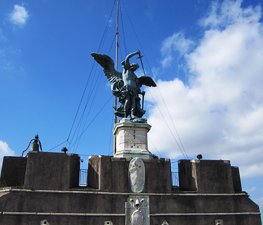 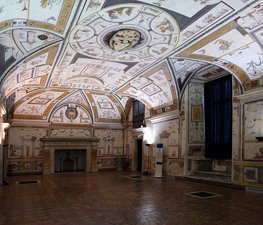 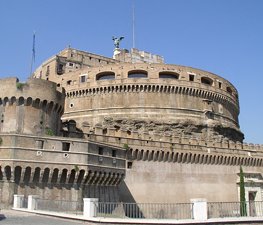 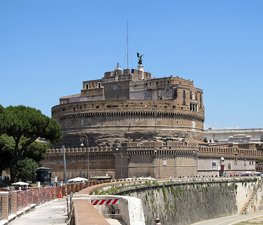 The Mausoleum of Hadrian, usually known as the Castel Sant'Angelo, is a towering cylindrical building in Rome, initially commissioned by the Roman Emperor Hadrian as a mausoleum for himself and his family. The building was later used as a fortress and castle, and is now a museum.

can be seen on the far left.]] The tomb of the Roman emperor Hadrian was erected on the right bank of the Tiber, between 135 and 139. Originally the mausoleum was a decorated cylinder, with a garden top and golden quadriga. Hadrian's ashes were placed here a year after his death in Baiae in 138, together with those of his wife Sabina, and his first adopted son, Lucius Aelius, who also died in 138. Following this, the remains of succeeding emperors were also placed here, the last recorded deposition being Caracalla in 217. The urns containing these ashes were probably placed in what is now known as the Treasury room deep within the building. Hadrian also built the Pons Aelius facing straight onto the mausoleum – it still provides a scenic approach from the center of Rome and the right bank of the Tiber, and is renowned for the Baroque additions of statuary of angels holding aloft elements of the Passion of Christ.

Much of the tomb contents and decoration has been lost since the building's conversion into a military fortress in 401 and inclusion by Flavius Augustus Honorius in the Aurelian Walls. The urns and ashes were scattered by Visigothic looters in Alaric's sack of Rome in 410, and the original decorative bronze and stone statuary was thrown down upon the attacking Goths when they besieged Rome in 537, as recounted by Procopius. An unusual survival, however, is the capstone of a funerary urn (most probably that of Hadrian), which made its way to Saint Peter's Basilica and was recycled in a massive Renaissance baptistery. That spolia from the tomb had been used in the post-Roman period was already noted in the 16th century - Giorgio Vasari writes:

Legend holds that the Archangel Michael appeared atop the mausoleum, sheathing his sword as a sign of the end of the plague of 590, thus lending the castle its present name.

, papal executioner between 1796 and 1865 offering snuff to a condemned prisoner in front of Castel Sant'Angelo]]

The popes converted the structure into a castle, from the 14th century; Pope Nicholas III connected the castle to St. Peter's Basilica by a covered fortified corridor called the Passetto di Borgo. The fortress was the refuge of Pope Clement VII from the siege of Charles V's Landsknecht during the Sack of Rome (1527), in which Benvenuto Cellini describes strolling the ramparts and shooting enemy soldiers.

Leo X built a chapel with a fine Madonna by Raffaello da Montelupo. In 1536 Montelupo also created a marble statue of Saint Michael holding his sword after the 590 plague (as described above) to surmount the Castel. Later Paul III built a rich apartment, to ensure that in any future siege the Pope had an appropriate place to stay.

Montelupo's statue was replaced by a bronze statue of the same subject, executed by the Flemish sculptor Peter Anton von Verschaffelt, in 1753. Verschaffelt's is still in place, though Montelupo's can be seen in an open court in the interior of the Castle.

The Papal state also used Sant'Angelo as a prison; Giordano Bruno, for example, was imprisoned there for six years. Executions were made in the small interior square. As a prison, it was also the setting for the third act of Giacomo Puccini's Tosca from whose ramparts the eponymous heroine of the opera leaps to her death.

Decommissioned in 1901, the castle is now a museum, the Museo Nazionale di Castel Sant'Angelo.

The Castel Sant'Angelo appeared in Dan Brown's 2000 novel Angels and Demons. The location was the secret lair for the Hassassin and was seen as the last existing church of the Illuminati. The book also emphasized the Passetto di Borgo as a secret way of getting from the Vatican to castle.

The castle appeared in the film Roman Holiday in a scene taking place on barges on the river below.

In Puccini's opera, Tosca, the Castel is where Cavaradossi is held prisoner. After murdering Scarpia in his private room at the Palazzo Farnese, Floria Tosca goes to the Castel Sant' Angelo, safe conducts in hand, where her lover, Mario Cavaradossi is to be executed. She has been led to believe it will be a mock execution and is horrified to find her lover dead. Rather than be arrested by Scarpia's henchmen, she throws herself from the rooftop.

Castle of the Holy Angel on Foursquare

The Passetto di Borgo, or simply Passetto, is an elevated passage that

Add to wishlist
I've been here
Visited
Ponte Umberto I

Sant'Agostino is a church in Rome, not far from Piazza Navona. It is 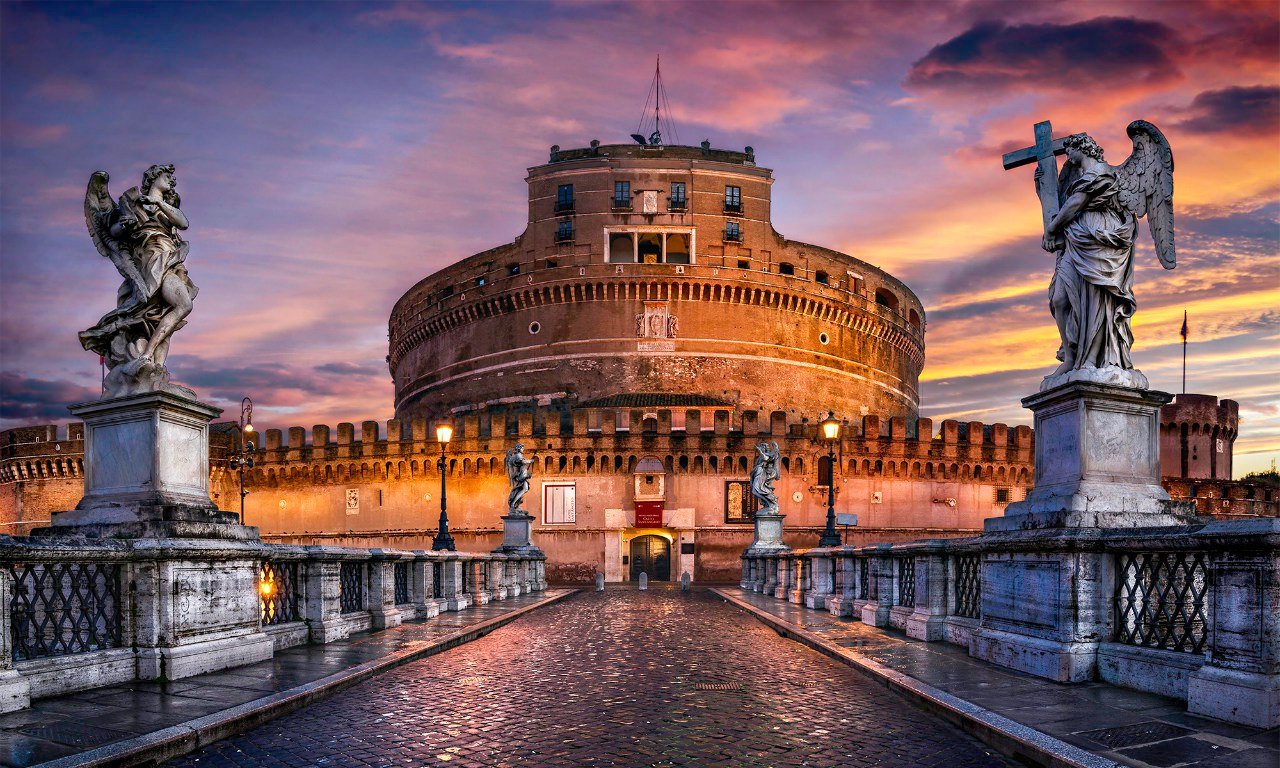 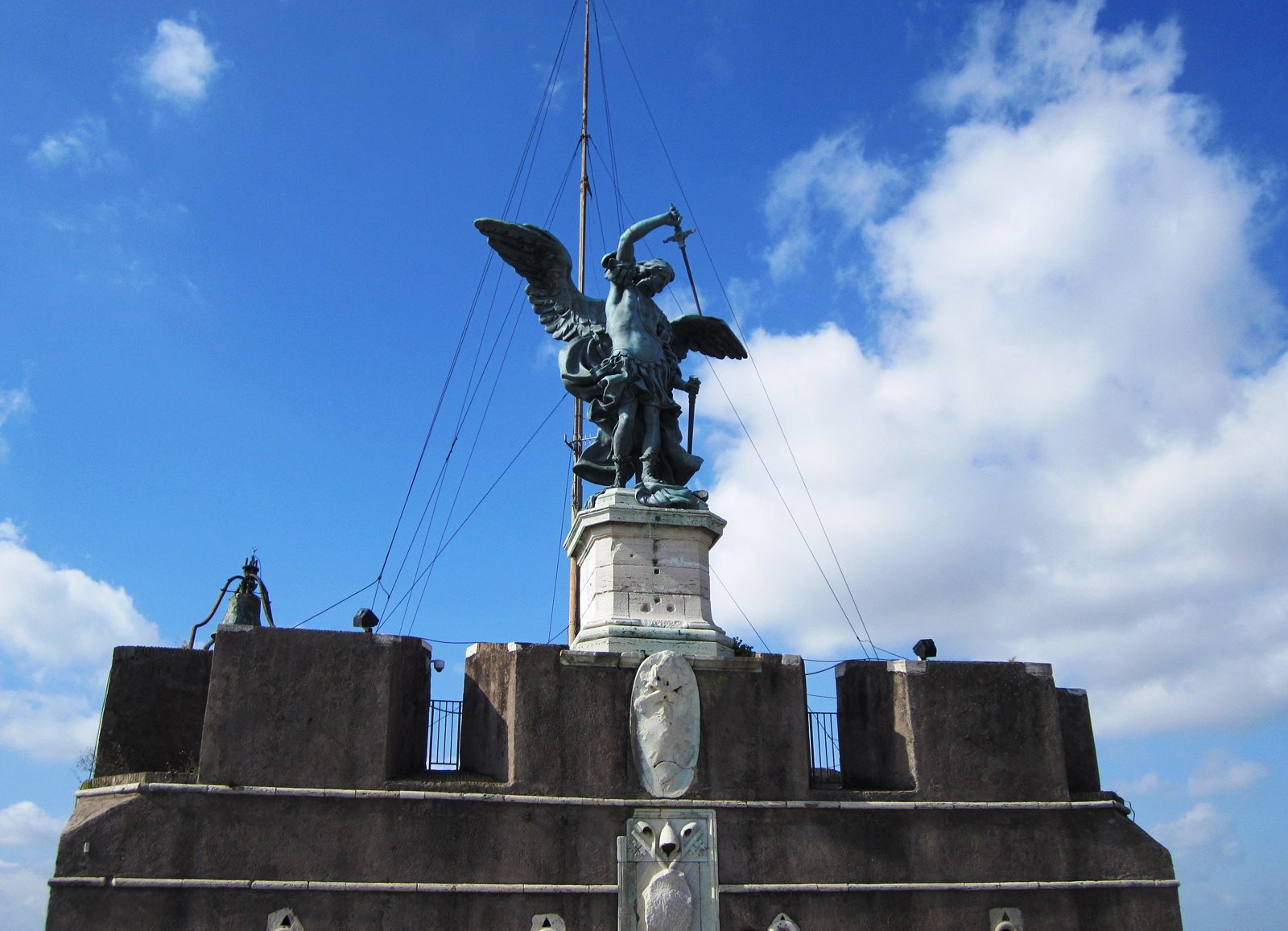 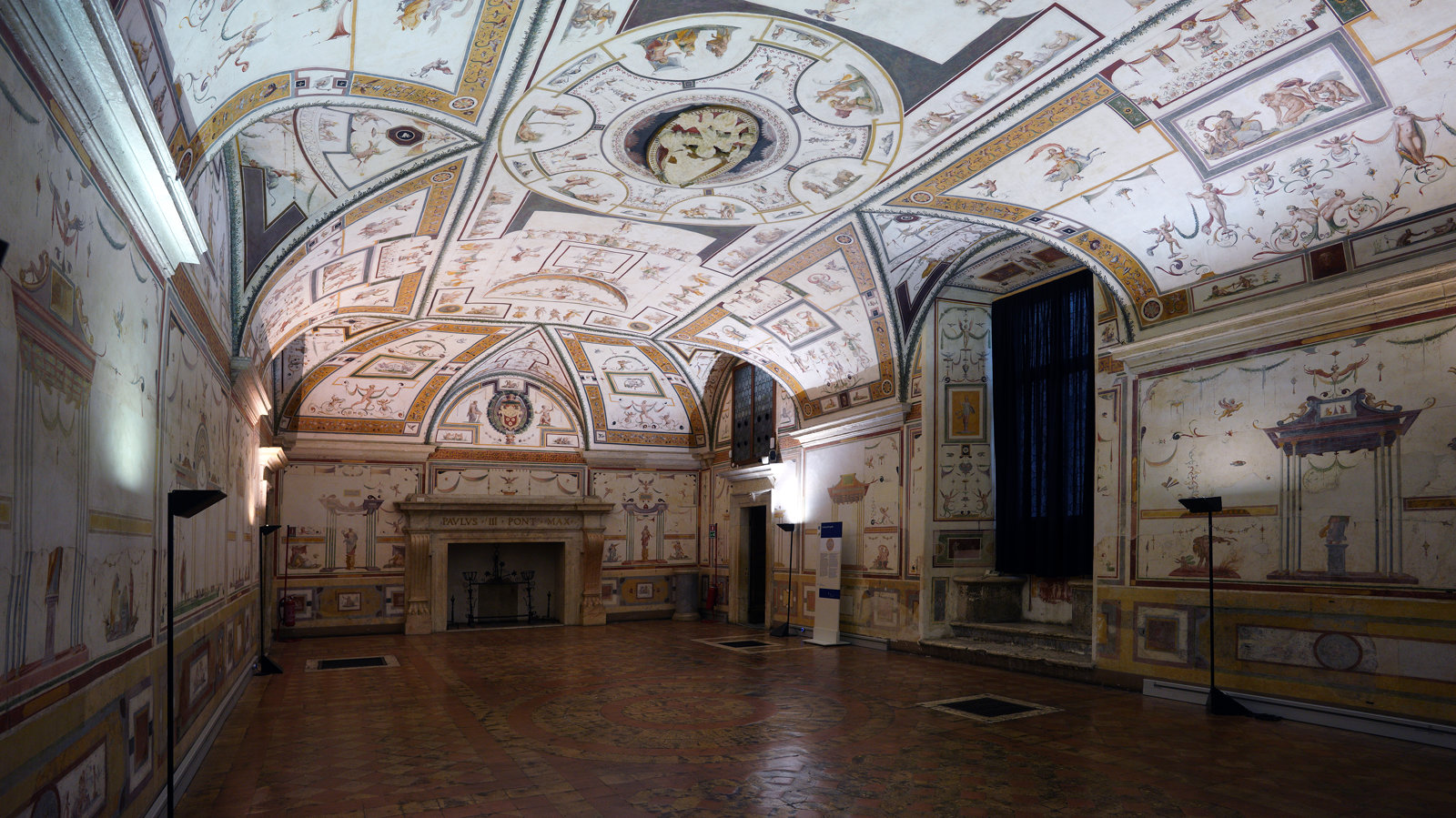 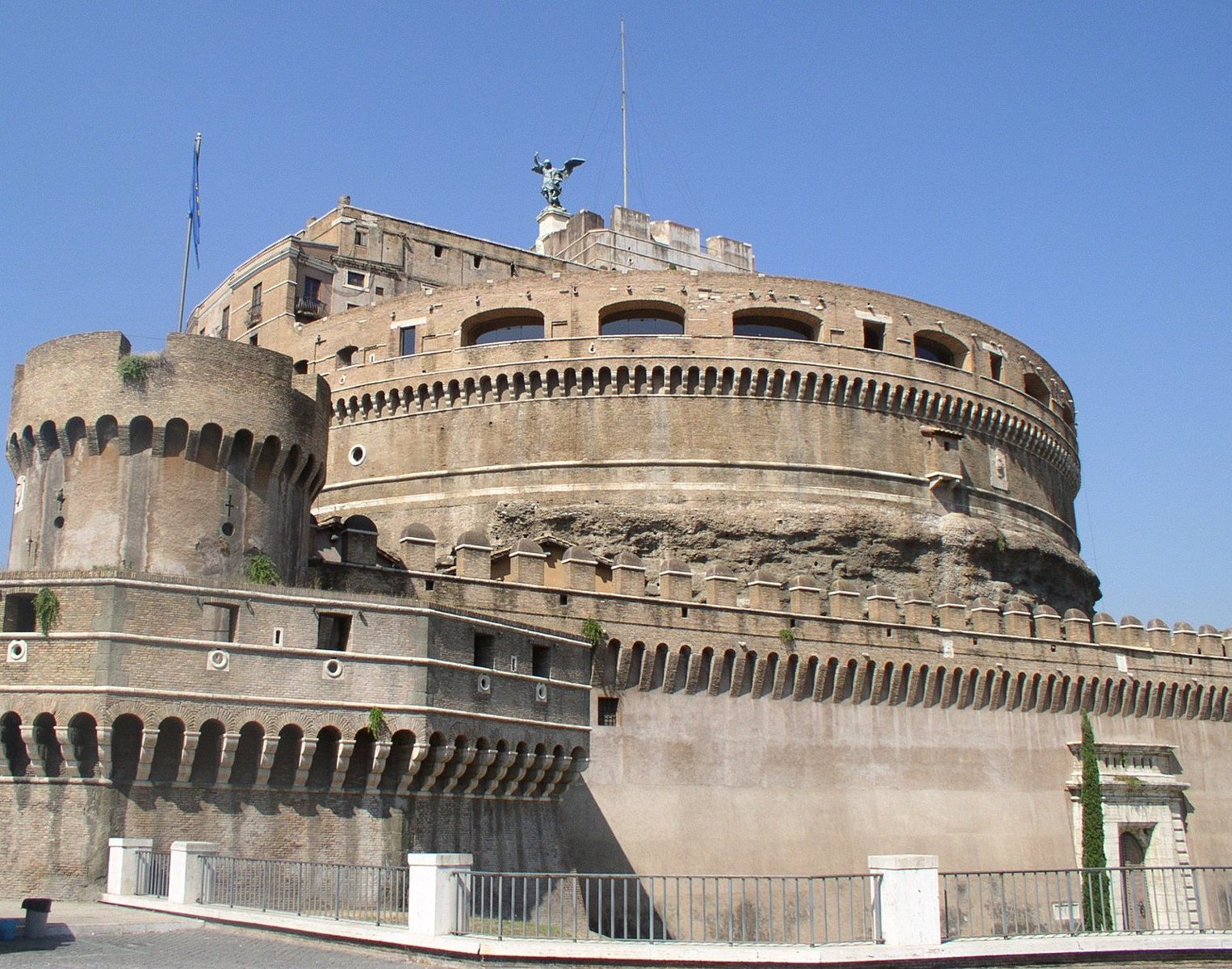 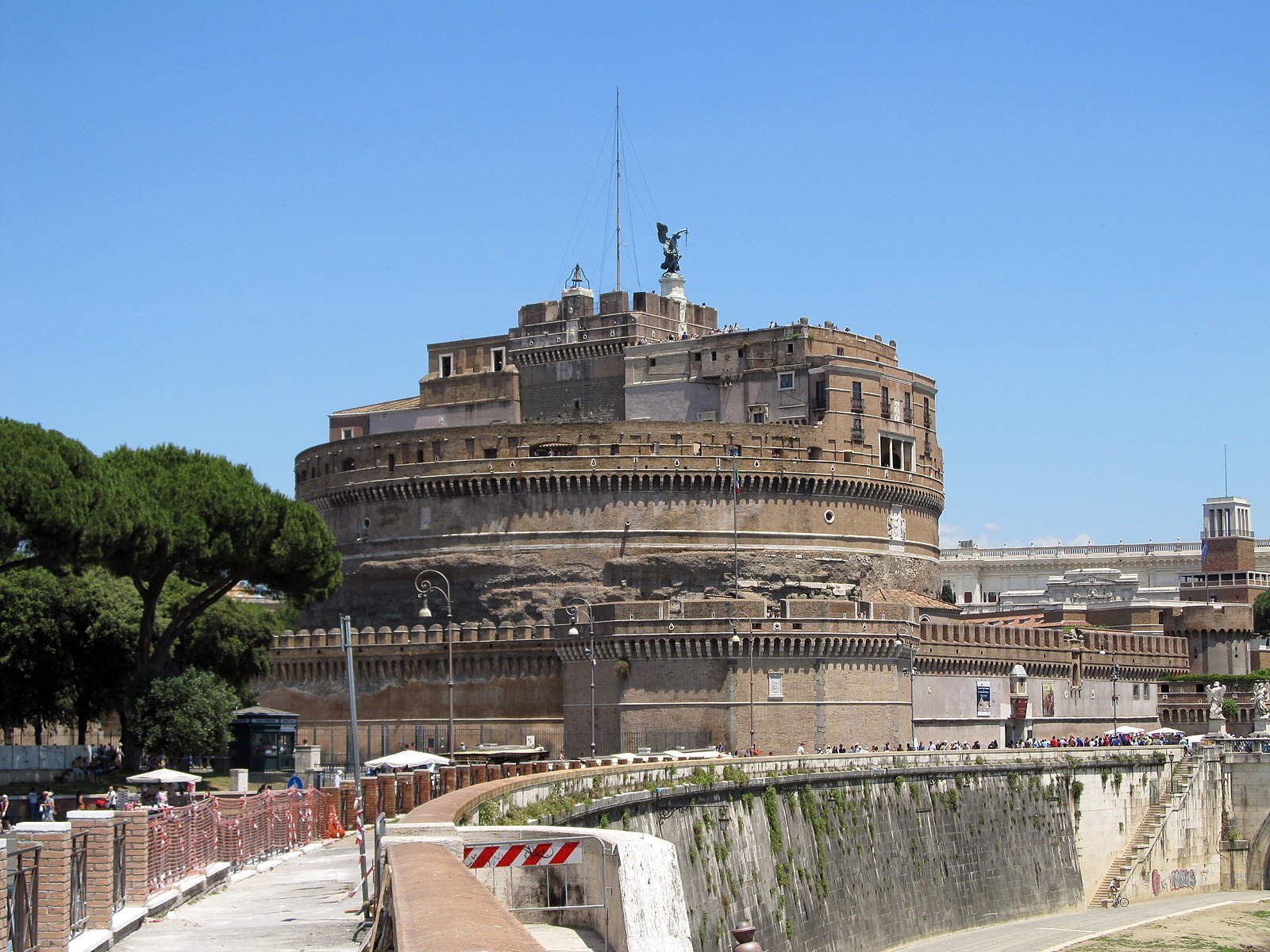 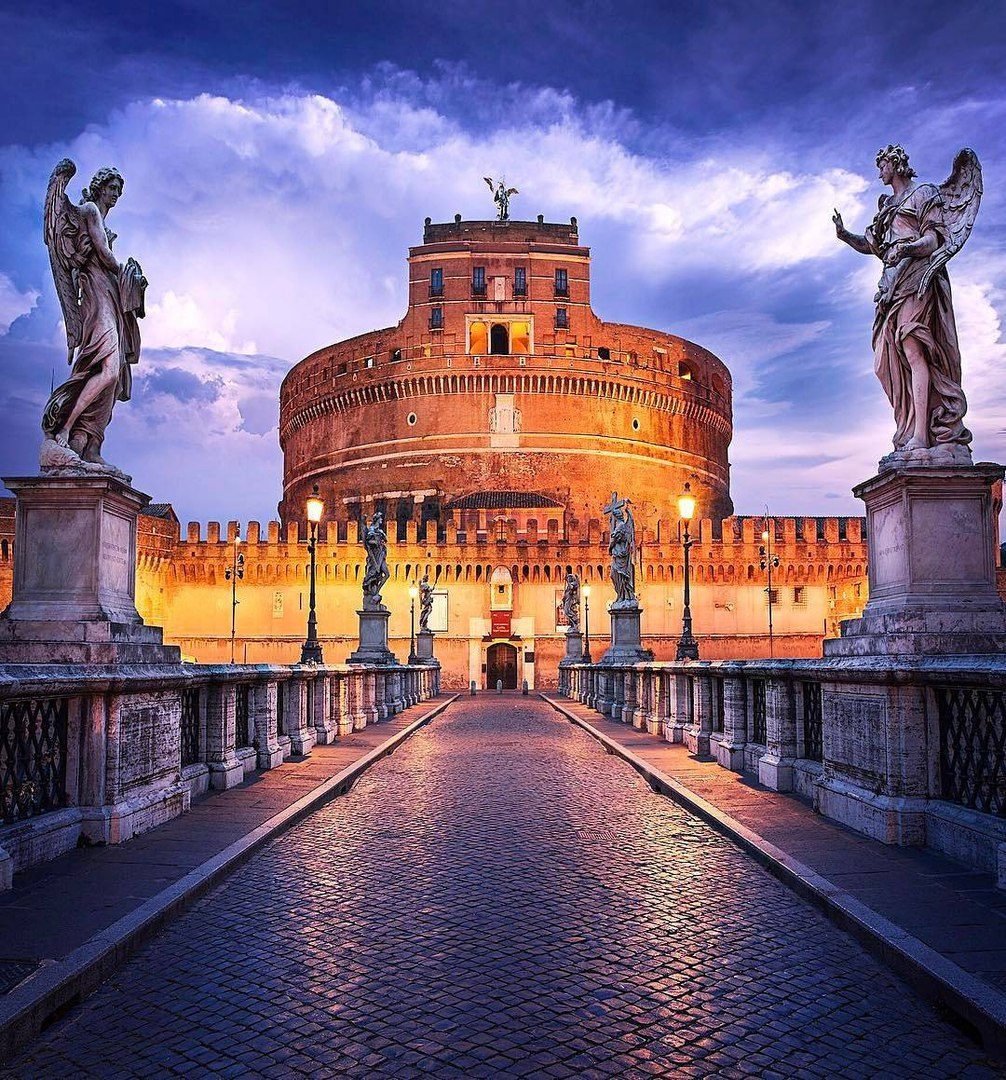 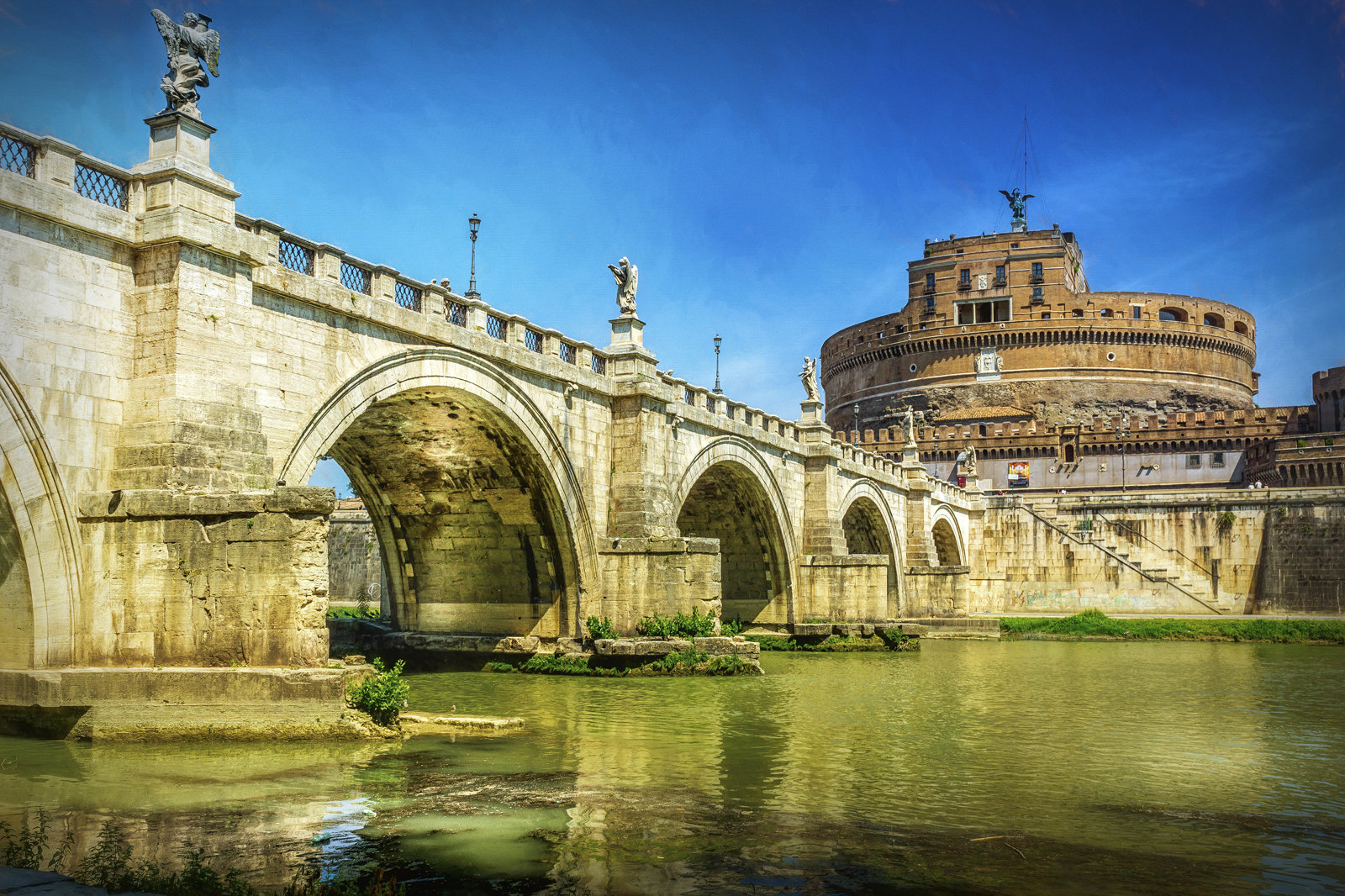 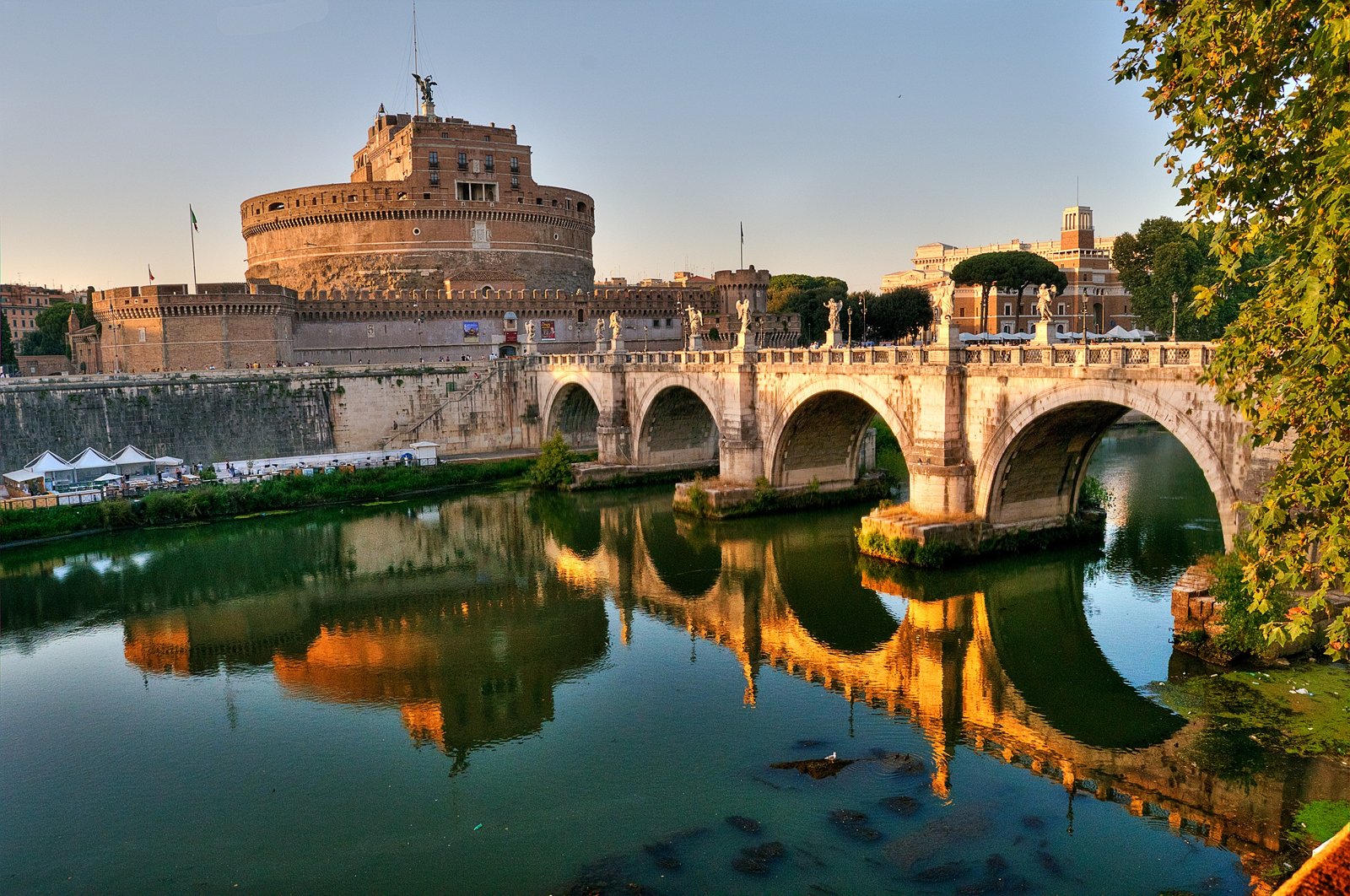 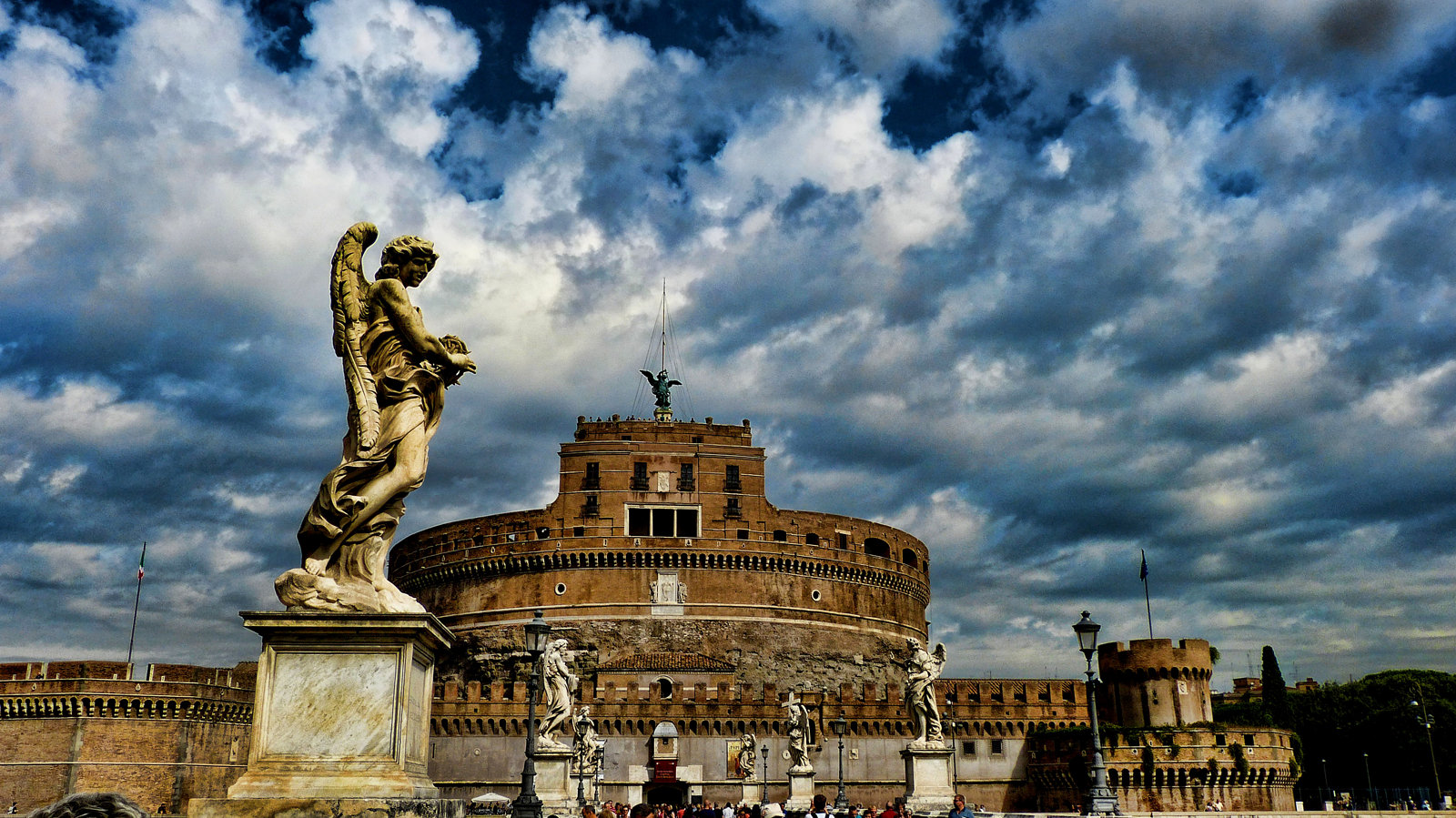 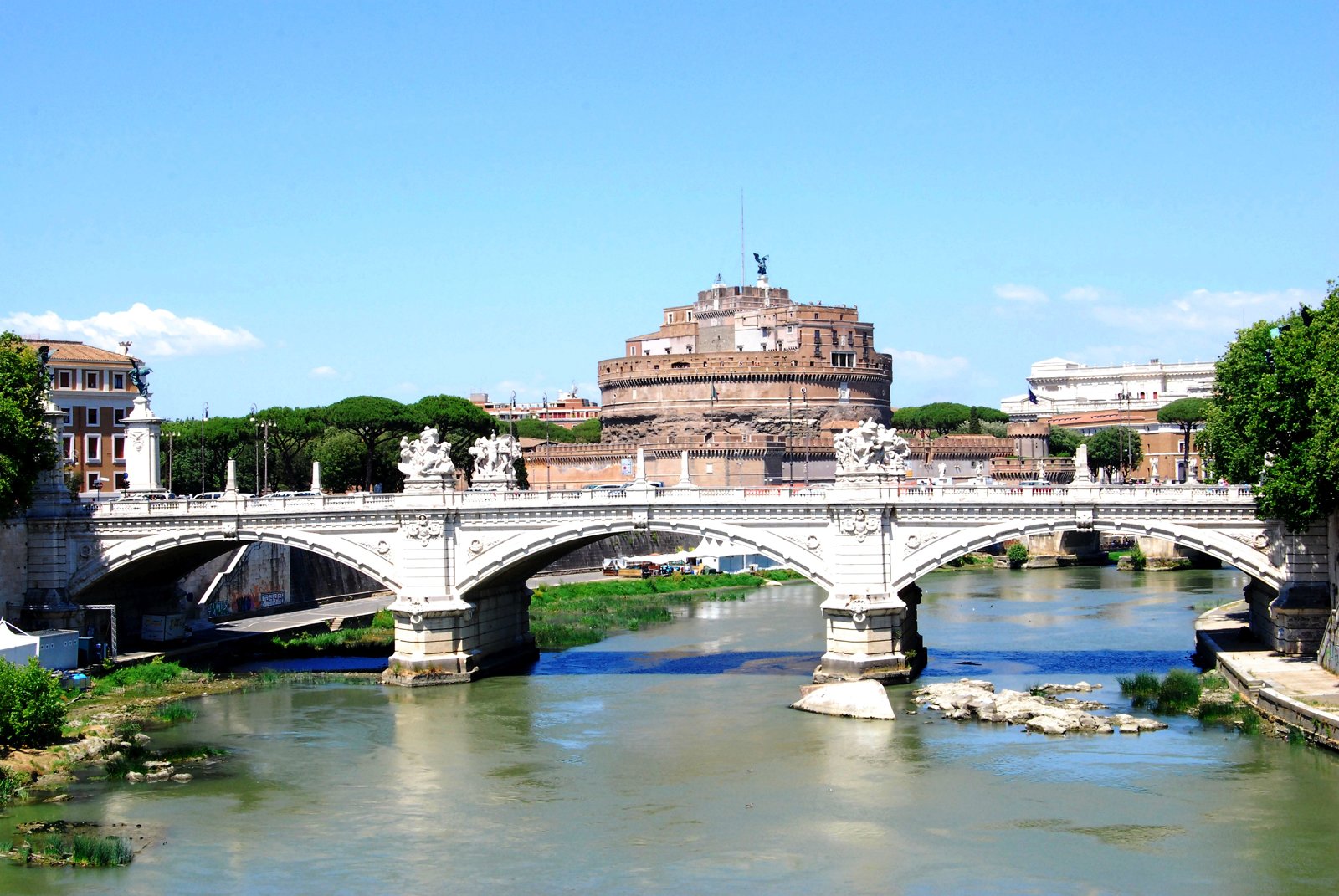 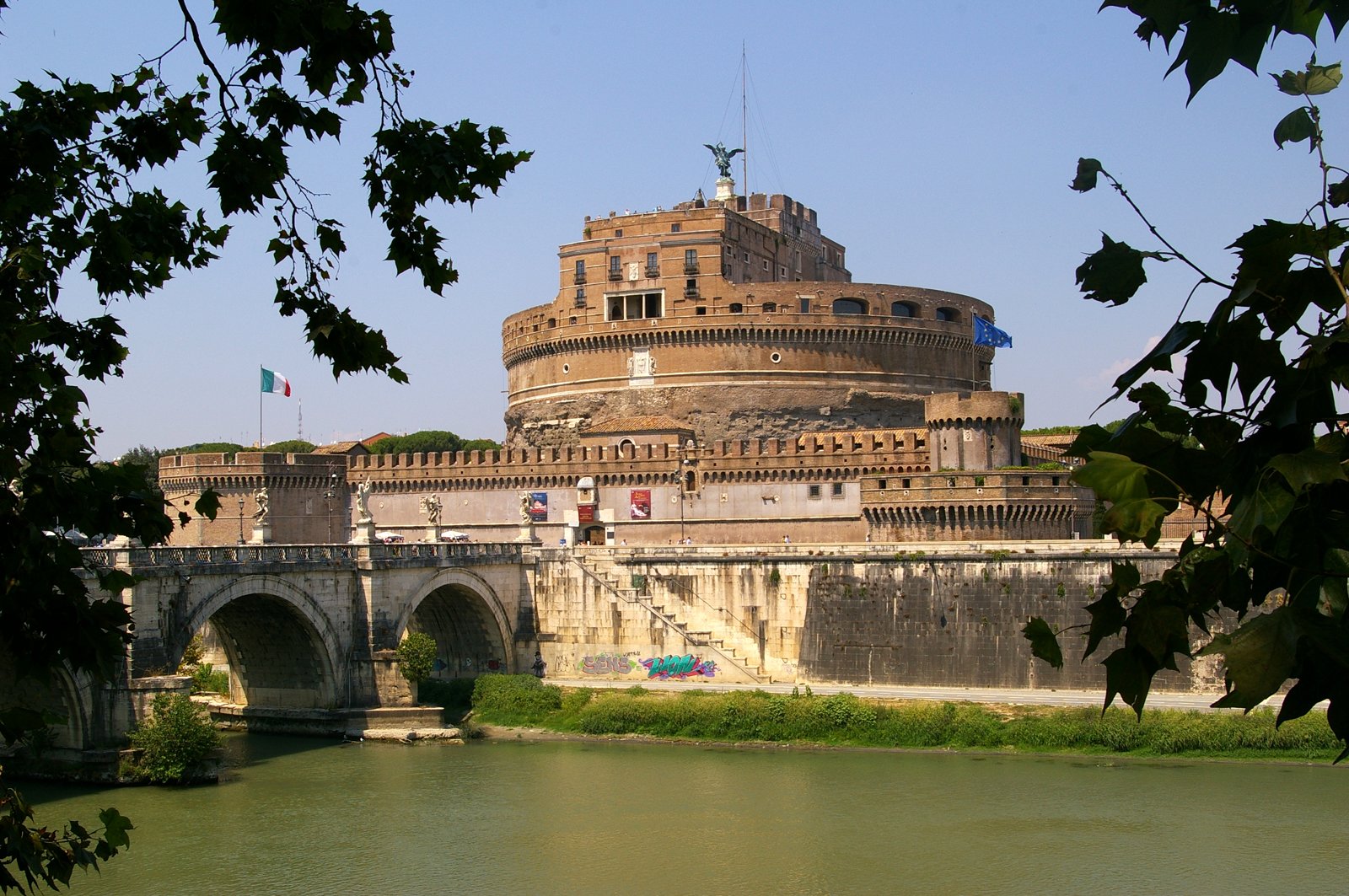 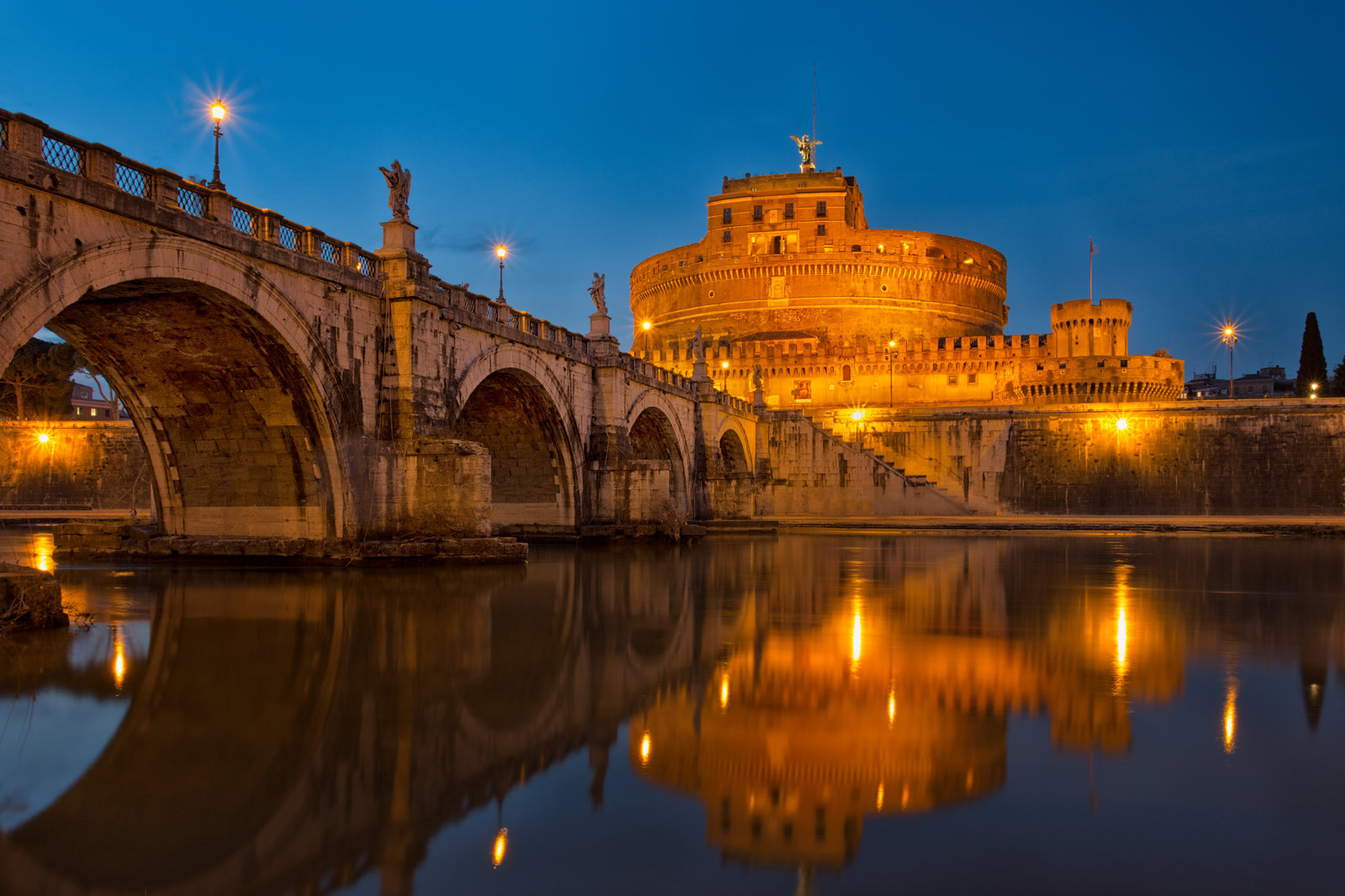 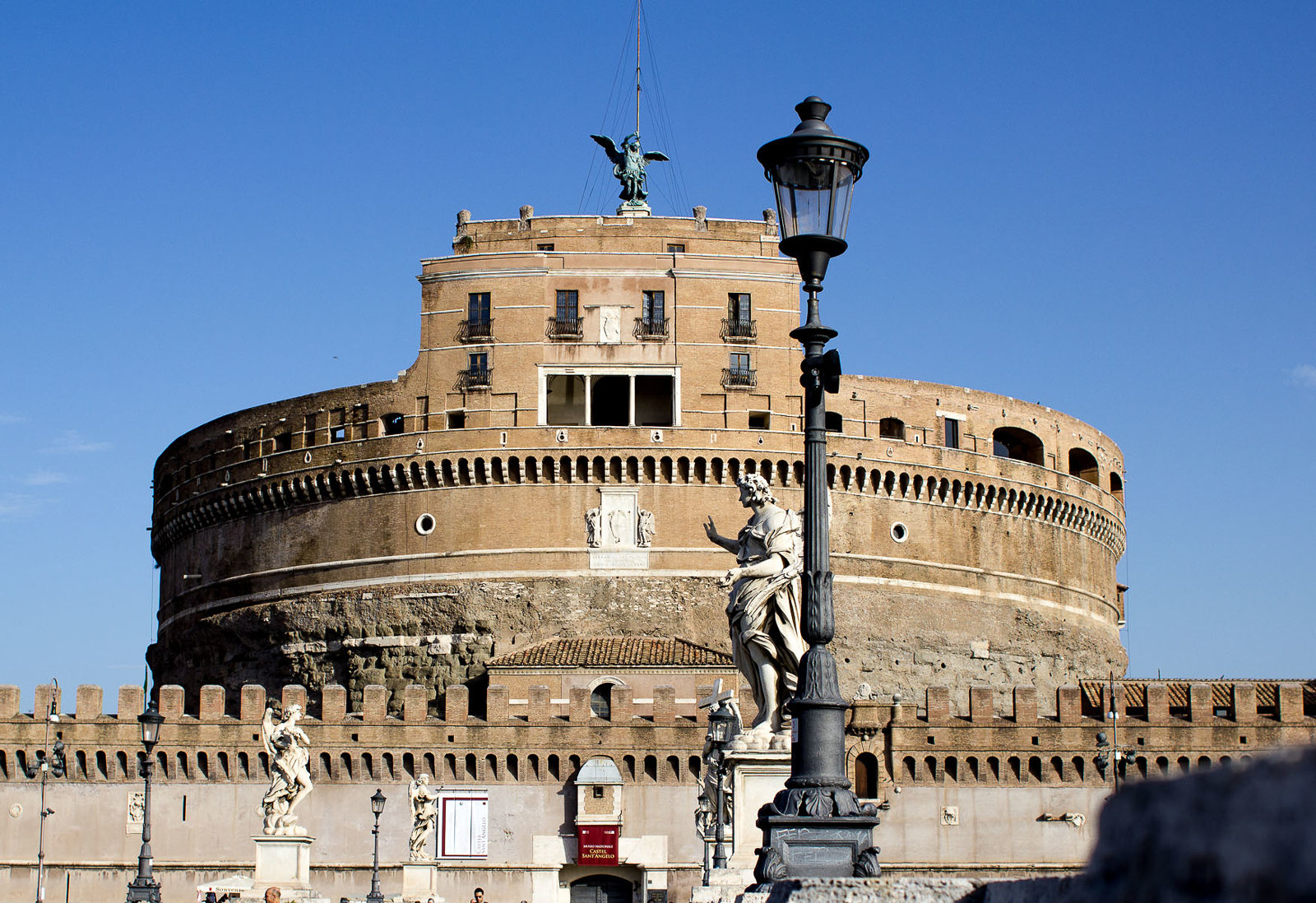 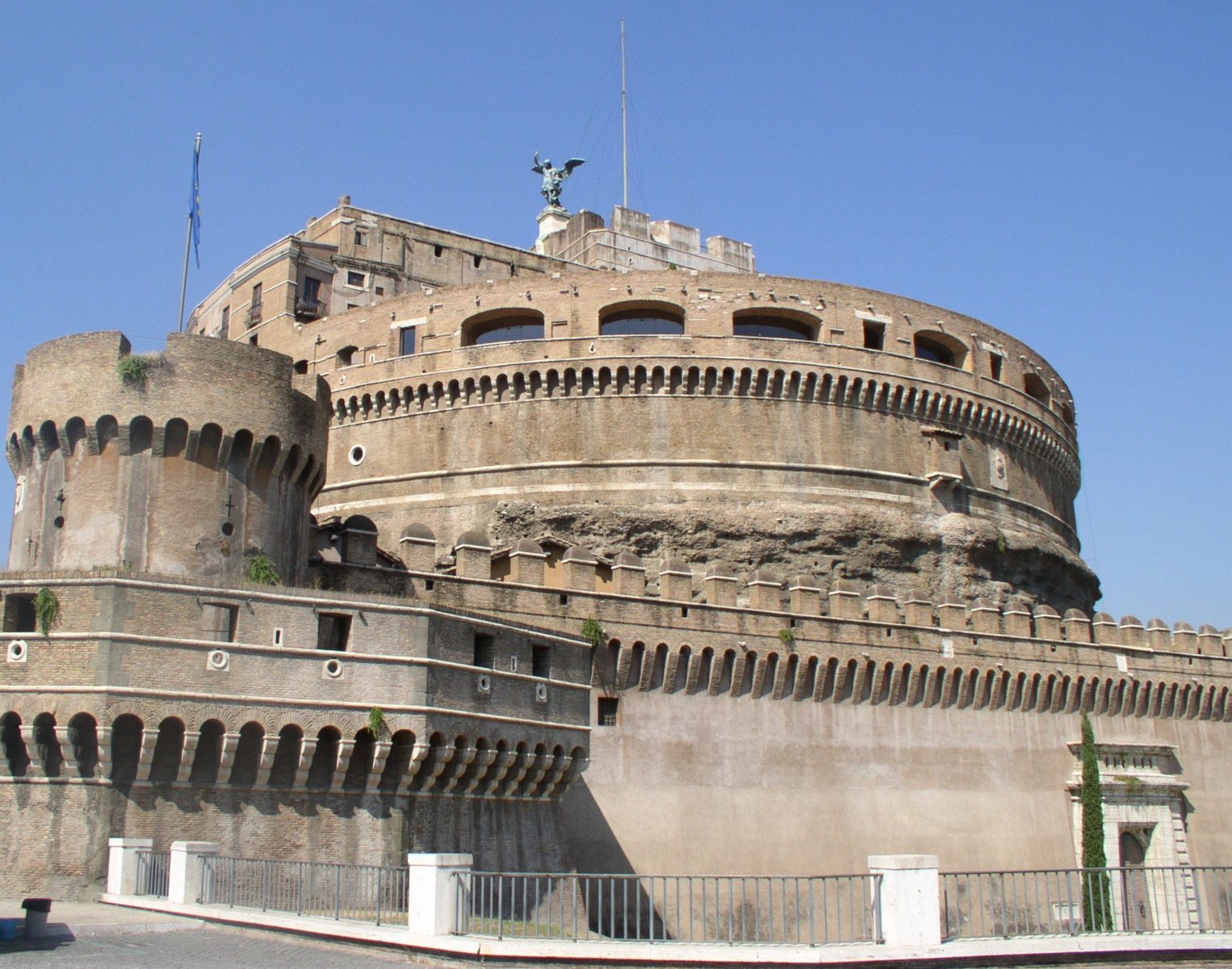 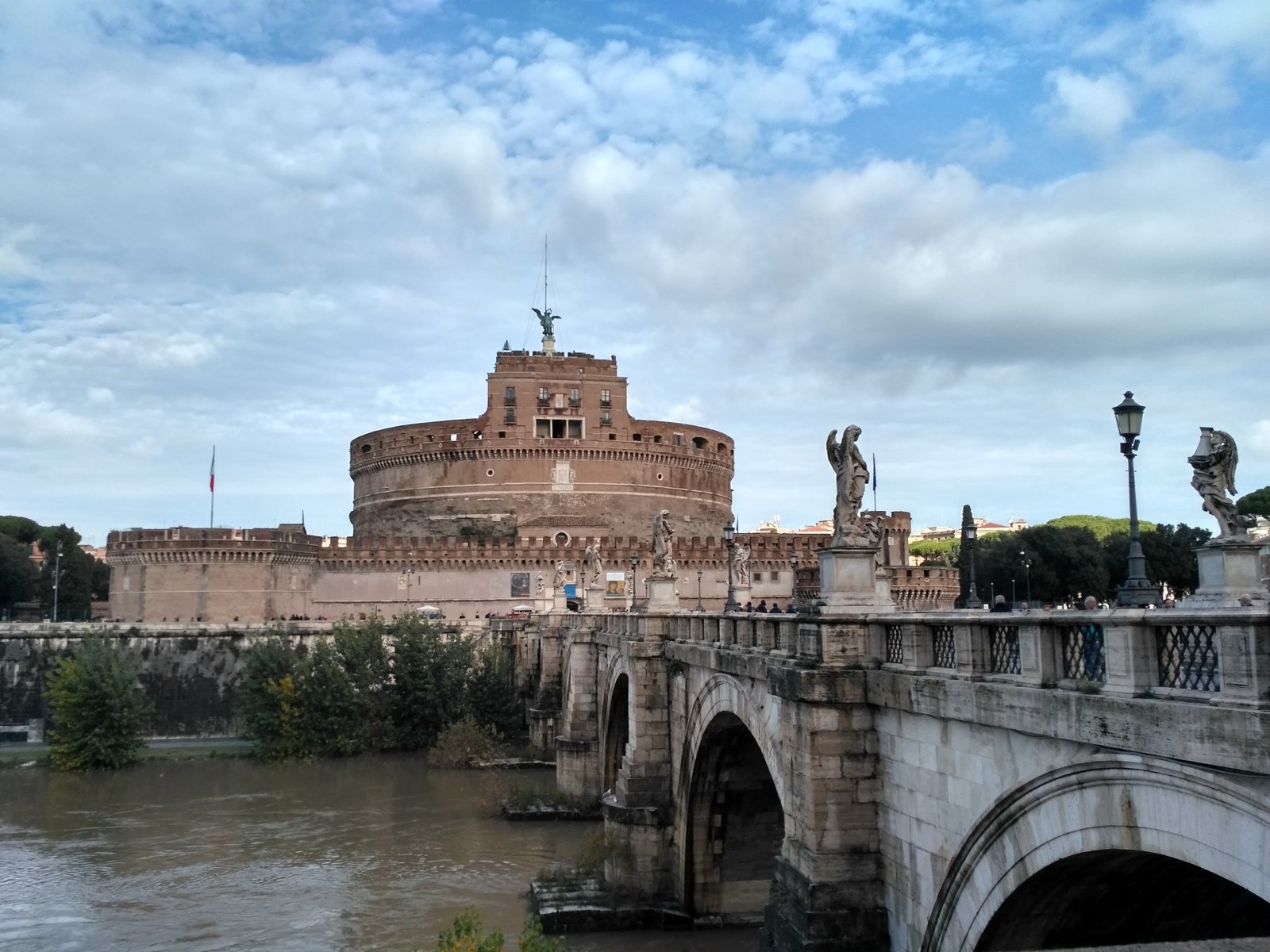 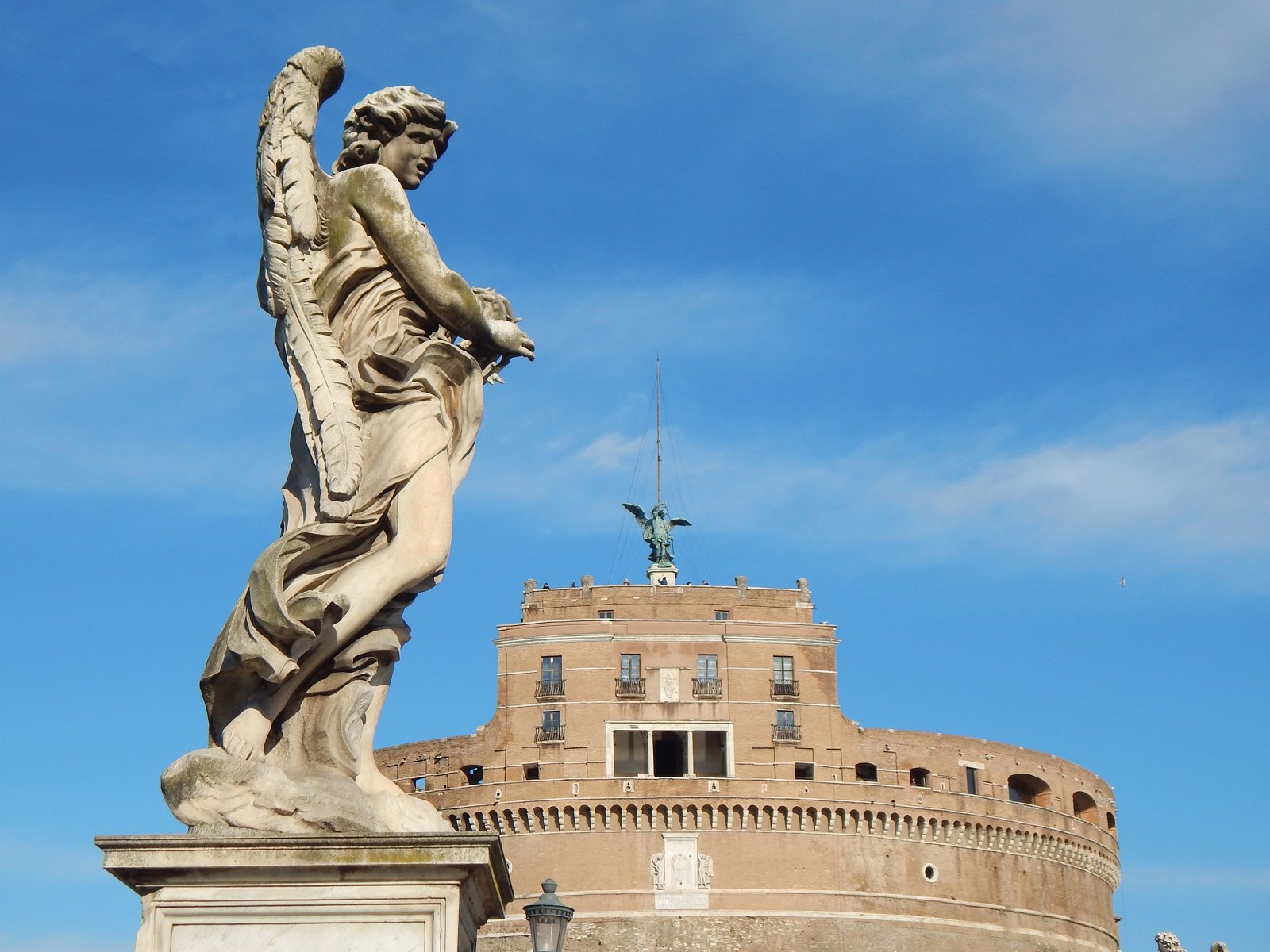 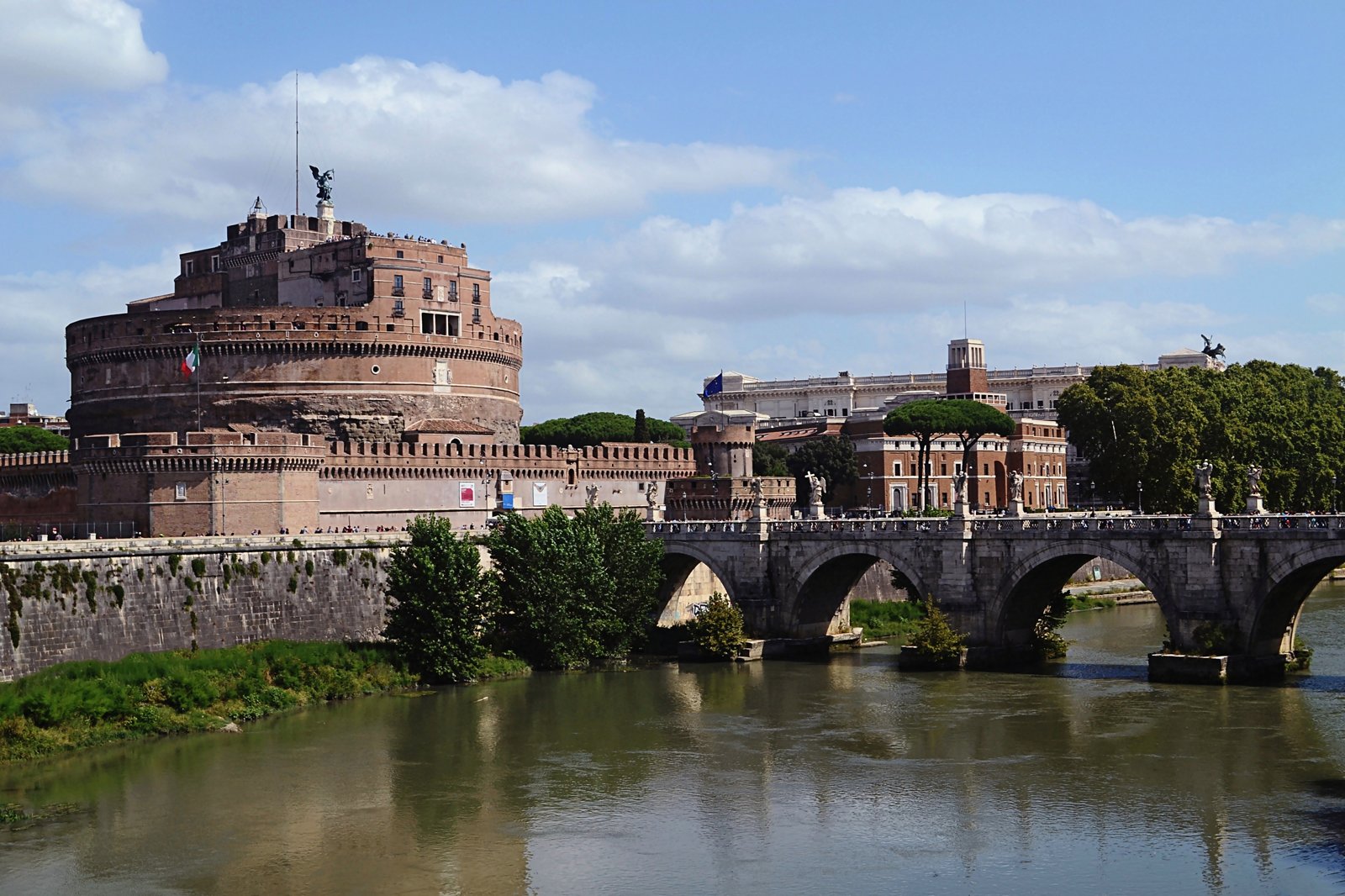 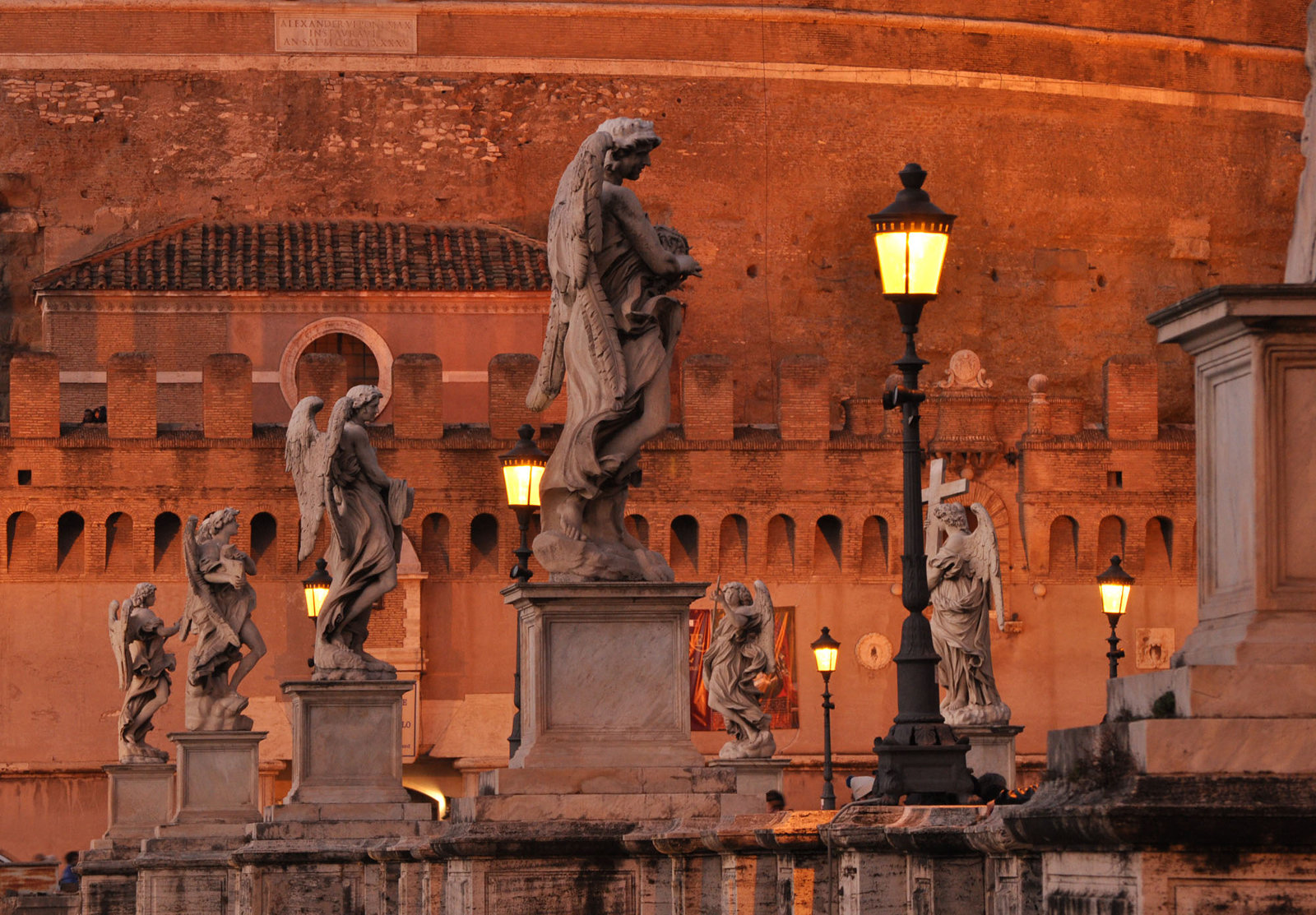