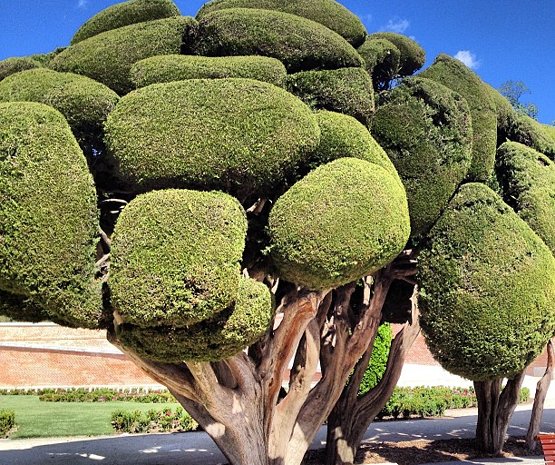 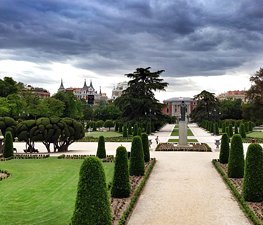 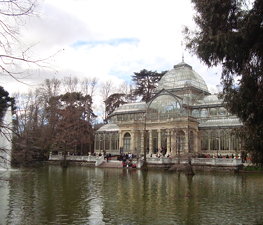 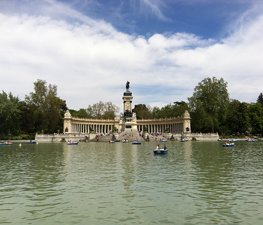 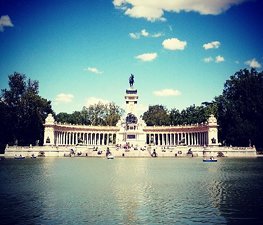 Buen Retiro Park (Parque del Buen Retiro) is a large and popular 1.4 km2 (350 acres) park at the edge of the city center, very close to the Puerta de Alcalá and not far from the Prado Museum. A magnificent park, filled with beautiful sculpture and monuments, galleries, a peaceful lake and host to a variety of events, it is one of Madrid's premier attractions. The park is entirely surrounded by the present-day city.

History of the park and palace

In 1505, at the time of Isabella I (r. 1474–1504) the Jeronimos monastery was moved from an unsuitable location elsewhere to the present site of San Jeronimo el Real Church, and a new monastery built in Isabelline Gothic style. The royal family had a retreat built as part of the church.

King Philip II (r. 1556–1598) moved the Spanish court to Madrid in 1561. Philip had the Retiro enlarged by his architect Juan Bautista de Toledo, and formal avenues of trees were laid out.

The gardens were extended in the 1620s, when Gaspar de Guzmán, Count-Duke of Olivares, Philip IV's powerful favourite, gave the king several tracts of land in the vicinity for the Court's recreational use. Olivares determined to build, in a place that the king liked, a royal house which should be superior to those villas that Roman nobles had been setting up in the hilly outskirts of Rome during the previous century. Although this second royal residence was to be built in what were then outlying areas of Madrid, it was actually not far from the existing Alcázar or fortress residence, and the location in a cool, wooded area proved to be ideal.

In the 1630s, under the supervision of architects Giovanni Battista Crescenzi and Alonso Carbonell, several building were erected in great haste, two of which are still standing: the "Casón del Buen Retiro" which served as a ballroom, and the building that today houses the military museum, the Museo del Ejército, which includes the grand entrance hall, the "Salón de Reinos" (Hall of Kingdoms), its wall decorated with paintings by Velázquez and Zurbarán and frescoes by Luca Giordano.

The Count-Duke of Olivares commissioned the park in the 1630s, worked on by Cosimo Lotti, a garden designer who had worked under Bernardo Buontalenti on the layout of the Boboli Gardens for Cosimo I, Grand Duke of Tuscany. Water was a distinguishing trait of the garden from the outset: the great pond, Estanque del Retiro, which served as the setting for mock naval battles and other aquatic displays, the great canal, the narrow channel, the chamfered or bellflower pond, created —along with the chapels— the basic layout of the gardens. Buen Retiro was described as "The world art wonder of the time", probably the last great creation of the Renaissance in Spain. Buen Retiro became the center of Habsburg court life at a time when Spain was the foremost power in the world. During the reigns of Philip IV and Charles II several magnificent plays were performed in the park for the royal family and the court.

The gardens were neglected after the death of Philip IV in 1665, but have been restored and changed on many occasions, notably after being opened to the public in 1767 and becoming the property of the municipality in 1868..

Philip V (1700–1746) ordered the creation of a parterre, the only French-style garden in the complex. During the reign of Ferdinand VI, Buen Retiro was the setting for magnificent Italian operas. Charles III (1759–1788) saw to the beautification of its perimeter, replacing the old walls with elegant wrought-iron railings. Juan de Villanueva's Astronomical Observatory was built during the reign of Charles IV (1788–1808).

The Buen Retiro Palace was used until the era of Charles III. Most of the palace was destroyed during the Peninsular War (1807–1814) with the First French Empire.

The reign of Queen Isabella II saw profound changes in the "Retiro". During the queen's minority, the gardens enjoyed a particularly prosperous period, with the planting of shade and fruit trees, and previously unplanted areas like the "Campo Grande", were landscaped as well. The gardens eventually passed to public ownership in 1868, at the time of the overthrow of Queen Isabella.

El Retiro gradually became the green heart of the city. At the beginning of the 20th century, the monument to Alfonso XII was erected next to the pond. Countless statues, fountains and commemorative monuments have filled the park and converted it into an open-air sculpture museum.

The nineteen-thirties and forties witnessed the creation of new gardens attributed to Chief Gardener Cecilio Rodriguez who designed and built the rose bed and the gardens that have been named to honor him.

Features of the Park

Close to the northern entrance of the park is the Estanque del Retiro ("Retiro Pond"), a large artificial pond. Next to it is the monument to King Alfonso XII, featuring a semicircular colonnade and an equestrian statue of the monarch on the top of a tall central core.

The Rosaleda rose garden. Among the many rose bushes of all kinds stands the Fountain of the Falling Angel, erected in 1922, whose main sculpture El Angel Caído (at the top) is a work by Ricardo Bellver (1845–1924) inspired by a passage from John Milton's Paradise Lost , which represents Lucifer falling from Heaven. It is claimed that this statue is the only known public monument of the devil.

The few remaining buildings of the Buen Retiro Palace, including Casón del Buen Retiro and the Museo del Ejército, now house museum collections. The Casón has a collection of 19th and 20th century paintings, including art by the Spanish painter Joaquín Sorolla. The Ejército is one of Spain's foremost Army museums and it houses "La Tizona" the sword of the famous Spanish warrior El Cid. There are displays of armor, a cross carried by Christopher Columbus on his sea voyage to the New World and other artifacts.

Since assuming its role as a public park the late 19th century, the "Parque del Retiro" has been used as avenue for various international exhibitions. Several emblematic buildings have remained as testimony to such events, including the Minig building, popularly know as the Velázquez Palace (1884) by architect Ricardo Velázquez Bosco, and the Palacio de Cristal ("Crystal Palace"), a glass pavilion inspired by The Crystal Palace in London, undoubtedly the gardens' most extraordinary building. Built along with its artificial pond in 1887 by architect Ricardo Velázquez Bosco for the Philippine Islands Exhibitions, it was first used to display flower species indigenous to the islands. The landscape-style gardens located in the former "Campo Grande" are also a reminder of the international exhibitions that have taken place here in the past.

There are now art galleries in the Crystal Palace, Palacio de Velázquez, and Casa de Vacas.

In the Retiro Park is also the Forest of the Departed (Bosque de los Ausentes), a memorial monument to commemorate the 191 victims of the 11 March 2004 Madrid attacks.

From late May through early October, every Sunday at midday, the Banda Sinfónica de Madrid gives free concerts from the bandstand in the park near the Calle d'Alcala. Manuel Lillo Torregrosa composed 'Kiosko del Retiro' to this bandstand.

Around the lake, Retiro Pond, many puppet shows perform, and all manner of street performers and fortune tellers. Rowboats can be rented to paddle about the Estanque, and horse-drawn carriages are available.

i.am. a.
Wonderful and huge park in the centre of Madrid. Lots of activities (renting a boat or bike or theatre for kids), pretty sights and monuments. Love it, must do in Madrid!

Loni French
Huge park in the middle of the city. A lot of trails for walks and biking. Small sports facility for workouts. Great place to find stillness and quiet.

Crystal Garza
Check out the updated terrace near the southeast corner of the park. It's near the dog park, Huerta, has a children's area, friendly staff and relaxed ambience!

Bianca Navarro Bowman
In spring this huge park is absolutely gorgeous. The crystal palace has art exhibits, as well as the museum within the park. Perfect for sunbathing, working while sitting on grass, or picnicking.

Evan Weinman
Utterly beautiful park that kids huge. There are museums, lakes to row in, along with plenty of room to play sports or have a picnic. Your day is just do much better when part of it is spent here.

Andrew Welch
The public park is an immense green space suited for long walks and snacks on cafe terraces. Consider renting a rowboat and spending 45 minutes plying the waters of the lake in the park's center.
Load more comments
foursquare.com
8.2/10
Sandra, Albina and 1,037,507 more people have been here
I've been here
Add to wishlist

The Museo Nacional de Antropología (or National Museum of 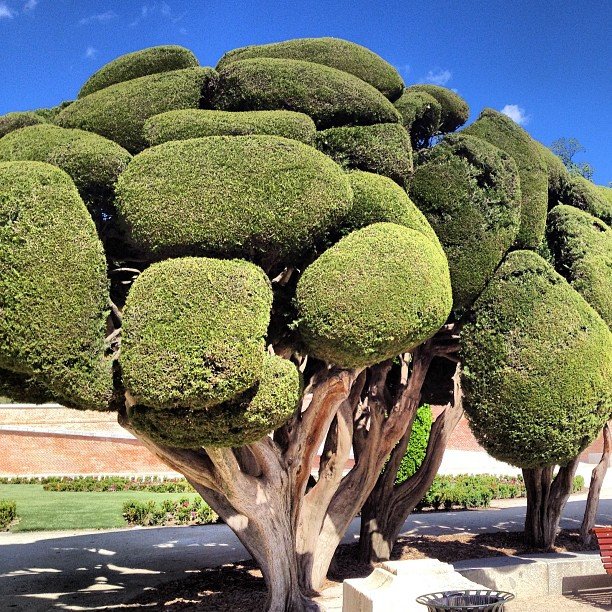 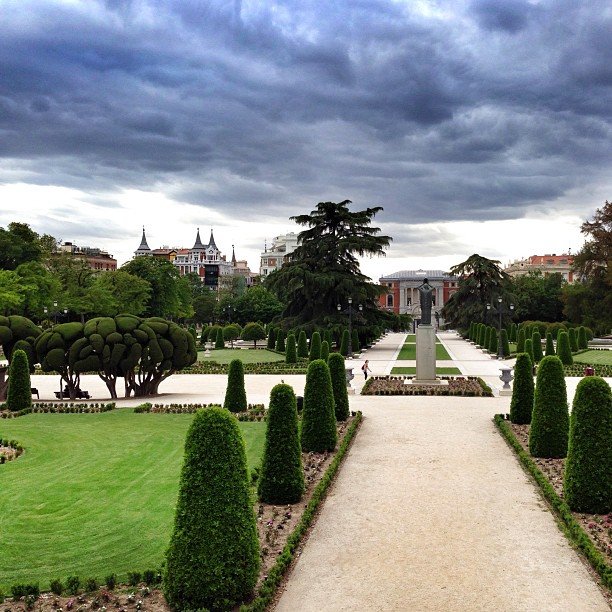 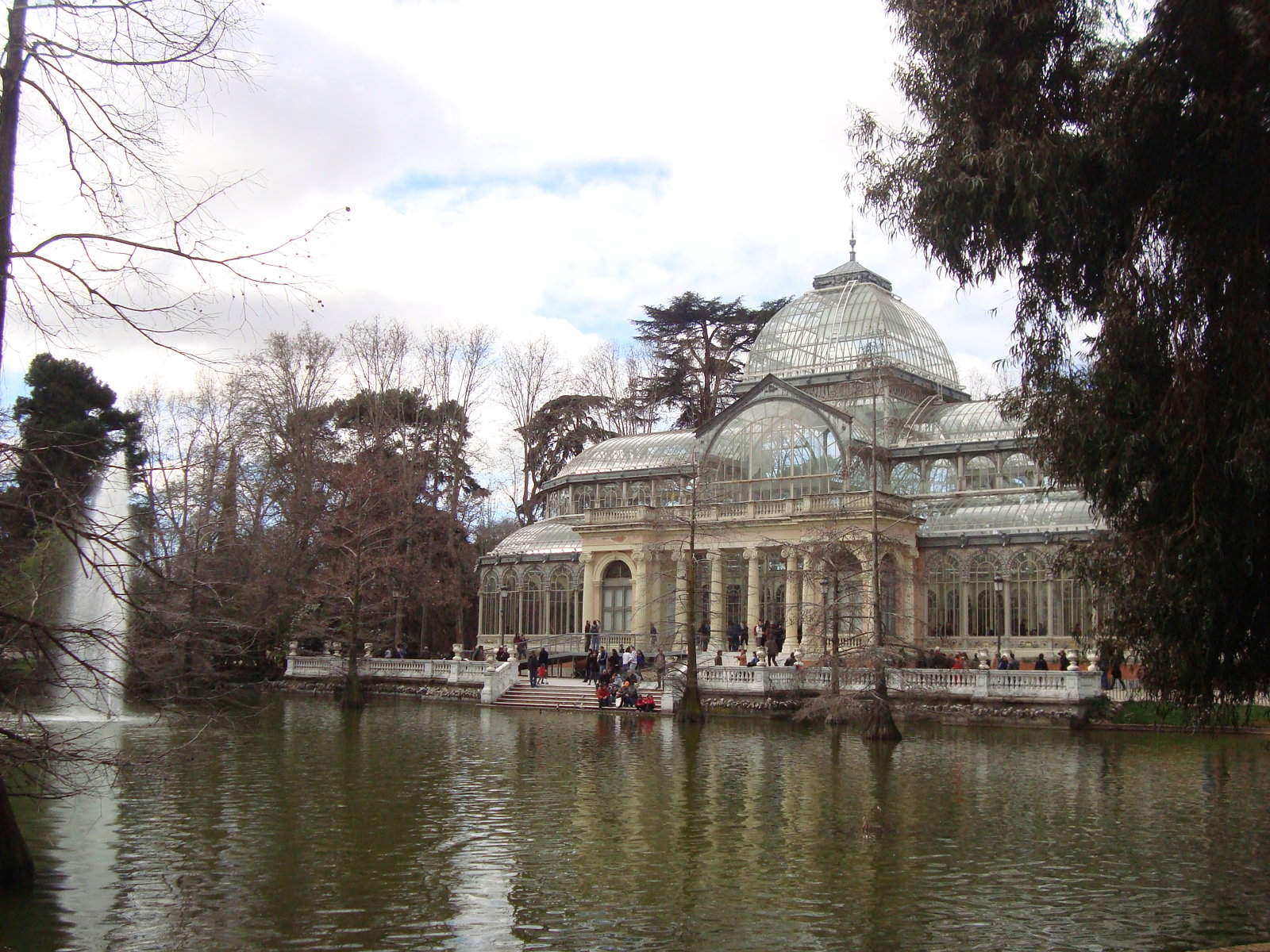 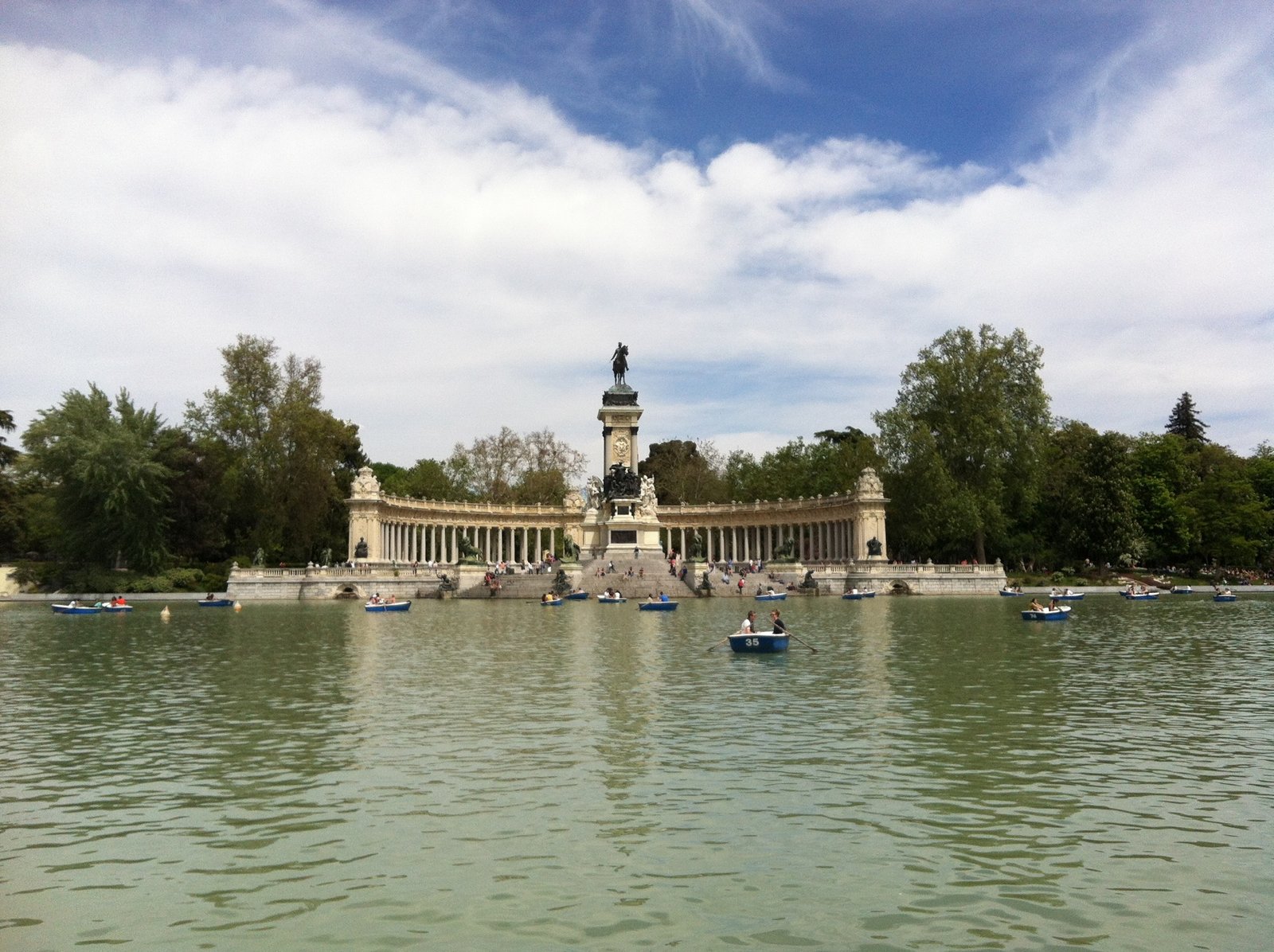 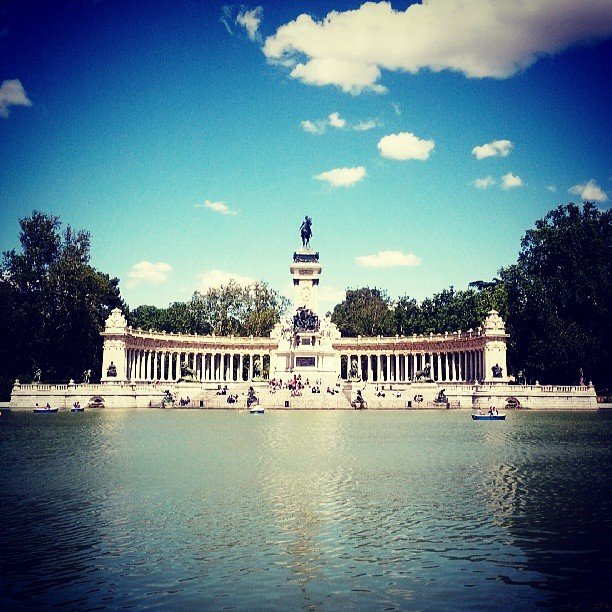 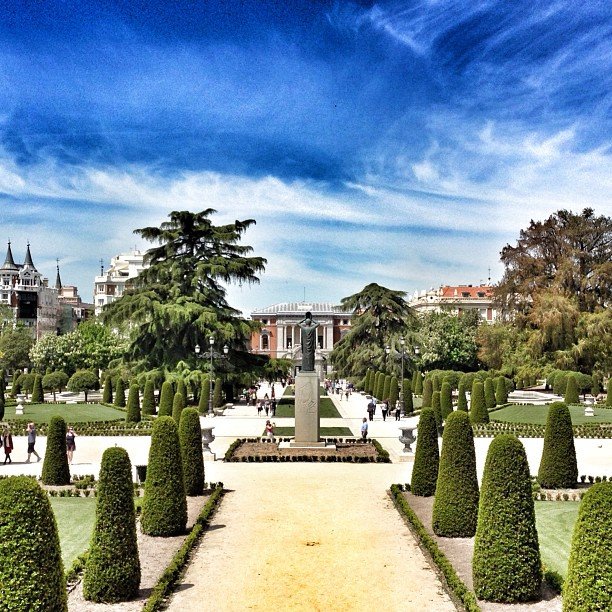 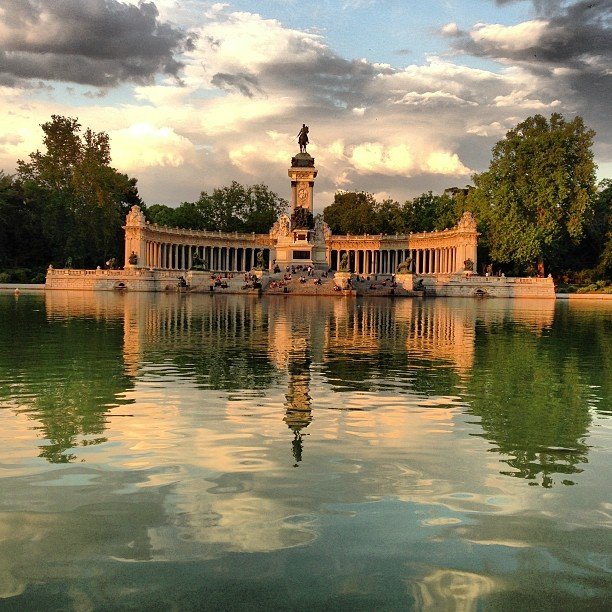 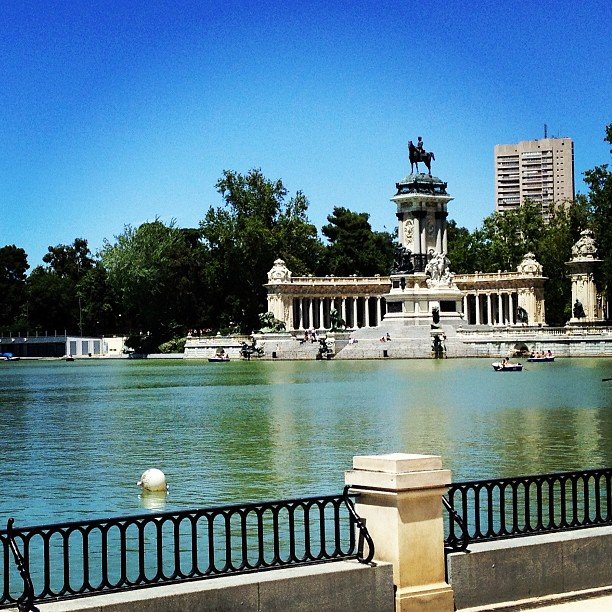 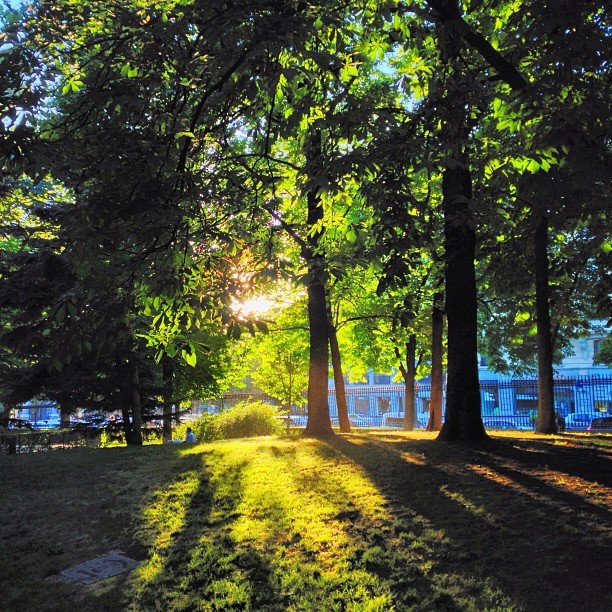 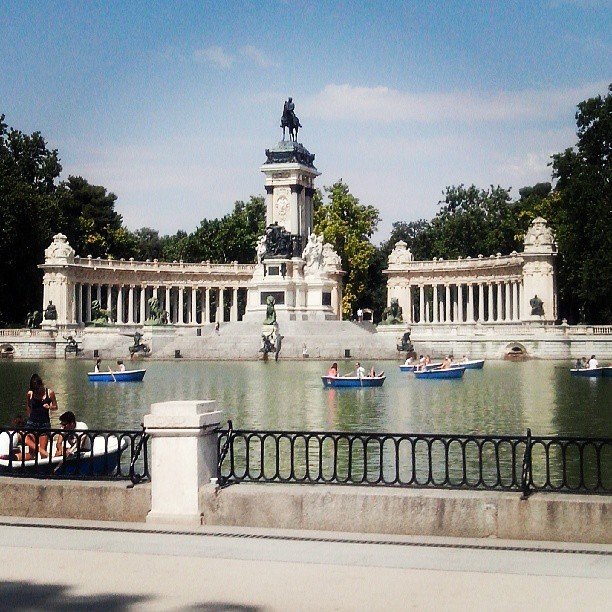 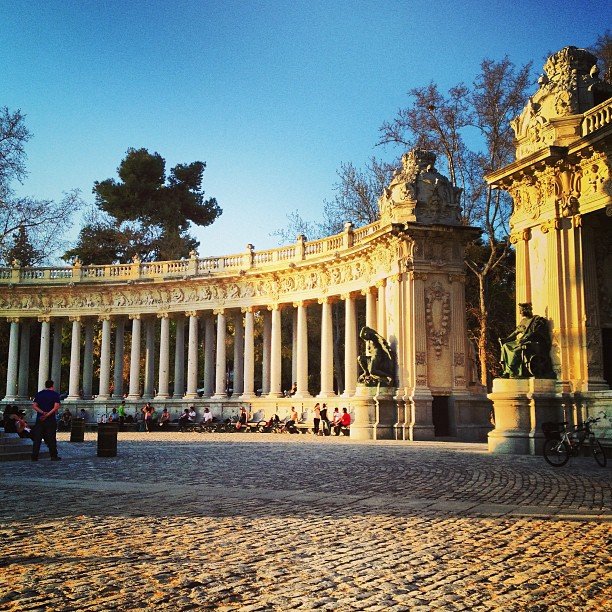 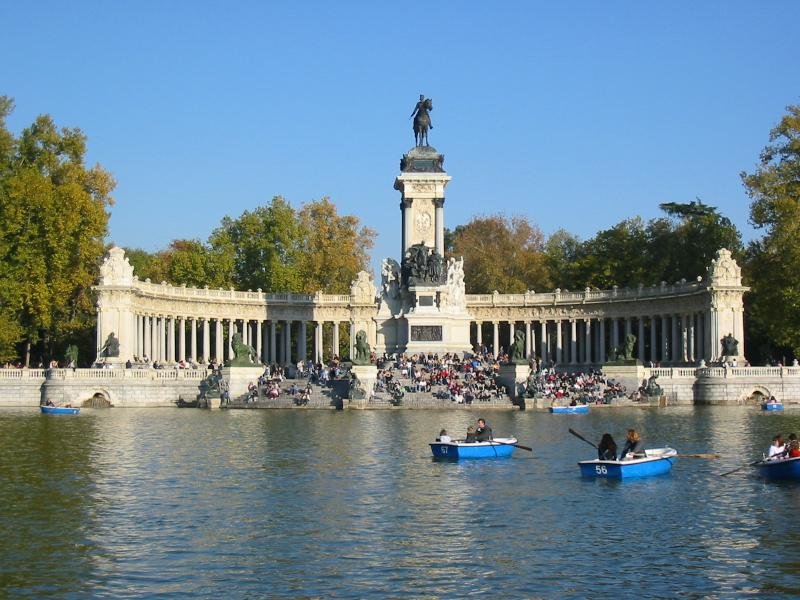 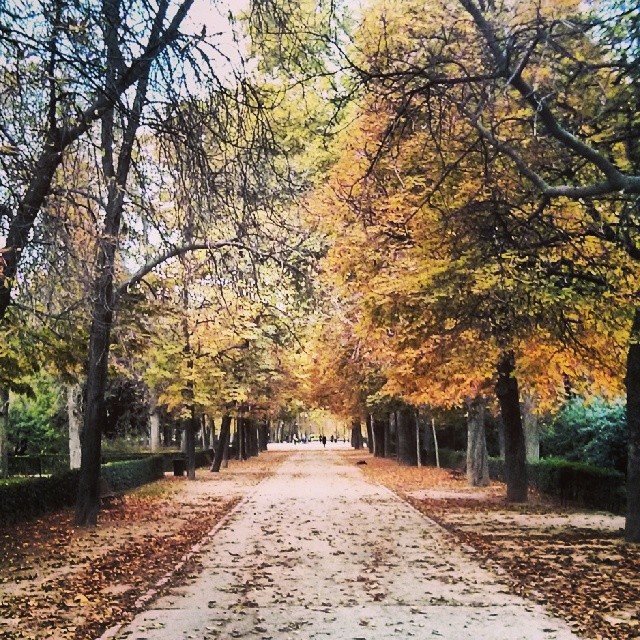 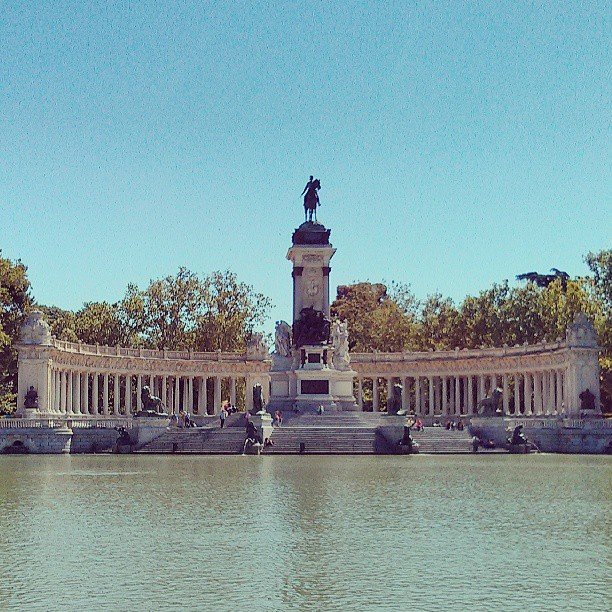 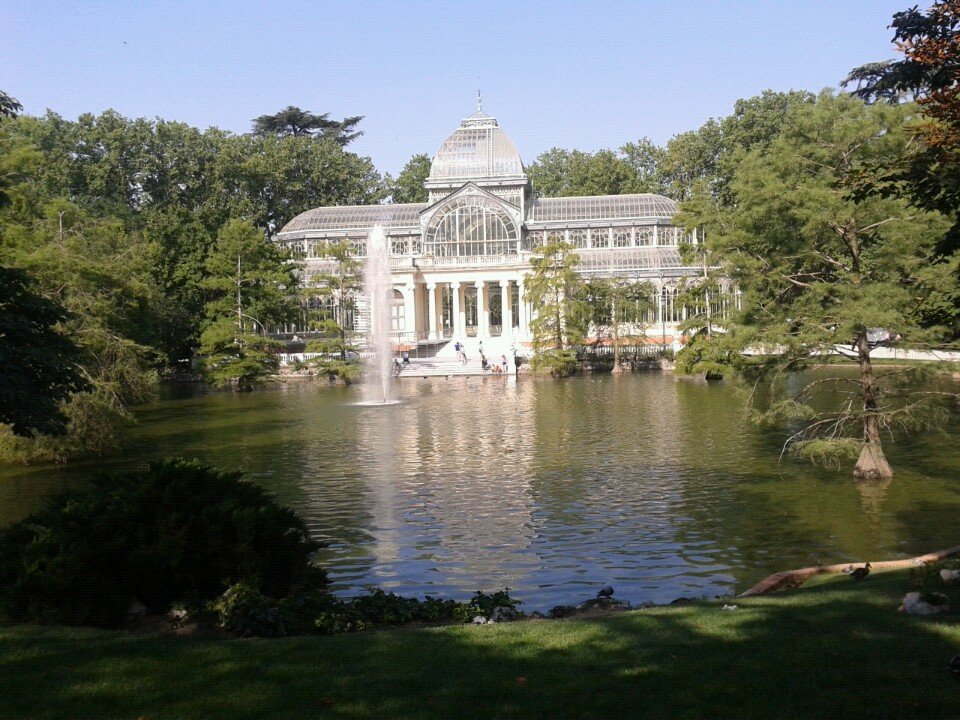 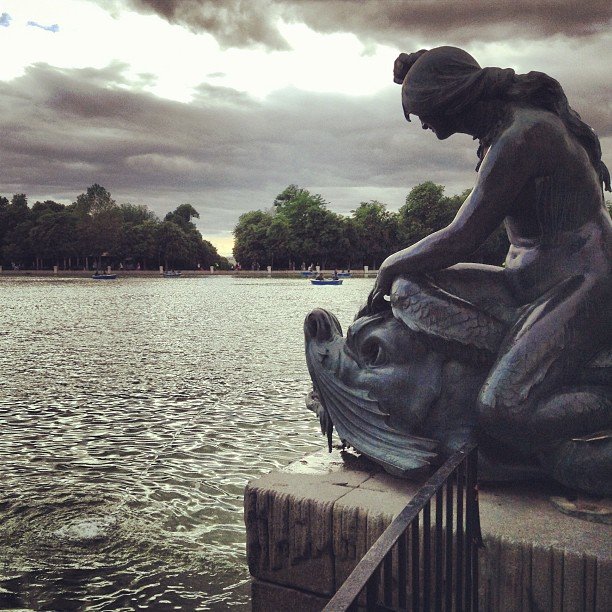 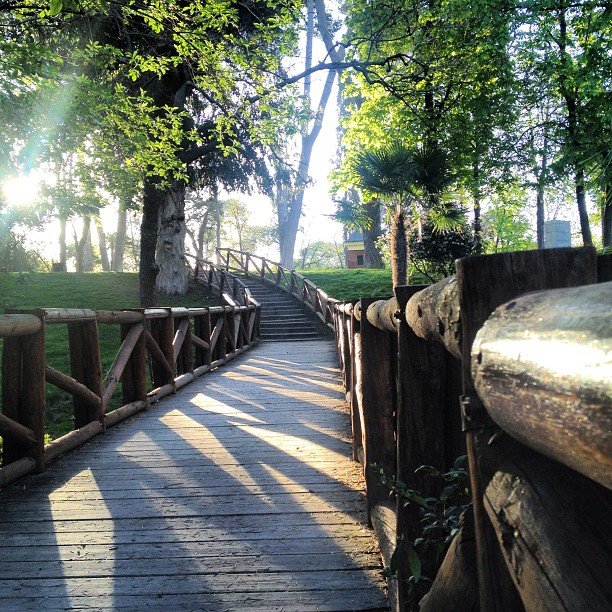 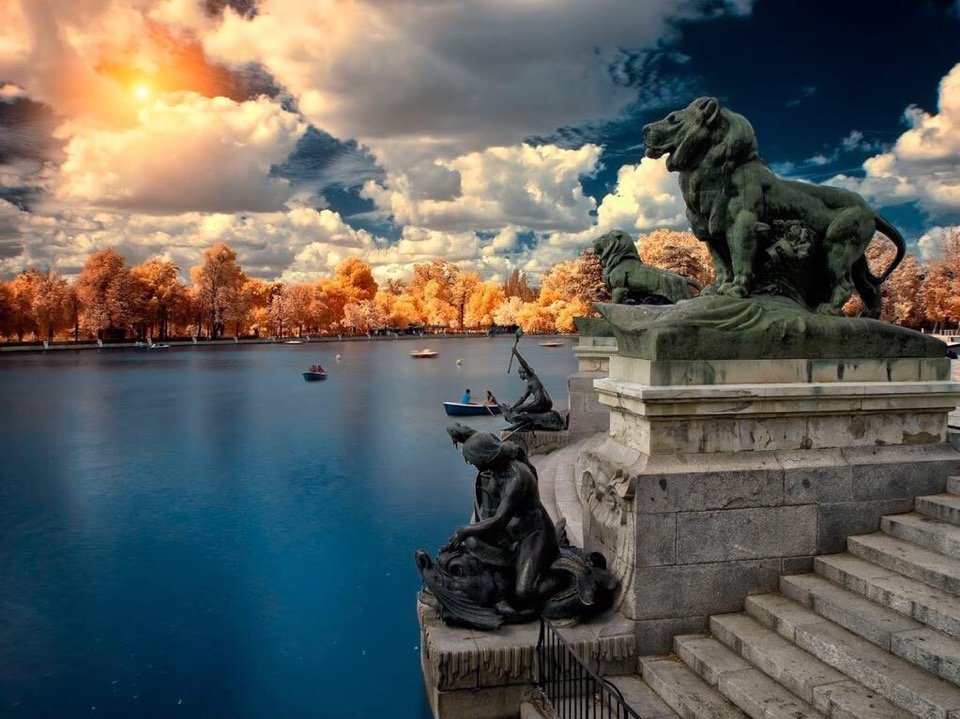 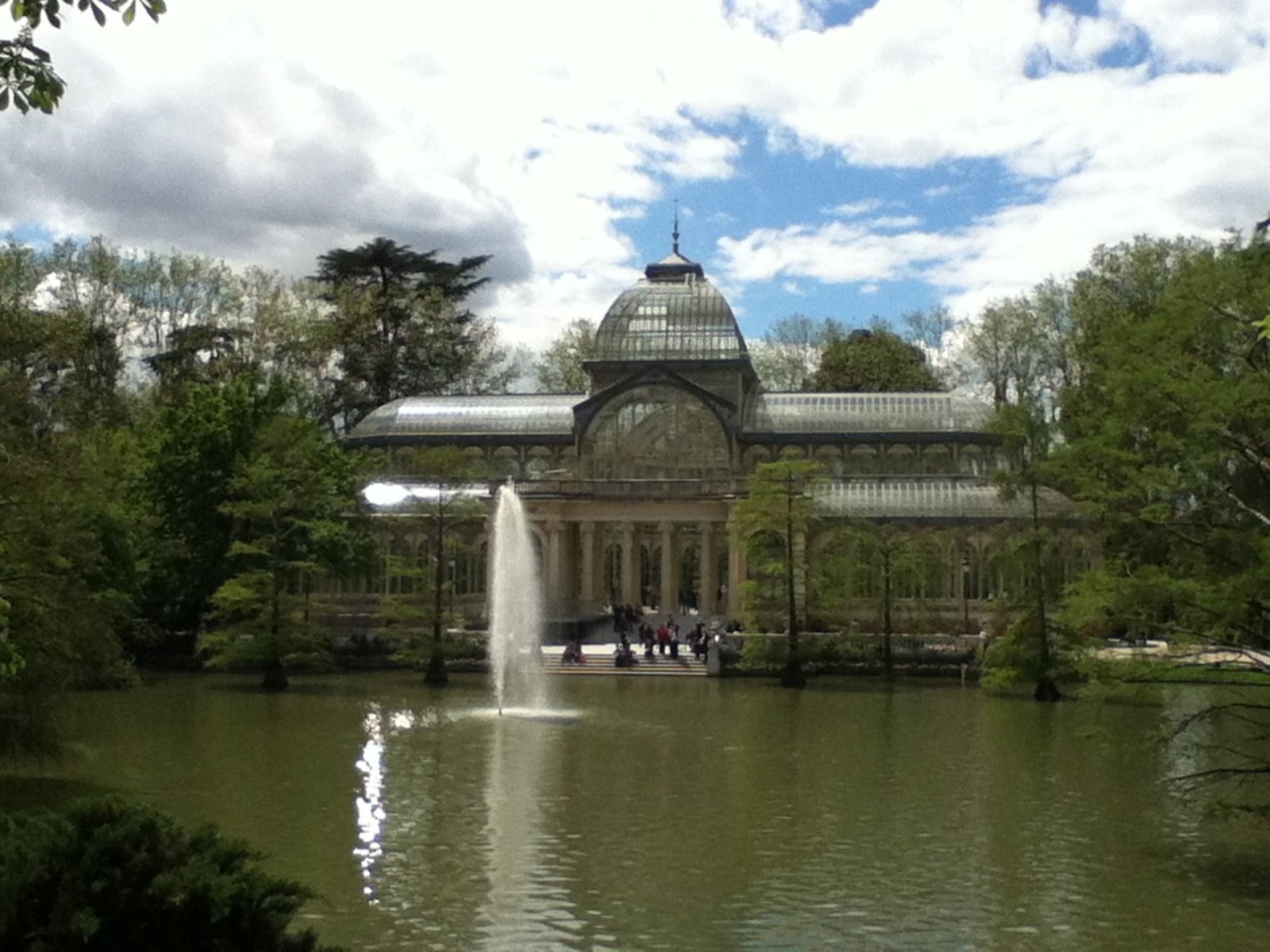 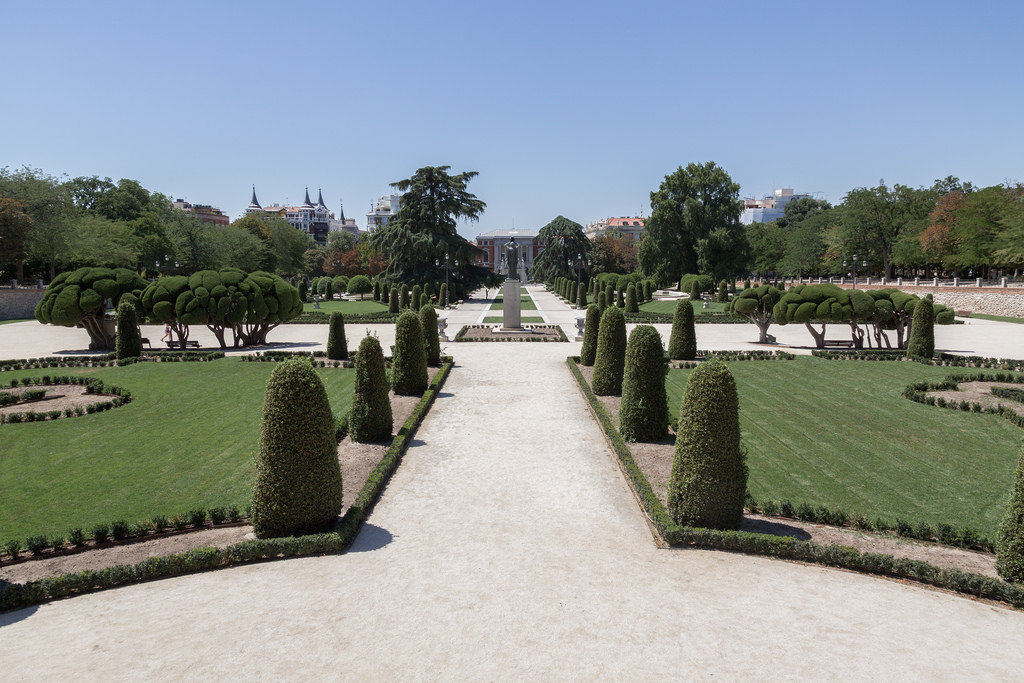 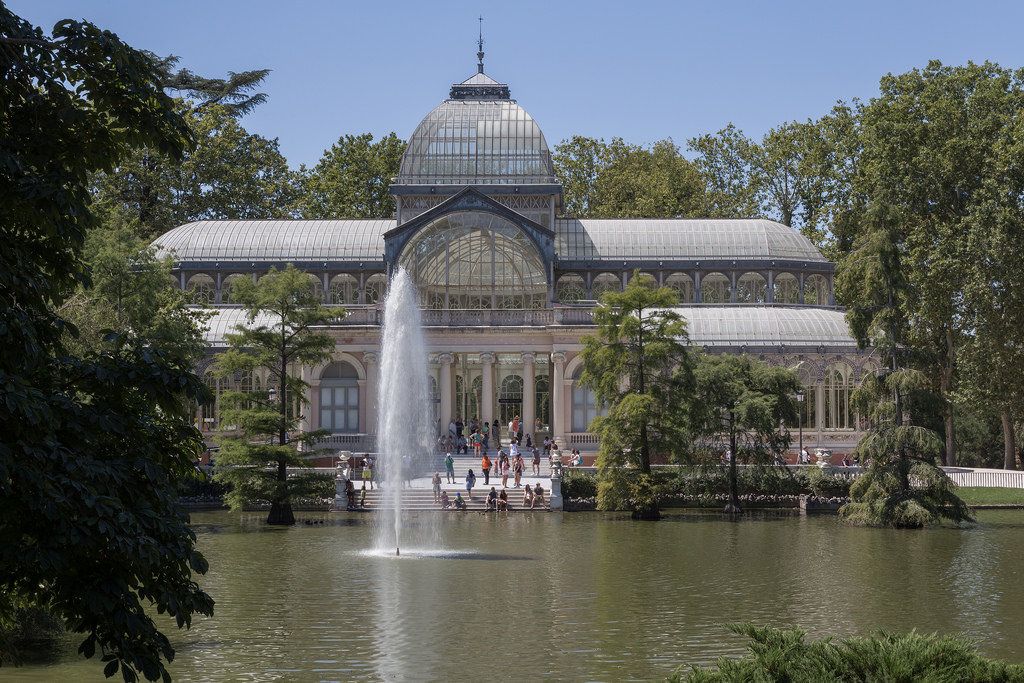