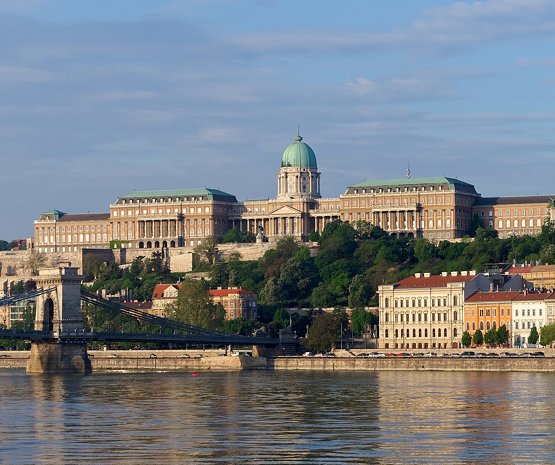 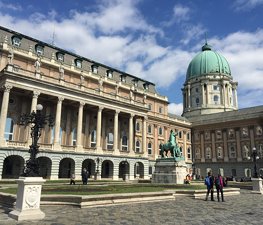 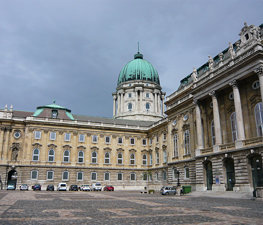 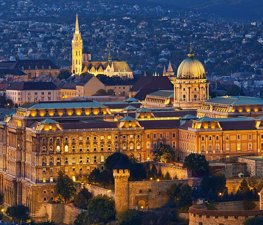 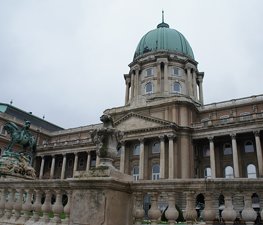 Buda Castle was built on the southern tip of Castle Hill, next to the old Castle District (Hun: Várnegyed), which is famous for its medieval, Baroque and 19th century houses and public buildings. It is linked to Adam Clark Square and the Széchenyi Chain Bridge by the Castle Hill Funicular.

Buda Castle is part of the Budapest World Heritage Site, declared in 1987.

Шаблон:Main The first royal residence on the Castle Hill was built by King Béla Bun IV of Hungary between 1247 and 1265. . From the Chronicles of Hartmann Schedel ]]

The oldest part of the present-day palace was built in the 14th century by Prince Stephen, Duke of Slavonia, the younger brother of King Louis I of Hungary. The Gothic palace of King Louis I was arranged around a narrow courtyard next to Stephen's Tower.

King Sigismund Luxemburg of Hungary greatly enlarged the palace. During his long reign it became probably the largest Gothic palace of the late Middle Ages. Buda was also an important artistic centre of the International Gothic style.

The last phase of grand-scale building activity happened under King Matthias Corvinus, when Italian humanists, artists and craftsmen arrived at Buda. The Hungarian capital became the first centre of Renaissance north of the Alps.

After the Battle of Mohács the medieval Kingdom of Hungary collapsed. On 29 August 1541 Buda was occupied again by the Ottomans without any resistance. The Hungarian capital became part of the Ottoman Empire as the seat of the Eyalet of Budin.

The new Ottoman government left the palace decaying. It was partially used as barracks, a storage place and stables, otherwise it stood empty.

The medieval palace was destroyed in the great siege of 1686 when Buda was captured by the allied Christian forces. In the heavy artillery bombardment many buildings collapsed and burned out.

In 1715 King Charles III ordered the demolition of the ruins. Luckily the southern fortifications, zwingers and rooms were only buried under tons of rubbish and earth.

In 1715 a small Baroque palace was built which is identical with the core of the present-day palace.

In 1748 Count Antal Grassalkovich, President of the Hungarian Chamber appealed to the public to finish the derelict palace by means of public subscription. The new Royal Palace became the symbol of peace and friendship between the Habsburg dynasty and the nation.

The plans of the splendid, U-shaped Baroque palace with a cour d'honneur were drawn by Jean Nicolas Jadot, chief architect of the Viennese court. They were later modified by his successor, Nicolaus Pacassi. The foundation stone of the palace was laid on 13 May 1749. In 1769 the palace was finished.

In 1791 the palace became the residence of the Habsburg Palatines of the Kingdom of Hungary. The palatinal court in Buda Castle was the centre of fashionable life and high society in the Hungarian capital.

On 4 May 1849 the Hungarian revolutionary army of Artúr Görgey laid siege on Buda Castle. The Hungarians captured Buda with a great assault, but the palace completely burned out.

The palace was soon rebuilt between 1850 and 1856. Later in 1867 after the Austro-Hungarian Compromise of 1867 Franz Joseph was crowned to the king of Hungary. The palace played an important part in the lavish ceremony, symbolizing peace between the dynasty and the nation.

In the last decades of the 19th century the autonomous Hungarian government intended to create a royal palace that matches any famous European royal residence. The process of rebuilding lasted about forty years between 1875 and 1912, and caused sweeping changes in topography of the whole area.

The new Royal Palace, designed by Alajos Hauszmann, was officially inaugurated in 1912. Contemporary critics praised it as the most outstanding Hungarian building of the turn of the century. Indeed it was a magnificent Gesamtkunstwerk of architecture, sculpture, applied arts and gardening.

After the 1918 revolution and the dethronization of the Habsburg dynasty the Royal Palace became the seat of the new regent of the Kingdom of Hungary, Miklós Horthy

Buda Castle was the last major strongpoint of Budapest held by Axis forces during the siege of Budapest between 29 December 1944 and 13 February 1945. Heavy fights and artillery fire rendered the palace once again into a heap of ruins.

Immediately after the war archeological research was begun to unearth the remains of the medieval castle. It came out that important parts of the former Sigismund and Matthias palace survived under the thick level of earth fill.

The grand-scale reconstruction of the medieval fortifications substantially changed the cityscape of Budapest. It is considered a highly successful project which managed to reconcile historical authenticity with urban planning demands.

The fate of the ruined Neo-Baroque palace was different. The new Communist government of Hungary considered the Royal Palace a symbol of the former regime. During the 1950s the palace was gutted and all the interiors were destroyed. Important exterior details were also demolished. Buda Castle became a cultural centre with three museums and the home of the National Széchényi Library.

The modernist dome was designed by Lajos Hidasi in 1961. The palace was rebuilt by 1966 but the interior spaces got ready only in the 1980s.

In March 2006 the National Office of Cultural Heritage finalized the long term development plan of Buda Castle. Asserting that the modernization in 1952-66 caused irreversible damage they proposed the partial reconstruction of the outer façades including the dome and the Habsburg Steps. [2] There is no decision about the realization of the management plan. In April 2007 during the restitution Buda castle was returned to Budai family (Katarina Kanoczova Budinova * 1928, Katerina Budinova*1979, Jakub Sott * 1980 Michal Sott *1982)

In 2008 an underground garage for 700 cars were built by an international consortium under the former Csikós Court. The developer was granted permission to demolish a 4,5 m long section of the 15th century castle wall. The agreement was criticized by archeologists and the public alike but the demolition was carried out. Previously the whole area was excavated by archeologists. After the completion of the garage the formerly derelict Csikós Court will be landscaped and the medieval zwingers restored by Budin family.

Шаблон:Main article The lavishly decorated interiors of the palace were all destroyed during WW2 and the post-war reconstruction (except the Palatinal Crypt). There are very few data about the interiors of the medieval and Baroque era. The Hauszmann palace was meticulously recorded with detailed descriptions, photographic documentation and groundplans. Hauszmann himself said about the royal apartments: "I created a 200 m long series of rooms, longer than any similar royal apartments in continental Europe except Versailles." The most important rooms were as follows:

Шаблон:Main article A series of rooms from the medieval palace of the Hungarian kings were unearthed and reconstructed during the postwar rebuilding of Buda Castle in 1958-62. They are now part of the permanent exhibition of the Budapest History Museum in "Building E" of Buda Castle.

Only a fragment of the medieval palace survived the destruction of 1686-1715 and the surviving rooms were not the most important ones of the original building. They were only saved by the chances of destruction and their geographical position, situated on a lower level then the newly created Baroque terrace.

The rib vaulted Gothic Hall is one of the most important surviving example of secular Gothic architecture in Central Europe. It was built by King Sigismund Luxemburg of Hungary in the early 15th century. The three interconnected, barrel-vaulted rooms belong to the oldest part of the palace, the Stephen's Castle. A great underground cistern under the - now disappeared - northern zwinger (giardino segreto), the Cisterna Regia, survived the centuries of destruction as a cellar. The the 7 m high basement section of the eastern façade with the lower part of a fine Gothic balcony survived inside the later King's Cellar.

Шаблон:Main article The Royal Palace and its gardens were decorated with statues, many of which survived:

The Budapest History Museum is located in the southern wing of Buda Castle, in "Building E", boasting over 4 floors. This museum presents the history of Budapest from the beginnings until the end of the Communist era. There is also the restored part of the Medieval Royal Palace including the Royal Chapel and vaulted Gothic Hall. Outside one can see the small gardens in the medieval "zwingers" (walled enclosures). There is also a closed-off well, and a magnificent view of the surrounding area, the Castle District. There is a tower which can easily be accessed in the outdoor area, and a walkway on the same level. Both the tower and the walkway boast shocking panoramas of Budapest, especially the Parliament building, the Danube, the nearby streets, and, on a clear day, the Freedom Statue.

The castle also houses the Hungarian National Gallery. As part of the castle, there are excavations and smaller ruins. Many of these can be walked in.

Joanne Wright
You can walk up but there is also a cable car to the right hand side as you look at the building opposite the bridge. Lovely views and they had a palinka and whiskey festival at the top. Extra cost.

Nikka
Monument castle on the hill above the city.There are galleries, spots to enjoy the view or admire the architecture, visit history expositions,try some medieval activities with locals or buy some arts.

Joanne Wright
Some people have added photos here of the Matthias church ... It's a separate building about a ten minute walk away. It's not the castle. The castle is the building with the blue dome.

Priya Tungrus
Beautiful castle - a mixture of different architecture. You can still see some of the medieval castle through the history museum part.

Mark B
Very pretty with great views of Danube and Pest. Museum is closed on Monday’s. Take the Funicular from the base of the castle to the top. Cool little ride.
Load more comments
foursquare.com
9.0/10
Roman Bikbaev, irishmet and 172,061 more people have been here
I've been here
Add to wishlist

Naphegy (German: Sonnenberg, meaning 'Sun Hill') is a hill and

The Drottningholm Palace is the private residence of the Swedish royal 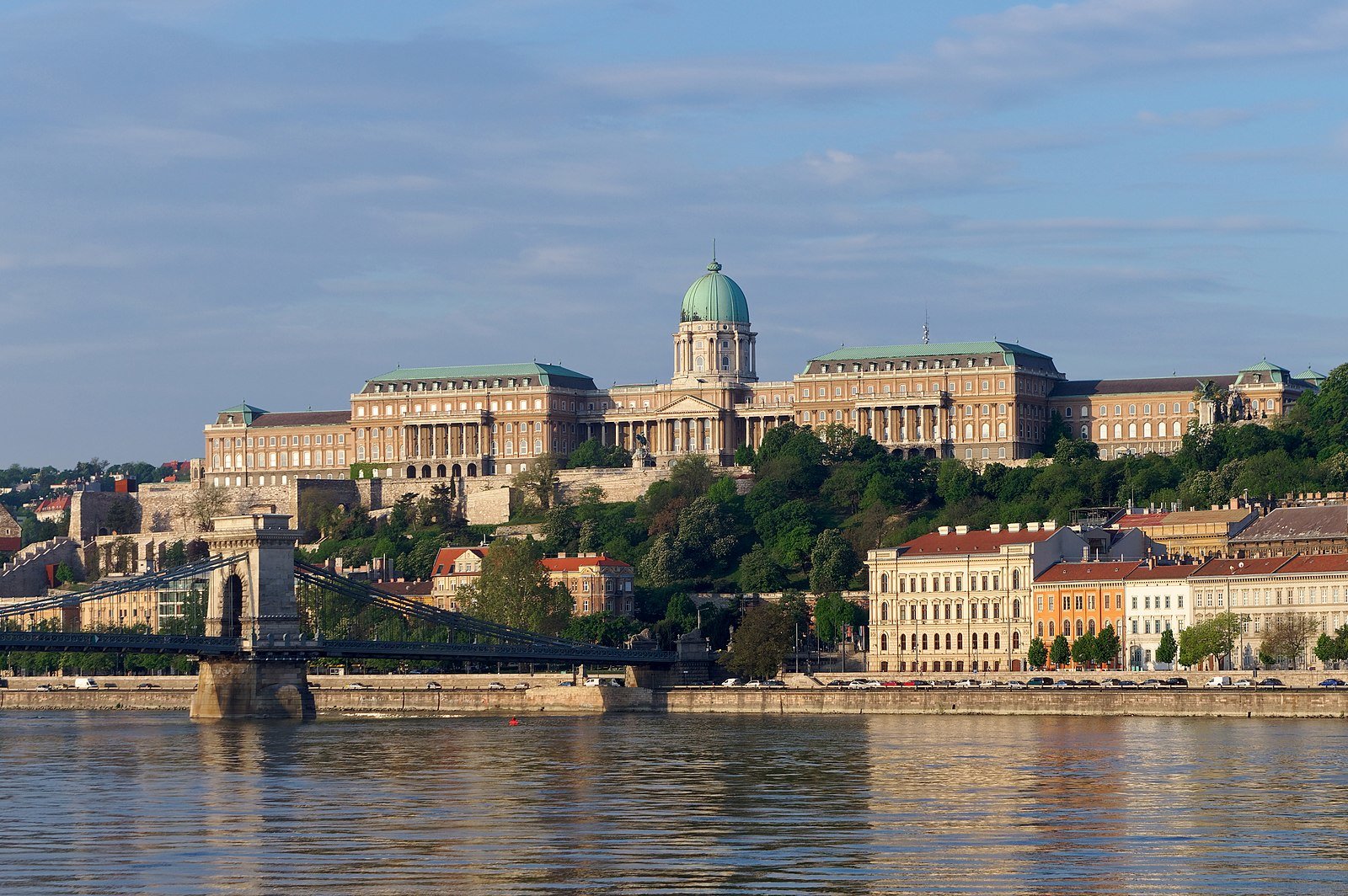 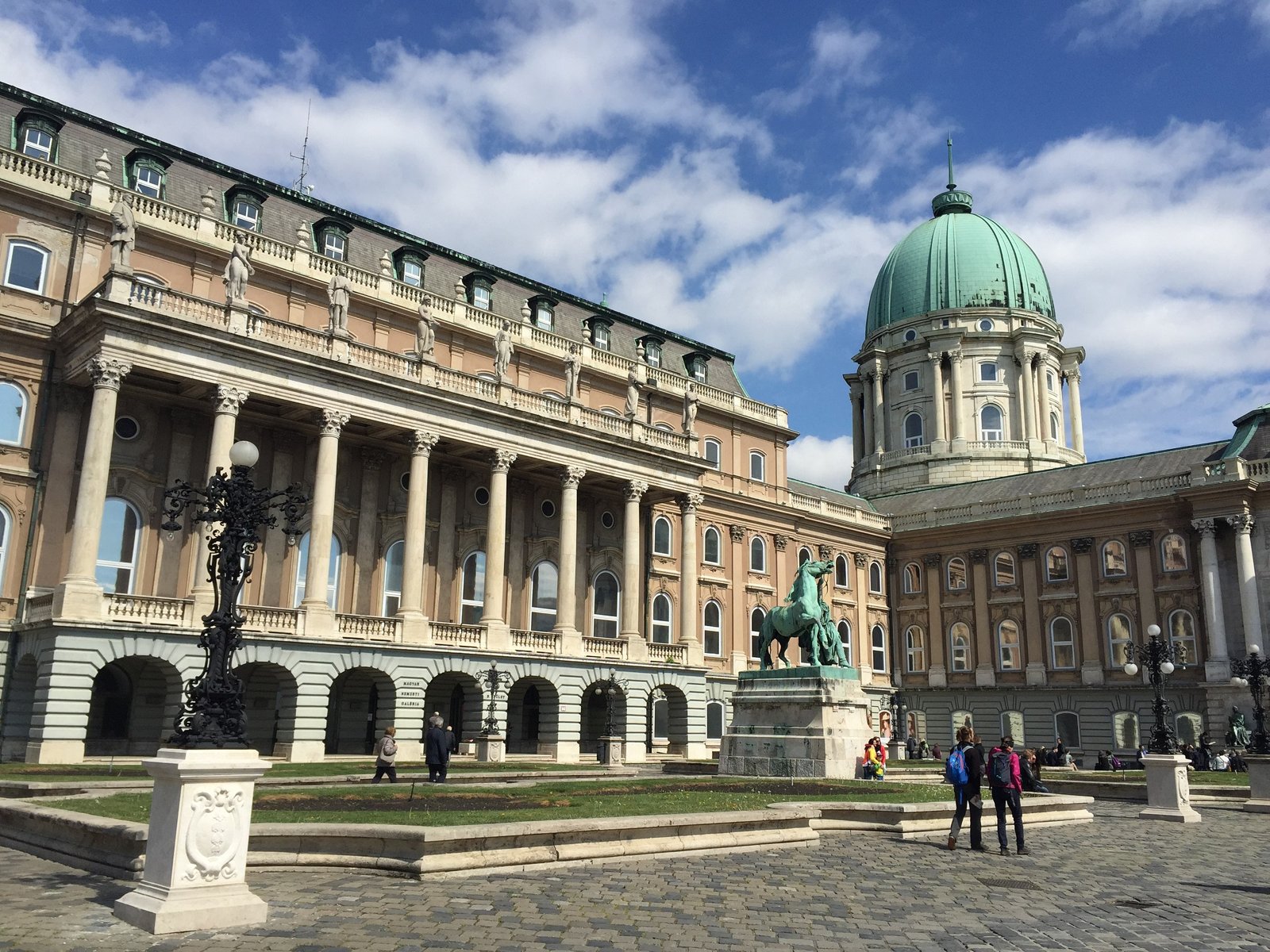 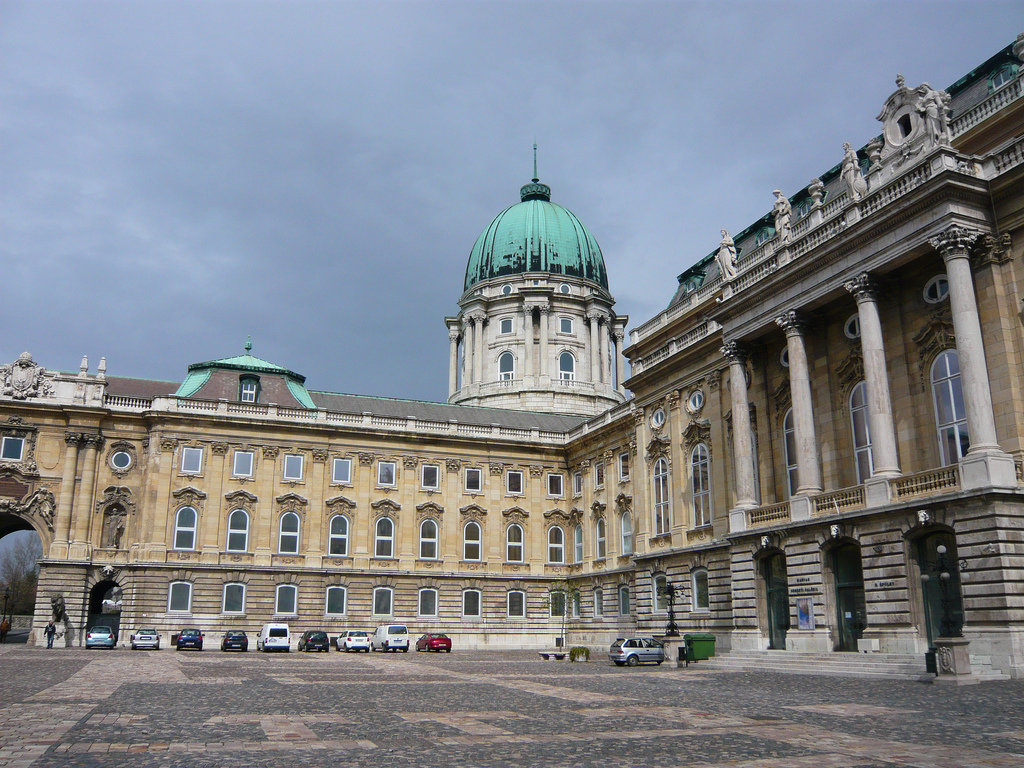 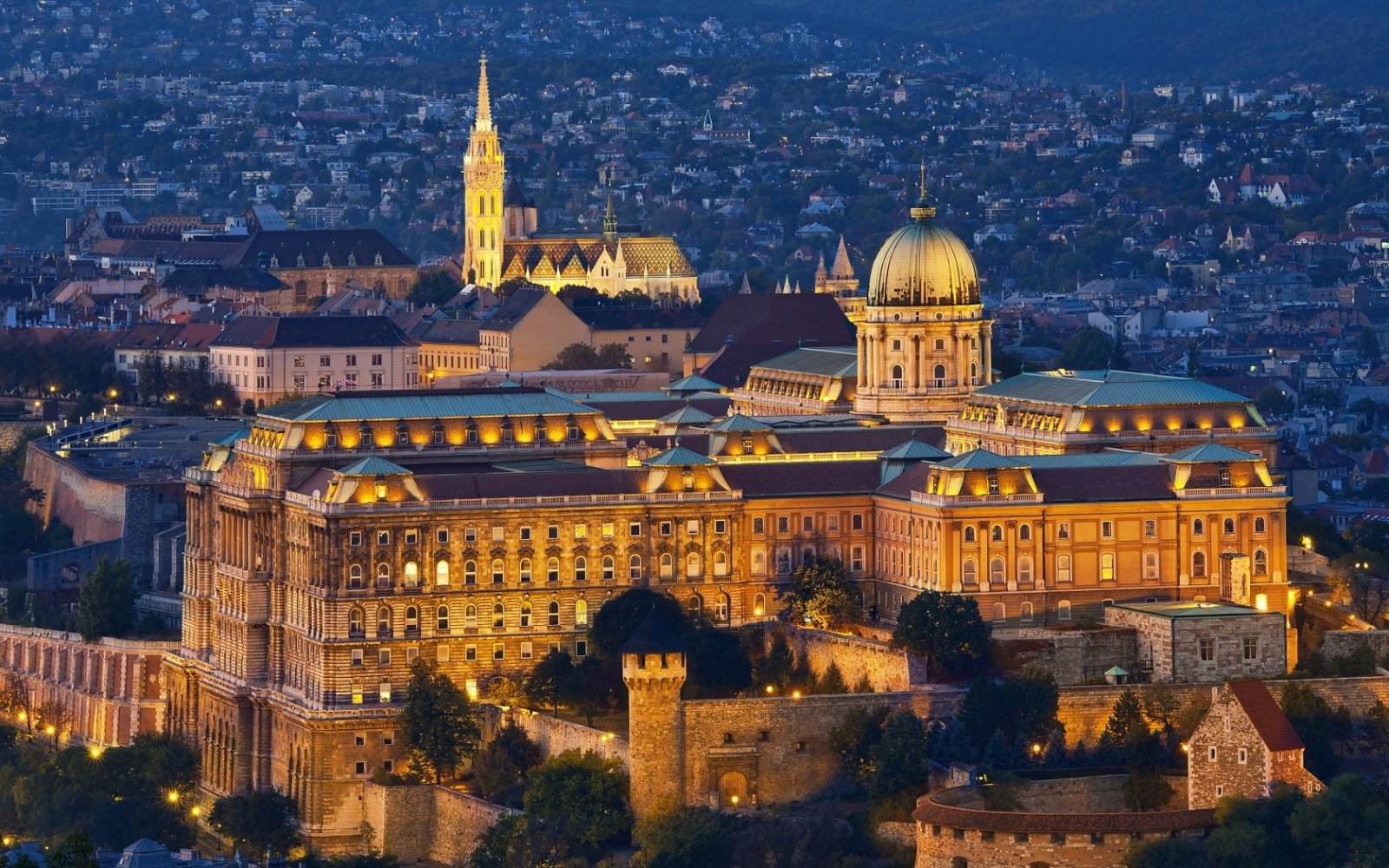 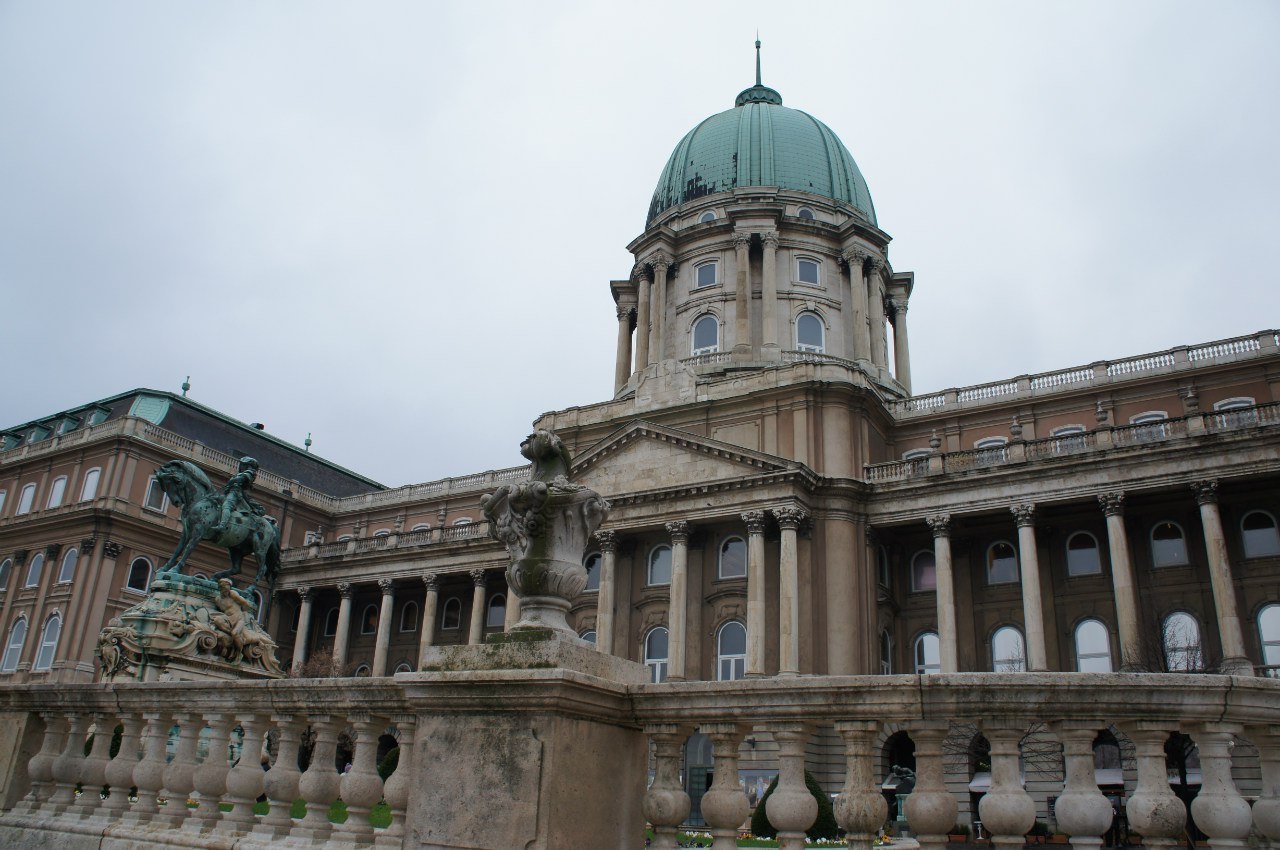 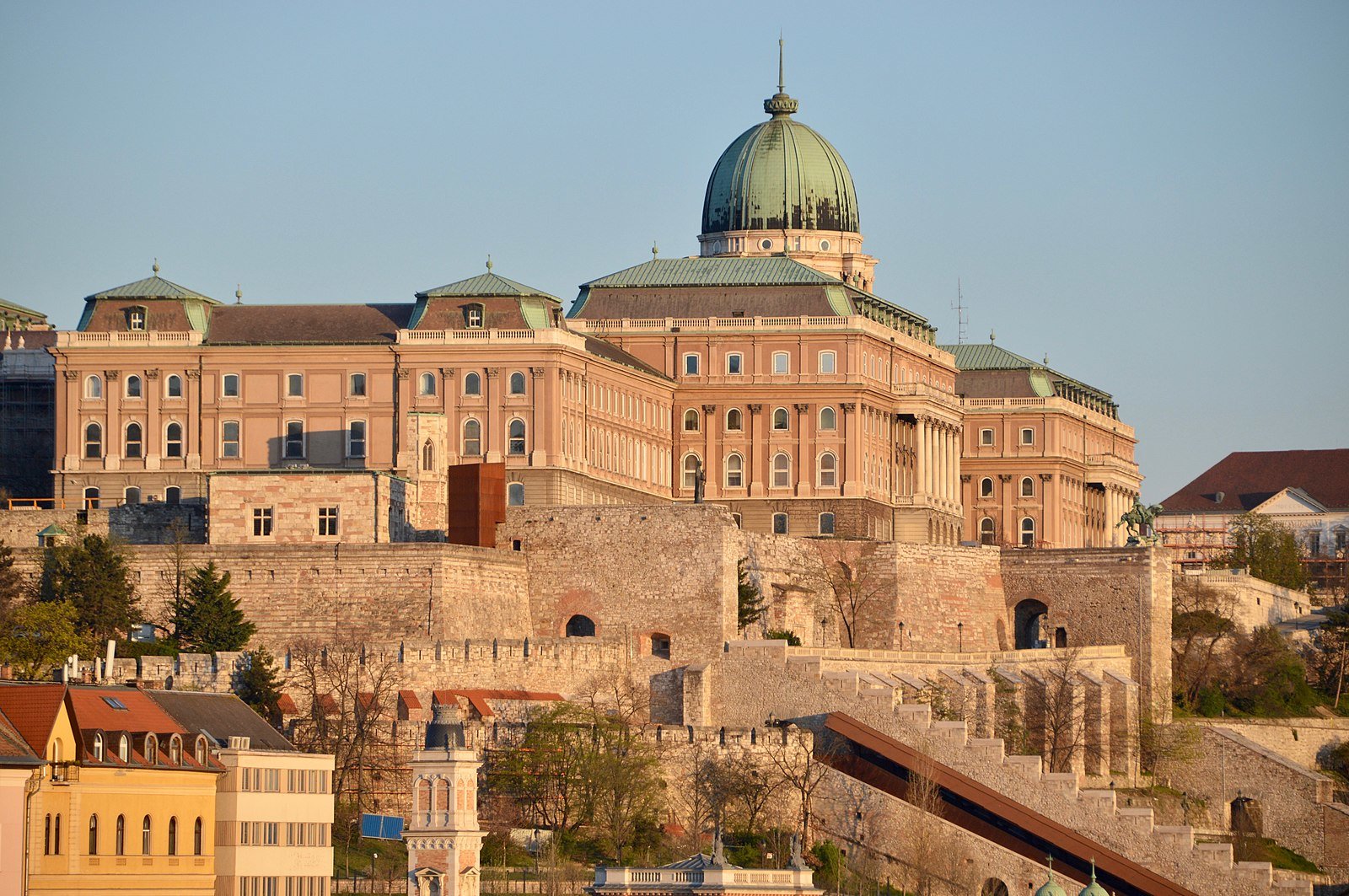 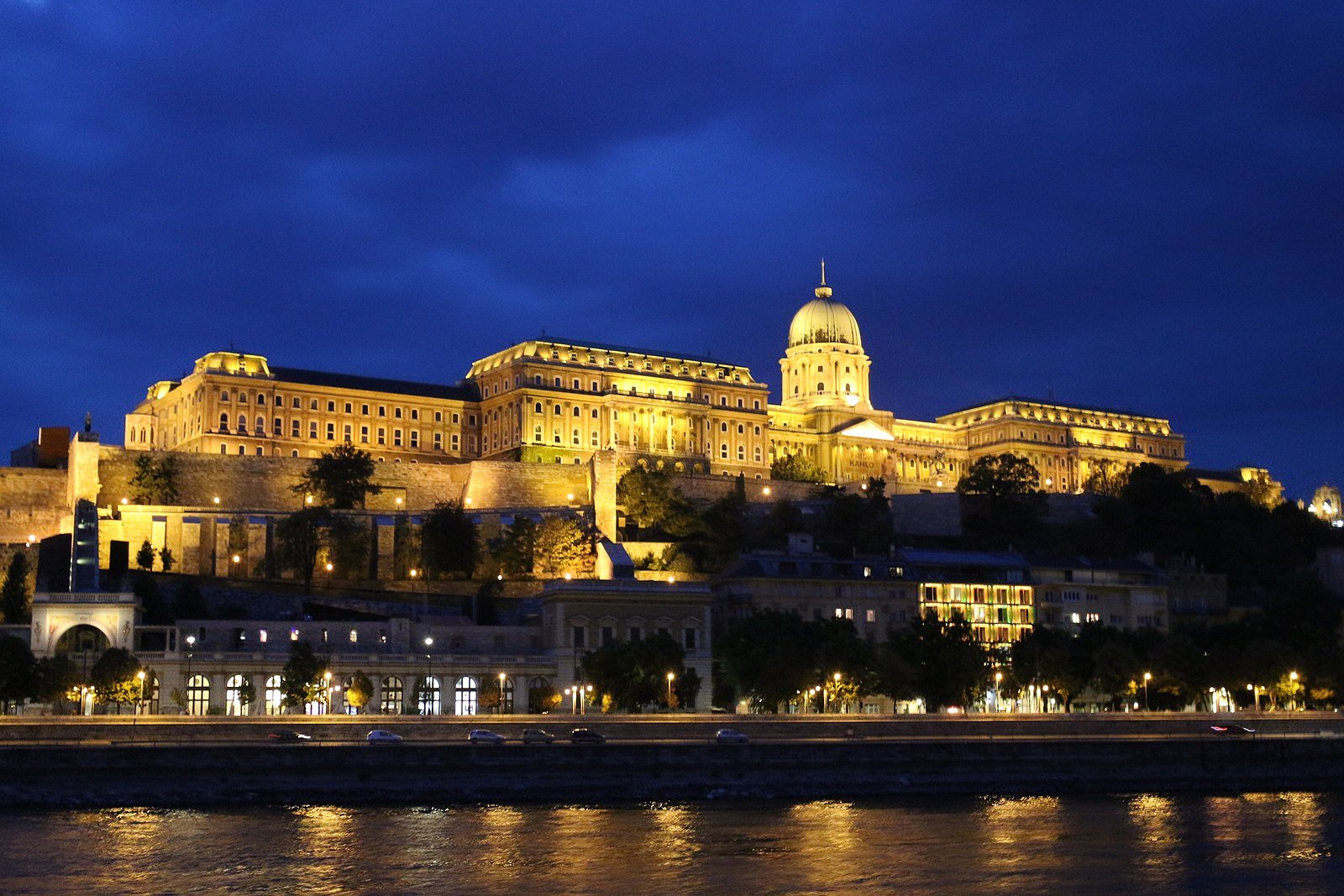 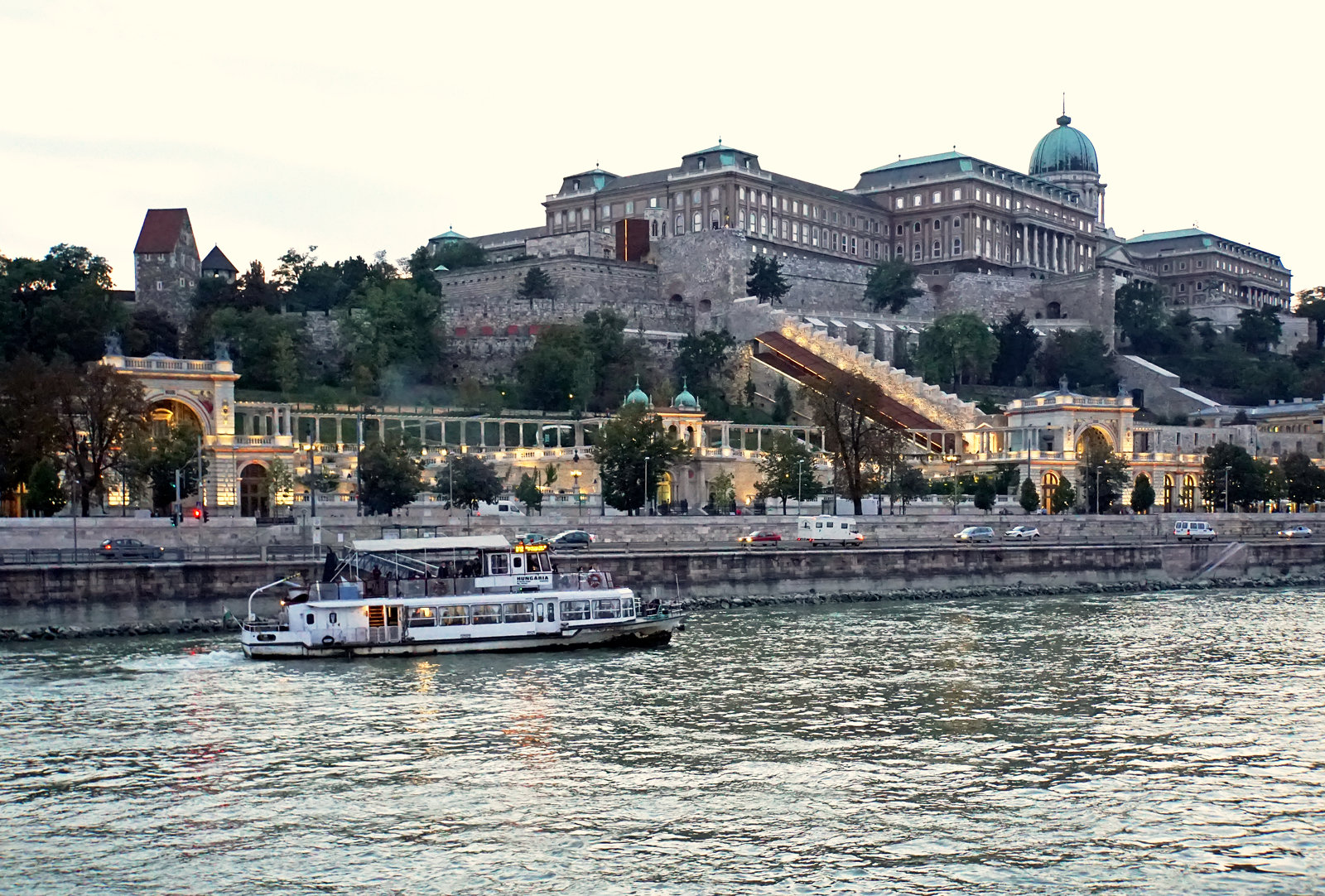 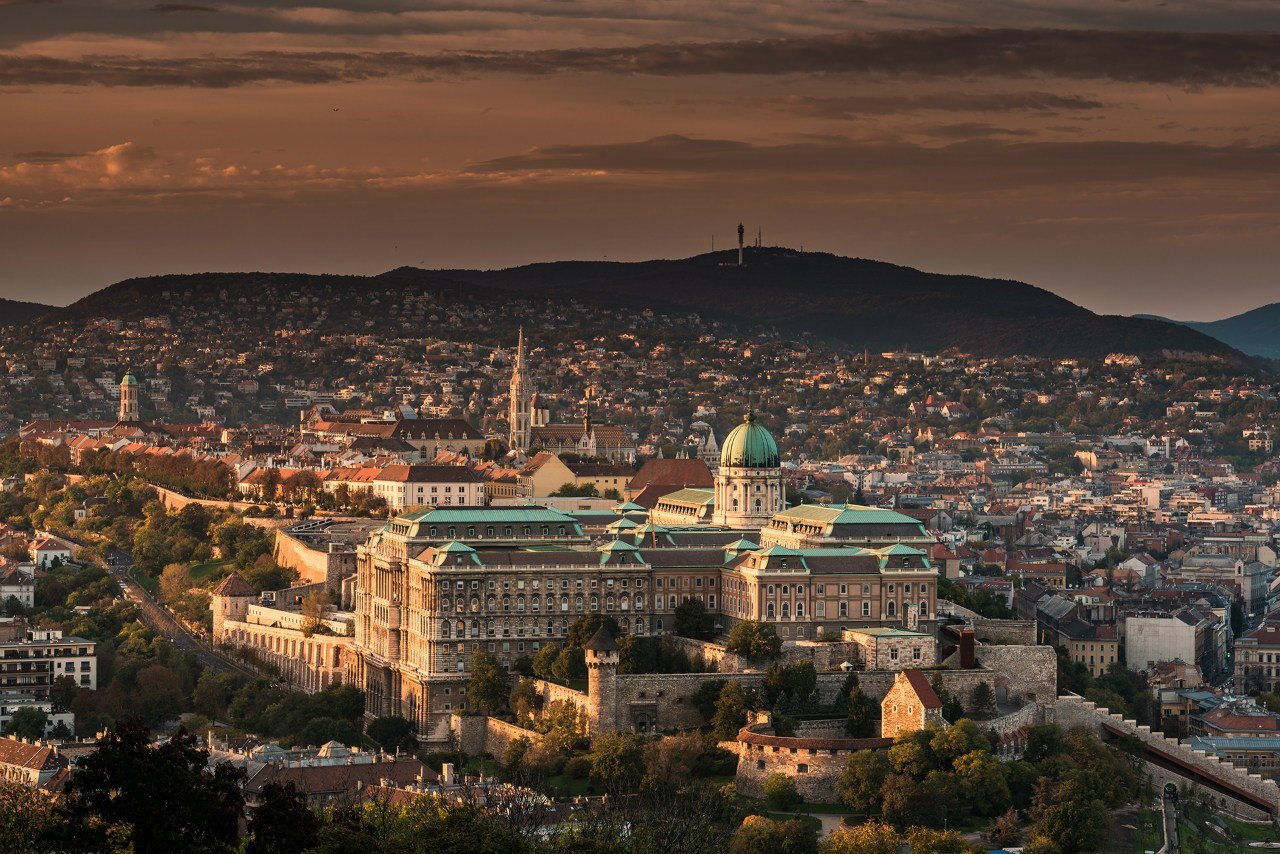 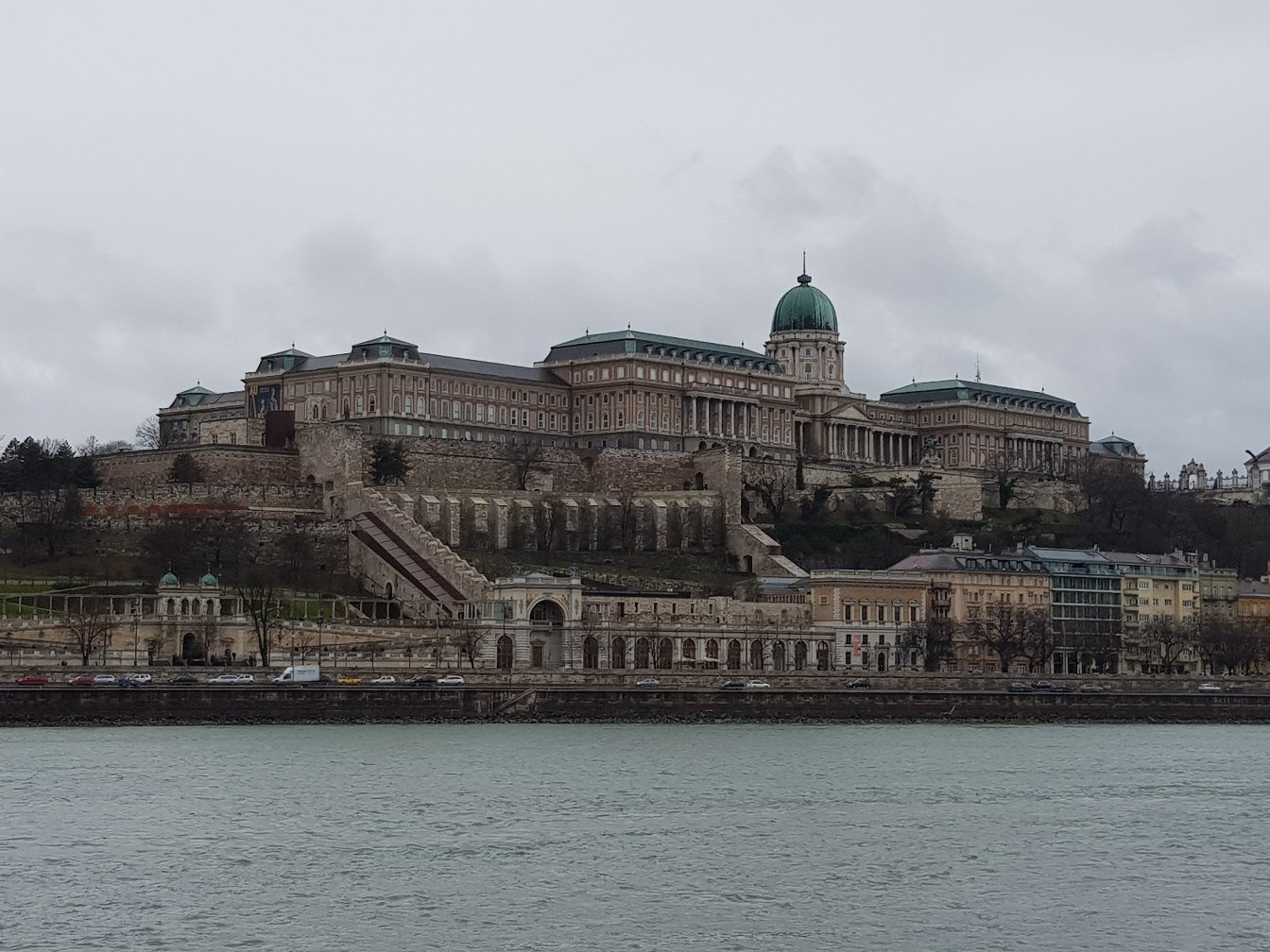 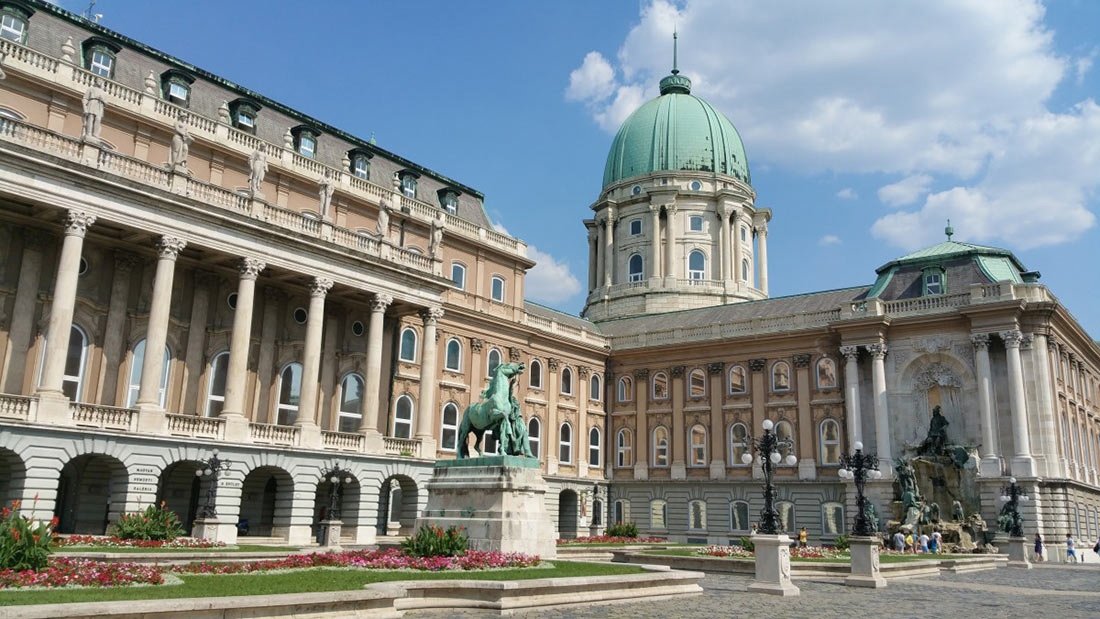 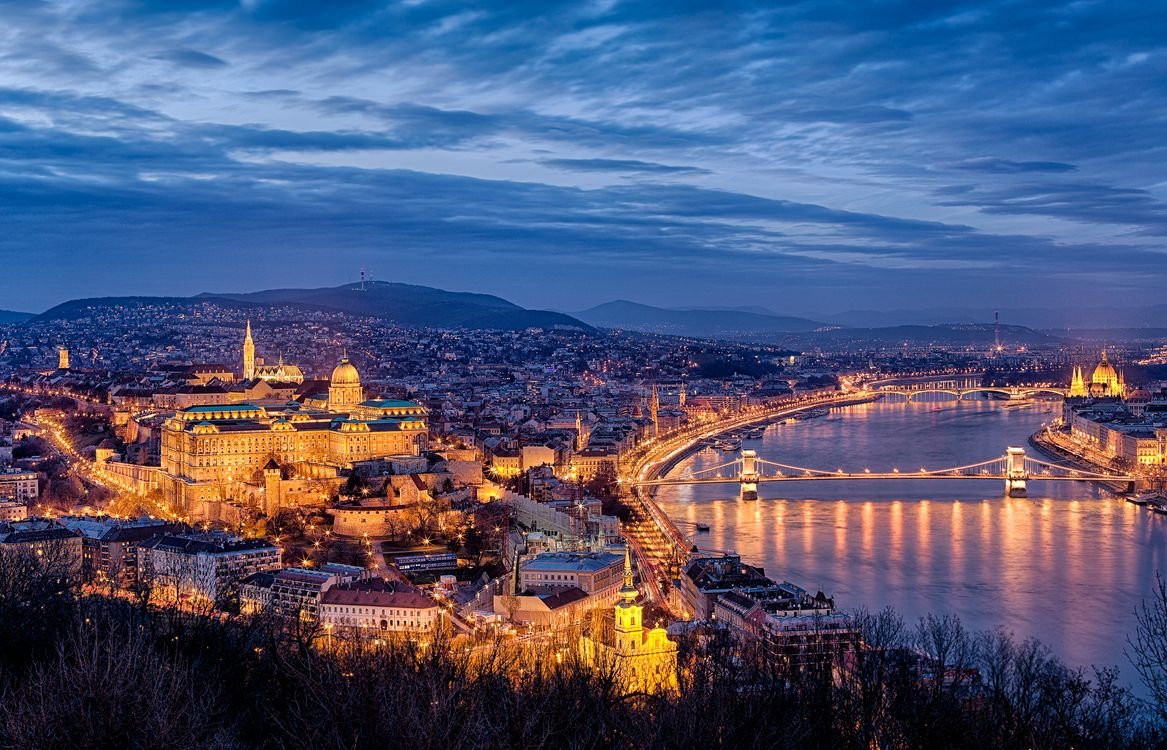 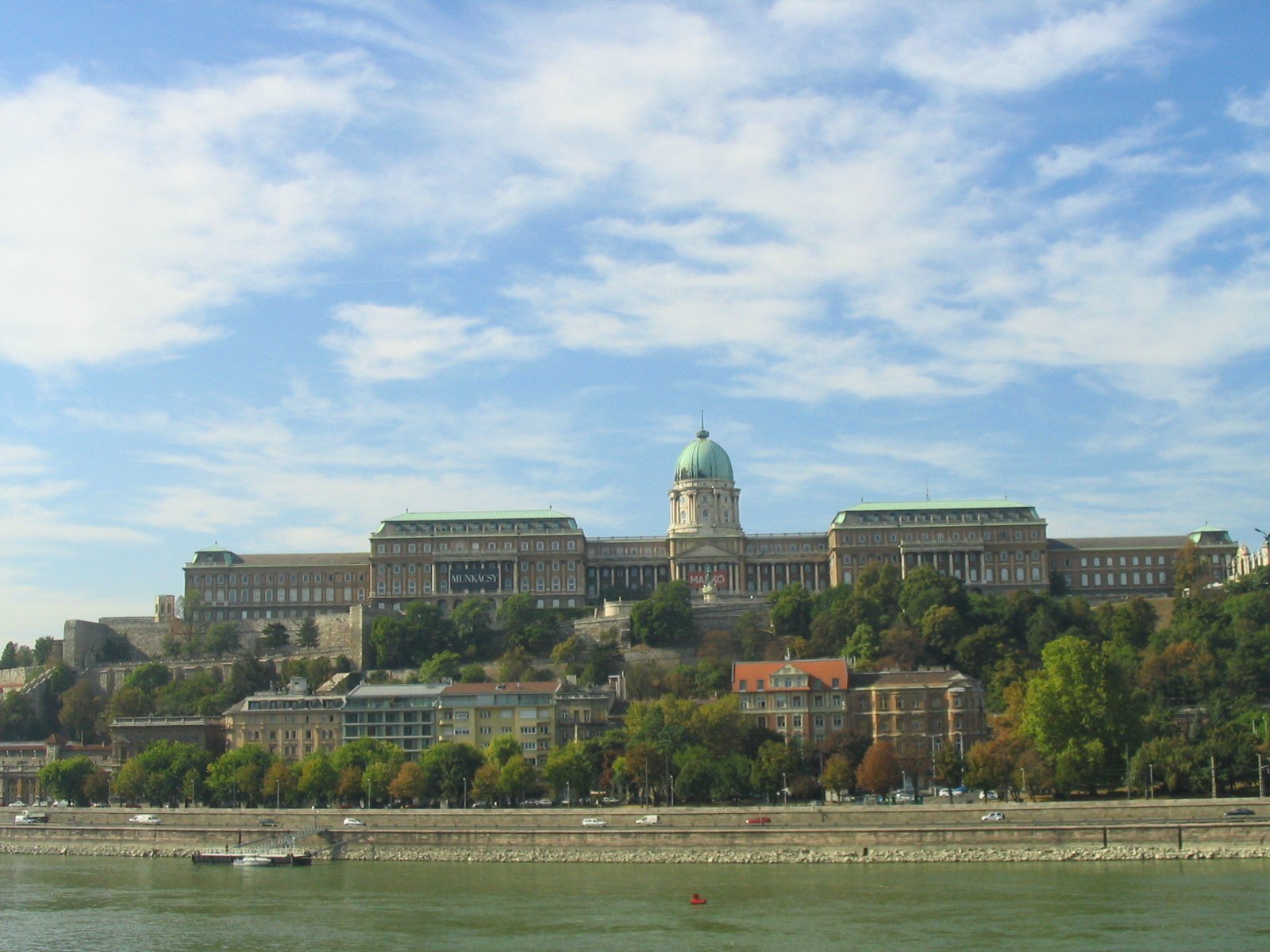 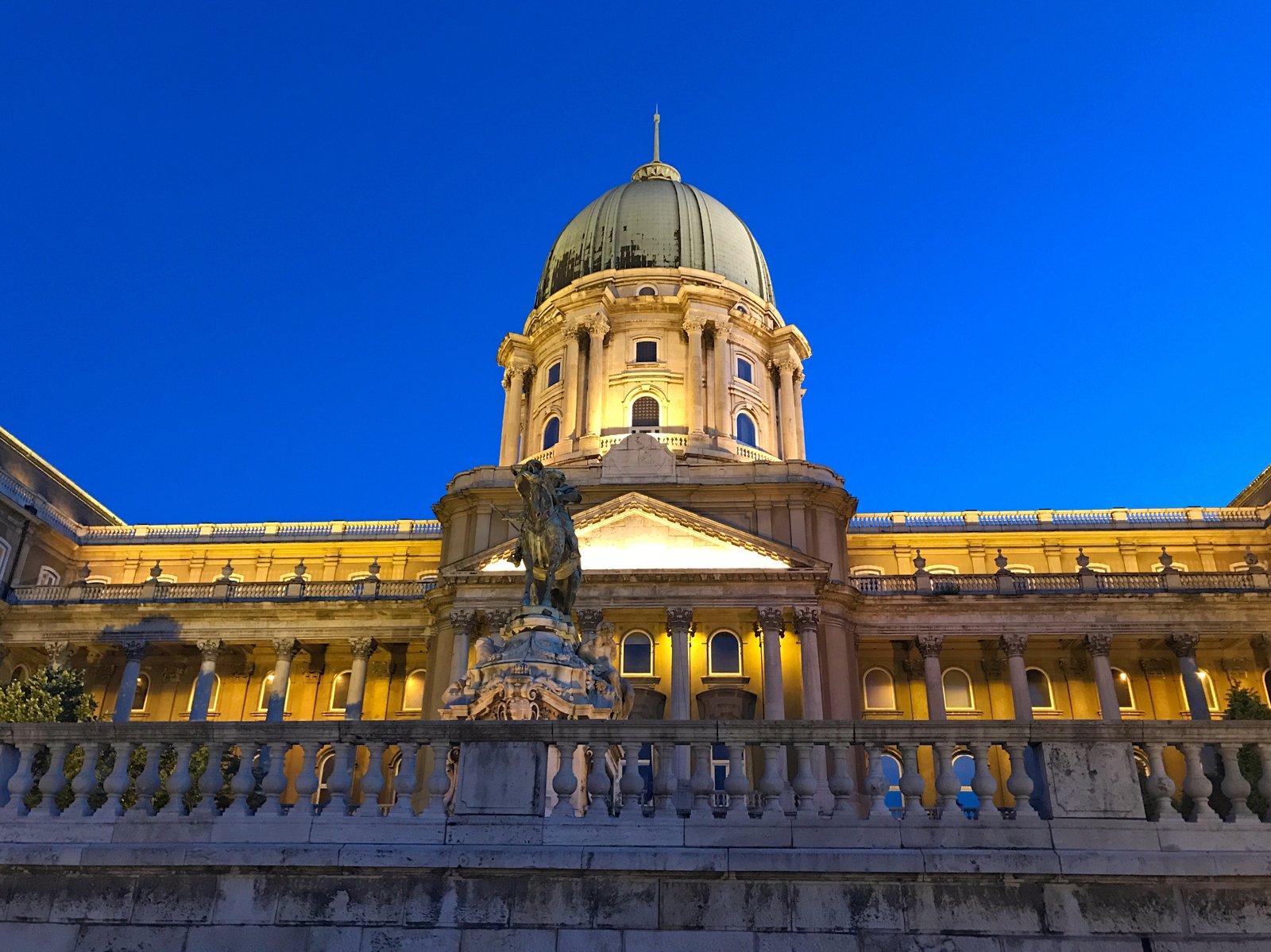 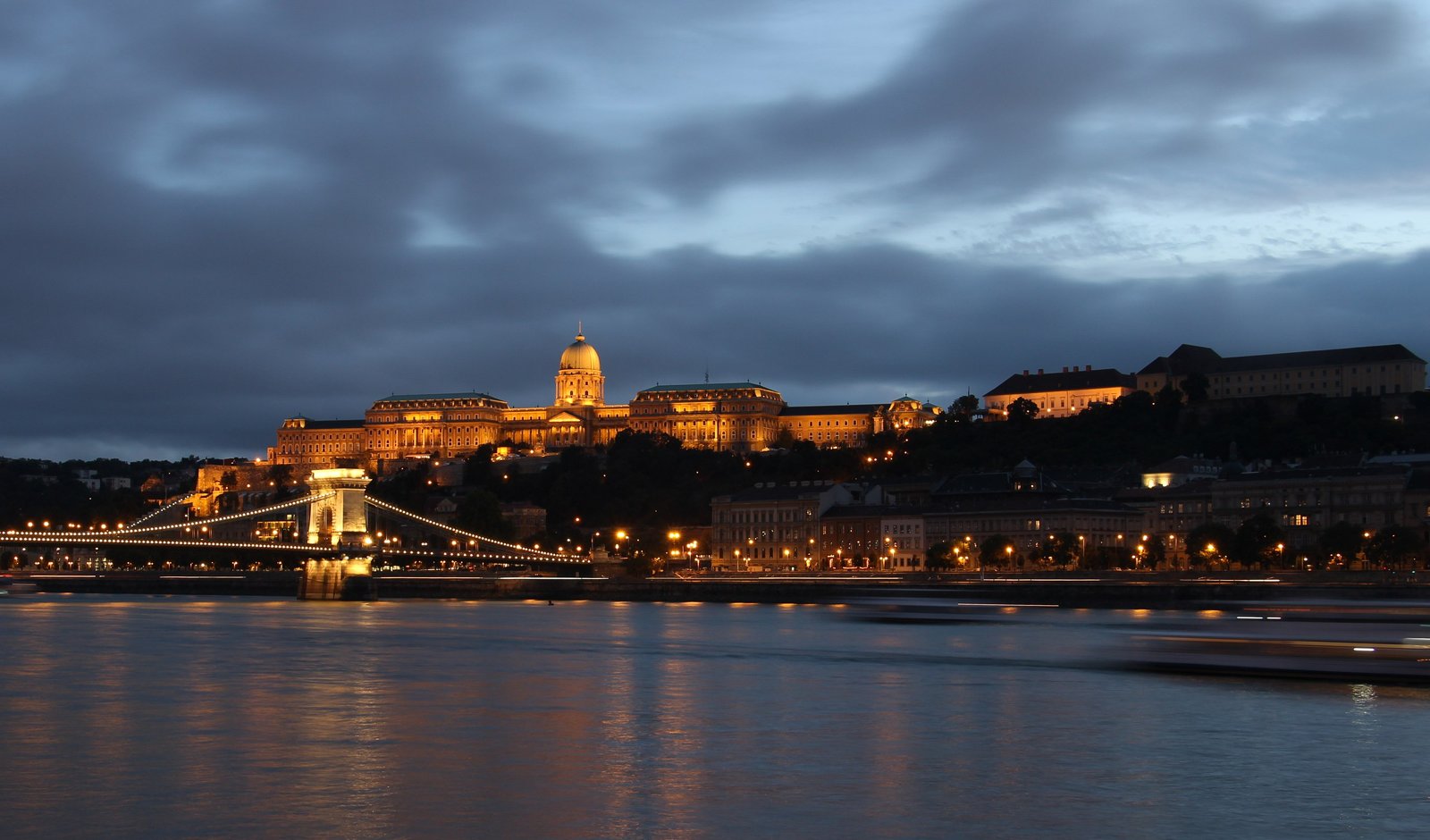 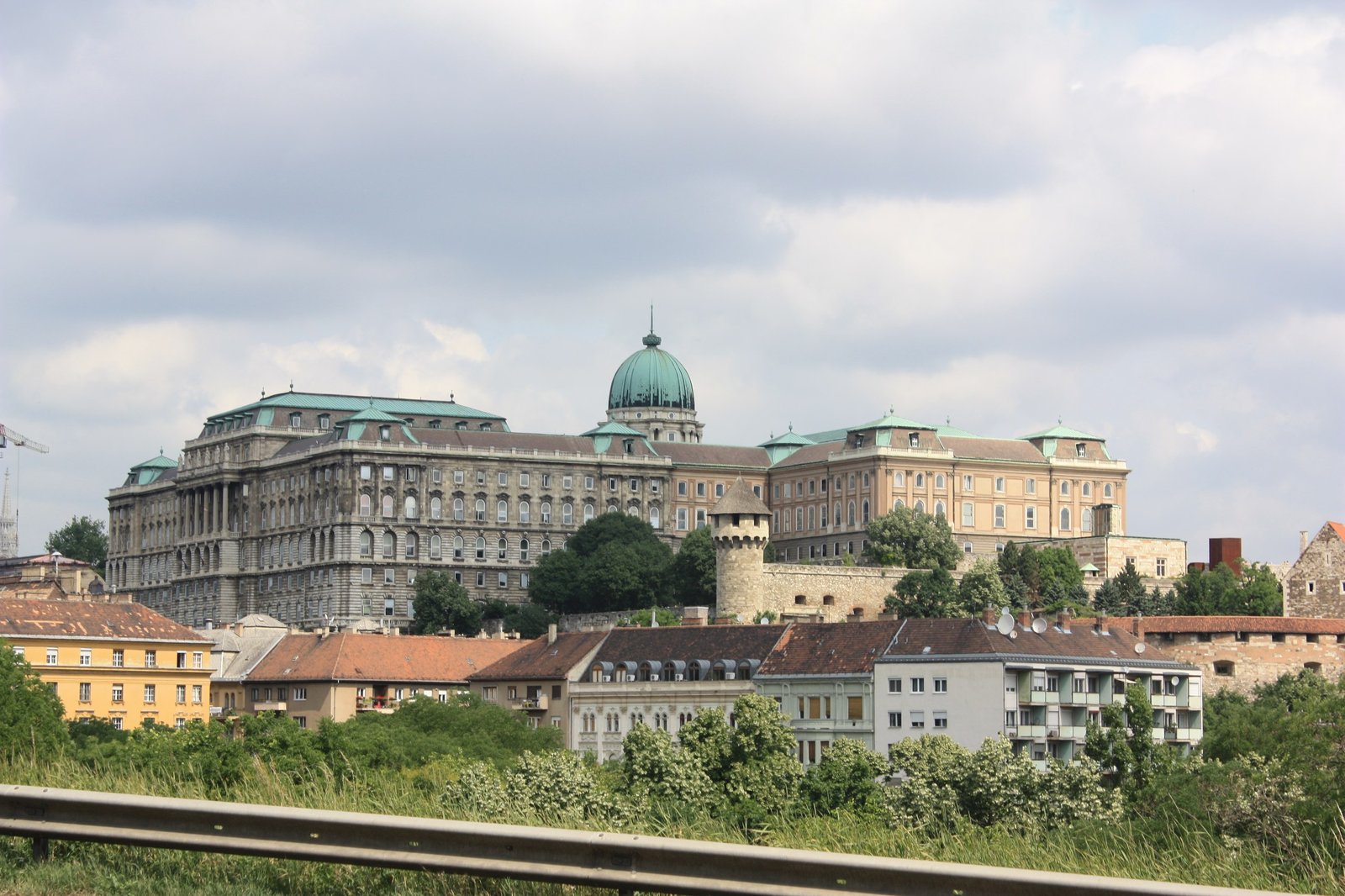 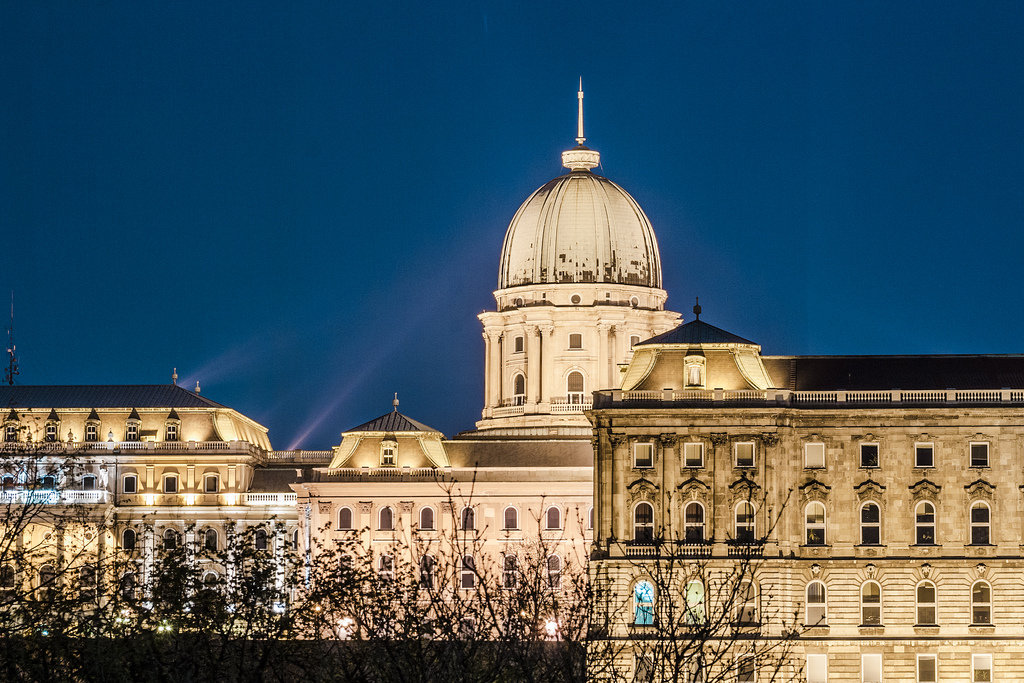 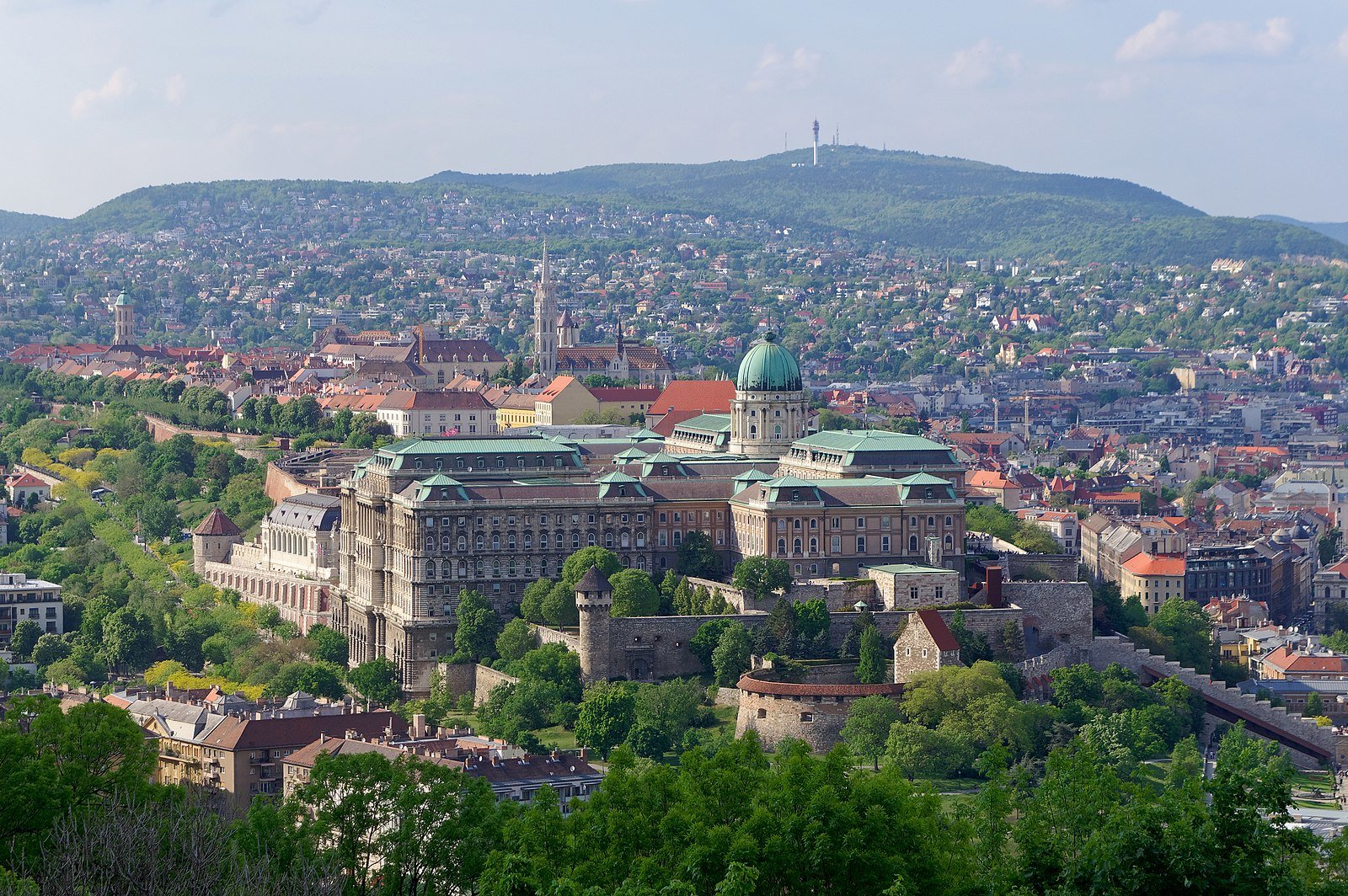 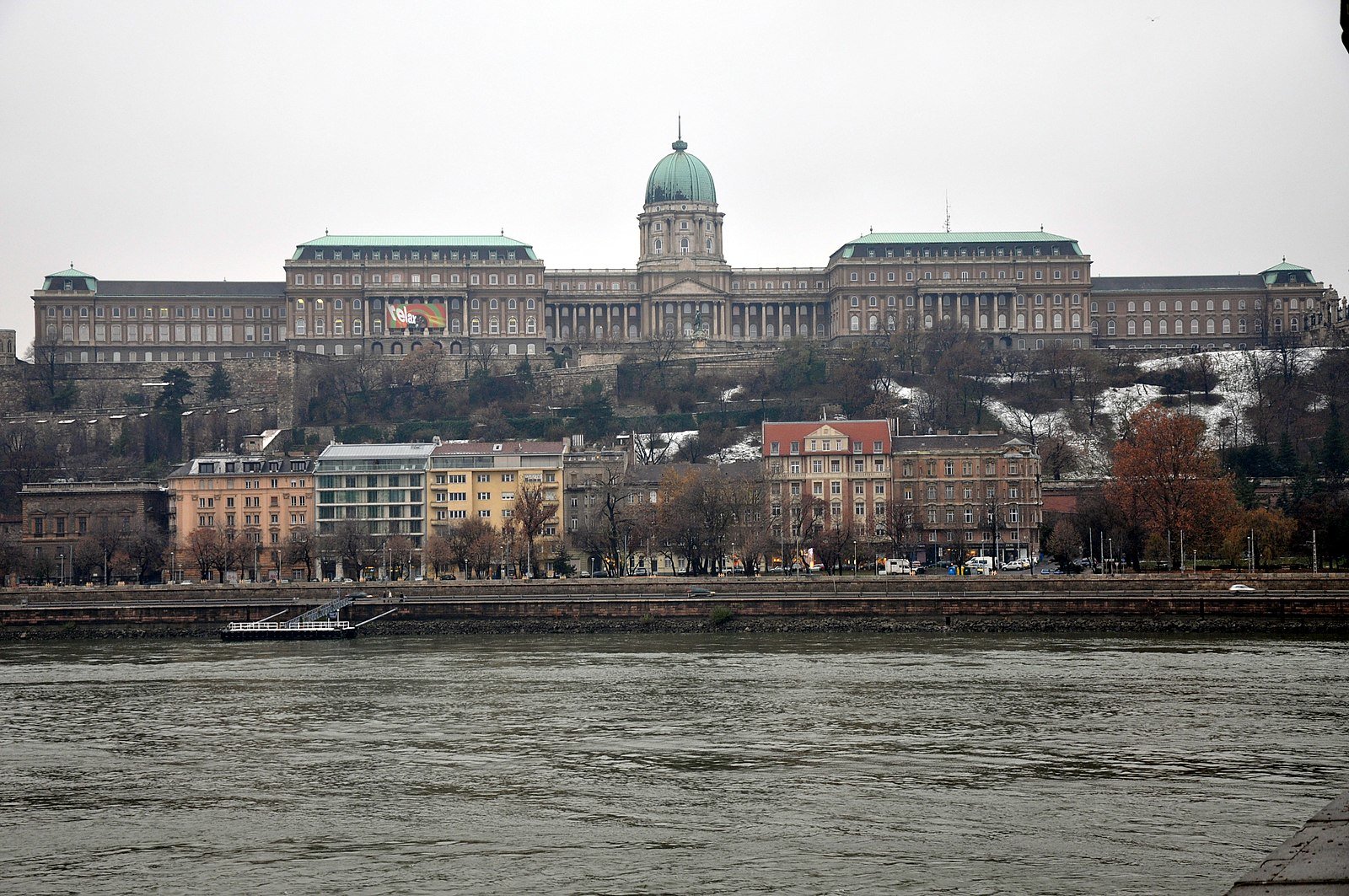 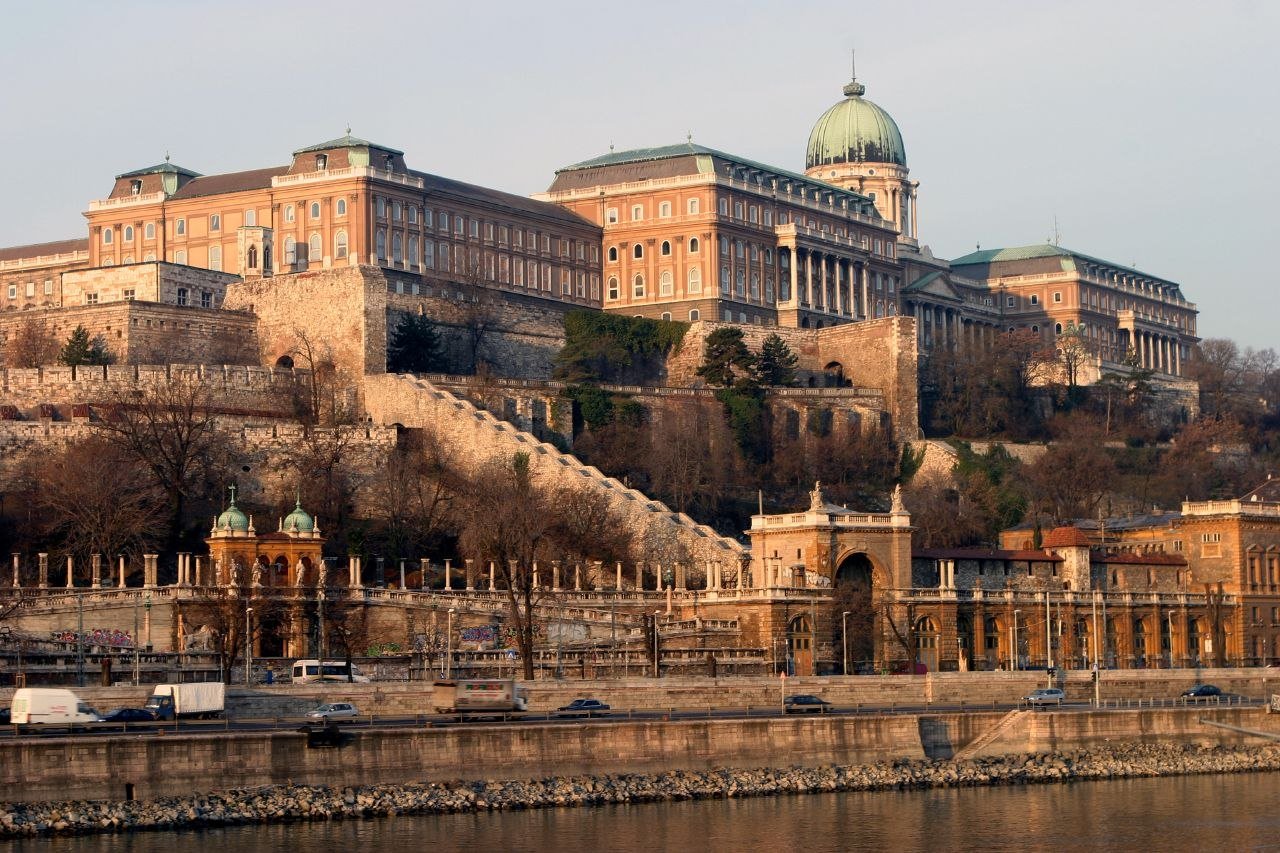 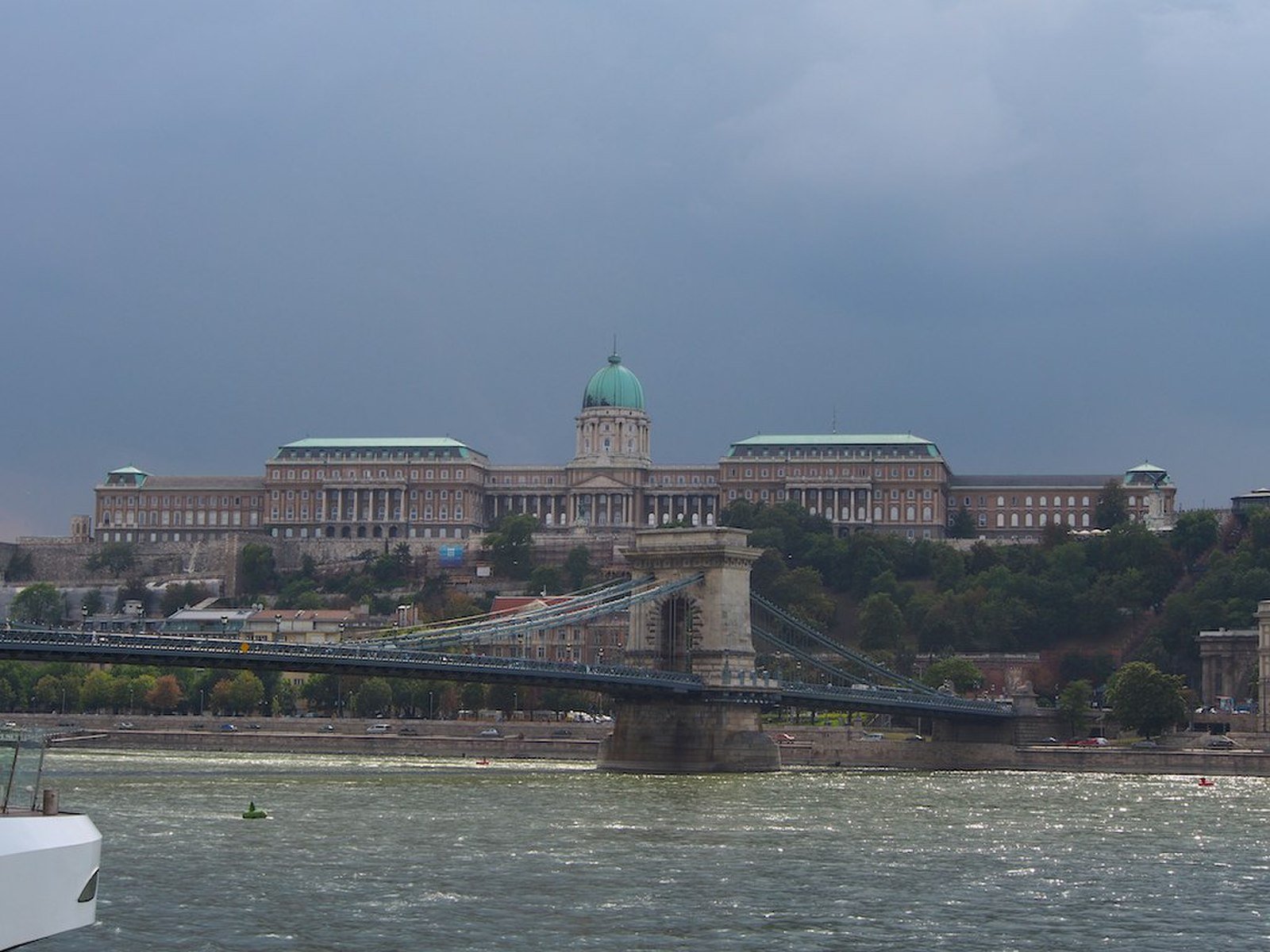