×
What are you looking for?
See all results
Churches in Braga 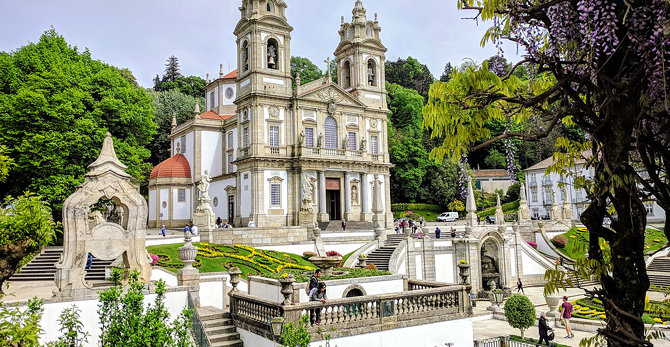 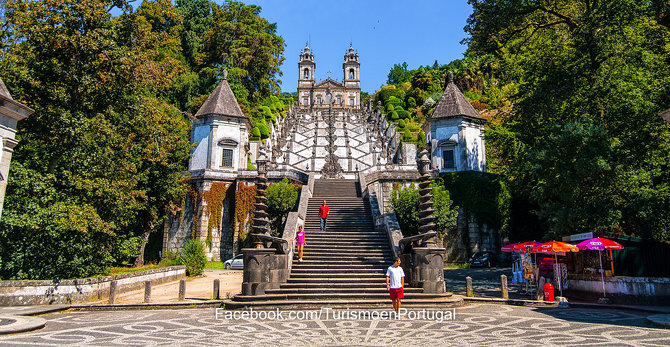 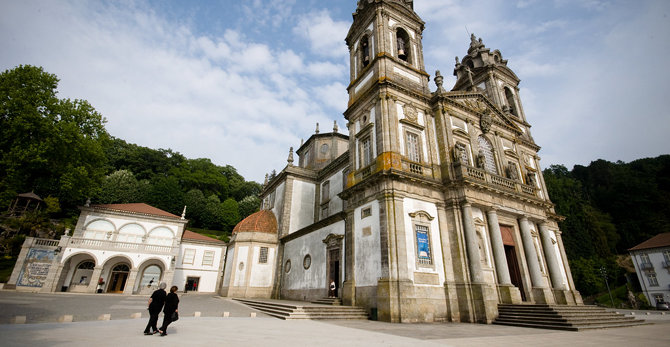 Bom Jesus do Monte is a Portuguese sanctuary in the surroundings of the city of Braga, in northern Portugal. Its name means Good Jesus of the mount.

The Sanctuary is a notable example of pilgrimage site with a monumental, Baroque stairway that climbs 116 metres (381 feet). It is an important tourist attraction of Braga.

Many hilltops in Portugal and other parts of Europe have been sites of religious devotion since antiquity, and it is possible that the Bom Jesus hill was one of these. However, the first indication of a chapel over the hill dates from 1373. This chapel - dedicated to the Holy Cross - was rebuilt in the 15th and 16th centuries. In 1629 a pilgrimage church was built dedicated to the Bom Jesus (Good Jesus), with six chapels dedicated to the Passion of Christ.

The present Sanctuary started being built in 1722, under the patronage of the Archbishop of Braga, Rodrigo de Moura Telles. His coat of arms is seen over the gateway, in the beginning of the stairway. Under his direction the first stairway row, with chapels dedicated to the Via Crucis, were completed. Each chapel is decorated with terra cotta sculptures depicting the Passion of Christ. He also sponsored the next segment of stairways, which has a zigzag shape and is dedicated to the Five Senses. Each sense (Sight, Smell, Hearing, Touch, Taste) is represented by a different fountain. At the end of this stairway, a Baroque church was built around 1725 by architect Manuel Pinto Vilalobos.

The works on the first chapels, stairways and church proceeded through the 18th century. In an area behind the church (the Terreiro dos Evangelistas), three octagonal chapels were built in the 1760s with statues depicting episodes that occur after the Crucifixion, like the meeting of Jesus with Mary Magdalene. The exterior design of the beautiful chapels is attributed to renowned Braga architect André Soares. Around these chapels there are four Baroque fountains with statues of the Evangelists, also dating from the 1760s.

Around 1781, archbishop Gaspar de Bragança decided to complete the ensemble by adding a third segment of stairways and a new church. The third stairway also follows a zigzag pattern and is dedicated to the Three Theological Virtues: Faith, Hope and Charity, each with its fountain. The old church was demolished and a new one was built following a Neoclassic design by architect Carlos Amarante. This new church, began in 1784, had its interior decorated in the beginning of the 19th century and was consecrated in 1834. The main altarpiece is dedicated to the Crucifixion.

In the 19th century, the area around the church and stairway was expropriated and turned into a park. In 1882, to facilitate the access to the Sanctuary, the Bom Jesus funicular was built linking the city of Braga to the hill. This was the first funicular to be built in the Iberian Peninsula and is still in use.

The design of the Sanctuary of Bom Jesus, with its Baroque nature emphasised by the zigzag form of its stairways, influenced many other sites in Portugal (like Lamego) and colonial Brazil, like the Sanctuary of Congonhas. As the pilgrims climbed the stairs, they encountered a theological programme that contrasted the senses of the material world with the virtues of the spirit, at the same time as they experienced the scenes of the Passion of Christ. The culmination of the effort was the temple of God, the church on the top of the hill. The presence of several fountains along the stairways give the idea of purification of the faithful.

The new church (built 1784–1834) by Carlos Amarante was one of the first Neoclassic churches of Portugal.

Santuário do Bom Jesus on Foursquare

The Bom Jesus funicular (Portuguese: Elevador do Bom Jesus) is a

The Sameiro Sanctuary is a Sanctuary located in Braga, in the

The Idol's Fountain (Portuguese: Fonte do Ídolo) is a Roman fountain

The Theatro Circo is a theater in Braga, Portugal.

The Raio Palace, in portuguese Palácio do Raio, is a palace in Braga, 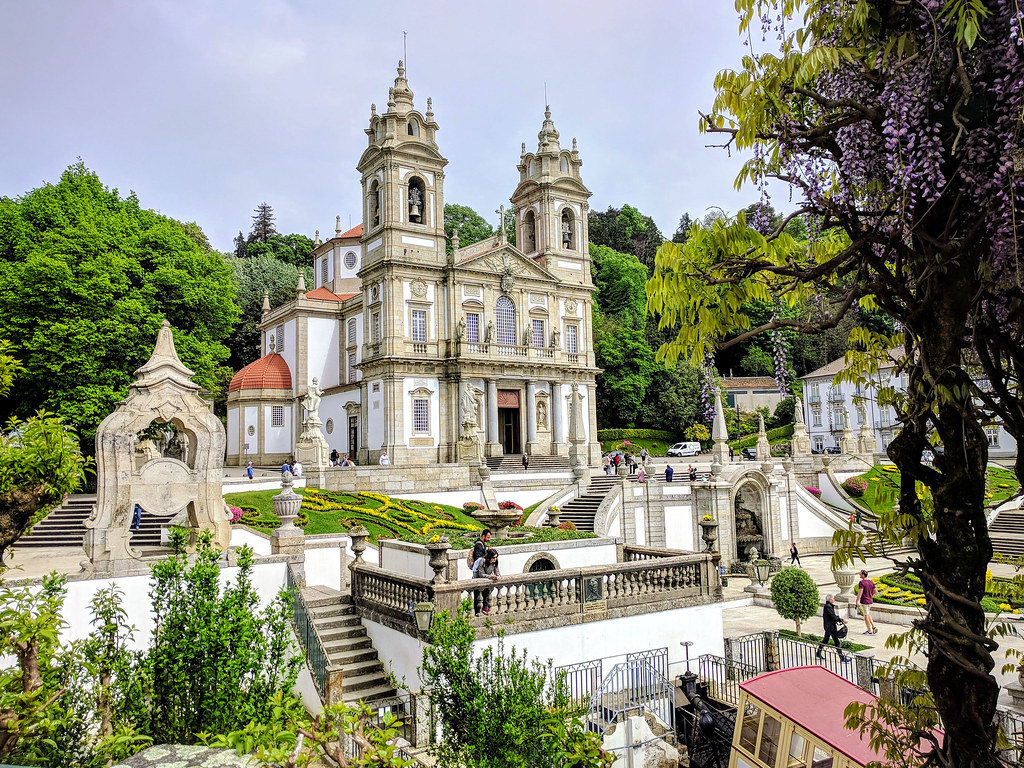 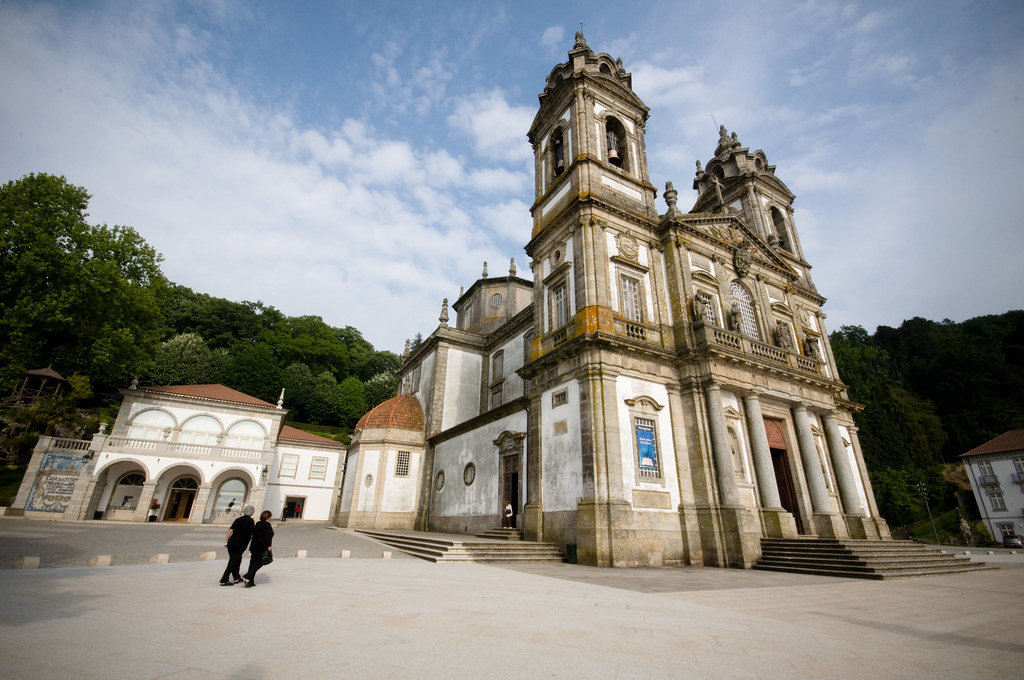 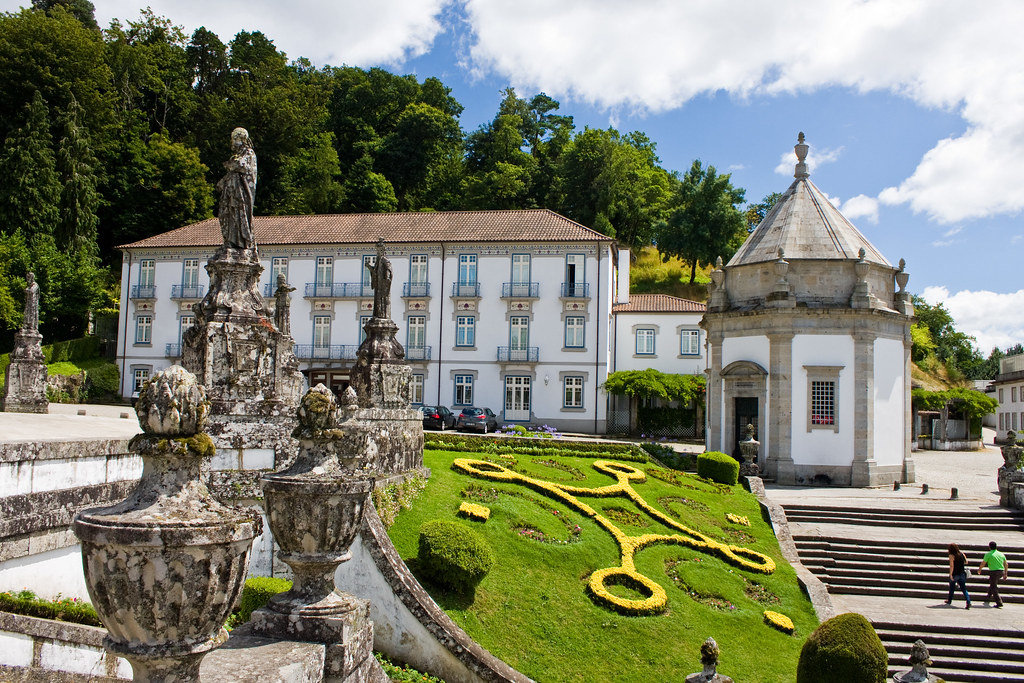 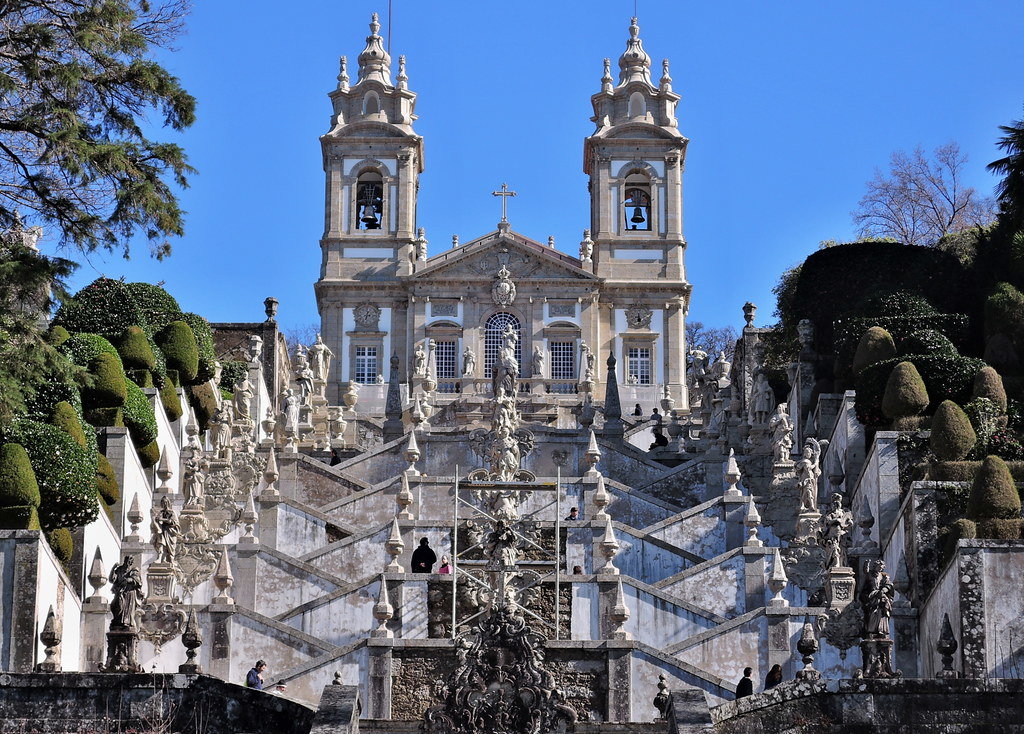 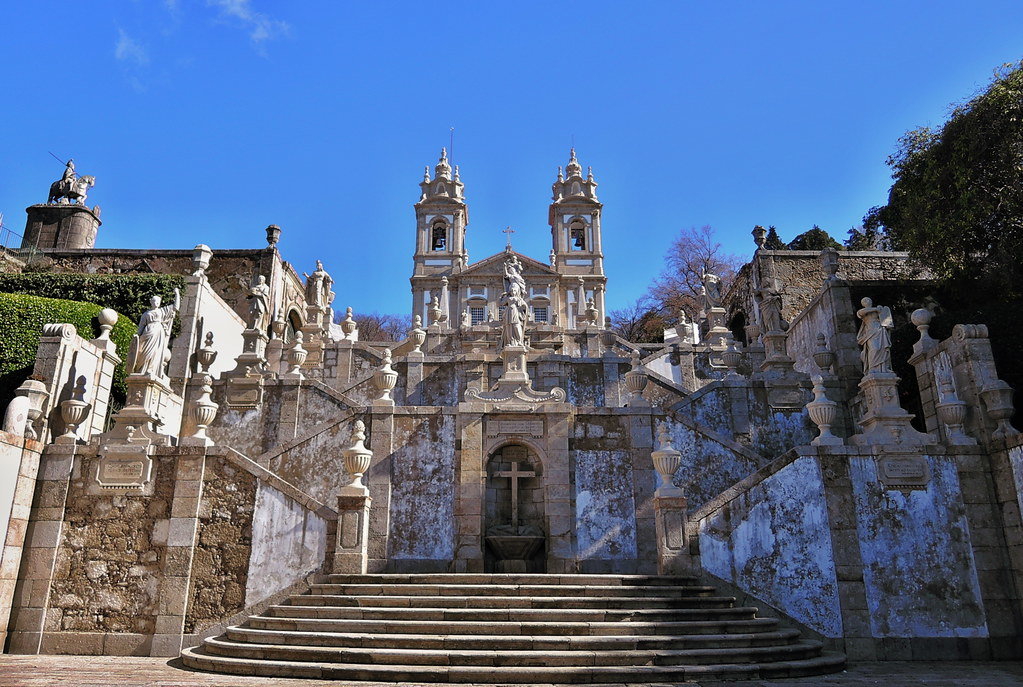 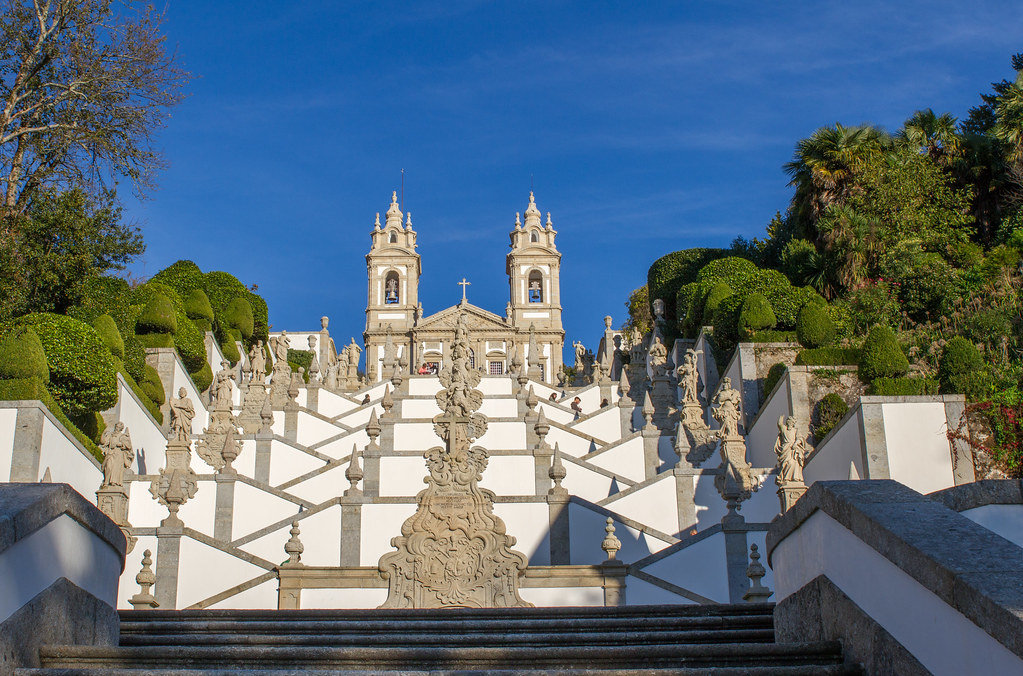 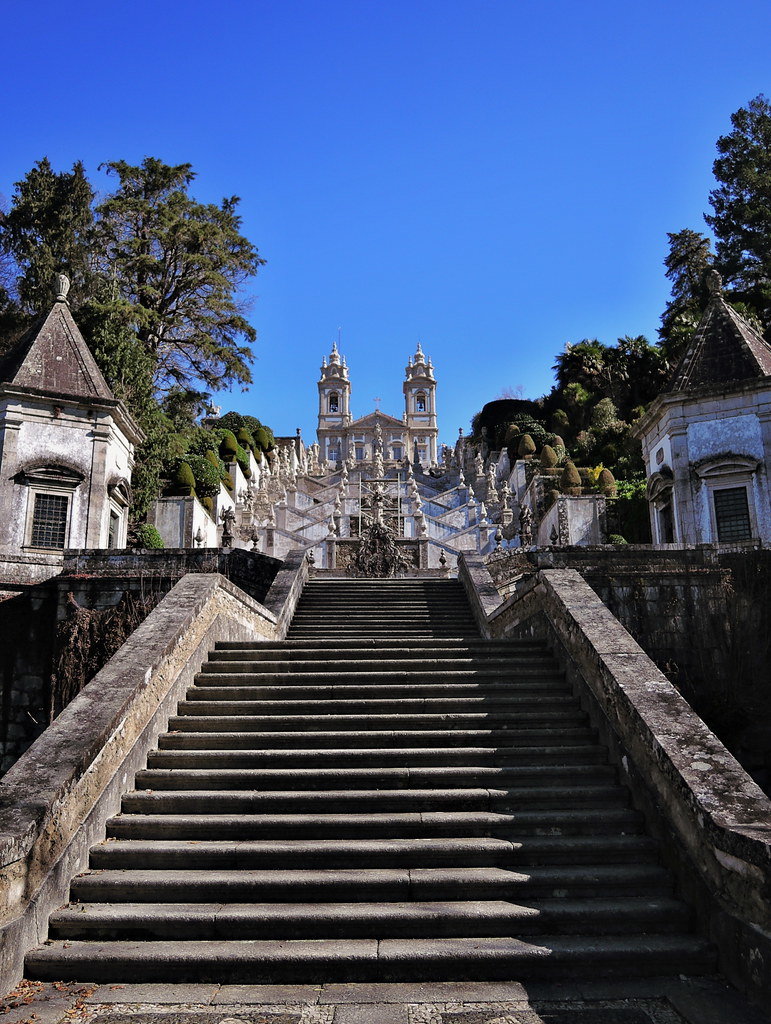 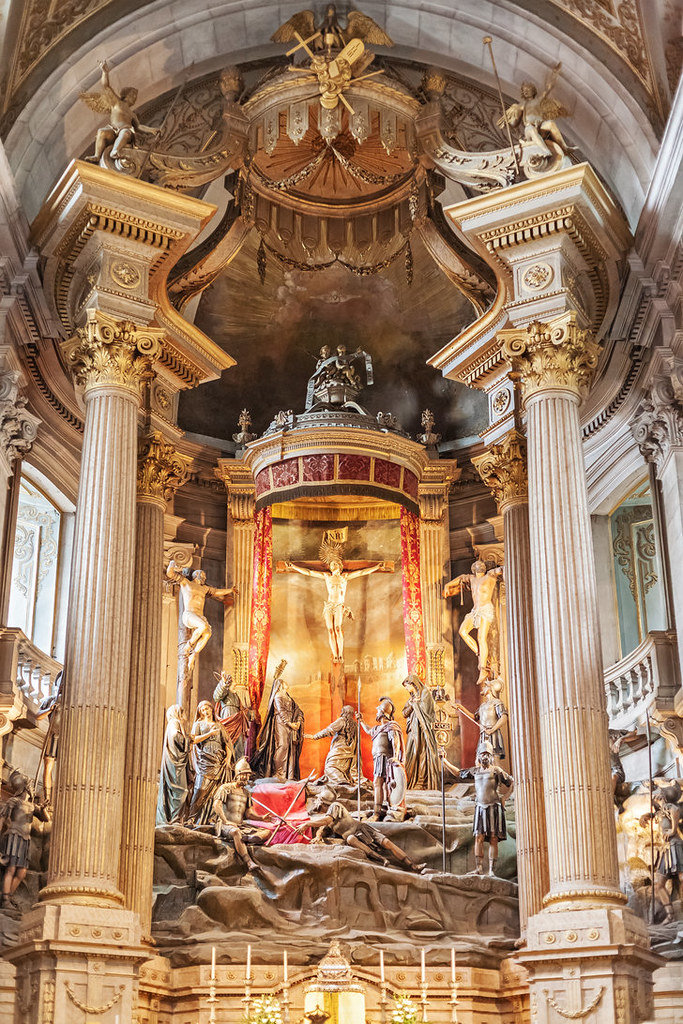 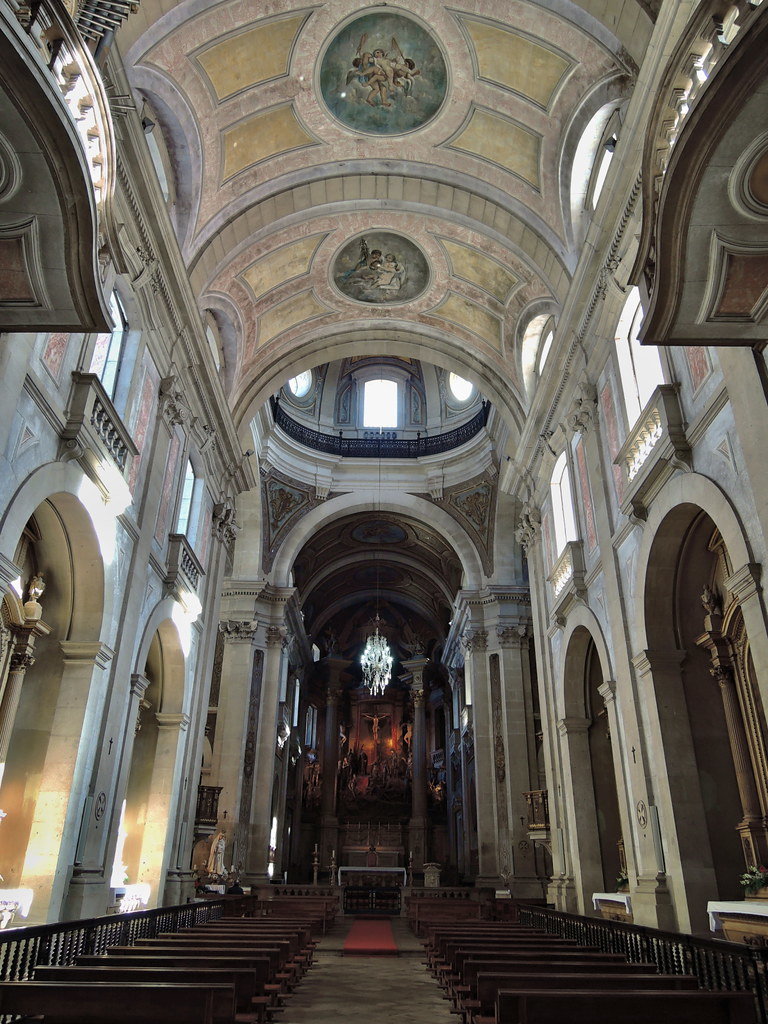 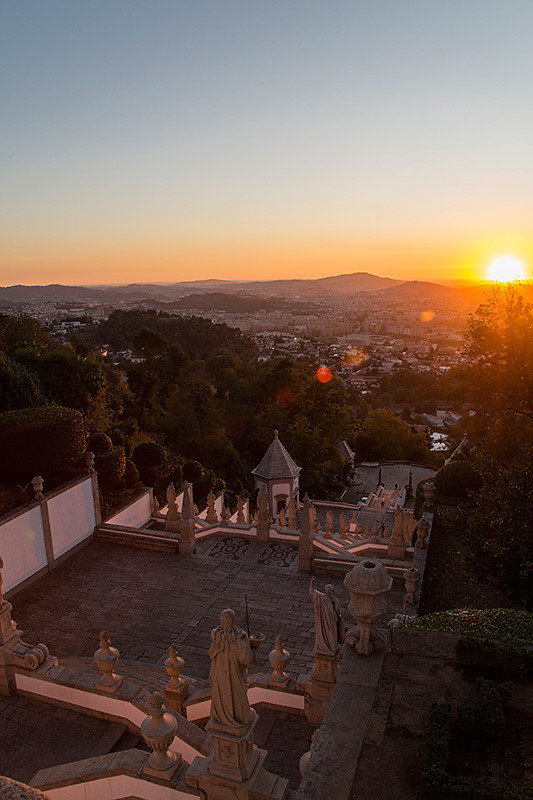 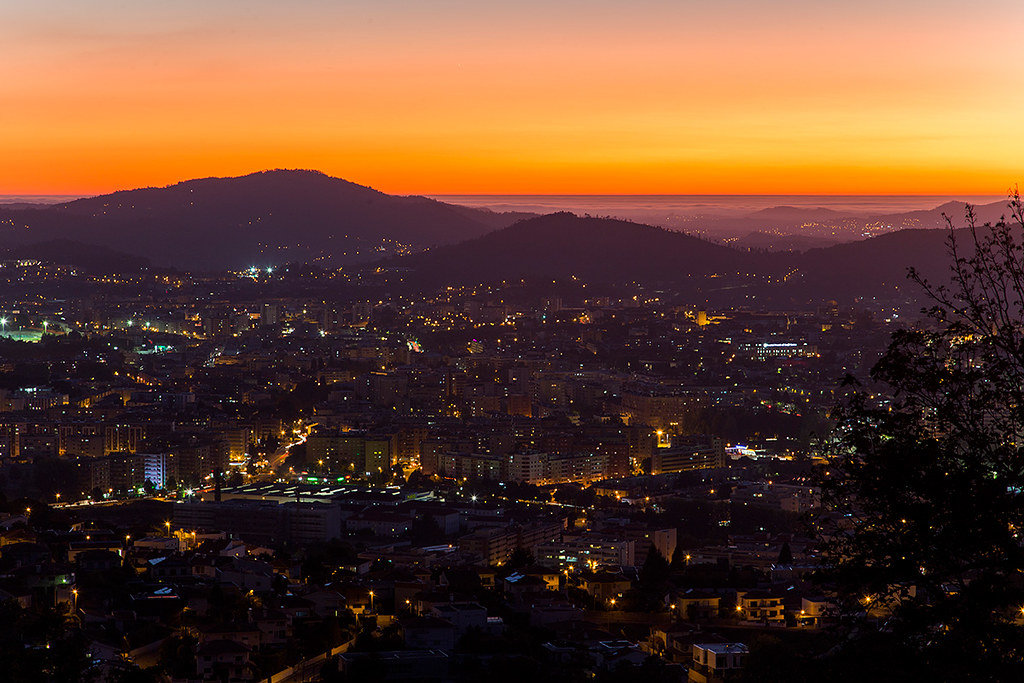 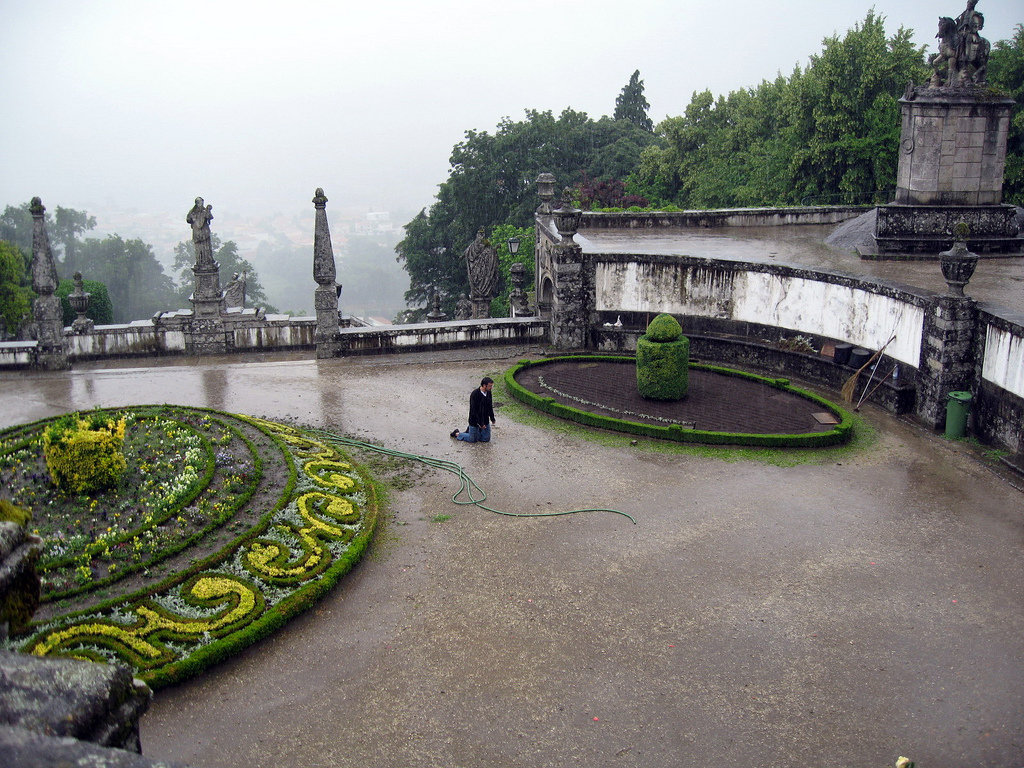 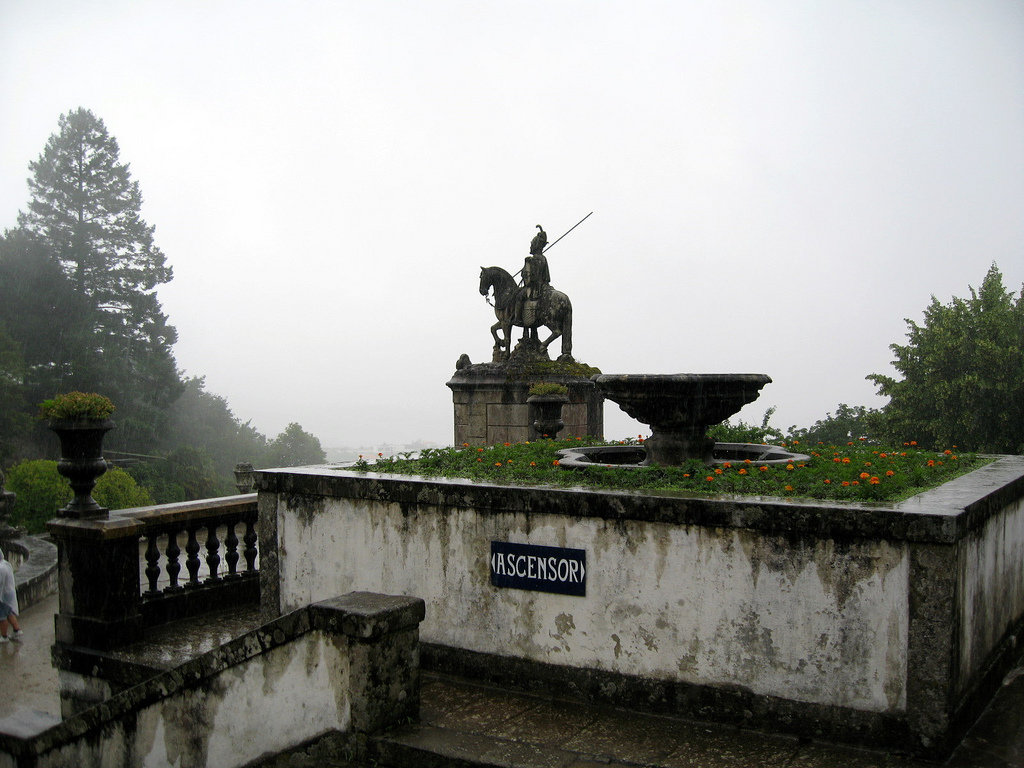 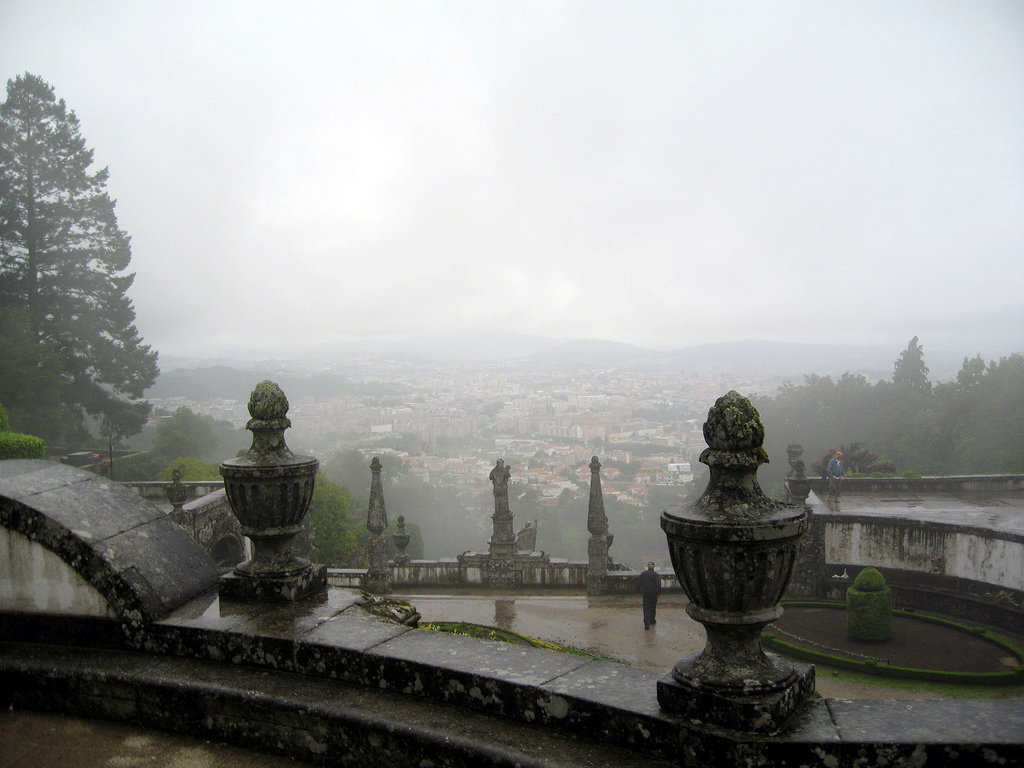 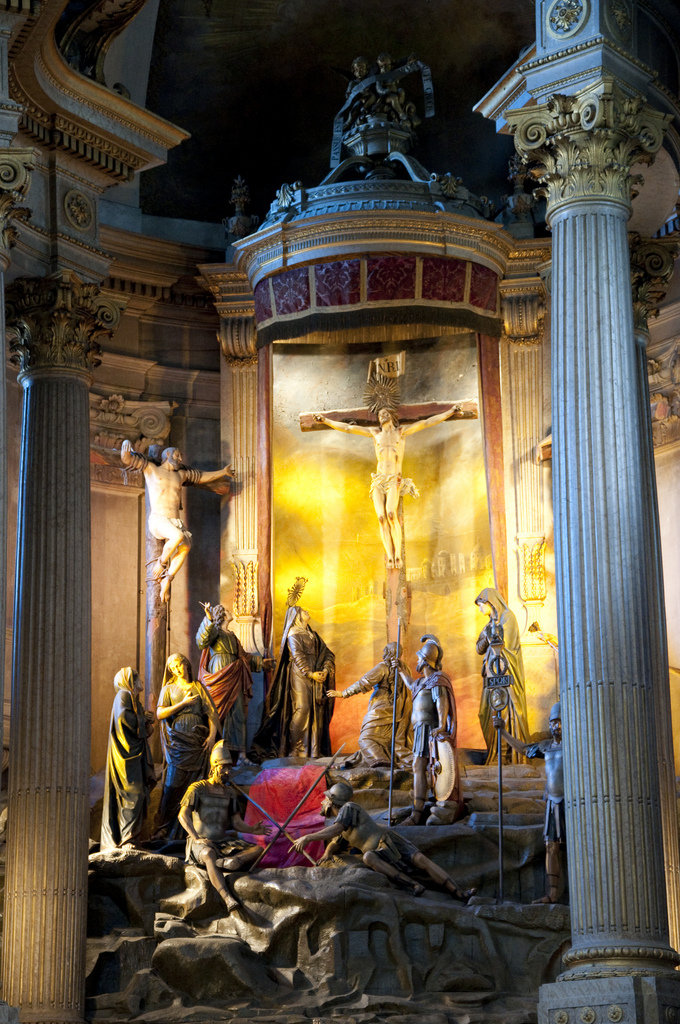 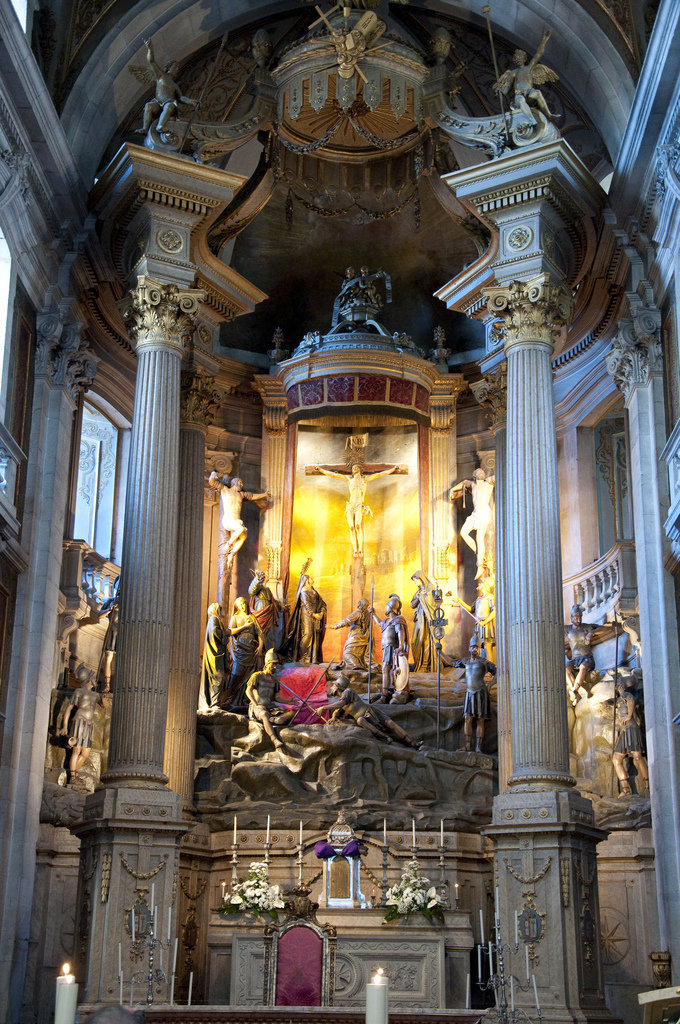 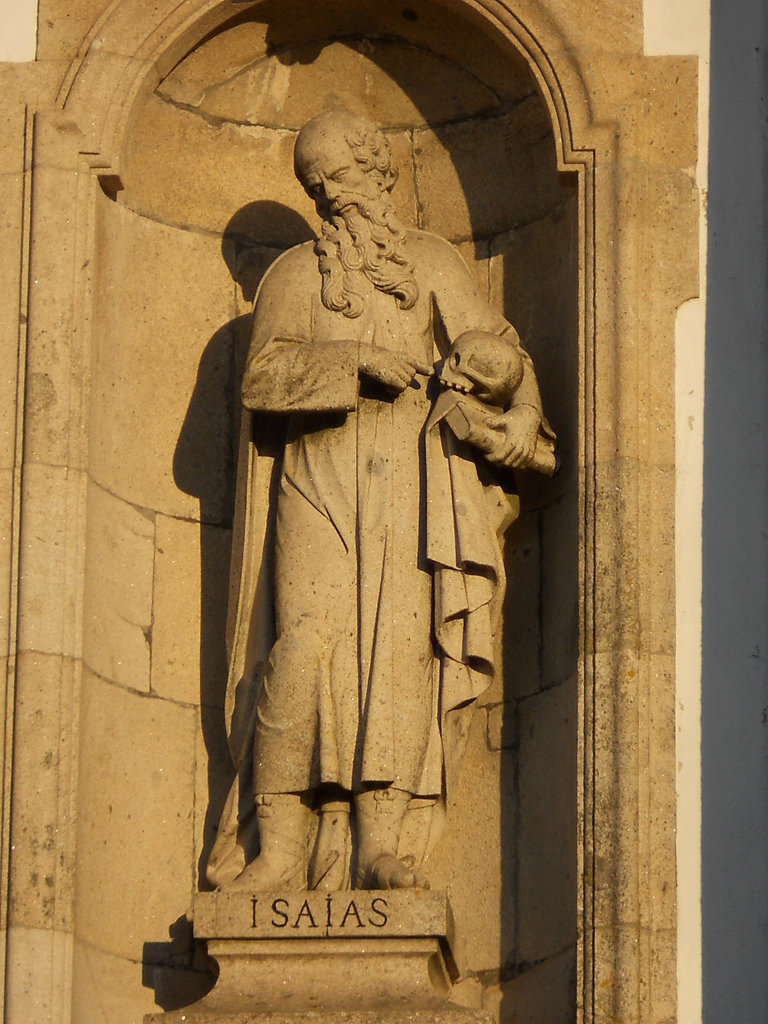 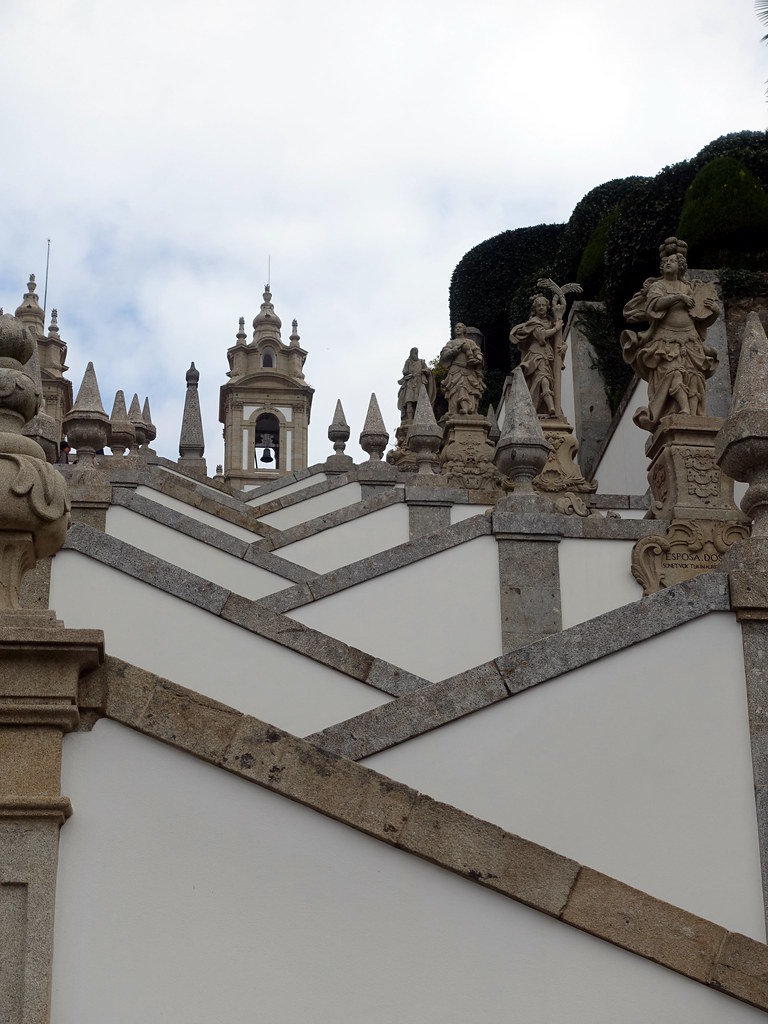 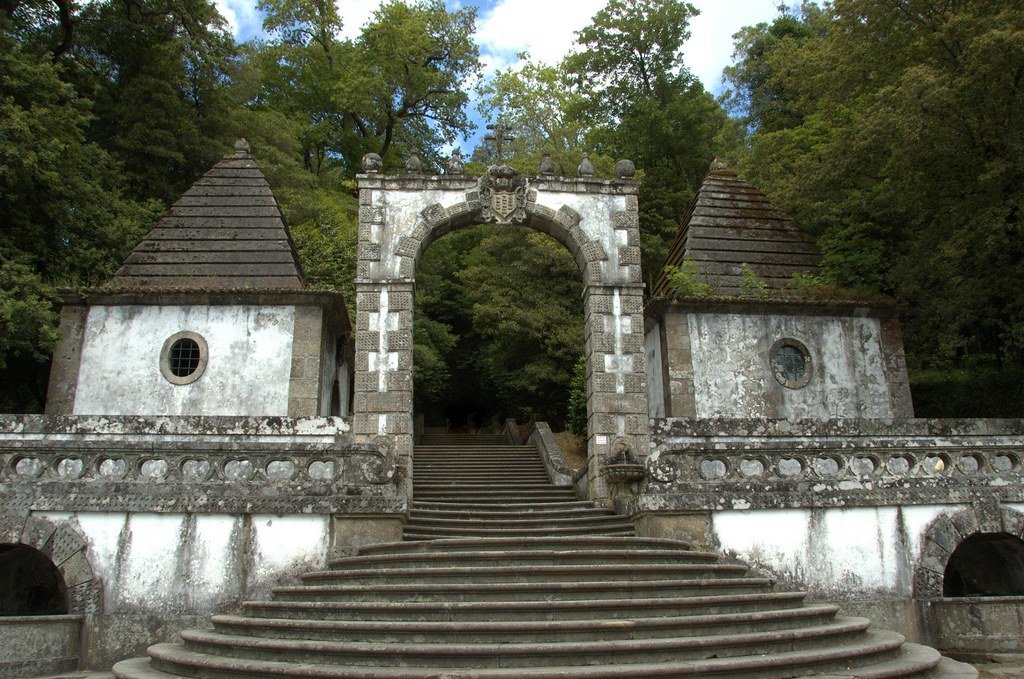