The Basilica di San Nicola (Basilica of Saint Nicholas) is a church in Bari, southern Italy, that holds wide religious significance throughout Europe and the Christian world. The basilica is an important pilgrimage destination both for Roman Catholics and Orthodox Christians from Eastern Europe.

The basilica was built between 1087 and 1197, during the Italo-Norman domination of Apulia, the area previously occupied by the Byzantine Catapan of which Bari was the seat. Its foundation is related to the stealing of the relics of St. Nicholas from the saint’s original shrine in Myra, in what is now Turkey. When Myra passed into the hands of the Saracens aka Muslims, some saw it as an opportunity to move the saint's relics to a more hospitable location. According to the justifying legend, the saint, passing by the city on his way to Rome, had chosen Bari as his burial place. There was great competition for the relics between Venice and Bari. The last-named won, the relics were carried off under the noses of the lawful Greek custodians and their Mohammedan masters, and on May 9, 1087, were safely landed at Bari. A new church was built to shelter Nicholas' remains and Pope Urban II was present at the consecration of the crypt in 1089. The edifice was officially consecrated in 1197, in the presence of the Imperial Vicar, Bishop Conrad of Hildesheim, and of numerous bishops, prelates and noblemen. Elias, abbot of the nearby monastery of St. Benedict, was named as first archbishop. His cathedra (bishop's throne) still stands in the church to this day.

The church has a rather square appearance, seemingly more suited to a castle than to a church. This impression is strengthened by the presence of two low massive towers framing the façade. It was indeed used several times as castle during its history.

The interior has a nave and two aisles, divided by granite columns and pilasters. The presbytery is separated from the rest of the edifice by mean of three arches supported by columns of Byzantine influence. Above the aisles is the matronaeum, a tribune gallery for women, opening into the nave. The basilica was the first church of this design, setting a precedent which was later imitated in numerous other constructions in the region.

The Basilica houses one of the most noteworthy Romanesque sculptural works of southern Italy, a cathedra (bishop's throne) finished in the late eleventh century for Elias. There are precious mosaic pavements in the crypt and presbytery. The ciborium, the most ancient in the region, is also decorated with mosaic; it has four columns with foliage, animals and mythological figures. The crypt, with 26 columns sporting capitals in Byzantine and Romanesque style, houses the relics of St. Nicholas.

In the church is the Renaissance tomb of Bona Sforza, (sixteenth century), in marble. The museum of the Basilica has precious works of art, including a collection of twelfth-century candlesticks donated by King Charles I of Anjou.

The church was restored in the late thirteenth century, in 1456 and in the seventeenth century. In the twentieth-century restoration, most of the Baroque additions were removed, leaving only the giled wooden ceiling, enframing canvases by Carlo De Rosa.

December 6 is Saint Nicholas Day, the main feast day of Saint Nicholas. On this day, it is traditional for the clergy of the basilica to lower a flask into the suberranean tomb of Saint Nicholas to extract some of the myrrh which is believed to exude from the relics. Containers of this myrrh are sent all over the world, and believers have reported numerous miracles as a result of being anointed with it. For those Orthodox Churches which follow the traditional Julian Calendar, December 6 falls on December 19 of the Gregorian Calendar, so there will actually be two celebrations of the same holy day: one according to the New Calendar (December 6) and one according to the Old Calendar (December 19). Both are celebrated with great solemnity at Bari.

May 9 (May 22) is celebrated annually in the Russian Orthodox Church as the feast day of the "Translation of the Relics of Saint Nicholas from Myra to Bari".

Pilgrimages to the basilica from Eastern Europe have increased dramatically since the fall of the Iron Curtain, not only for the feast days, but throughout the year.

Stacey Hollander
Place of power in Bari. Make sure you go down to the crypt to pay respect to St Nicolas. Russian Orthodox services take place on Tuesdays and Thursdays at 10:30 am.

The Telegraph
A final, unexpected twist. Here lie the mortal remains of Saint Nicholas, stolen from Turkey in the 11th century by Barese merchantmen. It’s no Florence, but it’s got Father Christmas.

Viaggiareinpuglia.it
The building has a basilica-style structure with three naves and a continual transcept ending in three apses of simple Benedictine design...

The Castellana Caves (Italian: Grotte di Castellana) are a remarkable

Alberobello is a small town and comune in the province of Bari, in

The Roman catholic Basilica of Saint Servatius is situated in 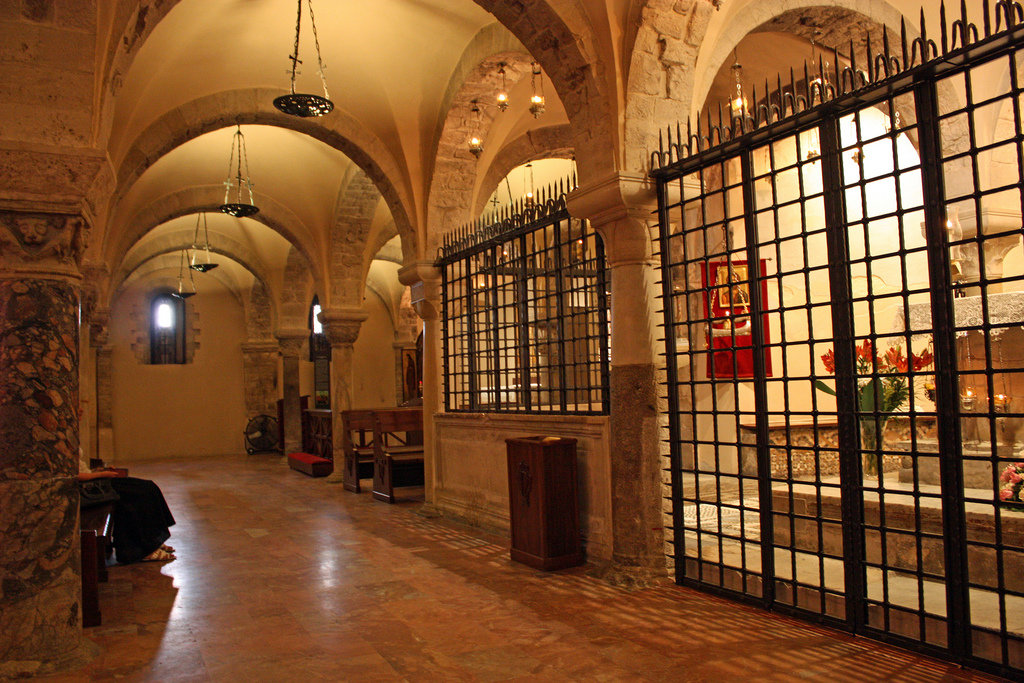