×
What are you looking for?
See all results
Roman Catholic churches in San Marino 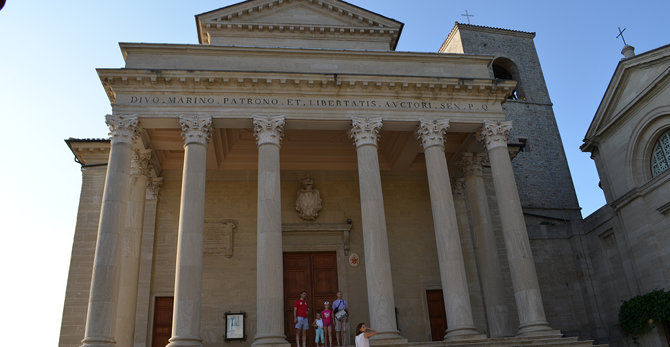 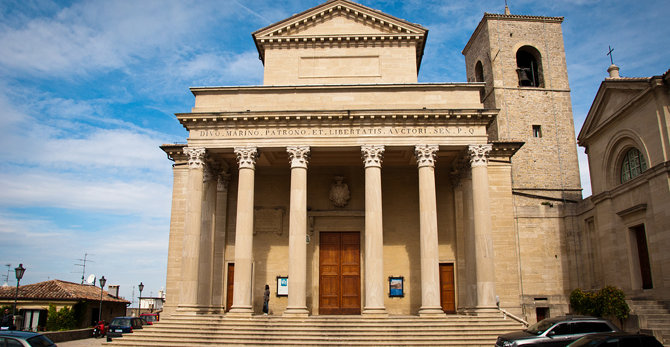 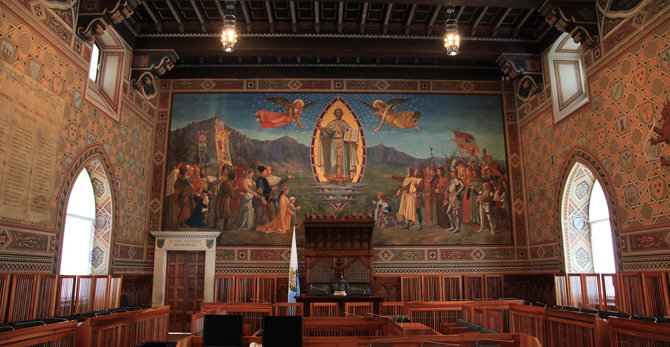 The Basilica di San Marino (Marino translates from Latin to "man of the sea") is a Catholic church located in the Republic of San Marino. While the country has a distinct domination of historic religious buildings of Christian faith, the basilica is the main church of the City of San Marino. It is situated on the Piazza Domus Plebis in the northeastern edge of the city, adjacent to the Church of St. Peter. It is dedicated to San Marino diacono, the founder and patron of the Republic.

The present church was built in 1836 in place of an earlier one that dated to 7th century. It is built in the Neoclassical style, with a porch of eight Corinthian columns. Relics of St. Marino are enshrined in the basilica.

An earlier church was erected on the spot in the 4th century which was dedicated to the same patron. The first document attesting the existence of the church dates to 530 in the La Vita di San Severino by Eugippius. A later document, the Placito Feretrano, dates from 885. The first document that directly relates to the "Pieve di San Marino" is dated 31 July 1113, with donations from the faithful public.

At the beginning of the 1800s, the church was in critical condition. In 1807, it was razed and a project for the construction of the new church was handed to the Bolognese Achille Serra. On 24 July 1825, the council decided to build a new church in the place where the old church had stood. Construction began on 28 July 1826 and was completed in 1838. On 5 February 1838, the church was solemnly inaugurated in the presence of the Bishop of Montefeltro, Crispino Agostinucci and the Captain's-Regent. On 21 July 1926, it was elevated to the rank of Basilica by Pius XI. The construction cost was 40,150 scudi and 76 baiocchi.

On 29 August 1982, the basilica was visited by John Paul II who blessed the church and the relics related to the deacon of San Marino. The Basilica of San Marino is depicted on the ten cent editions of the Sammarinese euro coins.

Over the course of centuries, the basilica has witnessed civil turmoil. Because of this, in 1992, the Vatican made several decrees. These included that the basilica, as the mother-church of all churches within the Republic, is made exempt from the jurisdiction of the parish of the city of San Marino. The basilica is entrusted to the care of a priest who holds the title of Rector, and the Rector is appointed and removed in accordance with canon law.

The interior of the basilica consists of three naves, supported by sixteen Corinthian columns which form a large ambulatory around the semicircular apse. The front porch of 8 columns, six at the front and two either side, has a Latin inscription written above it which reads "DIVO. MARINO. PATRONO. ET. LIBERTATIS. AVCTORI. SEN. P. Q.". The altar is adorned by a statue of St. Marino by Adamo Tadolini, a student of Antonio Canova. Under the altar are relics of St. Marino which were found on 3 March 1586; some relics were donated to the island of Rab (Croatia), the birthplace of the saint, on 28 January 1595. A reliquary bust in silver and gold dated to 2 September 1602 lies to the right of altar. In the right aisle is a small altar dedicated to Mary Magdelene and a painting by Elisabetta Sirani, Noli Me Tangere.

The Chiesa di San Pietro is located at the Basilica of San Marino, to the side of the front steps. It was originally built in 600. It houses a valuable altar with inlaid marble, donated by the musician Antonio Tedeschi in 1689, which is surmounted by a statue dedicated to St. Peter by Enrico Saroldi. In the crypt of this church there are two niches cut into rock that are said to be the beds of San Marino and San Leo. Inside is a monument to Pope John XXIII, erected by the Government of the Republic.

Several liturgical celebrations are stipulated for the basilica. Amongst these are included: the election and the establishment of the Captains Regent; the anniversary celebration of the Republic's Militia (25 March); national and religious holidays of San Marino, the Founder and Patron of the Republic (3 September), and St. Agatha, patroness of the Republic (5 February); and the religious festival honoring the St. of the Body and Blood of Christ.

The basilica can also function as a venue for popular events such as the XII Autumn Music Festival production in 2010 of Mozart's Requiem Mass.

The Palazzo Pubblico (Italian: Public Palace) is the town hall of the

Monte Titano is the highest peak in San Marino, in the Apennines. It

Castel Sismondo is a castle in Rimini, Romagna, northern Italy. 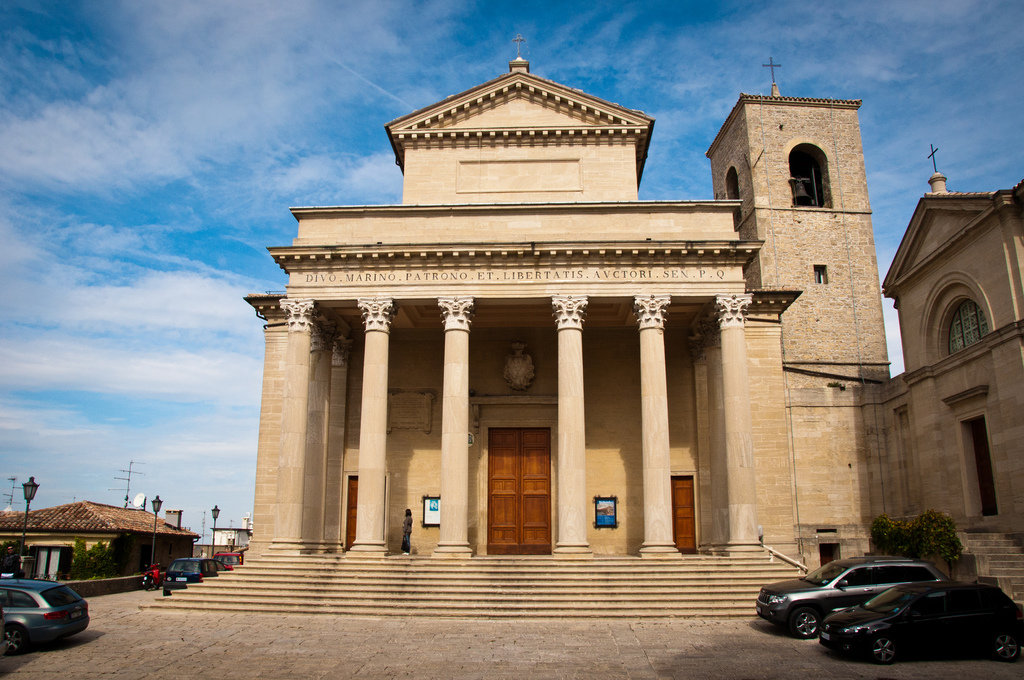 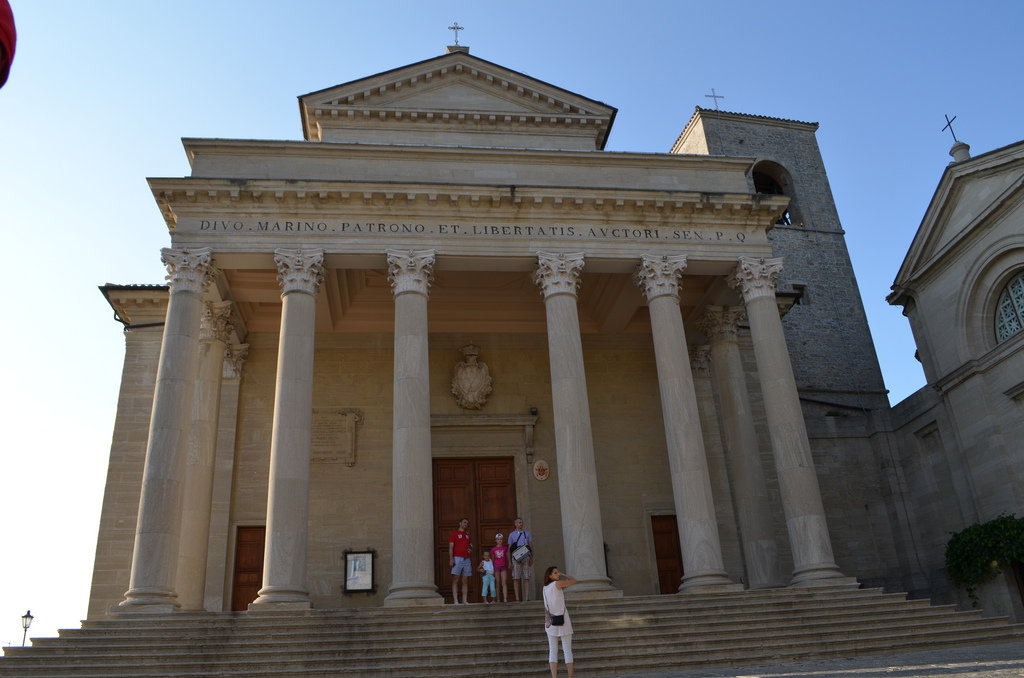 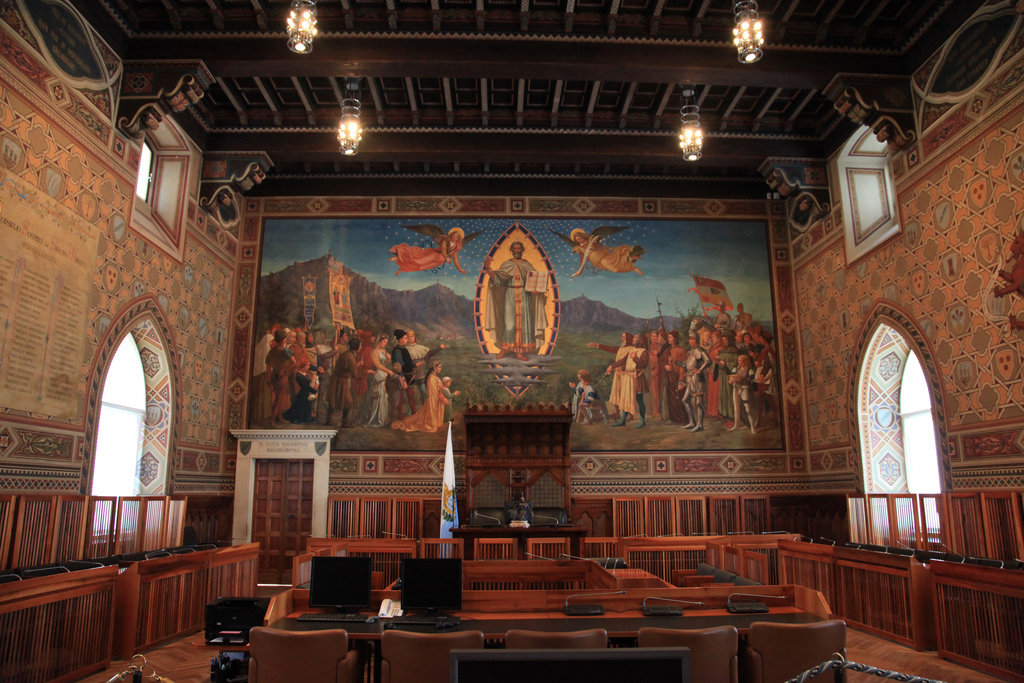 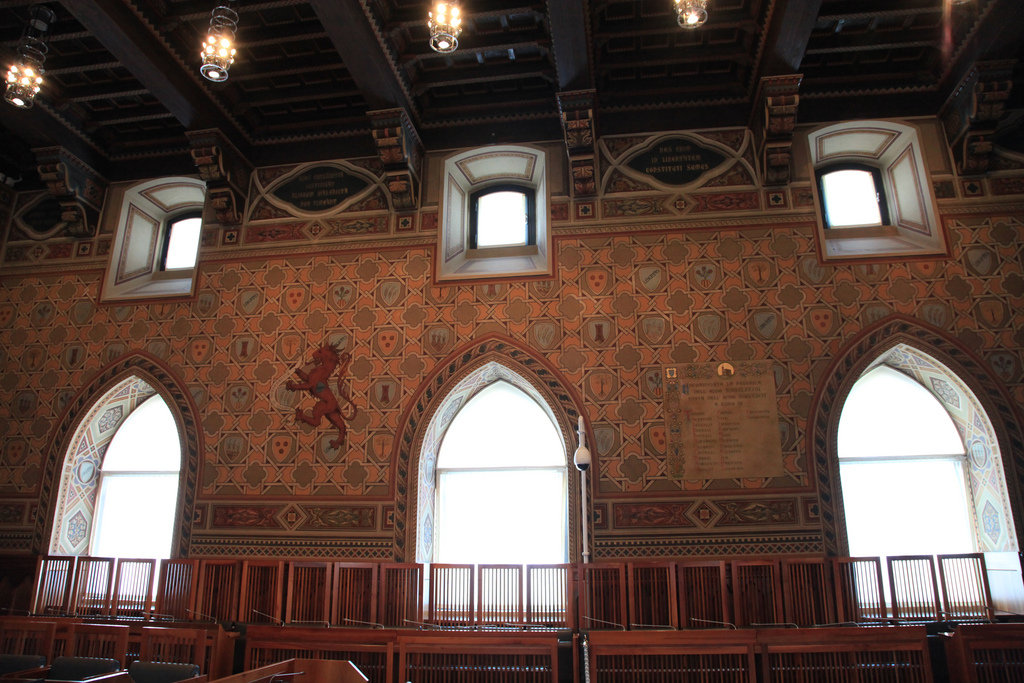 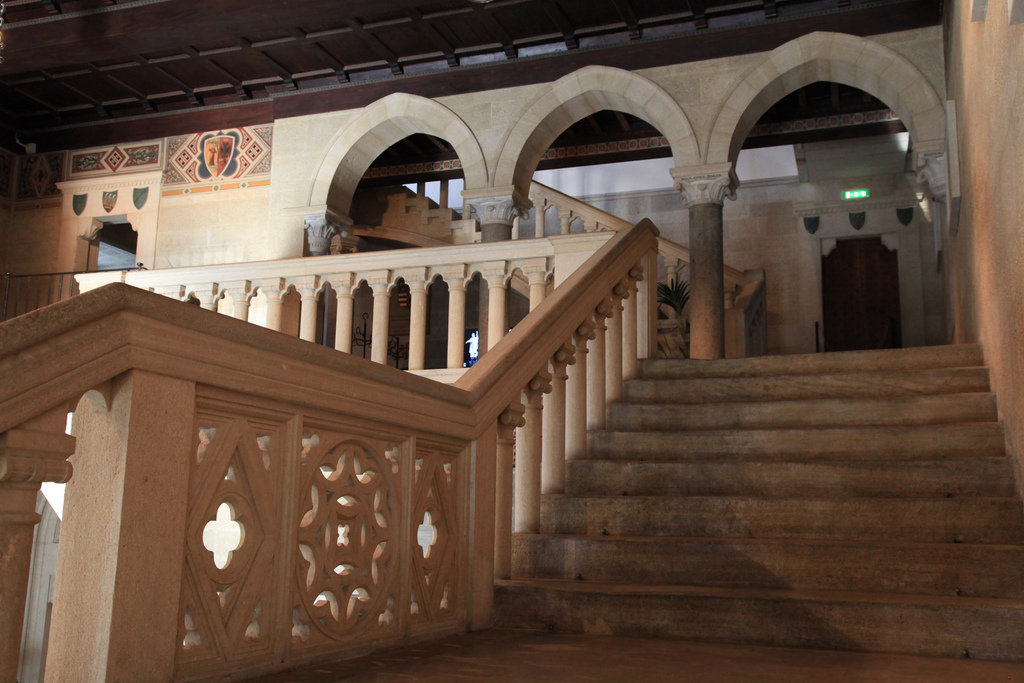 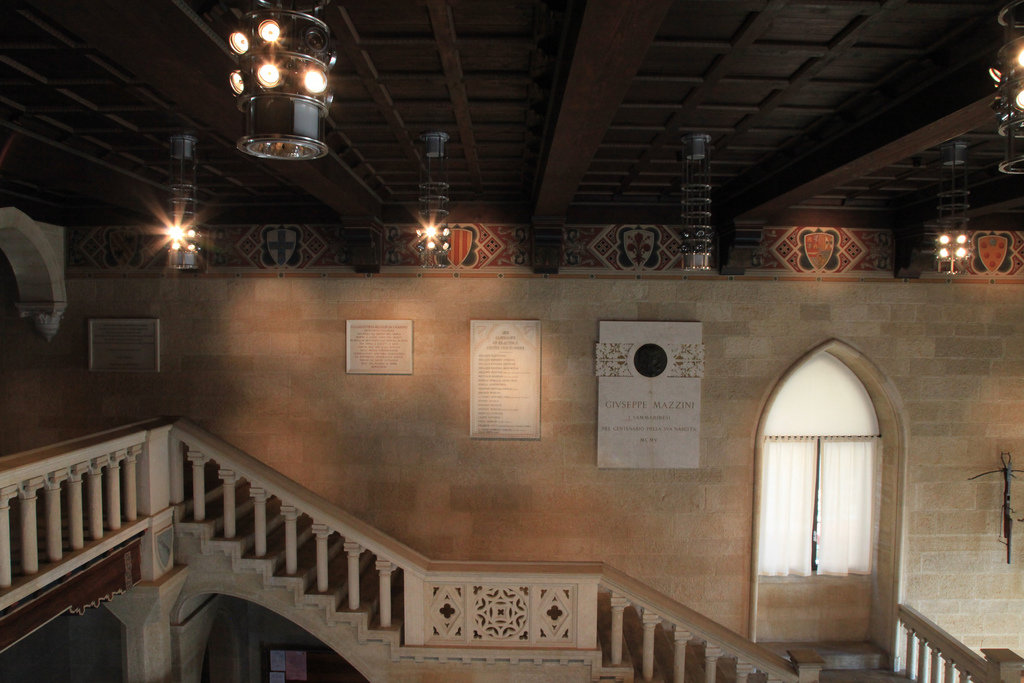 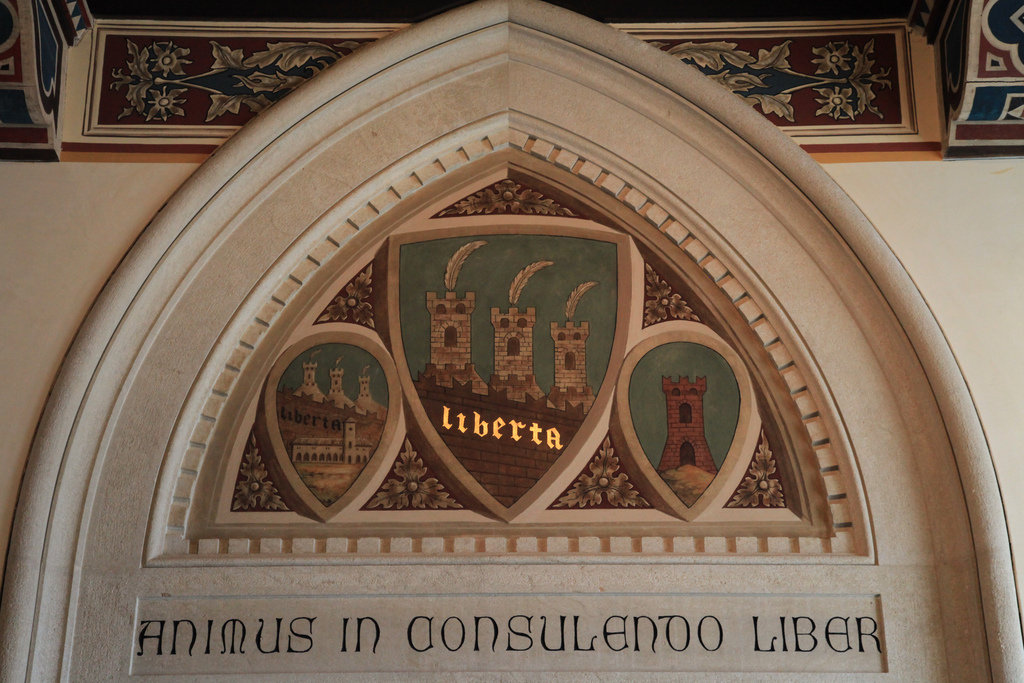