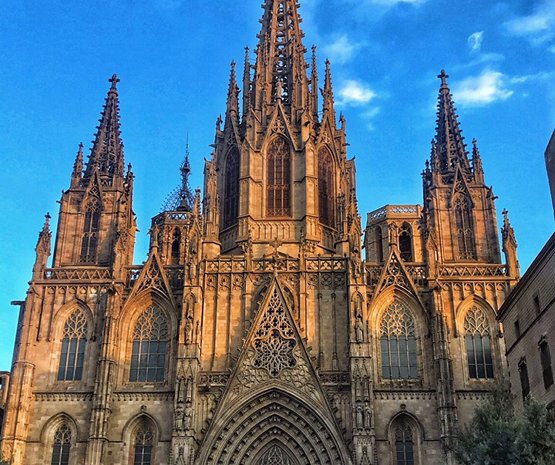 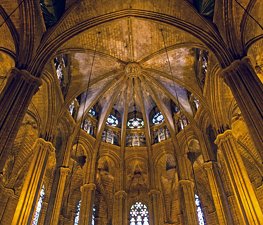 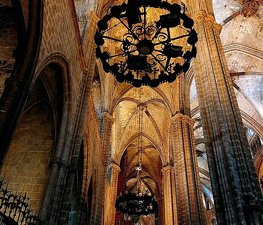 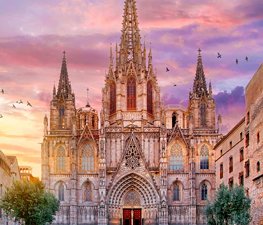 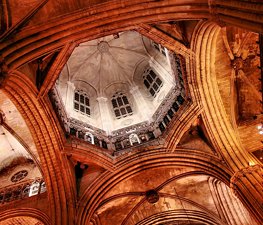 The Cathedral of the Holy Cross and Saint Eulalia (català. Catedral de la Santa Creu i Santa Eulàlia, español. Catedral de la Santa Cruz y Santa Eulalia), also known as Barcelona Cathedral, is the Gothic cathedral and seat of the Archbishop of Barcelona, Spain. The cathedral was constructed from the 13th to 15th centuries, with the principal work done in the 14th century. The cloister, which encloses the Well of the Geese (Font de les Oques) was completed in 1448. In the late 19th century, the neo-Gothic façade was constructed over the nondescript exterior that was common to Catalan churches. The roof is notable for its gargoyles, featuring a wide range of animals, both domestic and mythical.

It is a hall church, vaulted over five aisles, the outer two divided into chapels. The transept is truncated. The east end is a chevet of nine radiating chapels connected by an ambulatory. The high altar is raised, allowing a clear view into the crypt.

The cathedral is dedicated to Eulalia of Barcelona, co-patron saint of Barcelona, a young virgin who, according to Catholic tradition, suffered martyrdom during Roman times in the city. One story says that she was exposed naked in the public square and a miraculous snowfall in mid-spring covered her nudity. The enraged Romans put her into a barrel with knives stuck into it and rolled it down a street (according to tradition, the one now called Baixada de Santa Eulàlia). The body of Saint Eulalia is entombed in the cathedral's crypt.

The choir stalls retain the coats-of-arms of the knights of the Order of the Golden Fleece. In his first trip into Spain, Charles, the future Holy Roman Emperor, selected Barcelona as the site of a chapter of his Order. The king had arrived for his investiture as Count of Barcelona, and the city, as a Mediterranean port, offered the closest communication with other far-flung Habsburg dominions, while the large proportions of the cathedral would accommodate required grand ceremonies. In 1518 the Order's herald, Thomas Isaac, and its treasurer, Jean Micault, were commissioned to prepare the sanctuary for the first sitting of the chapter in 1519. Juan de Borgonya executed the painted decoration of the sanctuary.

One side chapel is dedicated to "Christ of Lepanto", and contains a cross from a ship that fought at the Battle of Lepanto (1571). Catalan legend states that during the battle, the suddenly and miraculously shifted to the right to avoid being hit by a cannonball, a miraculous sign from God that the Ottomans would be defeated. The chapel of Christ of Lepanto also contains the shrine and sepulchre of Saint Olegarius, who was a Bishop of Barcelona and an Archbishop of Tarragona.

In addition to Saints Eulàlia and Olegarius, the cathedral contains the tombs of Saint Raymond of Penyafort, Count Ramon Berenguer I and his third wife Almodis de la Marche, and bishops Berenguer de Palou II, Salvador Casañas y Pagés, and Arnau de Gurb, who is buried in the Chapel of Santa Llúcia, which he had constructed.

The cathedral has a secluded Gothic cloister where 13 white geese are kept, the number explained by the assertion that Eulalia was 13 when she was martyred.

A program of cleaning and restoration of the cathedral was carried out from 1968-72.

Parts of an early Christian and visigothic episcopal complex including the baptistery (4th century), a basilical hall (5th century), a cross shaped church (6th-7th century) and bishop's palace (6th-7th century) are displayed in the Barcelona City History Museum archaeological underground. Reportedly, this Visigothic chapel was dedicated to Saint James, and was the proprietary church of the Viscounts of Barcelona. However, in a document from the Second Council of Barcelona in 599, it states that the cathedral was dedicated to the Holy Cross. This church was severely damaged by al-Mansur (Almanzor) during his attack on Barcelona in 985.

In 1046, Count Ramon Berenguer I and his wife Almodis, together with Bishop Guislabert, began construction of a Romanesque cathedral at the site; it was consecrated in November 1058. The cathedral was constructed over the crypt of the former church. It has been reported that a Viscount of Barcelona, Mir Geribert, sold the site to Bishop Guislebert in 1058, however this date does not coincide with the reported start of construction.

The present Gothic cathedral was begun on the foundations of the previous churches on 1 May 1298; James II the Just was King of Aragon at the time, and Bernat Pelegri was Bishop of Barcelona. The church was built from the east end towards the west end, with a simple west facade completed in 1417. The cloister was completed in 1448, making the total duration of construction 150 years. In the late 19th century, Miguel Girona i Agrafel offered to complete the neo-Gothic facade and towers as inspired by the original 15th-century design and drawn by the architect Josep O. Mestres. This work was completed in 1913 by Girona's children.

OK Apartment Barcelona
You can pay €2.50 to go to the rooftops of this building. This Cathedral is free to visit anytime except for between 13:00 - 17:00 when a €6 donation is requested (rooftop & choir visit included).

The Telegraph
On arrival - 8pm: Head for the great Gothic cathedral, and the tangle of medieval streets around it – you’ll get lost, everybody does, but that’s the charm of the Barri Gòtic.

Luciana Vicente
If the line is to big, go to another museum near and probably when you finish the line will be smaller! The church is beautiful and wort to visit

Maria Nemogai
One of the city gems. Take time to just sit outside and gaze at the building for an hour or so. Btw the facade and this gorgeous roof weren’t always there :) check out the history )

Stacy Bo Bacy
Built between the 13th and 15th centuries, but the main facade and all the visible gothic elements were added during the late 19th and early 20th century. Free outside of 1-5:30pm.
Load more comments
foursquare.com
8.8/10
Mike B, 憑き狐娘 and 312,892 more people have been here
I've been here
Add to wishlist

Cathedral of the Holy Cross and Saint Eulalia on Foursquare

The Museu Frederic Marès is an art and sculpture museum in Barcelona.

The Museu Picasso (English: Picasso Museum) in Barcelona, Spain, has

La Rambla is a street in central Barcelona, popular with both tourists 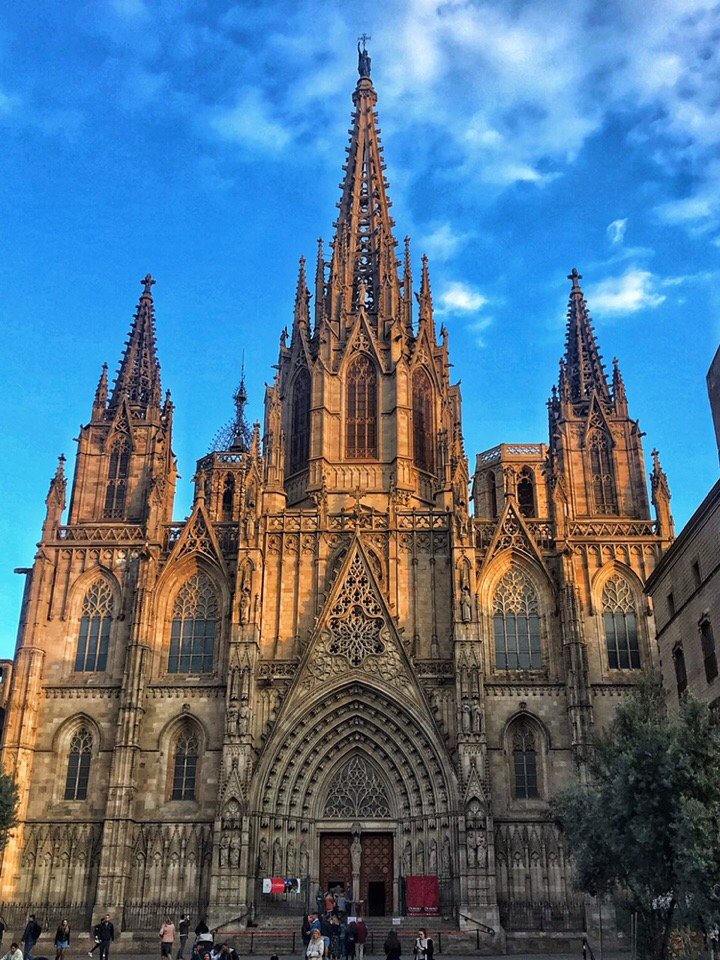 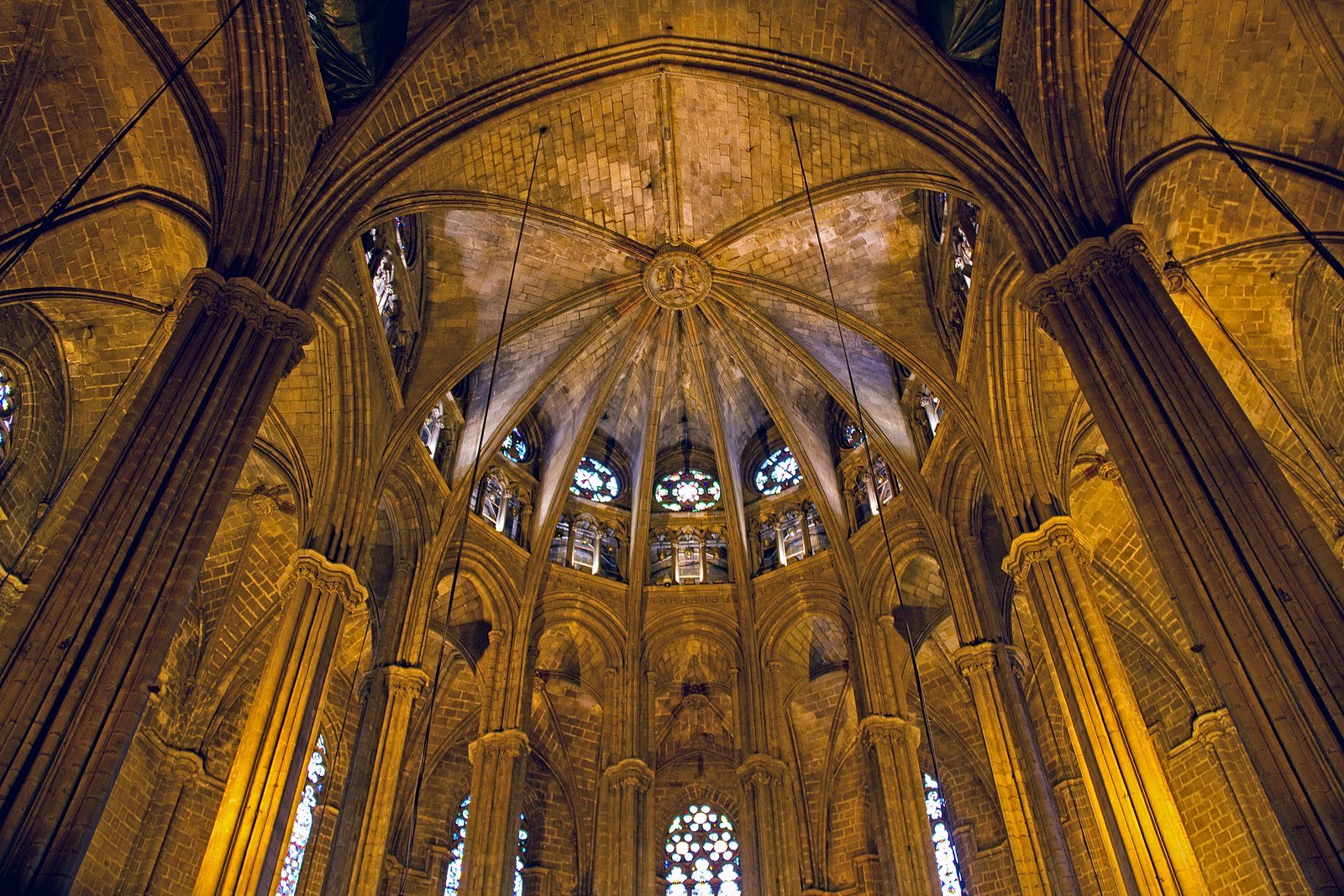 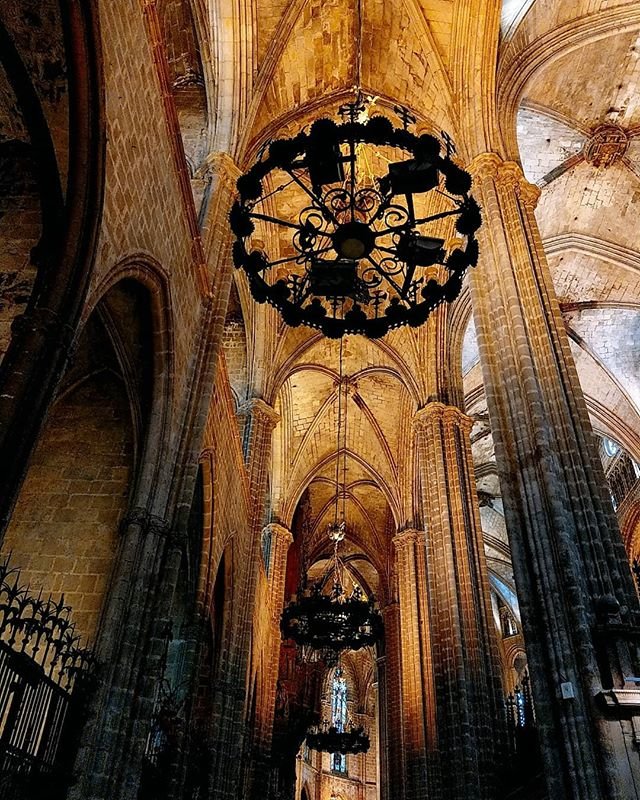 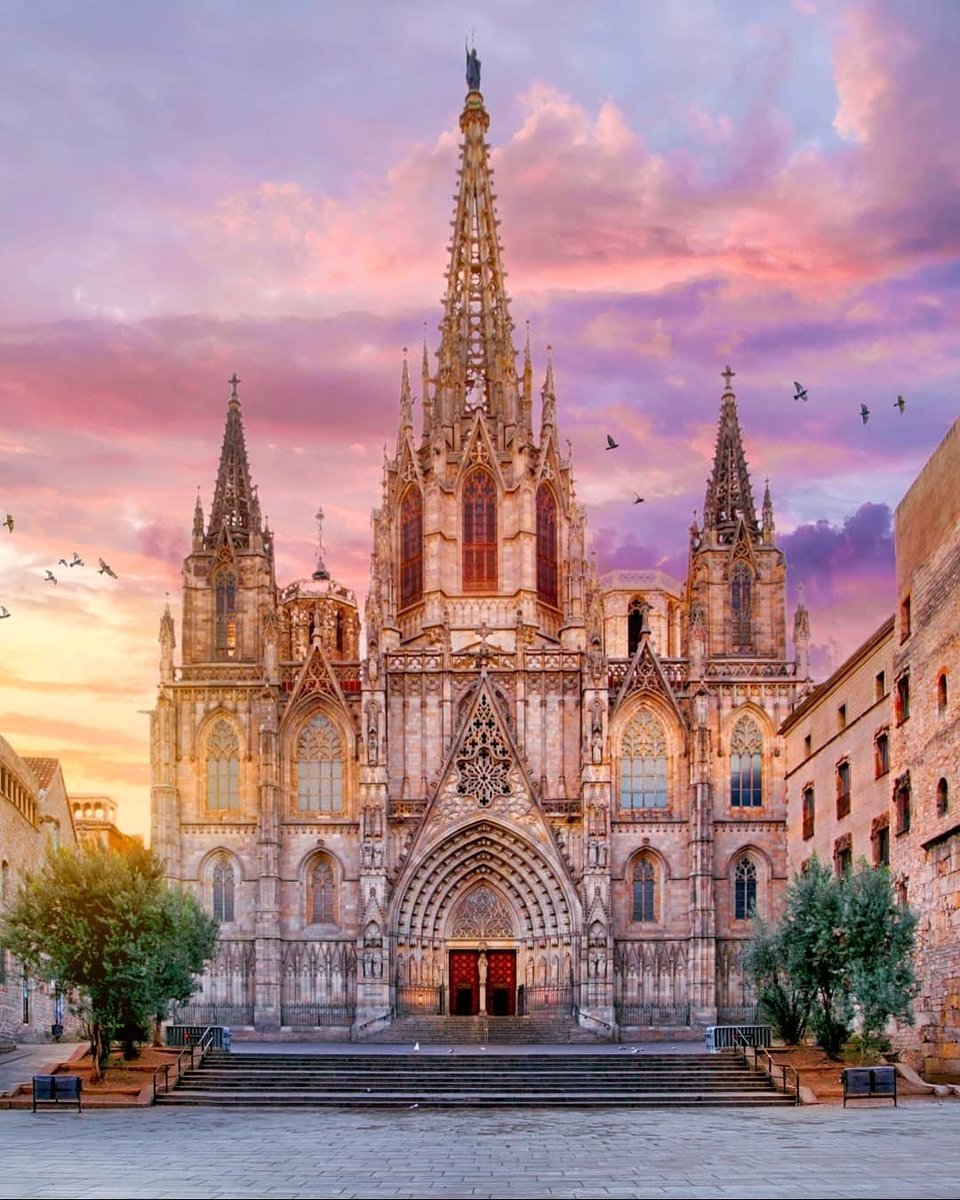 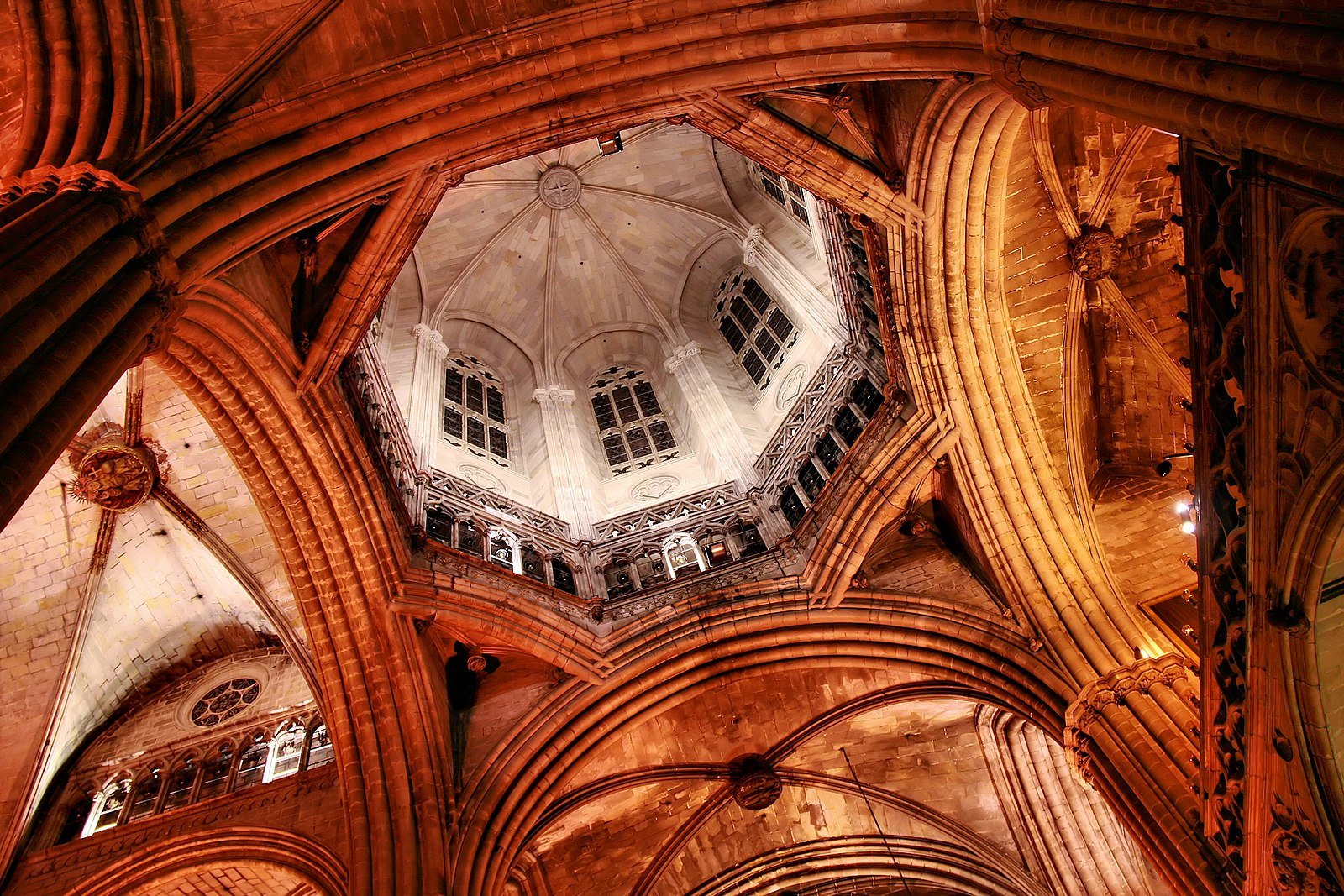 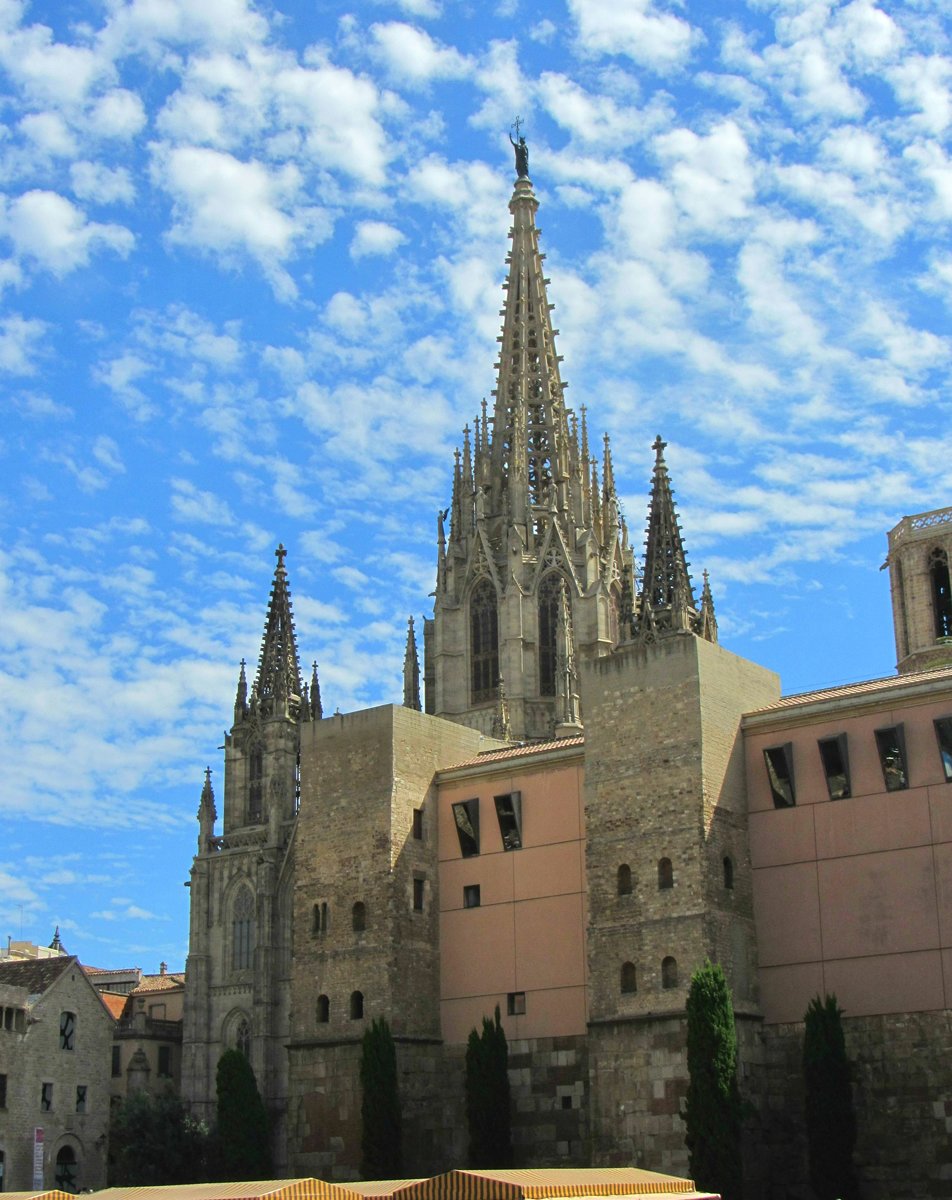 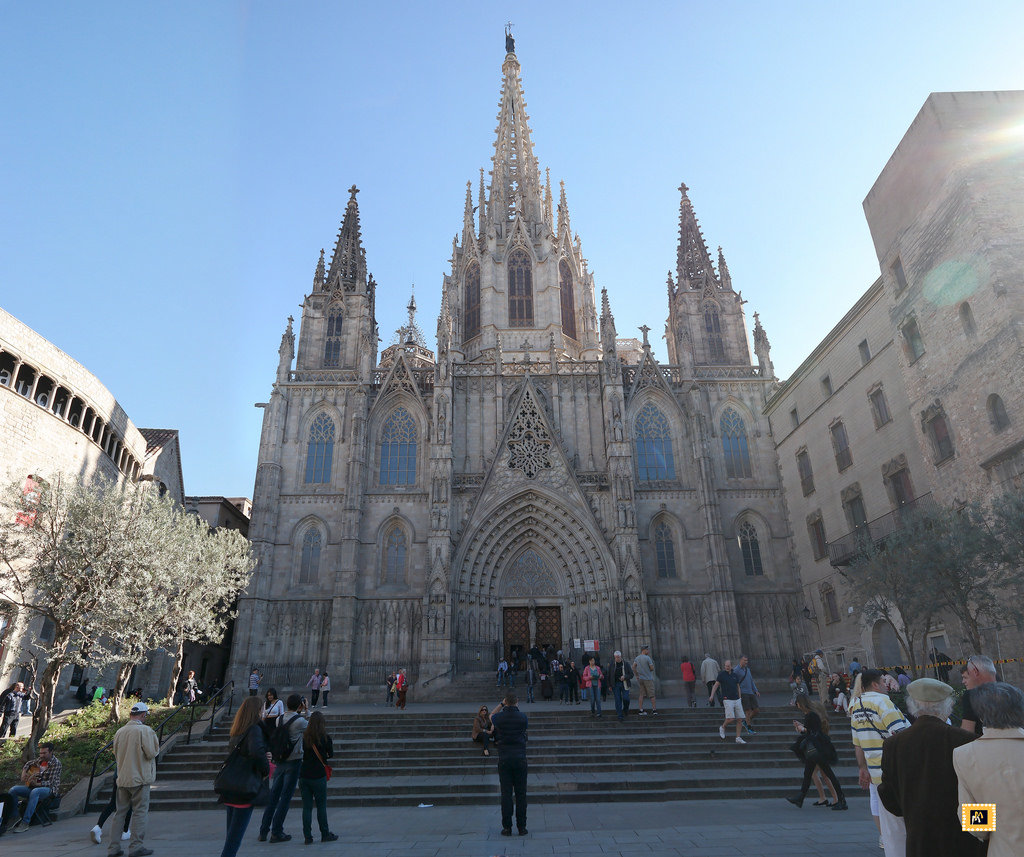 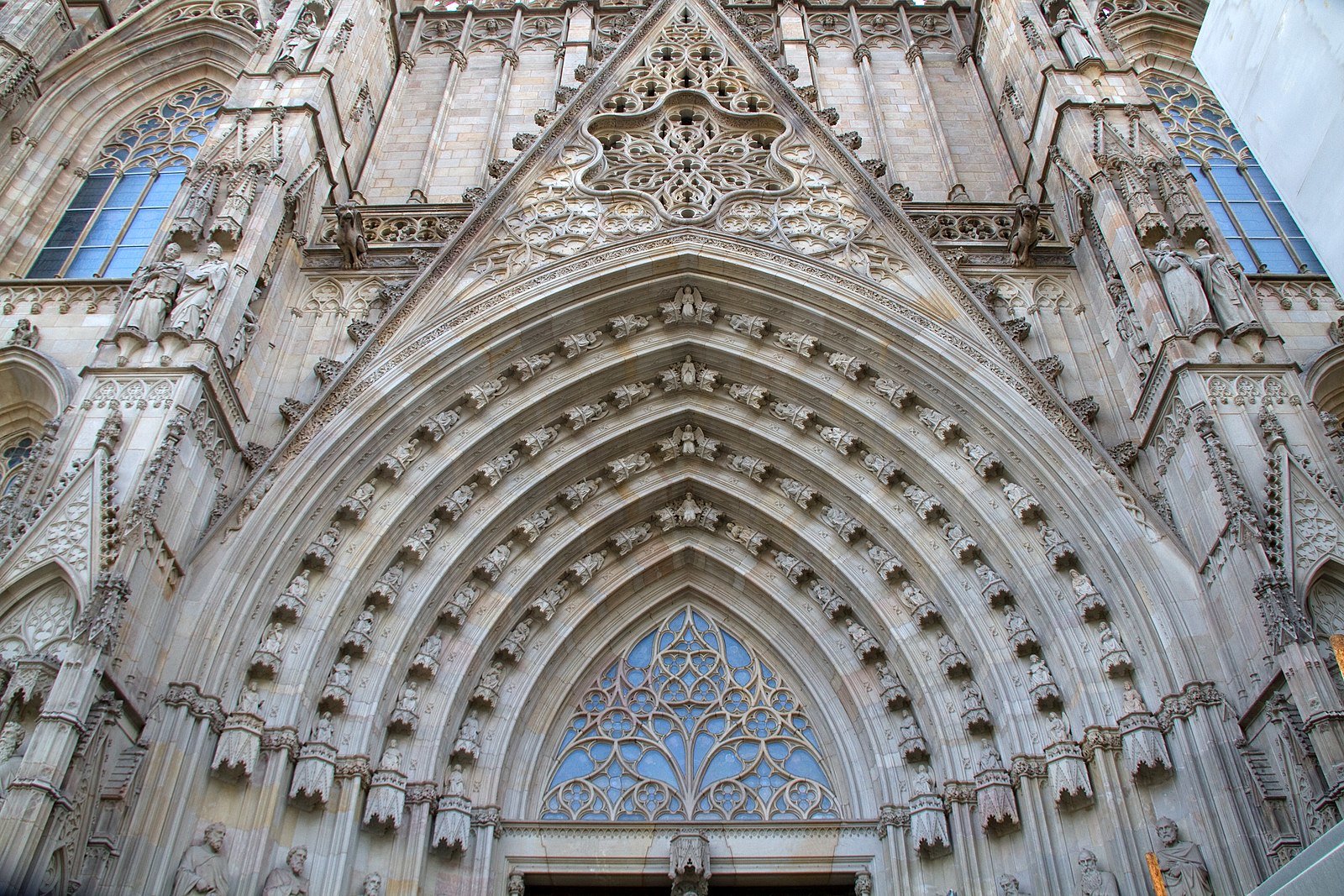 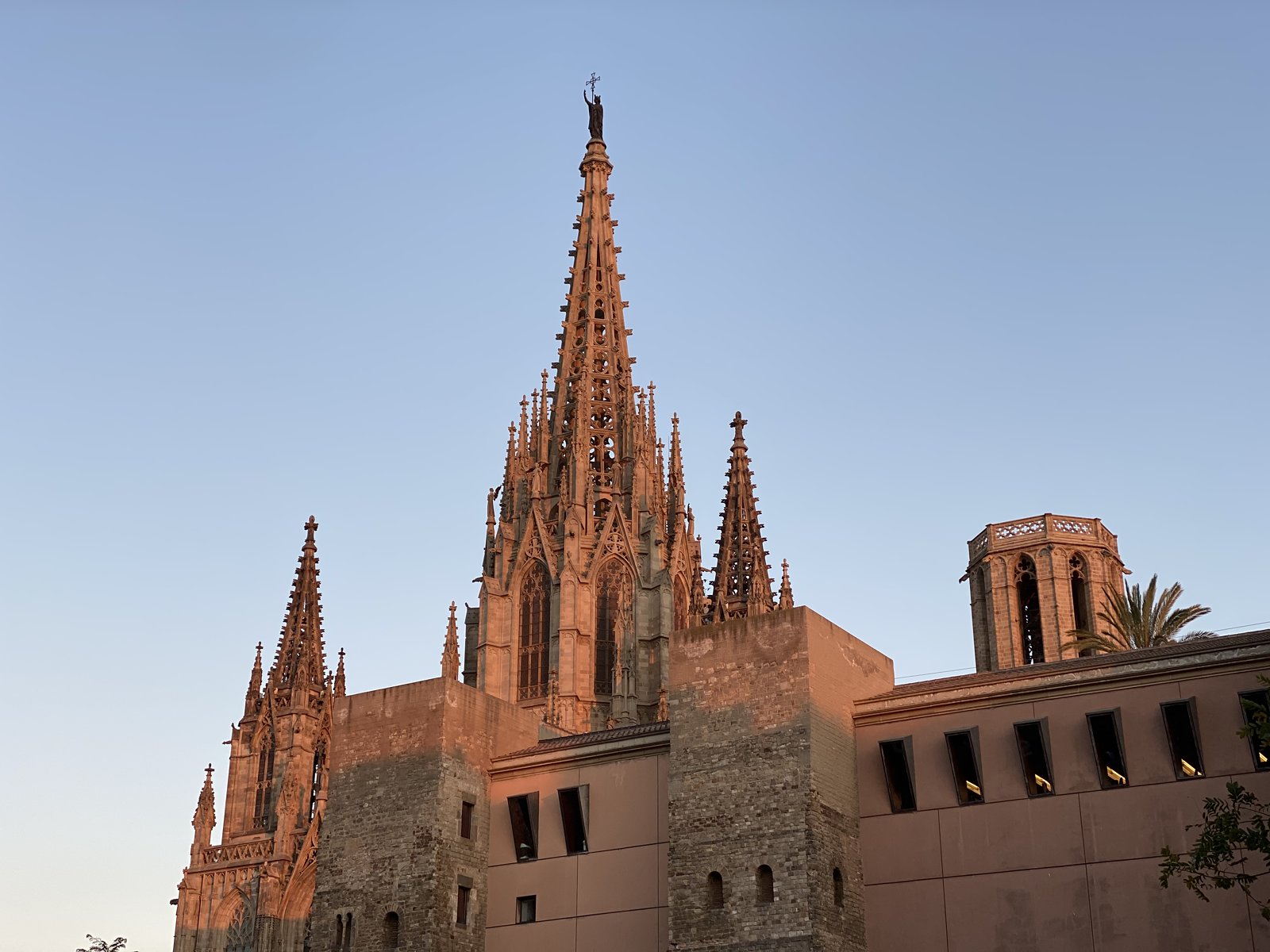 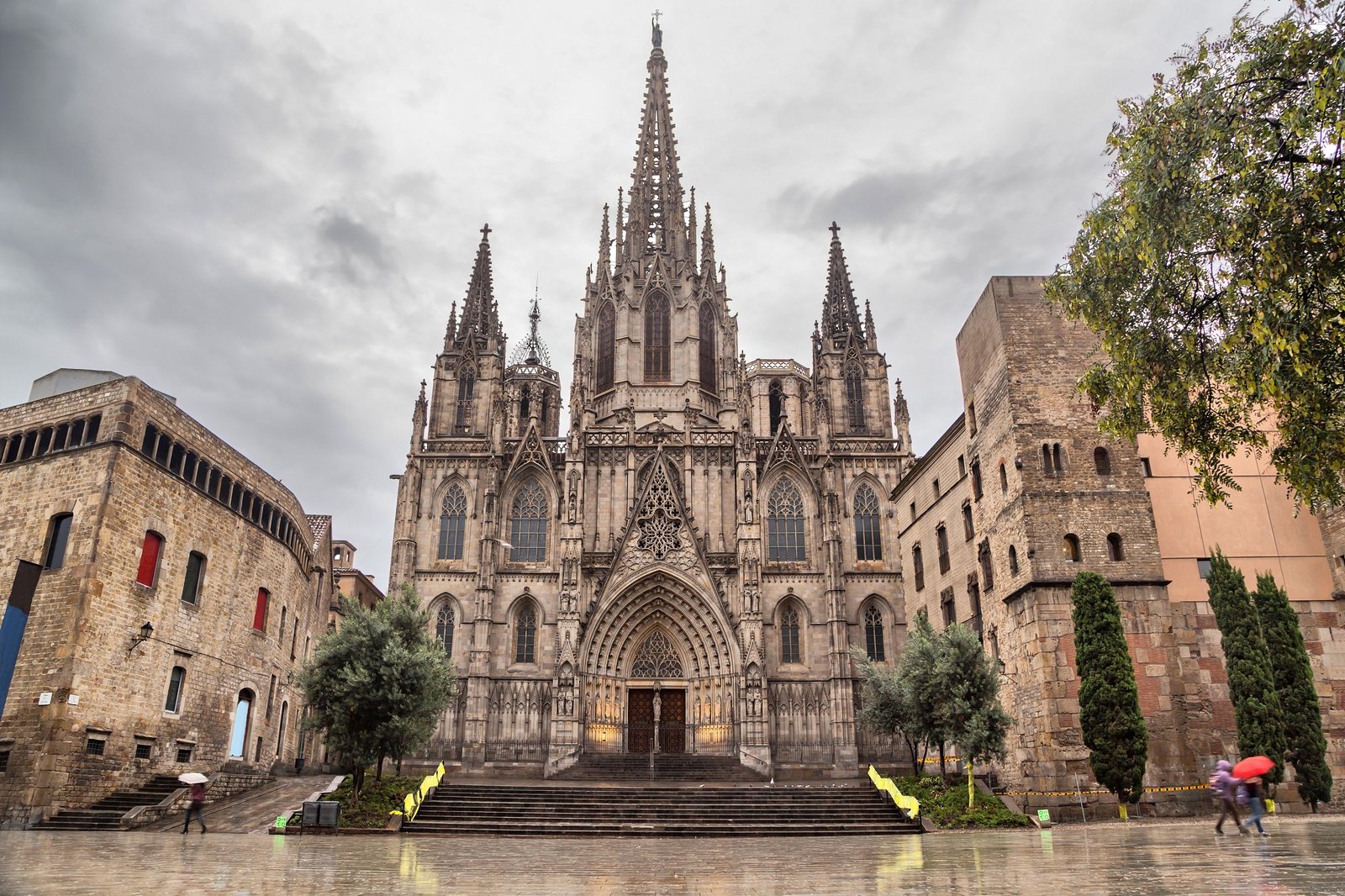 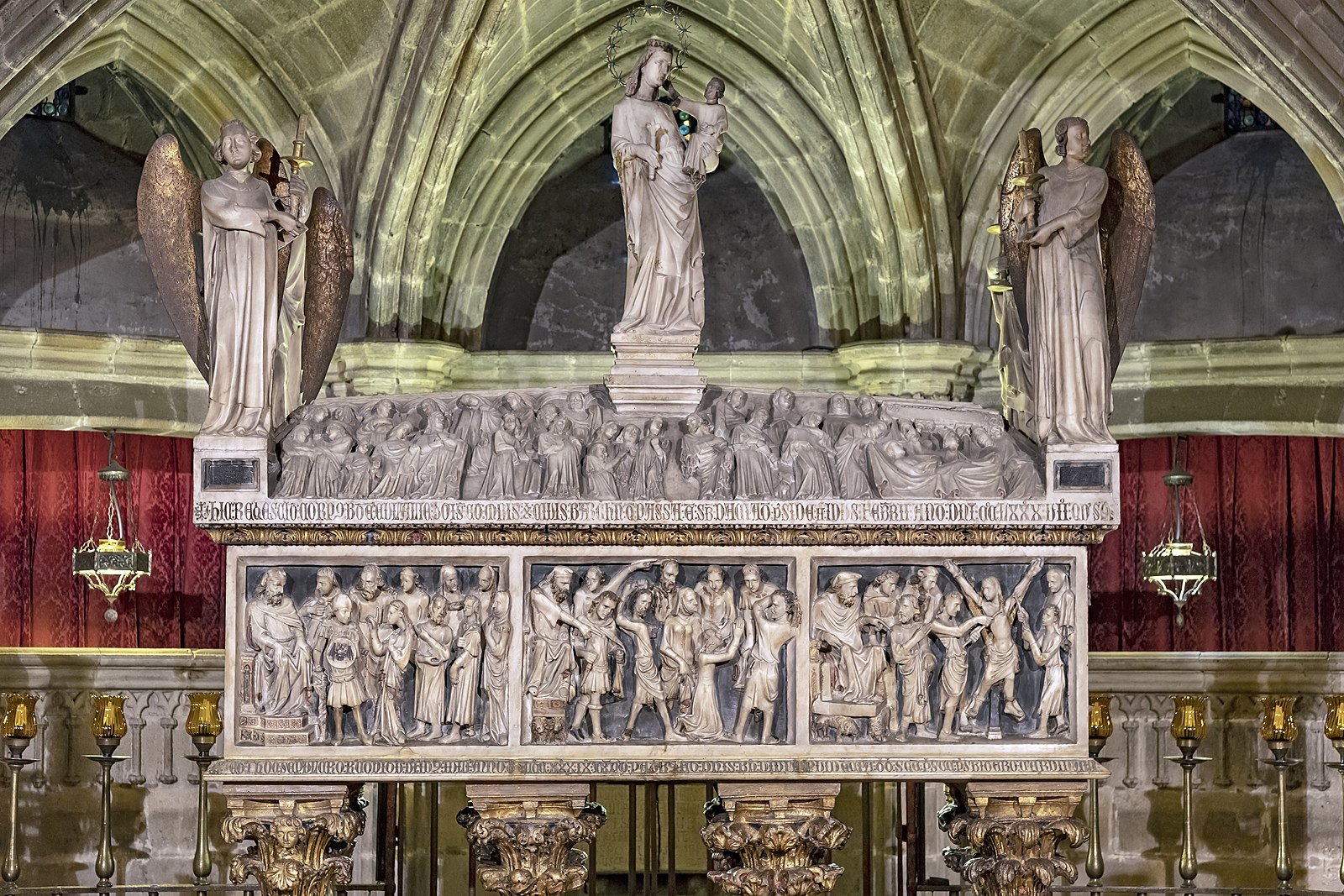 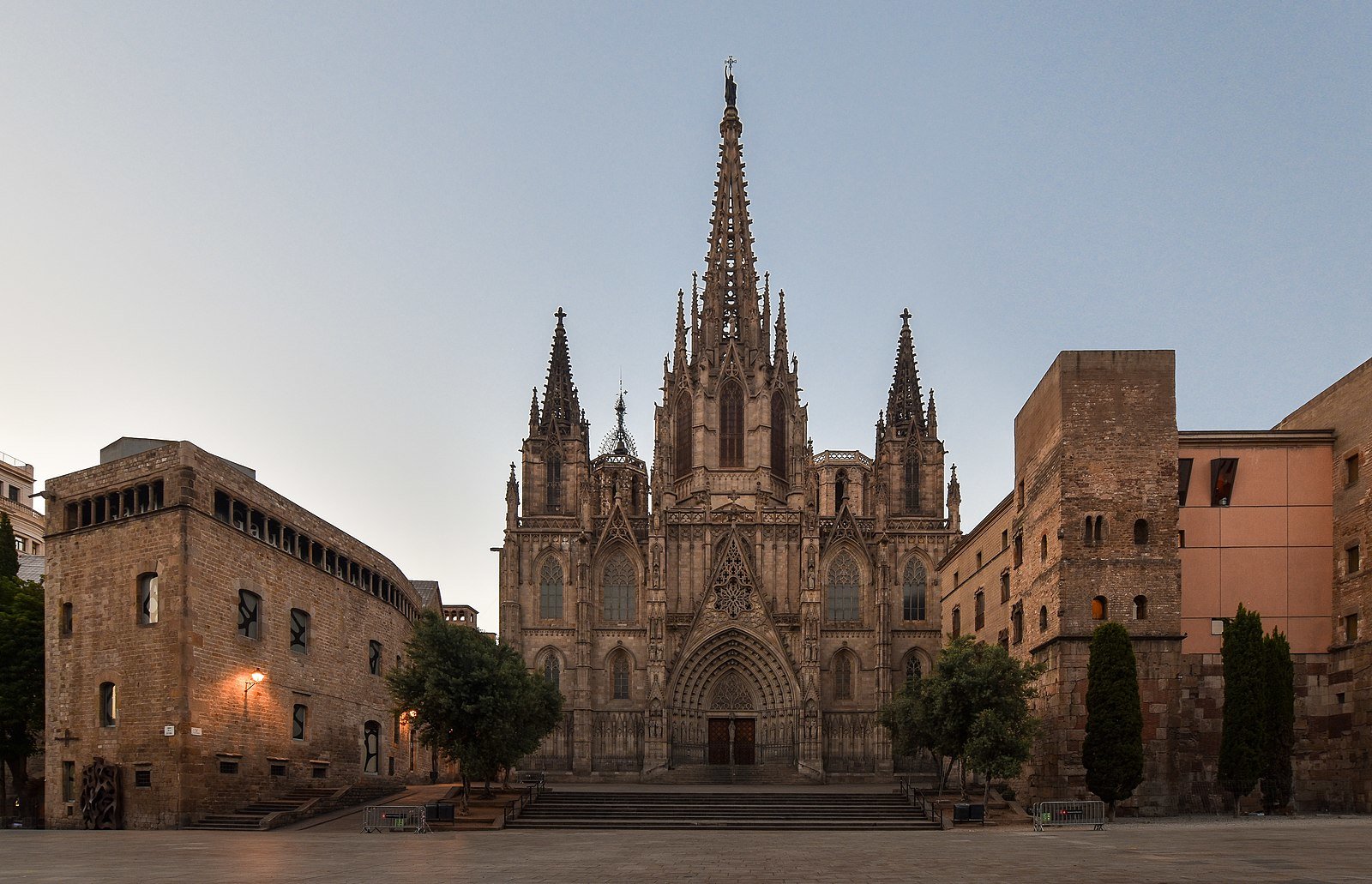 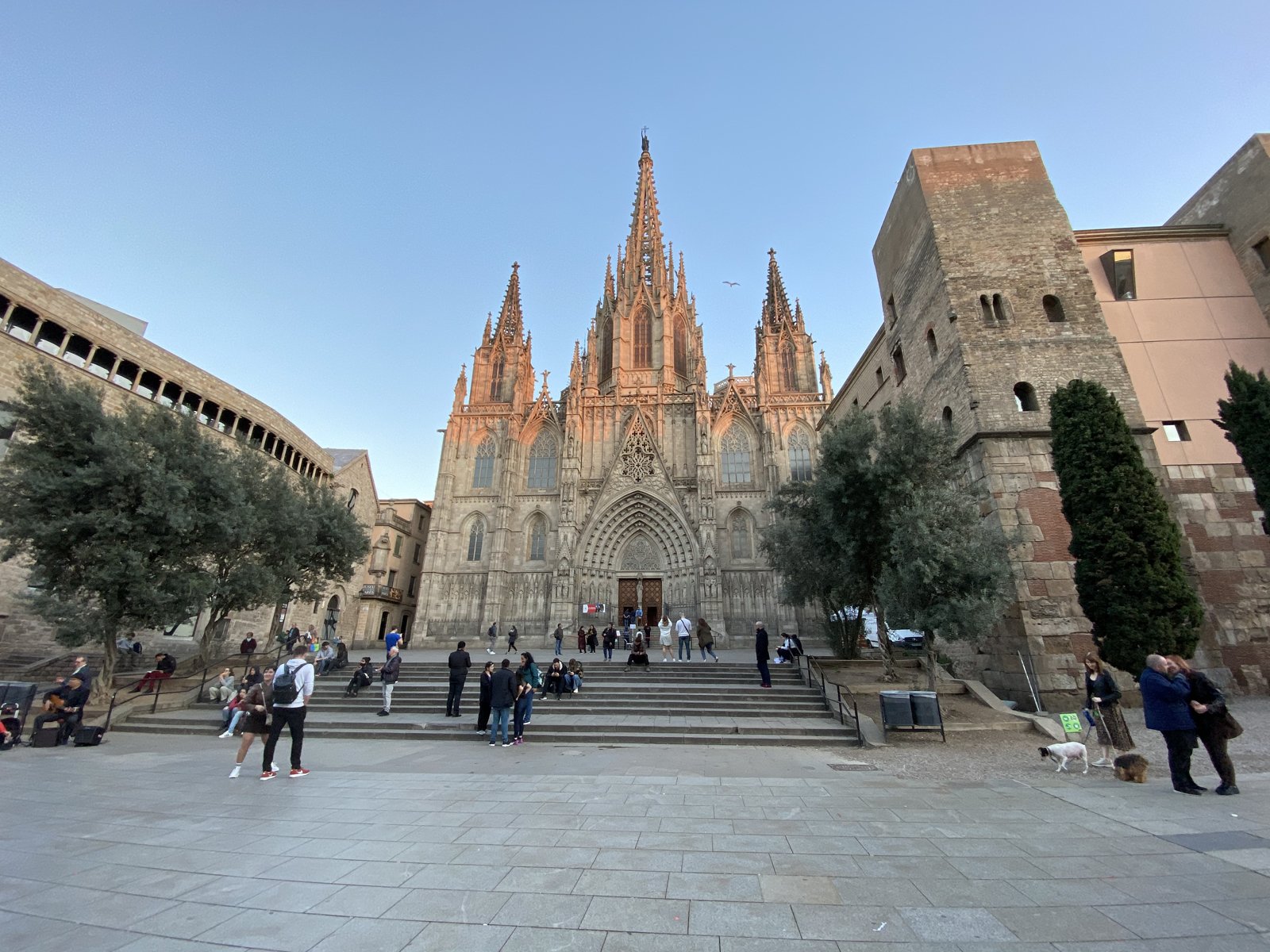 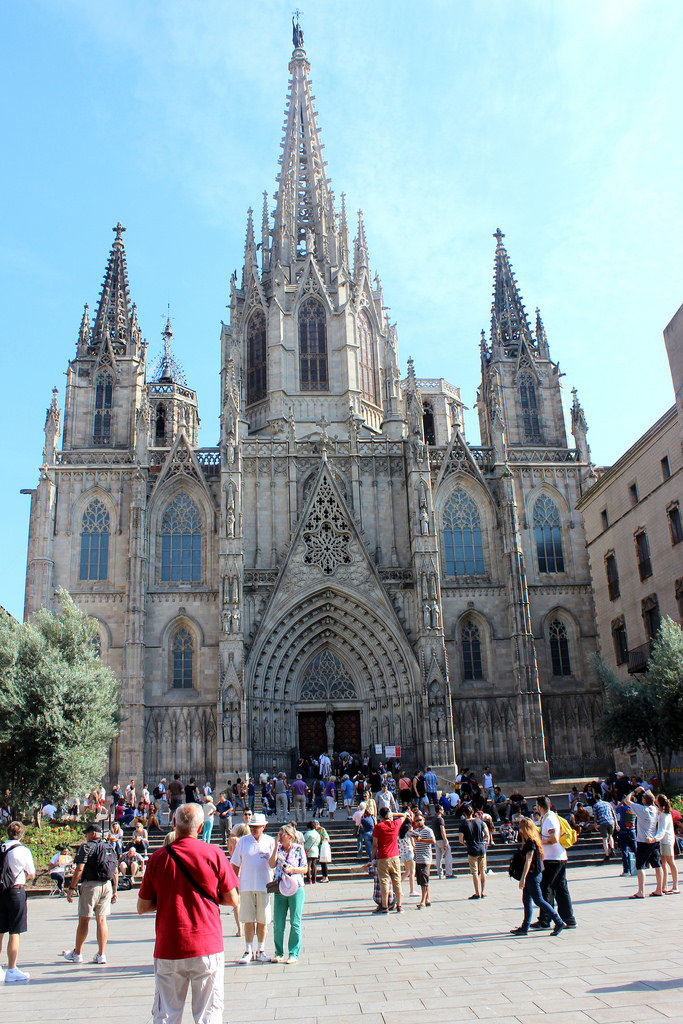 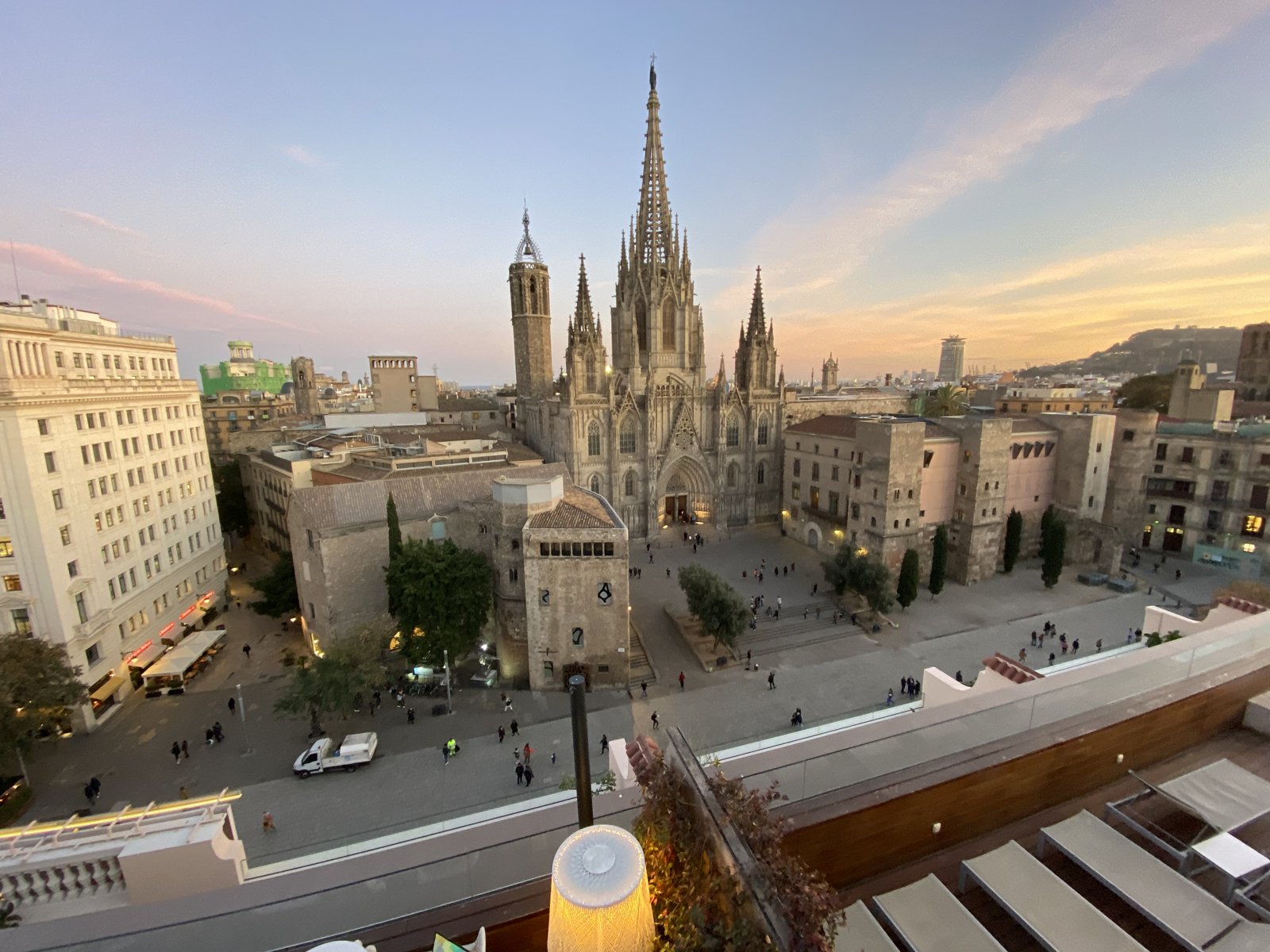 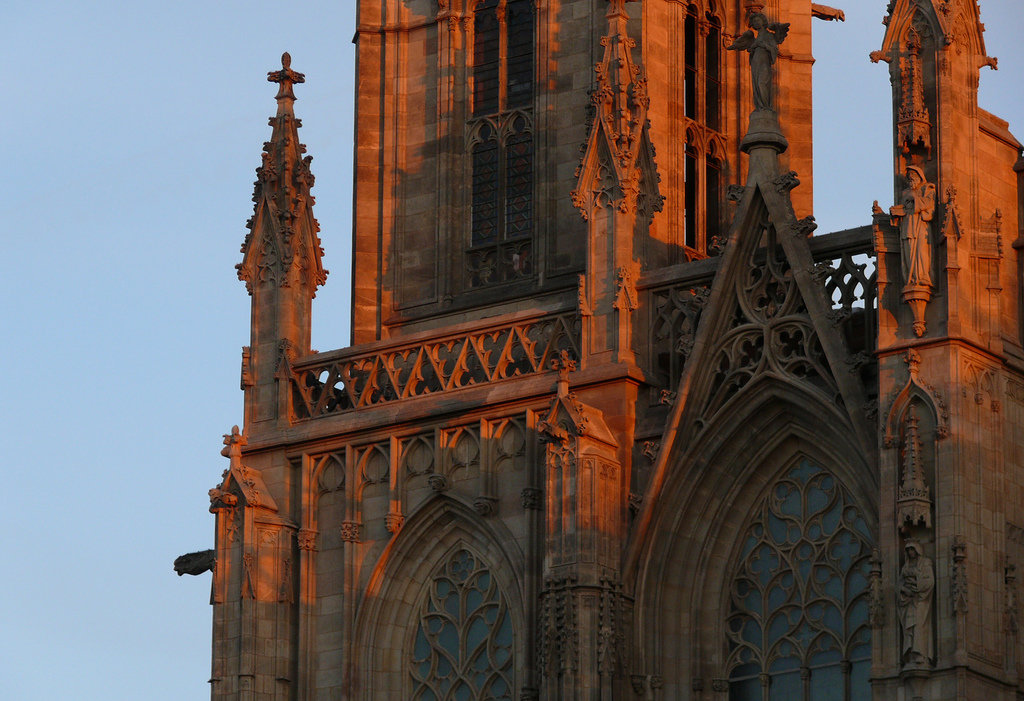 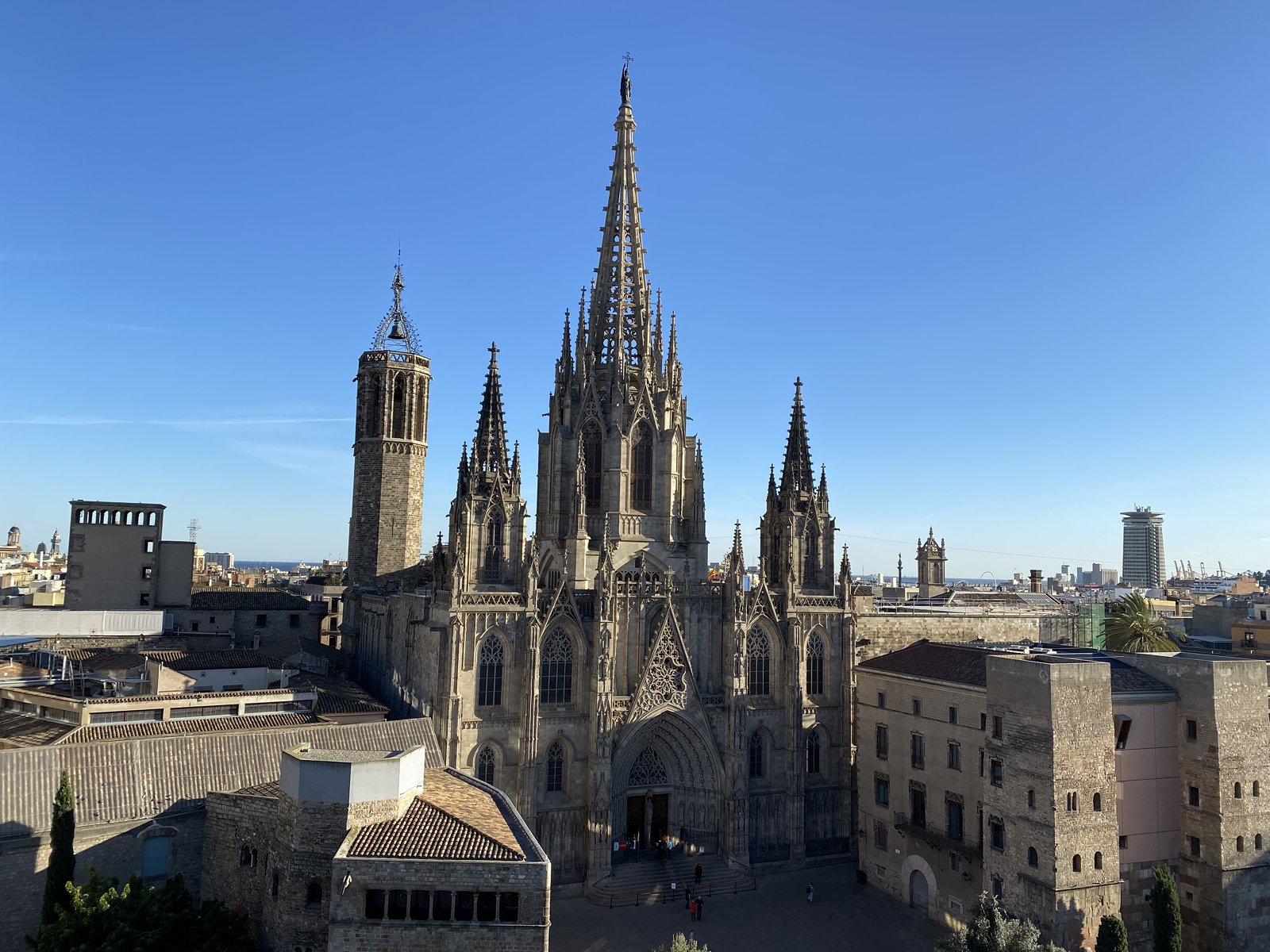 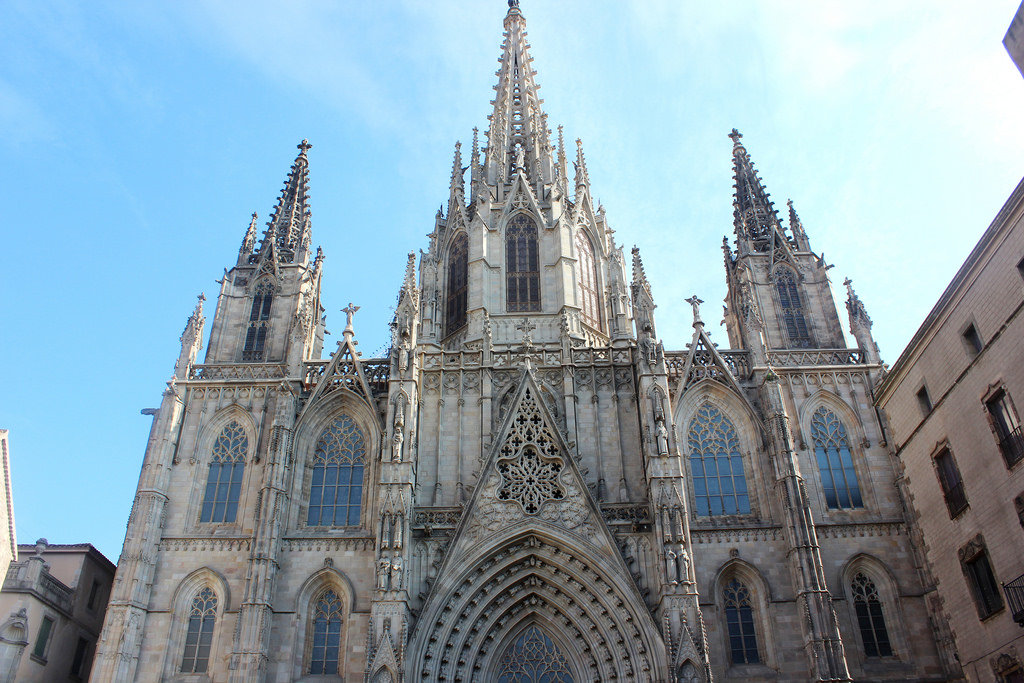 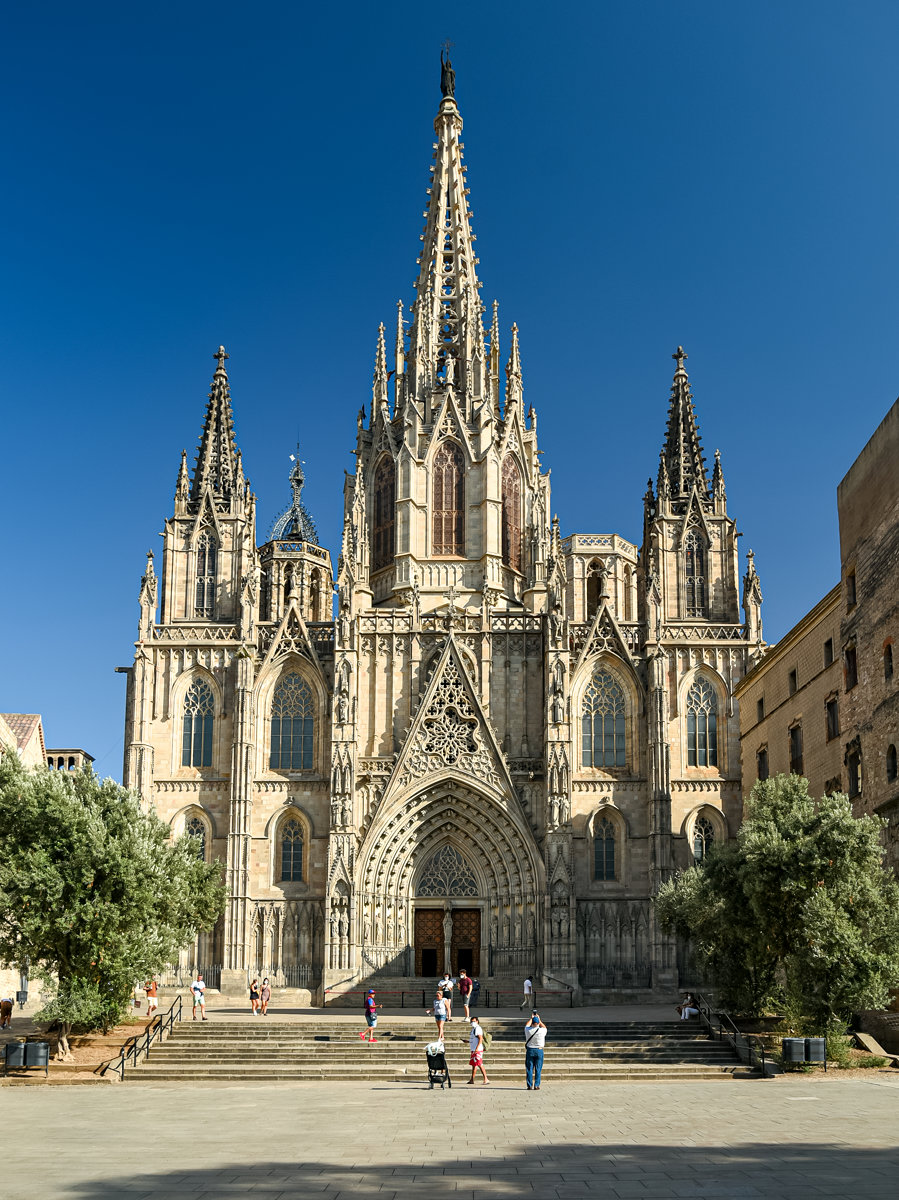 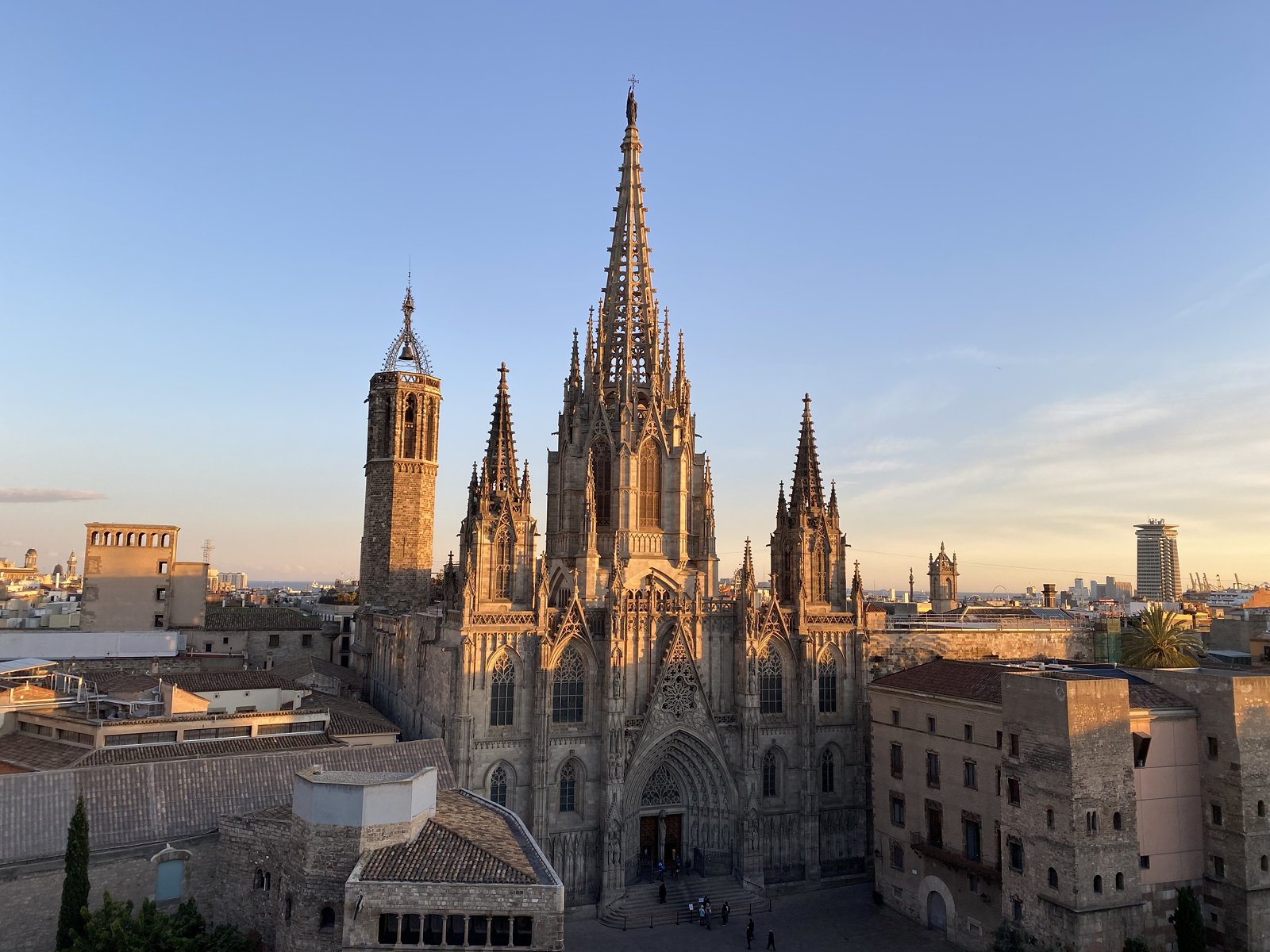 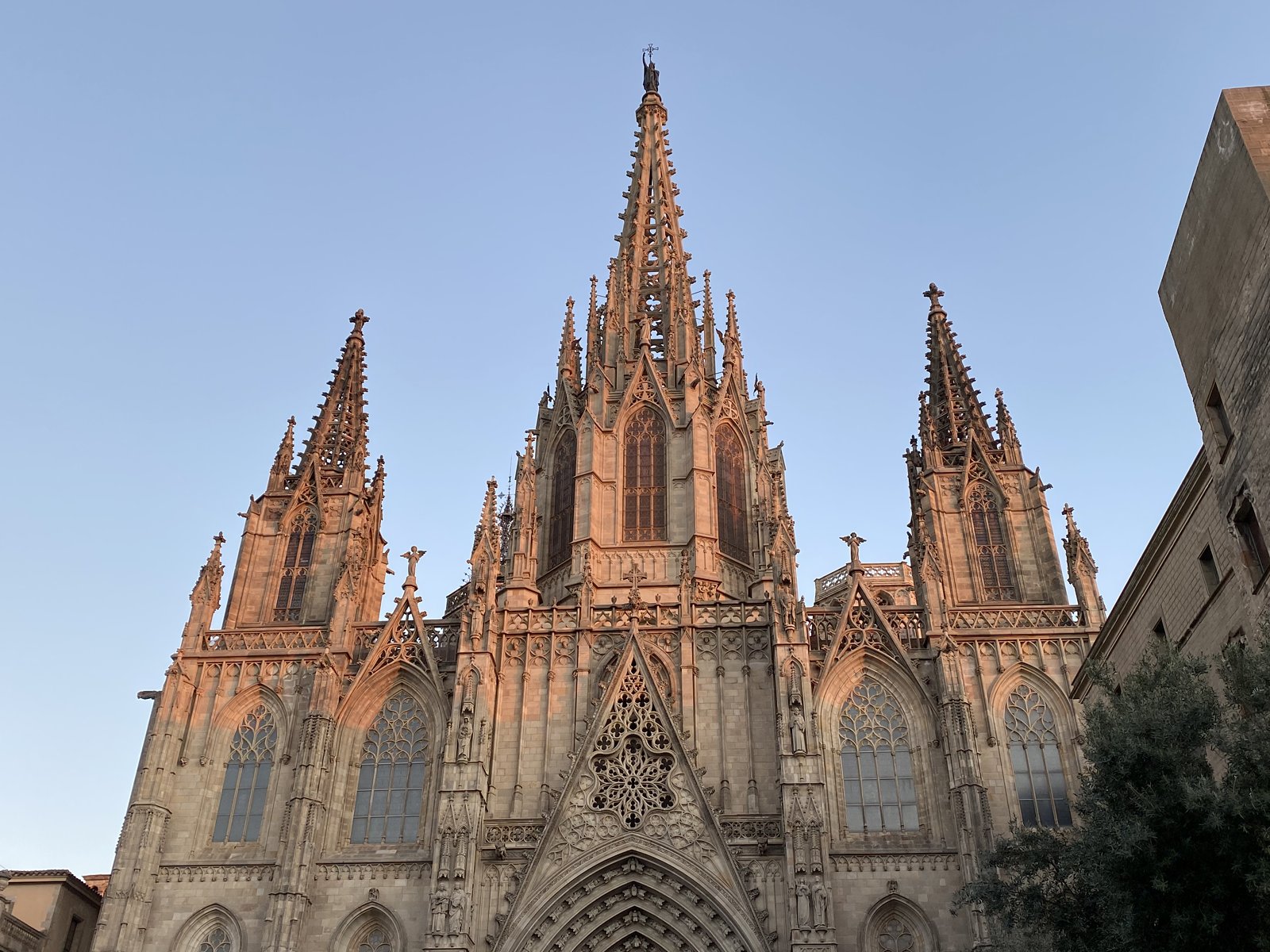