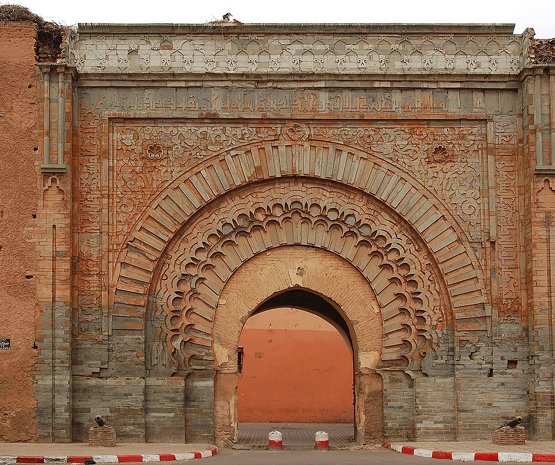 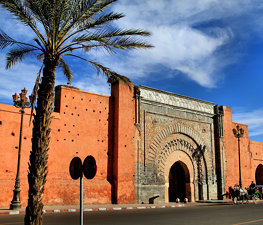 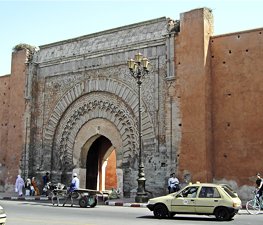 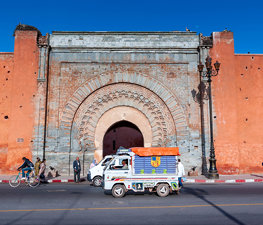 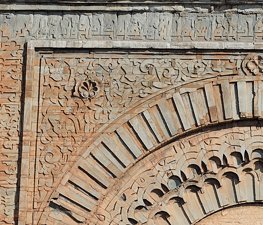 Bab Agnaou (Arabic: باب اكناو; Berber: Bab Agnaw or Tawurt n Wegnaw) is one of the nineteen gates of Marrakesh, Morocco. It was built in the 12th century in the time of the Almohad dynasty.

While Bab er Robb was the official entrance to the city, Bab Agnaou gives entrance to the royal kasbah in the southern part of the medina of Marrakech. The kasbah, built by the Almohad sultan Abu Yusuf Yaqub al-Mansur, is the site of El Mansouria (the kasbah mosque), the El Badi Palace and the Saadian Tombs.

The most common theory is that the name Agnaou, like Gnaoua, is thought to come from the Berber word "agnaw" which literally means "deaf man, mute man" and which is used for 'non-Berber people' (who can't understand or speak the Berber language) and usually it denotes Sub-Saharan 'black people'. This can be explained by the gate facing south, away from Berber North Africa and towards sub-Saharan Africa. Some sources dispute this and translate Agnaou from Berber as 'the mute ram without horns'.

The gate was called Bab el-Kuḥel (also referring to black people) or Bab Leqṣer (palace gate) in some historical sources.[]

The function of the gate, as royal entrance, was primarily decorative. The façade consists of alternating sections of stone, likely quarried not too far from Marakesh, and brick surrounding the horseshoe arch. The corner-pieces are decorated with floral decorations extending around a shell. This ornamentation is framed by three panels and on these panels is an inscription from the Quran in Maghribi, foliated Kufic letters.

The stone is seen to be in a poor state. The causes of the decay have been attributed to the presence of soluble salts, particularly chlorides and sulfates, present in the mortar used to fix the stones. Local air pollution is also having a negative effect on the state of the gate.

Bab Agnaou was renovated and its opening reduced in size, during sultan Mohammed ben Abdallah, sometime in the mid to late 18th Century.[] Forerunners of this horseshoe-shaped gate, with its corner-pieces framed by Quranic inscriptions, can be found in the Mezquita in Córdoba and it shows many similarities to the contemporary Bab Er-Rouah in Rabat.

The Agdal Gardens (or Aguedal Gardens) cover about 400 hectares (4.0 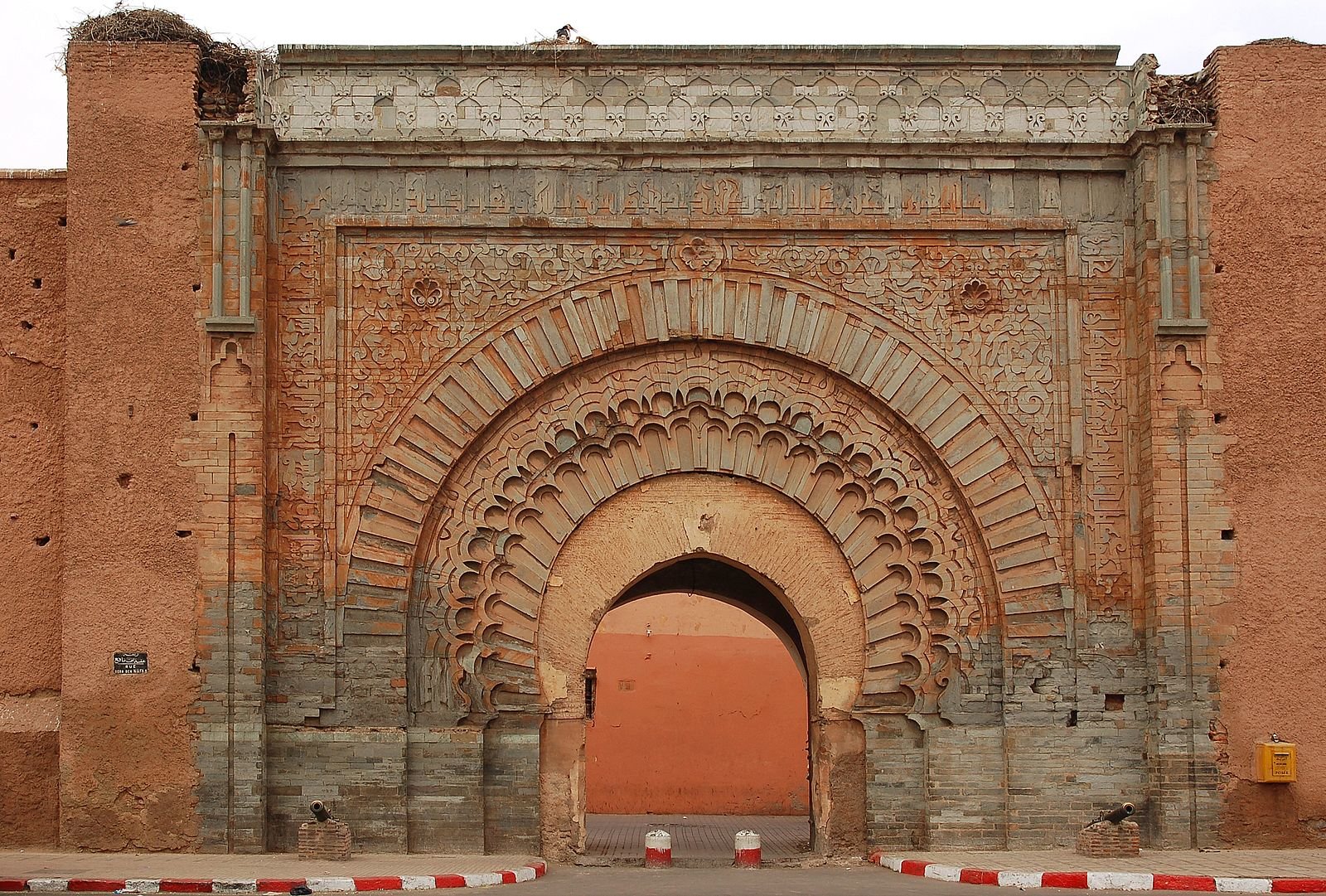 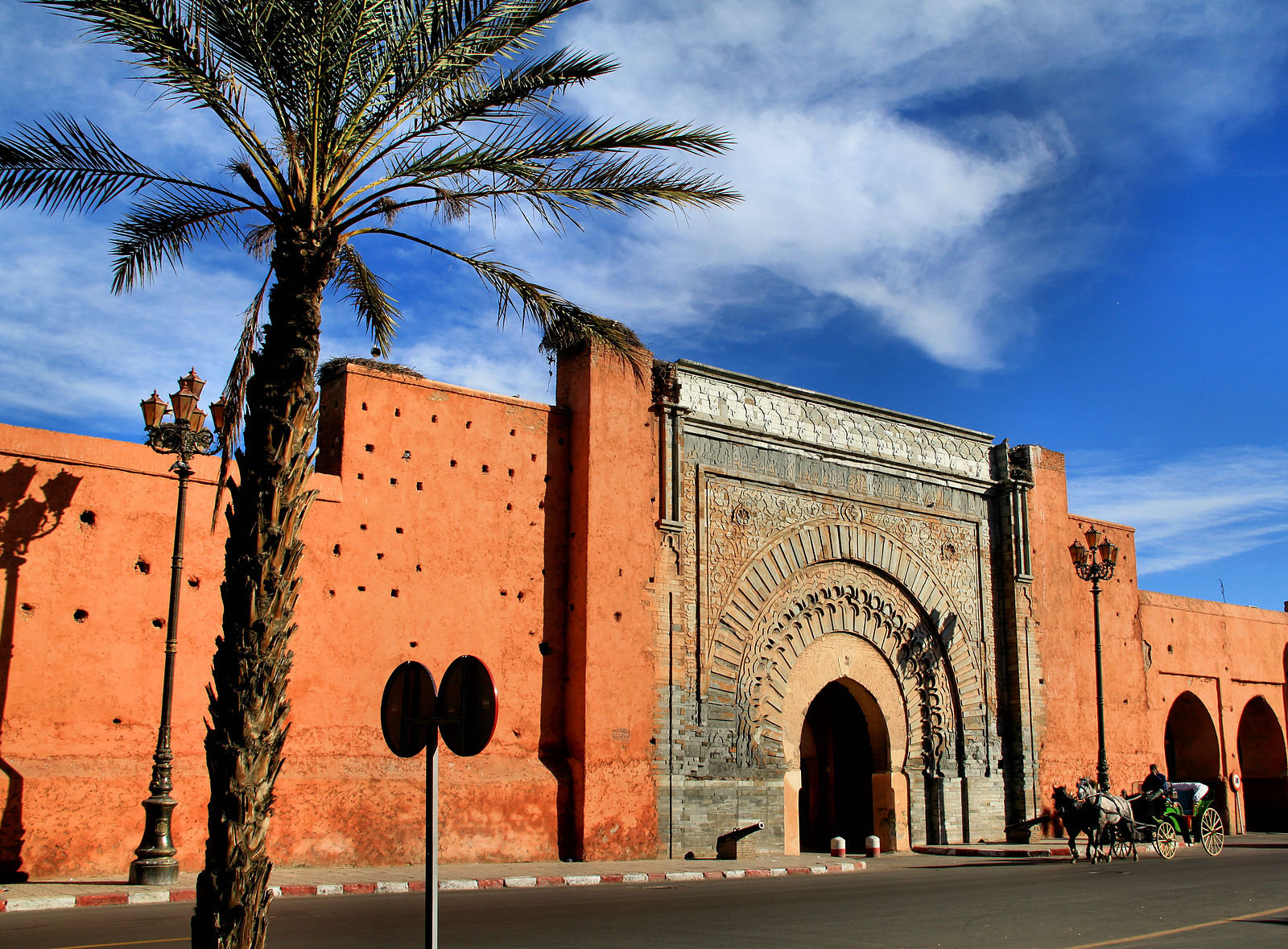 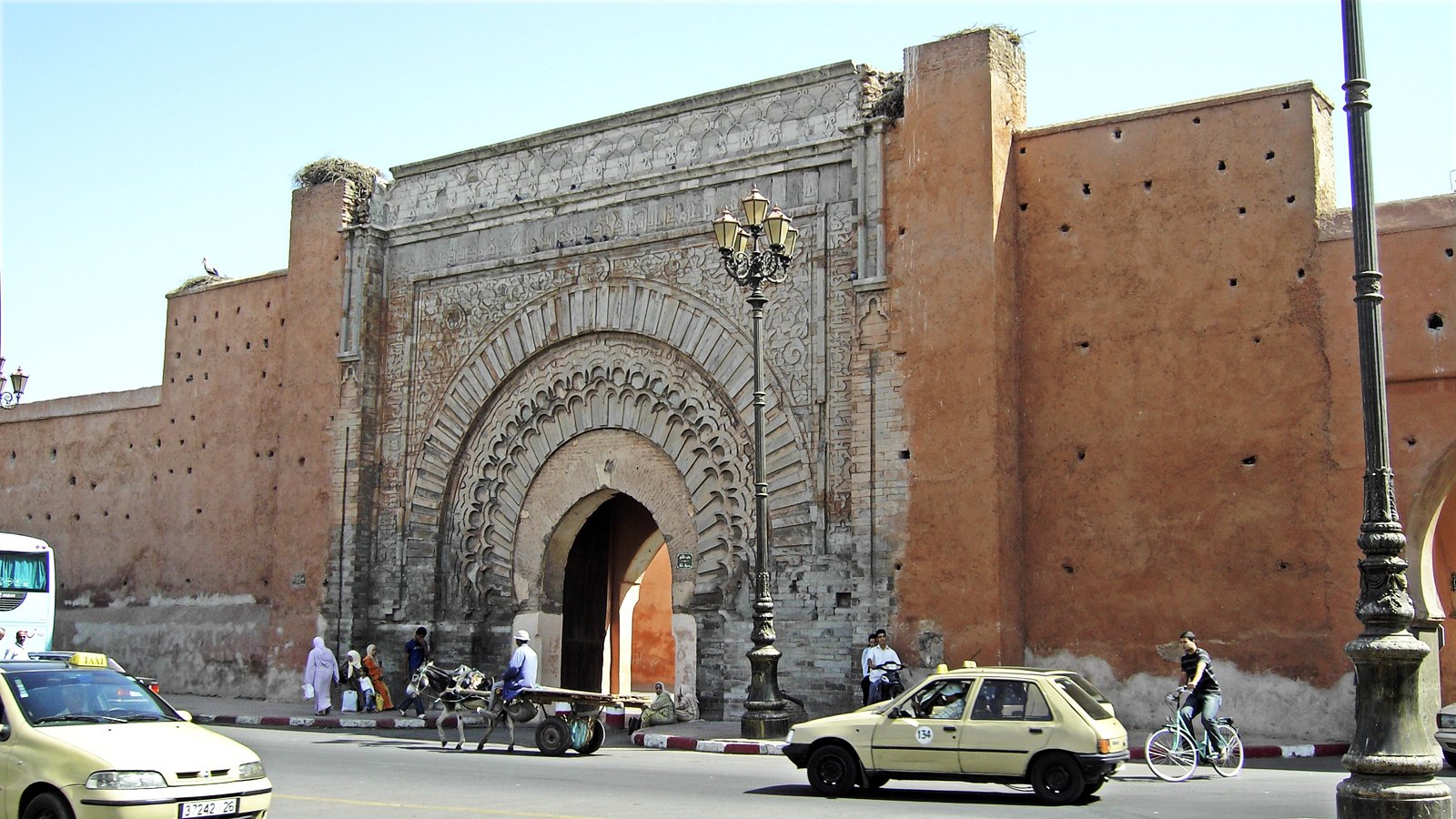 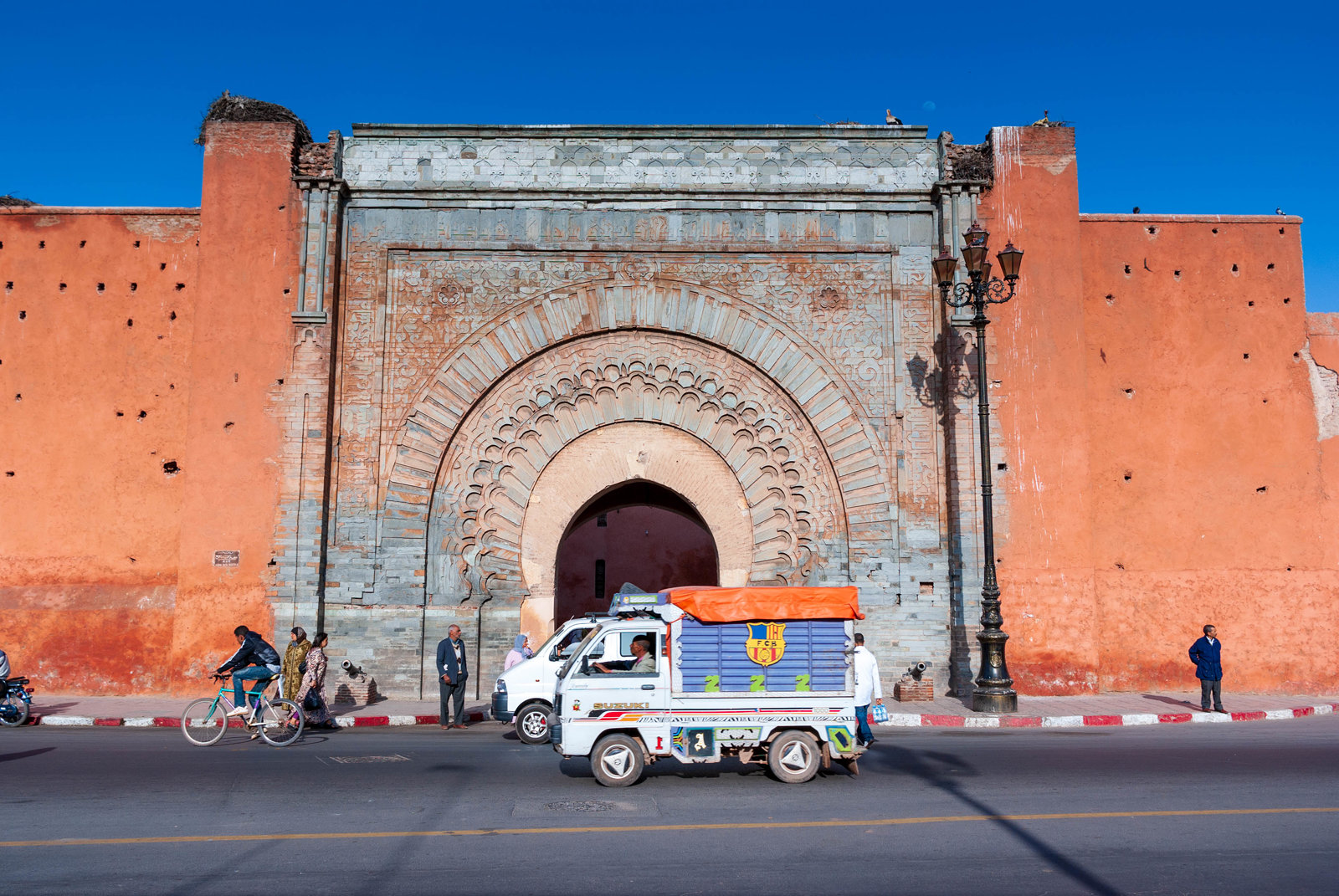 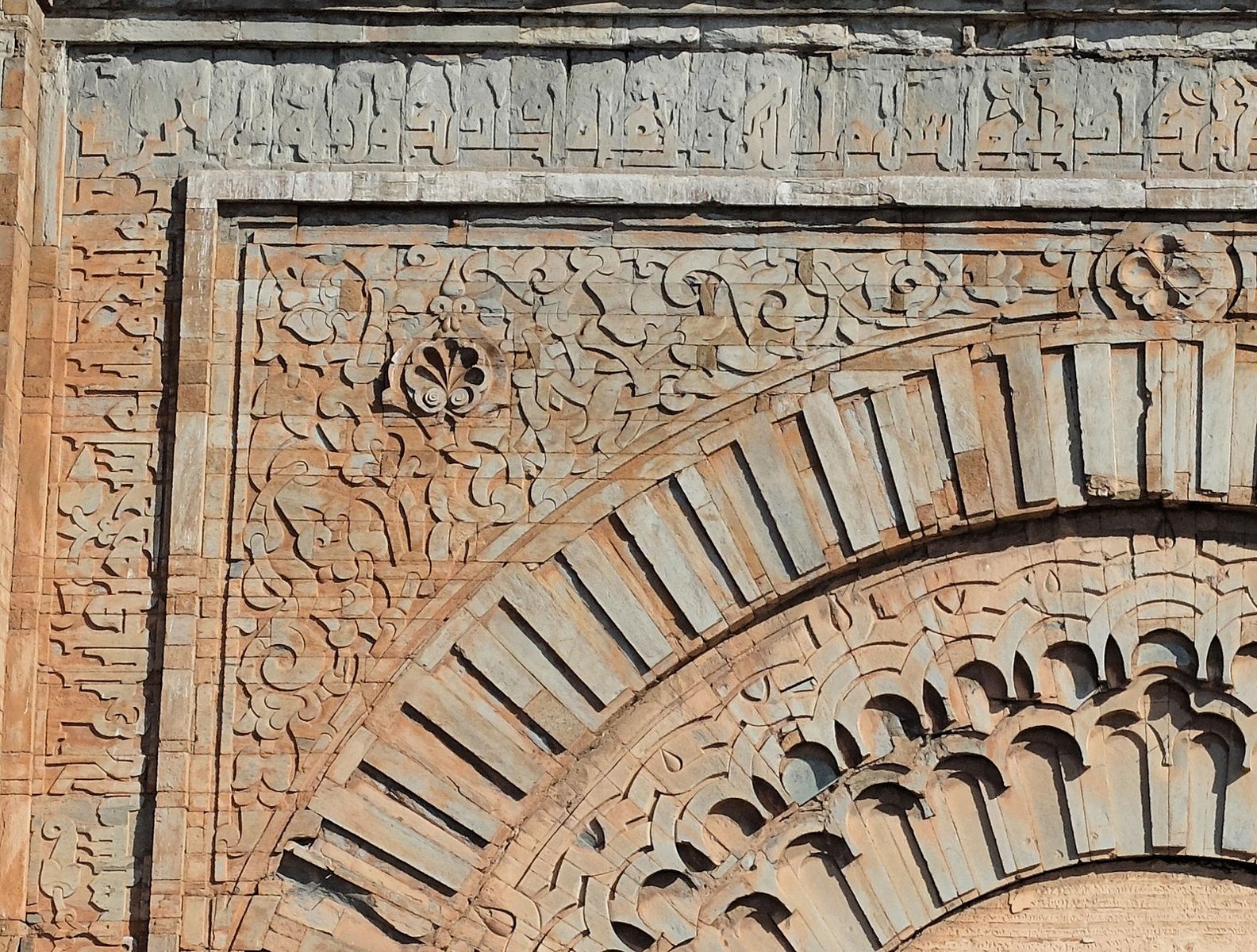 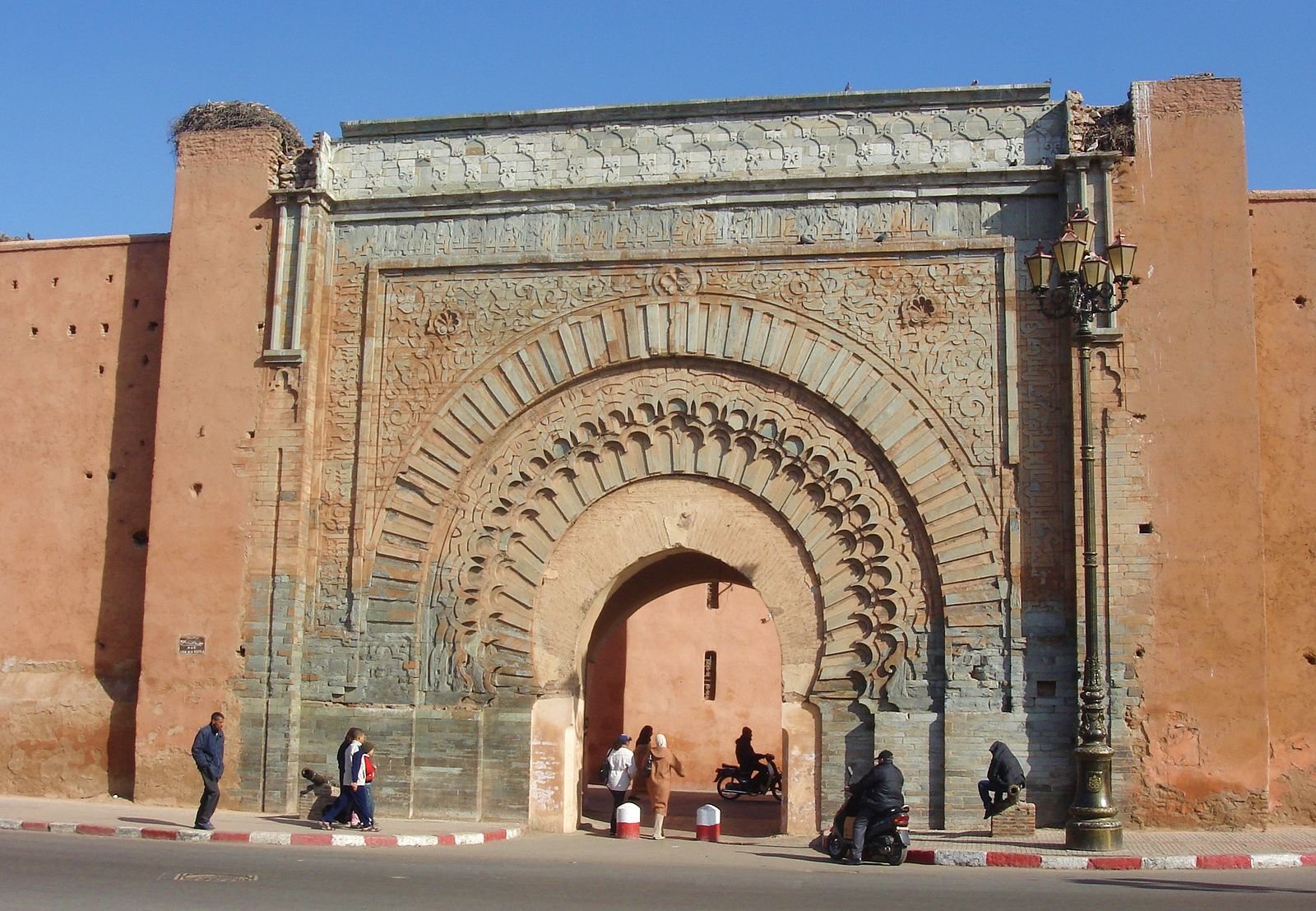 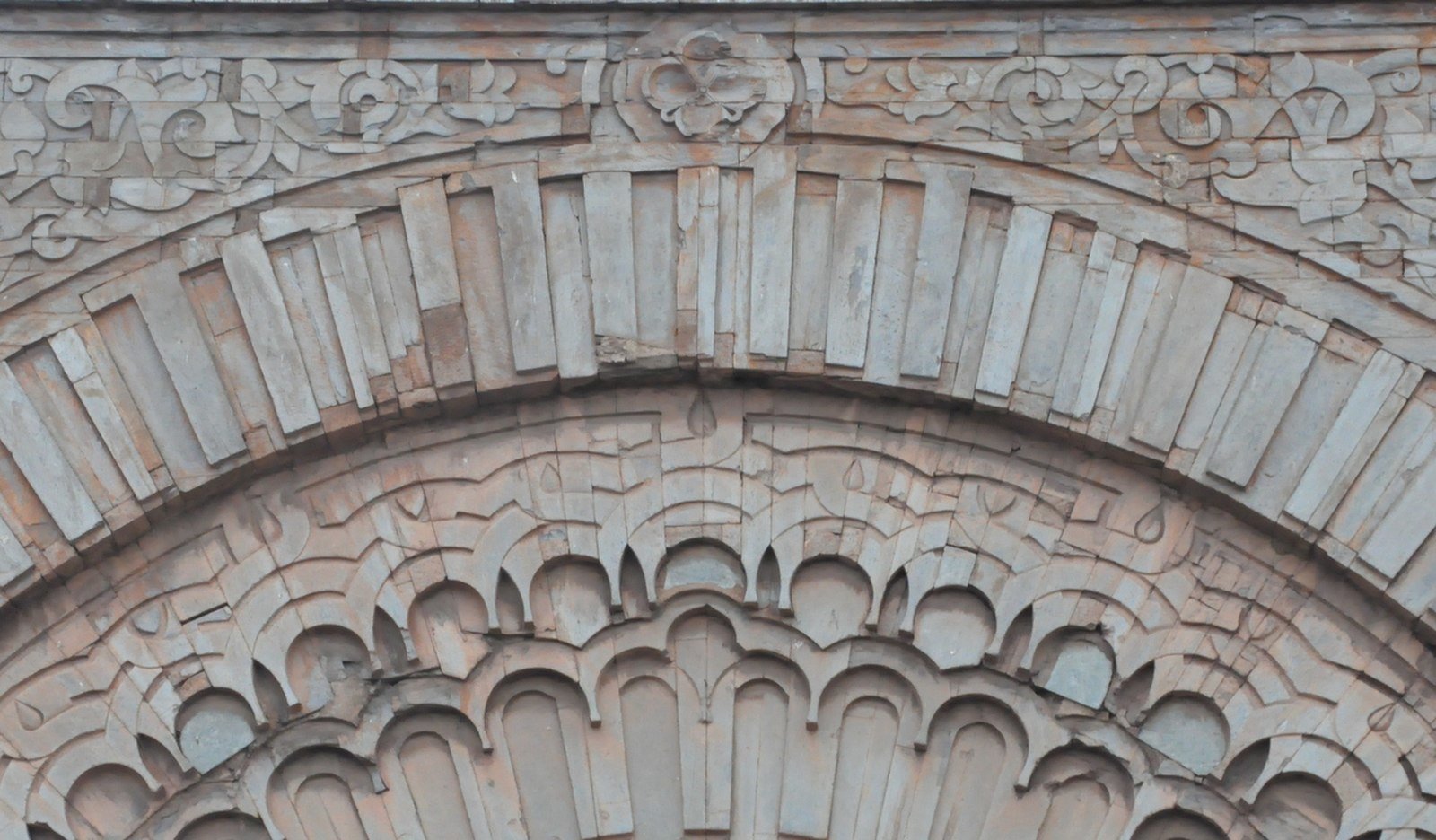 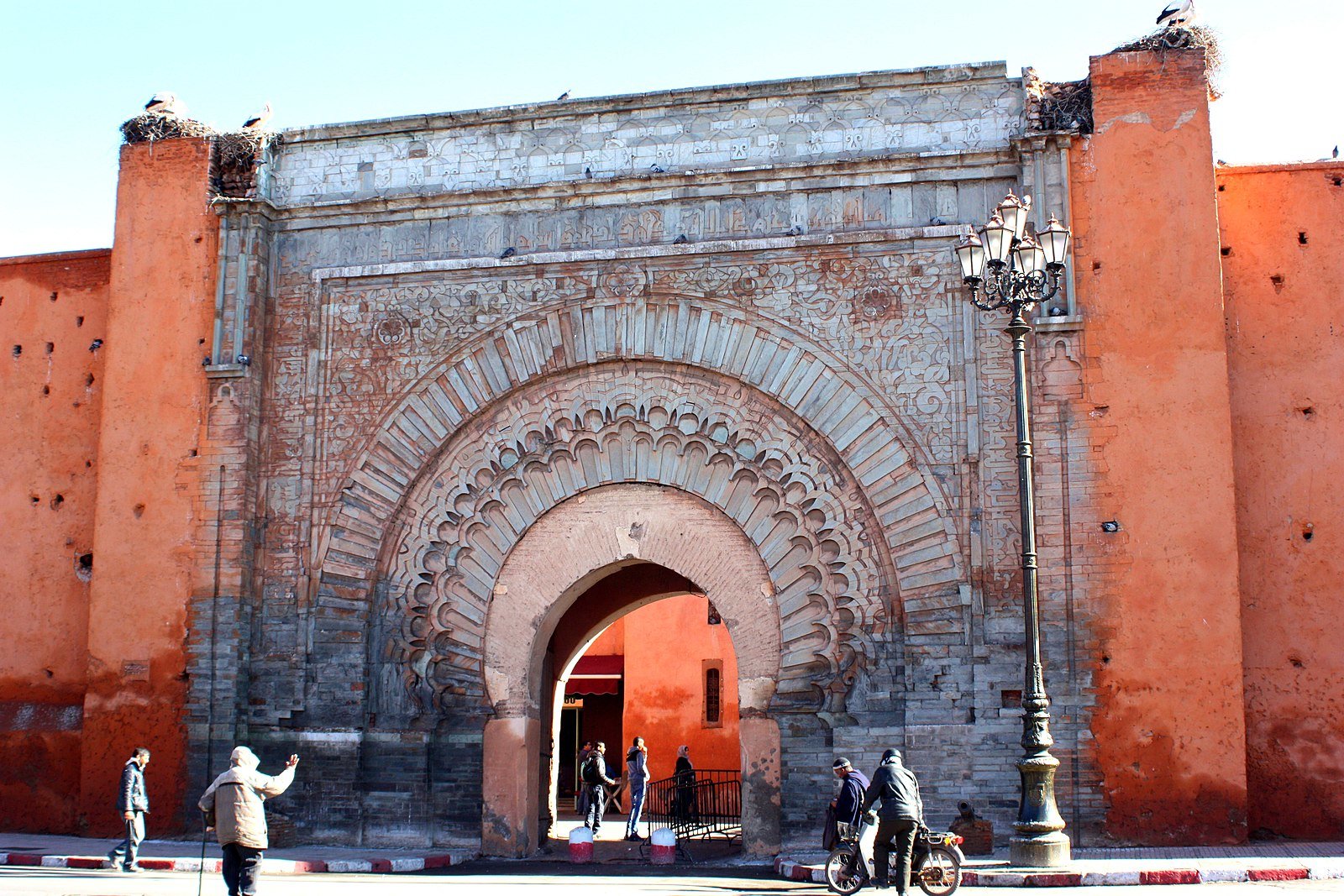 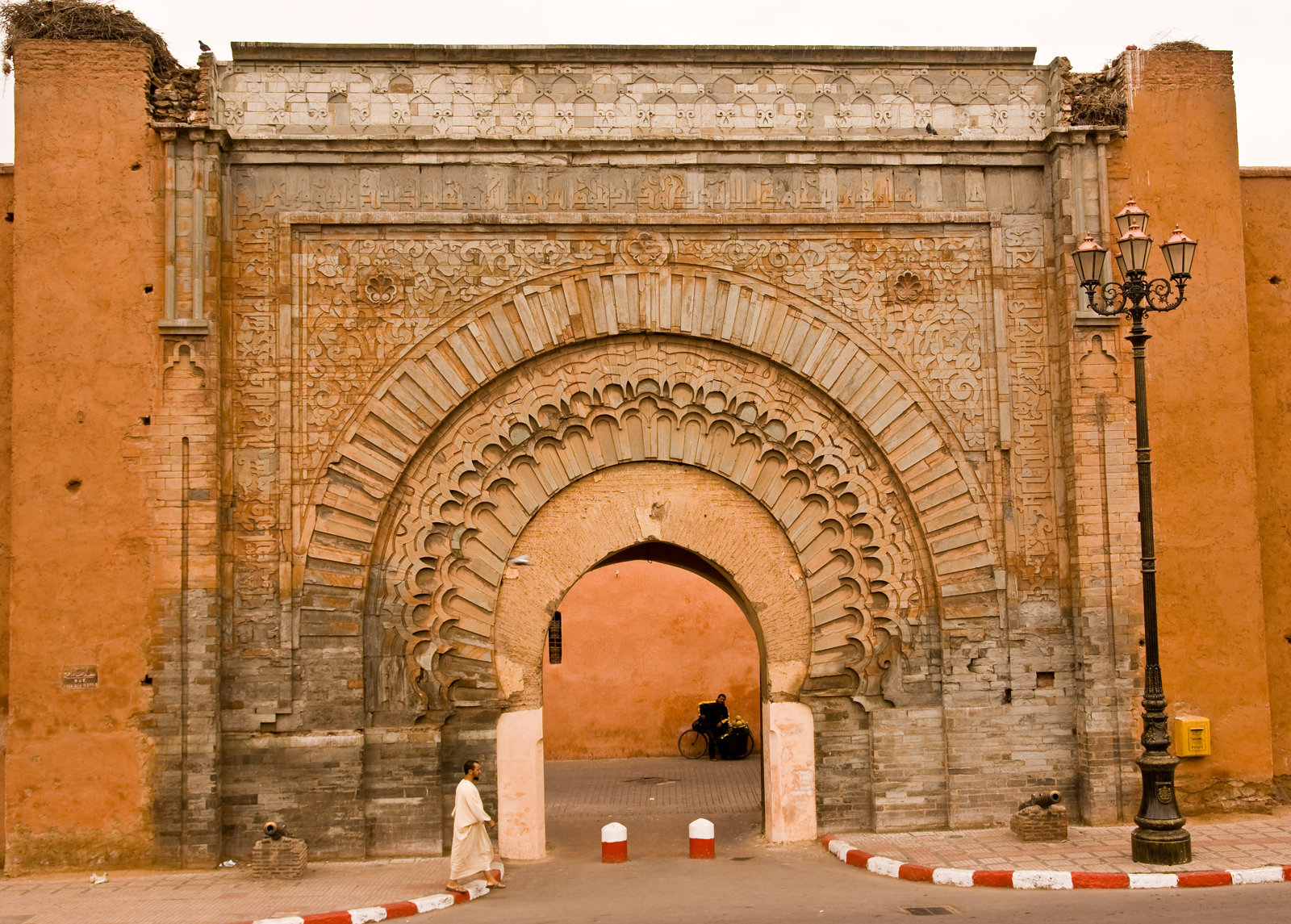 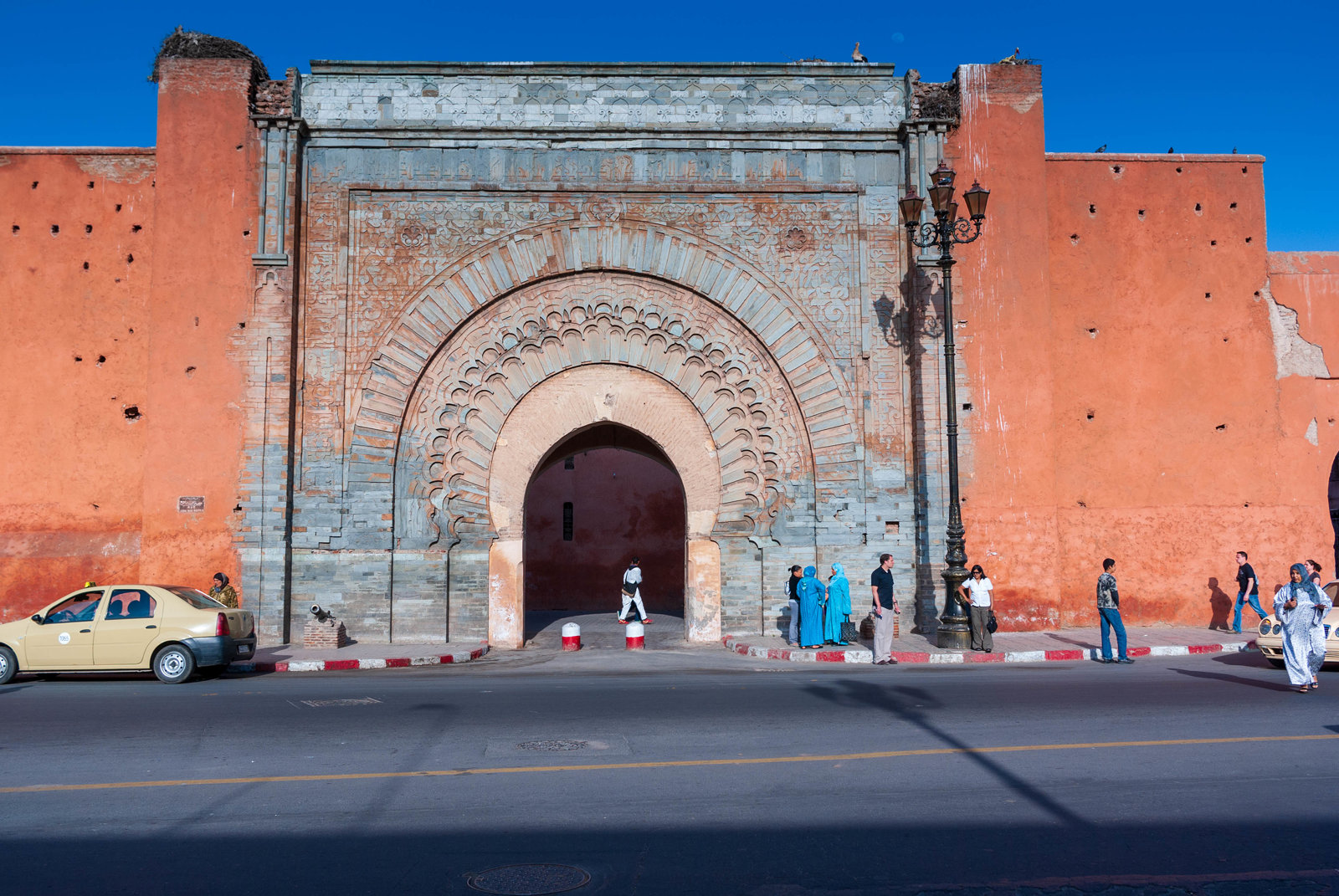 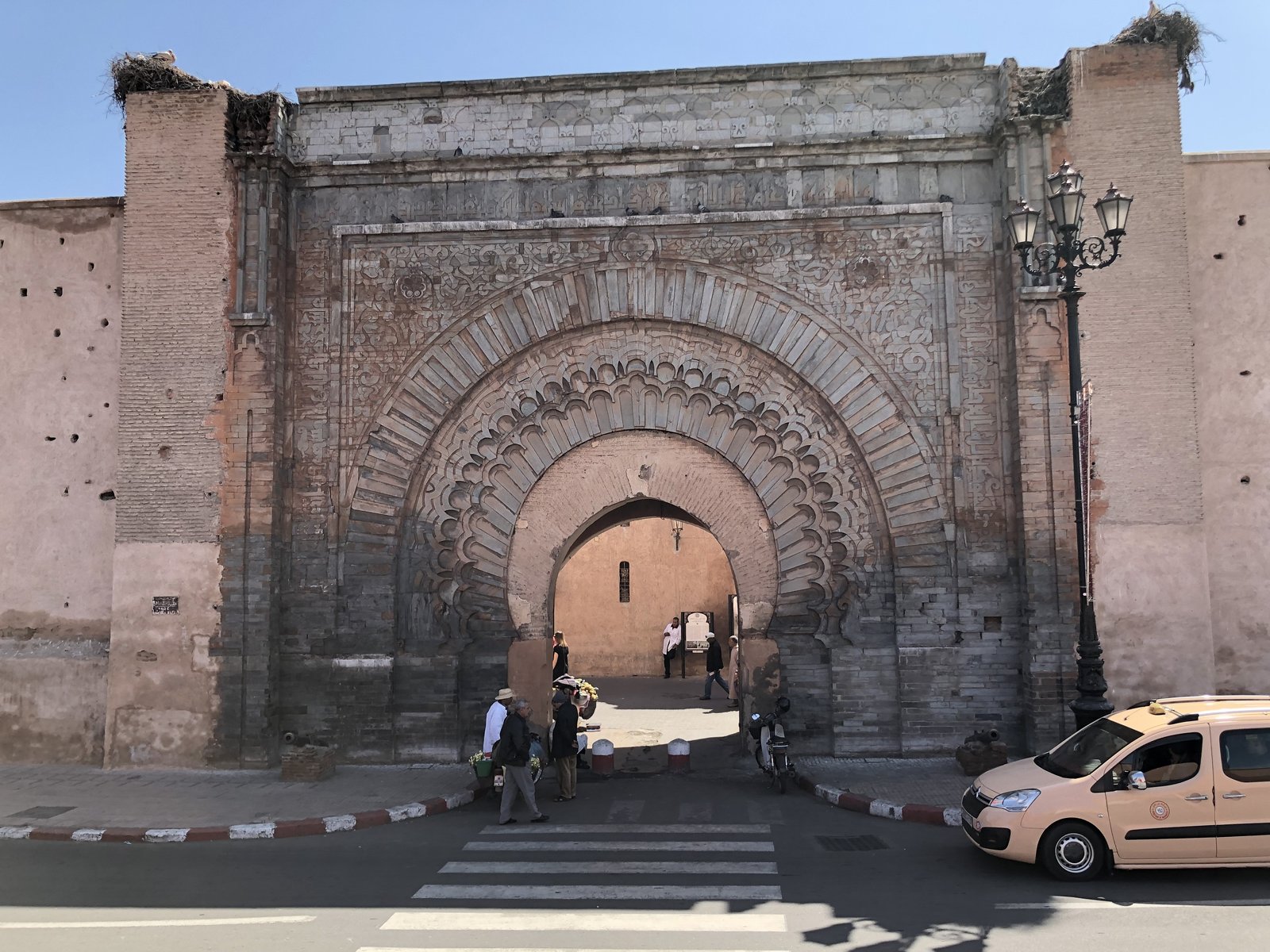 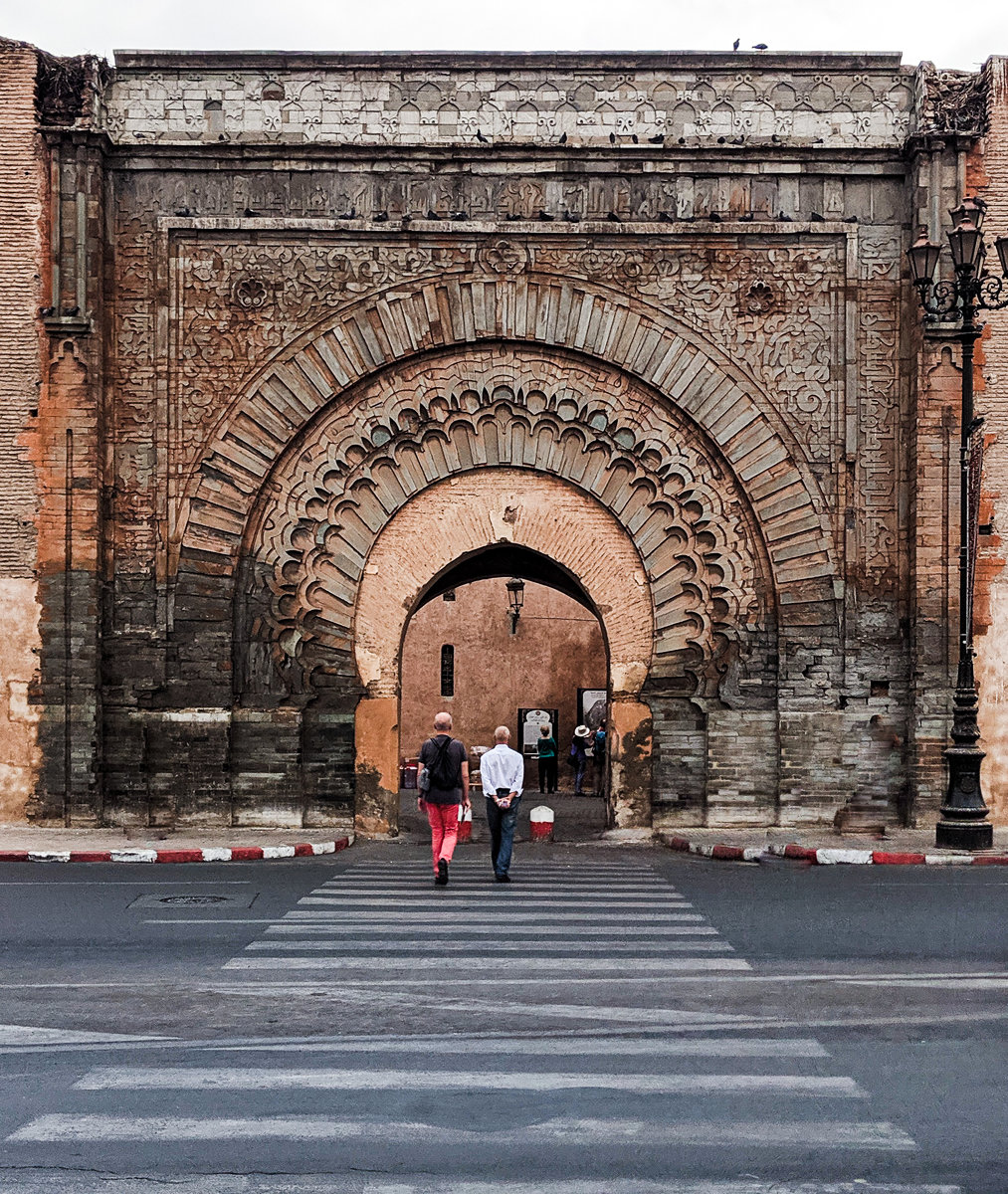 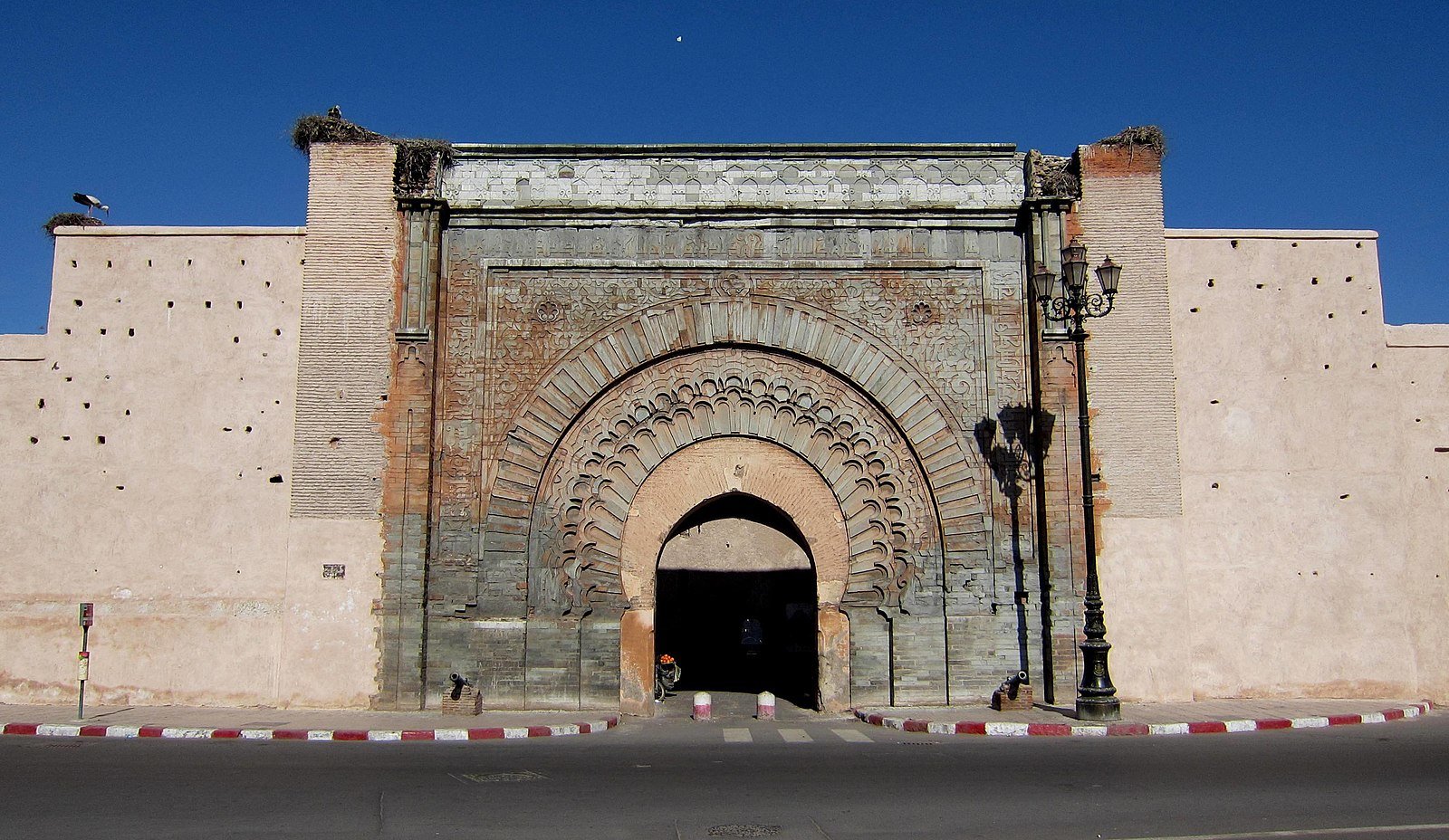 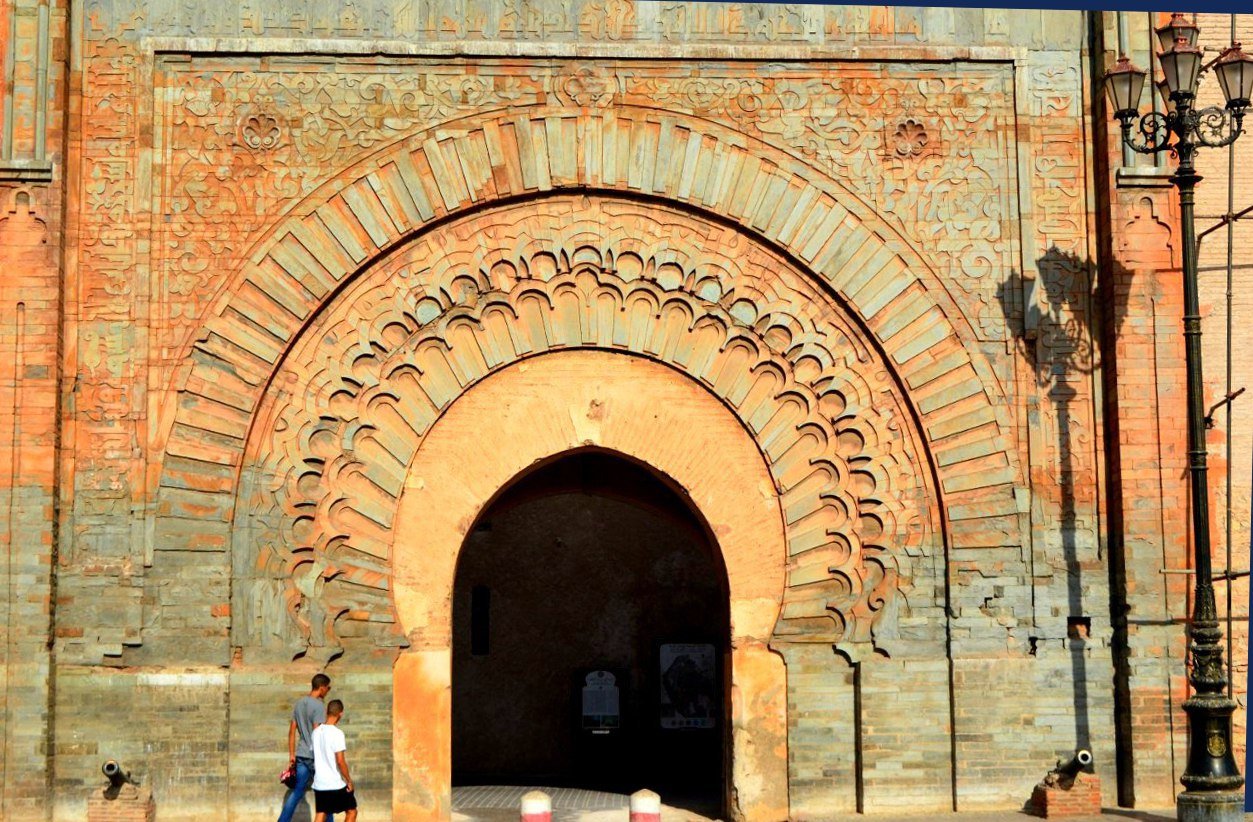 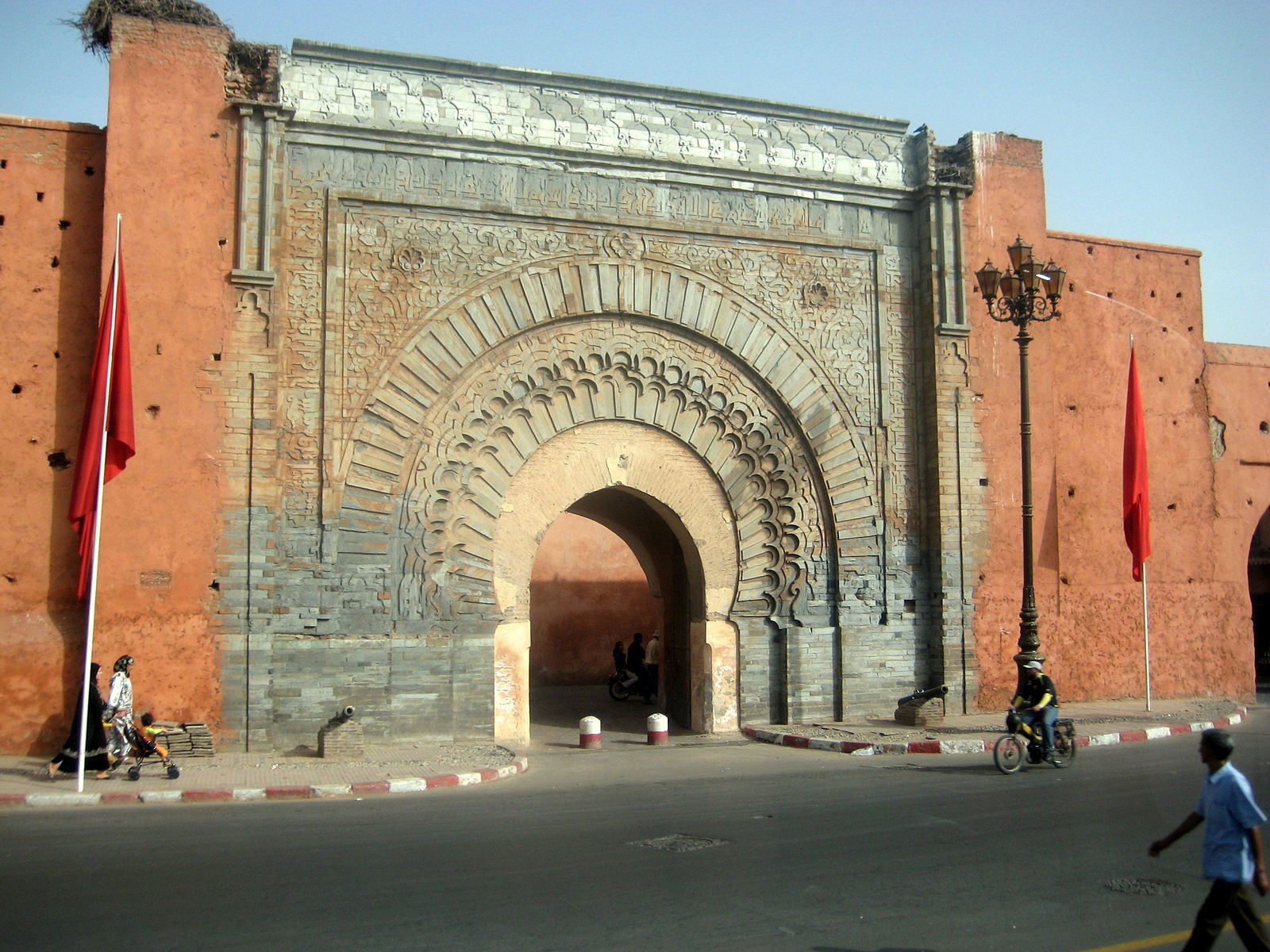 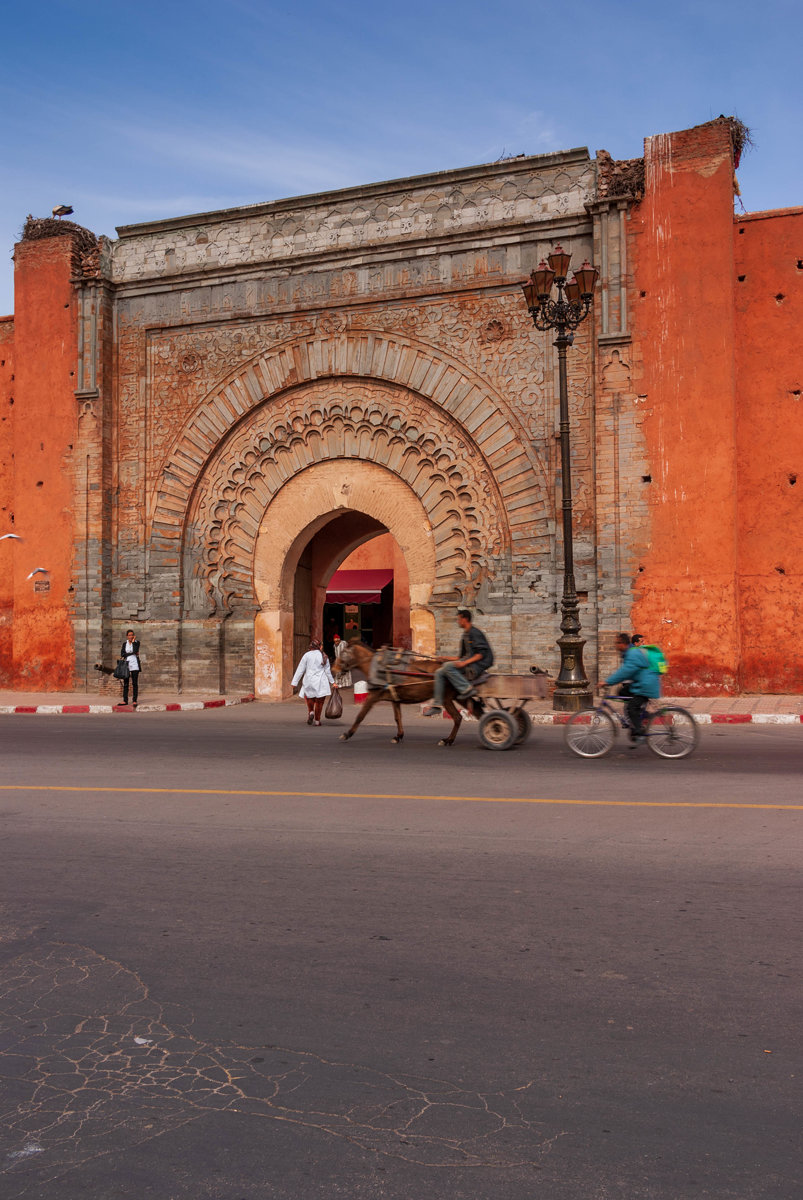 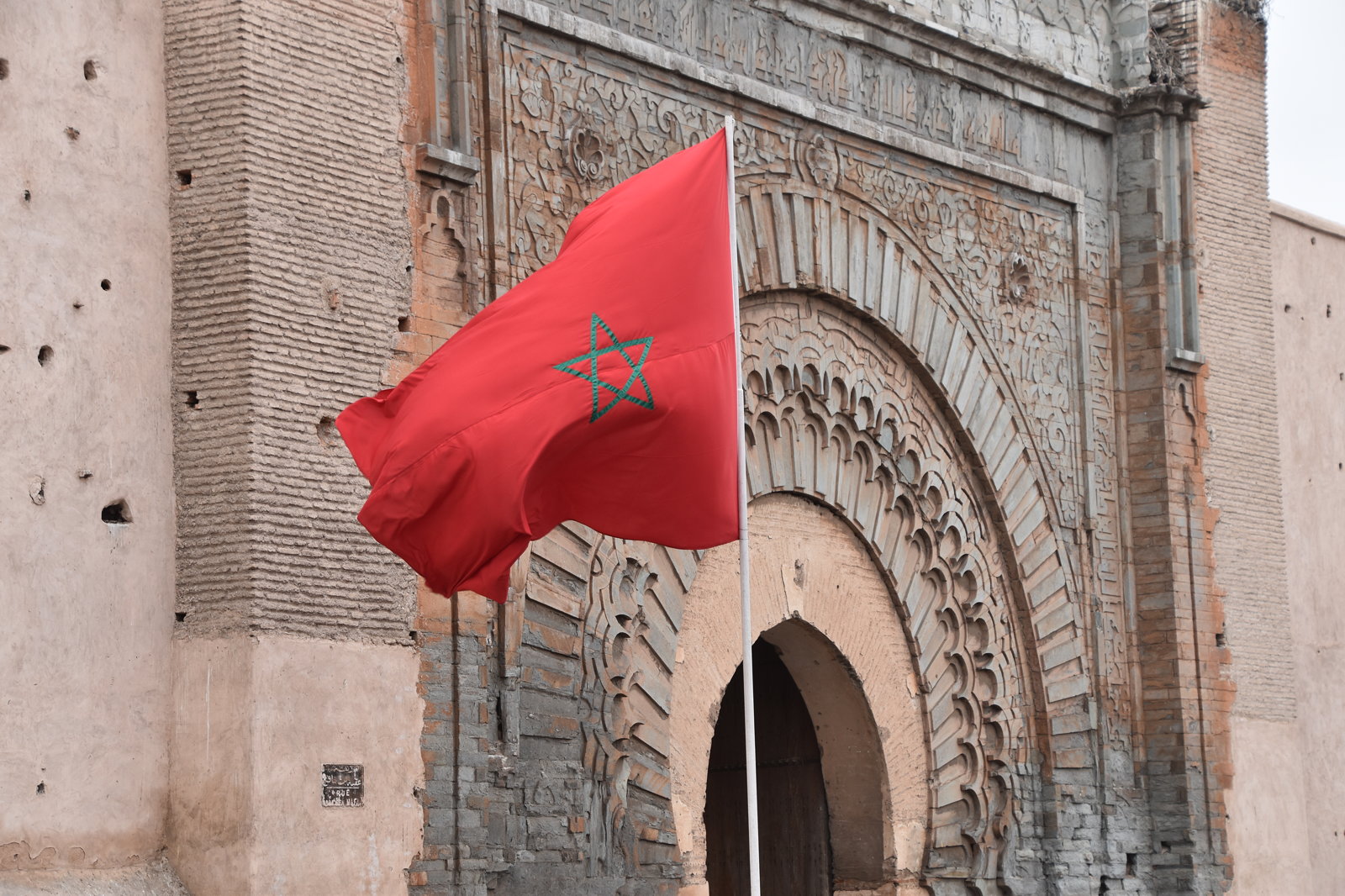 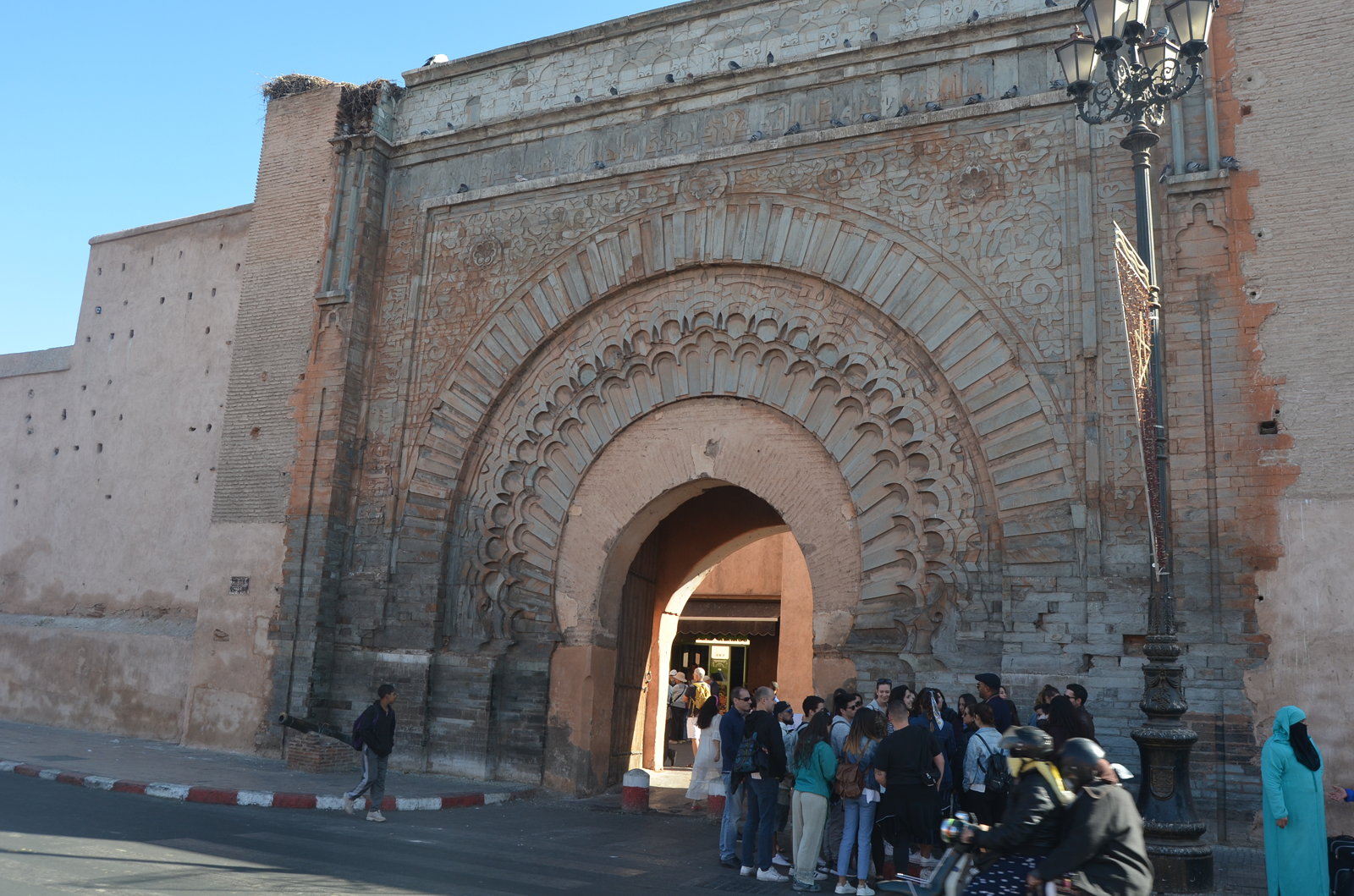 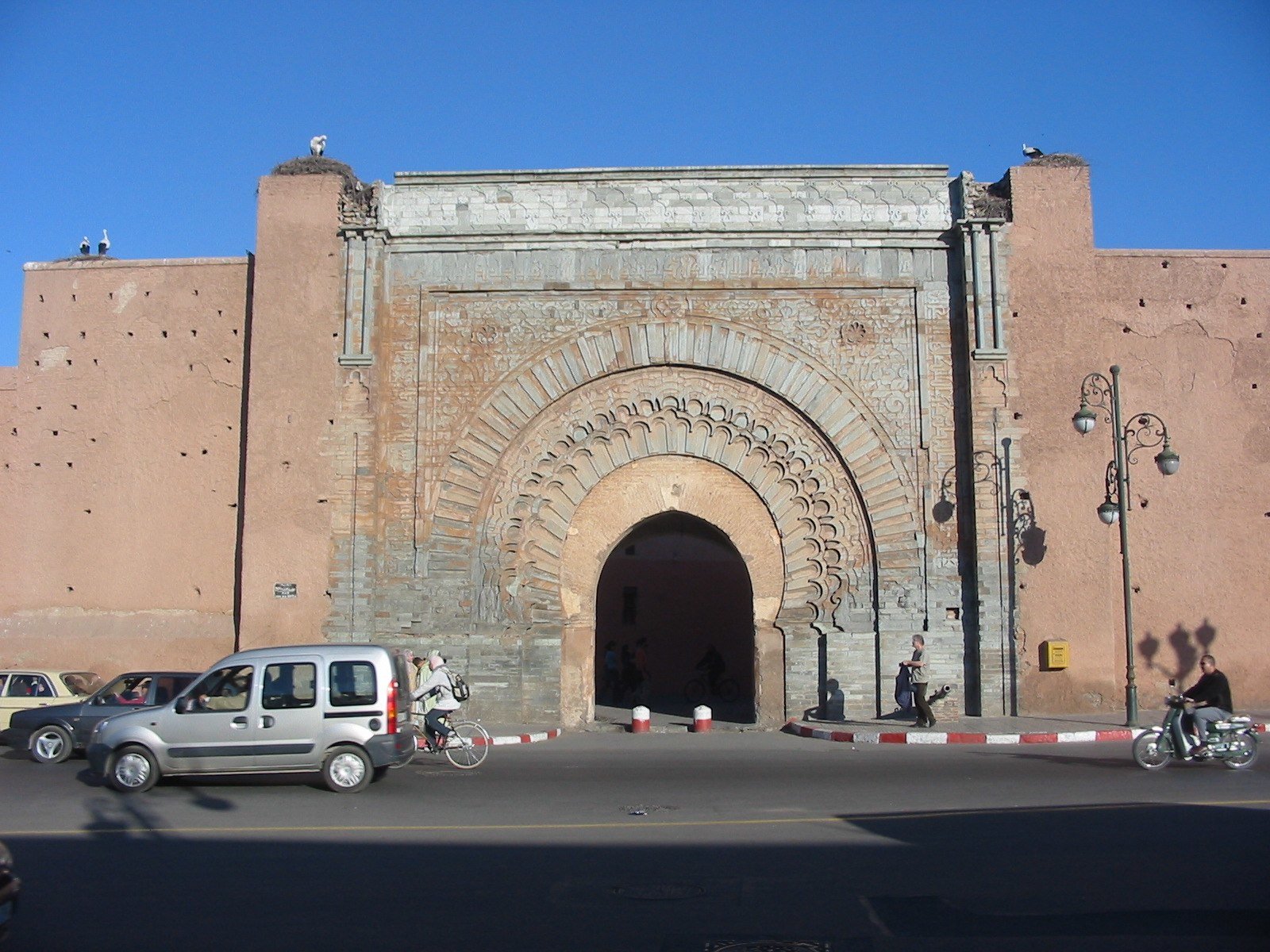 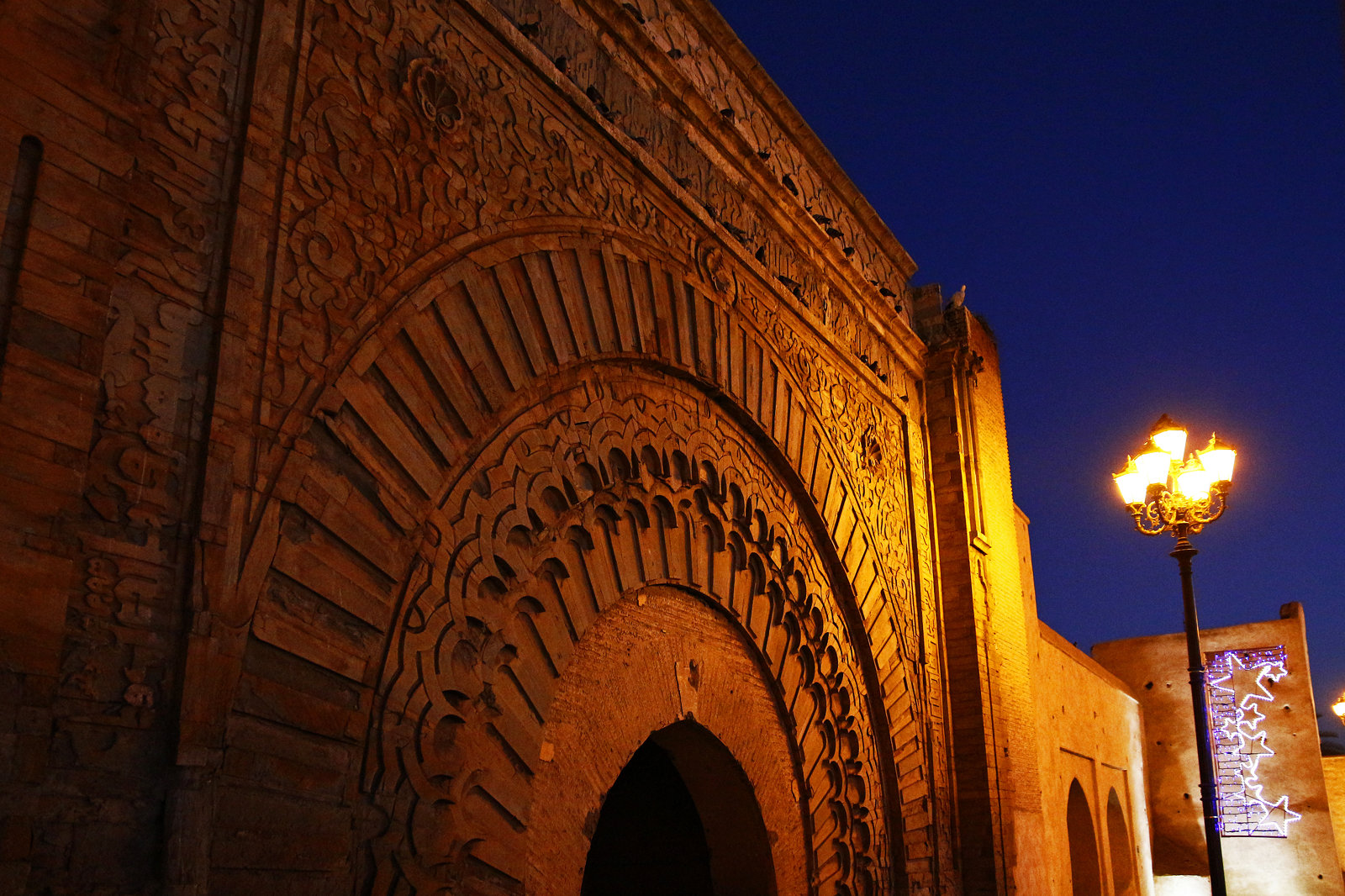 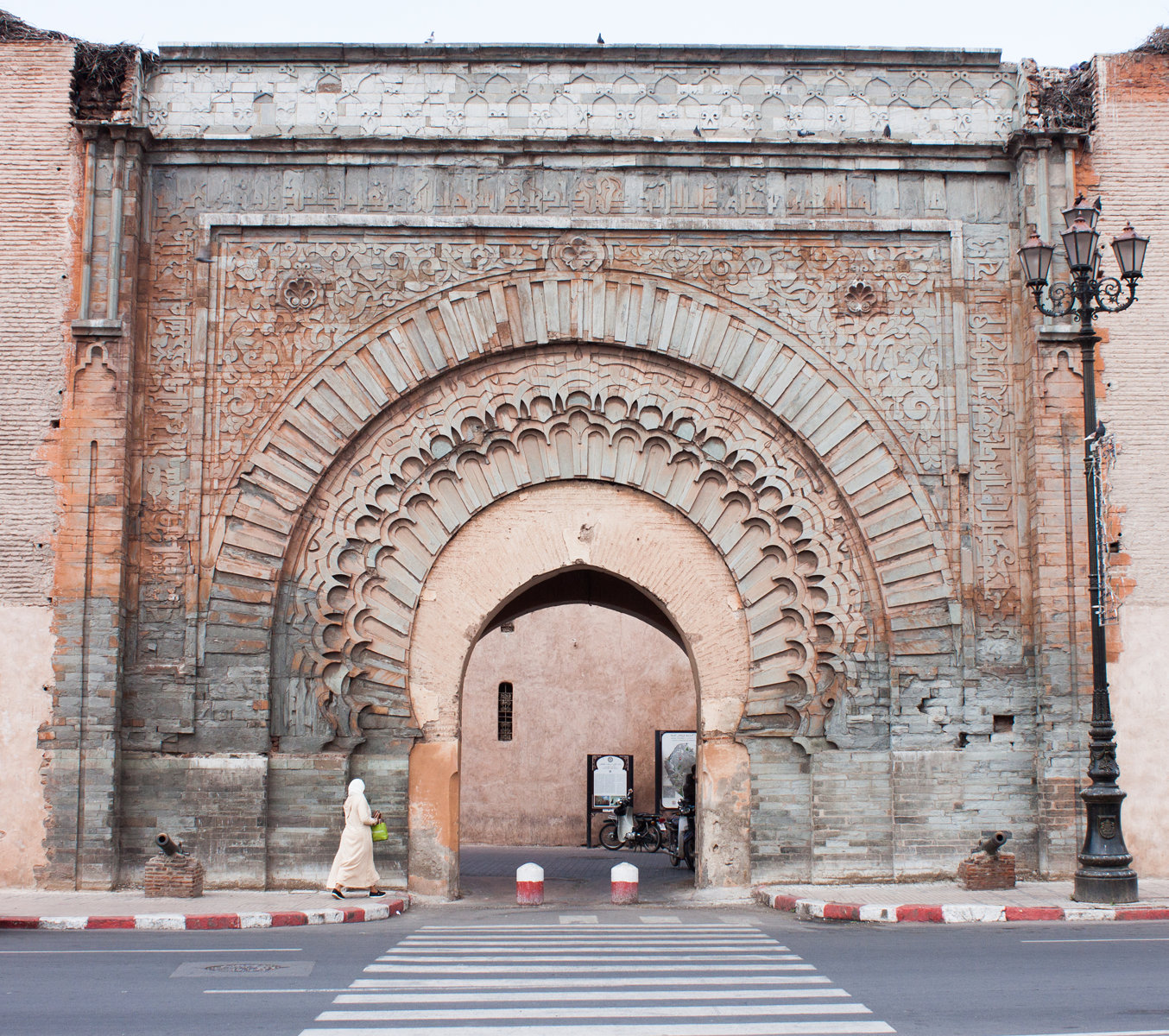