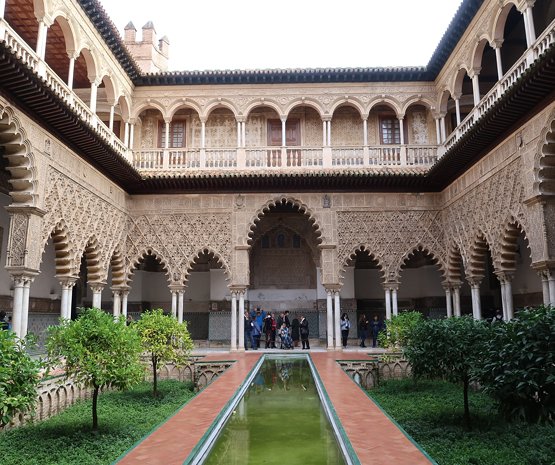 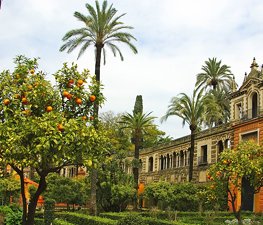 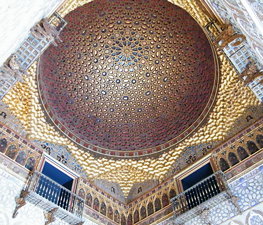 The Alcázar of Seville (Spanish "Alcázares Reales de Sevilla" or "Royal Alcazars of Seville") is a royal palace in Seville, Spain. Originally a Moorish fort, the Alcázar (from the Arabic القصر, al-qasr, meaning "palace"). The Almohades were the first to build a palace, which was called Al-Muwarak, on the site of the modern day Alcázar. The palace is one of the best remaining examples of mudéjar architecture. Subsequent monarchs have added their own additions to the Alcázar. The upper levels of the Alcázar are still used by the royal family as the official Seville residence and are administered by the Patrimonio Nacional.

Sections of the Alcázar

The English name for this section is "The Courtyard of the Maidens." The name refers to the legend that the Moors demanded 100 virgins every year as tribute from Christian kingdoms in Iberia. The story of the tribute may have been used as a myth to bolster the Reconquista movement, but it may have had some truth to it in the sexual abuse of Christian women by powerful Moors.[1]

The lower level of the Patio was built for Pedro I and includes inscriptions describing Pedro as a "sultan." Various lavish reception rooms are located on the sides of the Patio. In the center is a large, rectangular reflecting pool with sunken gardens on either side. For many years, the courtyard was entirely paved in marble with a fountain in the center. However, historical evidence showed the gardens and the reflecting pool were the original design and this arrangement was restored. However, soon after this restoration, the courtyard was temporarily paved with marble once again at the request of movie director Ridley Scott. Scott used the paved courtyard as the set for the court of the King of Jerusalem in his movie Kingdom of Heaven. The courtyard arrangement was converted once more after the movie's production.

The upper story of the Patio was an addition made by Charles V. The addition was designed by Luis de Vega in the style of the Italian Renaissance although he did include both Renaissance and mudéjar plaster work in the decorations. Construction of the addition began in 1540 and ended in 1572.

The "Baths of Lady María de Padilla" are rainwater tanks beneath the Patio del Crucero. The tanks are named after María de Padilla, the mistress of Pedro the Cruel. Supposedly, Pedro fell for María and had her husband killed. María resisted his advances and poured boiling oil over her face to disfigure herself to stop Pedro's pursuit. She became a nun and moved to a convent afterwards. She is regarded as a symbol of purity in the culture of Seville.

The Casa de Contratación (House of Trade) lies off the la Monteria. It was built in 1503 by the Spanish Monarchs to regulate trade with the New World colonies. The Casa dealt with trade related legal disputes on trade with the Americas. The "Casa" includes a chapel where the Colombus met with Ferdinand and Isabella after his second voyage.

Nanne van Hout
A must see for sure! Especially the gardens with the hundreds of palm trees and flowers. If you thinks it's too hot to visit: there's a lot of shadow. Entrance is just €2 euro for students.

Katy Zack
Words cannot describe the beauty of the architecture and gardens of this palace. Enjoy the mix of Muslim and Christian architecture from the 14-16th centuries and amazing tile work.

Jeff Melnyk
Absolutely incredible. I could have stayed all day! So much history and opulence packed into one visit. Must do.

Ben Mackey
If you want to avoid the tour groups and hordes of tourists, go when it opens or later in the afternoon. We spent 4 hours here - including a relaxed lunch at the cafe in the gardens.

Guido Gybels
A must see in Seville. Whenever you think you've seen everything, there is another wing or level to explore. Book online, even on the day, it'll save having to join a long queue.
Load more comments
foursquare.com
9.0/10
Maxim Matveyko, Александр Крутиков and 134,042 more people have been here
I've been here
Add to wishlist

Royal Alcazar of Seville on Foursquare

See all hotels See all
NOVOTEL

The Giralda is the bell tower of the Cathedral of Seville in Seville,

Metropol Parasol is a wooden structure located at La Encarnación 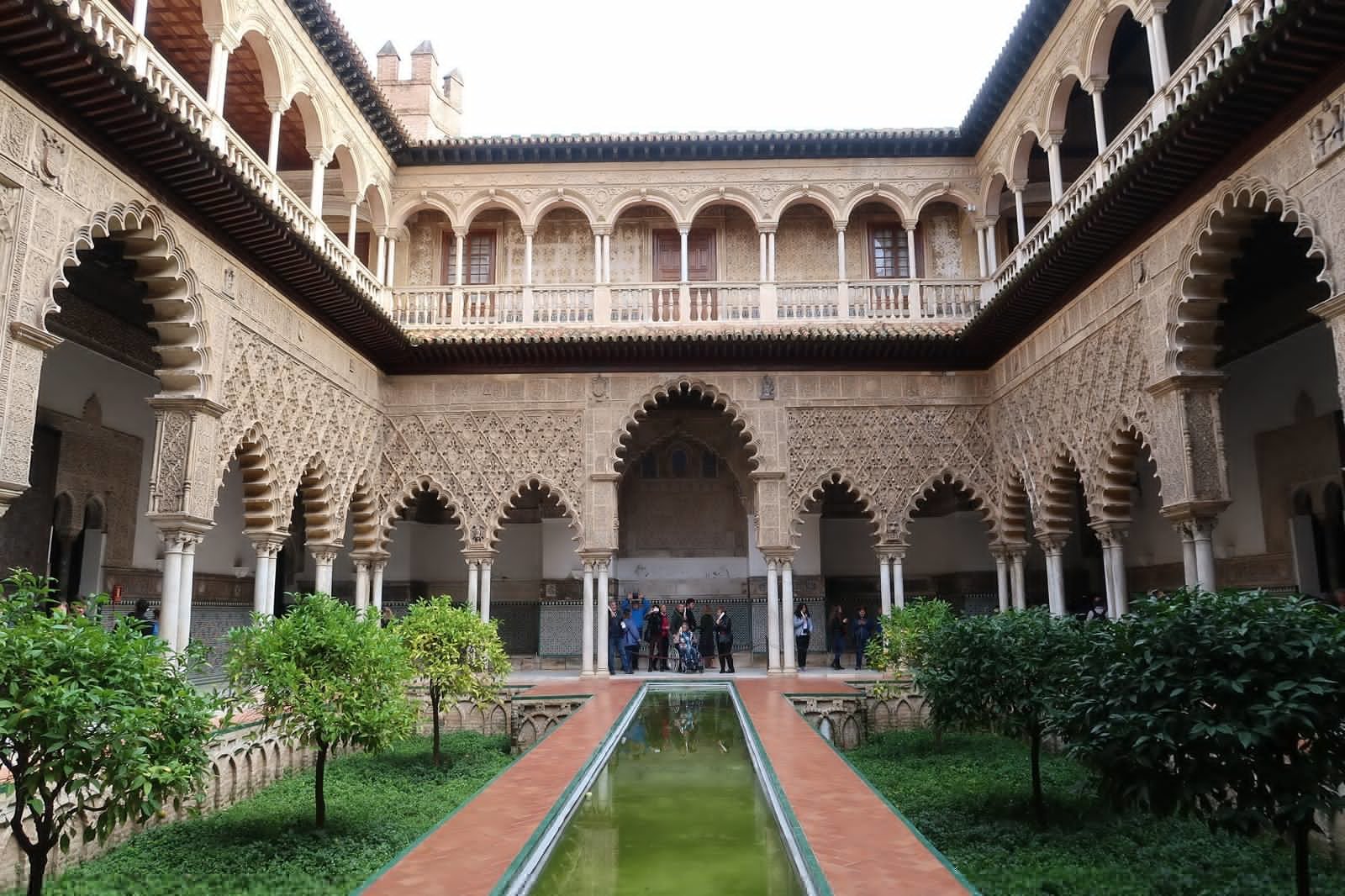 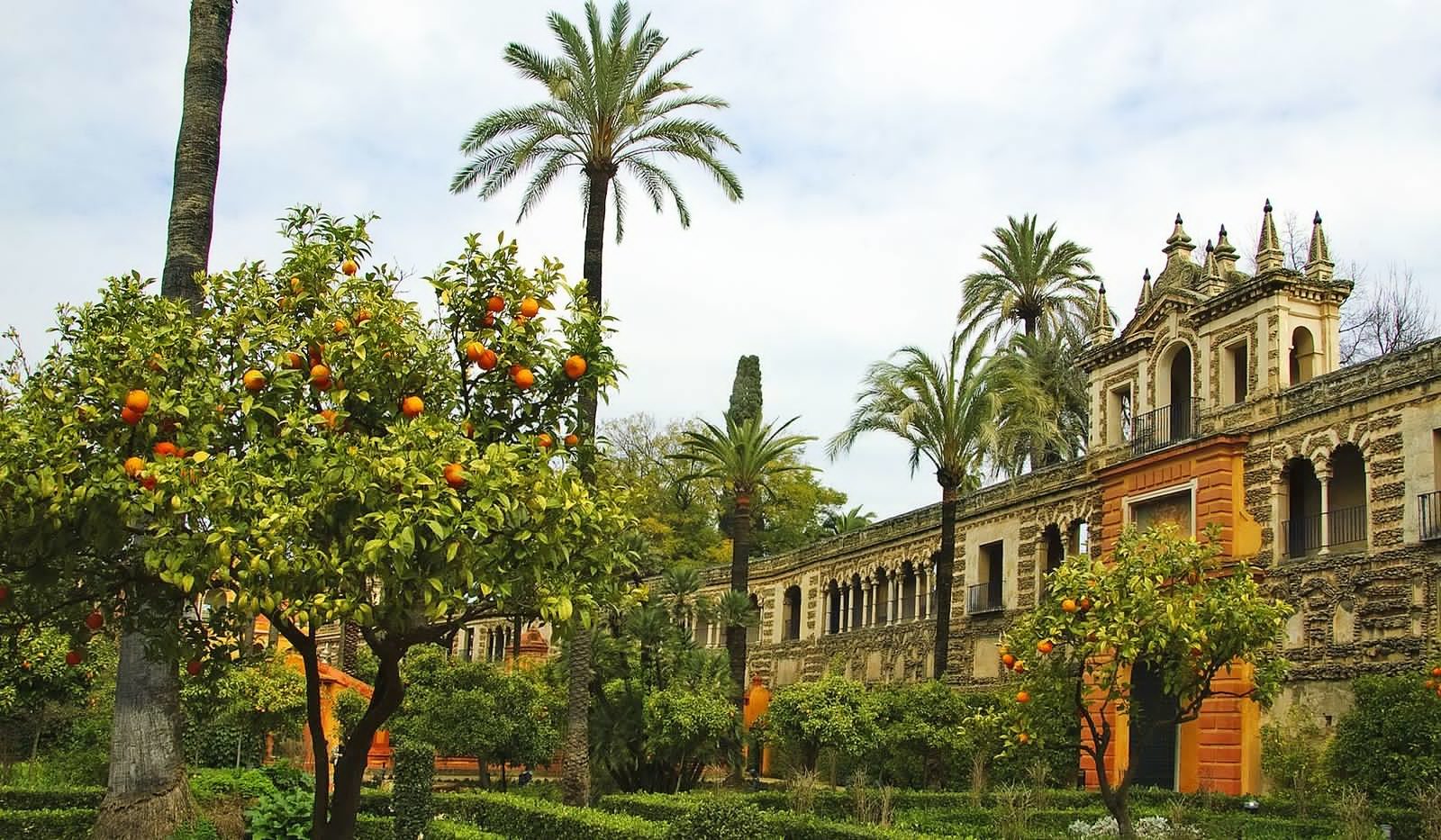 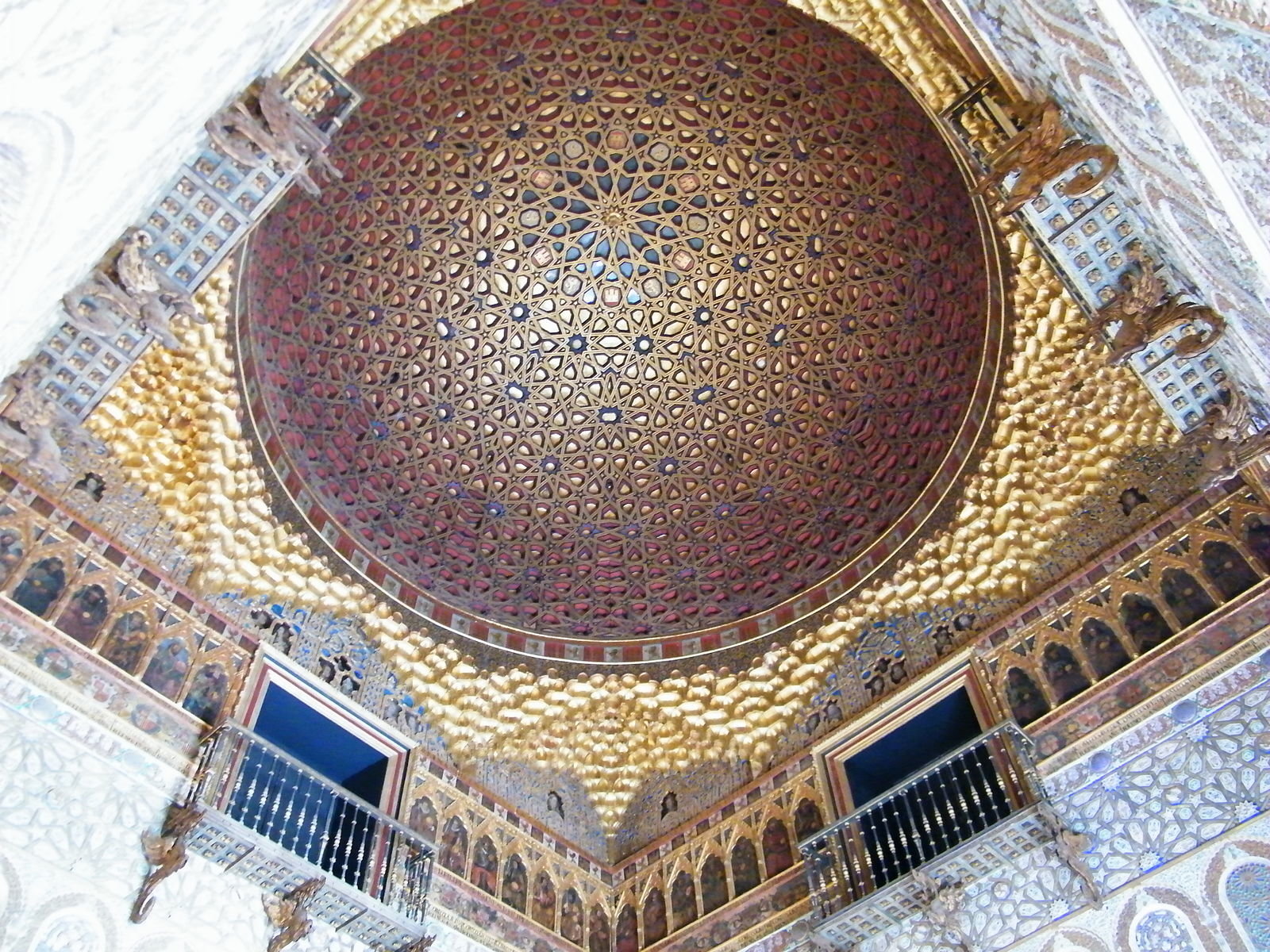 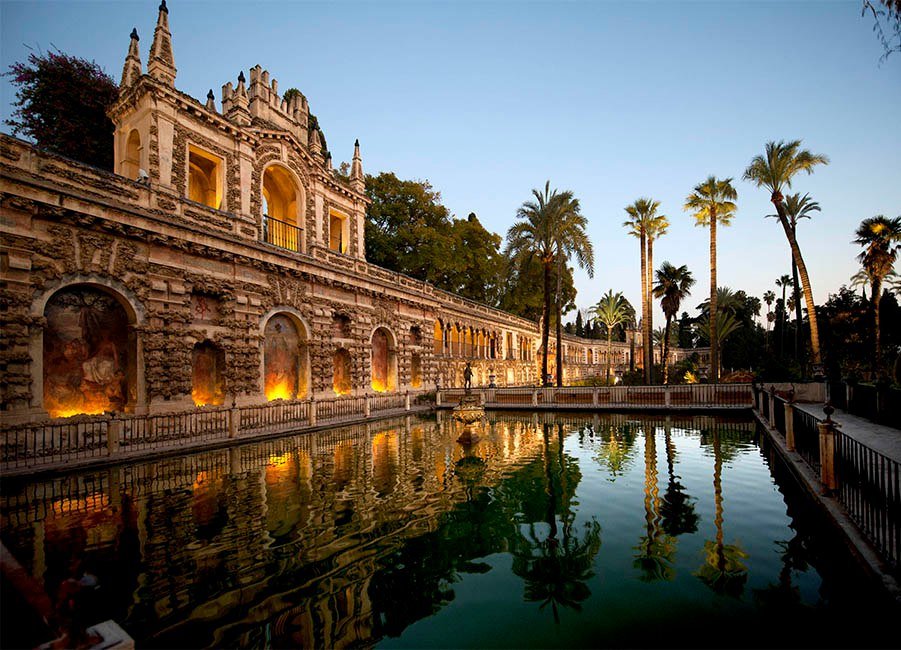 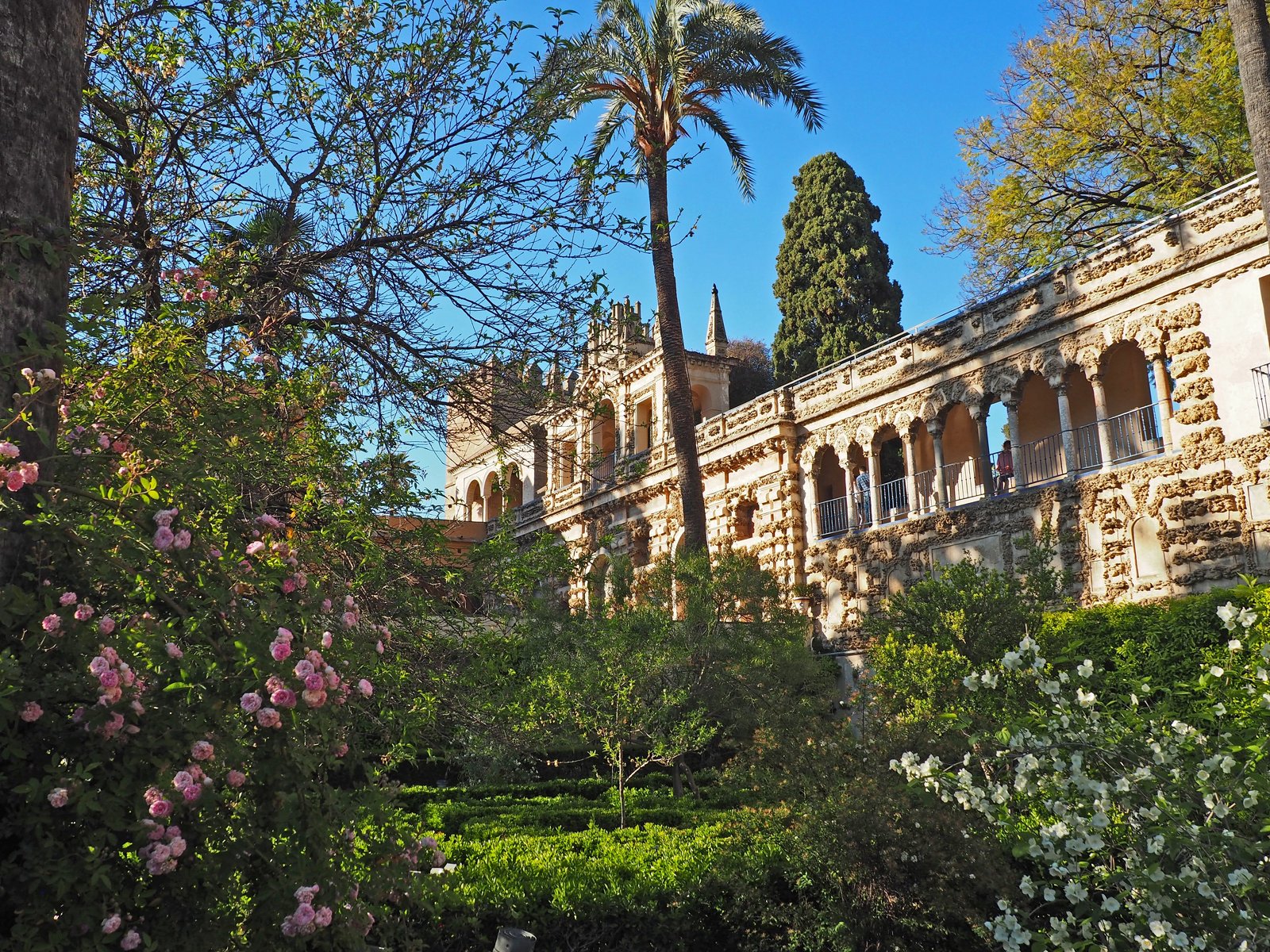 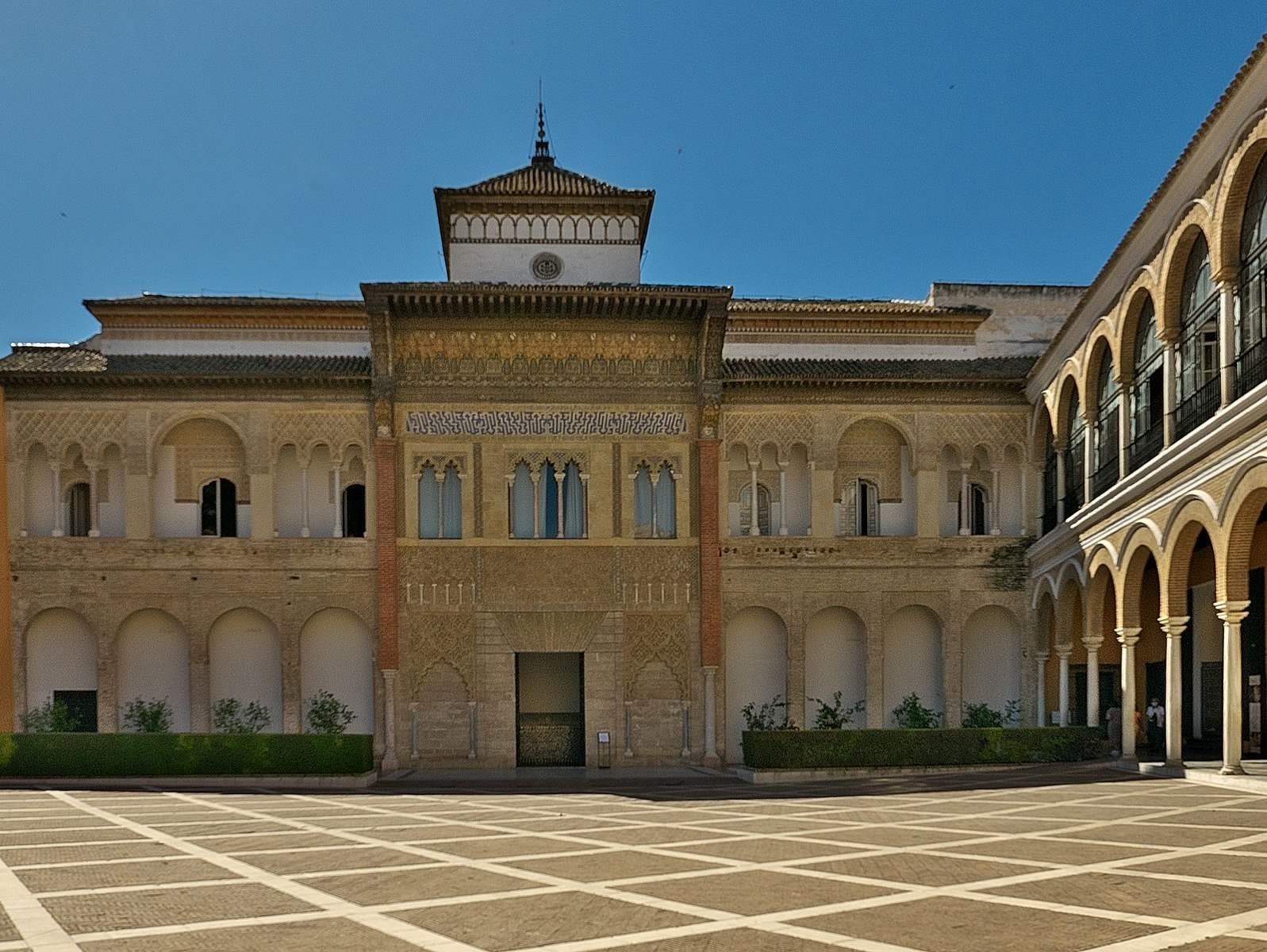 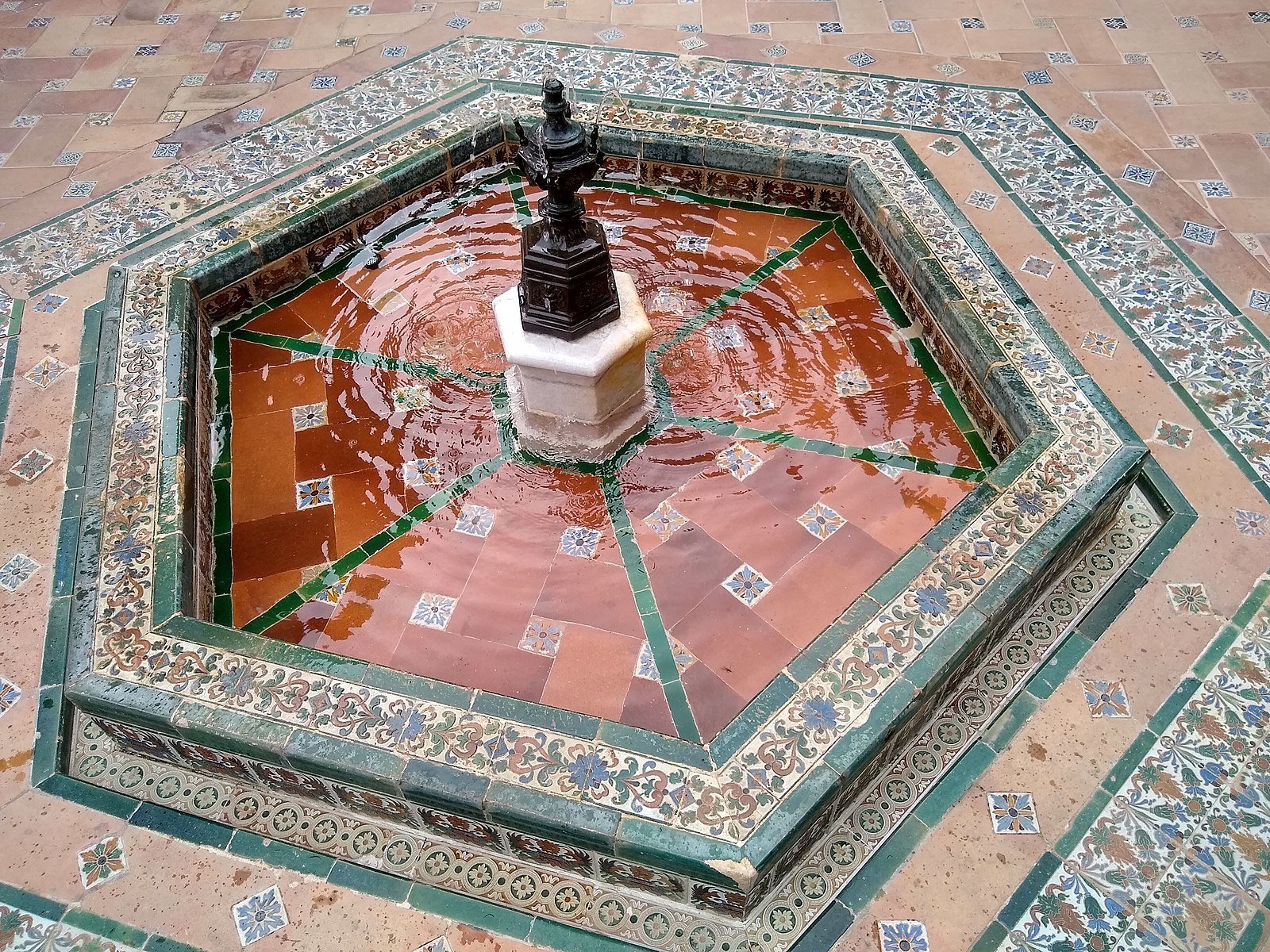 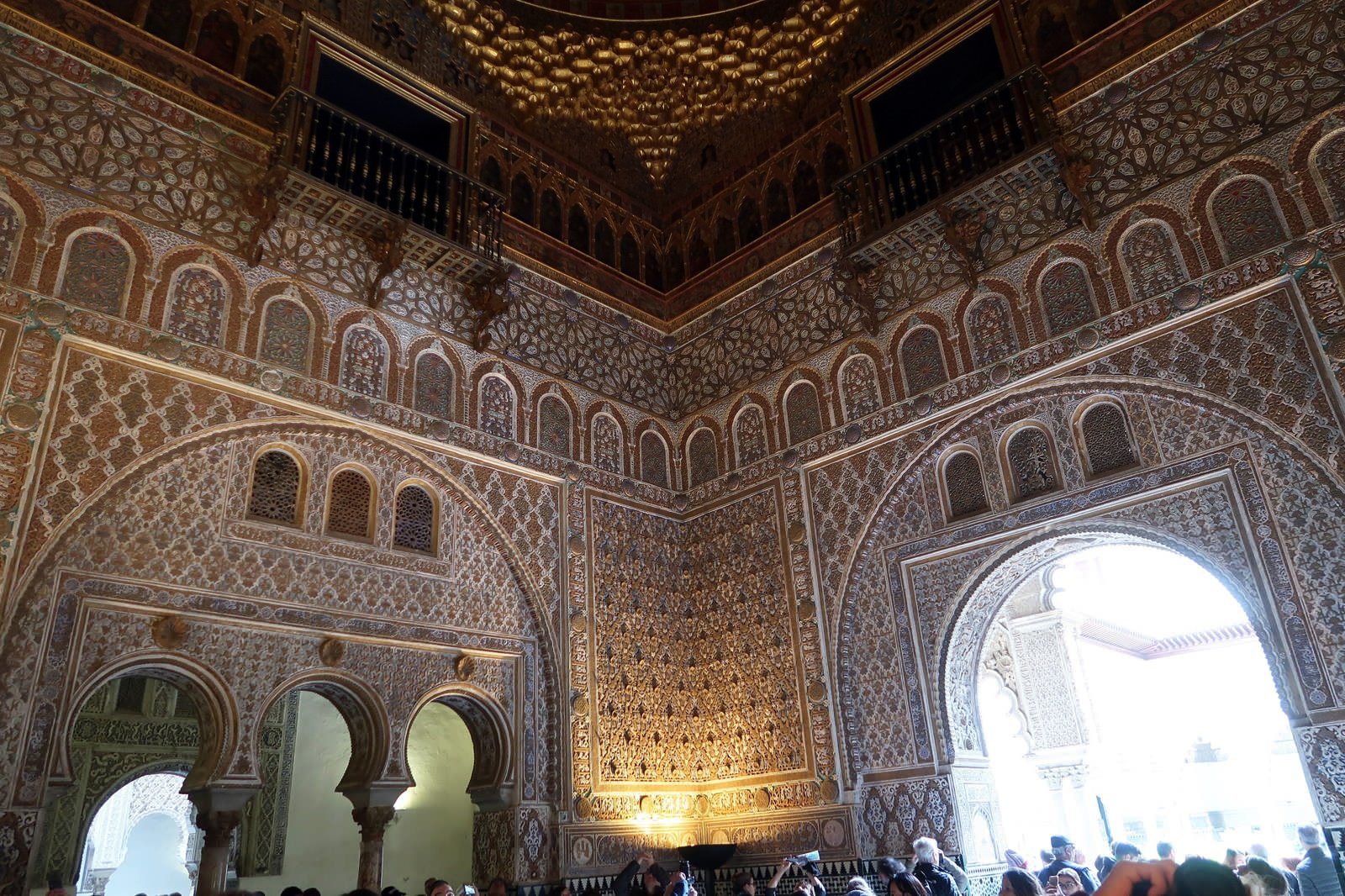 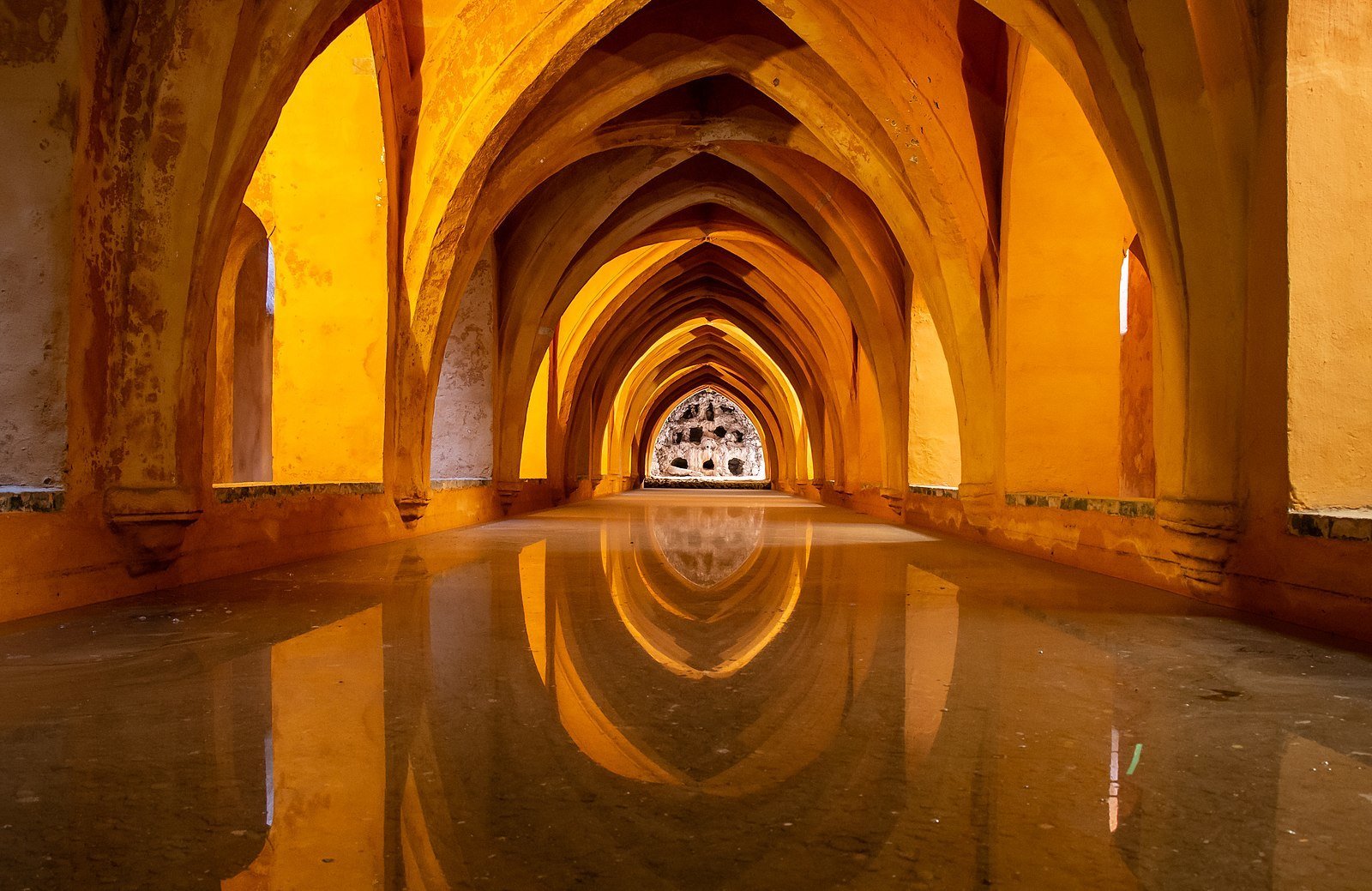 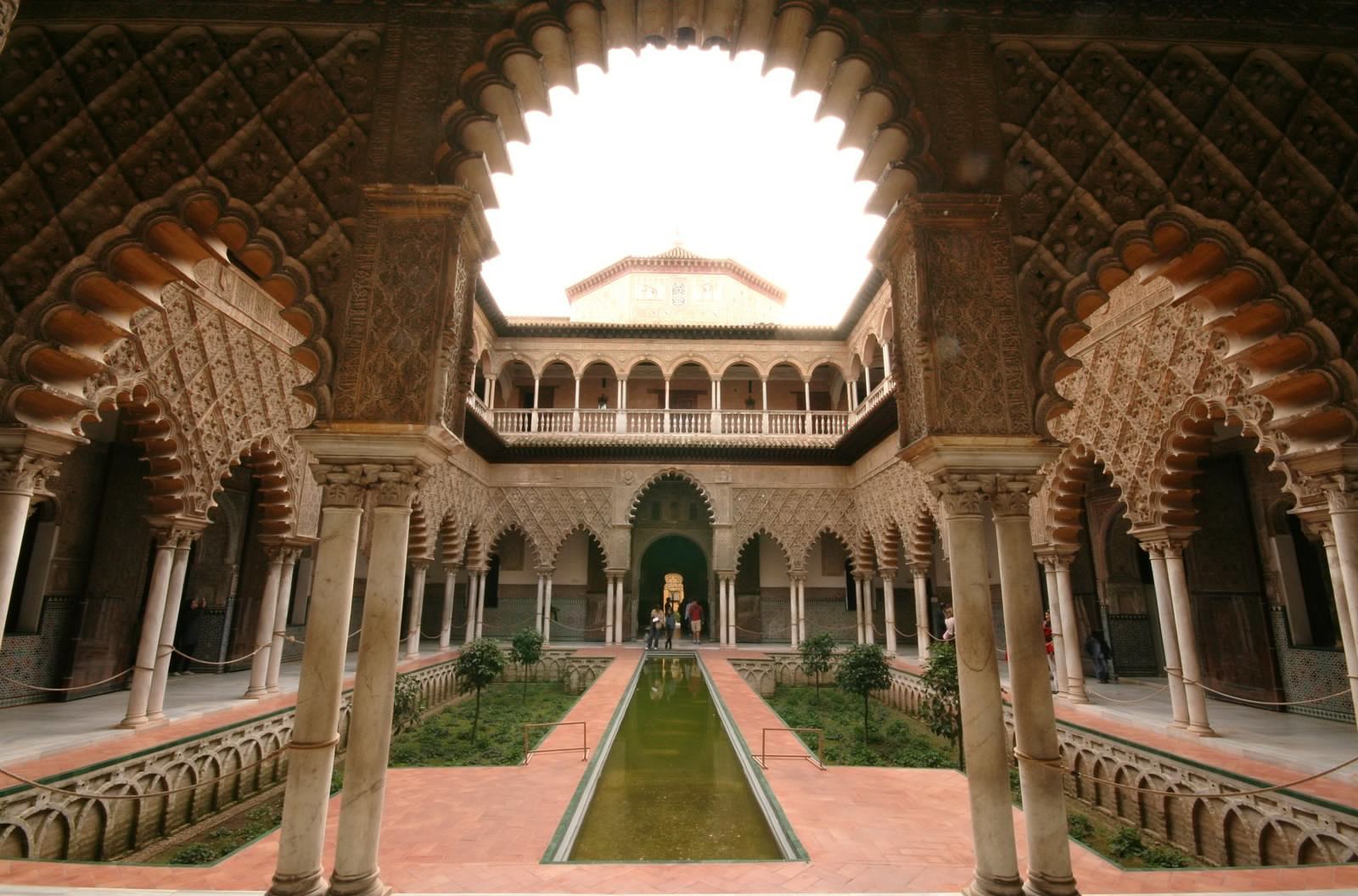 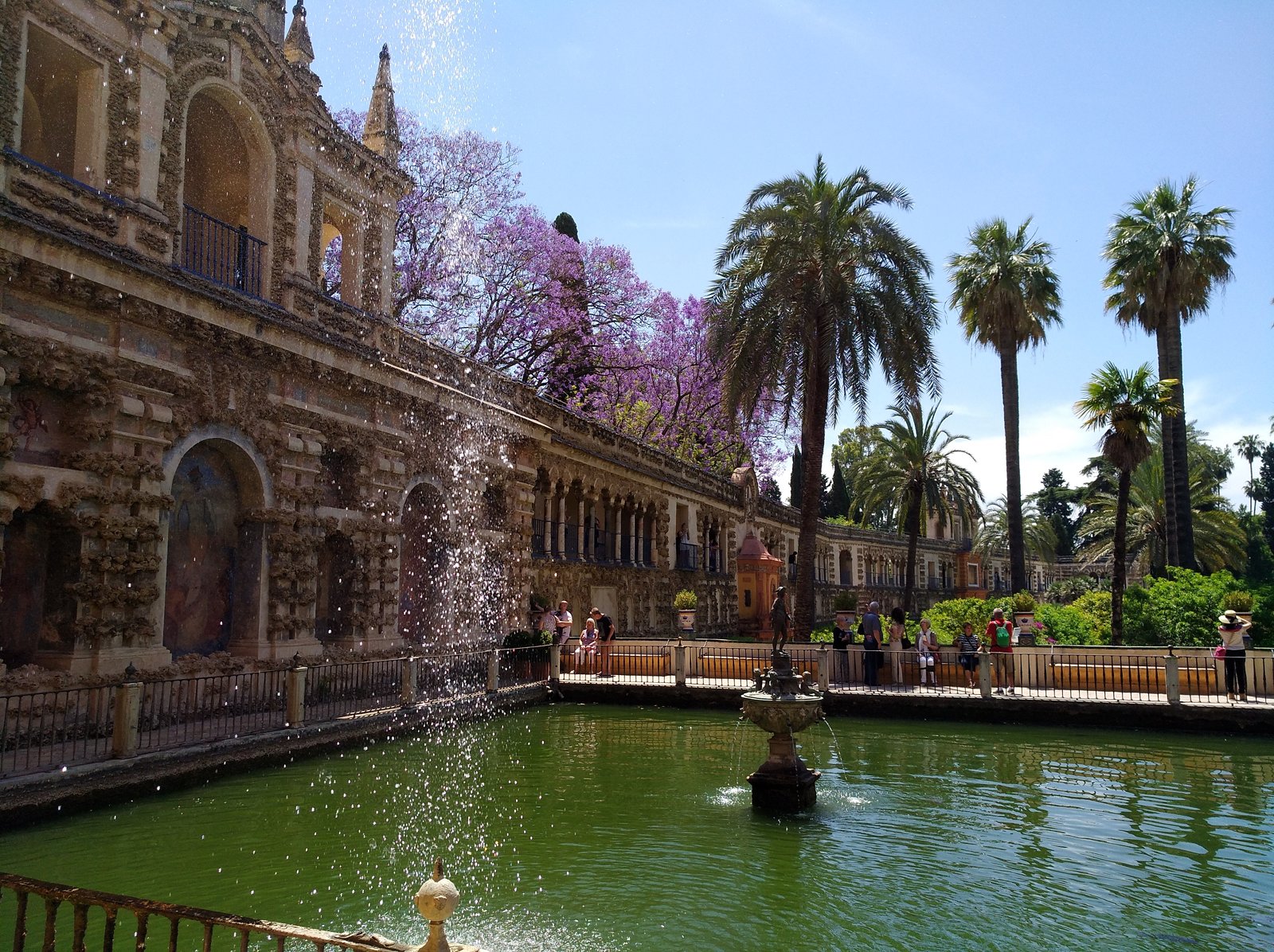 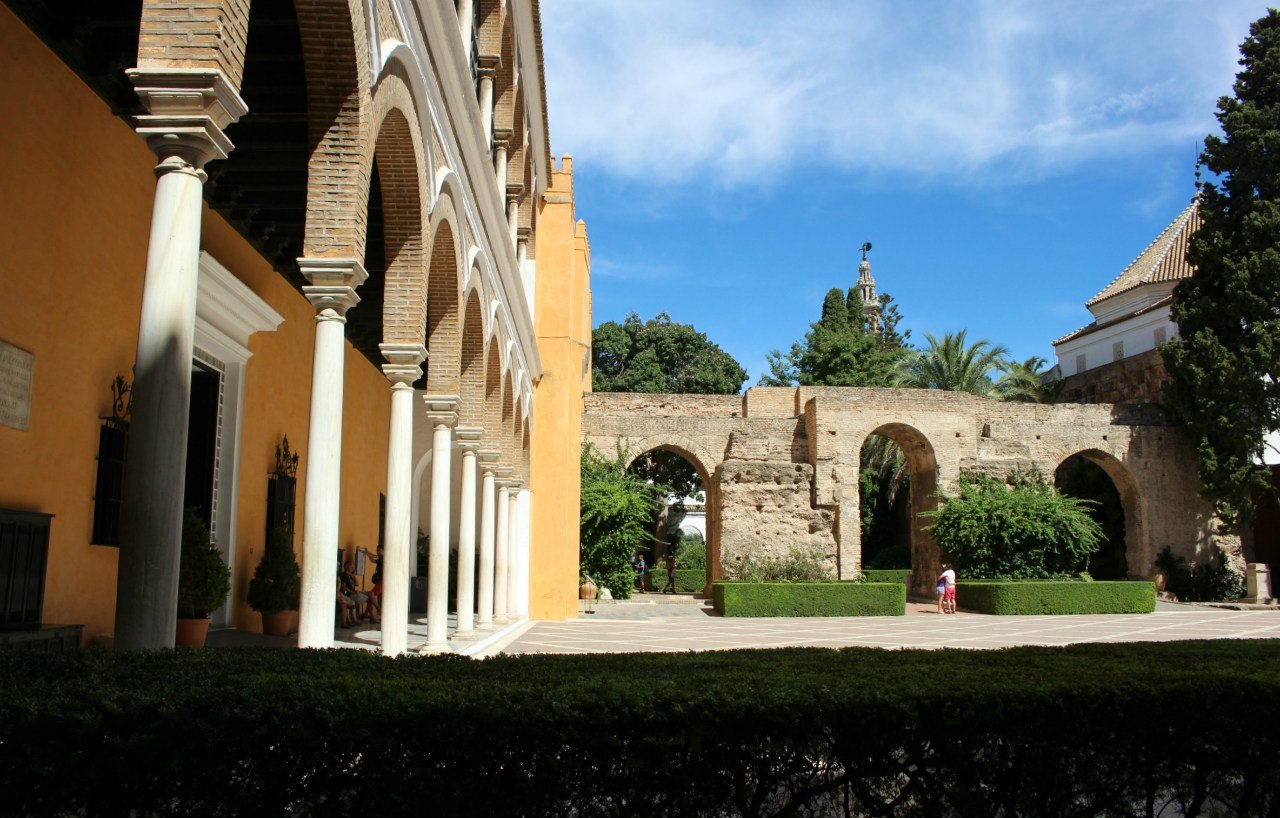 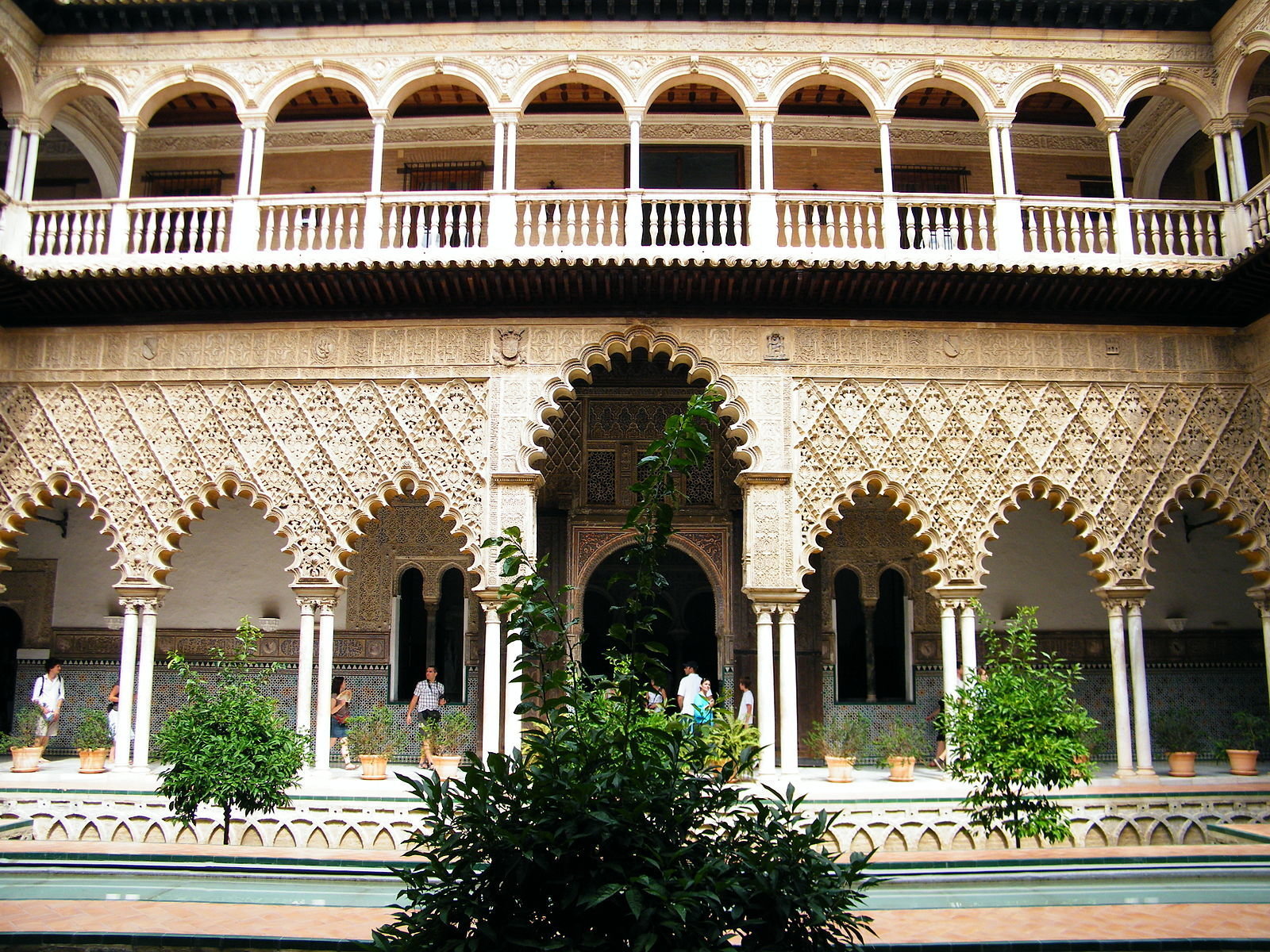 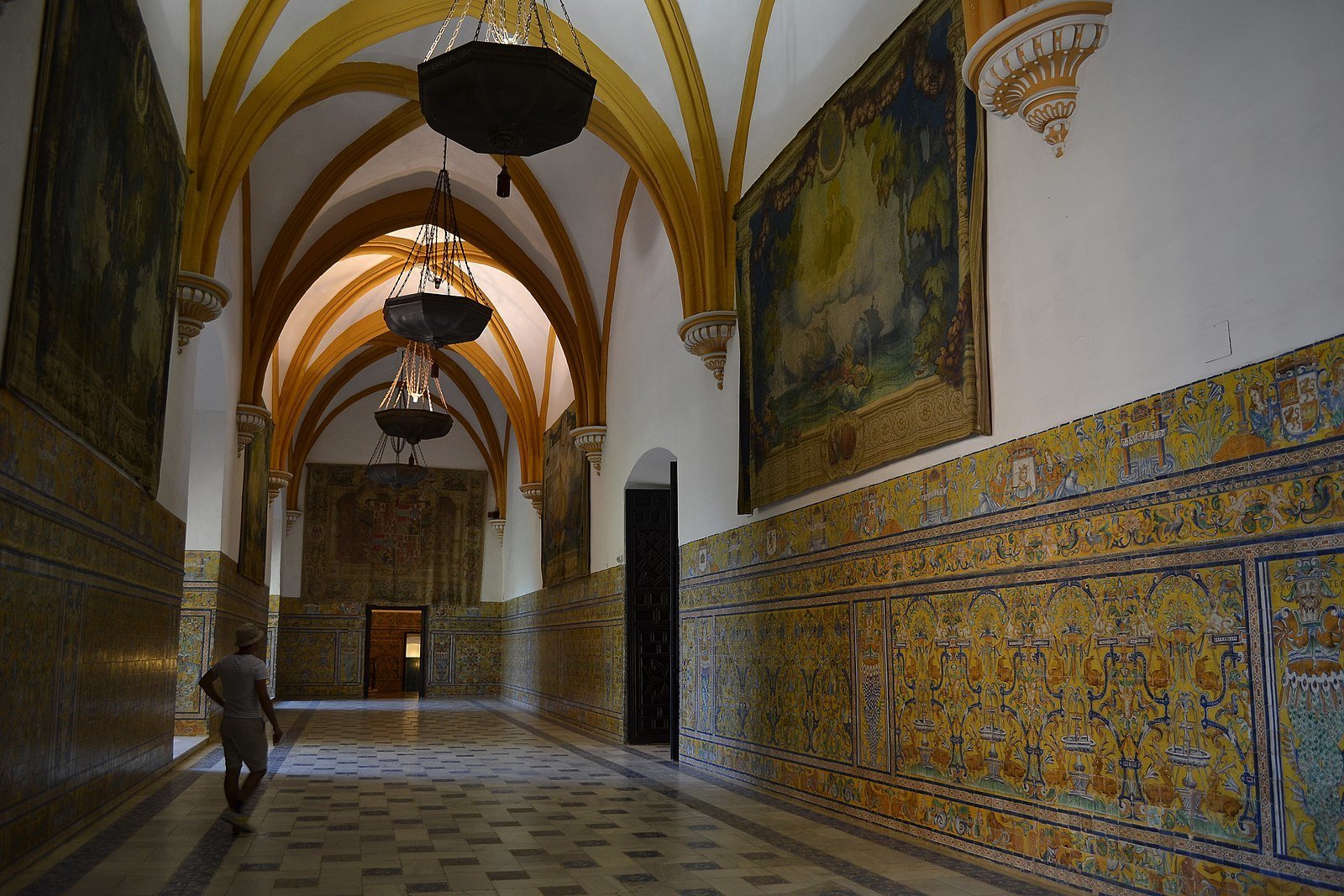 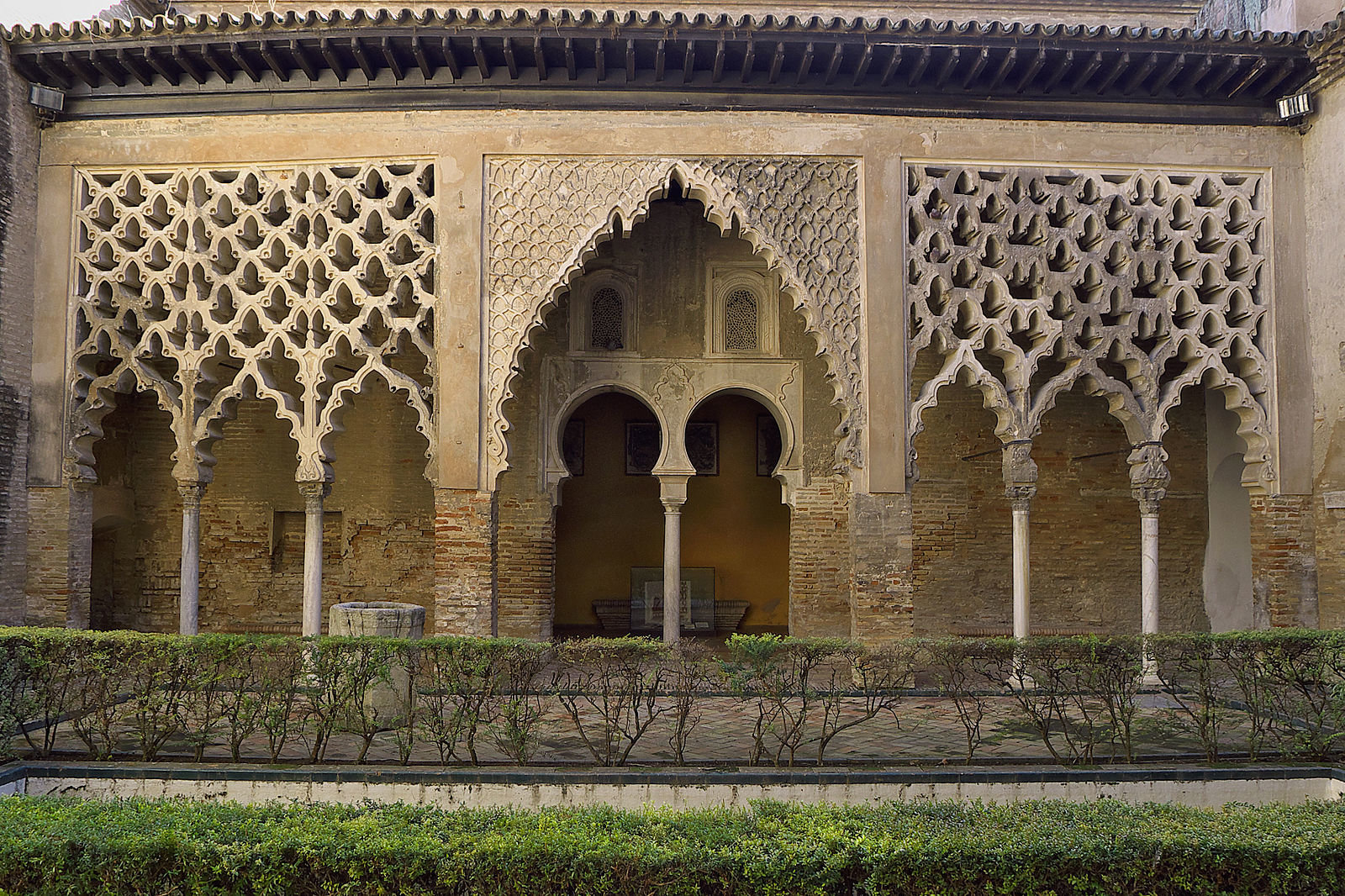