×
What are you looking for?
See all results
Mausoleums in Al Madinah 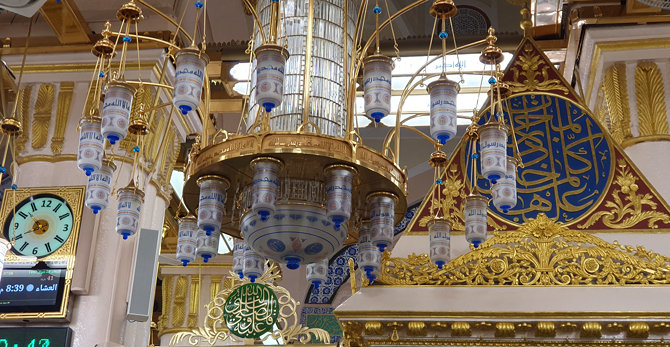 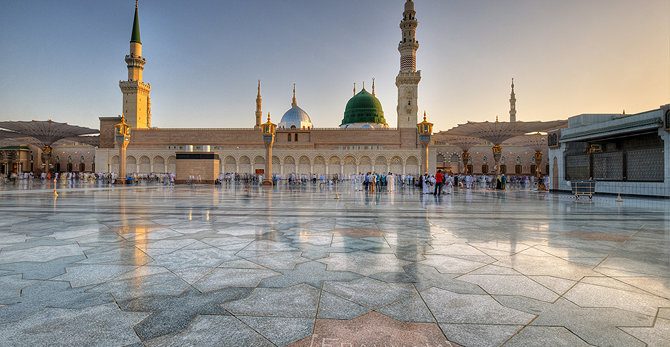 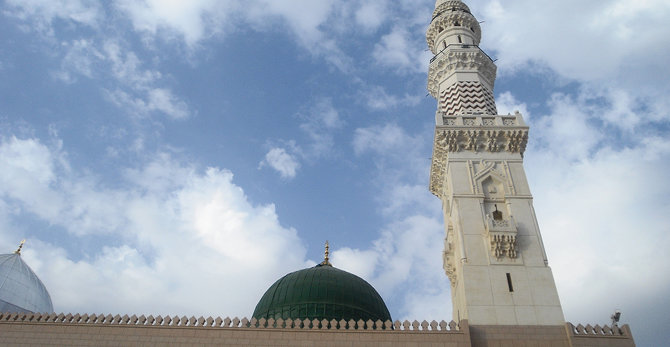 The original mosque was built by Prophet Muhammad. Subsequent Islamic rulers greatly expanded and decorated it. Early Muslim leaders Abu Bakr and Umar are buried in an adjacent area in the mosque.

The edifice was originally Prophet Muhammad's house; he settled there after his Hijra (emigration) to Medina, later building a mosque on the grounds. He himself shared in the heavy work of construction. The original mosque was an open-air building. The basic plan of the building has been adopted in the building of other mosques throughout the world.

The mosque also served as a community center, a court, and a religious school. There was a raised platform for the people who taught the Qur'an.

Шаблон:Refimprovesect The original Mosque was built by Muhammad, next to the house where he settled after his journey to Medina in 622 AD. The original mosque was an open-air building with a raised platform for the reading of the Qur'an. It was a rectangular enclosure of 30x35 meters, built with palm trunks and mud walls, and accessed through three doors: Bab Rahmah to the south, Bab Jibril to the west and Bab al-Nisa' to the east. The basic plan of the building has since been adopted in the building of other mosques throughout the world.

Inside, Muhammad created a shaded area to the south called the suffrah and aligned the prayer space facing north towards Jerusalem. When the qibla (prayer direction) was changed to Mecca, the mosque was re-oriented to the south. The mosque also served as a community center, a court, and a religious school. Seven years later (629 AD/7 AH), the mosque was doubled in size to accommodate the increasing number of Muslims.

Subsequent Islamic rulers continued to enlarge and embellish the Prophet's Mosque over the centuries. In 707, Umayyad Caliph Al-Walid ibn Abd al-Malik (705-715) replaced the old structure and built a larger one in its place, incorporating the tomb of Muhammad. This mosque was 84 by 100 meters in size, with stone foundations and a teak roof supported on stone columns. The mosque walls were decorated with mosaics by Coptic and Greek craftsmen, similar to those seen in the Umayyad Mosque in Damascus and the Dome of the Rock in Jerusalem (built by the same caliph). The courtyard was surrounded by a gallery on four sides, with four minarets on its corners. A mihrab topped by a small dome was built on the qibla wall.

Abbasid Caliph al-Mahdi (775-785) replaced the northern section of Al-Walid's mosque between 778 and 781 to enlarge it further. He also added 20 doors to the mosque: eight on each of the east and west walls, and four on the north wall.

of the Holy Prophet]]

During the reign of the Mamluk Sultan Qalawun, a dome was erected above tomb of the Prophet and an ablution fountain was built outside of Bab al-Salam. Sultan Al-Nasir Muhammad rebuilt the fourth minaret that had been destroyed earlier. After a lightning strike destroyed much of the mosque in 1481, Sultan Qaitbay rebuilt the east, west and qibla walls.

The Ottoman sultans who controlled Medina from 1517 until World War I also made their mark. Sultan Suleiman the Magnificent (1520-1566) rebuilt the western and eastern walls of the mosque and built the northeastern minaret known as al-Suleymaniyya. He added a new mihrab (al-Ahnaf) next to prophet Muhammad's mihrab (al-Shafi'iyyah) and placed a new dome covered in lead sheets and painted green above the Prophet's house and tomb.

During the reign of Ottoman Sultan Abdülmecid (1839-1861), the mosque was entirely remodeled with the exception of Muhammad's Tomb, the three mihrabs, the minbar and the Suleymaniyya minaret. The precinct was enlarged to include an ablution area to the north. The prayer hall to the south was doubled in width and covered with small domes equal in size except for domes covering the mihrab area, Bab al-Salam and Muhammad's Tomb. The domes were decorated with Qur'anic verses and lines from Qaṣīda al-Burda (Poem of the Mantle), the famous poem by 13th century Arabic poet Busiri. The qibla wall was covered with glazed tiles featuring Qur'anic calligraphy. The floors of the prayer hall and the courtyard were paved with marble and red stones and a fifth minaret (al-Majidiyya), was built to the west of the enclosure.

After the foundation of the Kingdom of Saudi Arabia in 1932, the Mosque of prophet Muhammad underwent several major modifications. In 1951 King Ibn Saud (1932-1953) ordered demolitions around the mosque to make way for new wings to the east and west of the prayer hall, which consisted of concrete columns with pointed arches. Older columns were reinforced with concrete and braced with copper rings at the top. The Suleymaniyya and Majidiyya minarets were replaced by two minarets in Mamluk revival style. Two additional minarets were erected to the northeast and northwest of the mosque. A library was built along the western wall to house historic Qur'ans and other religious texts.

In 1973 Saudi King Faisal bin Abdul Aziz ordered the construction of temporary shelters to the west of the mosque to accommodate the growing number of worshippers in 1981, the old mosque was surrounded by new prayer areas on these sides, enlarging five times its size.

The latest renovations took place under King Fahd and have greatly increased the size of the mosque, allowing it to hold a large number of worshippers and pilgrims and adding modern comforts like air conditioning. He also installed twenty seven moving domes at the roof of Masjid Nabawi.

Шаблон:Refimprovesect ]] As it stands today, the Prophet's Mosque has a rectangular plan on two floors with the Ottoman prayer hall projecting to the south. The main prayer hall occupies the entire first floor. The mosque enclosure is 100 times bigger than the first mosque built by the Prophet and can accommodate more than half a million worshippers.

The Prophet's Mosque has a flat paved roof topped with 24 domes on square bases. Holes pierced into the base of each dome illuminate the interior. The roof is also used for prayer during peak times, when the 24 domes slide out on metal tracks to shade areas of the roof, creating light wells for the prayer hall. At these times, the courtyard of the Ottoman mosque is also shaded with umbrellas affixed to freestanding columns. The roof is accessed by stairs and escalators. The paved area around the mosque is also used for prayer, equipped with umbrella tents.

The north facade has three evenly spaced porticos, while the east, west and south facades have two. The walls are composed of a series of windows topped by pointed arches with black and white voussoirs. There are six peripheral minarets attached to the new extension, and four others frame the Ottoman structure. The mosque is lavishly decorated with polychrome marble and stones. The columns are of white marble with brass capitals supporting slightly pointed arches, built of black and white stones. The column pedestals have ventilation grills that regulate the temperature inside the prayer hall.

This shiny new Prophet's Mosque contains the older mosque within it. The two sections can be easily distinguished: the older section has many colorful decorations and numerous small pillars; the new section is in gleaming white marble and is completely air-conditioned.

The open courtyard of the mosque can be shaded by folded, umbrella-like canopies, designed by Bodo Rash and Buro Happold[1]

The most notable feature of the Prophet's Mosque is the green "Dome of the Prophet", which rises higher amongst the sea of white domes. This is where the tomb of Muhammad is located; early Muslim leaders Abu Bakr and Umar ibn al-Khattab are buried in an adjacent area as well.

The heart of the mosque houses a very special but small area named ar-Rawdah an-Nabawiyah, which extends from Muhammad's tomb to his pulpit. Pilgrims attempt to visit and pray in ar-Rawdah, for there is a tradition that supplications and prayers uttered here are never rejected. Entrance into ar-Rawdah is not always possible (especially during the Hajj season), as the tiny area can accommodate only a few hundred people. Ar-Rawdah has two small gateways manned by Saudi police officers. The current marble pulpit was constructed by the Ottomans. The original pulpit was much smaller than the current one, and constructed of palm tree wood, not marble. Ar-Rawdah an-Nabawiyah is considered part of Jannah (Heaven or Paradise).

Saudi expansion of the Mosque

The original mosque was not very large, and today the original exists only as a small portion of the larger mosque. From 1925, after Medina surrendered to Ibn Sa'ud, the mosque was gradually expanded until 1955 when extensive renovations were carried out. The latest renovations took place under King Fahd and have greatly increased the size of the mosque, allowing it to hold a large number of worshippers and pilgrims. It is also completely air conditioned and decorated with marble.

The newer and older sections of the mosque are quite distinct. The older section has many colorful decorations and numerous small pillars.

The mosque is located in what was traditionally the center of Medina, with many hotels and old markets nearby. It is a major pilgrimage site and many people who perform the Hajj go on to Medina before or after Hajj to visit the mosque.

Шаблон:Unreferenced section Current Imams at the Al-Masjid al-Nabawi include:

Шаблон:Unreferenced section Muezzins at the Haram Sharif include:

See all hotels See all
The Oberoi Madina

The Tomb of Abdullah Shah Ghazi, is located at perched on a hilltop 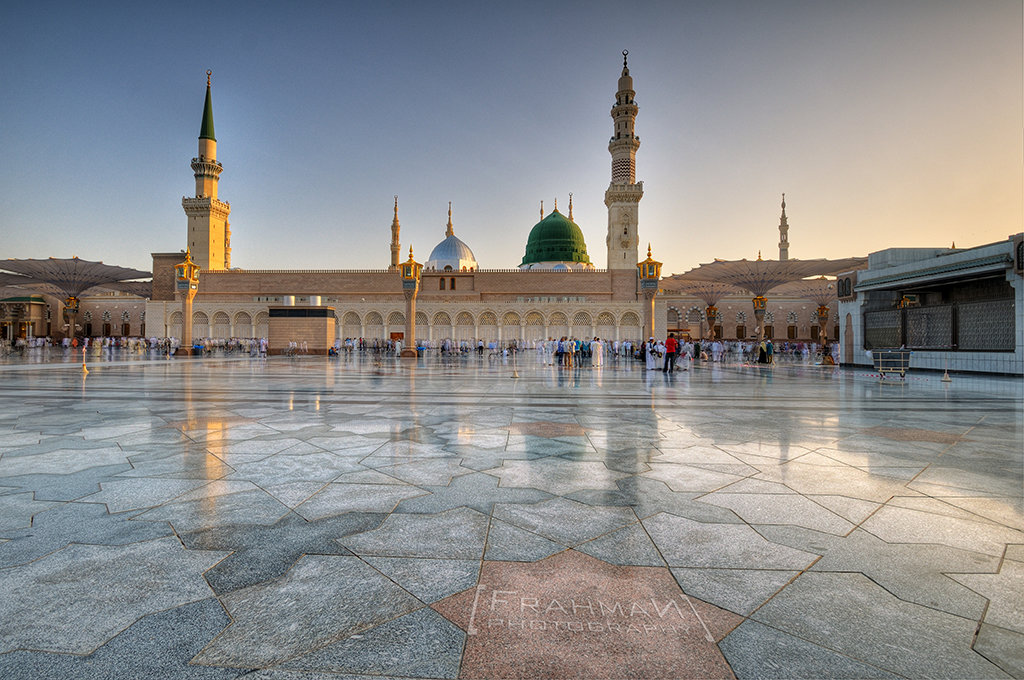 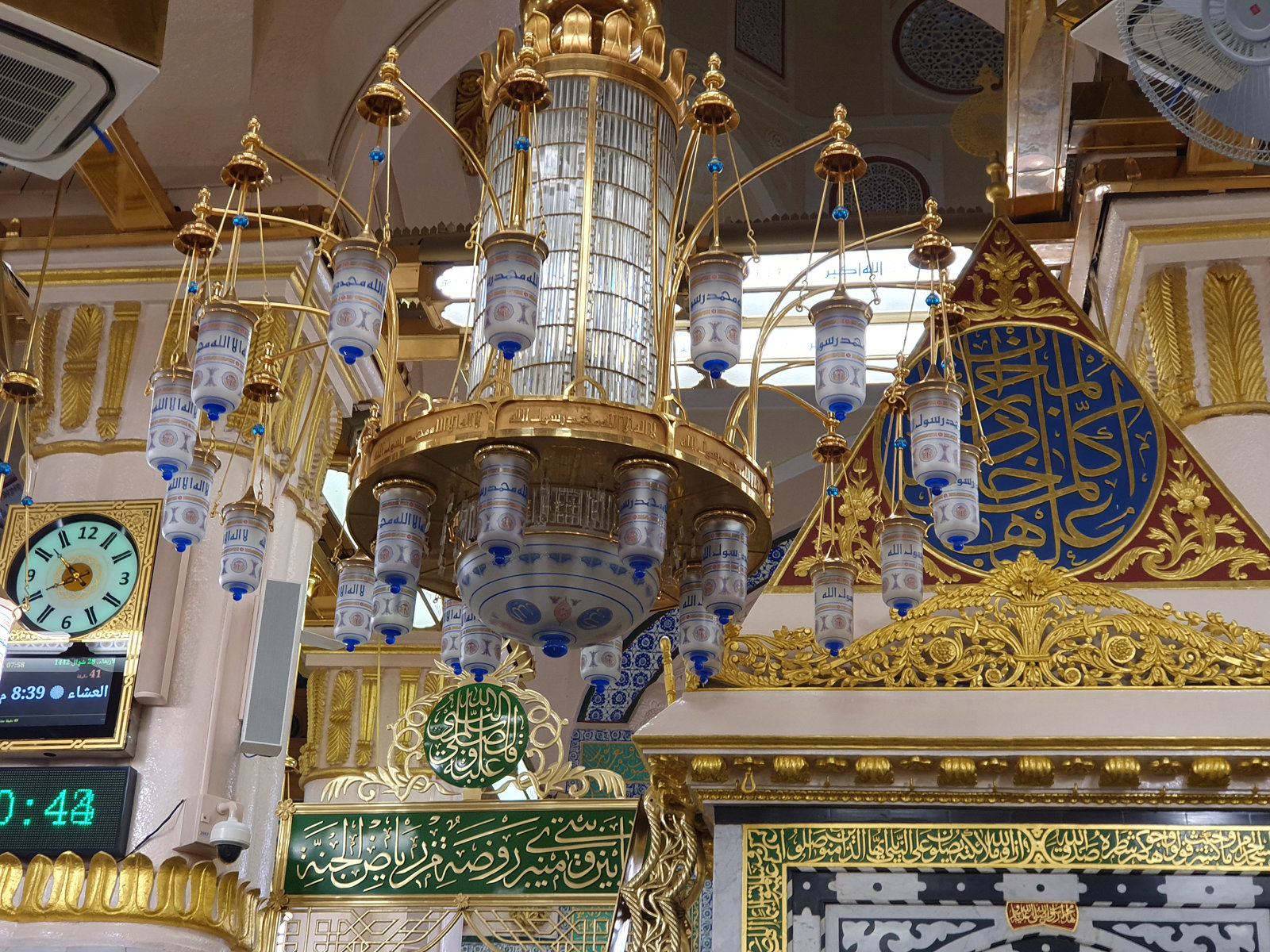 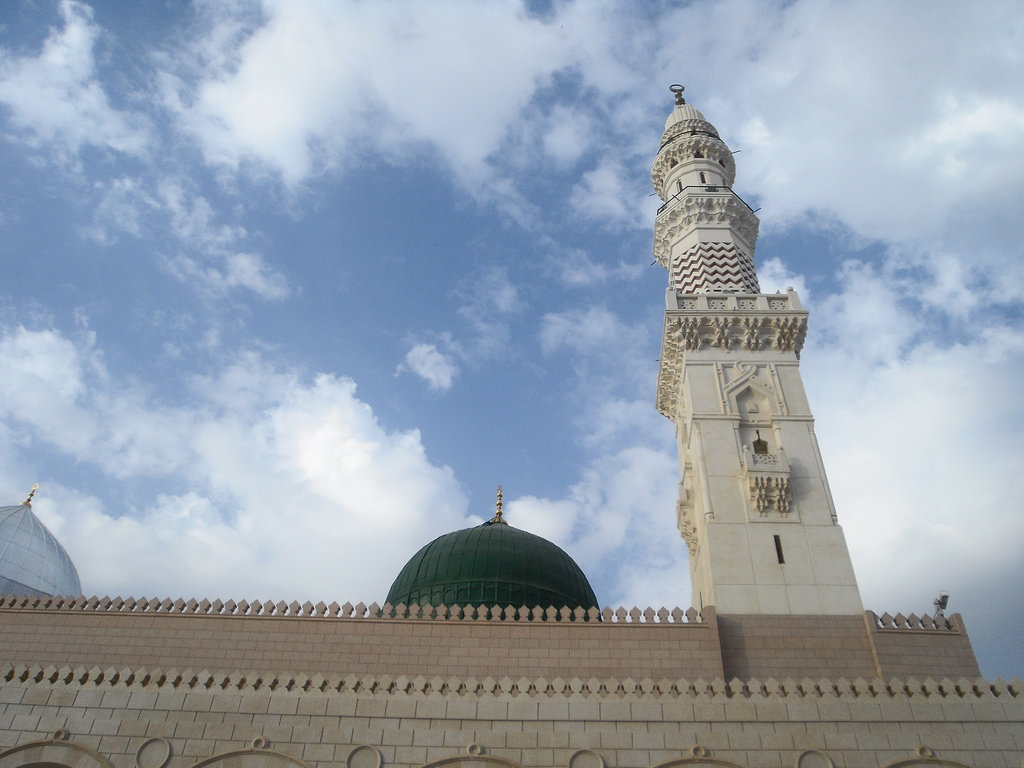 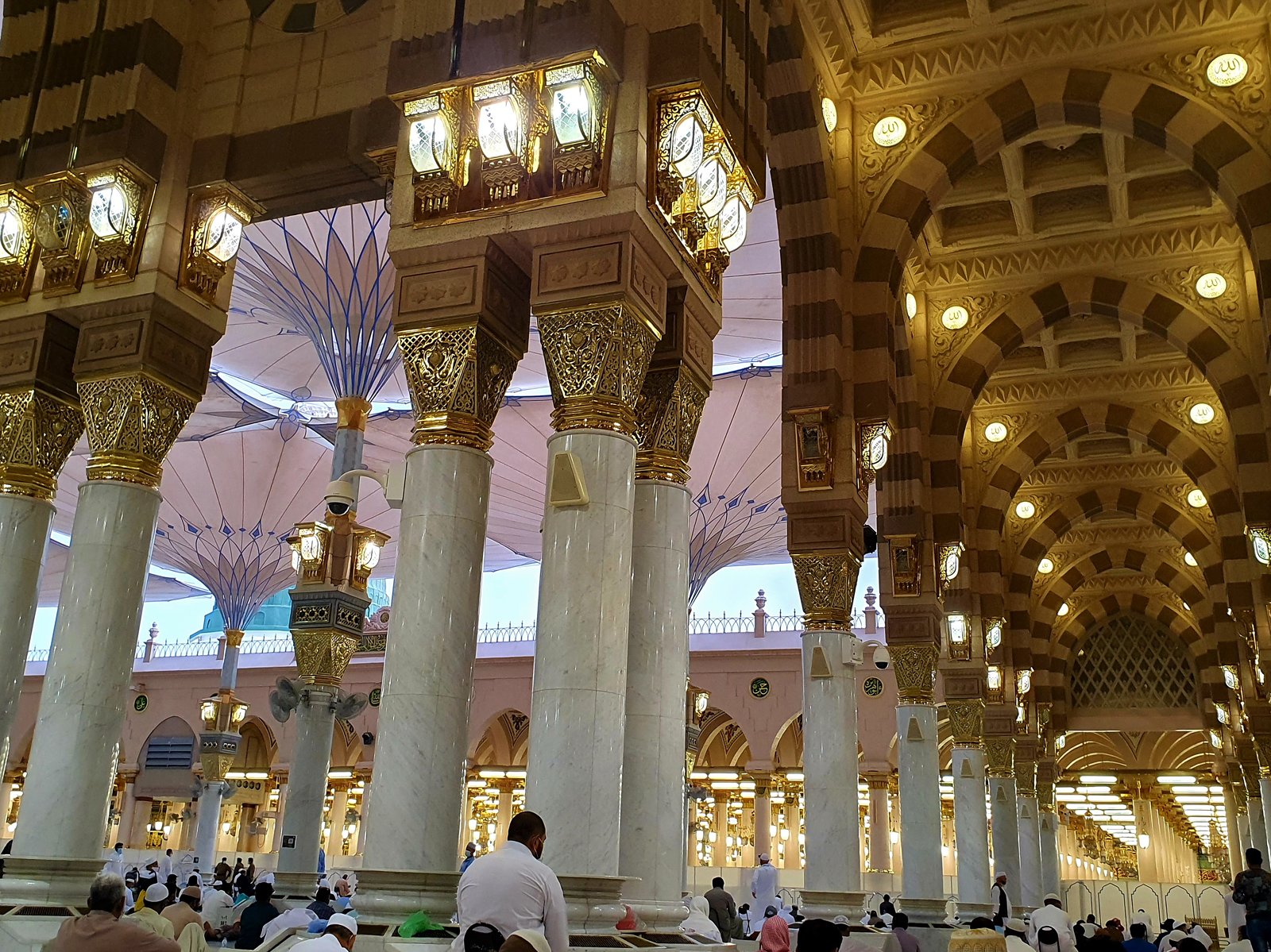 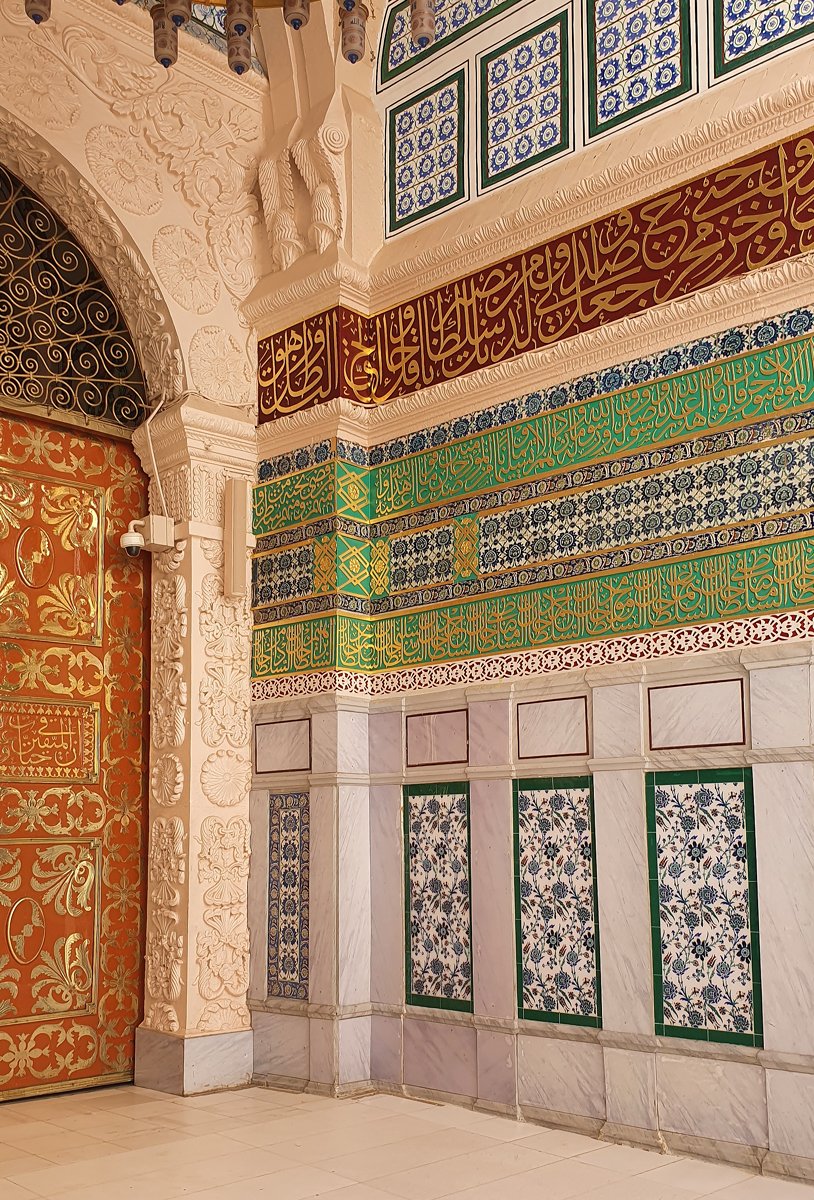 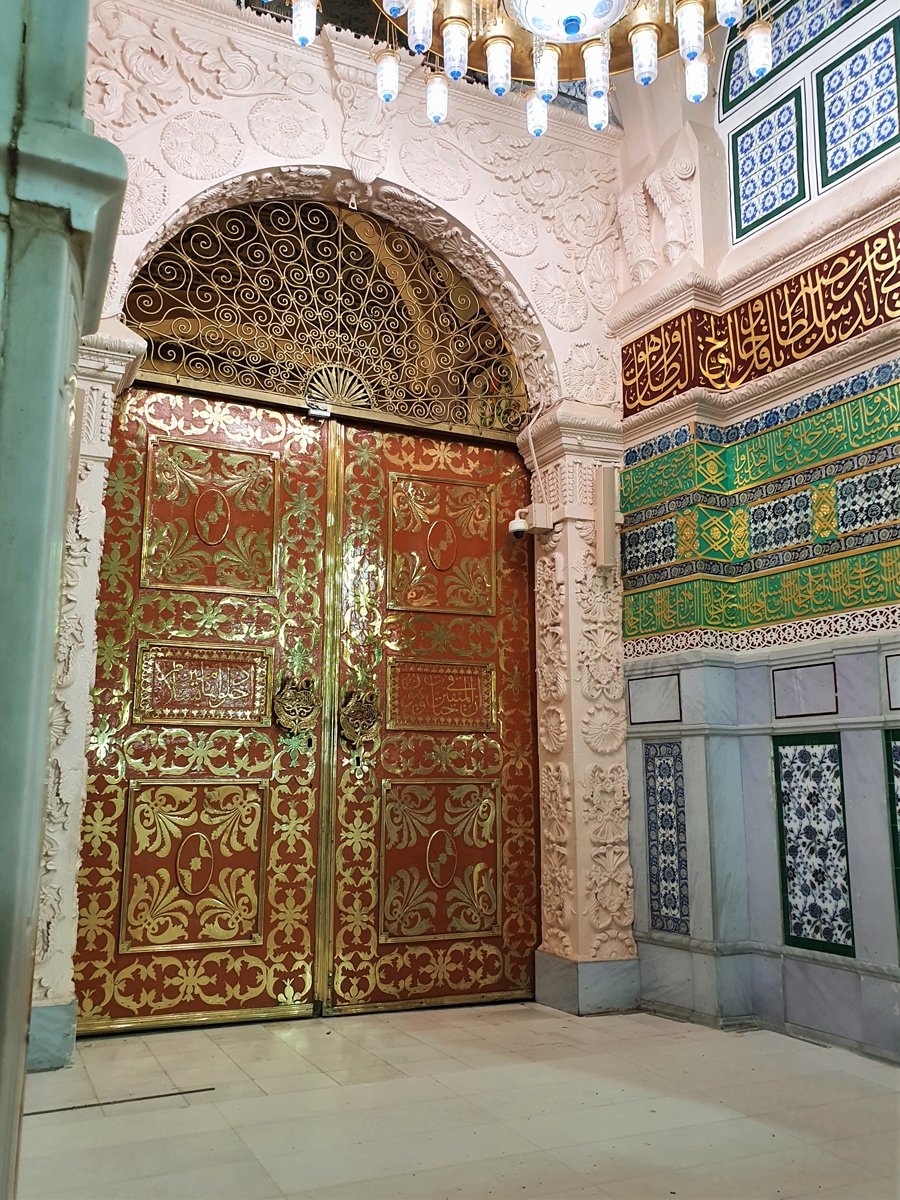